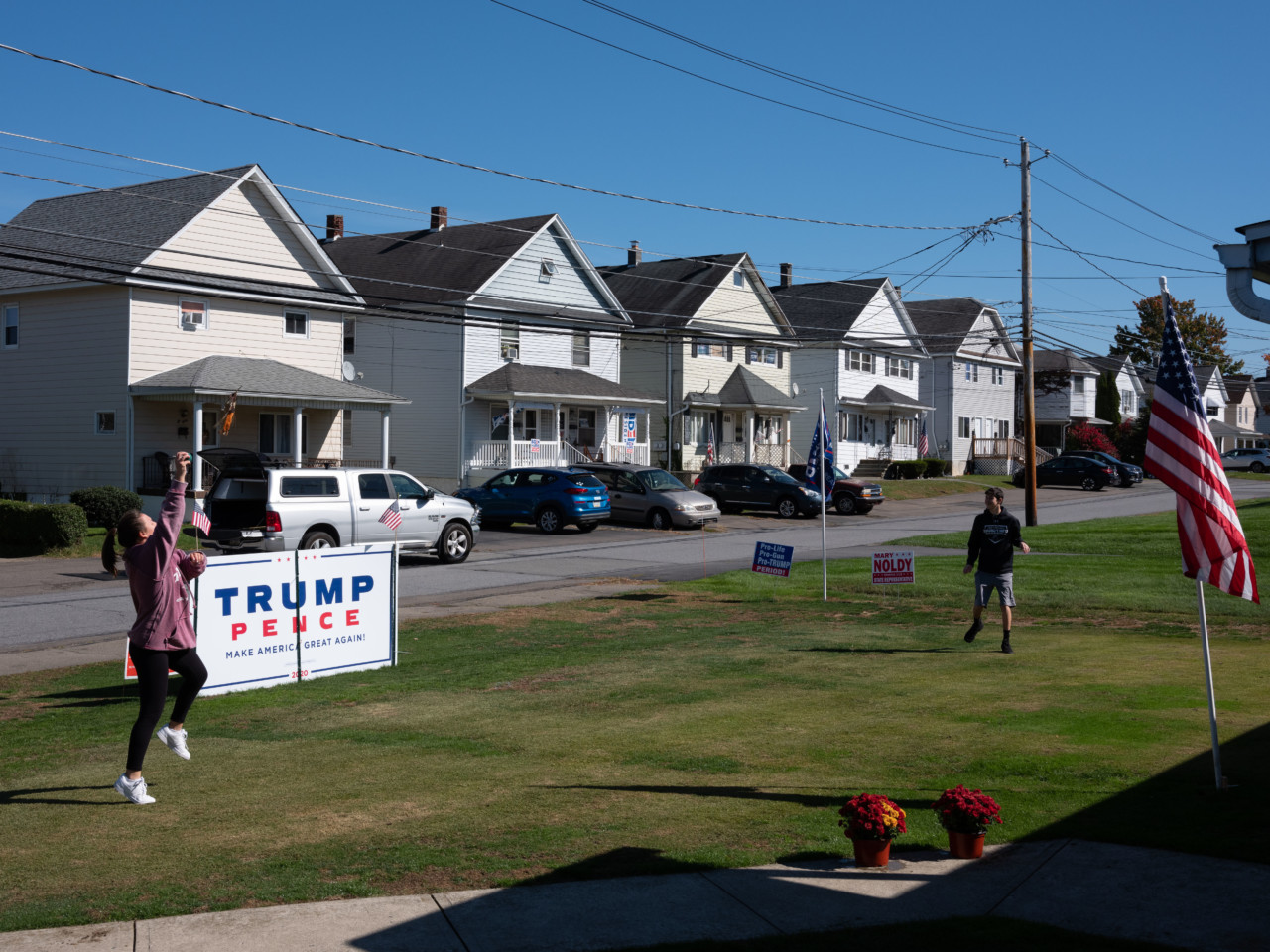 Libération recently published a pair of articles providing an insight into the lead-up to the US presidential election, featuring reportage on areas that will be key to deciding the outcome of the vote. Peter van Agtmael was on assignment in the borough of Olyphant and the city of Wilkes-Barre, both in Pennsylvania. Read the articles in French, here and here. You can see more work from the paper’s ongoing collaboration with van Agtmael weekly in the print edition of the newspaper, until November 5. 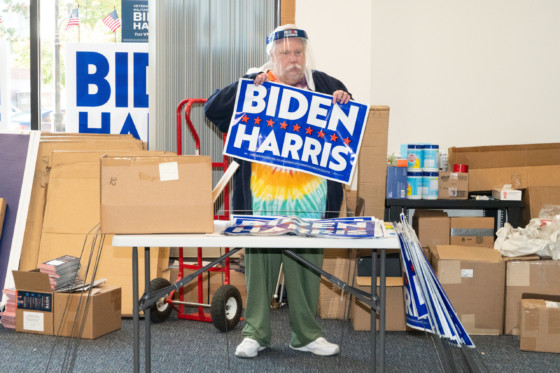 Le Monde has also shared a special supplement to its newspaper which features a portfolio of van Agtmael’s works from the past year, from the beginnings of the Covid-19 pandemic to the summer’s Black Lives Matter protests, the growth of far-right groups including the Proud Boys, and more recent electoral rallies. The piece provides a broad view of the political landscape in the US in the lead-up to the 2020 election. See the work in the October 18–19, 2020 print issue, as well as online here. 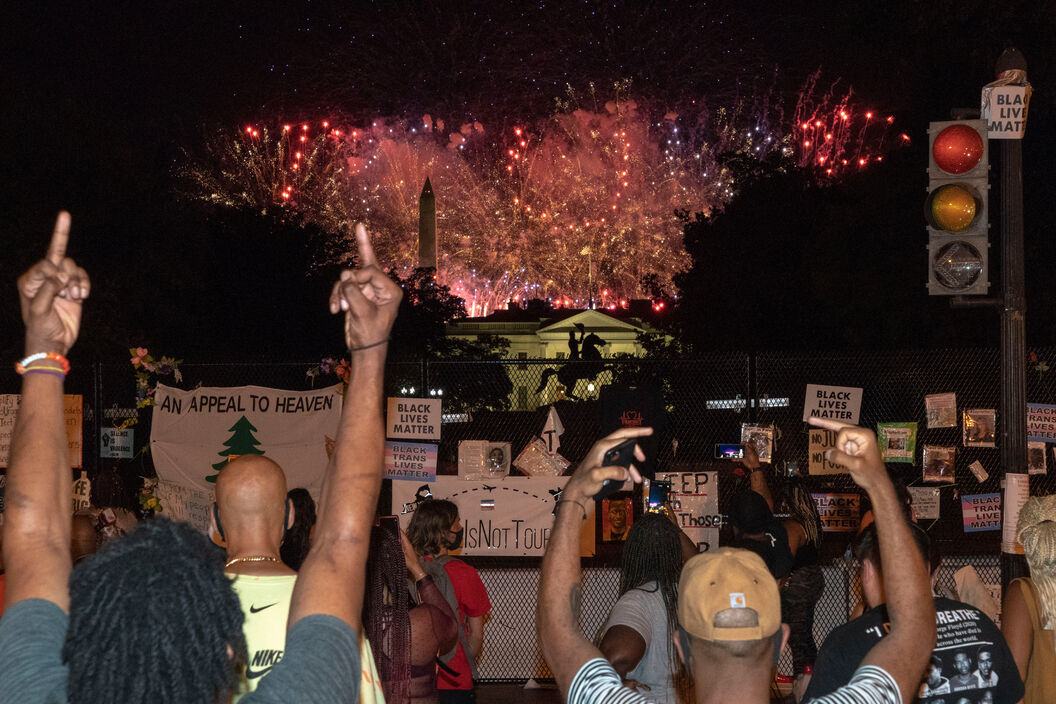 Lorenzo Meloni in Nagorno-Karabakh for L’Obs and De Standaard

L’Obs has published a photo essay featuring Lorenzo Meloni’s images of a war-torn Nagorno-Karabakh. Conflict between Armenians and Azeris resumed in the region in September as a result of sustained tensions between the two groups. Read the feature and see Meloni’s images in the October 22 print edition of the magazine and online here. 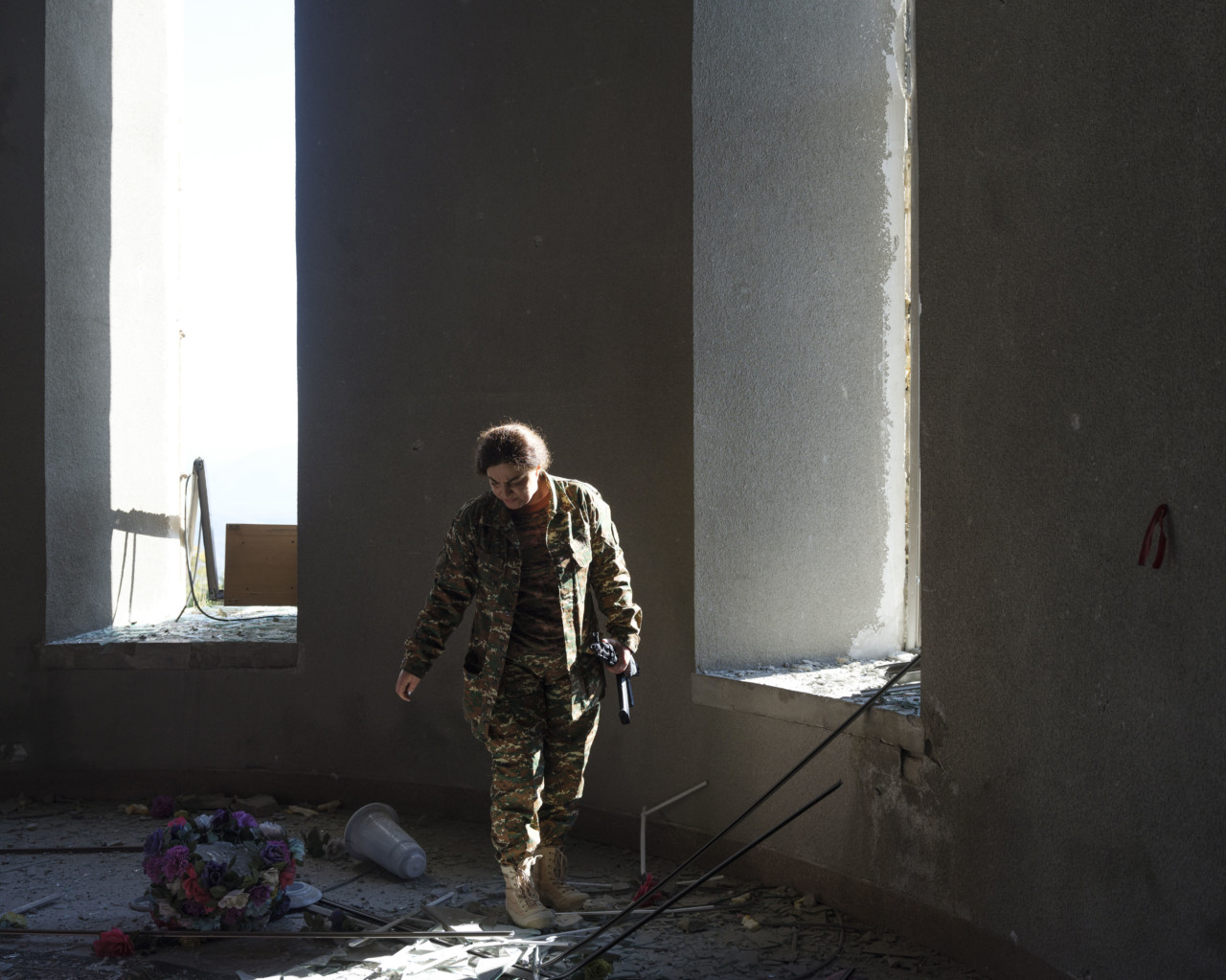 Meloni’s work also featured in De Standaard on the weekend. The portfolio features aerial photography of air strikes in the region, as well as coverage of Armenian forces on the ground, and life for civilians who are trying to survive the conflict. 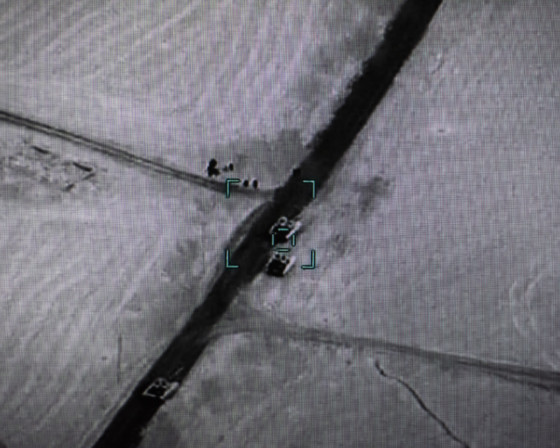 i-D, The Cut, and Wonderland have all included images from Alec Soth’s newest campaign for Gucci. The shoot involved production crews, farm animals, their handlers, and electrical wiring entering the images (in which the design team themselves were the models), in order to create a behind-the-scenes effect. See the images on i-D here, The Cut here, and Wonderland here. 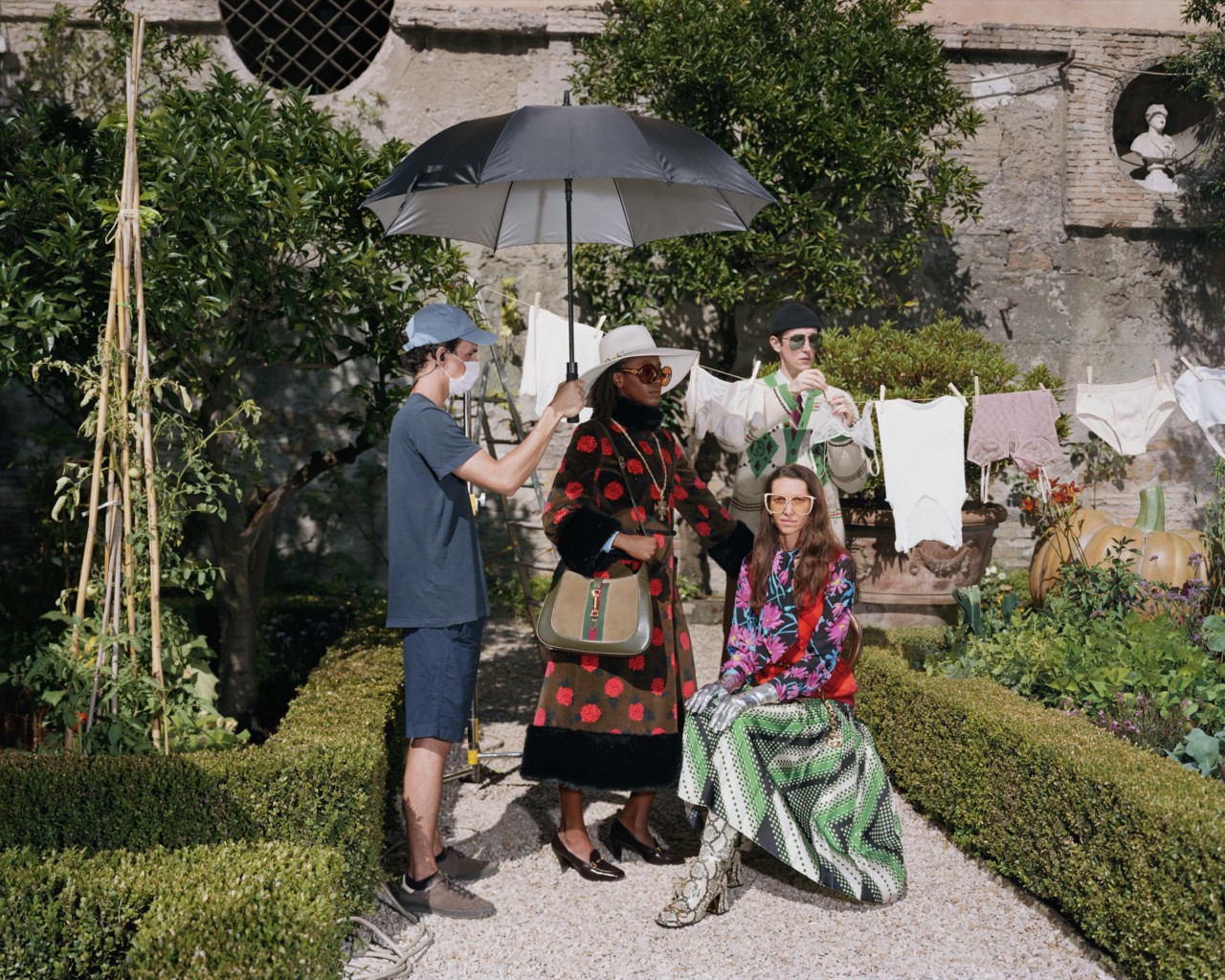 Leica Fotografie International has featured a portfolio of the works of Micha Bar-Am, in celebration of the photographer’s 90th birthday this month, over a 20-page feature including a written profile, plus the magazine’s front cover. “For many decades, Micha Bar-Am has documented the country’s struggles and aspirations, highs and lows, armed conflicts and everyday life,” writes the publication. See the feature in their October print issue. 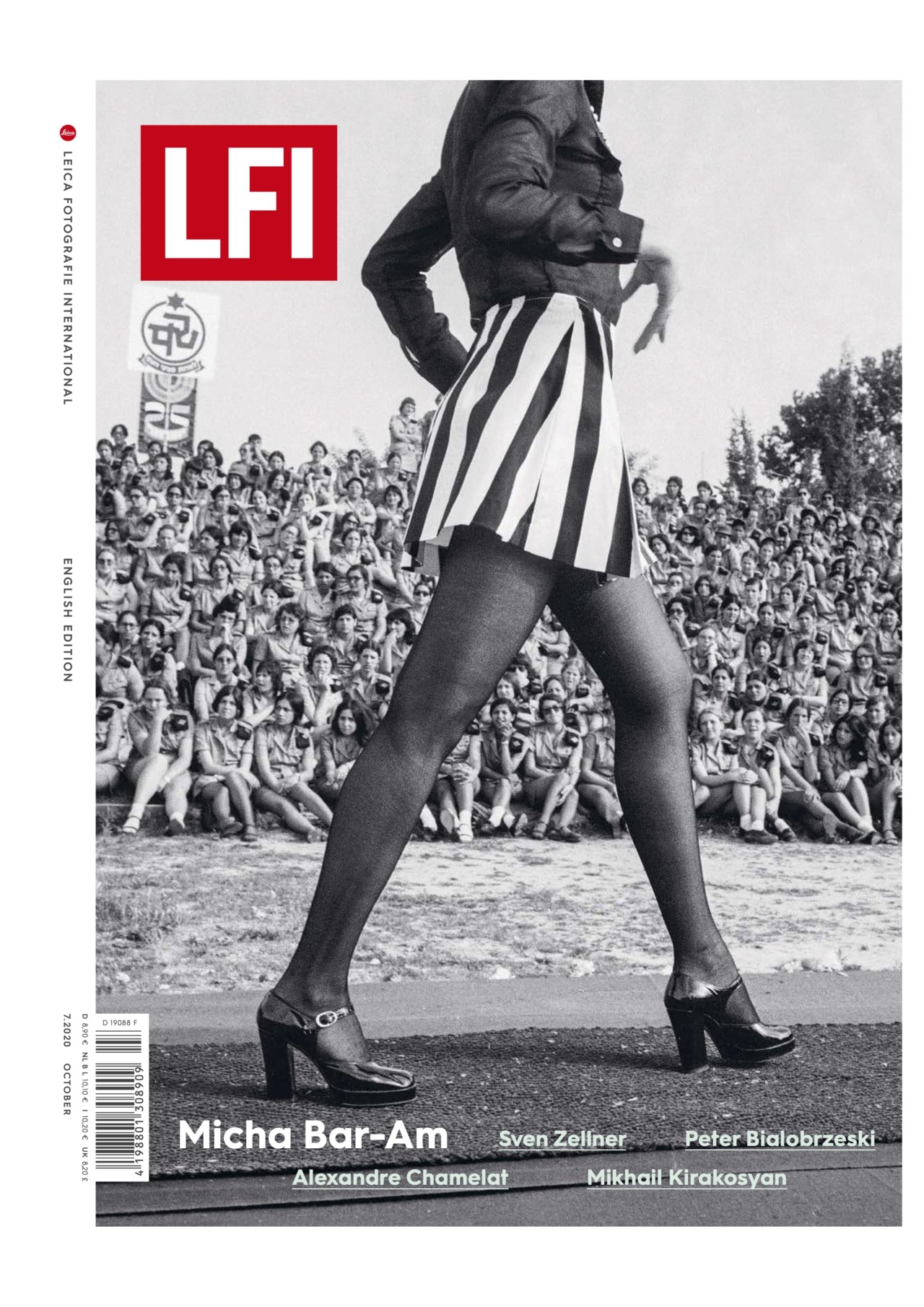 The New York Times has featured a profile on the head of software company Palantir Technologies, Alex Karp, which features portraits by Antoine d’Agata. The company provides data security and processing services for the French government, and claims to have been pivotal in significant counterterrorism actions over recent years. The feature, and d’Agata’s photos, can be found here. Antoine d’Agata Karp taking a break out of his temporary offices. He does at least one hour of hiking in the morning. © Antoine d’Agata | Magnum Photos

The Calvert Journal has spoken to Rafal Milach about his book project, I Am Warning You, which explores the physical and ideological manifestations of state borders. The project consists of three photo series that explore the Berlin Wall, the American-Mexican wall, and the Hungarian-Serbian-Croatian border barrier. See a selection of Milach’s images from the project, which take the form of landscape, architecture, still life photography and more, and read the feature by Diane Smyth, on The Calvert Journal here. Take a more detailed look at the latter project, exploring Hungary’s ‘Orban wall’, on Magnum here. 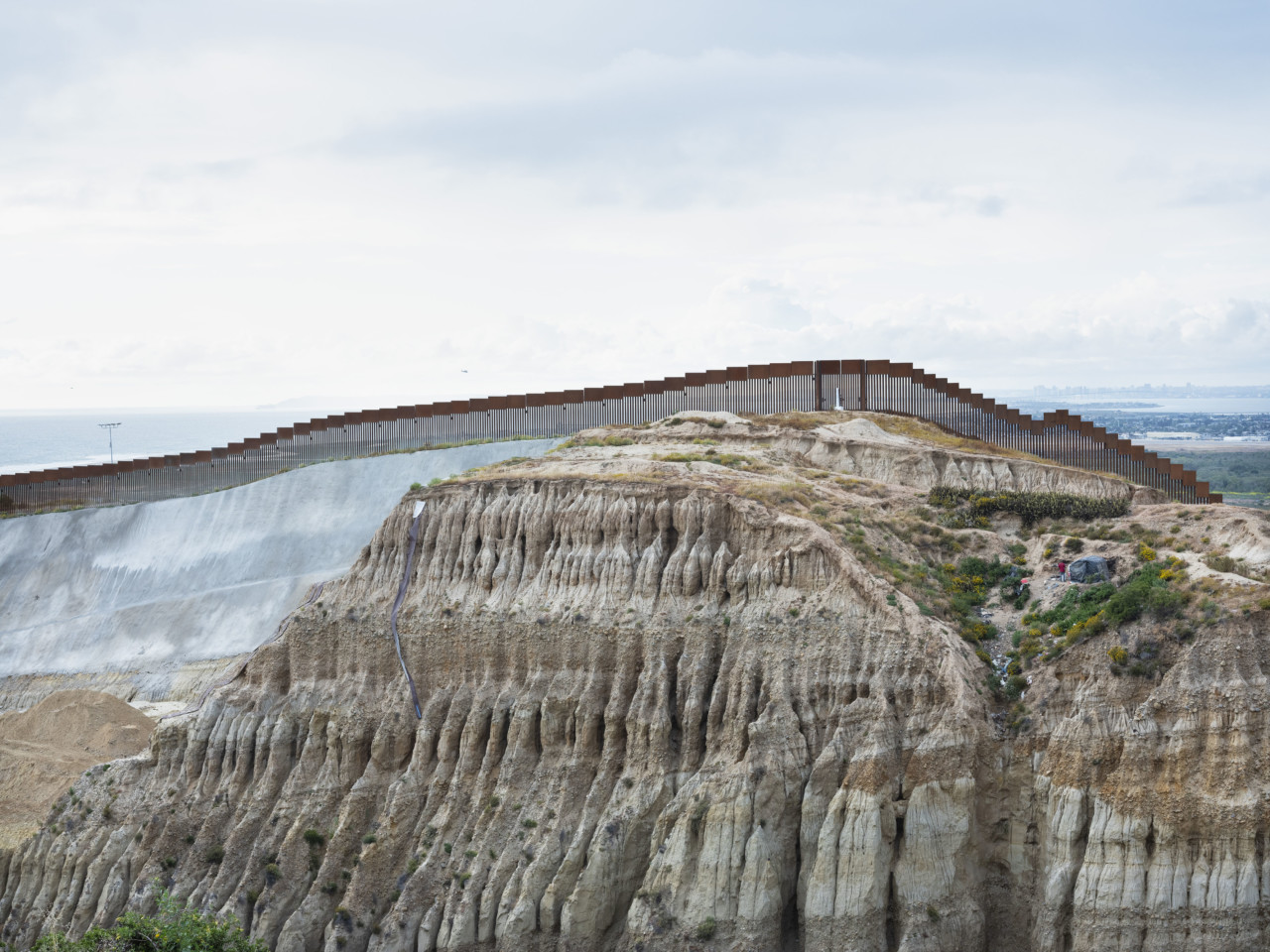 Rafal Milach Improvised shelter by the Mexican - U.S. border wall. On February 23rd 2018, the U.S. Customs and Border Protection Office published The Final Report on Border Wall Mockup and Prototype Test. It pr (...)
esents, amongst other, various breaching and scaling tests of the eight future border wall prototypes proposed by Homeland Security in response to Donald Trump’s Executive Order #13767. The prototypes were nothing else, but a demonstration of power. They were not integrated into the new structure of the border wall that had been gradually replacing the old recycled Vietnam War helicopter landing panels. The project reflects upon the design of geographical and political division. It is dedicated to architecture of control and its impact on local landscape and urban structures. Mexico, Baja California, Tijuana. 05.2019 © Rafal Milach | Magnum Photos

Dutch online magazine The Correspondent, also known as de Correspondent, has published an analysis piece on the three greatest causes of the earth’s increased CO2 production in the past 30 years. The text is accompanied by images from Cristina de Middel and Bruno Morais’ project, Excessocenus, which explored the impact of Western consumption on the environment and people of Mozambique. Read the piece here. 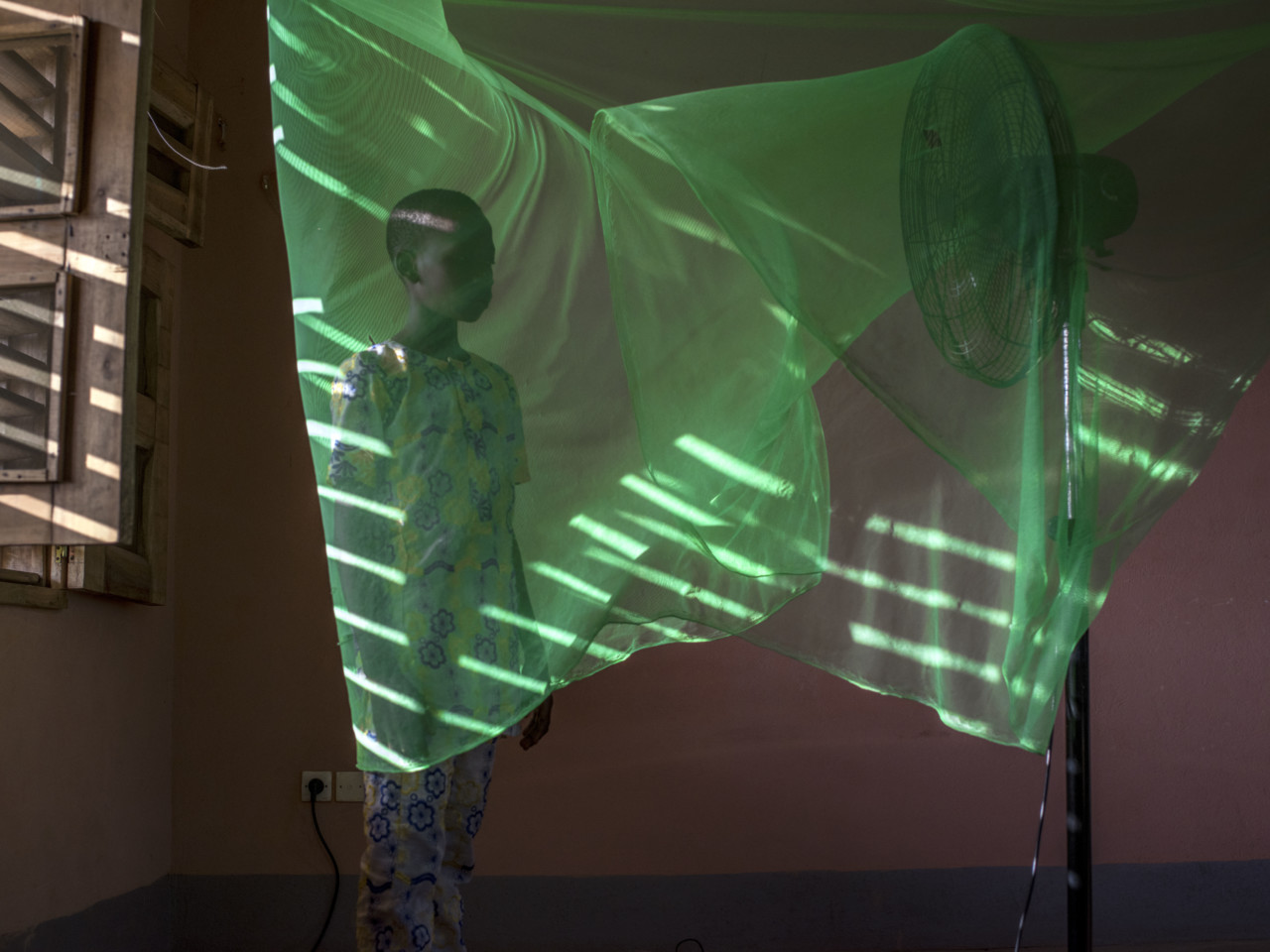 The Irish Times has featured a review of the new Martin Parr book, From the Pope to a Flat White: Ireland 1979-2019. “Martin Parr’s work traces a line through the decades as Irish society gradually shifted away from conformism. It also captures many things that never went away,” writes the newspaper’s Fintan O’Toole. The work from the publication will go on show as a touring exhibition in Limerick, Dublin, Roscommon, and Belfast, from February. Read the piece here. 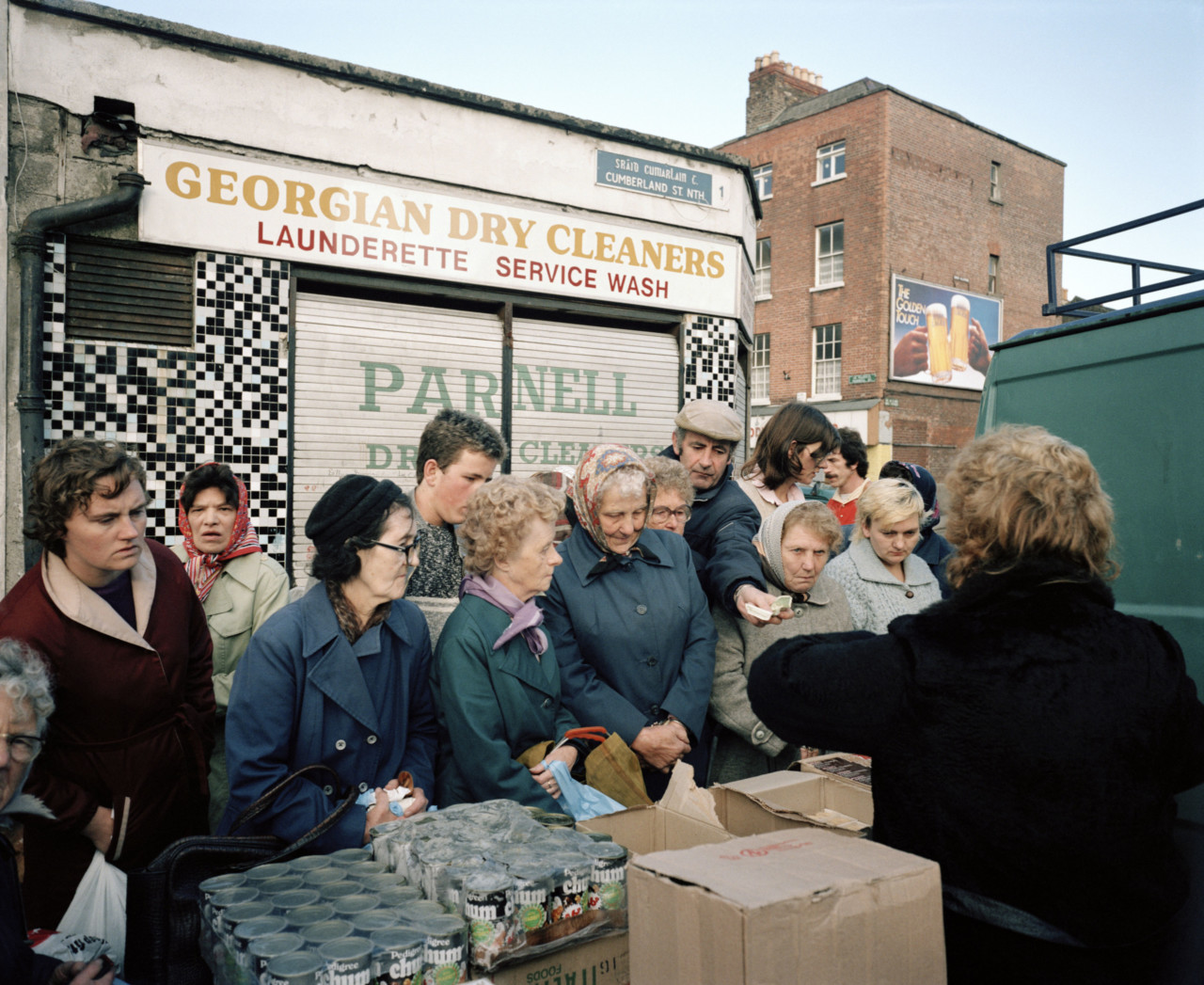 i-D has featured interviews with five photographers who depicted the concept of ‘family’ for the clothing brand, Palace. Jim Goldberg contributed a collaged image from a shoot on which Alessandra Sanguinetti assisted on styling and photography. Read the Q&A with Goldberg, and the other Palace collaborators, in i-D’s Winter 2020 print issue, and online here. A new book by journalist Ian Cobain explores the killing of police photographer Millar McAllister during The Troubles in Northern Ireland on April 22, 1978. The publication is titled Anatomy of a Killing: Life and Death on a Divided Island, and its cover features an image by Peter Marlow of a street scene during conflicts in Belfast. A review of the book on The Guardian says, “Cobain… casts new light on the culture of terrorist violence and state repression that defined Northern Ireland during 30 years of conflict.” Read more here. 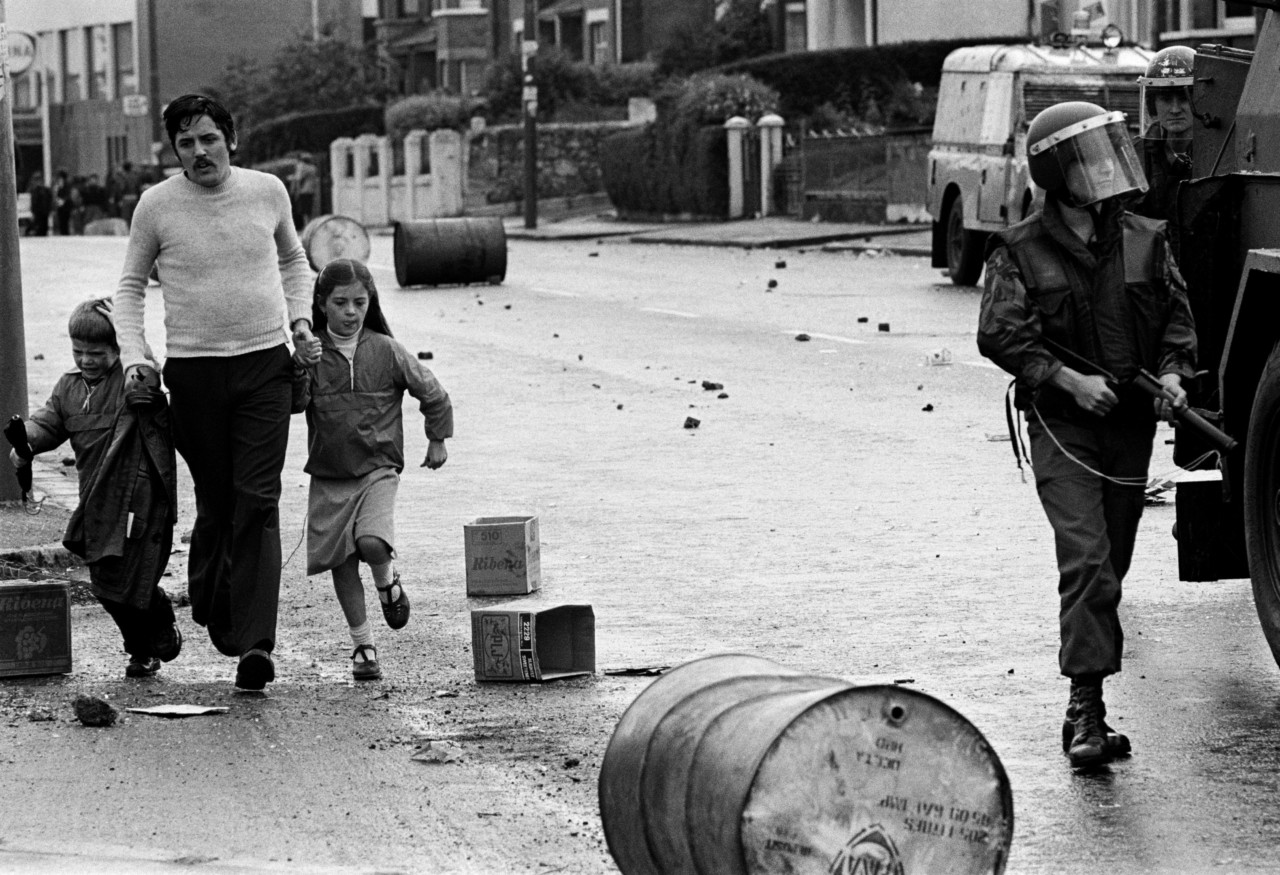 German broadcaster Deutsche Welle, or DW, recently made a video feature about the new exhibition of Matt Black’s project, American Geography, currently on show at the Deichtorhallen Hamburg. The news channel spoke to curator Ingo Taubhorn at the gallery, and offers an insight into the project —previously titled Geography of Poverty— which spans six years of work made by Black around the United States. Watch the video here. 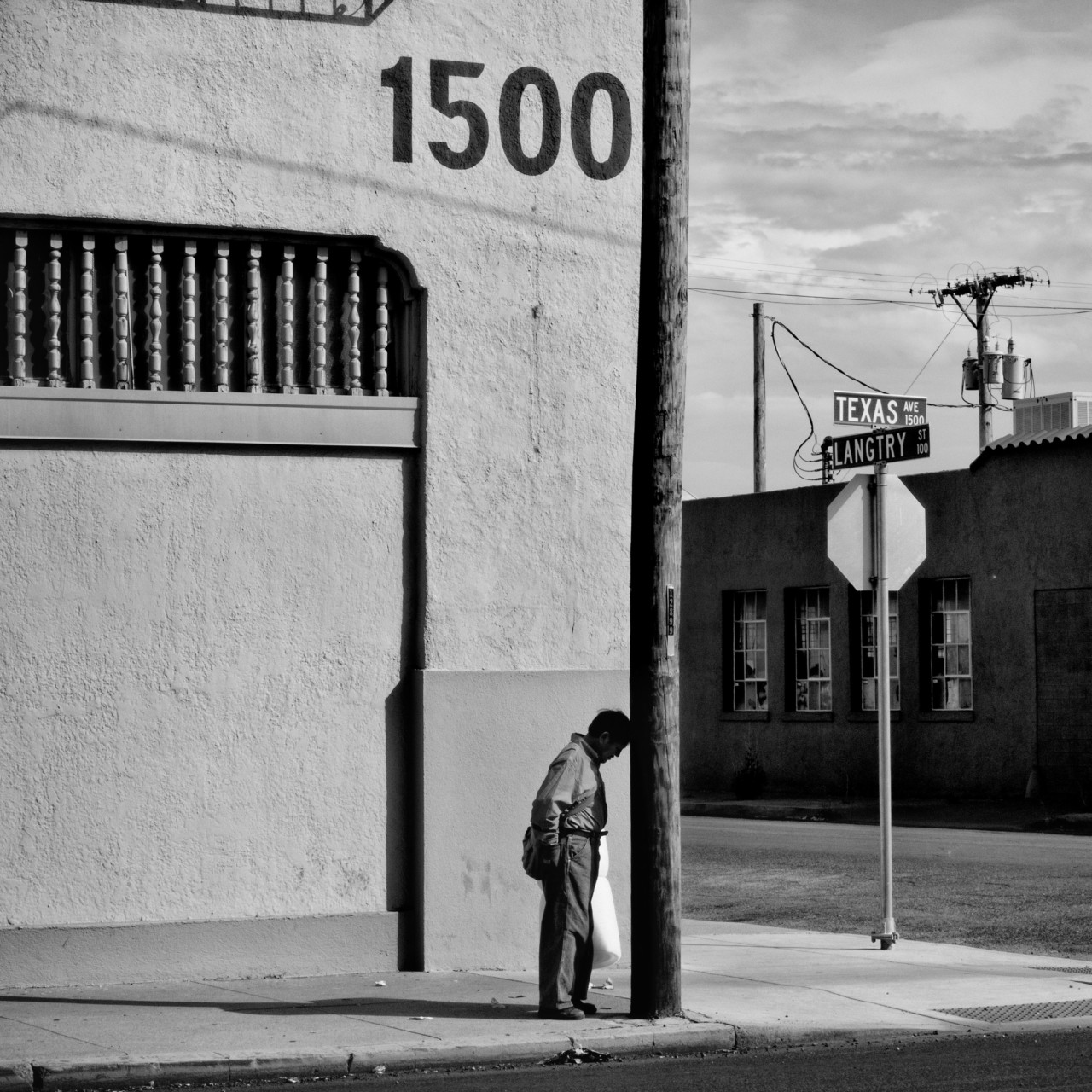 Magnum Photos honored at the International Photography Hall of Fame

The International Photography Hall of Fame has selected Magnum Photos for its Lifetime Achievement award. You can see Magnum’s president, Olivia Arthur, speaking live at the awards ceremony on Friday, October 30, at 7pm CST. Find more information about the awards here. 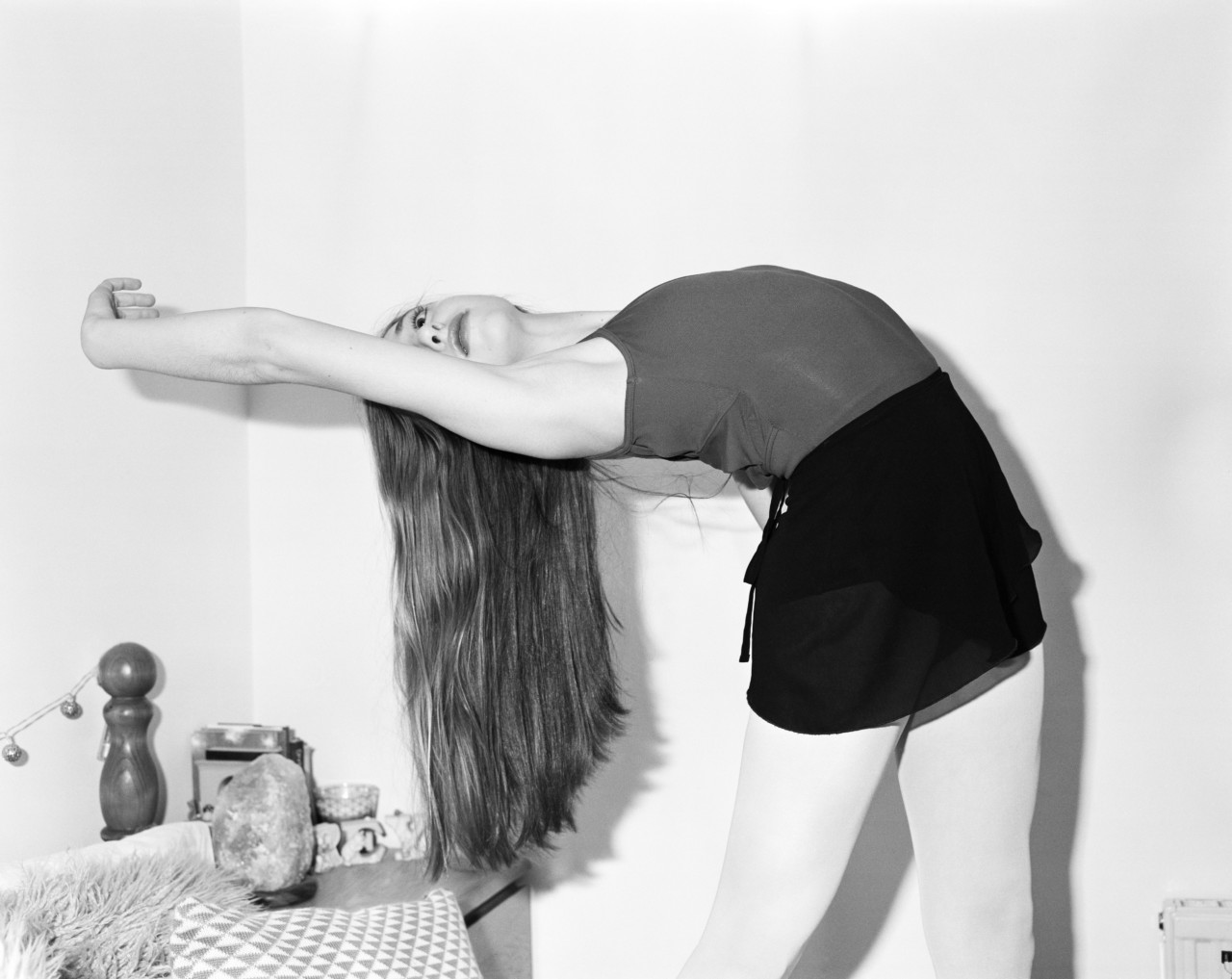 Young dancer Freya shows some of her moves in her bedroom. Hull, England, 2017 © Olivia Arthur/Magnum Photos.

The W. Eugene Smith Memorial Fund has announced Sabiha Çimen as one of the winners of its 2020 grant prize. The Smith Fund’s Daniella Zaleman teamed up with fellow jurors photography critic Teju Cole, and curator Yukiko Yamagata to select photographers who fulfilled its criteria of exceptional documentary photography practice as exemplified by W. Eugene Smith over his 45-year career. Read more here. 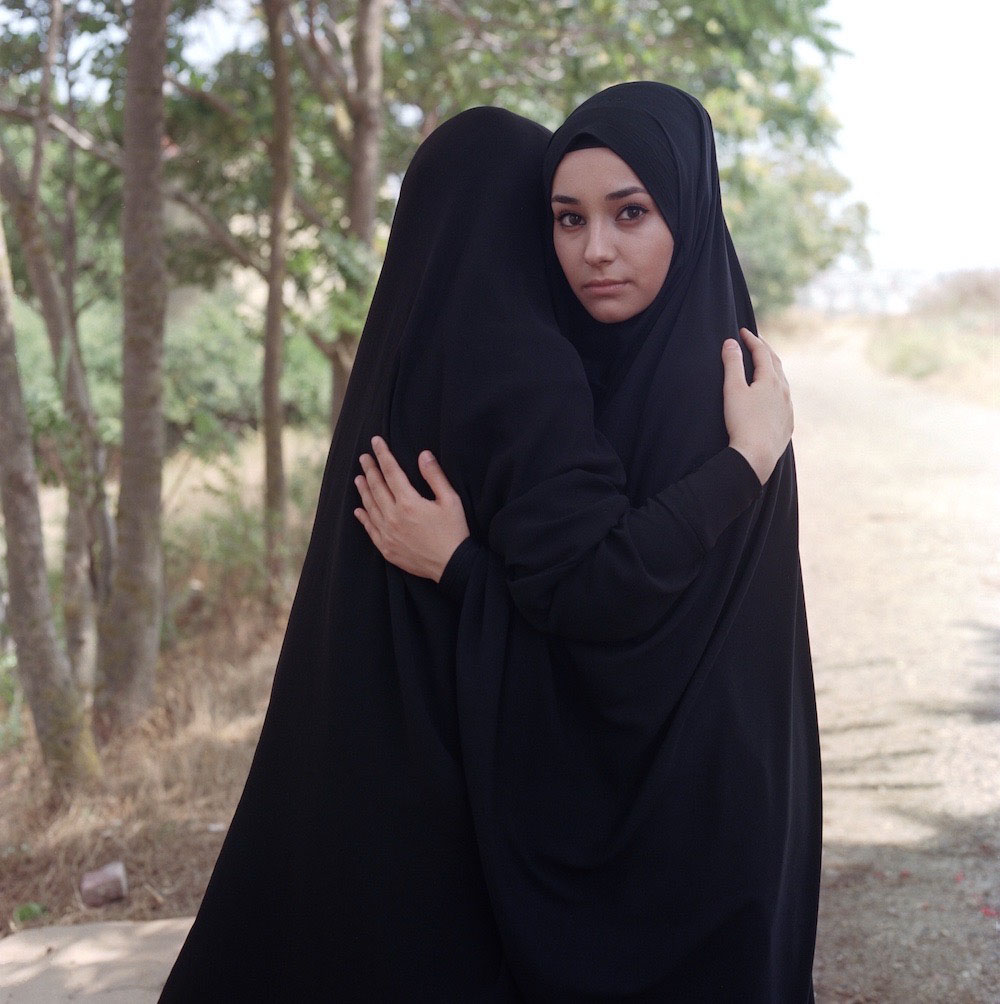 The Jimei x Arles International Photo Festival has announced the nominees for its Discovery Award and Women Photographers Award. Both categories include recognitions of Sim Chi Yin, with the former dedicated to her projects, Shifting Sands, and Most People Were Silent. Attendees of the festival in Xiamen, China, will be able to see the work on show in the city this autumn. For more information and tickets, visit the link here. Sim Chi Yin In the background, layers of black bags of sand form a cofferdam -- an enclosure built within a body of water to allow the enclosed area to be pumped out -- on the fringe of a parcel of reclaimed l (...)
and intended for the planned second airport in Xiamen, southern China. | The prosperous southern coastal city of Xiamen started in 2016 to reclaim land in preparation to build a controversial second airport on Dadeng Island, a 13 square kilometer island on the border of Xiamen and Kinmen island which belongs to Taiwan. When the airport is completed on reclaimed land, the size of Dadeng island will have doubled. The plans are that by 2025, the airport will have two runways, and be able to serve 45 million passengers per year. Right now, highways and subways connecting Xiamen and Dadeng Island are under construction. Although it’s widely reported that the airport is scheduled to be operational by 2020, there is at present no evidence that the central government and the military have given the final approval to the construction of the airport. China. 2018. From "Shifting Sands", 2017-on-going. This project was supported with a grant from the Pulitzer Center for Crisis Reporting. © Sim Chi Yin | Magnum Photos

The LUMA Rencontres Dummy Book Award has just announced Larry Towell’s The History War as one of its shortlisted projects for its 2020 prize. Photographic experts from the École Nationale Supérieure de la Photographie d’Arles, the Luma Foundation, and Rencontres d’Arles festival will decide a winner to be announced on November 10, 2020. See the full list of nominations here. 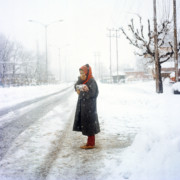