The Polish photographer unpacks his project documenting Hungary’s border wall with Croatia and Serbia, explaining how his work on propaganda shaped his interest in “how ideology manifests in architecture” 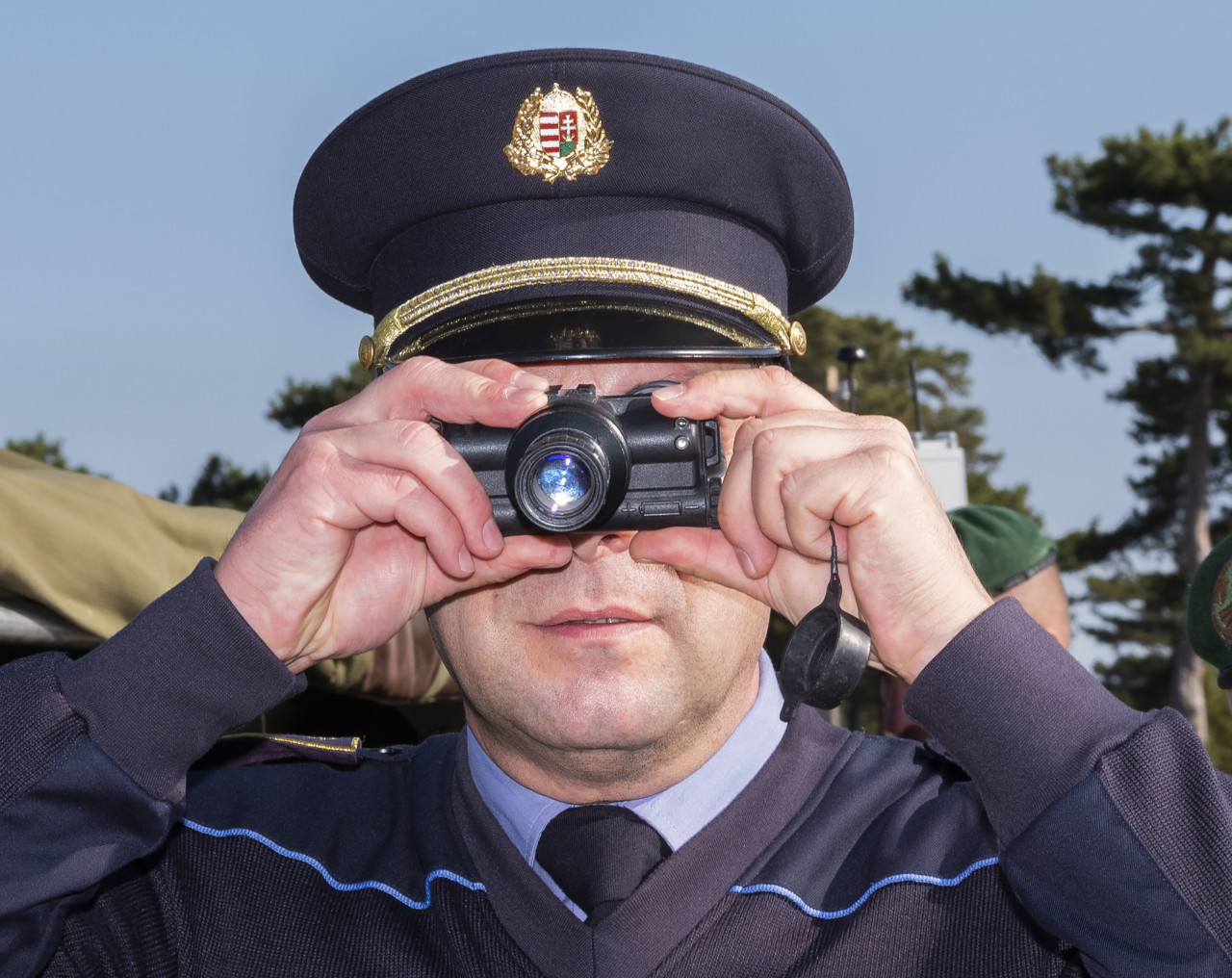 Rafal Milach’s photo series, I’m Warning You, is a documentation of the Hugaro-Serbian border barrier which aims to explore the various tangible and intangible elements that have come to construct and enforce the concept of Hungary’s borders in recent years. The project captures the fluctuating architecture of the border, varying from a double-layered 3-meter-tall metal fence studded with watch towers every few hundred meters, to simple concertina-wire. The images depict the surroundings of the borders — farmlands, national preserves and forests — and fractional breaks in the barrier, like the point where it meets the Danube.

Here, Milach speaks to Bayryam Bayryamali about how and why he documented the border, explaining how his life’s work, focusing on the constructions of propaganda and methods of control in contemporary autocracies, influenced how his project has come together. The photographer recently launched a crowdfunding campaign to publish the project, along with two other bodies of work exploring architecture and politics, as a book-triptych. “It’s an architectural survey dedicated to propaganda and control. It also collects experiences of the borderland communities,” writes Milach. You can donate to the campaign and receive a physical copy of the work here.

Bayryamali is a Bulgarian Turkish visual researcher currently working as an Archive and Digital Trainee at Magnum Photos. Through his practice, he explores the themes of memory, reconciliation and participation through photography and in gallery context. His research examines the issues of new world borders, il/legal identities and intergenerational trauma in relation to the current socio-political reality in Eastern Europe. 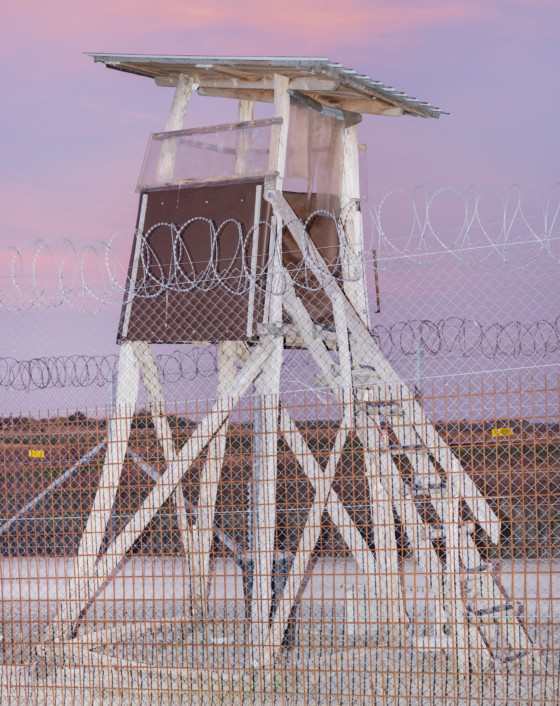 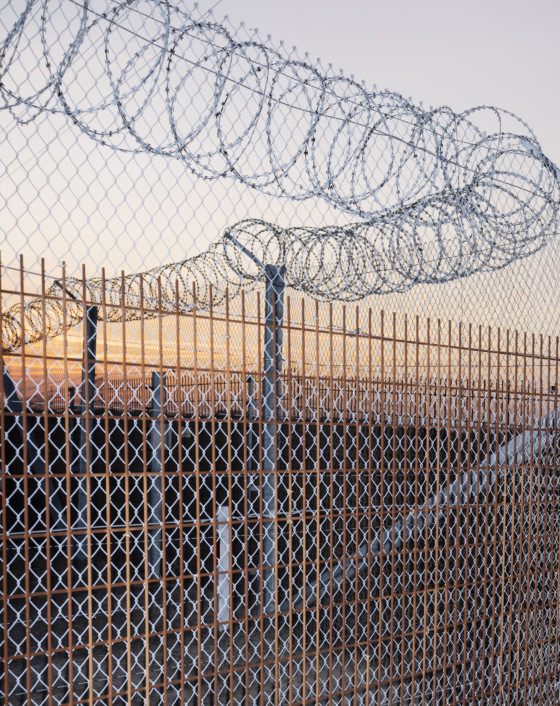 “Attention, attention. I’m warning you that you are at the Hungarian border. If you damage the fence, cross illegally, or attempt to cross, it’s counted to be a crime in Hungary. I’m warning you to hold back from committing this crime. You can submit your asylum application at the transit zone.”

This automated message is played in several languages from English to Arabic to people trying to cross the Hungarian-Serbian border wall. Erected in 2015 by Hungarian prime minister Viktor Orban’s administration as a response to Europe’s refugee crisis, the wall spans 532 km of the nation’s periphery.  That year, hundreds of thousands of people, mostly from Iraq, Syria, and Afghanistan, travelled from Turkey through Bulgaria to Serbia and Croatia, where they attempted to cross the Hungarian border into the E.U. After enacting tougher laws governing border crossing and amending asylum registration, the Hungarian Orban’s government faced global scrutiny for the various measures it implemented to halt migration. 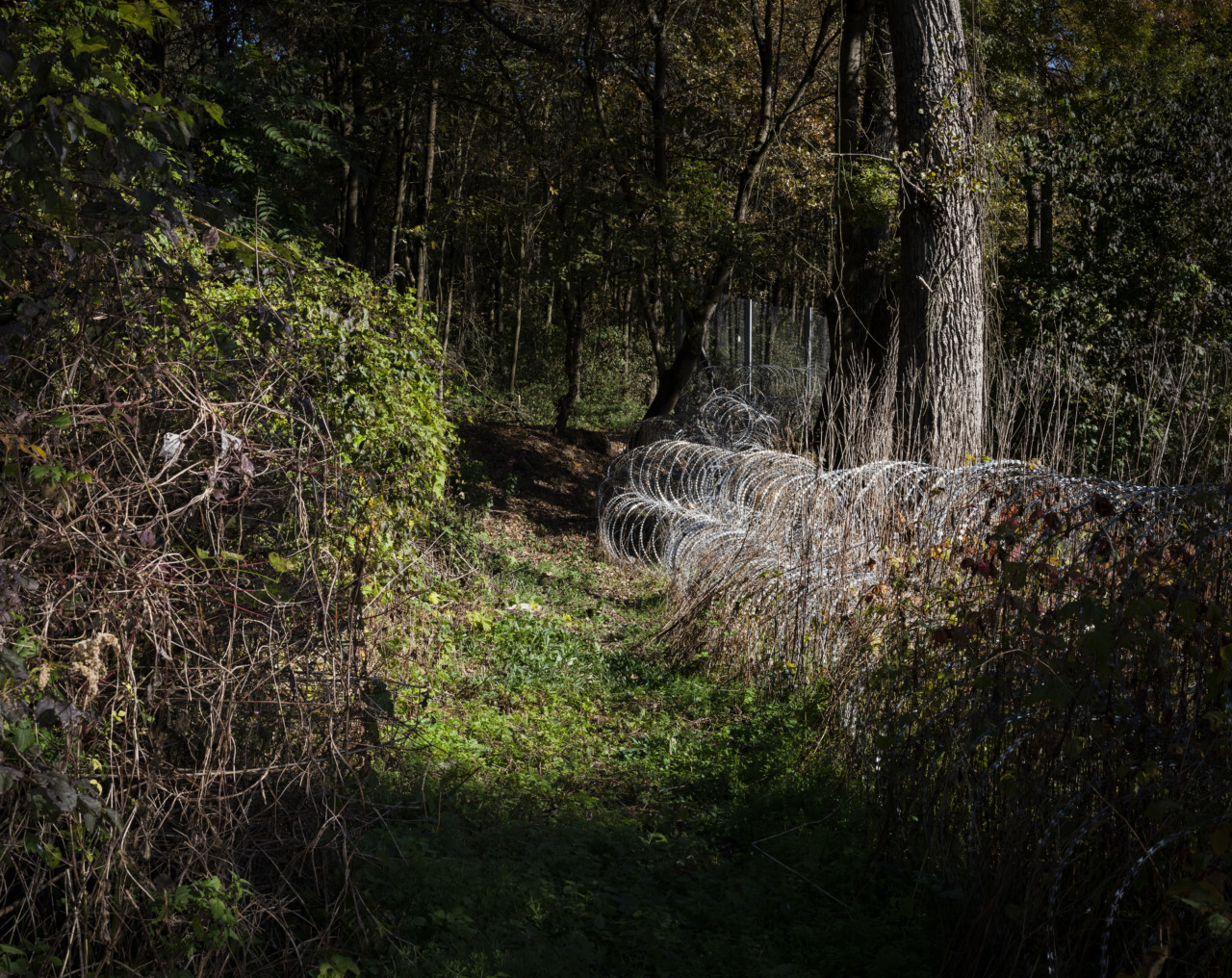 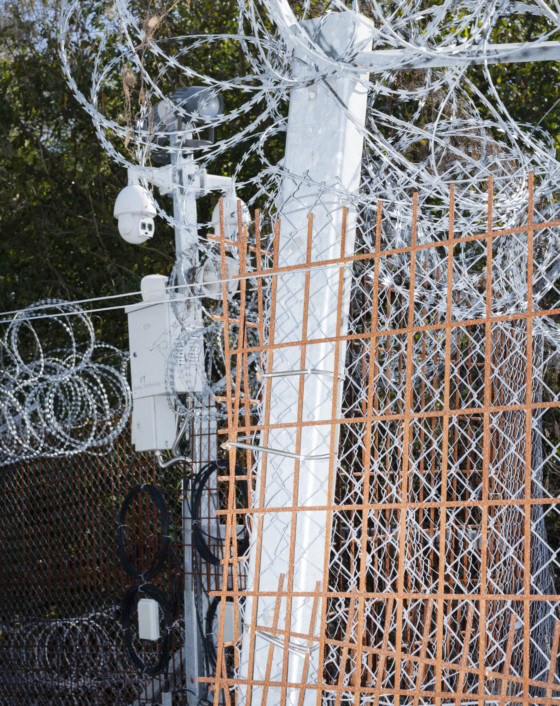 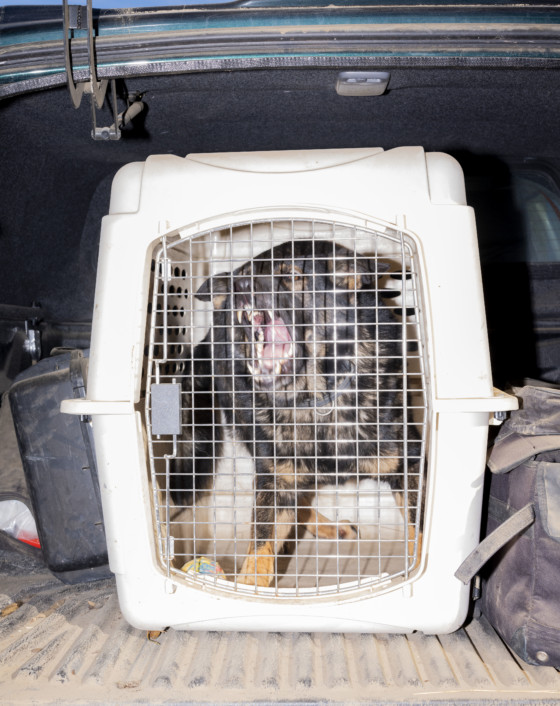 Milach’s images portray the various systems – from border patrols to surveillance cameras – that track and control any border crossing that might take place. Through these photographs the Polish photographer explores how anti-migrant nationalism sweeping across not only Hungary, but around the world, is displayed through border making and border control. 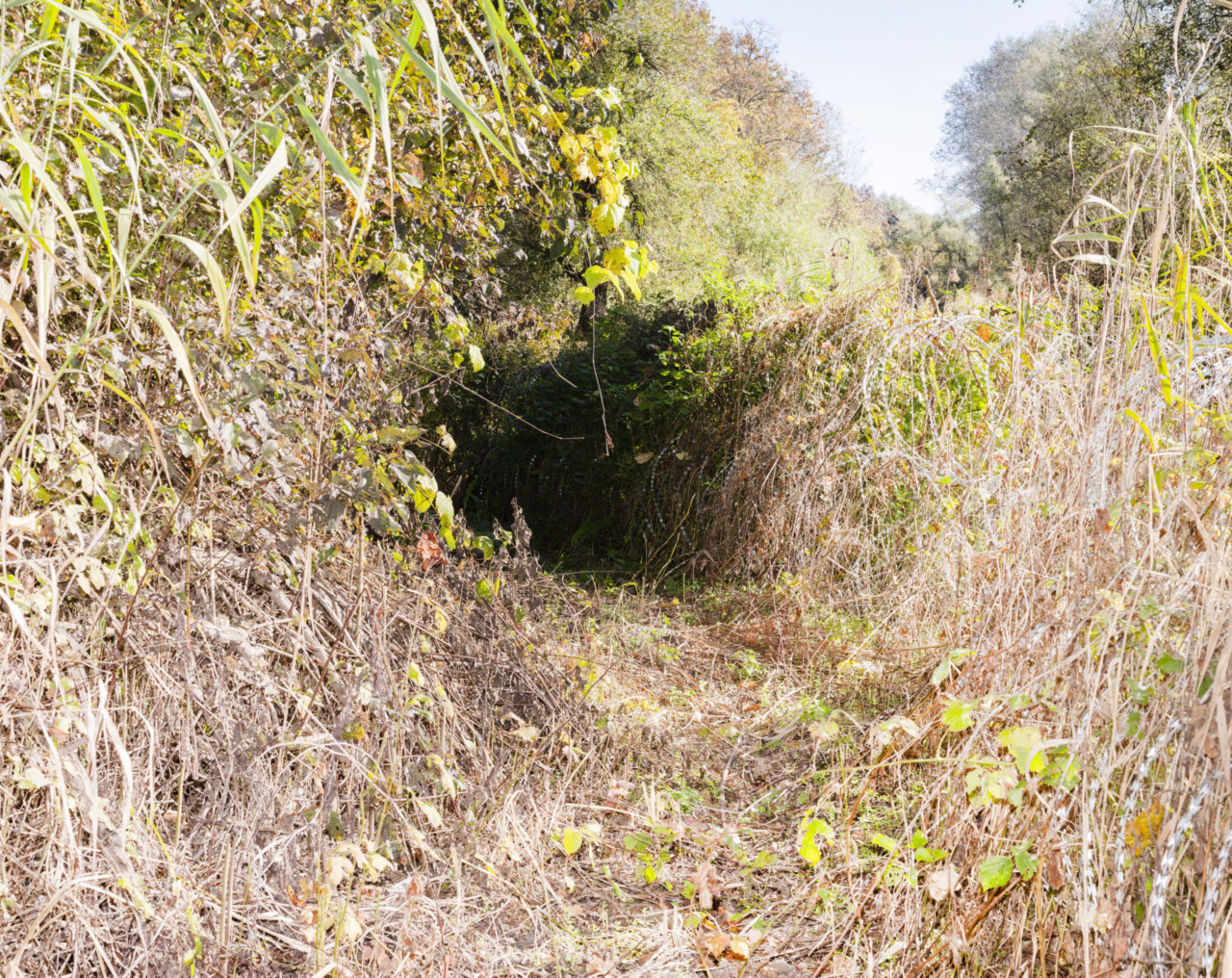 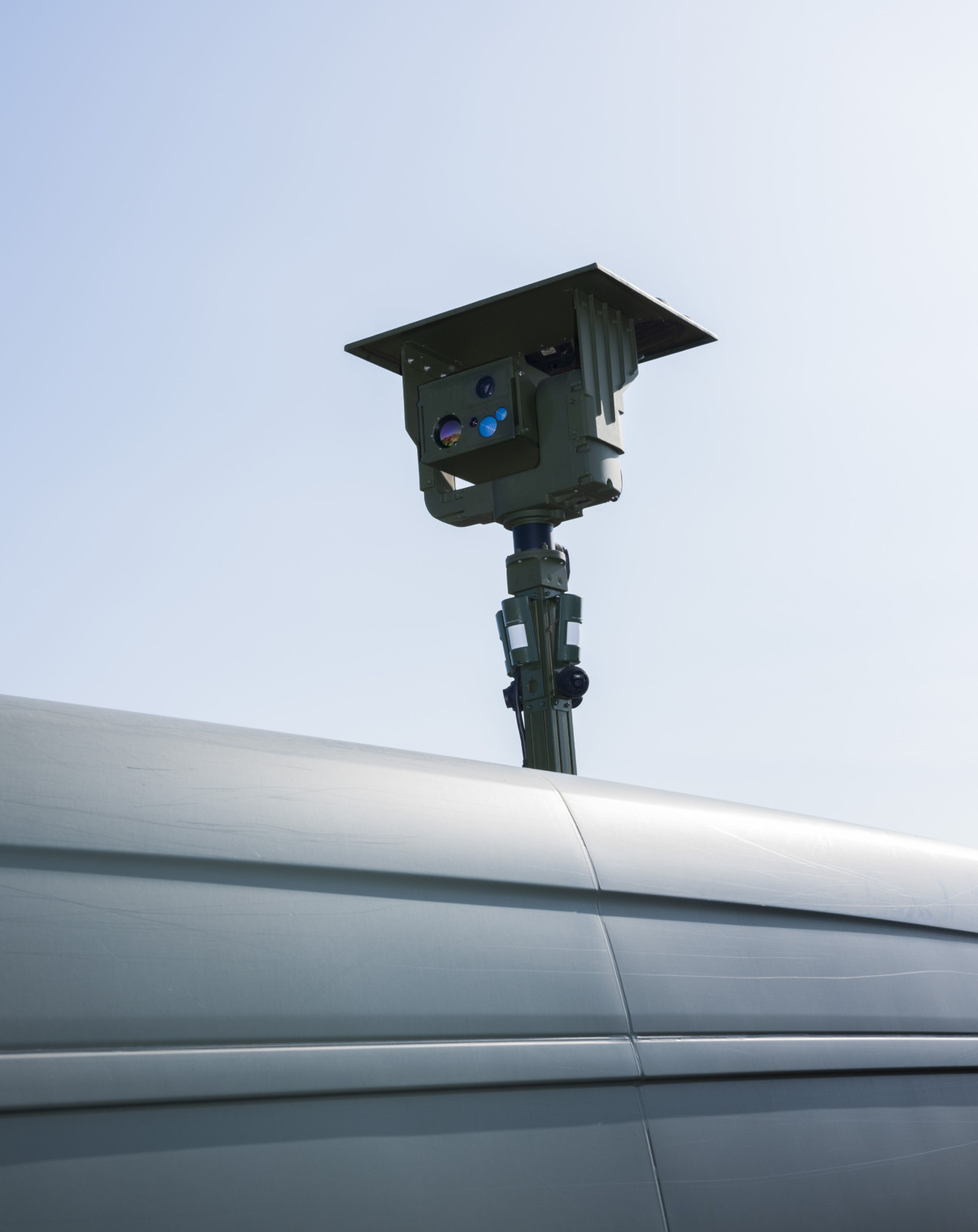 Rafal Milach, having first-hand experience of growing up in a communist regime and witnessing the fall of the Iron Curtain, has a unique perspective on the current political climate in Eastern Europe.  “The prewar WWII generation of my grandparents was grateful the war was over (at least in our region),” Milach comments when asked about the notion of national identity. “The postwar generation of my parents also used this narrative,” he goes on, “They lived most of their lives with limited freedoms and rights under a communist regime but still in relatively peaceful times — riots, marshal law, repression and killings still didn’t mean the war. It was slightly different with my generation. Although we were fed with soviet propaganda upholding the myths of WWII I think we were rather formed by the transition of the 1990-ties. I’m glad that I have the experience of living under state oppression or the shortage of almost everything or growing up in isolation. That helps me to appreciate democratic structures and makes me aware how fragile they can be and that freedom is not something guaranteed.” 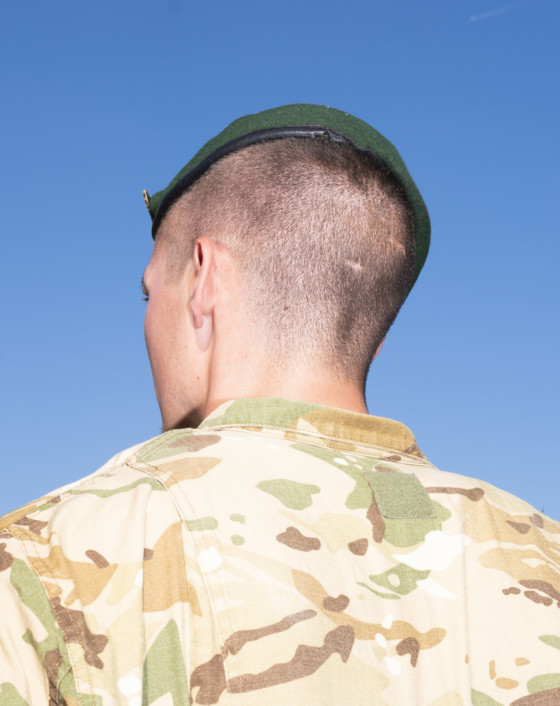 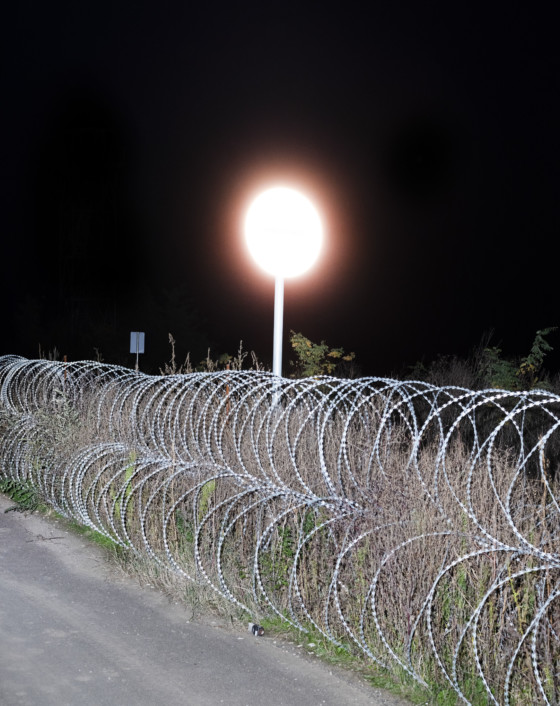 "Orban’s wall or rather a fence is a strong pillar of anti-migrant propaganda and fuels right wing populist policy of Hungarian government." 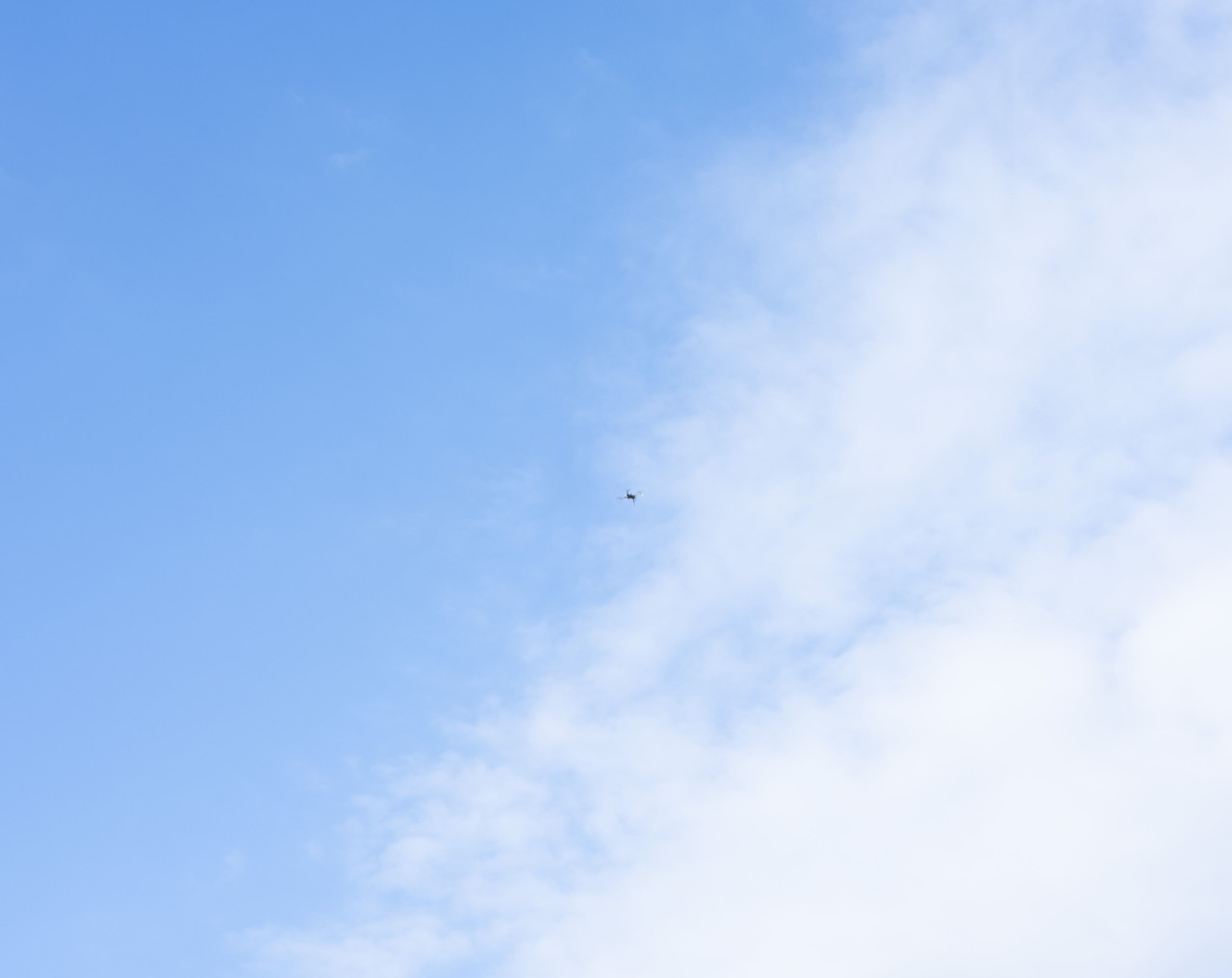 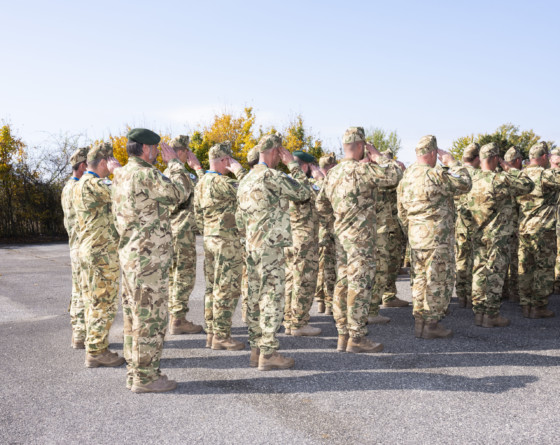 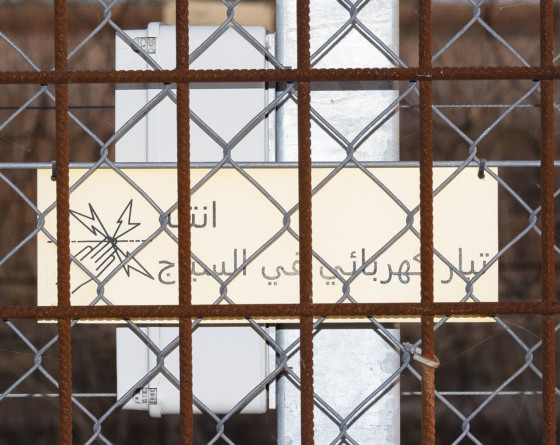 Milach has explored and documented various transitioning countries of the former Eastern Bloc. He travelled across Russia, Belarus, Georgia, Ukraine and many others, becoming a transitioning visual artist himself, crossing borders and approaches to photography. “I’ve been dealing with various transition related issues for the past 20 years,” Milach comments,  “Transition defined me as a person and as an artist. I can’t imagine working on something that doesn’t disturb or interest me on a personal level. However, I mostly feel like an outsider in a way. I’m pretty much aware I can’t get full access or I will never fully understand certain problems I touch upon. Yet this incapacity provokes curiosity and makes me engaged.”

One of the main themes of Milach’s practice is how propaganda is employed by various figures and states, and how it is manifested in the transition countries of Eastern Europe. His Orban Wall project is a case in point. His images of the border may be viewed as a symbol of national significance, a monument that protects a society from ‘intruders’; while some might find themselves perplexed by the ’emptiness’ and lack of signs of migration depicted in them. Hungary’s anti-immigration rhetoric [1] is not produced in a vacuum and Milach’s images depict the ambiguity of the various ways it displays itself. 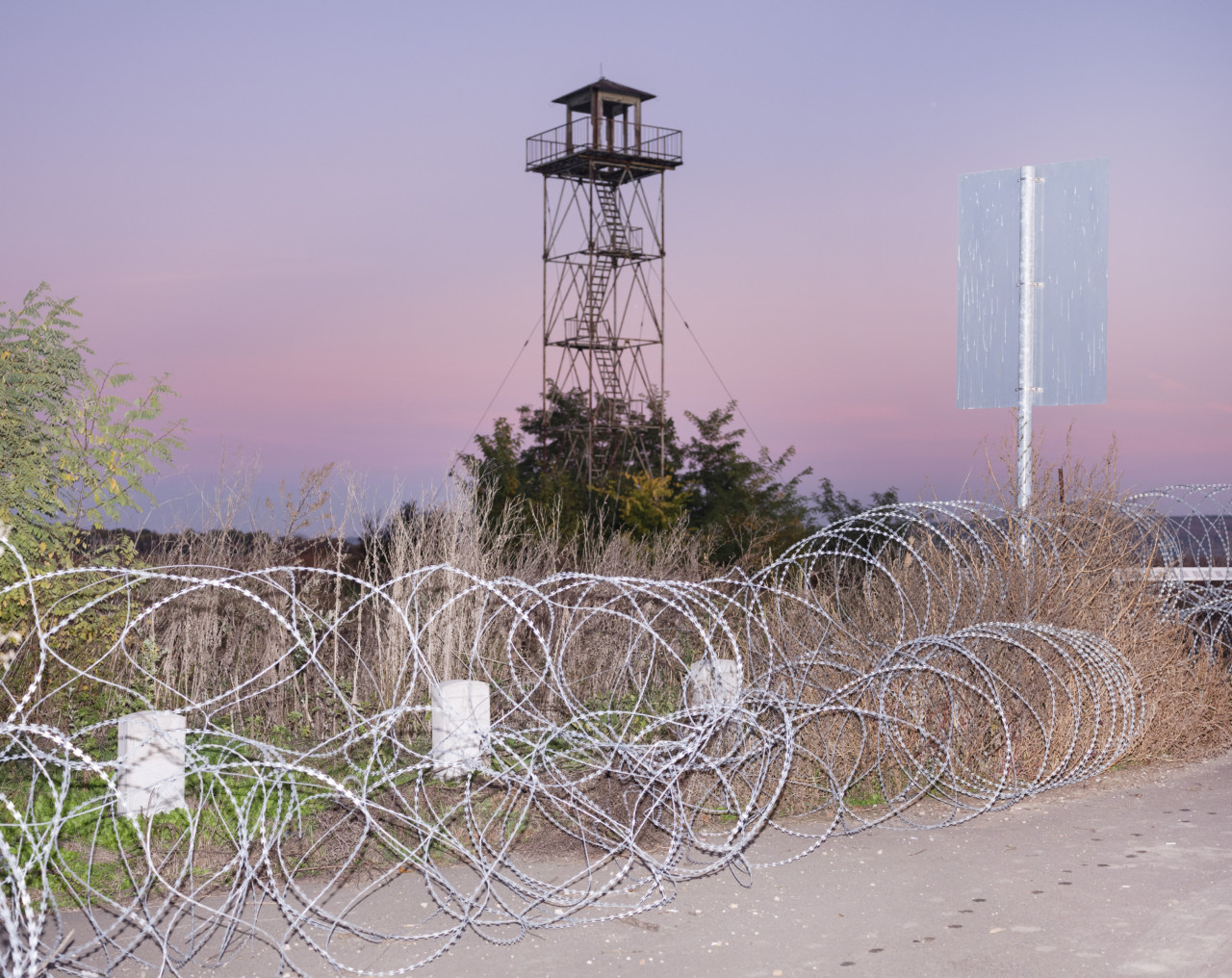 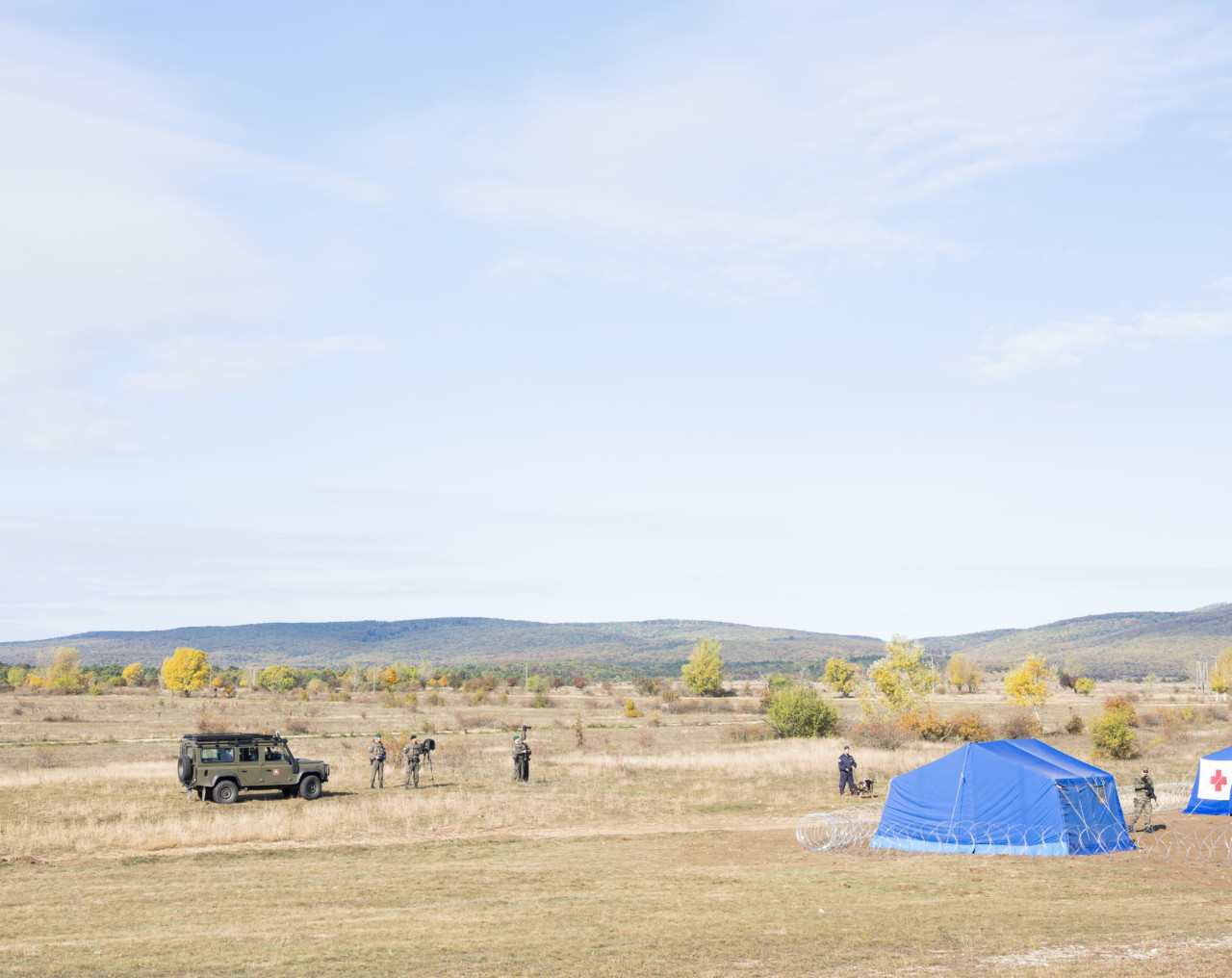 Milach’s interest in the idea of statehood and its material constructions is present in another recent project of his, Death Strip, in which he photographed the remains of the Berlin Wall. “It was just a small episode in my long-term project on mechanisms of propaganda, control and manipulation. Architecture plays a significant role in it. The fact a physical wall disappeared unfortunately doesn’t mean the division is no longer here.” 30 years after the fall of the Berlin Wall, with the former Eastern Bloc’s slow and strenuous transition from state communism to a market-based economy, there is an increasing anti-refugee rhetoric in these countries which once celebrated the opening of their borders to the West. In order to understand this dynamic one has to look back to their recent past more carefully. 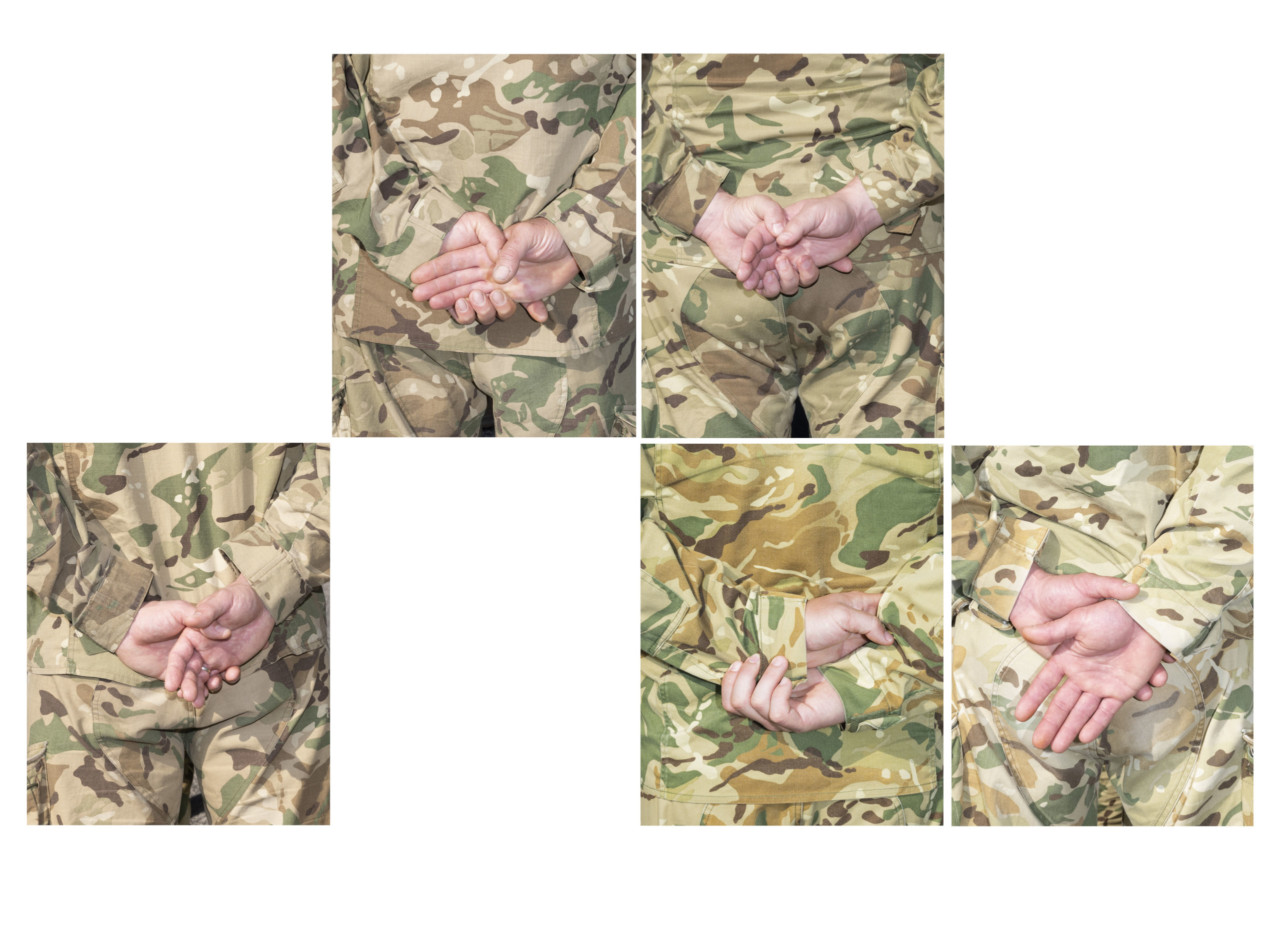 Rafal Milach International Border Guard training organized by Hungarian police and military forces. Presentation day included such elements of training such as pacification of riots in refugee camp, patrolling (...)
the border fence or capturing migrants. The training was accompaigned by the exhibition of surveillance and military equipment used at the border areas. Veszprem. Hungary. 10.2019 © Rafal Milach | Magnum Photos
License |

During the transition period the politics of fear and division in Eastern Europe had to change its course since there was no clear enemy to point the finger at for economic or political fallout after the end of the Cold War[2]. The issue of border security in Hungary is symptomatic of a wider reattribution of the notion of what ‘danger’ is in the post-Cold War years. Globalization has not brought the world of open borders that many right-wing political commentators warned of, but rather a globalized border business. Furthermore, the deployment of language which uses refugees as scapegoats and blames migration for economic downfall may easily be deployed as ideology to serve specific interests[3].  Asked why he was interested in documenting the Orban Wall, Rafal answers: “I’m interested in how the ideology manifests in architecture. Orban’s wall – or rather fence – is a strong pillar of anti-migrant propaganda and fuels the right wing populist policy of Hungarian government. ” 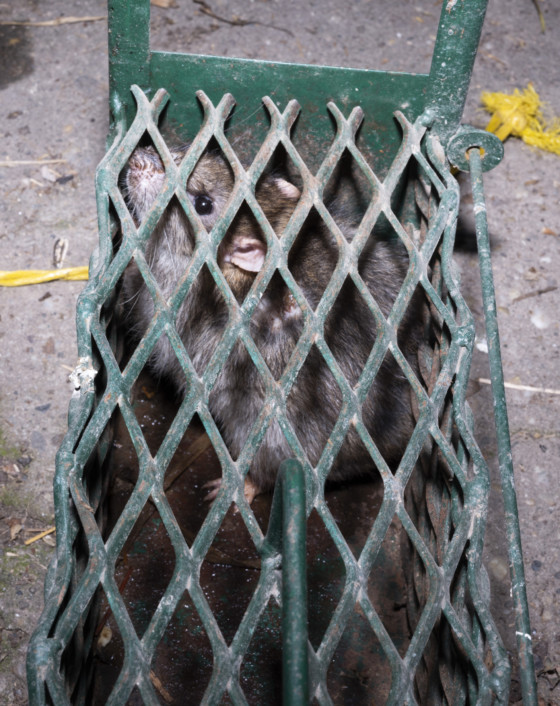 “The project is about how the border control architecture is structured,”  the photographer says, “I was not interested in creating a complete catalogue of control solutions though. The Hungarian border fence is not much fortified.” As seen in Milach’s images, border mechanisms employed in Hungary are not high-tech solutions. “There are no separate border guard units in Hungary, all patrolling work is done by the police and the military,” Milach continues, “There are also some unarmed civic patrols in border towns and villages. Many solutions seem to be quite temporary and home-made, for instance the watchtowers resemble more hunting pulpits rather than military structures. The clash between the semi-improvised structure of the border fence and its ideological aspect was something that really struck me.” This juxtaposition between the semi-improvised structure and the ideological connotations of a border hints at the viewer toward the various ways propaganda can work in an anti-migrant context[4]. 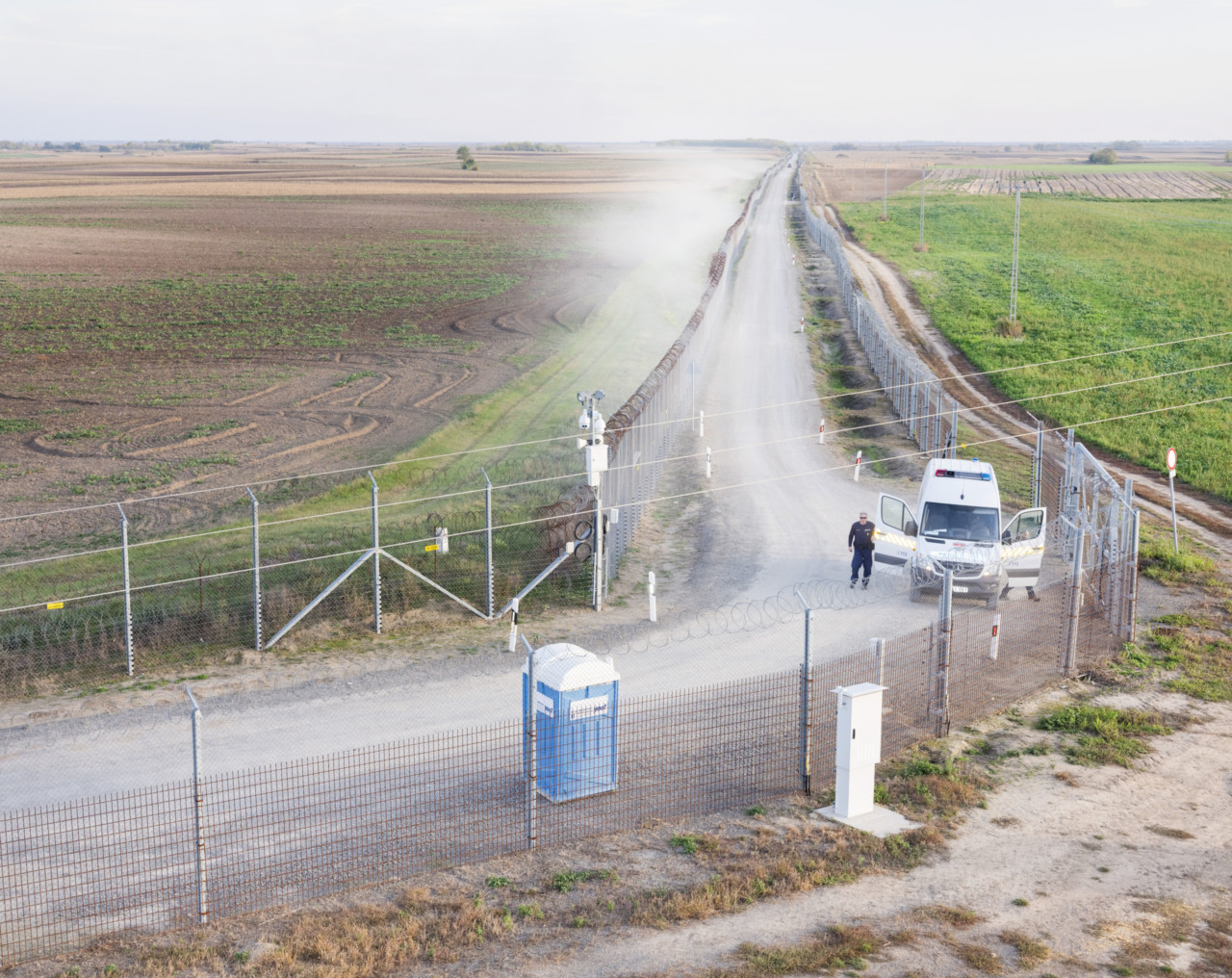 While Europe is still unable to deal with the migration issue it faces: despite years of trying to develop a more practical and equitable refugee policy, it hasn’t come up with an effective means of assisting the countries where most migrants arrive.  The current crisis at the Greek-Bulgarian-Turkish border is emblematic of the setbacks of the European Union. And while many attempt to come up with solutions, Viktor Orban thrives on conflict.

“The fence has been playing a significant role in Orban’s anti-migrant propaganda and was perceived as highly efficient by authorities,” Rafal Milach comments, “It’s a very sad monument of the fall of humanitarian values. Even if part of it disappears.” Croatia is set to join the Schengen Zone in 2020, which will officially abolish all passports and all other types of border control at the border between its order with Hungary. “The new waves of refugees will be trying to get to Europe which is totally not prepared to deal with the migration crisis and I don’t believe building walls is the solution for that.” 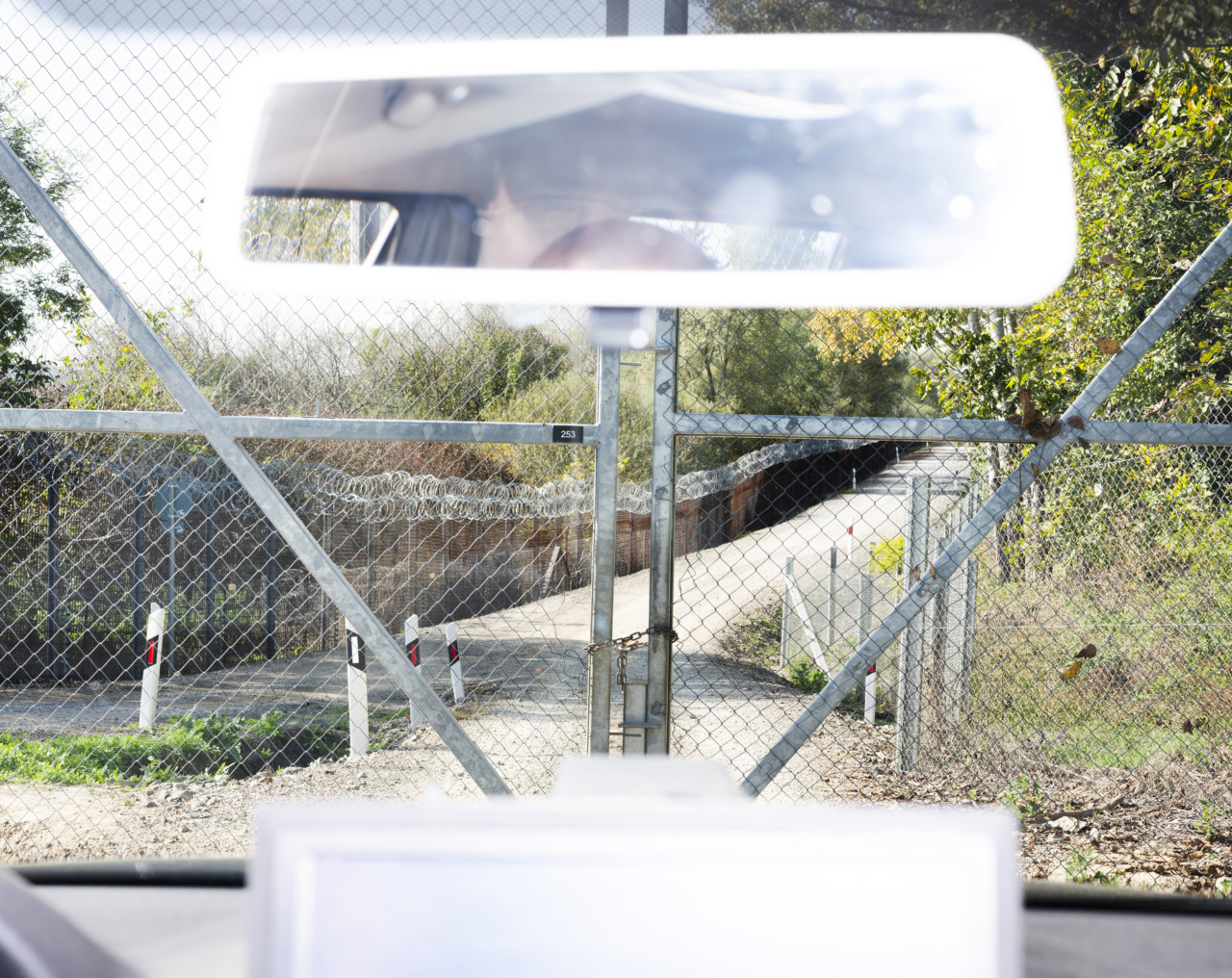 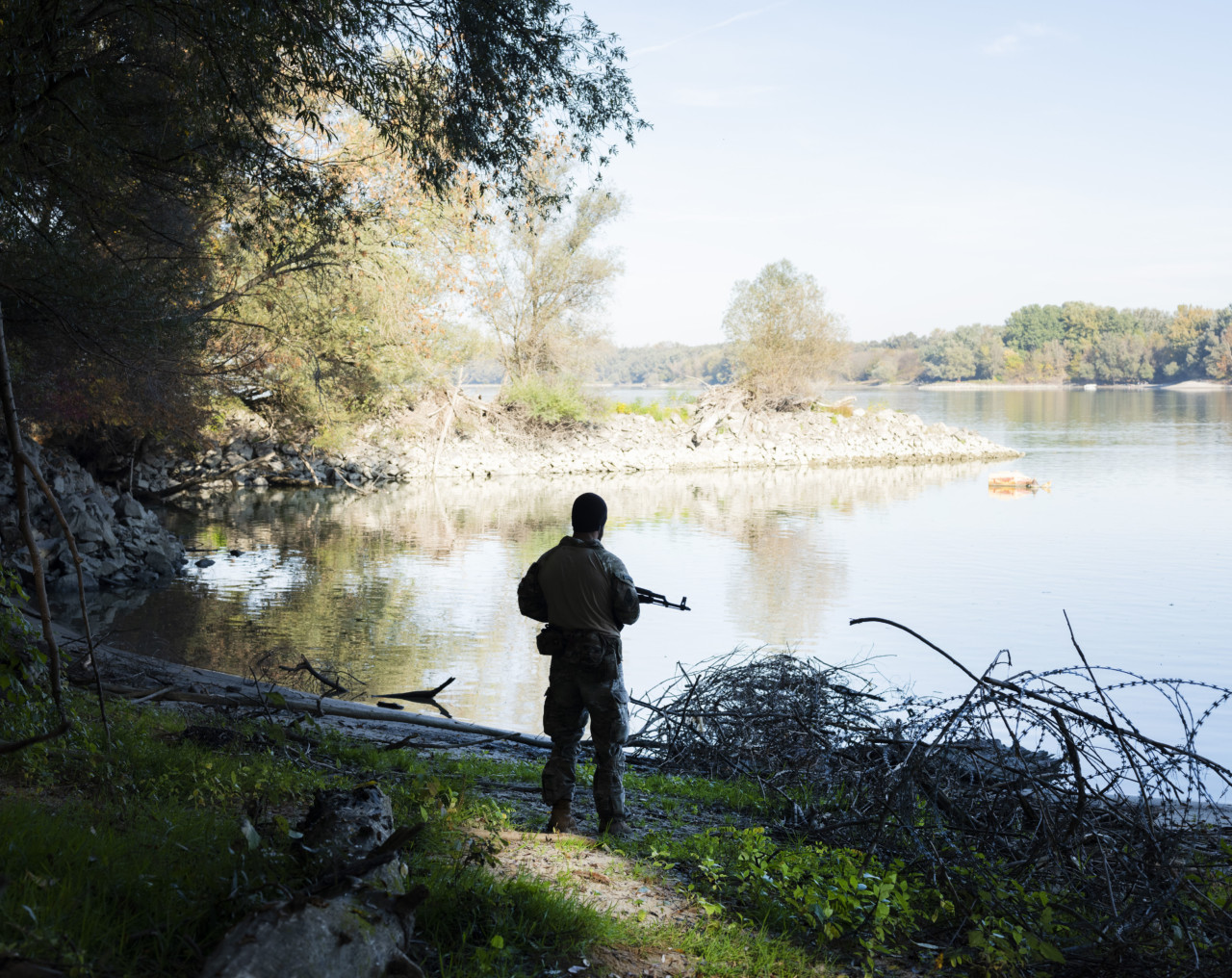 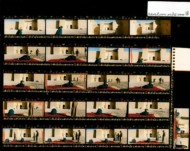 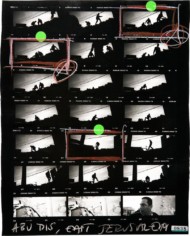