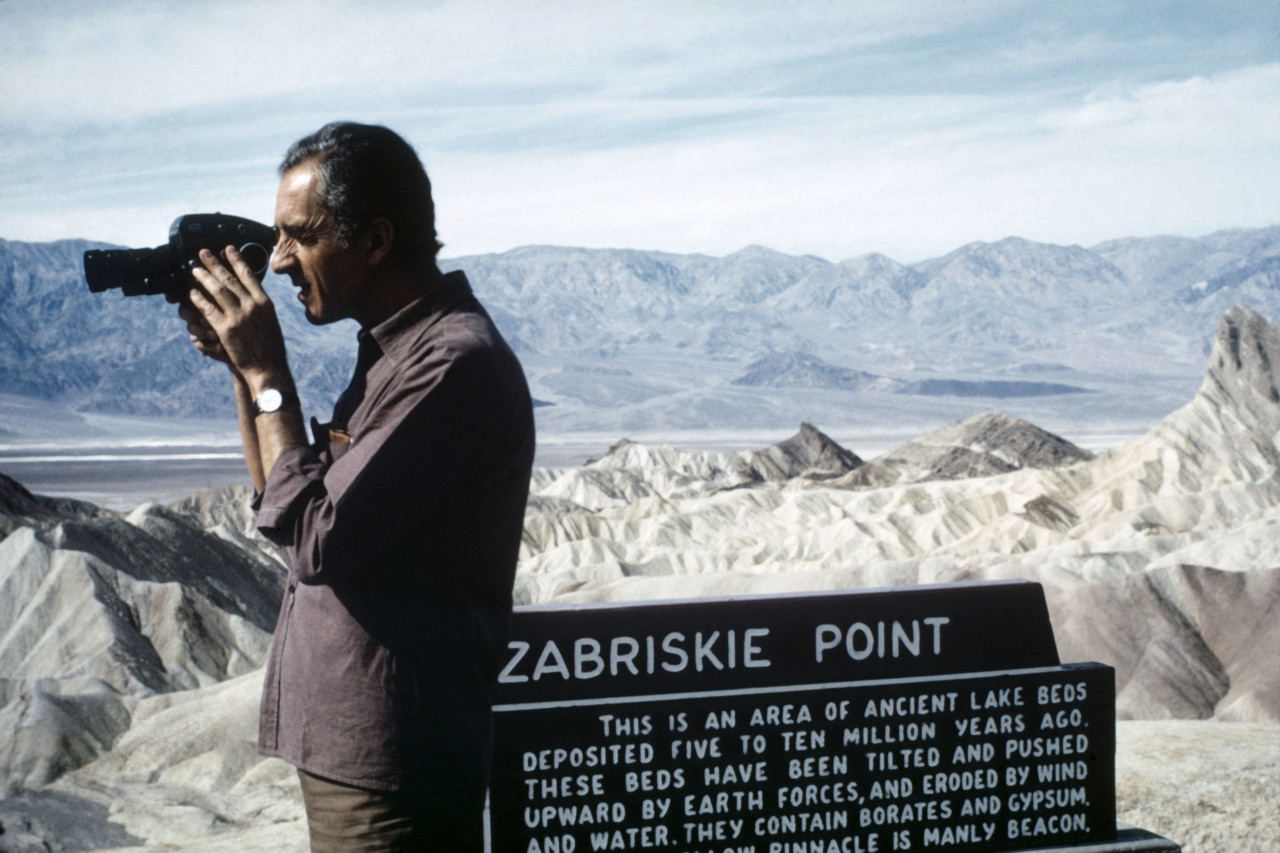 Here, we look at Bruce Davidson’s work made on the set of Zabriskie Point, by Italian director Michelangelo Antonioni. Although torn apart by critics at the time of its release, the film has since been hailed a cult classic for its authentic portrayal of the hippie zeitgeist, captured through Antonioni’s inimitable lens.

In July of 1968, Italian director Michelangelo Antonioni invited Bruce Davidson to Los Angeles to shoot the making of Zabriskie Point, his first (and only) film to be made in America. The film was a study of the counterculture that had gripped America’s youth during the 1960s, and the American photographer – a master documenter of outsider communities – was a natural fit. "Zabriskie Point has been widely reappraised as a cult classic, celebrated for its mesmeric cinematography, languorous rock soundtrack, and authentic portrayal of the hippie zeitgeist" 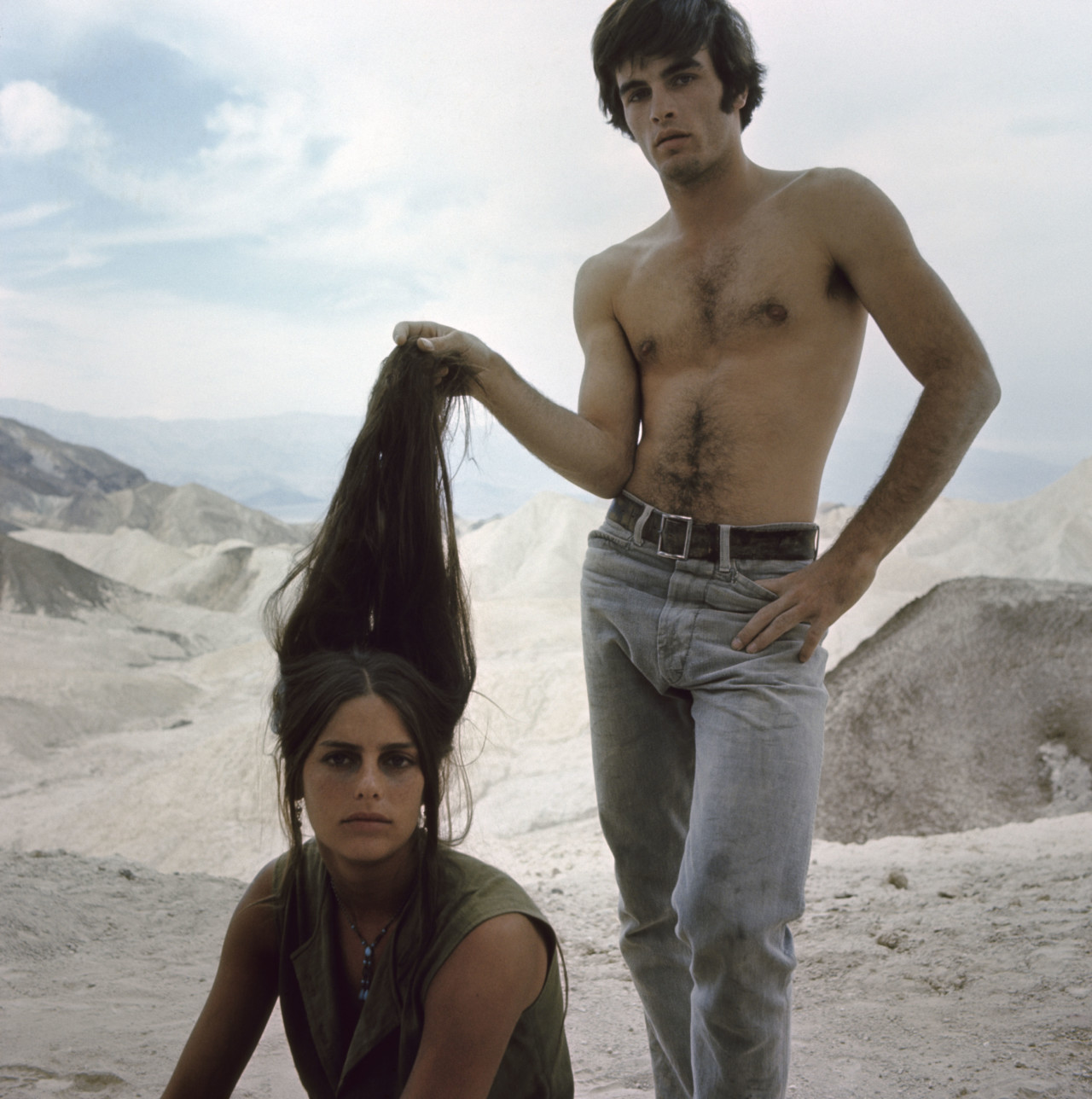 Antonioni was still enjoying the commercial and critical success of his 1966 thriller Blowup, a mystery set in the hedonistic throes of swinging London, and MGM studios had high hopes for his first American endeavor, the final film in a three-part deal. They invested $7 million in Zabriskie Point’s making, hoping to reel in the Vietnam generation with its themes of free love, political activism and anti-consumerism. But when the film was released in 1970, it was a huge flop, lambasted by critics for its vacuous characters and making just $900,000 at the US box office. The film critic Roger Ebert wrote, “This is such a silly and stupid movie, all burdened down with ideological luggage it clearly doesn’t understand, that our immediate reaction is pity.”

Fast forward 50 years, however, and Zabriskie Point has been widely reappraised as a cult classic, celebrated for its mesmeric cinematography, languorous rock soundtrack, and authentic portrayal of the hippie zeitgeist (both of its leads, Daria Halprin and Mark Frechette, were non-professional actors and very much involved in the countercultural movement). Davidson’s on-set photographs, meanwhile – of the film’s creator, its breathtaking locations, and its exceptionally photogenic young protagonists – offer compelling insight into its impressive production and Antonioni’s hands-on approach. 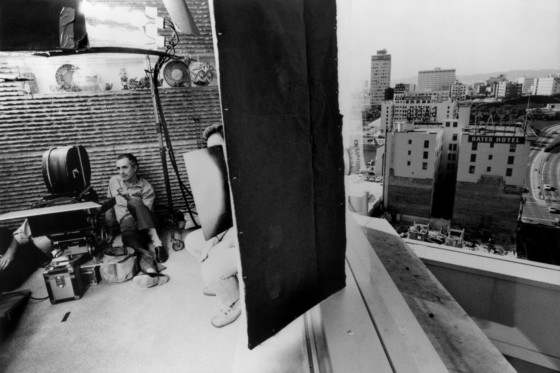 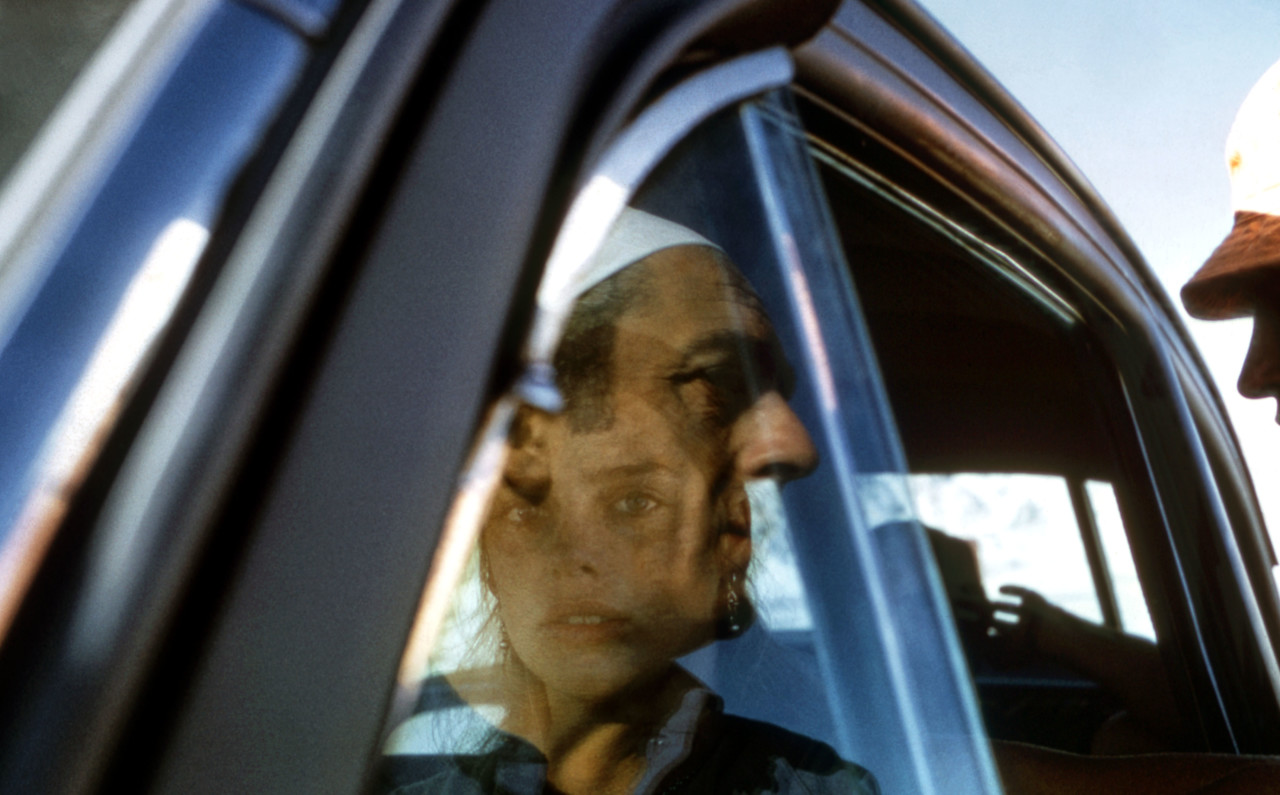 In true Antonioni form, Zabriskie Point’s story is a meandering one, its loose narrative penned by a team of five writers, including Sam Shepard. Mark is an angry young activist who refuses to join the student strike on his local campus (“I’m prepared to die, but not of boredom”), opting for a more violent, one-man approach. He purchases a gun and appears to shoot a police officer during a protest, before stealing a pink private jet and setting off into the Californian desert. It’s here that he meets Daria, a pot-smoking temp on a road trip to Phoenix to meet her real estate tycoon boss.

Mark woos her with a series of North by Northwest-style stunts and the two spend an afternoon frolicking on the dunes of Zabriskie Point – a stunning overlook on the eastern outskirts of Death Valley, near Nevada. They make love, spawning a surreal orgy scene involving a hundred extras rolling around on the picturesque yellow and grey canyons – a moment memorably captured by Davidson. Things take a more sinister turn when Mark decides to return the plane, newly decorated with anti-capitalist slogans, while Daria arrives at her boss’s vast clifftop house in time to witness its explosion – the film’s final, unforgettable protest against Western consumerism. 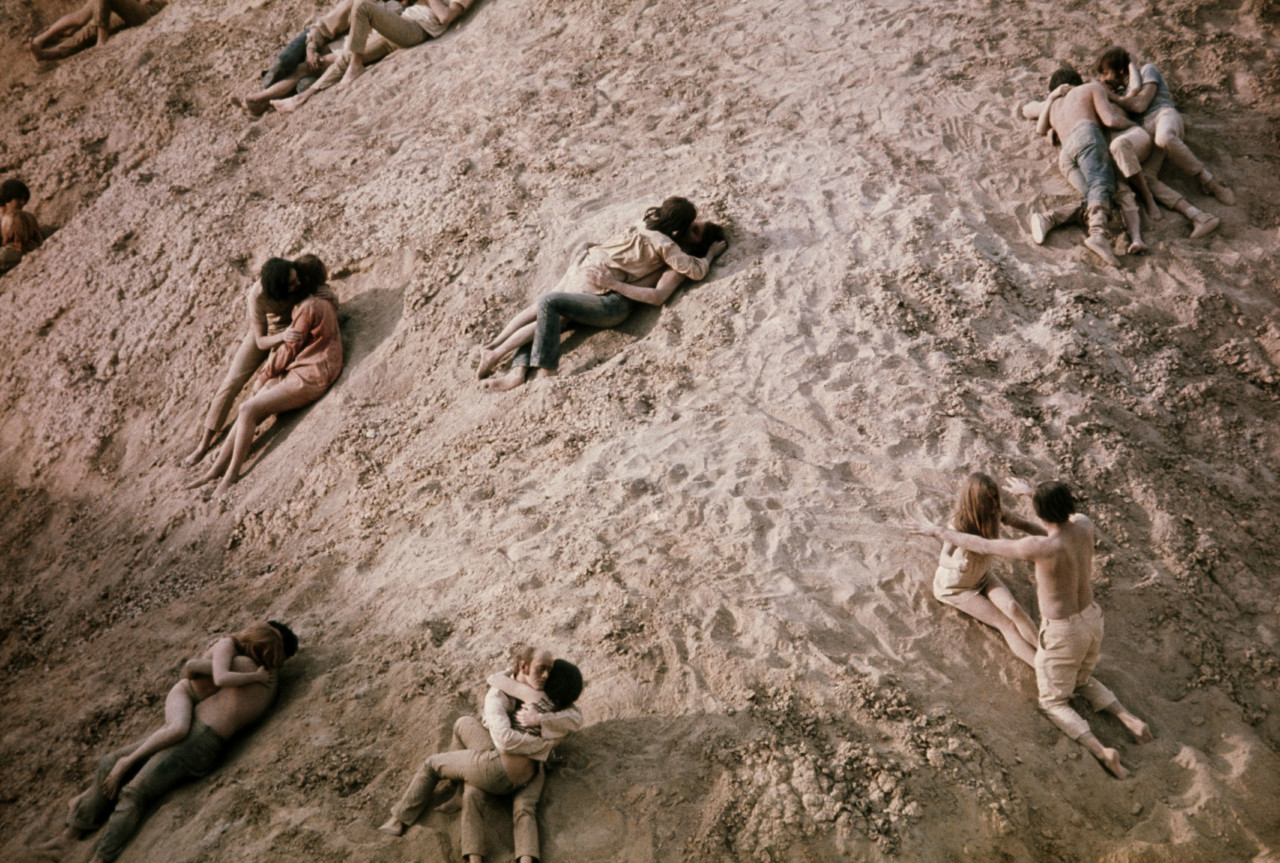 "Rather than hone in solely on Zabriskie Point’s most cinematic moments, Davidson quietly engages himself in conveying his own behind-the-scenes take on the filmmaking process, often including equipment in the shots to striking effect" 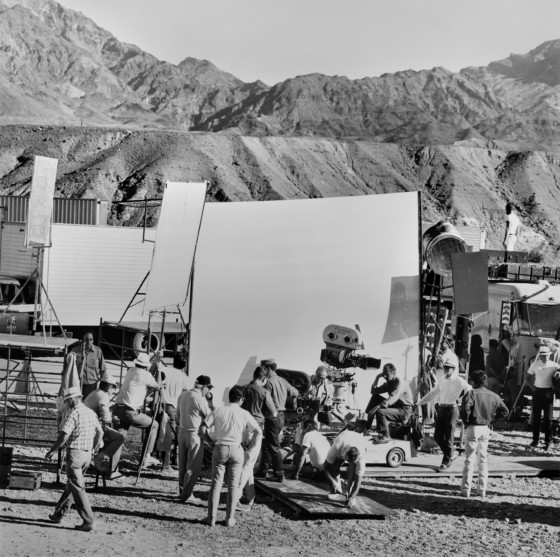 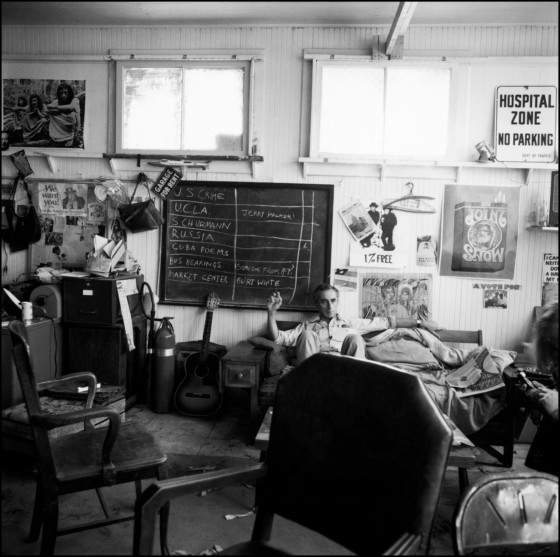 Interestingly, rather than hone in solely on Zabriskie Point’s most cinematic moments, Davidson quietly engages himself in conveying his own behind-the-scenes take on the filmmaking process, often including equipment in the shots to striking effect. He has a knack for depicting his subjects in a manner that is simultaneously natural and expertly composed and his images of the film’s young lovers (who formed a real-life relationship during filming) are some of the shoot’s most enticing – Halprin sitting atop Frechette’s shoulders, drenched in desert sunlight; the pair lying, limbs entwined, on the fractured sandbanks. 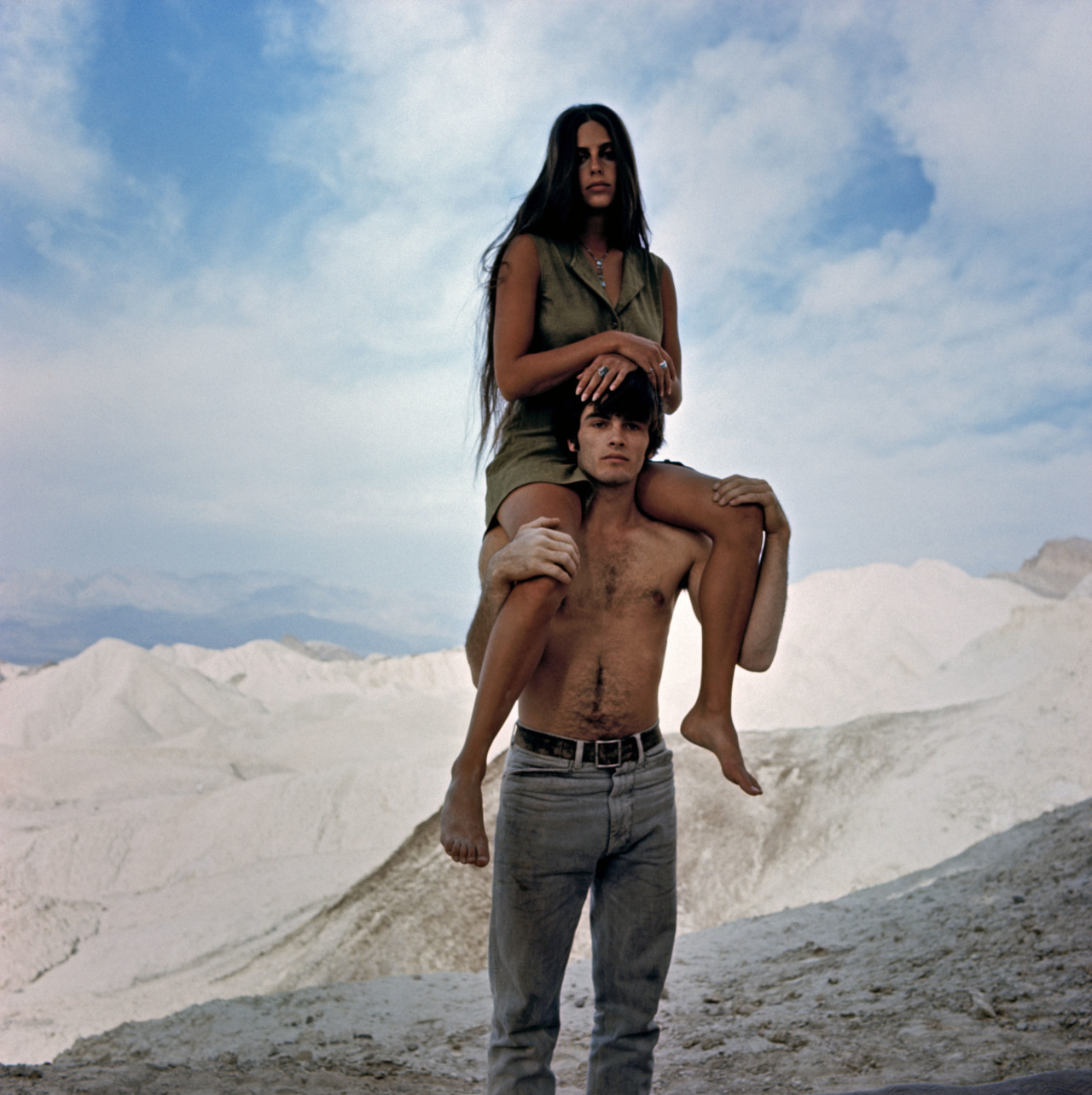 "Up-close portraits of Antonioni, meanwhile, as he squints through viewfinders and gesticulates wildly to his cast, further attest to Davidson’s aptitude for blending seamlessly into the woodwork" 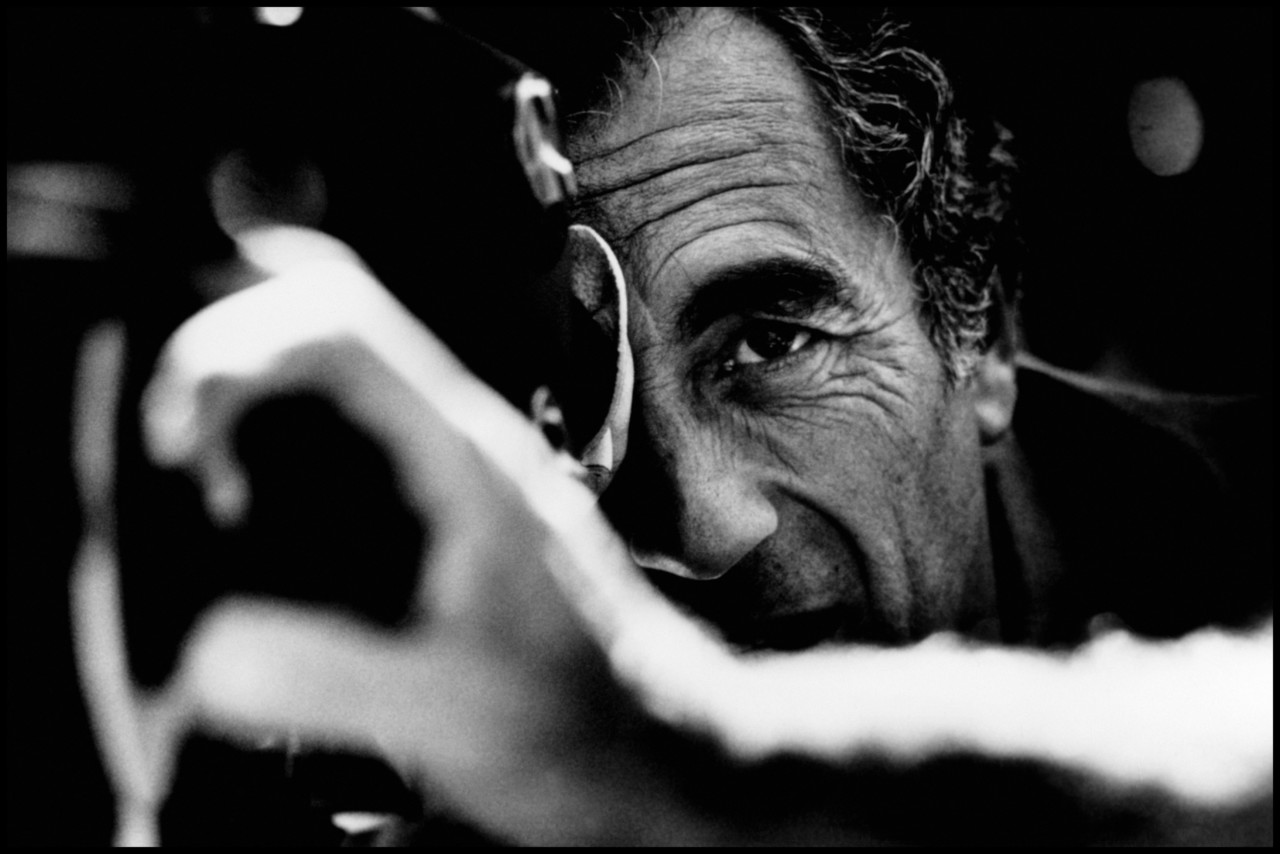 Up-close portraits of Antonioni, meanwhile, as he squints through viewfinders and gesticulates wildly to his cast, further attest to Davidson’s aptitude for blending seamlessly into the woodwork in pursuit of his own artistic goals. The result is an American artist’s take on an Italian artist’s take on American culture – something that the notoriously enigmatic and experimental Antonioni no doubt would have reveled in. 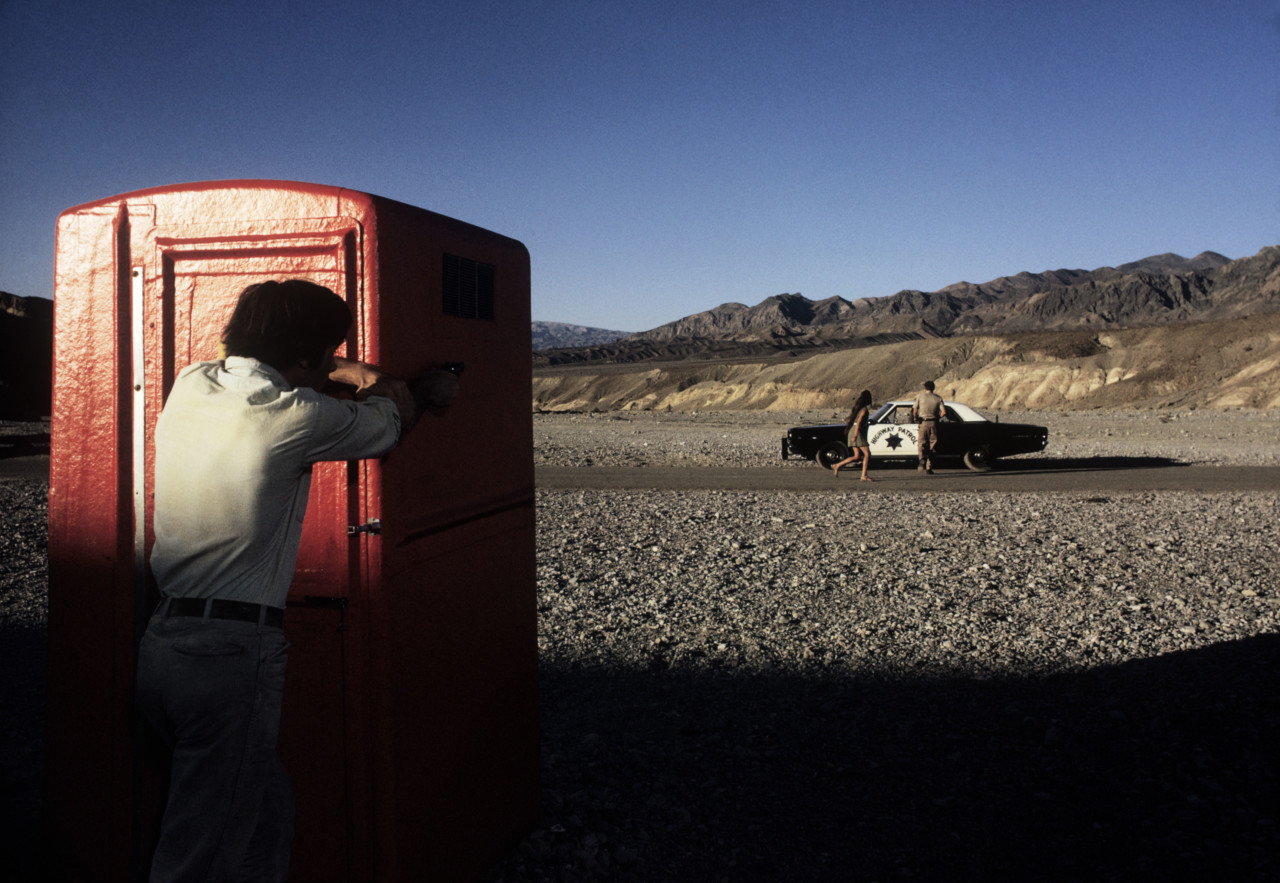