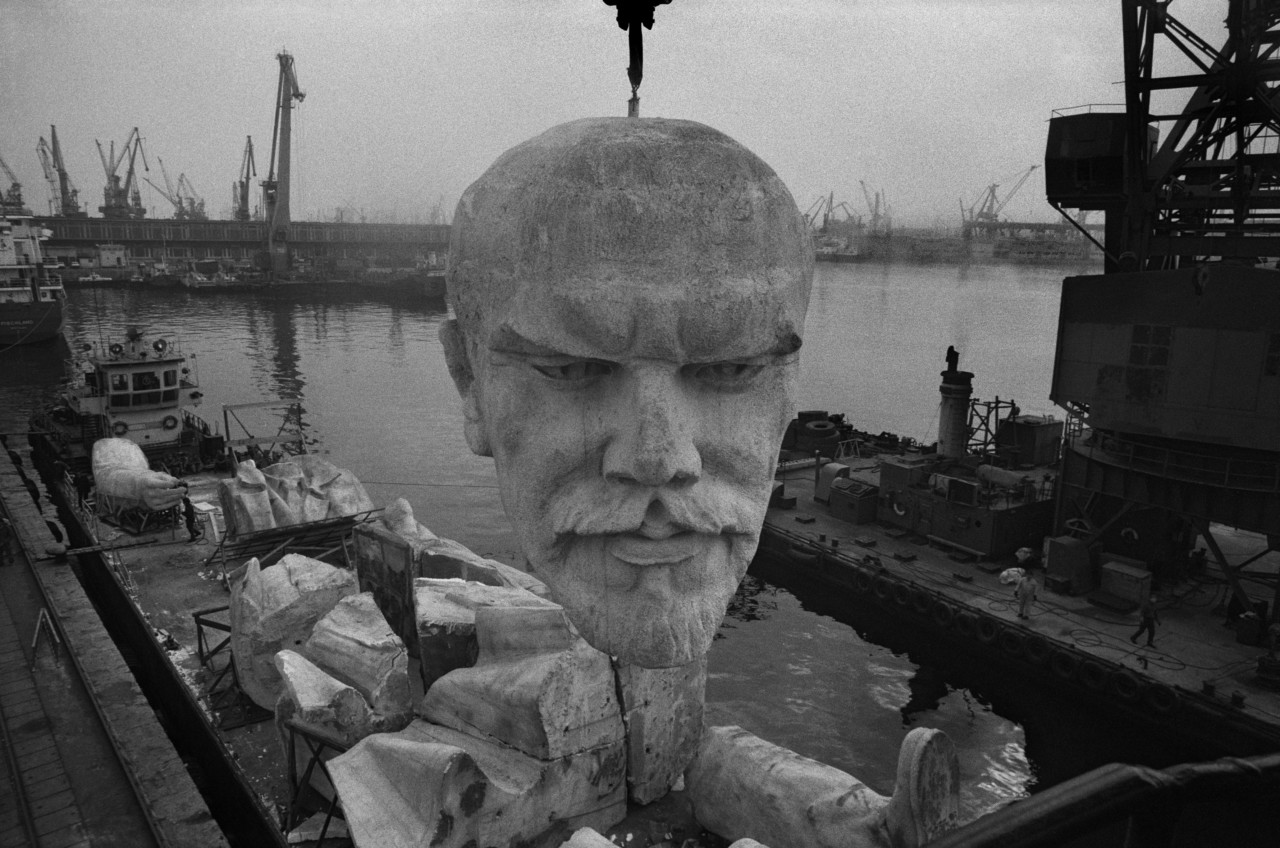 Josef Koudelka The head of Lenin, part of the props used on a barge during location shooting of the film 'Ulysse's Gaze'. Constanta. Romania. 1994. © Josef Koudelka | Magnum Photos
License |

Here, we look at Czech photographer Josef Koudelka‘s work made on the set of outsider epic, Ulysses’ Gaze.

When the Greek director Theo Angelopoulos released the film Ulysses’ Gaze in 1995 it was met with mixed reviews. After winning the Grand Prize at the Cannes Film Festival, one might have assumed that a similar reaction was echoed by all, but not everyone was to agree on its status as modern masterpiece. “A director must be very sure of his greatness to inflict an experience like this on the audience,” wrote the Pulitzer Prize-winning critic Roger Ebert in one notably caustic review for the Chicago Sun-Times. “I do not ask that he make [his audience] laugh or cry, or even that he entertain it, but he must at least not insult its good will by giving it so little to repay its patience.” The film’s enduring Rotten Tomatoes aggregate review leaves it simmering at a tepid 31%.

What was it about this enigmatic motion picture, then, that lured Magnum photographer Josef Koudelka – who had emphatically said, “For fifteen years, I didn’t work for anybody…never accepted any assignment, never photographed for money” – to accompany the crew on their journey in order to shoot behind the scenes? Josef Koudelka The Neretva Bridge built in 1566 under the reign of Sultan Suleiman, a stone arch 90 feet high, and made during the Turkish occupation. It was completely destroyed in November 1993 by Bosnian Croat (...)
tanks, in the foreground a postcard of what the bridge formerly looked like. Mostar. Bosnia-Herzegovina. 1994. © Josef Koudelka | Magnum Photos
License |

"On set, [Koudelka] lingered at the edges of the filming process, with evidently minimal interest in documenting the particulars of how a film is made in any technical sense, preferring instead to find his material in the lacunae..."

Ulysses’ Gaze is a loose retelling of Homer’s Odyssey (Ulysses being the Romanisation of the Greek name, Odysseus) – the epic peom in which the tale’s hero makes a circuitous ten year journey home from war to his waiting wife. Angelopoulos’ version takes the form of an epic filmic chronicle through 100 years of Balkan conflict and its consequences, set in part amid the ruins of what was once Yugoslavia.

It follows the protagonist – known only as A – a Greek movie director who is returning to his roots after several decades living in America on a journey through Greece, Albania, Macedonia, Romania, Bulgaria and Serbia. A is our Ulysses figure, a sensitive man with a penchant for poetic reflection played by Harvey Keitel, who is searching for some missing rolls of the first ever film shot in the Balkans. The film is perhaps best understood as a triple odyssey, three journeys woven together: primarily A’s retracing of his personal history, but also the history of the Balkans and the history of cinema. In this way, Angelopoulos can be seen as a modern-day Homer – the narrator-author who delivers us a tale both epic and tragic about A, a man on a quest, but an exile also. 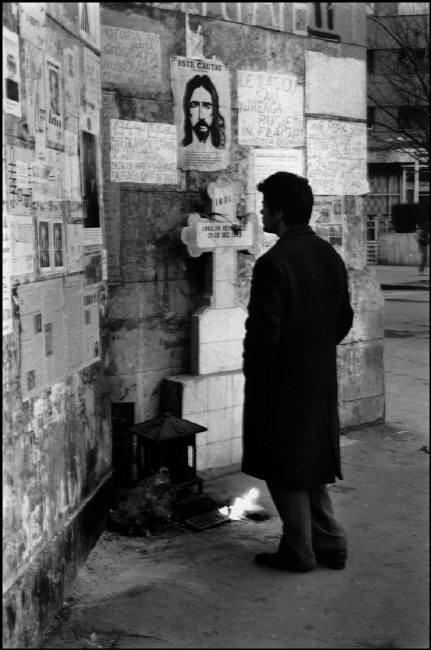 "All these moments merge together and swim in and out of vision, like fleeting recollections" 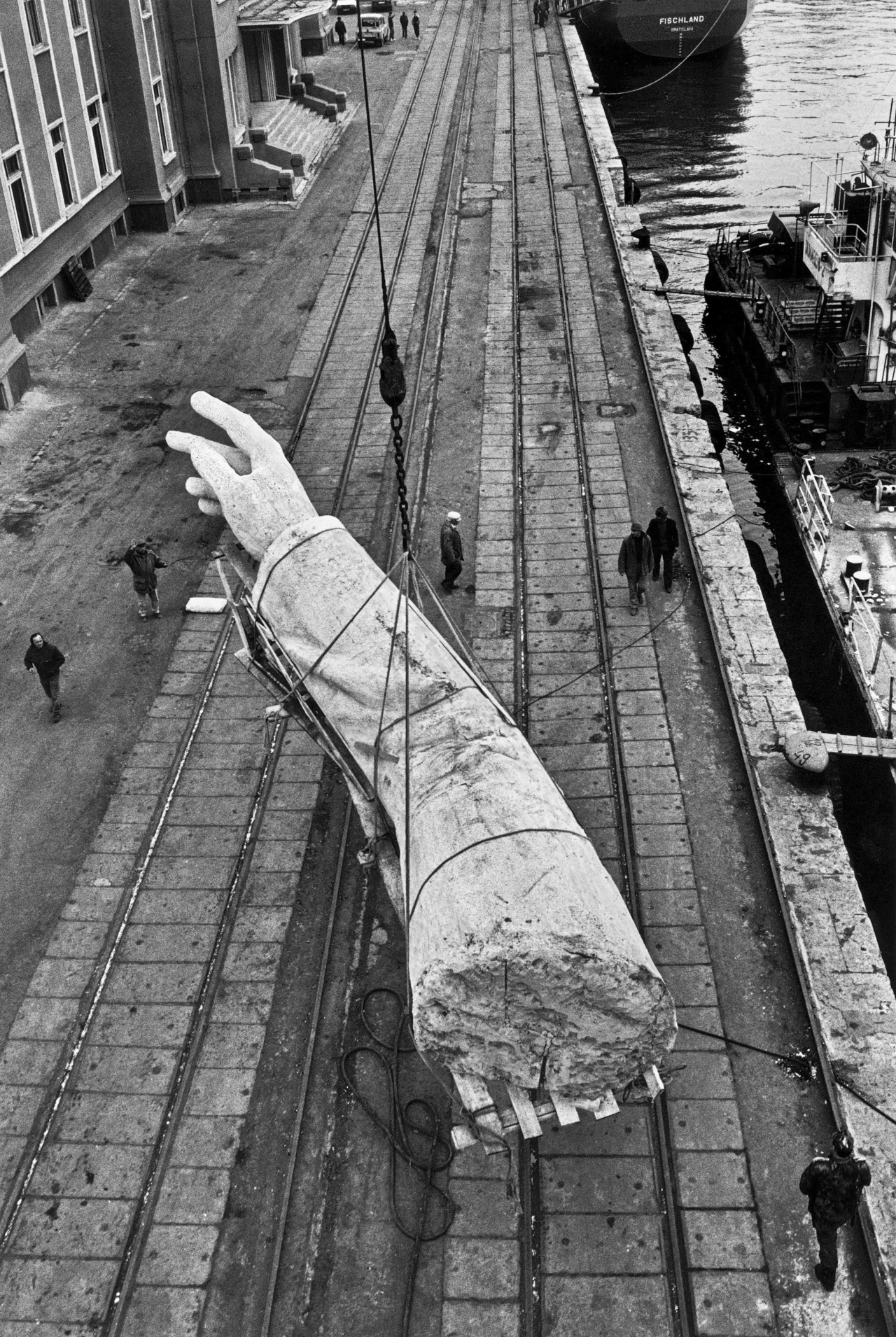 The concept of exile is important in consideration of Koudelka’s motives in making his work on set. As an artist whose identity has been strongly shaped by what he refers to as his own “constant state of exile”, Koudelka is known for his ability to distill the physical, emotional and spiritual states of displacement in searingly expressive ways. Across the years, his photographs have become symbols of political and social turmoil in the Balkan and Central European regions. His photographic documentation of gypsies and other minority groups have traversed borders and honed in on communities marginalised, forced into ‘exile’. Work that was all made while living out of a backpack and never staying in the same place for long. In this sense, the great voyage of Ulysses’ Gaze reflects Koudelka’s own journey of endless, restless discovery through the lens. 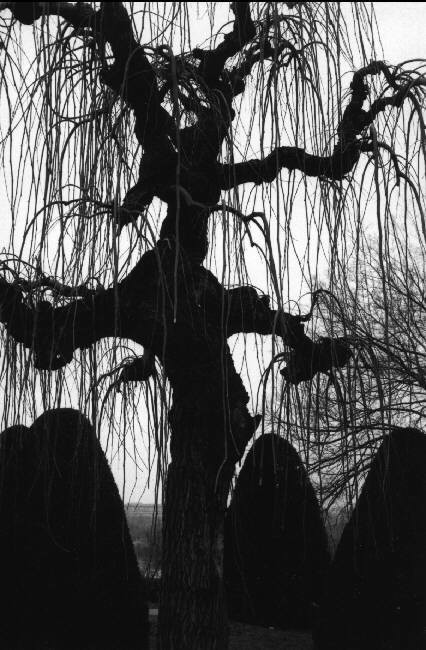 "Slowly, as the days went by, some of us began to dream of a totally new, imaginary film based on those photos, an illusory elliptic, sublime film" 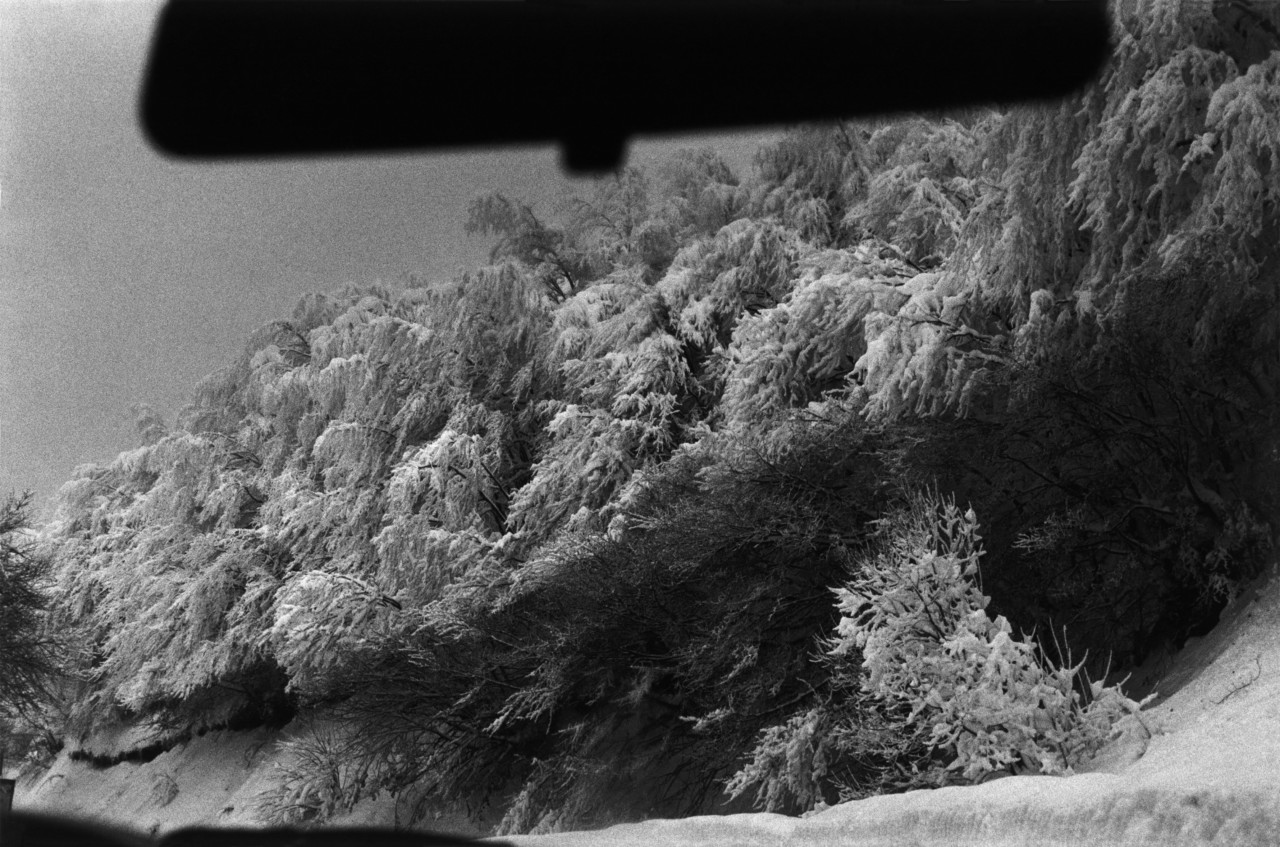 The characters in Ulysses’ Gaze are haunted by past recollections, manifested in flashbacks and transhistorical leaps across time, and Koudelka put something similarly layered together in his work. When on set, he lingered at the edges of the filming process, with evidently minimal interest in documenting the particulars of how a film is made in any technical sense, preferring instead to find his material in the lacunae – the gaps in shooting, the actors pacing between scenes, the sleeping children of the film’s extras who had nowhere else to go. Alongside this, he often turned his attentions away from filming altogether, to the specific social circumstances that were unfolding in the set’s surroundings. These photographs would become a time capsule in their own right. Thus between stills of the actors, we see a man begging in Bucharest, bullet-riddled road signs in former-Yugoslavian townscapes racked by civil war, and refugee reception centres in Albania. All these moments merge together and swim in and out of vision, like fleeting recollections, left where they are as the journey continues onwards but, crucially, made a part of the story, not forgotten. 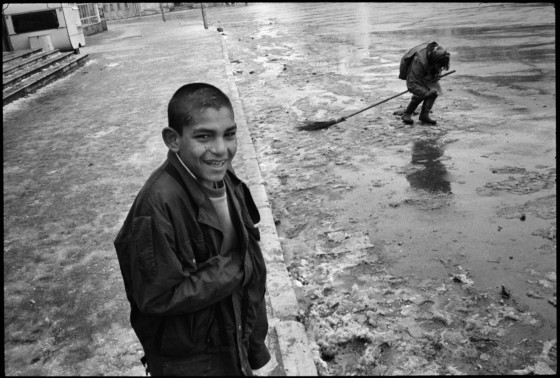 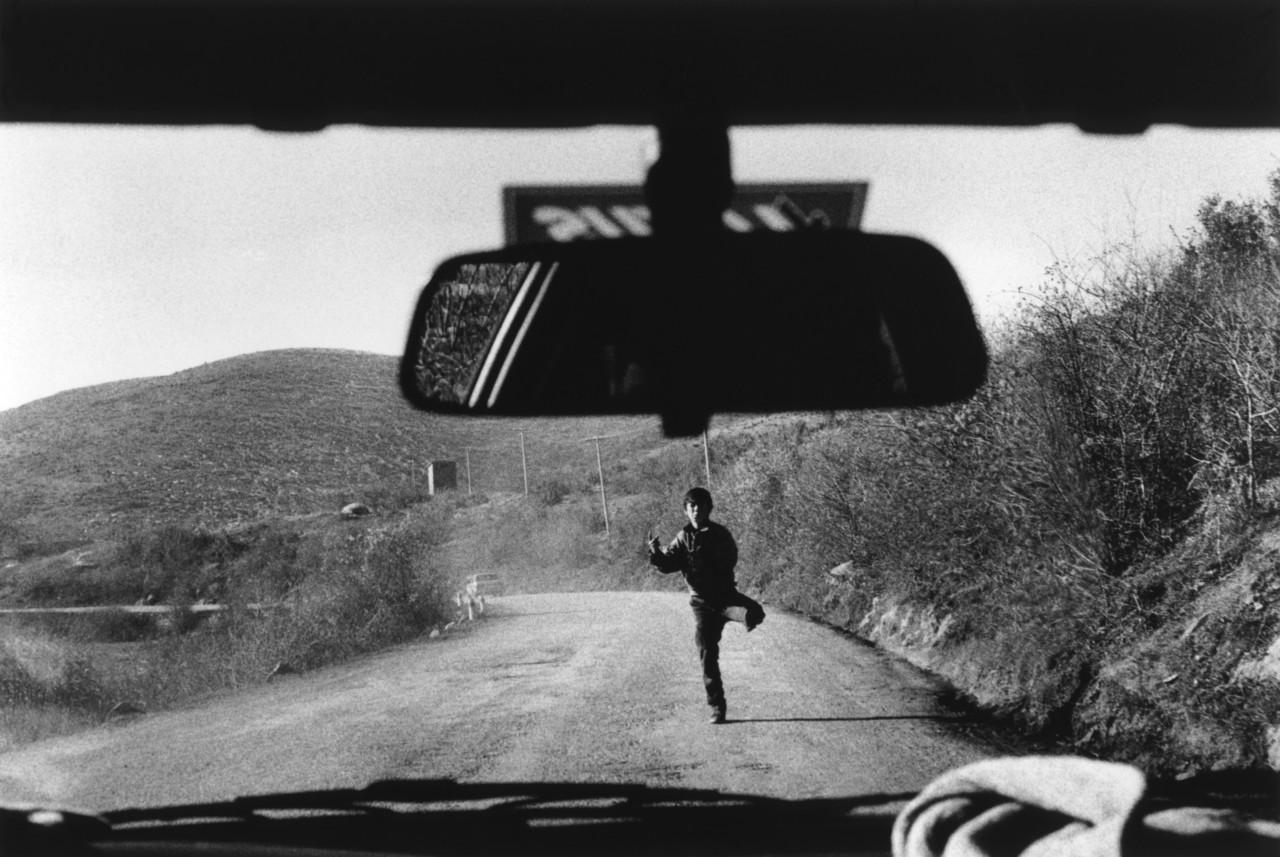 The resulting book of Koudelka’s photographs is entitled Periplannissis: Following Ulysses’ Gaze. Periplanissis is the Greek word for wandering. In the book’s introduction, Alain Bergala, who was working at Magnum Photos at the time, writes of beginning to receive Koudelka’s images: “Slowly, as the days went by, some of us began to dream of a totally new, imaginary film based on those photos, an illusory elliptic, sublime film. This meant of course that when it was shown to us we were the worst viewers, the least receptive to the beautiful picture Angelopoulos had directed. No film, no matter how real and complete, can resist a phantom one put together dreamily out of a few mystical photographs, most of which did not have a direct bearing on the shooting.” 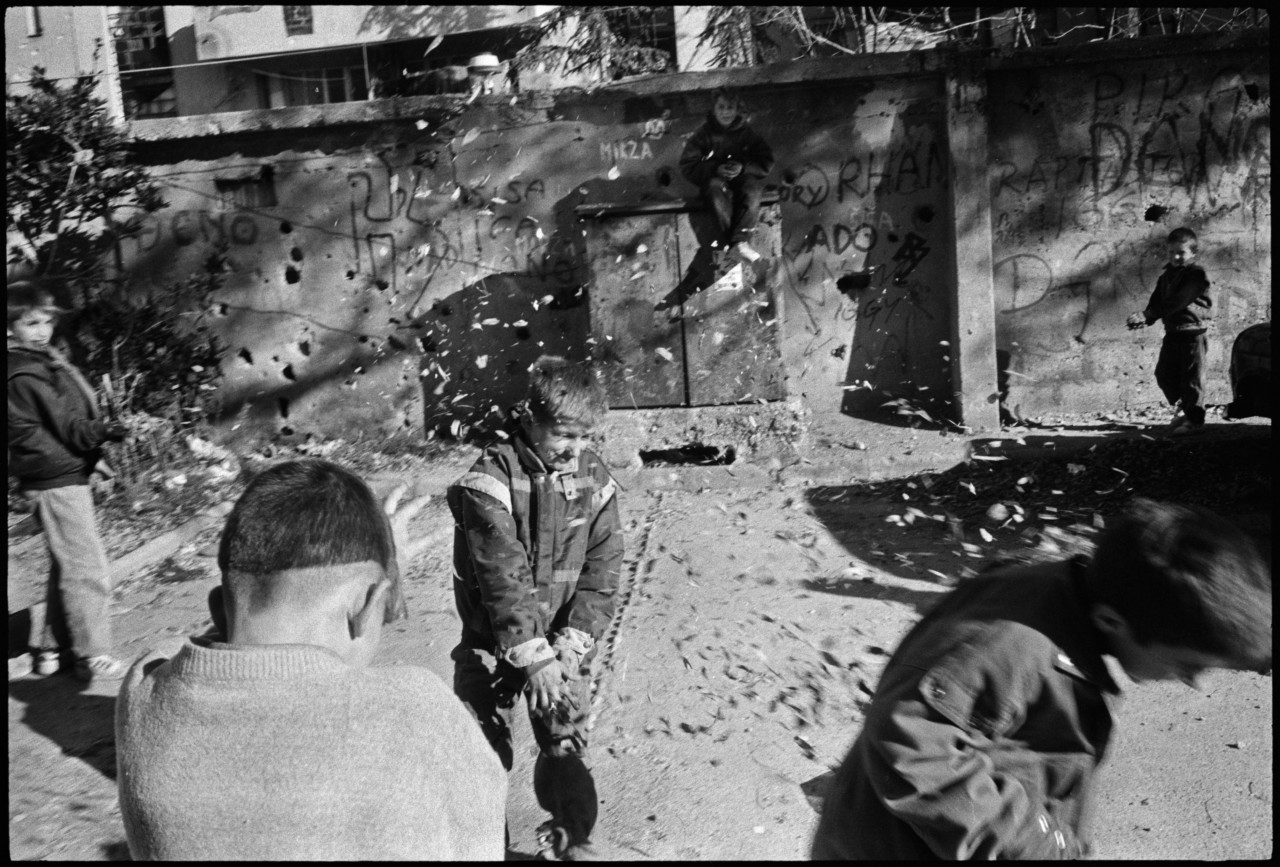 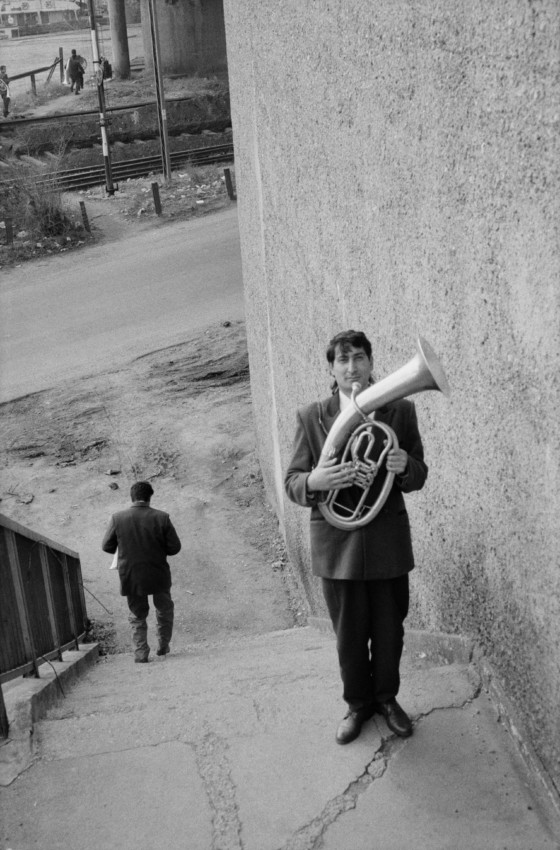 The entirety of Ulysses’ Gaze is made up of only around 60 shots, while the average film of a similar length would be constitured of over 1250. Scenes unfold at a leaden pace; the characters trudge, braced against icy winds, through settings both grim and melancholy. A central scene sees A travel on a barge transporting a colossal dismantled statue of Lenin, floating, moving almost imperceptibly along the Danube into the nothingness of the fog beyond; Koudelka captured the giant arm of this statue being hoisted onto the vessel. As Angelopoulos and his team meandered across borders, questioning how many must be crossed in pursuit of making it back homewards, Koudelka played the spectral observer, “putting together dreamily” his vision (as Bergala put it) and capturing that static, almost silent energy of the film in entirely his own way. 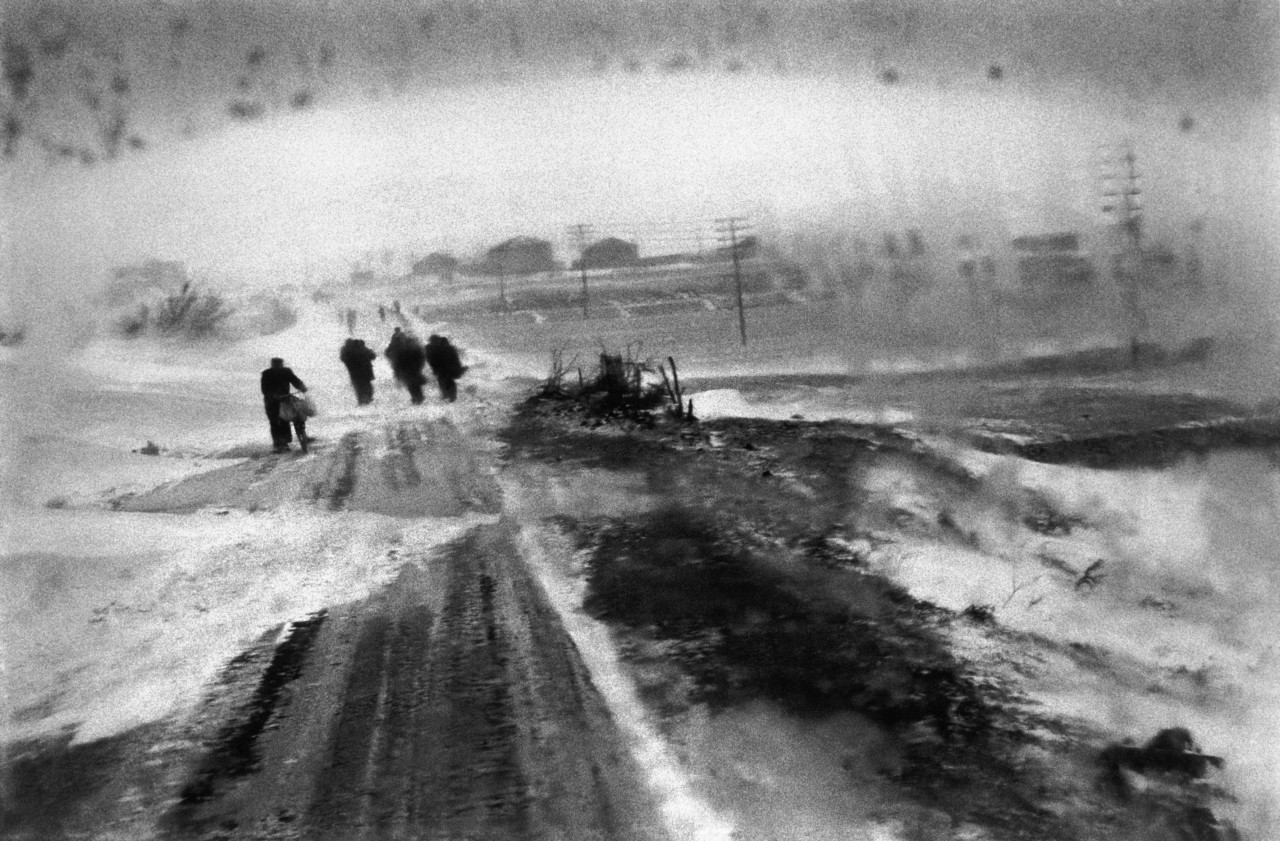