On the 30th anniversary of his death we look at the author and playwright's image, captured in the Magnum archive On December 22, 1989, the Nobel Prize-winning Irish novelist and playwright Samuel Beckett died. A man who shunned the limelight, his image became well known nonetheless, as did his often darkly pessimistic writings and plays that dwell on human nature, and life’s absurdities. Here, Mark Nixon, co-director of the Beckett International Foundation at the University of Reading and Galina Kiryushina, research assistant at the Centre for Irish Studies, Charles University Prague, reflect upon the scant images of Beckett to be found in the Magnum archive. Comparing contrasting visions of the man made by Henri Cartier-Bresson and Bruce Davidson, and noting the revelations to be found in Josef Koudelka’s rare photographs from a 1964 production of Waiting for Godot.

The more Samuel Beckett withdrew from public exposure, the more his image became iconic. The Nobel Prize winning author was a reluctant subject for both photographers and journalists, yet his face is now ineluctably etched into our cultural consciousness. Beckett’s extraordinary appearance – his handsome slender frame, long narrow fingers, taciturn expression and penetrating pale gaze – is as riveting today as it was in his lifetime, when it compelled some of the best photographers of the twentieth century to capture the inscrutable character of the man behind it. His calm disposition is mirrored in the steady unreadable look encountered in the many black-and-white photographs of the reclusive playwright, whose texts may at times seem equally impenetrable. Brassaï, Henri Cartier-Bresson, Gisèle Freund, and Richard Avedon, among others, have captured Beckett’s striking yet opaque features that over the years have come to reflect not only his elusive personality but also the complexity of his work. 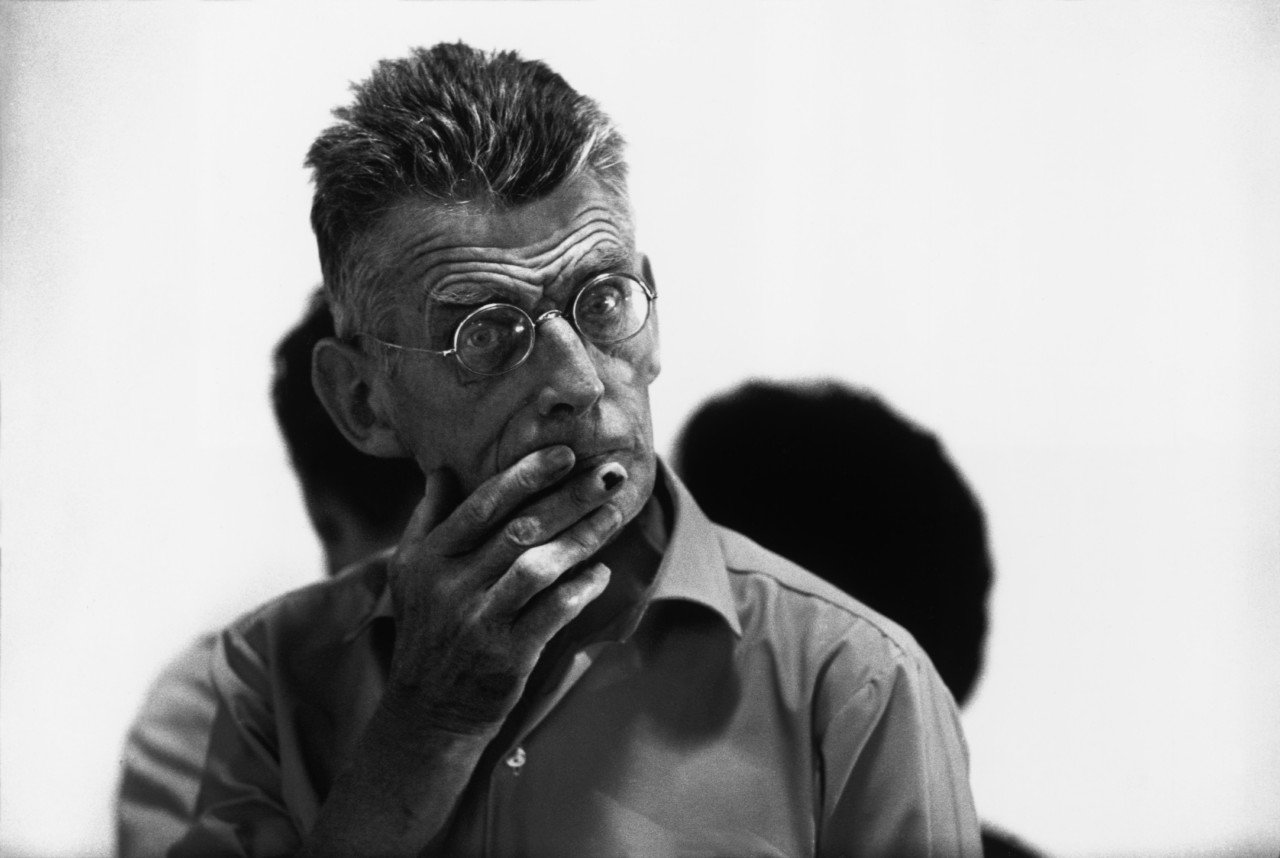 The Magnum Photos archive reveals two faces of Samuel Beckett on celluloid: though withdrawn from the surrounding world; whether in private or in public, he emerges as engaged and immersed in the work at hand. Bruce Davidson’s photographs, taken in New York during Beckett’s sole trip to the United States in the summer of 1964, are among the very few documents of Beckett’s intense engagement with the making of his only motion picture, Film. The modest curiosity with which he observed the often-chaotic filmmaking transpires in the series of Davidson’s photographs. Towering over the shooting script laid out on Alan Schneider’s director’s chair, on the other hand, Beckett epitomizes the omnipresent author-figure relentlessly overseeing the impeccable execution of his work. Beckett was notoriously known for the demanding exactitude he required of his actors and collaborators, which often transpires in the intensity of his demeanor. The degree of immersion in the working process is apparent in Beckett’s almost complete unawareness of the photographer’s presence on the set. 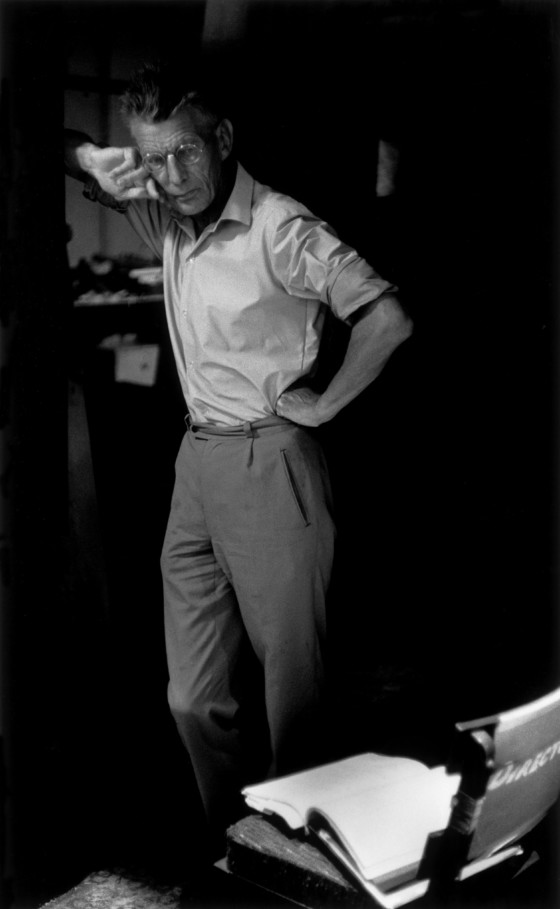 "Despite the private environment of his Paris flat in which they were taken, Beckett’s averted gaze and his stooped posture mirror the life-long uneasiness at his image or voice being forever fixed by the recording media..." 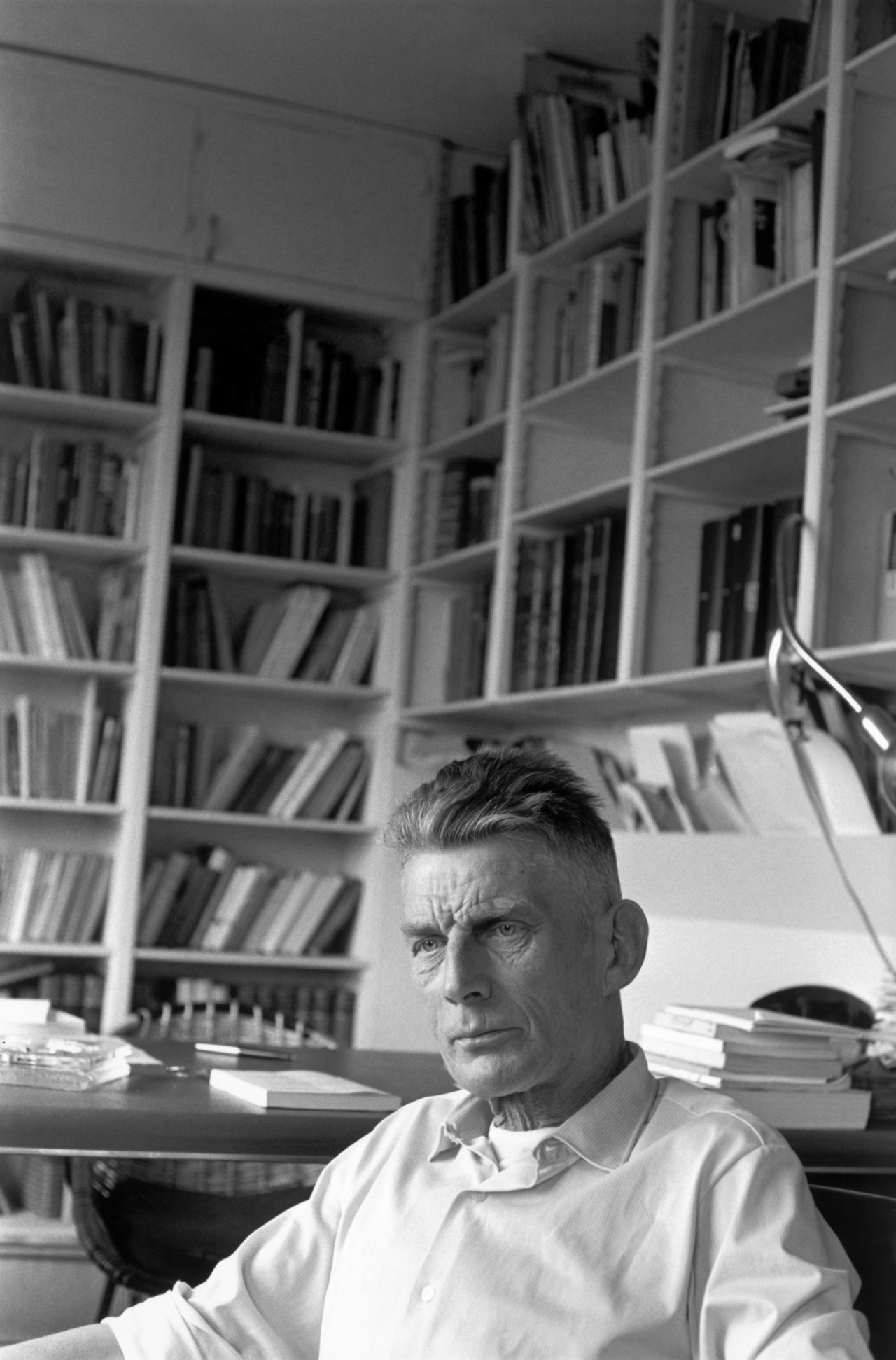 As a counterpoint to that, Cartier-Bresson’s photographs – notwithstanding certain spontaneity resisting their complete stylization – betray Beckett’s discomfort at being exposed to the lens of the camera. Despite the private environment of his Paris flat in which they were taken, Beckett’s averted gaze and his stooped posture mirror the life-long uneasiness at his image or voice being forever fixed by the recording media. Cartier-Bresson’s intention to capture the author in relation to his art – literature – results in a twin focus on Beckett and the books framing him. It is worth noting that Cartier-Bresson’s images are complemented by those of Gisèle Freund, who also photographed Beckett in his library that same year, 1964. 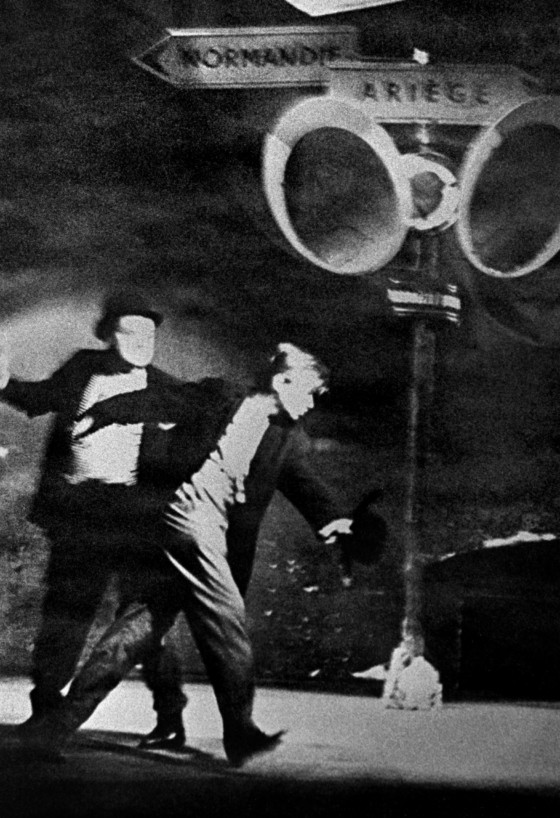 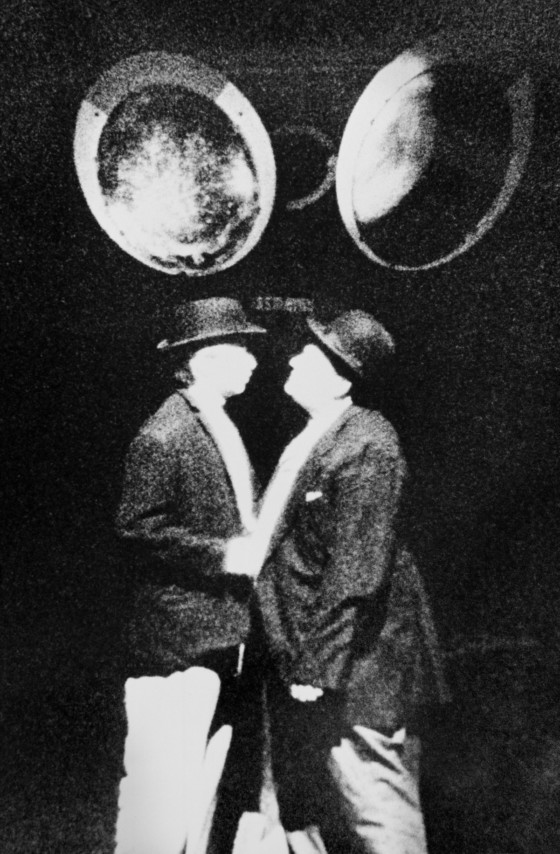 "Josef Koudelka’s rare photographs from the 1964 Czechoslovak premiere of Waiting for Godot at the Prague theatre Na Zábradlí, which is famously associated with the dissident-dramatist-turned-president Václav Havel, evoke yet another face of Beckett..." 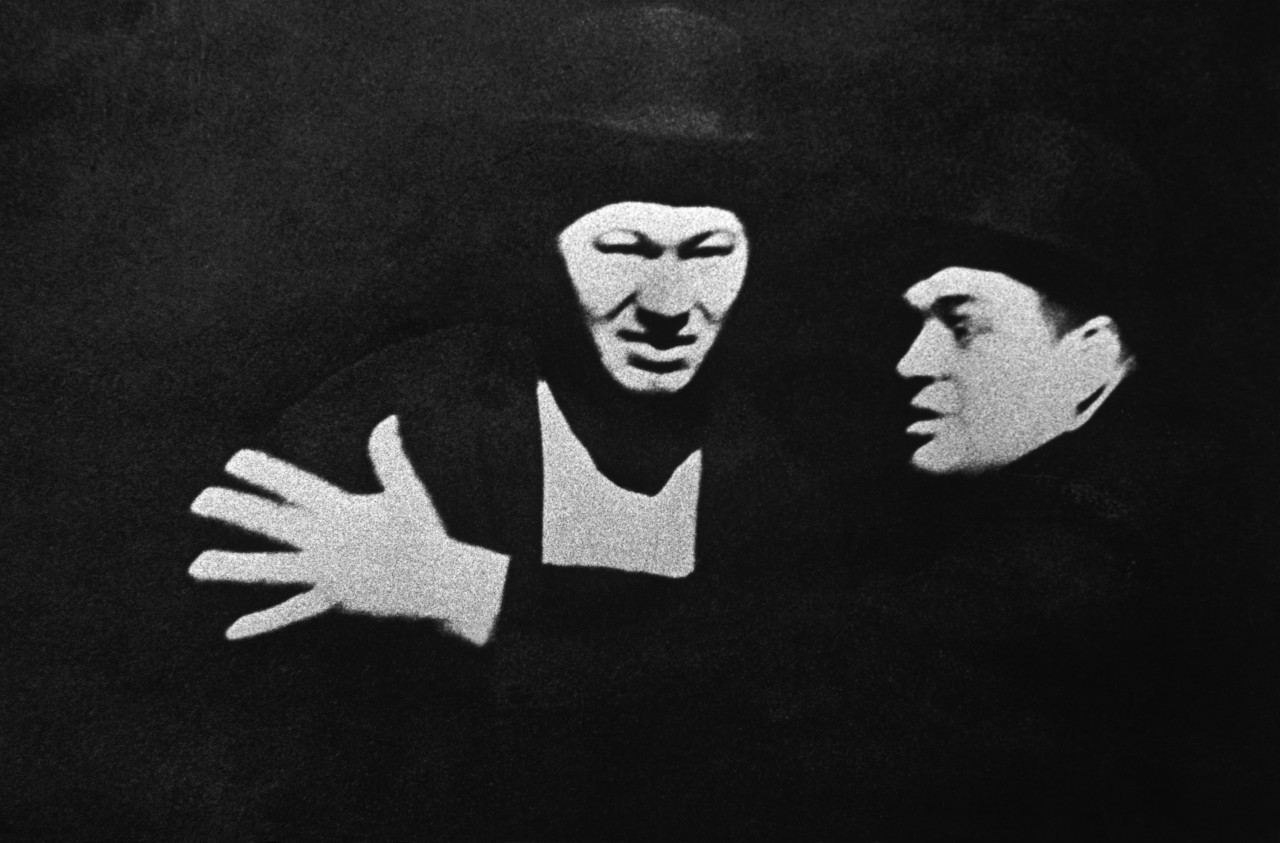 Josef Koudelka’s rare photographs from the 1964 Czechoslovak premiere of Waiting for Godot at the Prague theatre Na Zábradlí, which is famously associated with the dissident-dramatist-turned-president Václav Havel, evoke yet another face of Beckett. While largely seen as an apolitical author, Beckett’s personal investment in the questions of human rights is well known. More than a decade after Godot was banned from the stages of Czechoslovakia by communist censorship and with Havel taken political prisoner, Beckett dedicated an original stage drama, Catastrophe (1982), to him. While the play is more explicitly concerned with an allegorical representation of oppressive powers over an individual, Beckett’s biographer James Knowlson has also interpreted it as conveying ‘Beckett’s own horror at self-exposure’, for which he remains to be notoriously known to this day. 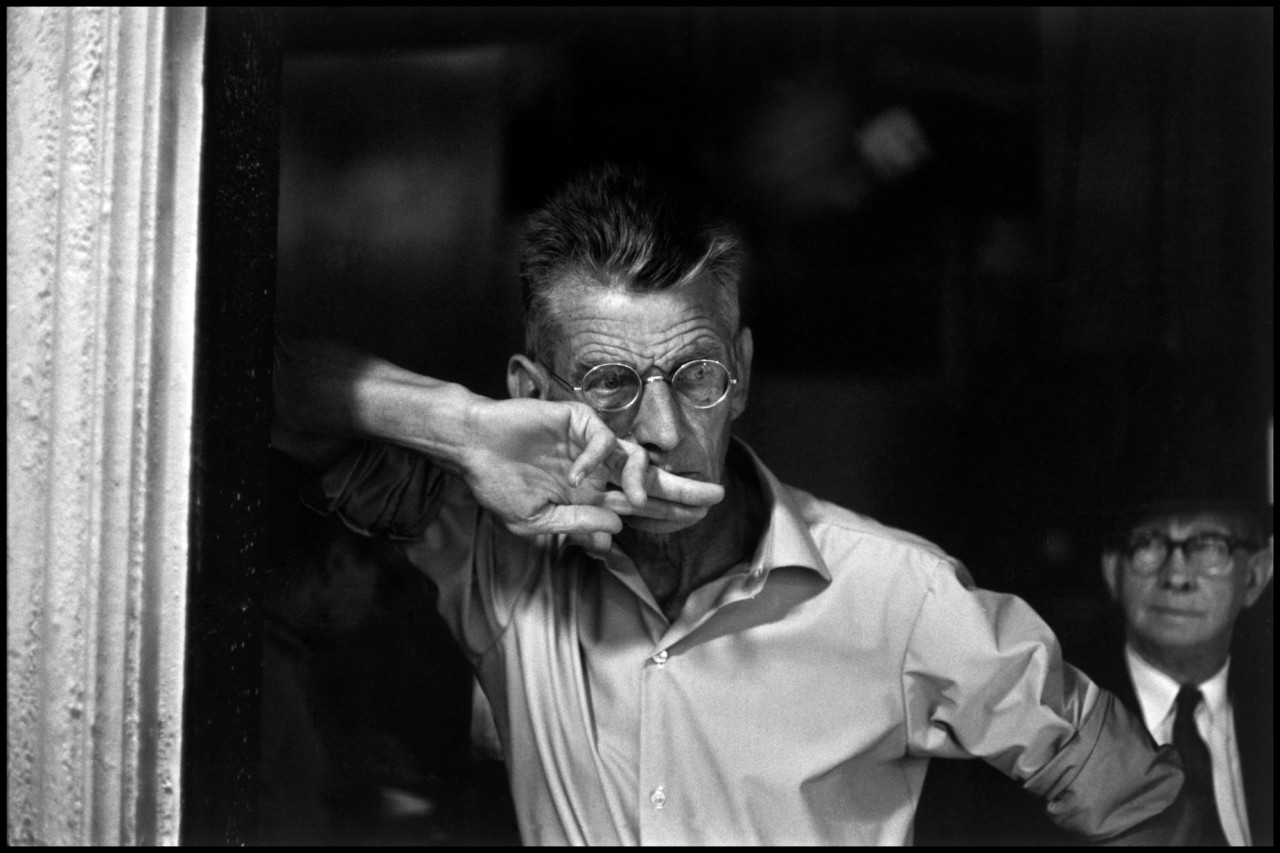