To mark the 80th anniversary of nylon stockings, Rosalind Jana looks at Magnum photographers' depictions of these items, from the comic to the seductive, from high-fashion to the quotidian 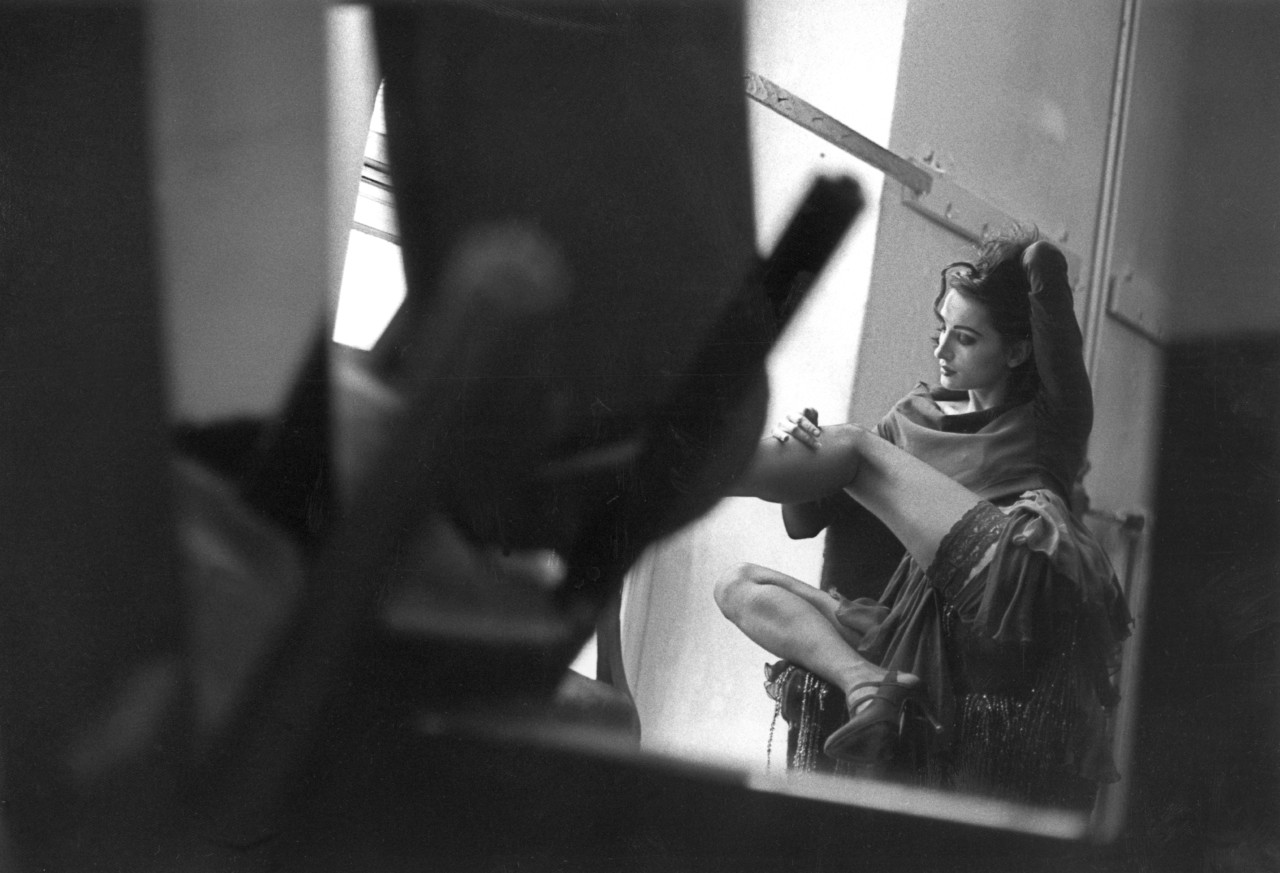 Eighty years ago this month, nylon stockings went on sale for the first time. Having caused consternation when first exhibited at the World’s Fair in New York in the late ’30s, they weren’t accessible to the general public until May 1940. But for a brief window of time beginning in October 1939, the residents of Wilmington, Delaware could queue up to buy this miraculous new innovation for $1.15 a pair.

Why Wilmington? It was home to the headquarters of DuPont: the company responsible for inventing nylon. After years of research, they’d finally devised the first man-made fiber that could be created entirely in a laboratory. Made of a long-chain polymer that the company claimed was “as strong as steel, as fine as a spider’s web,” its potential uses were myriad, from toothbrushes to surgical sutures. However, the company chose stockings as its figurehead item with which to launch nylon into the world. It was a canny decision. Although other semi-synthetic fabrics existed – such as rayon – none as yet could offer sinuous proximity to silk – the stocking fabric of choice – whilst simultaneously offering better elasticity and durability. 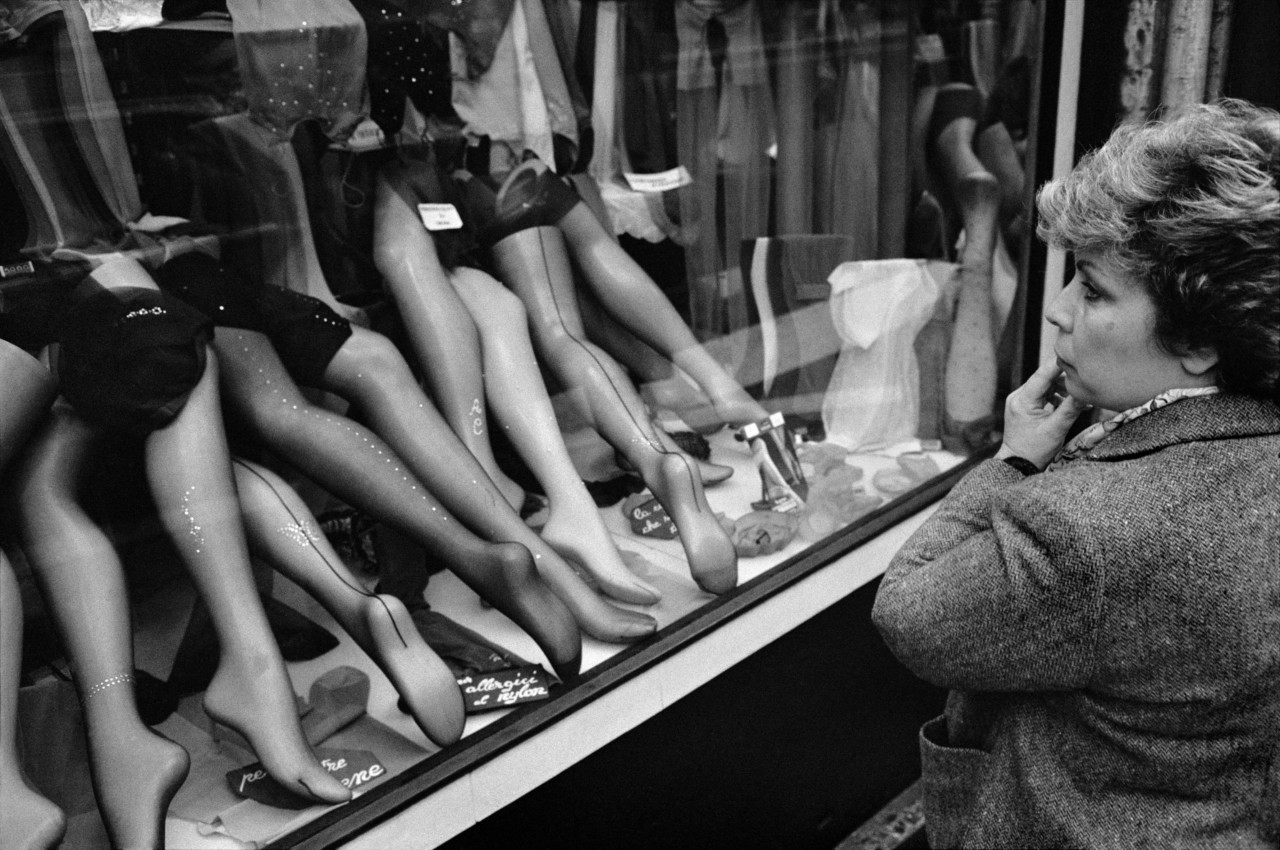 It worked. Within a year of going on national sale, 64 million pairs had been sold in the United States.

However, their initial popularity was short-lived. America’s entry into World War II put a temporary stop to the sale of nylon stockings; the fabric instead was diverted for the production of parachutes, tents and other military paraphernalia. The scarcity of stockings – whether silk or nylon – on both sides of the Atlantic during the war is well documented: tales of women staining their legs with gravy or make-up to mimic hosiery and painstakingly drawing lines up the backs of their legs to give them the appearance of seams now part of historic sartorial lore. 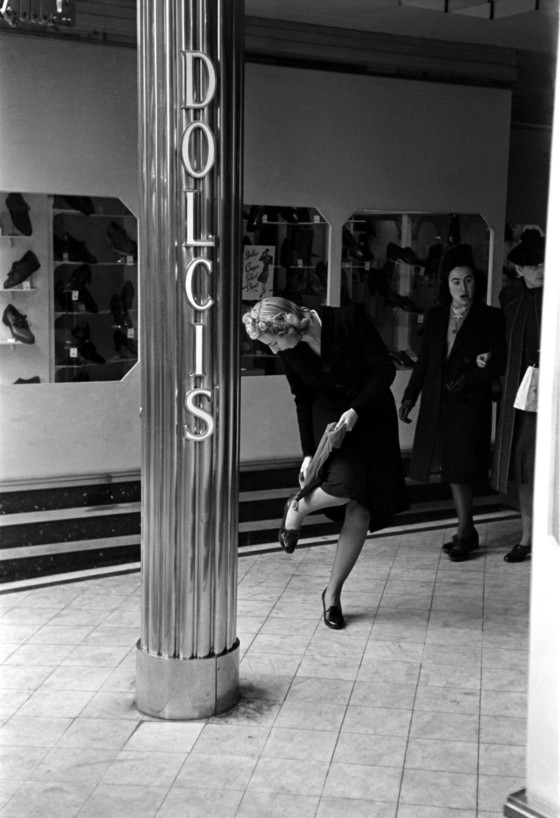 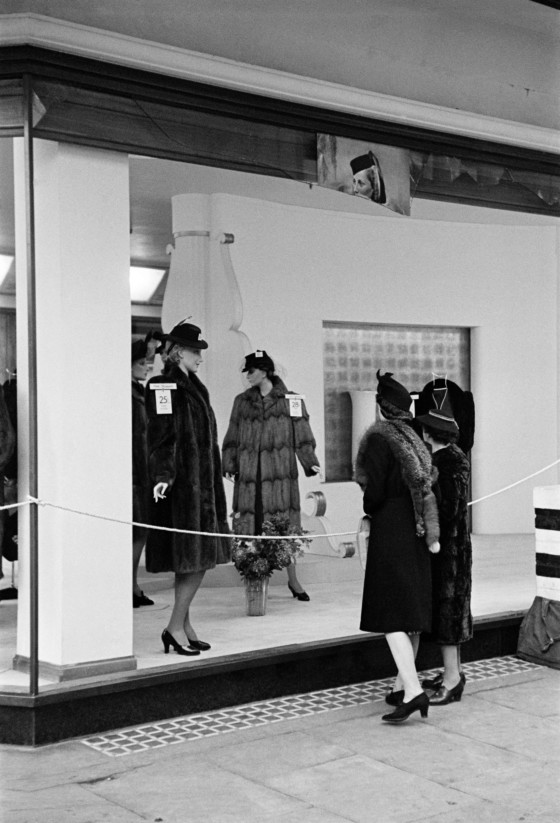 In George Rodger’s photos of female shoppers on Oxford Street in 1940, we see the context to this time period where consumers were suddenly consigned to Utility stockings: typically made from less comfortable fabrics like wool and rayon. It was an unwelcome change. As one British newspaper article from 1943 declared, “A snooper, eavesdropping on any group of civilian women anywhere, might be puzzled that it could talk so emotionally and so incessantly about stockings.” When the war was over DuPont swiftly put nylons back on sale – the resultant queues of thousands of women across America all desperate to get their stockings leading to breathless newspaper headlines about ‘Nylon Riots’.

The frenzy over something as simple as a pair of stockings might seem curious today, what with the abundance of five-packs of tights and the option of spending all winter wearing trousers available if one wishes. The former, their origins found in the rudimentary sewing of nylon legs to a pair of stretchy briefs for the first time in the late ’50s (just in time for the ’60s’ sudden obsession with the mini-est of mini skirts), still make for a much more comfortable option. One that, at the time, allowed women to go without the strictures of a girdle or garter belt. One that eventually led to our current perception of stockings as something largely consigned to the realms of retro dress-up (as per Chris Steele-Perkins’ photos of Teddy Boy Weekenders) and the sexier end of the lingerie spectrum. 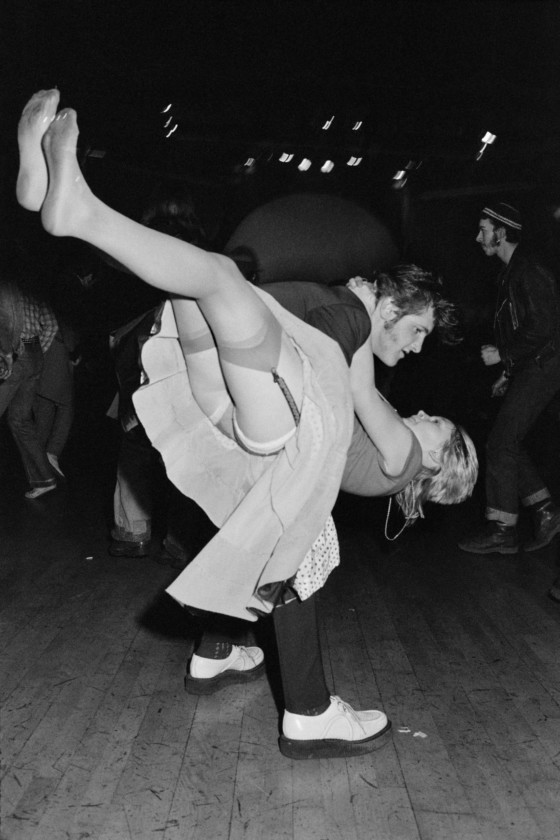 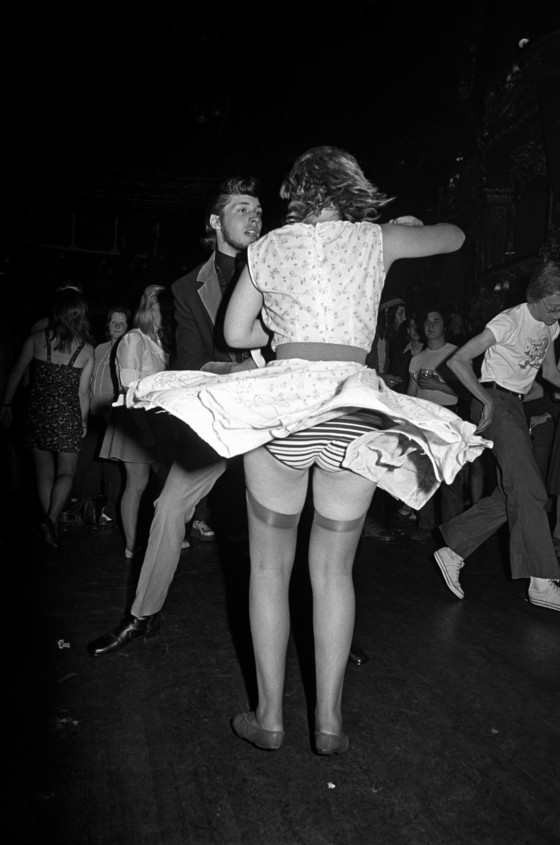 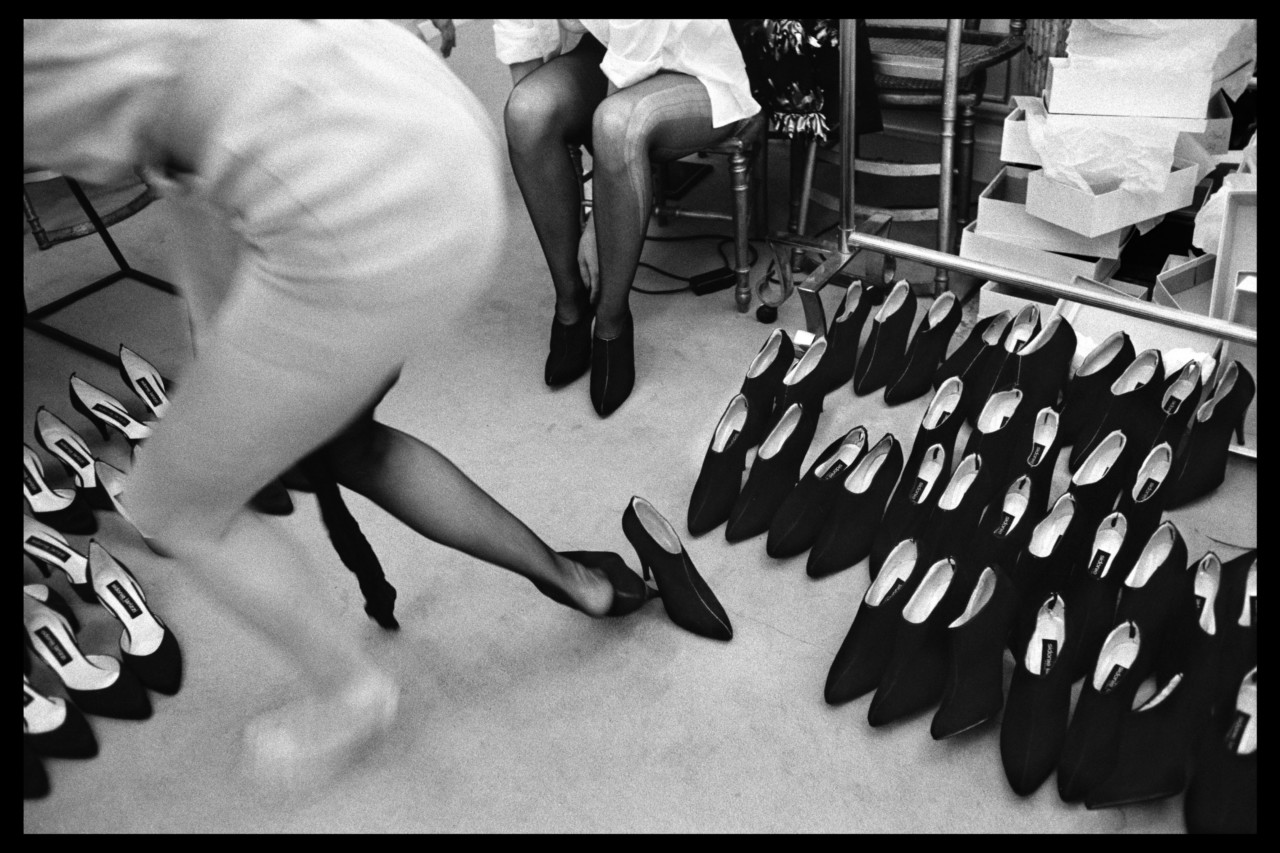 Stockings have perhaps always possessed a potential erotic appeal though. From the fishnets of the thirties worn by cabaret stars to Frank O’Hara’s much-repeated line “that’s not a run on your stocking, it’s a hand on your leg,” the sensual possibilities of hosiery are long-lived. Perhaps it’s something to do with the relationship between skin and fabric: the sheerness of a material that both conceals and reveals, as well as the potential, glamorous glimpse of bare thigh where the stocking ends. Maybe it’s a tactile allure too, complete with the careful rolling (or unrolling) of a stocking over one’s knees. Or it could just be that it forms another playful accessory for the nearly naked body. 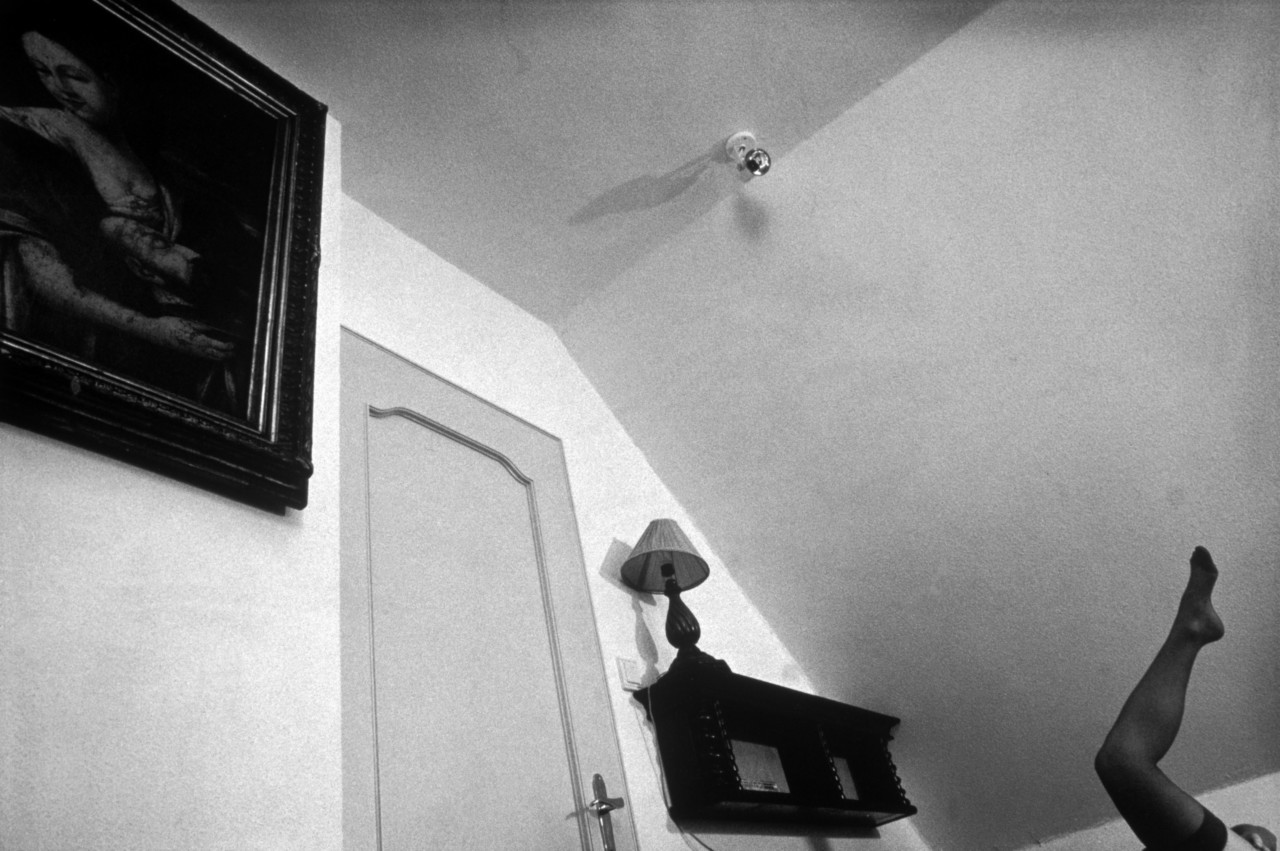 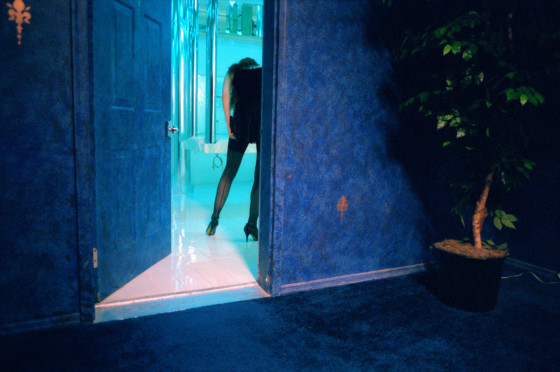 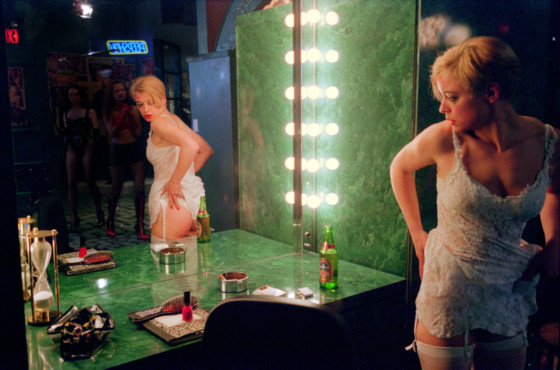 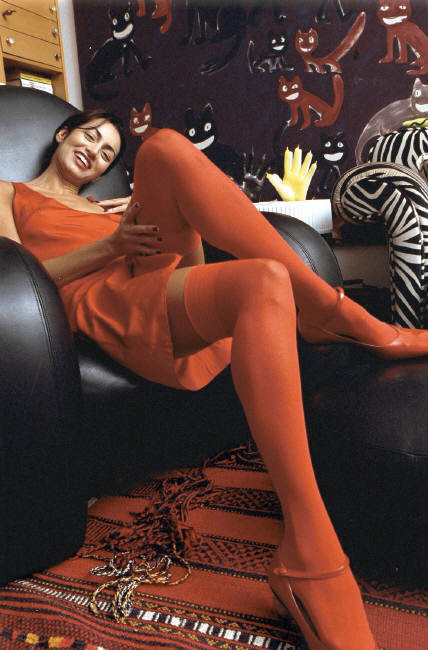 Elsewhere, Ferdinando Scianna repeatedly returns to stockings in his fashion work and portraiture. In a shoot from 1991 inspired by Egon Schiele the model wears stockings in a series of reds, whites, and blacks (an appropriate homage to a painter whose near-nude figures were often clad in jewel-bright stockings), directing her gaze towards the camera at times, seemingly caught in introspective moments of getting dressed elsewhere. The stocking tops are deliberately visible: legs artfully arranged to allow a flash of lace or garter. 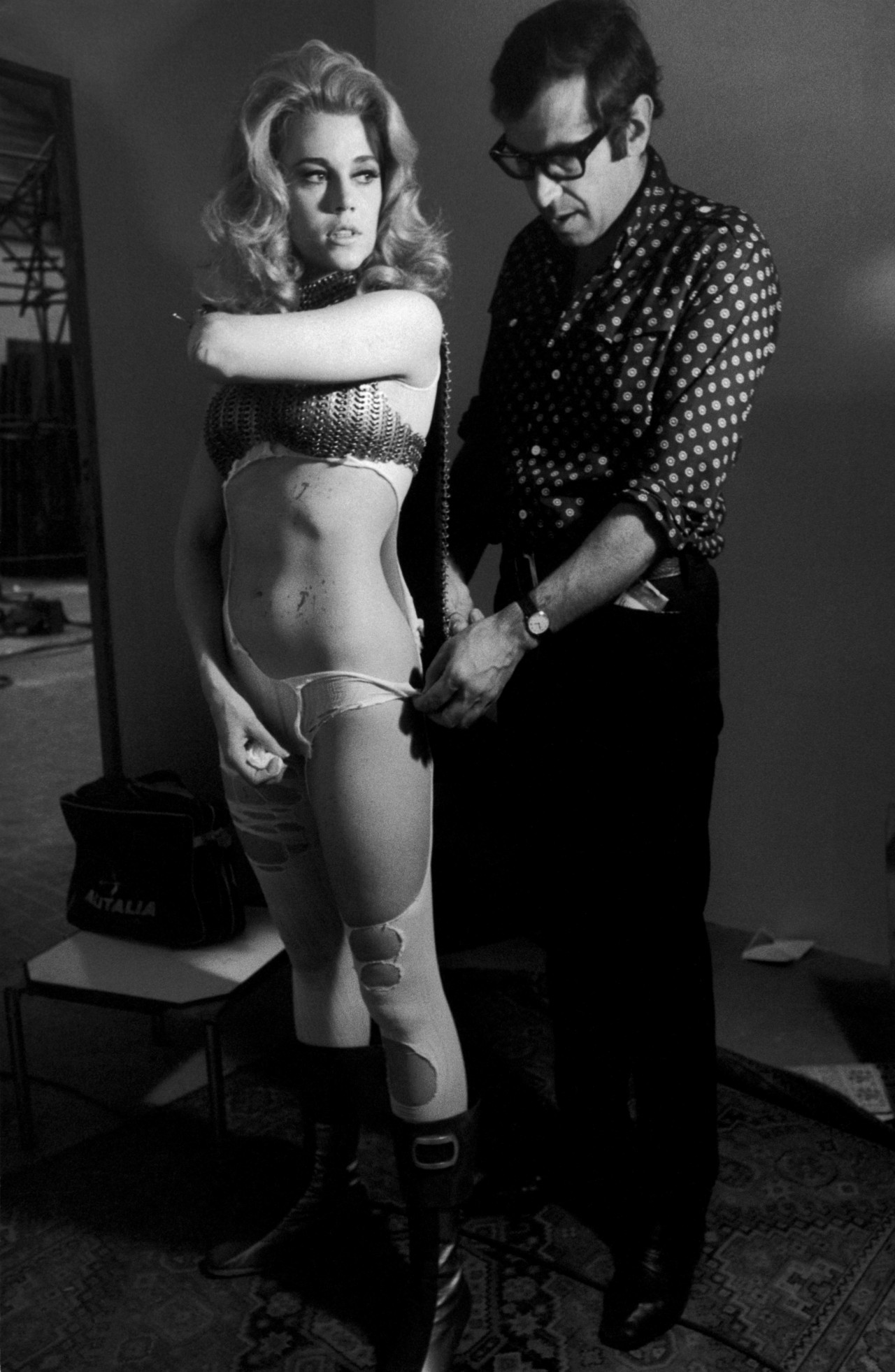 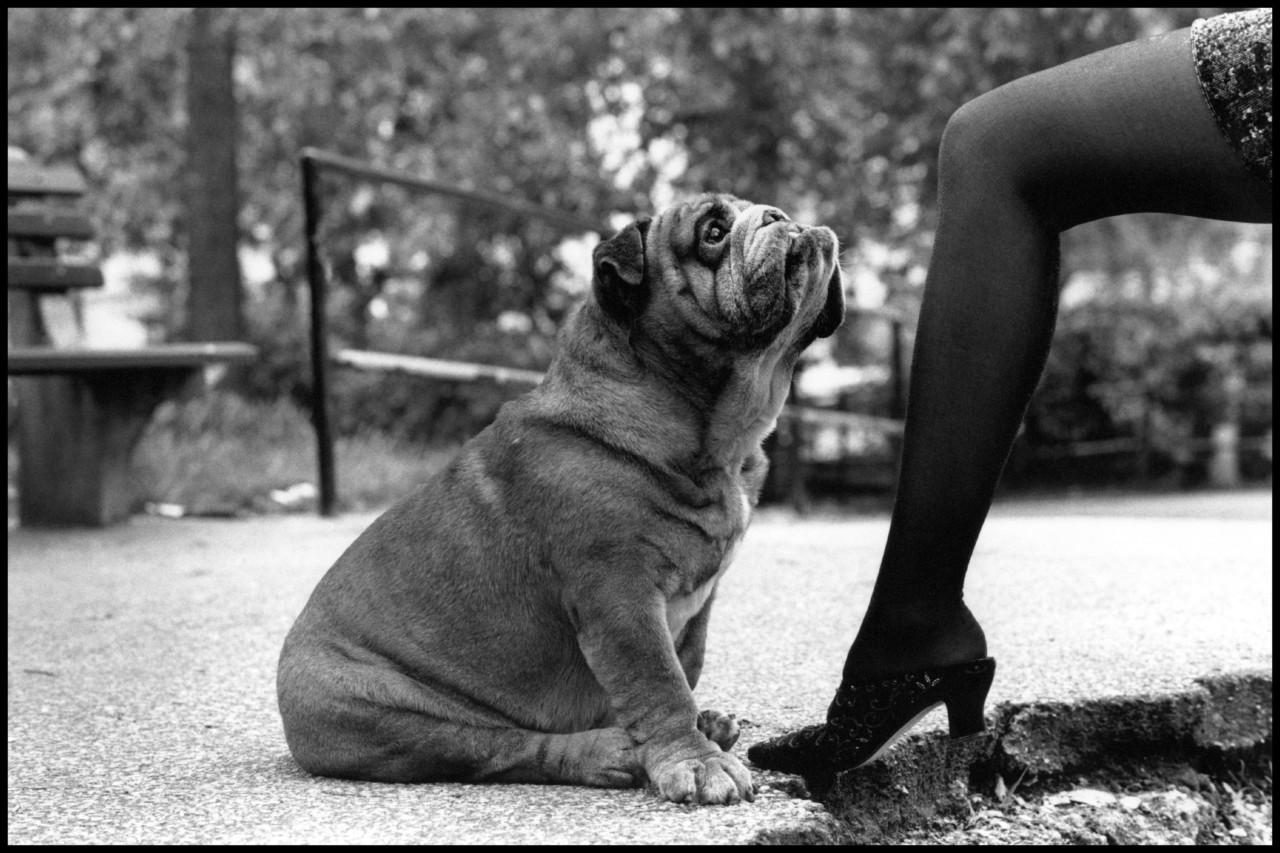 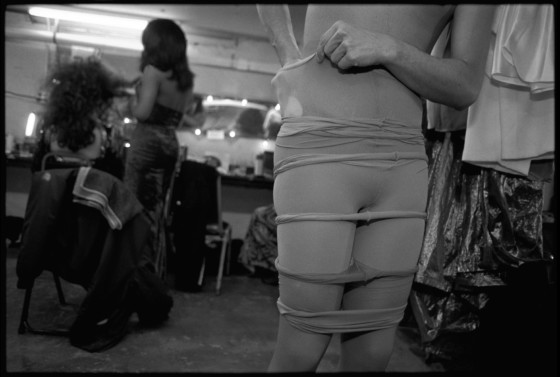 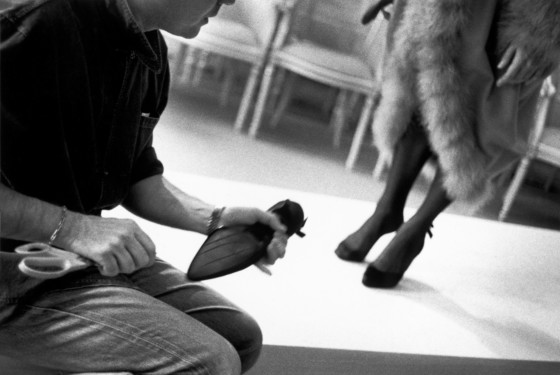 There are other contexts in which hosiery – not just stockings, but tights too – feature. There is a profusion of photos that focus solely on limbs: Elliot Erwitt’s closely cropped pictures of legs and dogs; Guy le Querrec’s in-situ documentation of a fashion fitting in Paris in 1985, the model’s legs divided between one in a stocking and high heel, the other bare in a flat, white pump; Chien-Chi Chang’s close up of a torso at the Miss Gay Maryland Pageant in 1995, the subject wearing six layered pairs of tights, each rolled to a slightly different length; Christopher Anderson’s seamed stockings and blue soled heels at a fashion party; Gueorgui Pinkhassov’s image of hosiery clad legs on a billboard ad in Shanghai, a forest of vast, smooth thighs and calves in focus while a blur of people pass below them. 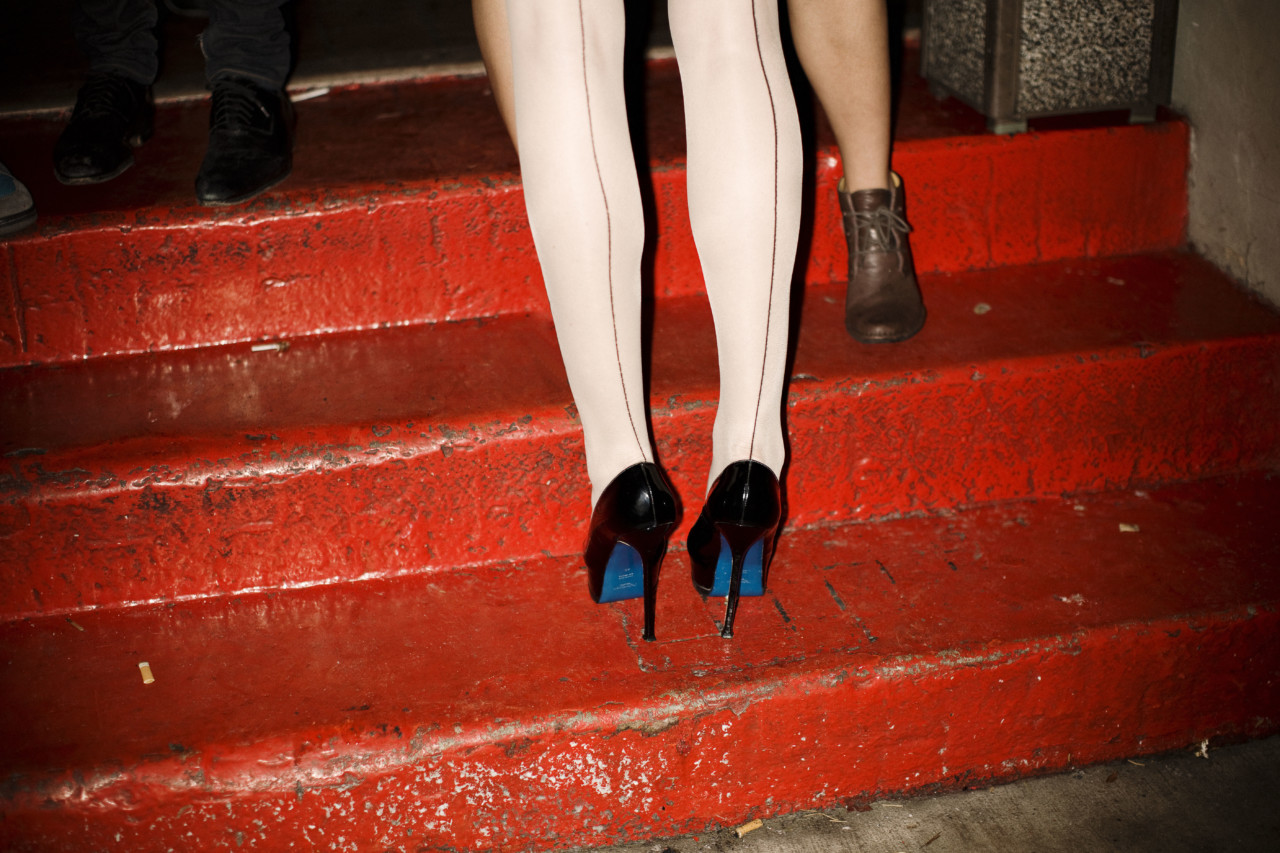 "These images fleetingly capture just some of the ways that stockings have been seamed through the recent history of dress and photography: ever evolving in meaning..." 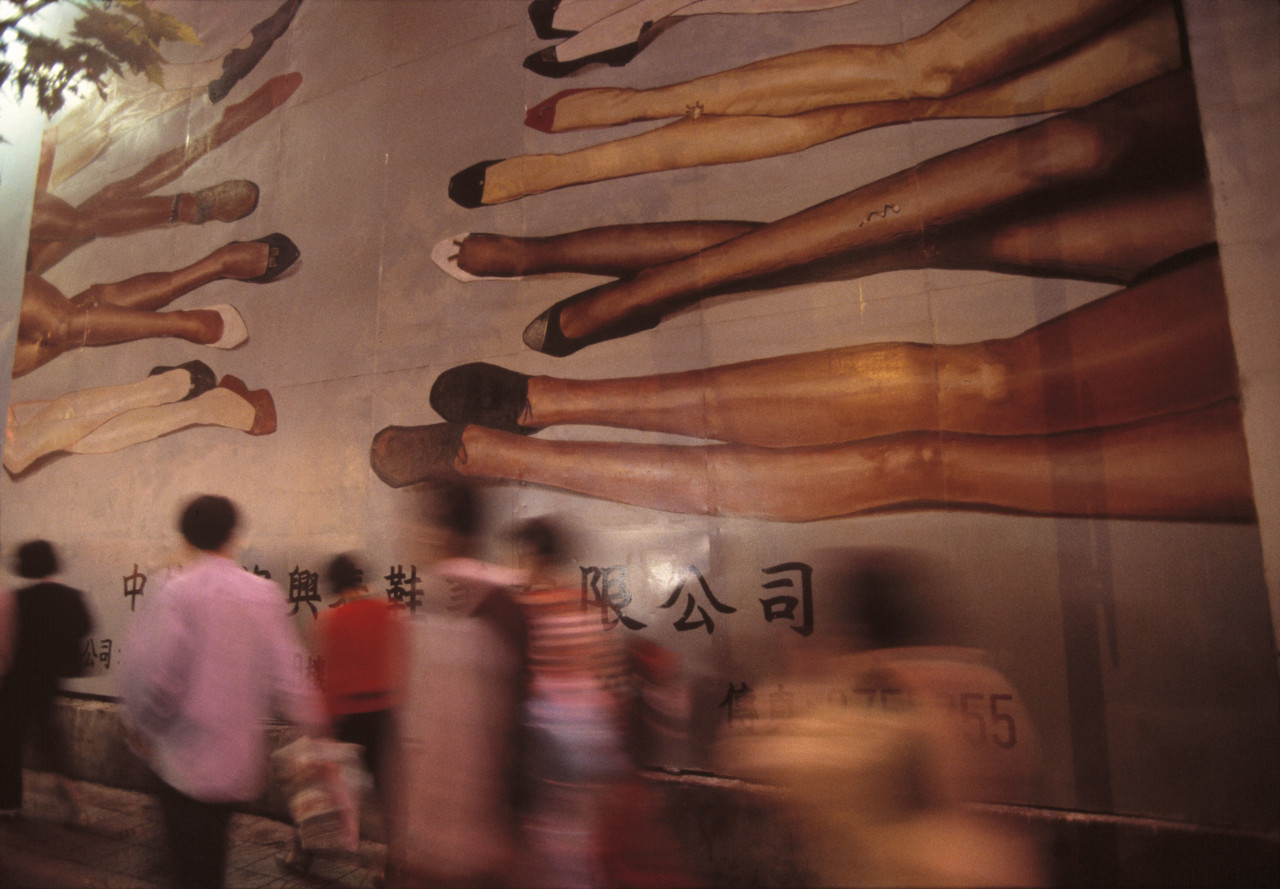 Sometimes the limbs aren’t there at all. Disembodied stockings possess other, stranger qualities – suddenly flimsy, almost alien. In Eve Arnold’s quiet photo from 1961 a young woman takes a bath: steam half fogging the mirror behind her and rising towards the clothes-line of undergarments strung above the tub, stockings pegged upside down by their toes alongside several pairs of knickers. They take on a ghostly appearance, slinking through the center of the photo like vines. Leonard Freed’s 1958 photo taken in Naples takes a more amusing approach, playing with the pleasure of revelation, when the viewer notices a baby asleep among the soft piles of knotted stockings on a market stall. 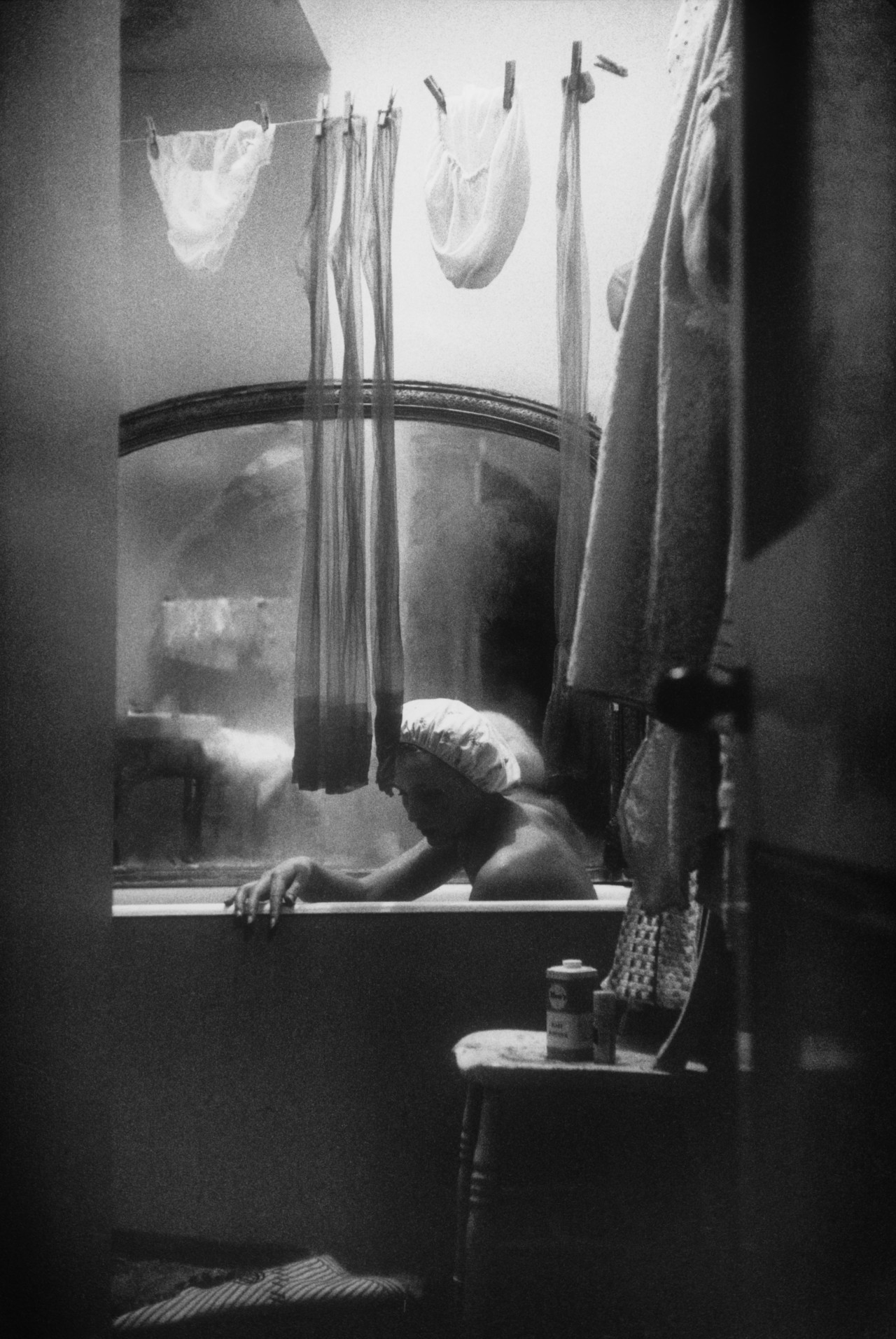 "Sometimes the limbs aren’t there at all. Disembodied stockings possess other, stranger qualities..." 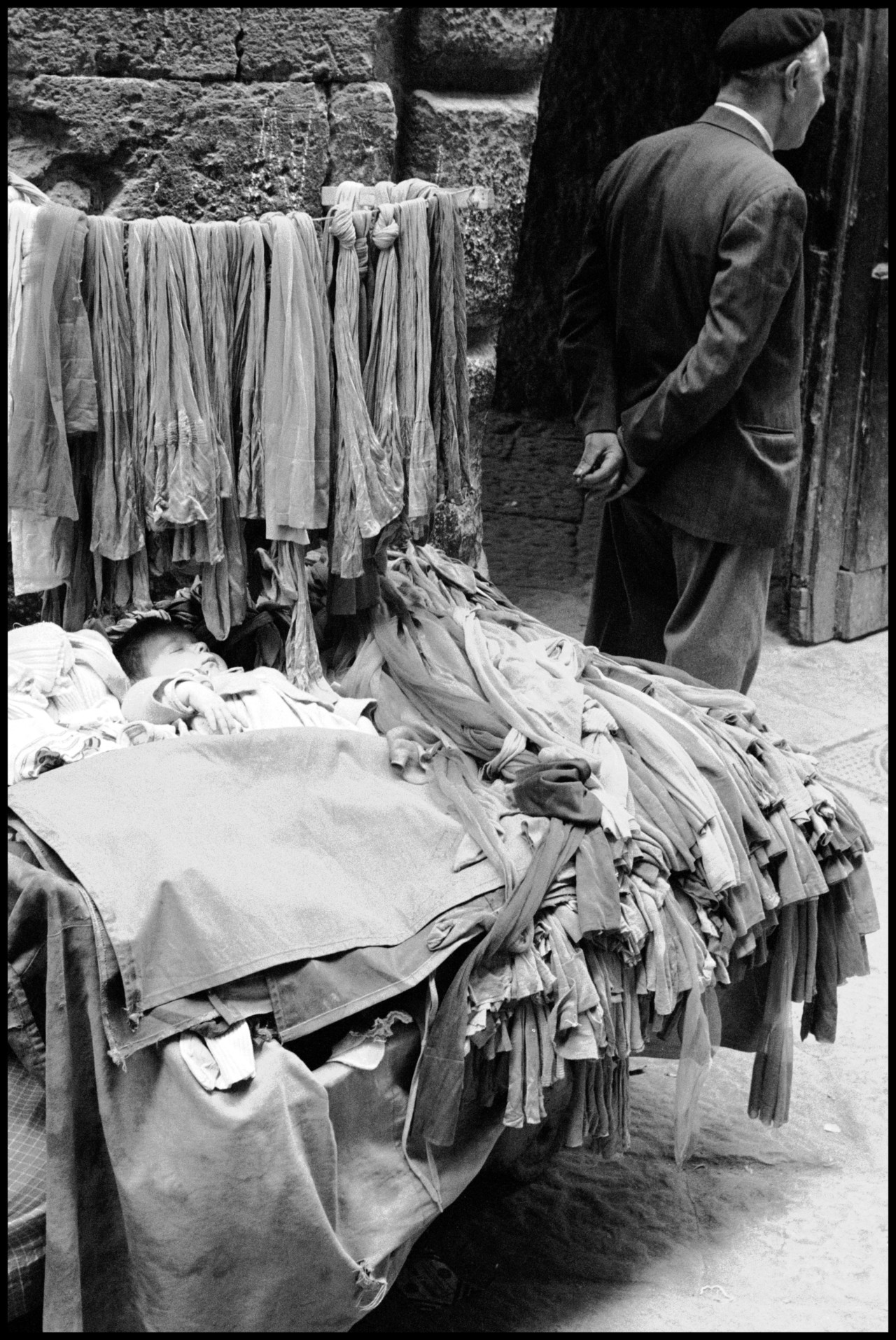 Full-body or tightly focused, intimate or hyper-erotic, elegant or practical, these images fleetingly capture just some of the ways that stockings have been seamed through the recent history of dress and photography: ever evolving in meaning; offering possibilities both charged and mundane; sometimes surreal or sexy or subversive, and sometimes just the perfect bedding material for a slumbering child exhausted by the busy market around them. 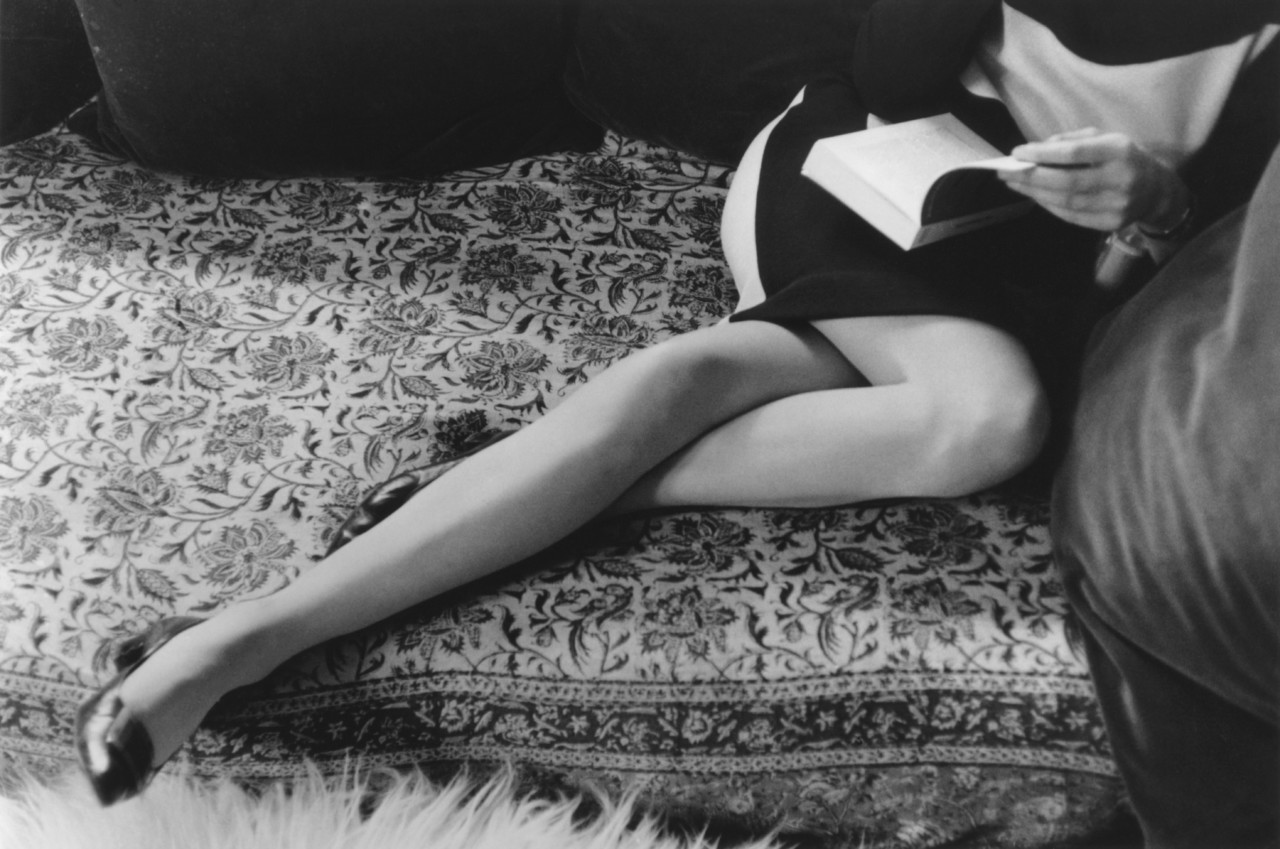 "Stockings have been seamed through the recent history of dress and photography: ever evolving in meaning; offering possibilities both charged and mundane" 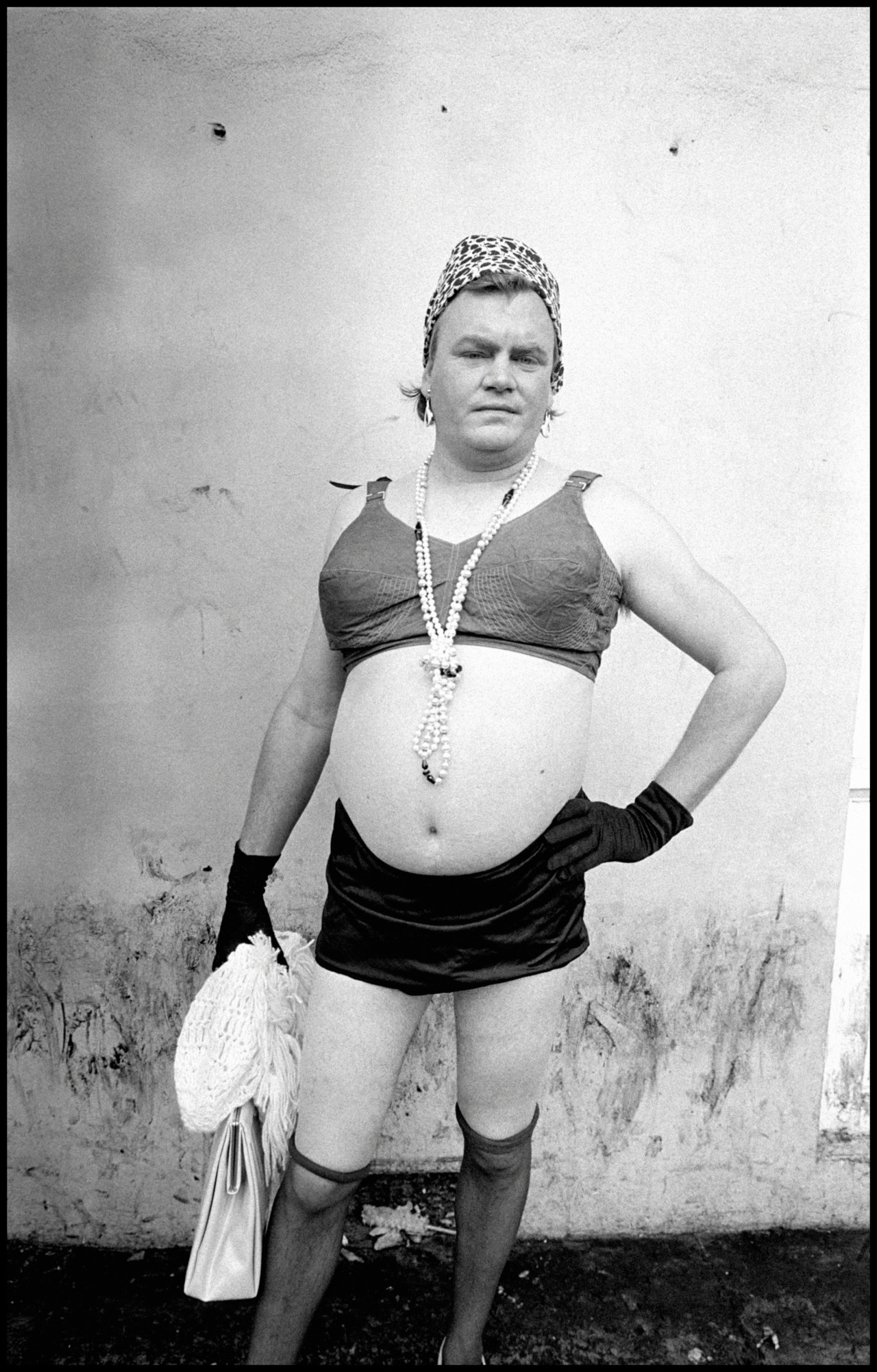