Photographs depict the delight contained in clothing and accessories that shimmer 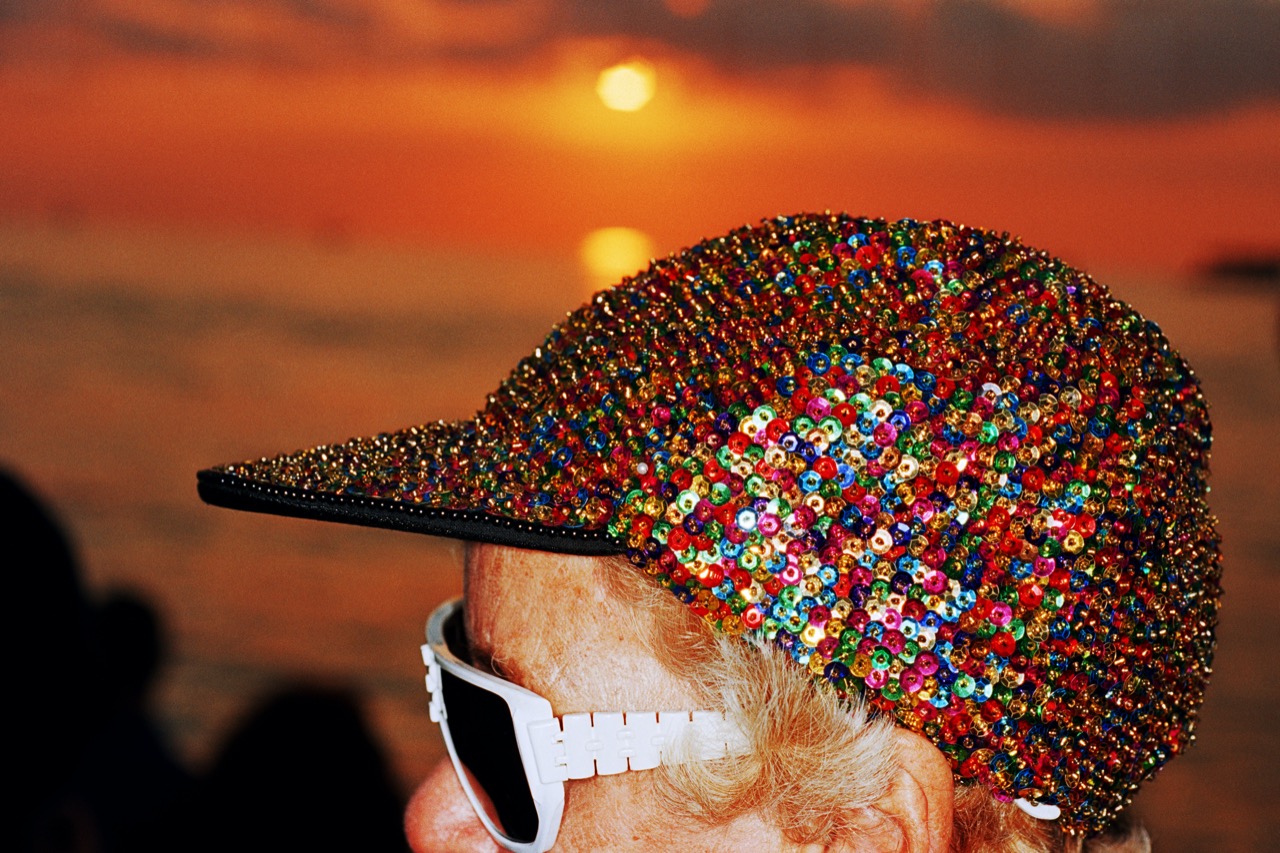 In the ninth installment of her series delving into Magnum’s collection of images, exploring its decades of documentation of vernacular style around the world, fashion writer Rosalind Jana here turns her attention to the sartorial allure of glitter. Jana has previously reflected on topics including the symbolism and allure of high heels, the evolution of denim, and the luxury and utility of gloves. You can explore the full series here.

Why do we like shiny things? I’d say the magpie – that bird famously attracted to glinting objects – might be able to provide a good answer. Unfortunately though, these iridescent-winged birds possess neither the ability to articulate themselves to us nor, apparently, any special desire to feather their nests with trinkets. In fact, several years ago scientific research revealed that, contrary to the popular narrative (which seems to have its origins in European folklore and a 19th Century opera), your average magpie is potentially made nervous by the presence of items that gleam. 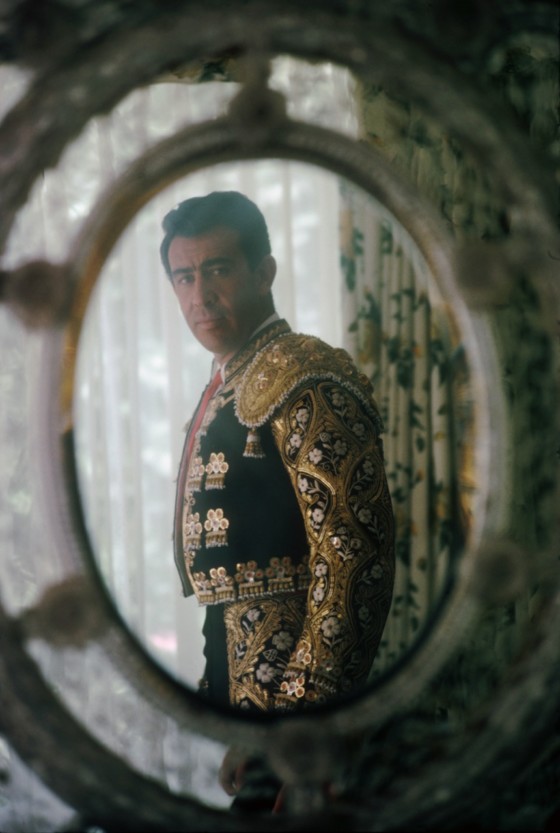 Burt Glinn Manuel Capetillo, a leading mexican bullfighter, dresses for a fight at home, as is the custom in Mexico. He was also a singer and a movie star in the 60s. Mexico. Mexico City. 1962. © Burt Glinn | Magnum Photos 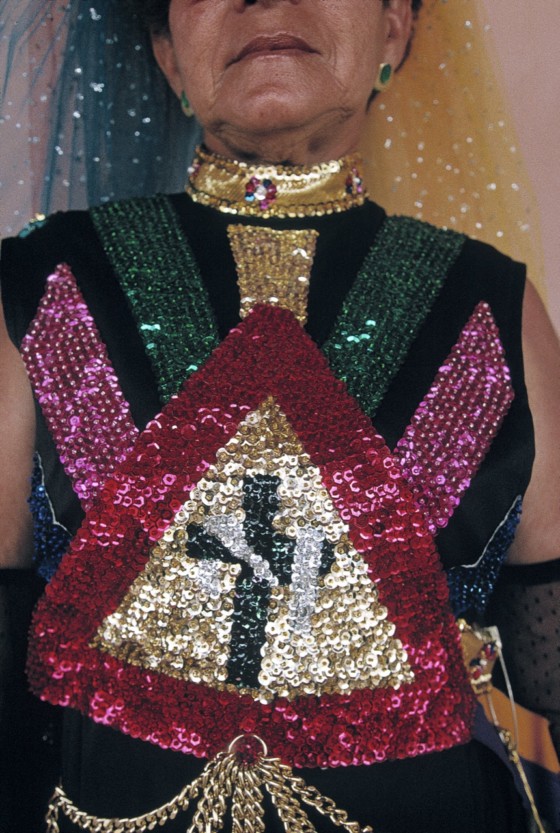 By this point the reality probably matters less than the myth. After all, when you look up the word ‘magpie’ in the dictionary it doesn’t just connote a small, noisy, potentially aggressive bird, but also a person who “like[s] collecting and keeping things, often things that have little value.” To describe someone as a magpie is to suggest they have both the soul of a hoarder and/ or the eager eye of one who delights in surface sparkle. The birds might not be out there swiping bottle tops and engagement rings as regularly as we might imagine, but their image remains indelibly associated with a hunger for glitz.

Talk of magpie thievery aside, our human love of shiny things remains rather fascinating. Science suggests we are compelled by them because, on some deep evolutionary level, the shimmer of patent shoes or metallic phone cases reminds us of water. History points to a long and varied alliance between glitter and conspicuous displays of power and wealth, especially when it comes to the wardrobe department. Precious gems and metals have always been a surefire way to signal status, while additional embellishment on an outfit is a useful method of maintaining attention. 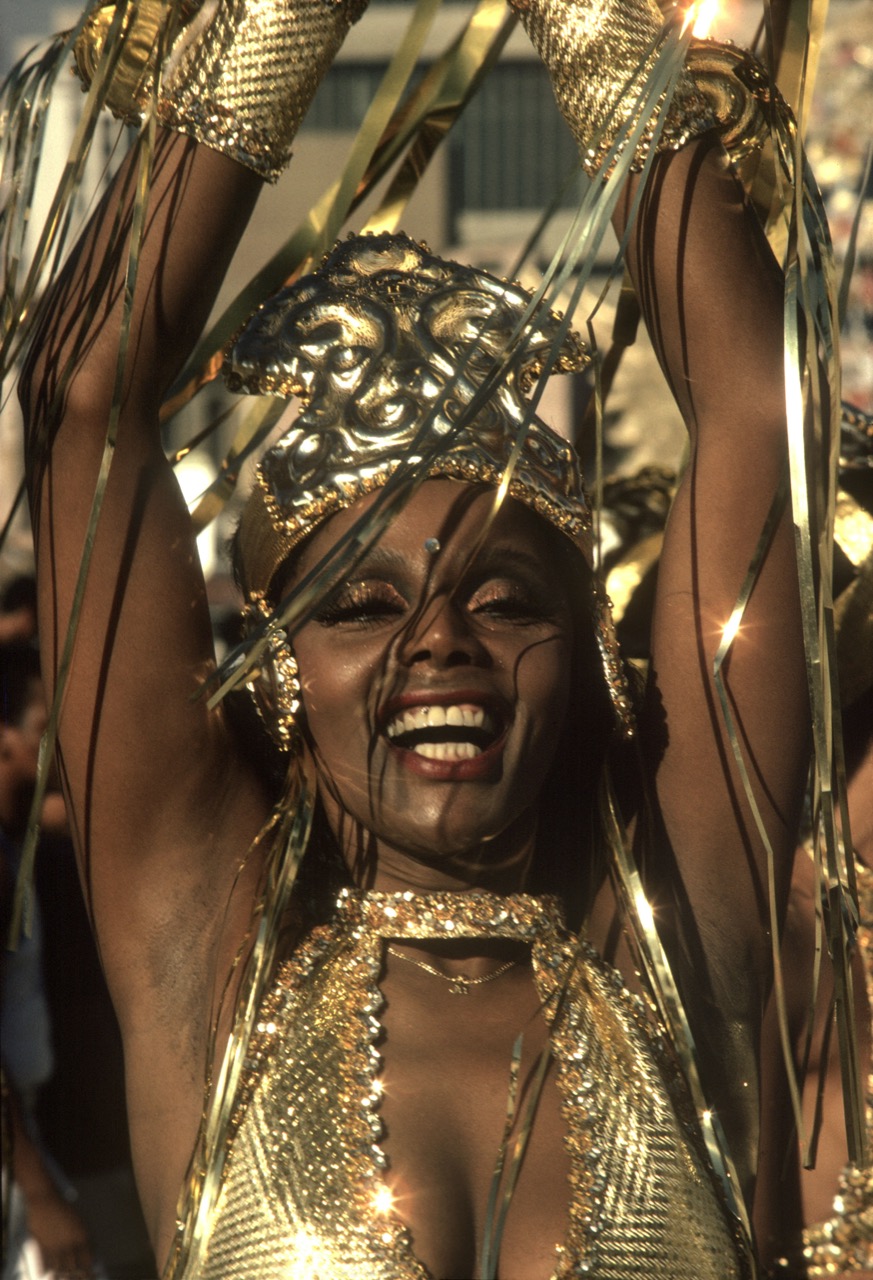 In fact, many monarchs including Queen Elizabeth I wore gowns and other garments decorated with pearls, jewels, and metallic thread, and legislated against those in lower social ranks doing the same (apparently in  the idea of an ordinary citizen walking around clad in gold cloth in 1565 was likely to induce “disorder and confusion”). In 1783 when Marie Antoinette turned away from her finery to be painted instead in a gauzy, rustic style costume, her dress, despite its scandalous simplicity, was still accessorized with a gold sash. Several centuries later when King Tutankhamun’s tomb was opened up in 1922, several of the Egyptian king’s garments were found to be decorated with gold discs. Alfred Lucas – who was part of the excavation team – described them in his notes as sequins.

Even within Magnum’s collection, lesser forms of pomp and circumstance are widely found, the archive full of mayors wearing gold-trimmed cloaks and priests performing communion in burnished vestments. Our association of metallic garb with leadership, as well as the ability to command spectators, remains strong. 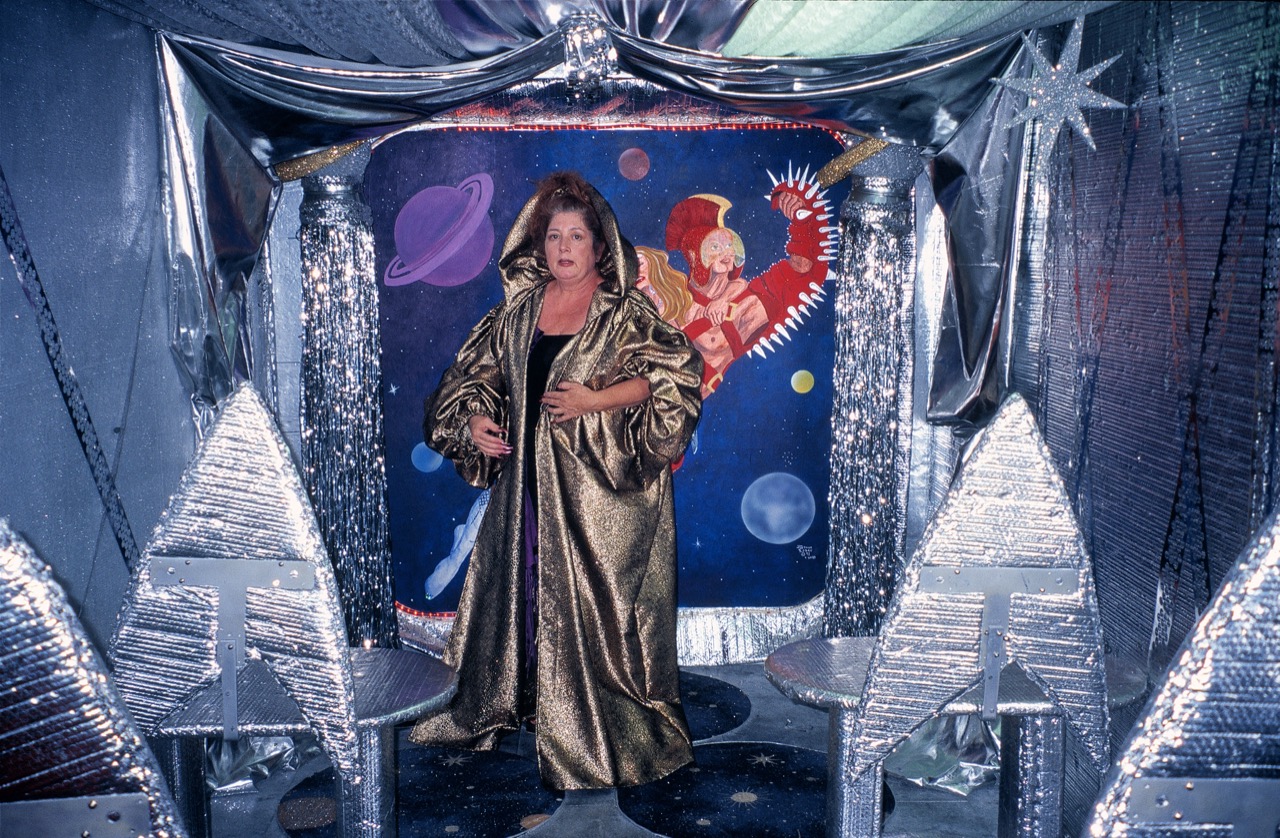 "Science suggests we are compelled by them because, on some deep evolutionary level, the shimmer of patent shoes or metallic phone cases reminds us of water." 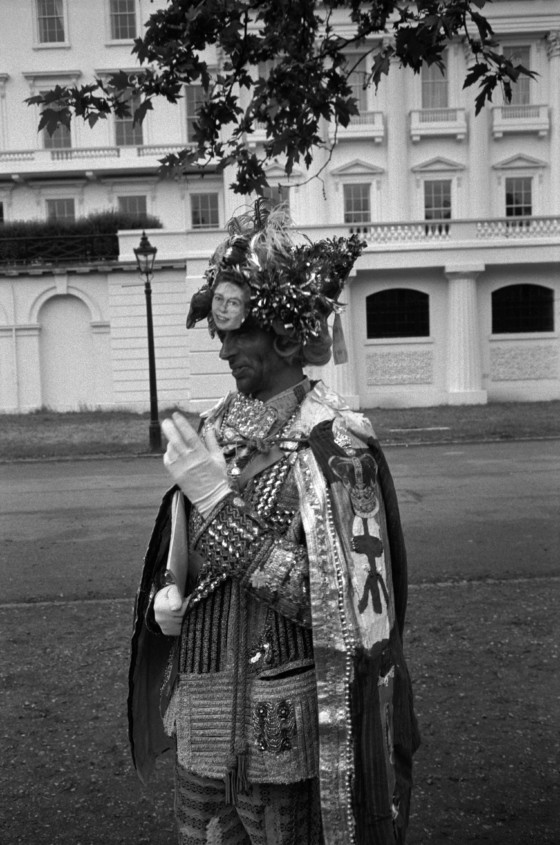 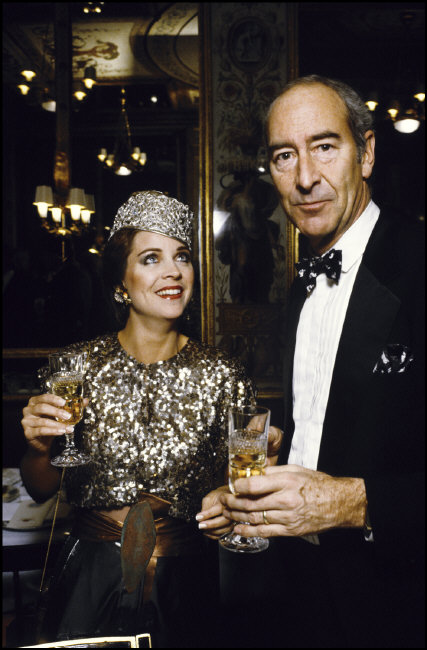 Now, of course, you don’t have to be a noble to enjoy a bit of spangle. Sequins, beads, jewels, metals, lurex, lamé, lycra, satin, silver trim, sparkly nylon, foil, brocade: in contemporary life there are an impressive number of materials available in order to construct twinkling garments, and any number of ways to wear them. In fact, these days metallic clothing possesses impressive shape-shifting qualities. No wonder. Over the previous century or so it has bestowed its memorable effects on a number of different sartorial epochs: winking on flapper dresses during the roaring twenties, cladding femme fatale stars in Hollywood’s silver screen heyday, appearing in futuristic guise during the ‘60s Space Age craze, and providing the necessary pizzazz and glamour for ‘70s disco. Cheap and cheerful or deeply luxurious, irreverently glam or ritualistically formal, tacky or refined, it’s now a type of attire comes in many hues. 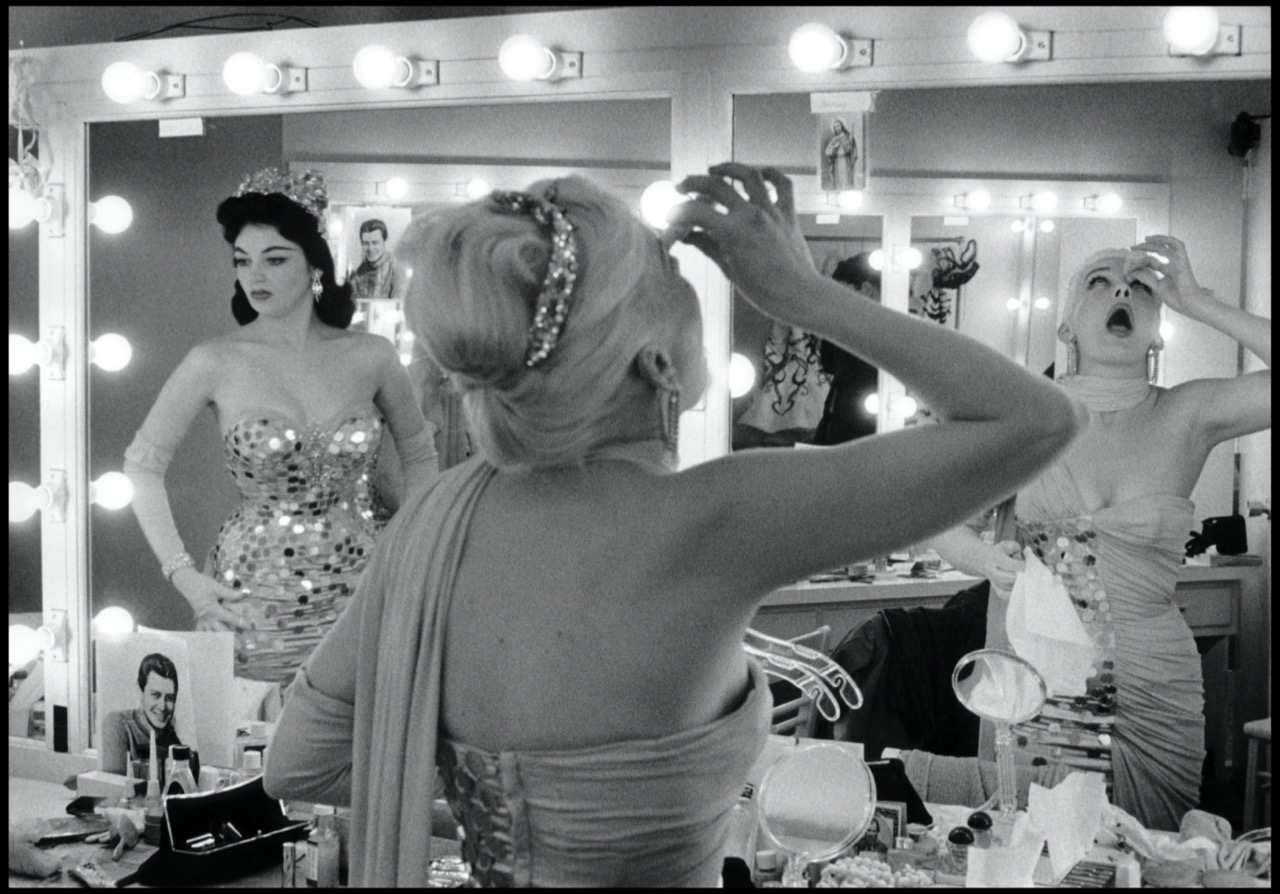 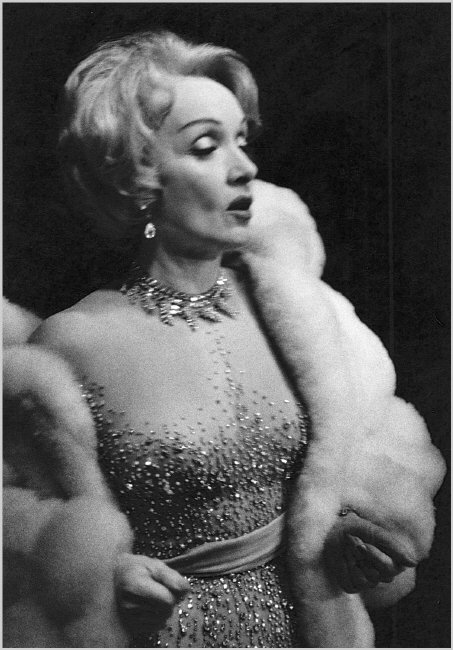 In looking at a number of these differently hued garments, something else quickly becomes apparent. Even without that wealth of historical context to guide us, one need only observe the effect of layered beads in motion or catch the shimmering sea of green, pink and bronze at a carnival in Rio de Janeiro to understand why shiny things remain so desirable. They are show-stopping. In all their bright, reflective glory, they offer both the deep pleasure of ornamentation and the seductive promise of attention. It’s impossible to ignore someone playing billiards in a sequin blazer, as per Christopher Anderson’s 1998 portrait taken in China, or pass over a guest who turns up to a dinner in something spangled with a matching hat. It’s hard to overlook a model dressed head to toe in an outfit that resembles liquid gold. 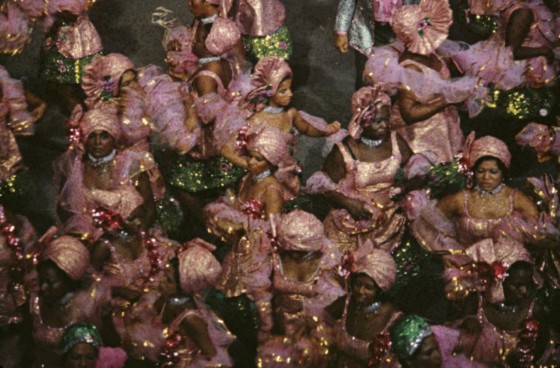 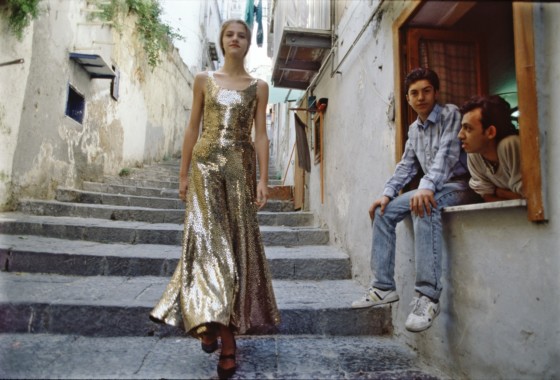 Maybe it’s the reason that so many brides have been photographed in gleaming get-ups too. Take Peter Marlow’s 1990 photo in the USSR of a young couple, the woman held aloft in her veil and billowing dress. The image is entirely dominated by the silver swing of her skirts and ballooning sleeves – the effect both exuberant and slightly ice queen-ish against the snowy pavements. Similarly, in Bruno Barbey’s 1984 portrait of a bride in Morocco, her gold braided robes are almost luminous: hovering above the rest of her family in a dark room, the material bouncing back the soft light of the lamp above her. 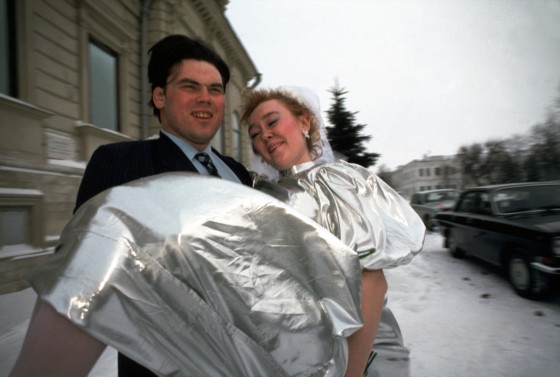 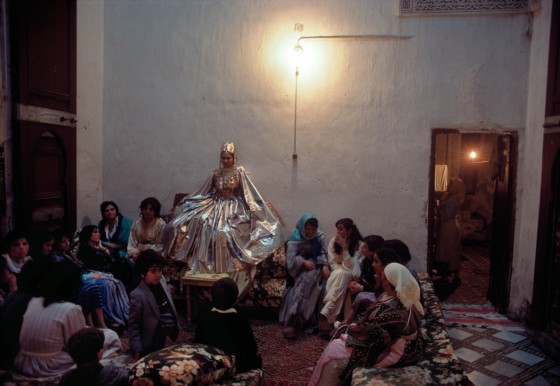 Really, when it comes to the wearing of metallics and glitter, it’s all about the light. As Herbert Lieberman, the inventor of acetate sequins (a handy replacement for gel sequins, which looked great but had an unfortunate habit of melting) said of his creation: “The light would penetrate through the color, hit the silver, and reflect back… Like you painted a mirror with nail polish.” The penetration and reflection of light is what makes shininess so oddly satisfying to both wear and observe. There aren’t many other forms of garment that turn you into a moving disco ball or mirror: your clothes in constant, winking correspondence with your surroundings, every step a new ricochet of light. 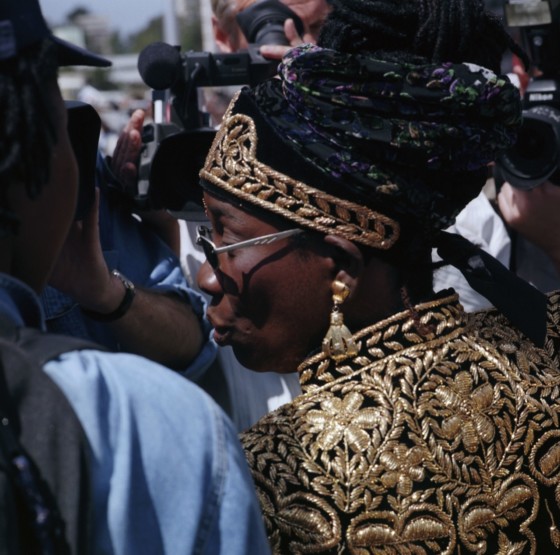 This relationship with light is also arguably what makes metallics such a popular option among performers. The Magnum archives possess a particularly large number of images featuring dancers, strippers, showgirls, clowns, and drag queens decked out in sequins and beads. These figures dazzle on stage, or find themselves caught in changing room mirrors as they check make-up or prepare themselves for the evening ahead. Feathers and sparkles abound, especially in the photos of the dancers Folies Bergère captured by several Magnum photographers including Burt Glinn, Guy Le Querrec and Ferdinando Scianna.

Elsewhere, Scianna trains his lens to an altogether more complex figure – the clown. A series of portraits capture the strange nobility and craggy expressions of a number of gaudily dressed entertainers. These include the famous Nino Fabri who strolls across a grey Paris street in his orange stockings, rakish hat, and silver and blue sequins as though it were as normal a get up as a suit or overcoat. 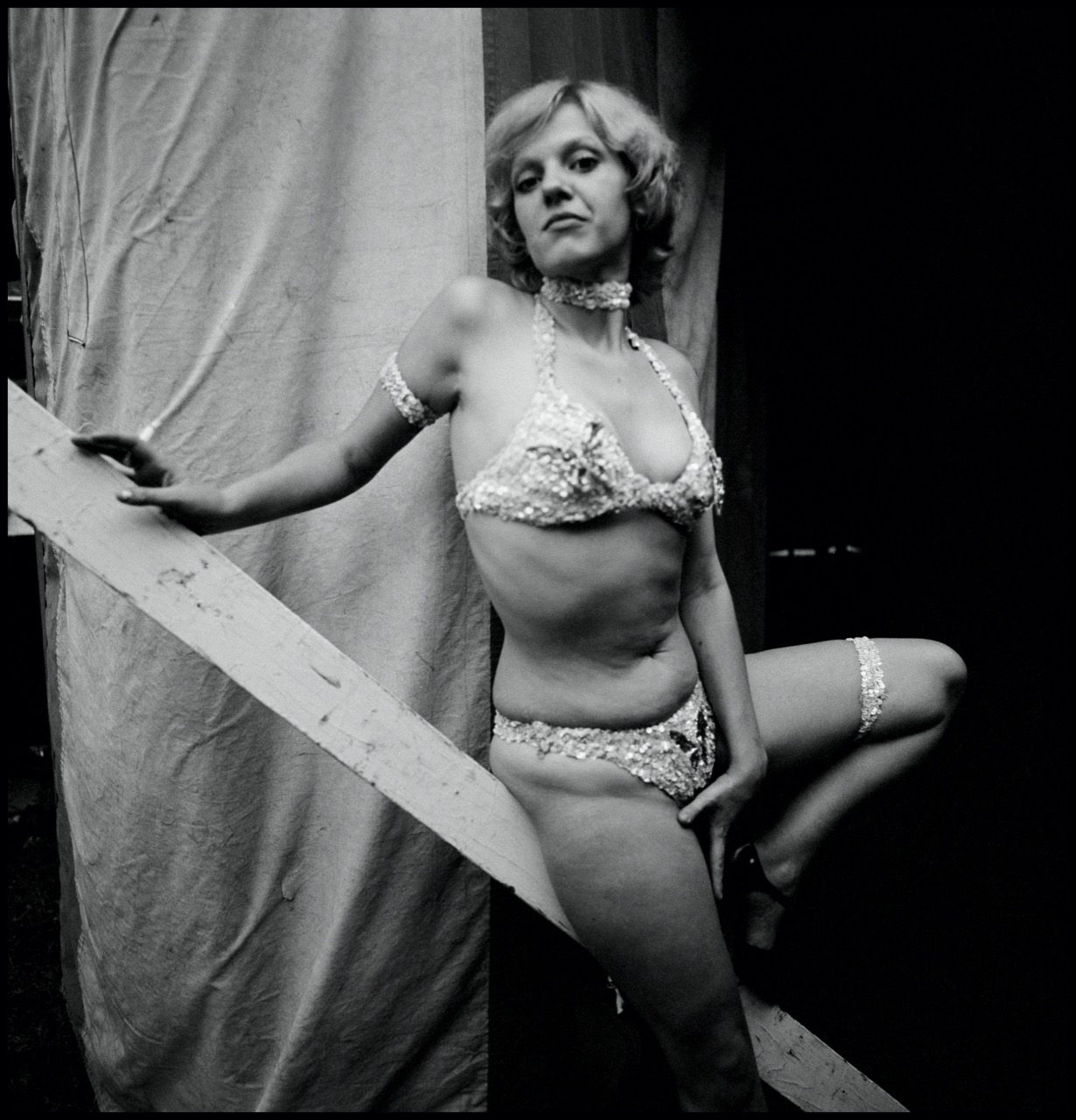 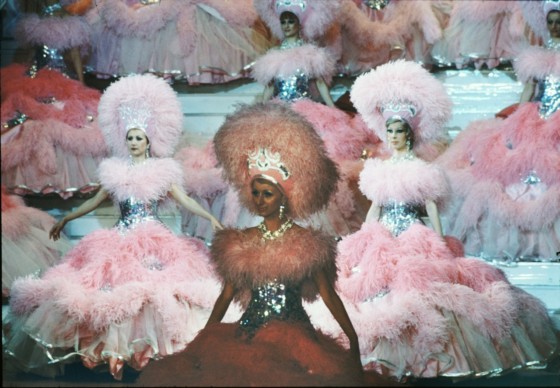 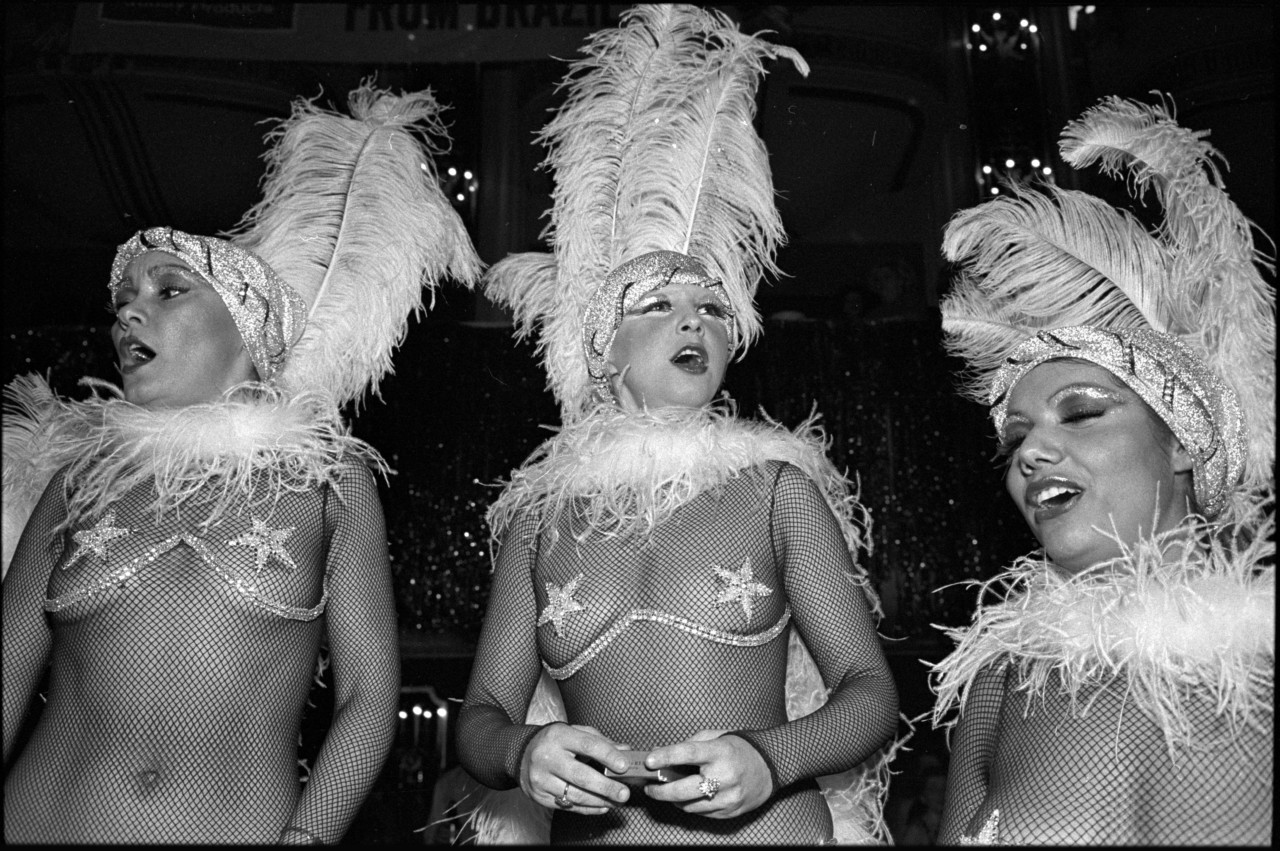 Performers also wear things that glitter because they suggest a certain kind of exuberant festivity. They invite us to be transported through visual fantasy, or at the very least be stunned by the spectacle. Away from the stage, many of us adopt a similar, subtler kind of effect. After all, metallics and glitz are often the domain of celebration: whether they come in the form of Christmas hats emulating tinsel or summer sequins worn at muddy music festivals. For us, too, they lend us attention-grabbing powers. To wear something that shimmers can be a kitsch decision, but also a powerful one. Perhaps right now it feels a little defiant too: a gently merry form of revelry, a shiny token to ward off the dark. 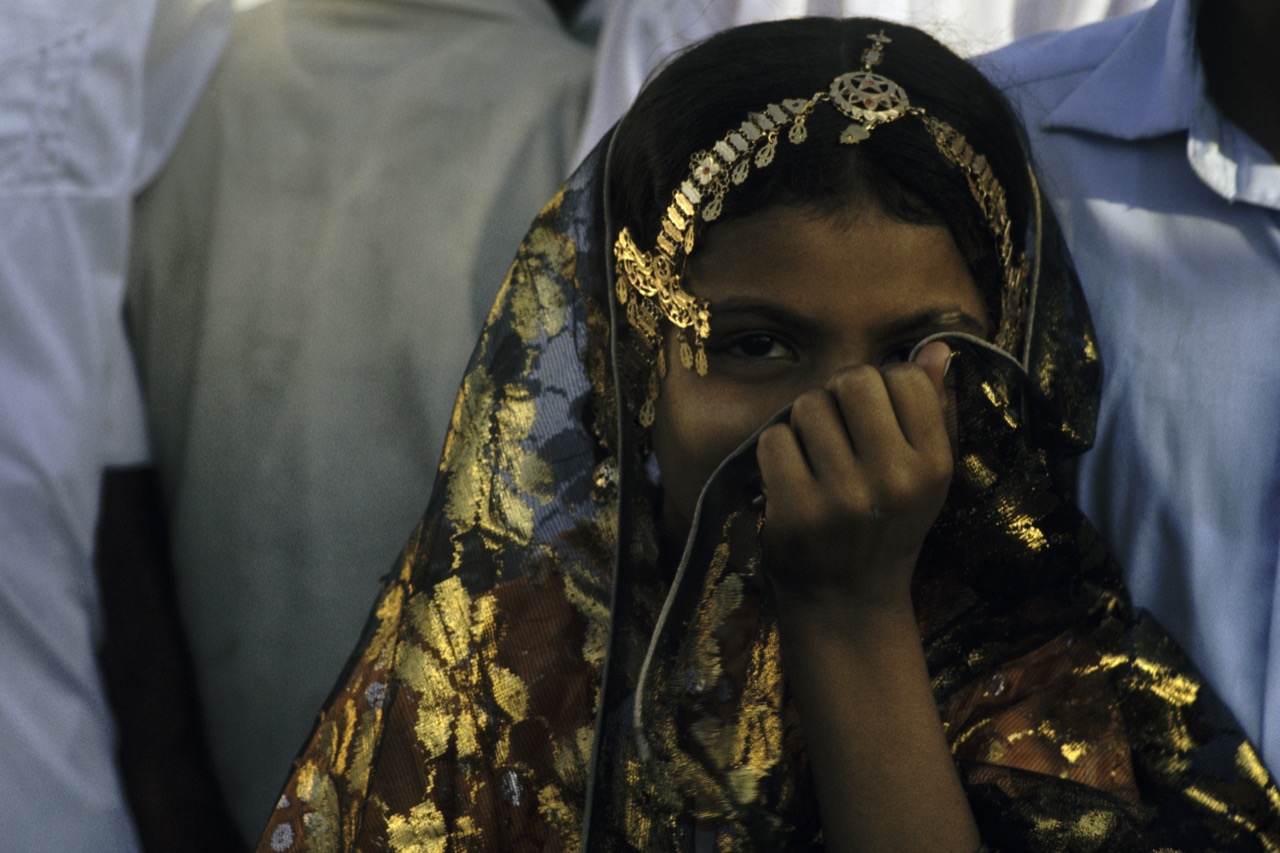