Utilitarian, glamorous, enigmatic, and more — we explore depictions of a versatile garment 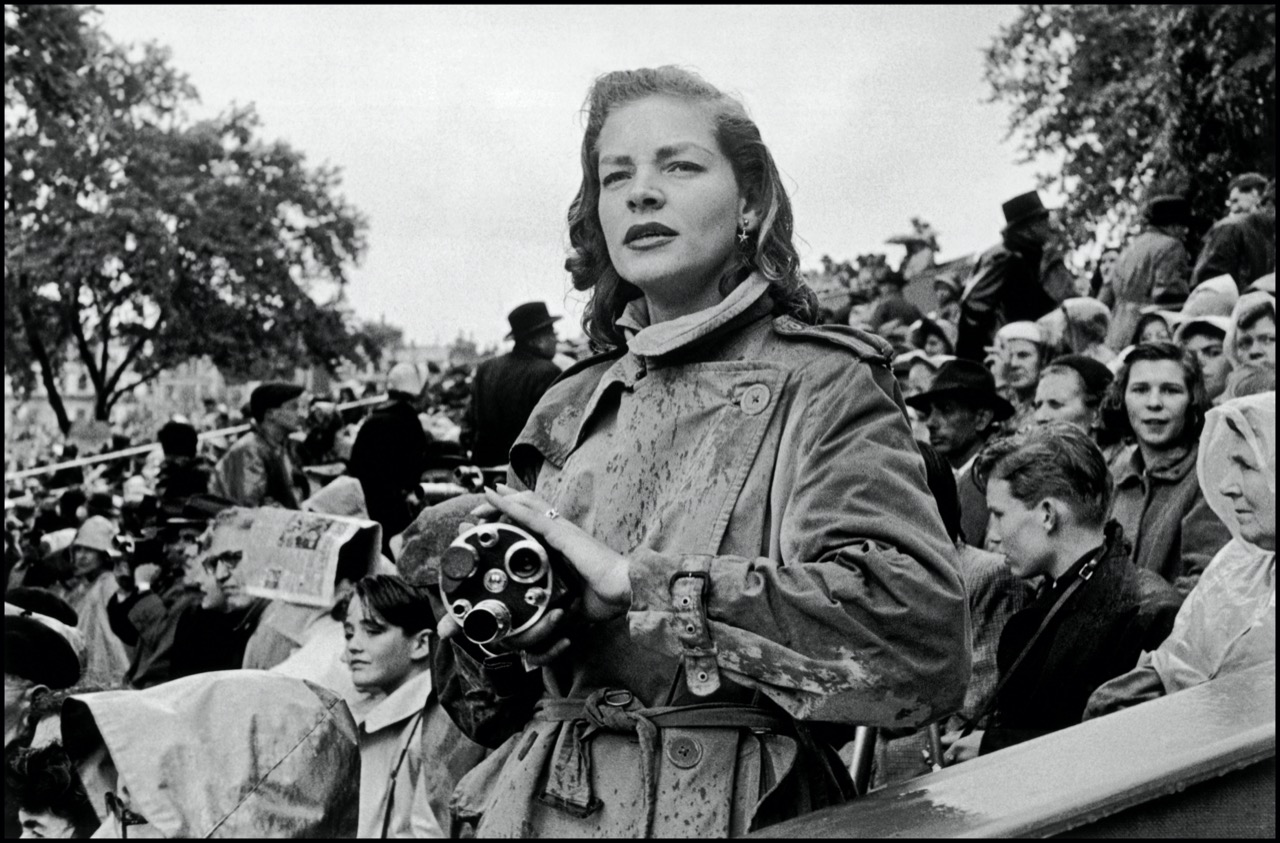 In the eighth installment of her series delving into  Magnum’s catalogues, exploring its decades of documentation of vernacular style around the world, fashion writer Rosalind Jana, as winter settles upon us, here turns her attention to the trench coat. Jana has previously reflected on the symbolism and allure of high heels, the evolution of denim, and the luxury and utility of gloves. You can explore the full series here.

A trench coat is a garment best worn on a gloomy day. Ideally with the collar turned up, or a gust of wind lifting the hem. If it’s raining, all the better. In Robert Capa’s photo of Lauren Bacall, at the coronation of Queen Elizabeth II the actress, too, looks regal: protected from the worst of the elements by her practical coat, the damp patches across her shoulders and arms somehow adding to her look rather than diminishing it. The trench coat assumes its rightful use, too, in Inge Morath’s photo of model Nancy Berg hastening away down New York’s 5th Avenue, Berg’s silhouette partially reflected in the rain-slicked tarmac. 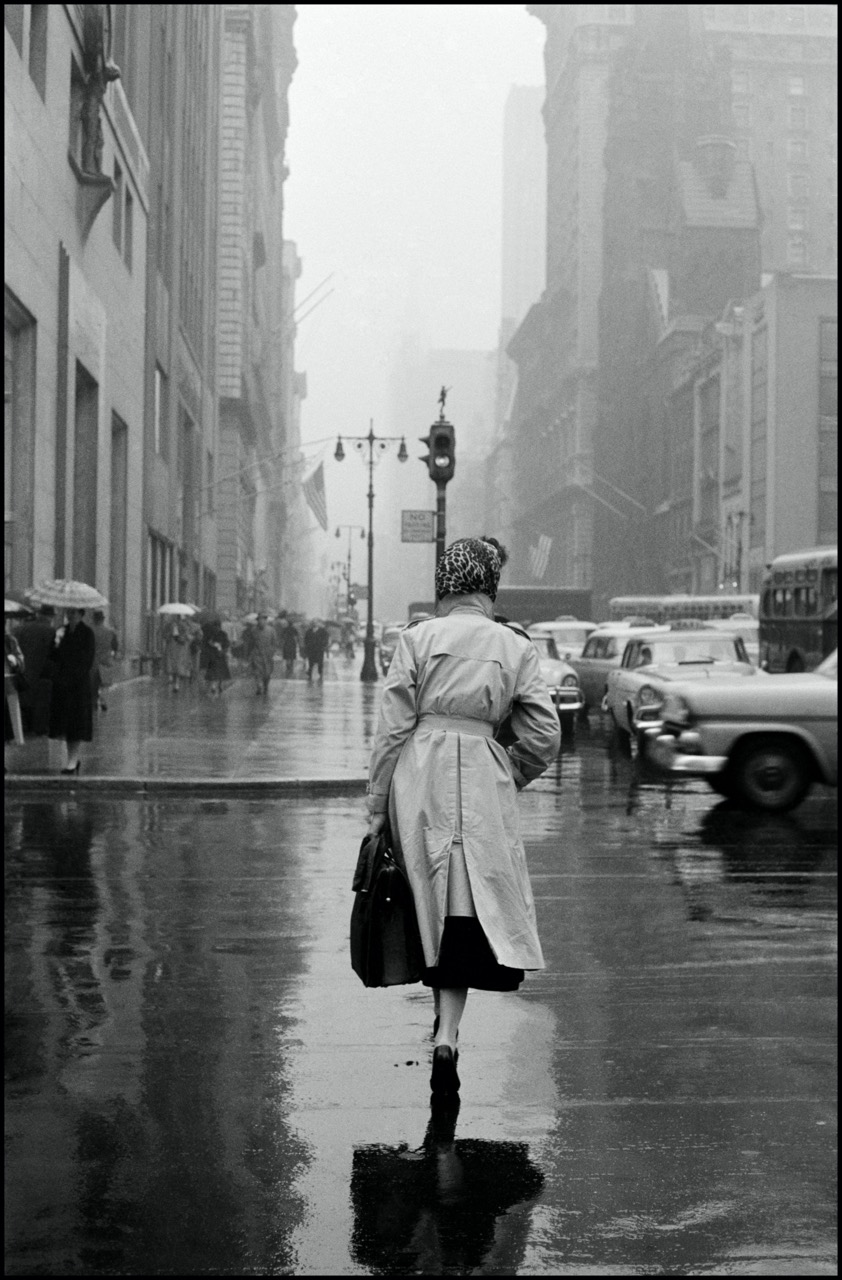 "Even when the skies haven’t opened, the trench coat often finds itself accompanied by hunched shoulders and hands dug deep into pockets" 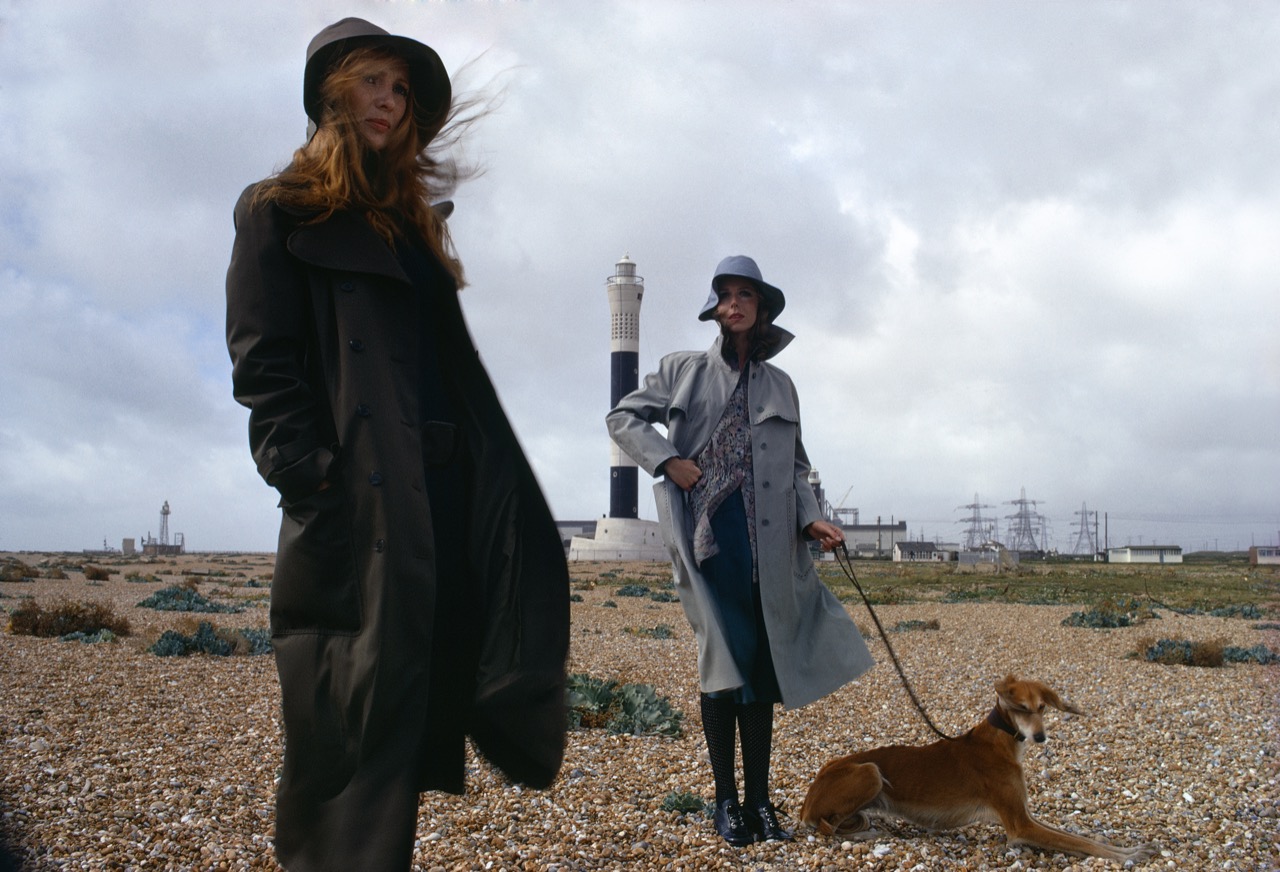 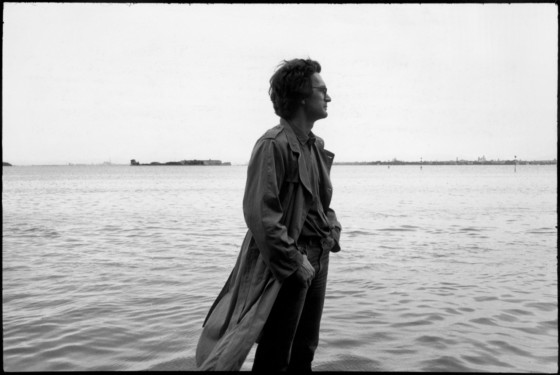 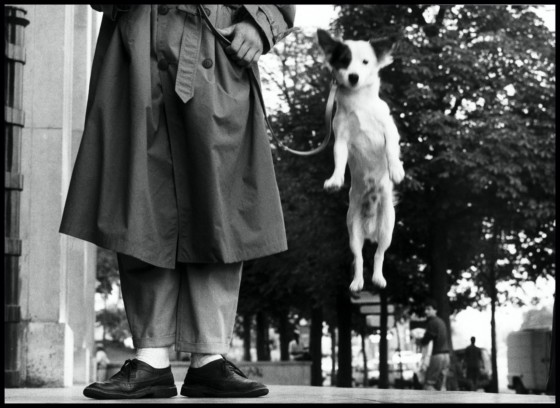 Even when the skies haven’t opened, the trench coat often finds itself accompanied by hunched shoulders and hands dug deep into pockets. David Hurn’s photo of two fashion models on a desolate stretch of shingle, power stations receding behind them, is all the more evocative for the motion of windswept hair and robust fabric. Raymond Depardon’s portrait of Wim Wenders achieves similar atmosphere as the German film-maker stares out over Venice’s moody waters. Elliot Erwitt’s image, too, of a woman rushing past with head bent forwards suggests a bitingly cold day. It’s a posture echoed in reverse, both in the tilt of the subject’s chin and the camera’s focus on a single, lined hand clutching a bag, in Peter Van Agtmael’s portrait of a solitary woman in Los Angeles. In this photo the weather is harder to read, but the image’s emotional temperature remains somewhat desolate. 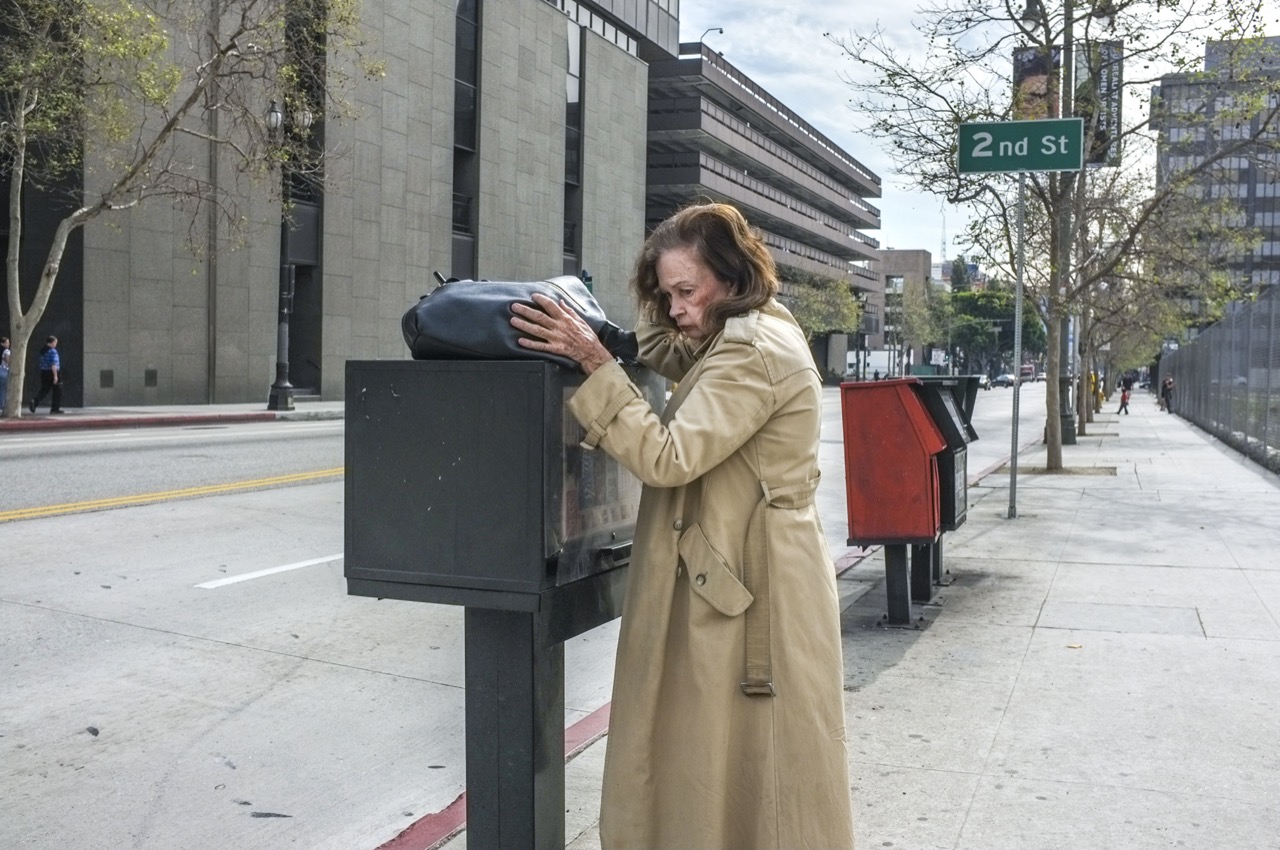 The trench coat’s alliance with this more onerous side of the elements is no surprise, given that it was designed for precisely these conditions. Its origins are found back in the 1820s, when Charles Macintosh and Thomas Hancock invented a handy garment known as “the mack”: a waterproof coat made from rubberized cotton, intended for outdoor pursuits ranging from hunting to military activity. Several decades on, two more men began experimenting with fabrics that would be less, well, sweaty. One of these was John Emery, who devised a lighter water-repellant material in 1853 that he made into raincoats and sold under his label Aquascutum (“aqua” means water in Latin, while “scutum” translates to shield.) The other was a young draper called Thomas Burberry. After beginning his business in the 1850s, in 1879 Burberry invented gabardine: a form of twill where each individual fibre was weatherproofed, rather than the whole garment. Like their predecessors, both men’s efforts were adopted by the military. 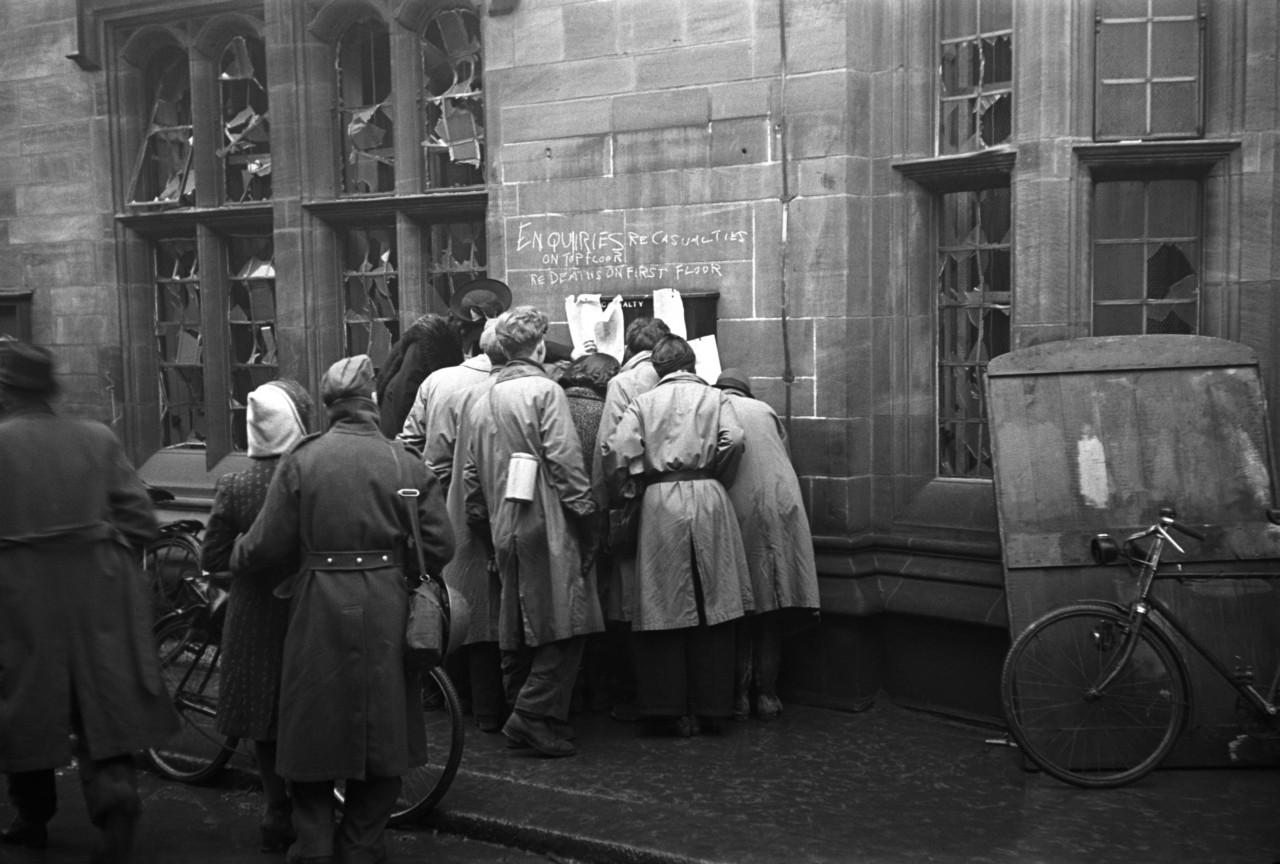 George Rodger List of the dead and wounded are posted on the walls of City Hall. Coventry. England. 1940 © George Rodger | Magnum Photos

"However, it was only during World War I that the trench coat as we now know it came fully into being. It was a coat designed for grim surroundings: utilitarian, waterproof, lightweight but warm, easy to move around in..." 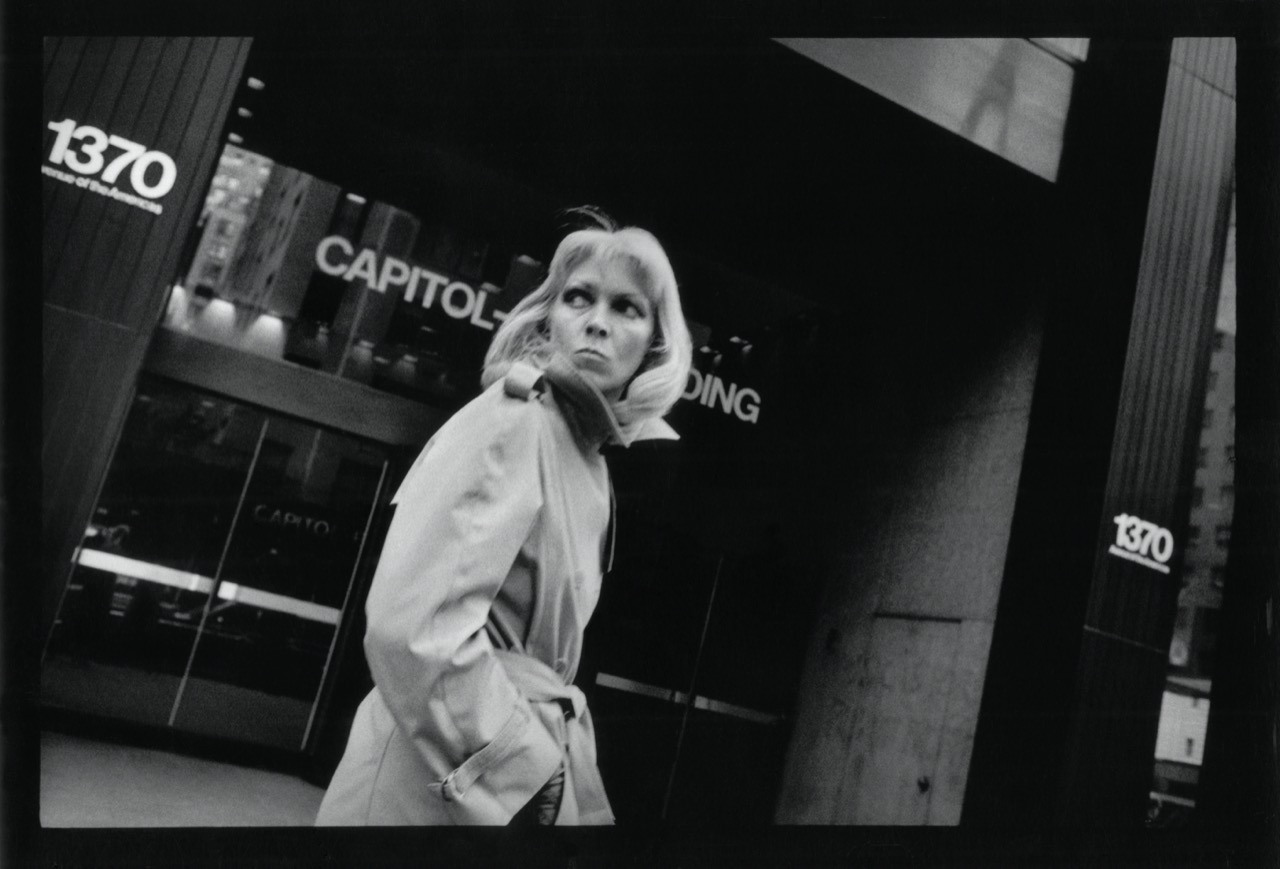 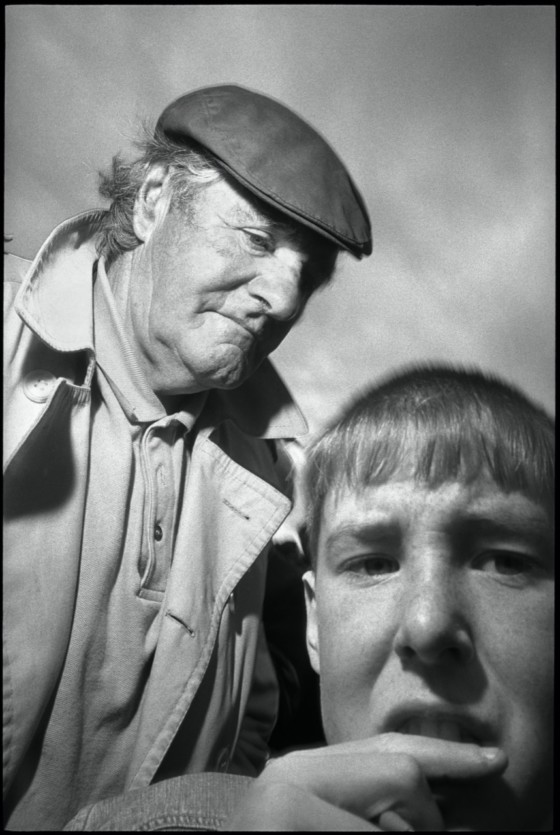 However, it was only during World War I that the trench coat as we now know it came fully into being. It was a coat designed for grim surroundings: utilitarian, waterproof, lightweight but warm, easy to move around in, possessing details including adjustable cuffs, capacious pockets, storm flaps on the shoulder for ventilation and a small caped section at the back to help rain slide off. Like its contemporary iteration, it was double-breasted and belted at the waist. Unlike its contemporary iteration, it was also a strict marker of rank, worn only by officers. It was after the war that its presence spread into civilian life, subsequently popularized (as so many garments were) by a number of notable appearances in Hollywood. 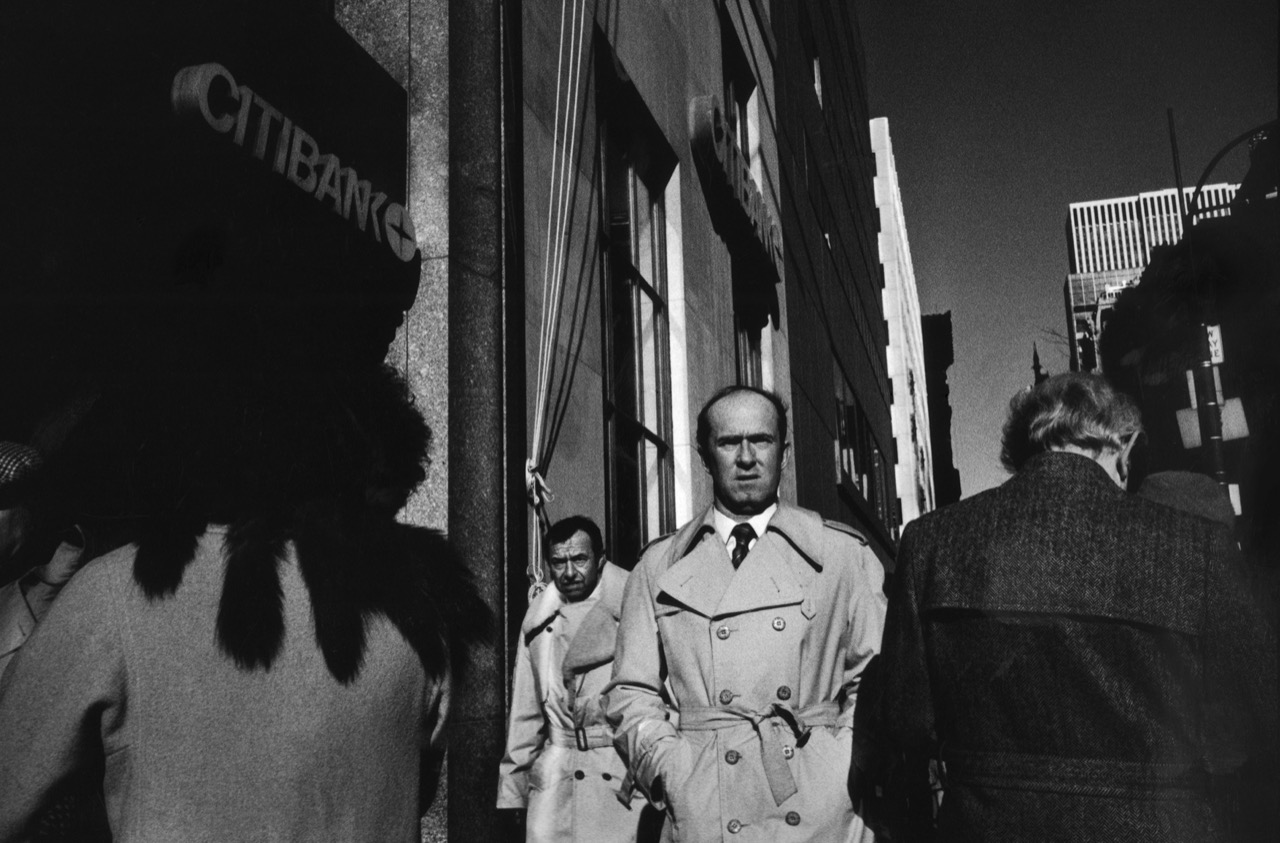 "These [Hollywood] reference points have a funny consequence though. Many of the photos found in Magnum’s back catalogue featuring trench coats have a strange, almost film-still-like feel to them" 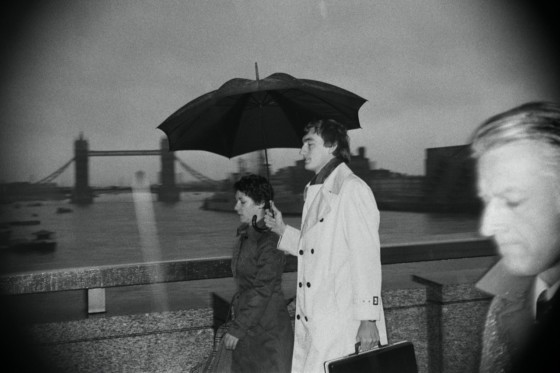 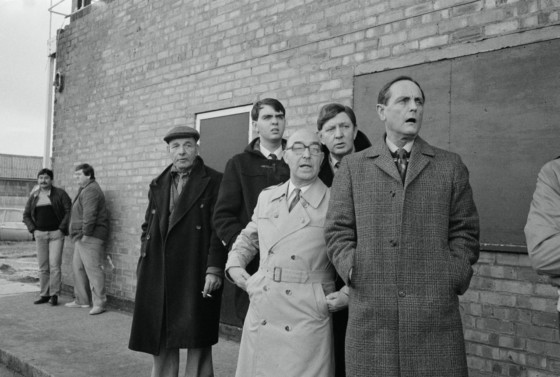 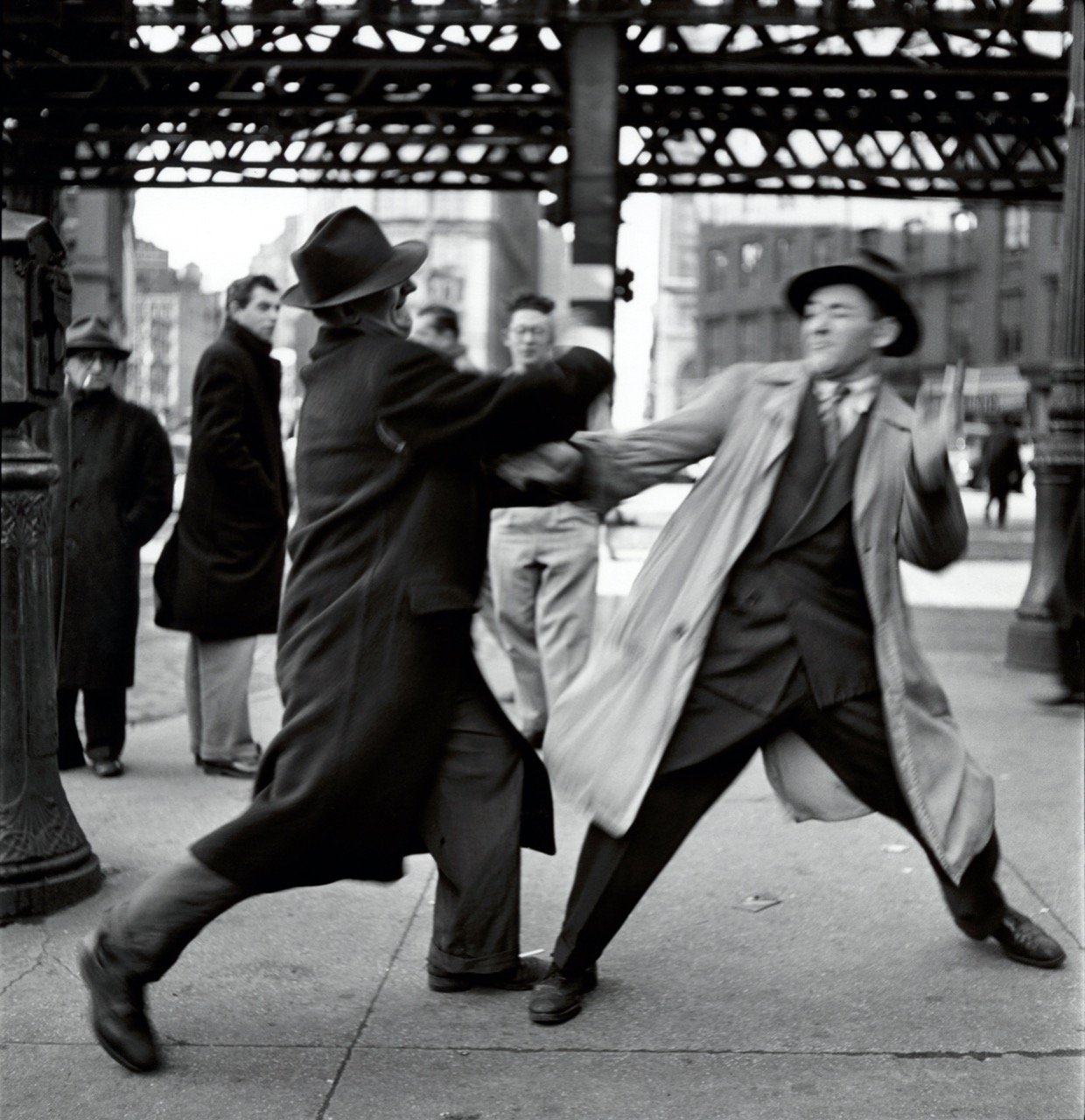 In fact, when we think of the trench coat now, our associations tend to be movies rather than interminable, muddy warfare. The trench coat’s silhouette is an evocative one, calling to mind all those stalwart characters of mid-century Hollywood: craggy-faced detectives, shifty spies, hard-nosed businessmen, and leading ladies looking achingly chic in beige. These reference points have a funny consequence though. Many of the photos found in Magnum’s back catalogue featuring trench coats have a strange, almost film-still-like feel to them; all grain and flash and blurred focus, featuring dim bars and cigarettes smoked with aloof expressions. But perhaps they only feel that way because the garment itself is so inextricable from its onscreen presence. 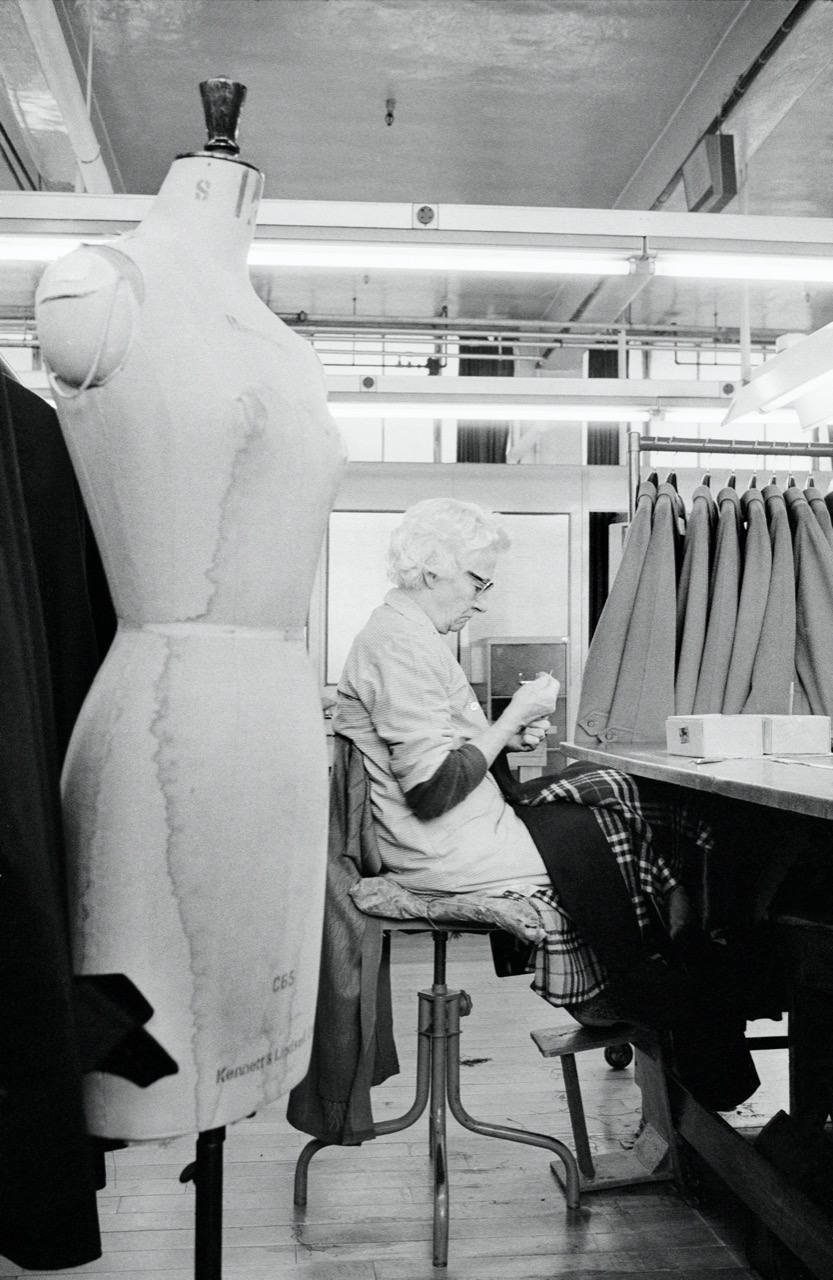 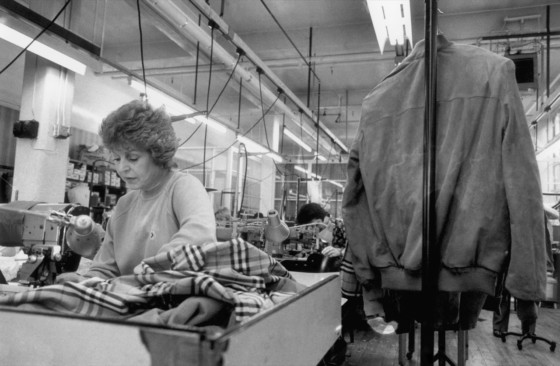 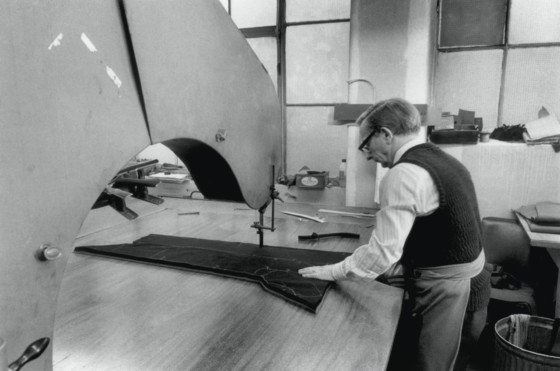 The trench coat’s history pervades the Magnum catalogue in other ways too. Often when we think of a garment we focus on how it’s worn. We consider its contexts, uses and potential appearances, dwelling on what it says of the wearer and, hopefully, how it makes them feel. Here though we have evidence of the crucial stage preceding all that. In a series of photos by Peter Marlow taken in Burberry’s shop and factory, we are instead invited to witness the trench coat’s manufacture. These photos are replete with all the crucial tools of the garment trade: sewing machines, pattern cutters, dummies, vast rows of coat hangers holding plastic wrapped items. In many of the photos the brand’s now iconic check is visible. Here we see the journey from piles of fabric to finished product, the coat ready to be tried on in the shop with security tags intact. These photos possess their own sort of intimacy, revealing this garment not just as a status symbol, cinematic silhouette, or pristine purchase awaiting its first wearer, but something that has already passed through multiple hands in being assembled. 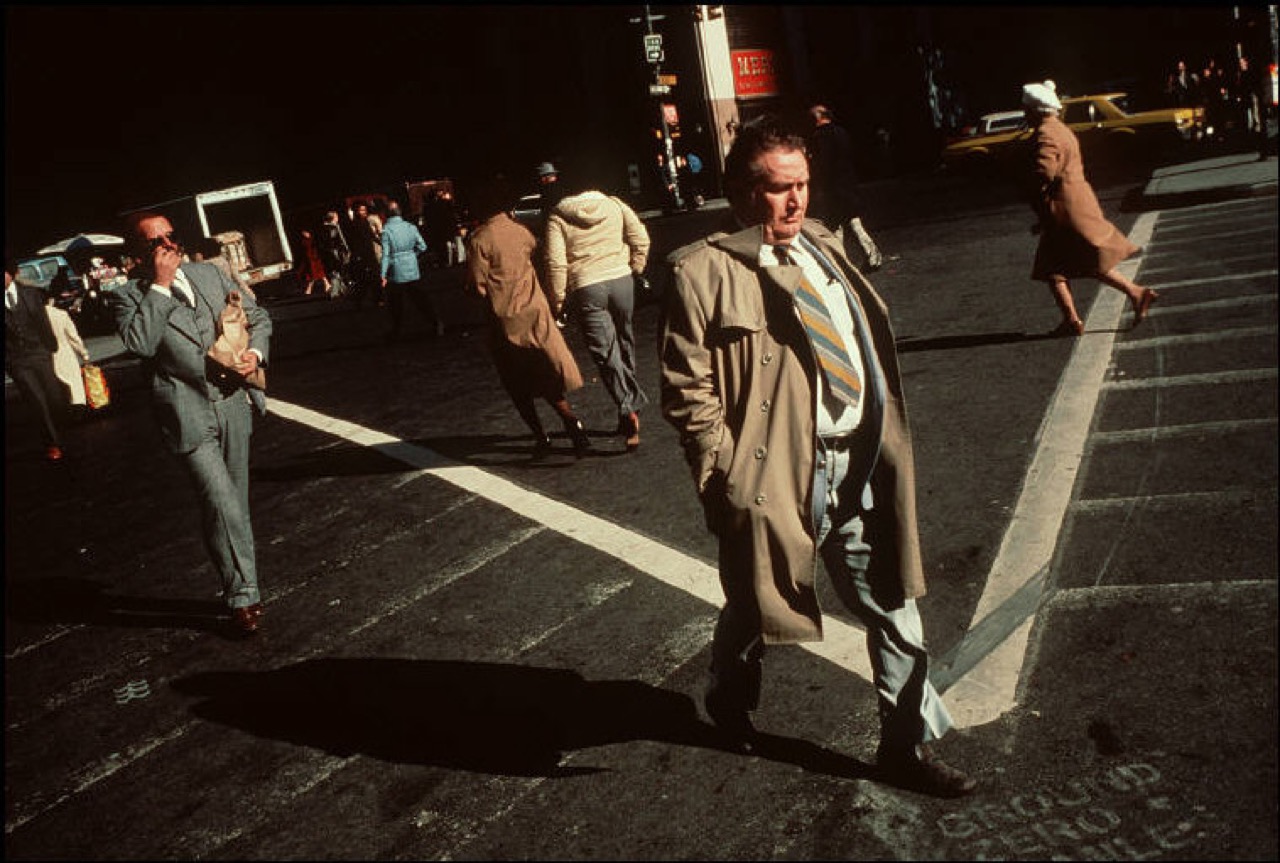 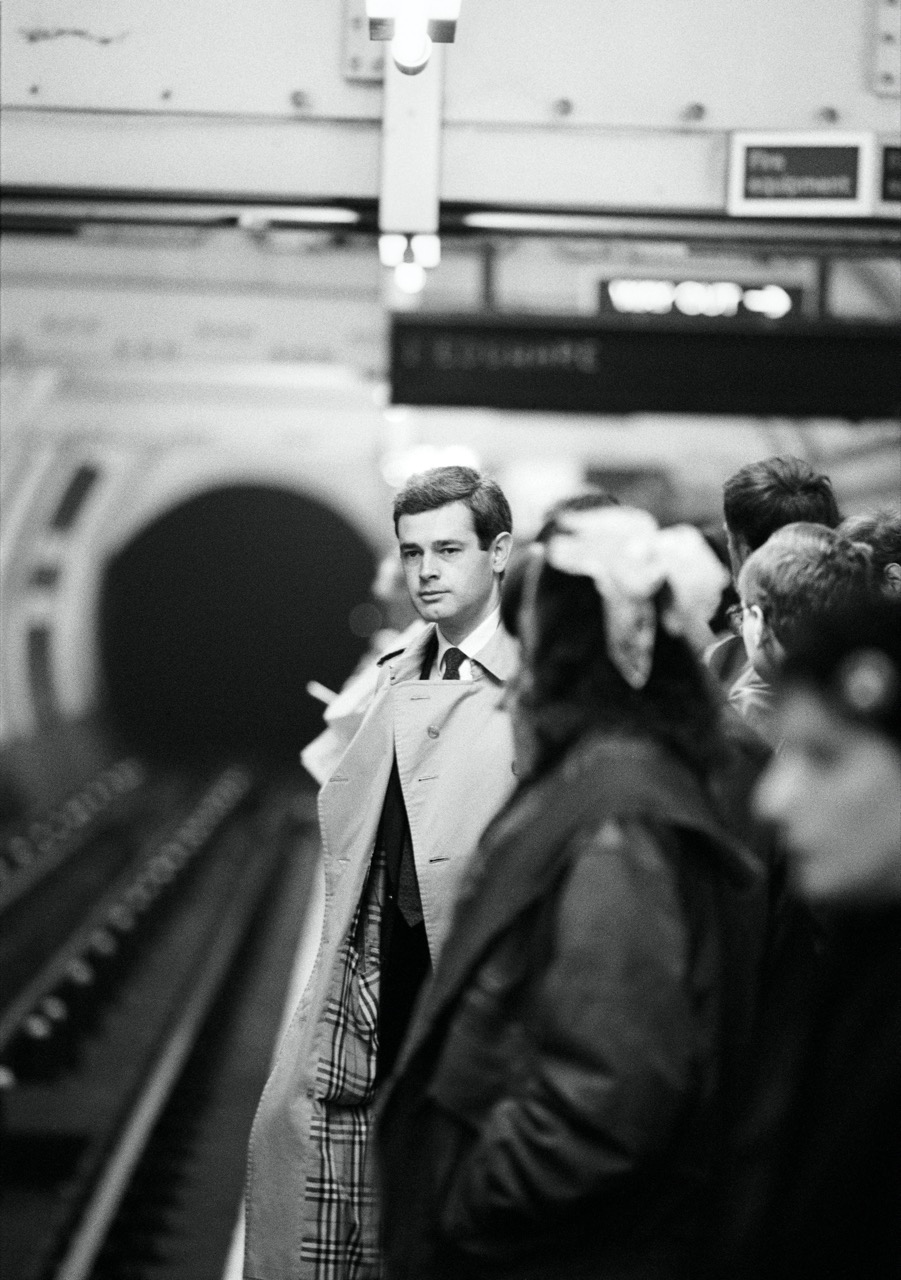 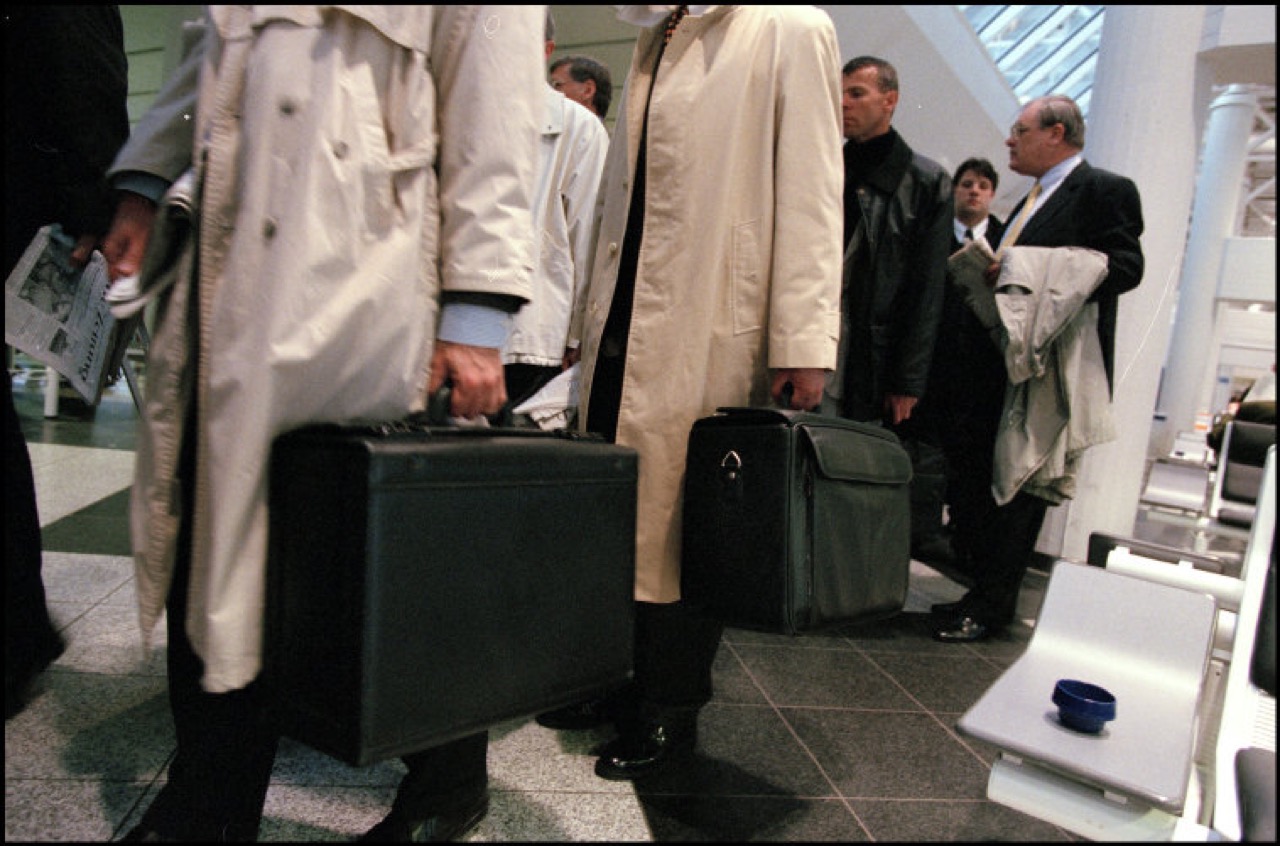 Although Aquascutum has recently been put into administration after a near decade beleaguered by financial difficulties, Burberry continues to thrive: now a much coveted high fashion label. Like many heritage labels that began by selling a particular product, Burberry has kept its origins at the heart of its branding. Former creative director (and subsequently CEO) Christopher Bailey made the trench coat the centerpiece when he took the helm in the mid 2000s, remodeling it for a more contemporary audience. Rendered in every fabric from vinyl to satin, and presented in a spectrum of shades going from classic beige and khaki through to pastel pink, bright blue, wine-dark plum, yolky yellow, rich green and plenty more besides, he expanded the many possible guises of the trench coat whilst retaining its essential character. He also rarely passed up the opportunity to invoke the spirit of a rainy British afternoon, whether the mood was one of sloshing around London streets or striding across a Yorkshire moor. 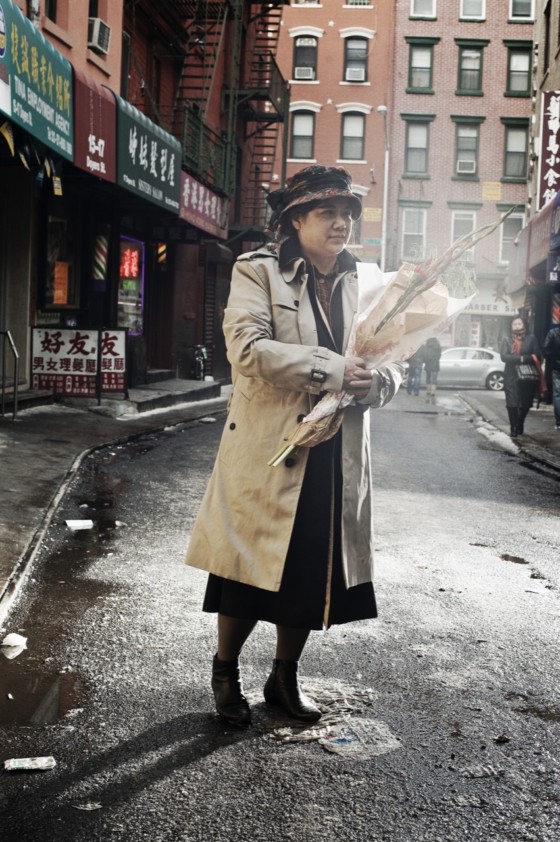 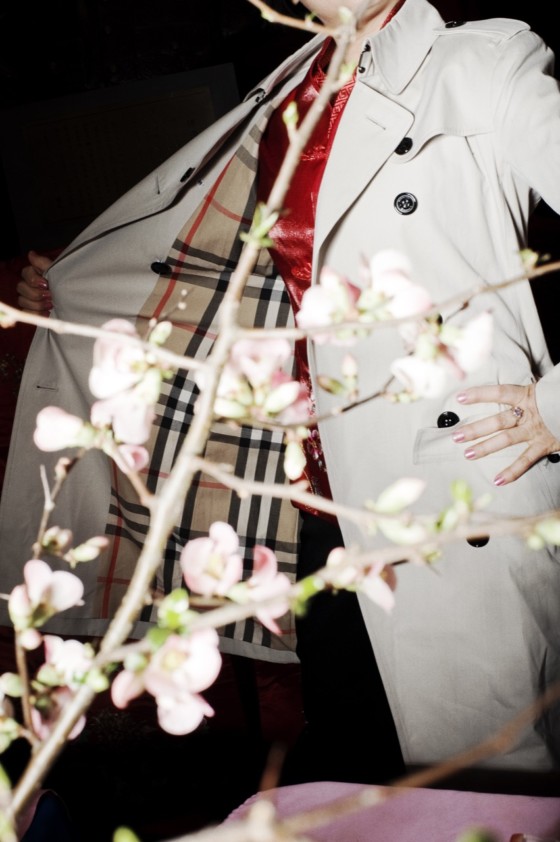 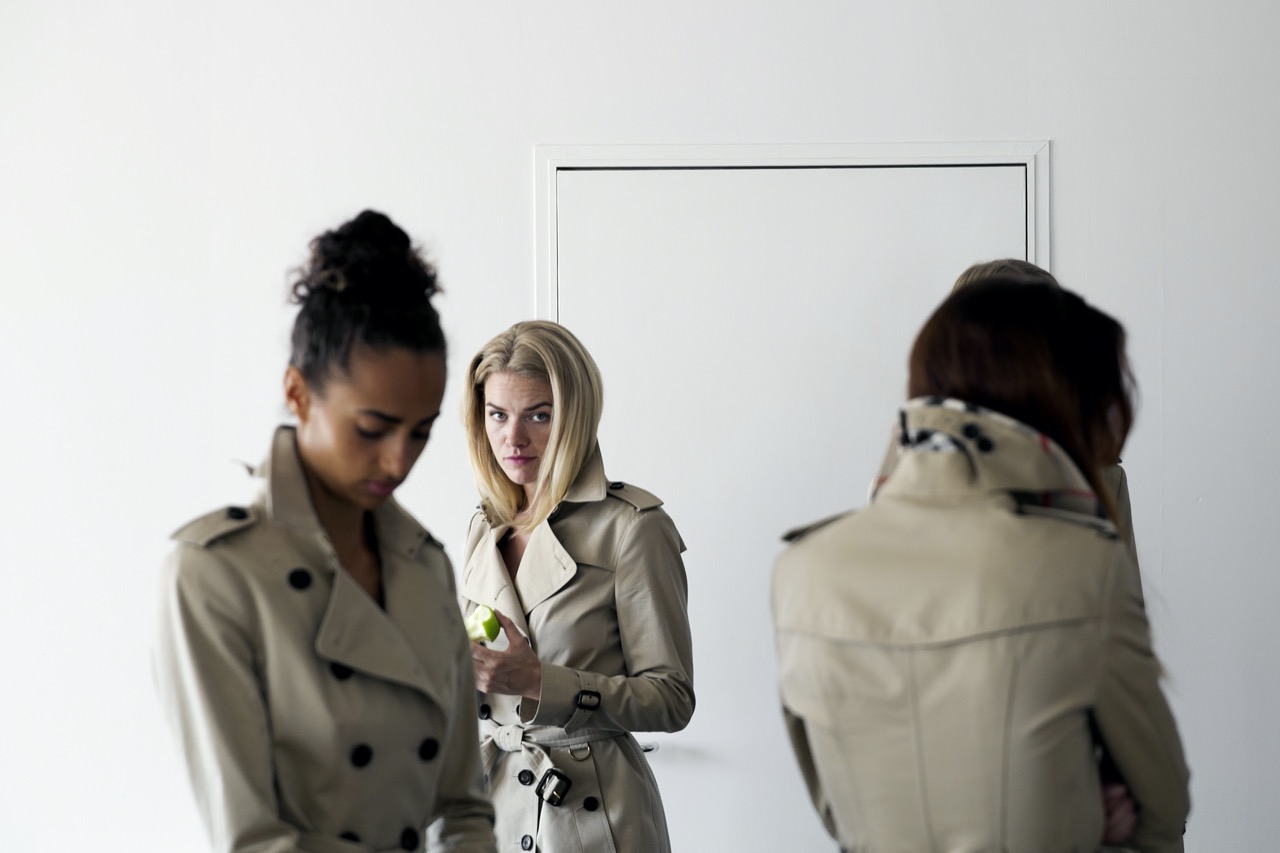 Burberry also collaborated with Magnum in 2010, commissioning a series of photographers including Jim Goldberg, Christopher Anderson, and Erwitt to document to the trench in situ during Chinese New Year in the USA. The results are wonderfully lively, each photographer applying their own eye to this widely worn garment. Other photographers, including Alex Majoli and Martin Parr, have gone on to document the trench coat’s continued evolution under current creative director Riccardo Tisci.

High fashion reinvention aside, there is something reassuring in the stoicism of a trench coat. It is a no-nonsense sort of garment: elegantly enfolding commuters (it sits easily over a suit), cladding ingénues and sturdy old women alike, as fitting on a photographer as a showy socialite or a football spectator attempting to ward off the chill. In its lightweight warmth and versatility it bridges season, situation, and gender. It offers, too, beautiful moments like the one captured by Richard Kalvar in 1991 as two silver haired men in trench coats pause on a Paris street: one assisting the other with the buckle on his sleeve, the pair united by their near identical outerwear, keeping them protected come rain or shine. 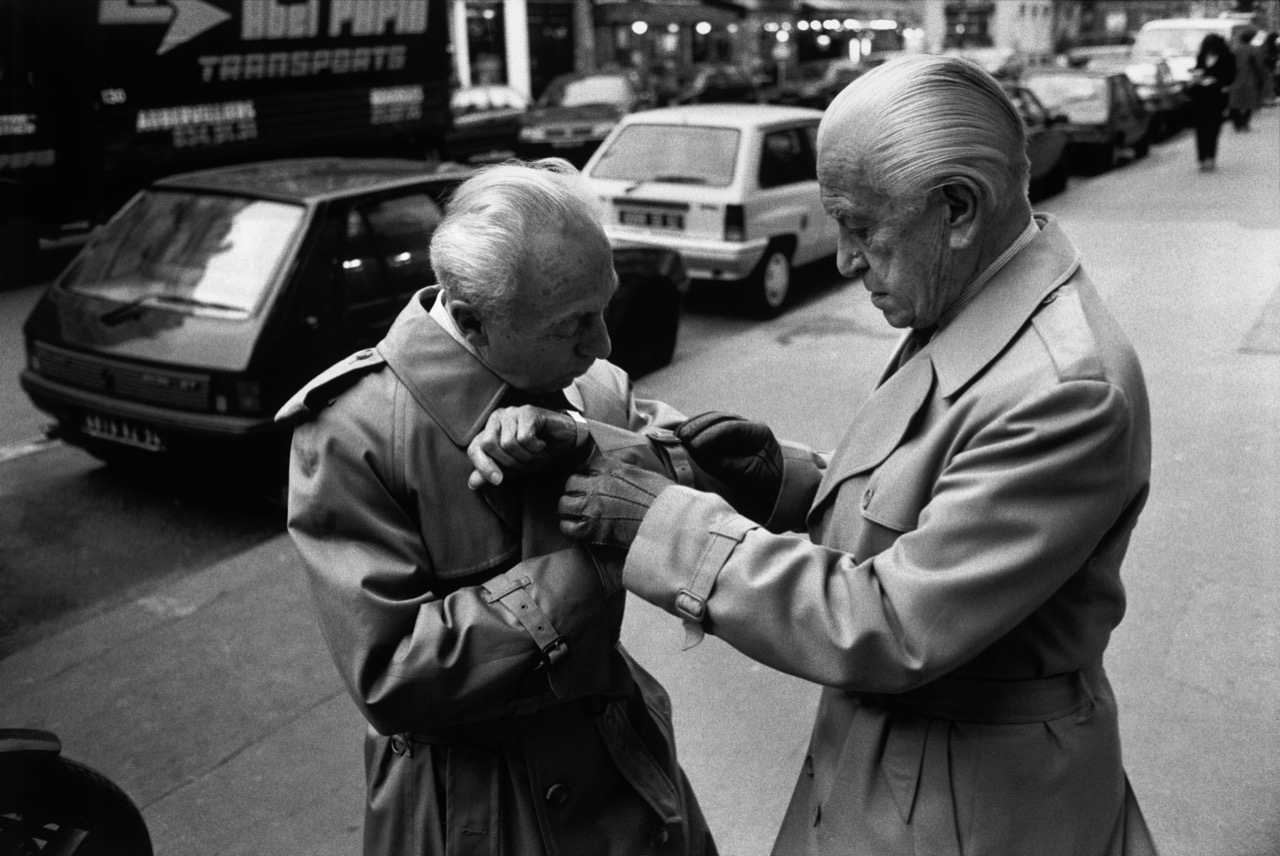