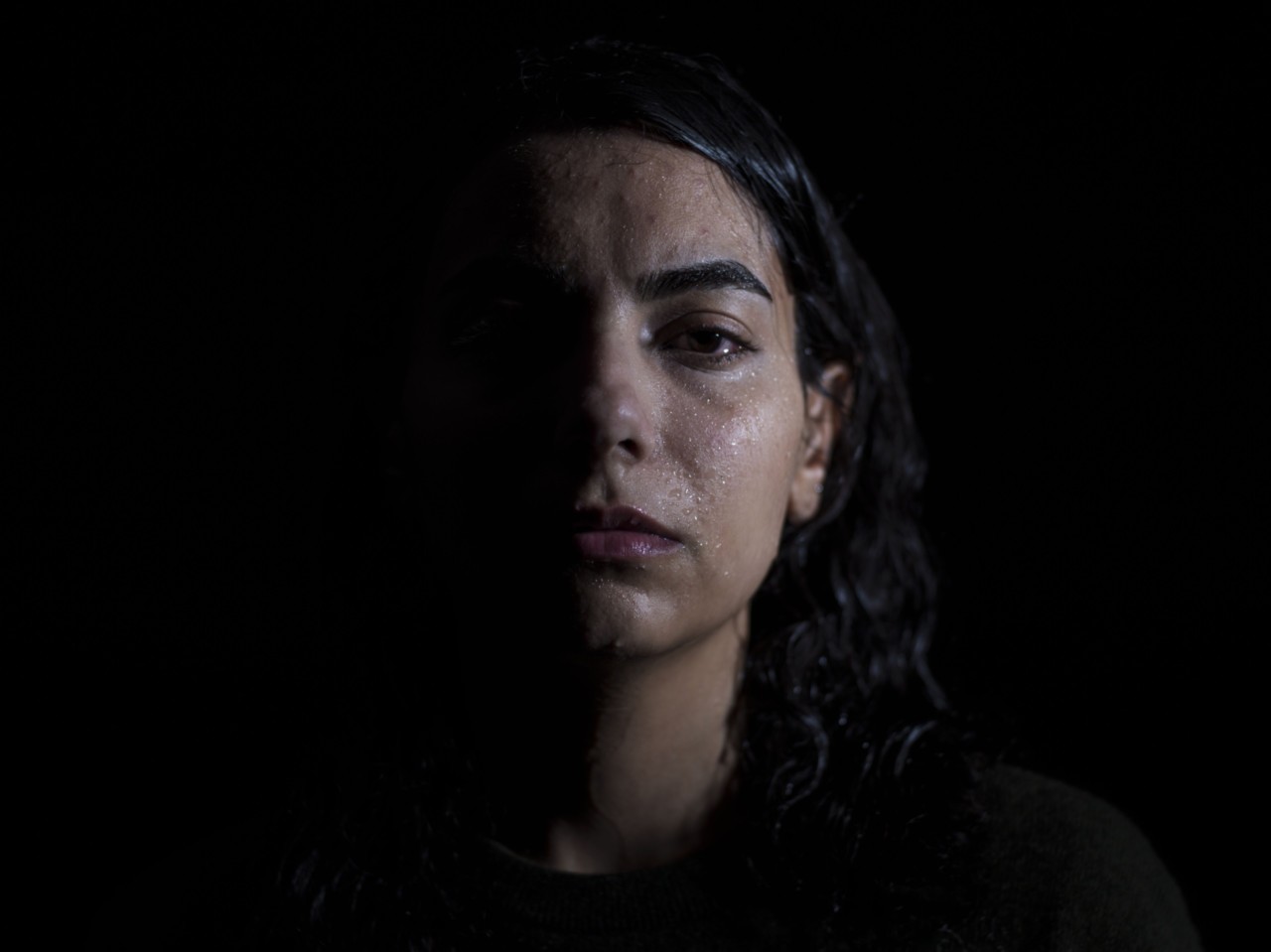 Newsha Tavakolian’s new project – an unnerving, coded, intense, and at times almost spectral film – is sound-tracked with the photographer’s monologue, overwhelmingly personal but informed by some of the 100-plus women she interviewed over the nearly four years it took to complete the work. ‘For The Sake of Calmness’ went on show at Tehran’s Argo Factory on October 4, and was at first presented absent of an artist statement or any explicit explanation. “Many people were confused, and at first I wanted them to be. I believe that the audience also needs to put something in, it is not the responsibility of the artist to put everything there on the table,” Tavakolian explains. “I wanted them to connect the dots in this very coded work. But, after two weeks I took to my Instagram to clearly state what the film’s topic is…”

See a short excerpt from ‘For the Sake of Calmness’ below.

For the sake of Calmness from Magnum Photos on Vimeo.

That topic is premenstrual syndrome (PMS) and the more severe syndrome, premenstrual dysphoric disorder (PMDD). Until four years ago the photographer had little to no idea about the causes and workings of PMS. All she did know was that since the age of twelve something had been changing her. “Once a month, for one week, I couldn’t function like I usually did. I couldn’t work, I didn’t want to see anyone. As each year passed the syndrome affected me more and more in my routines and daily life. At first I thought it was depression, but it seemed odd to me that depression would come to me only at certain, regular times.” 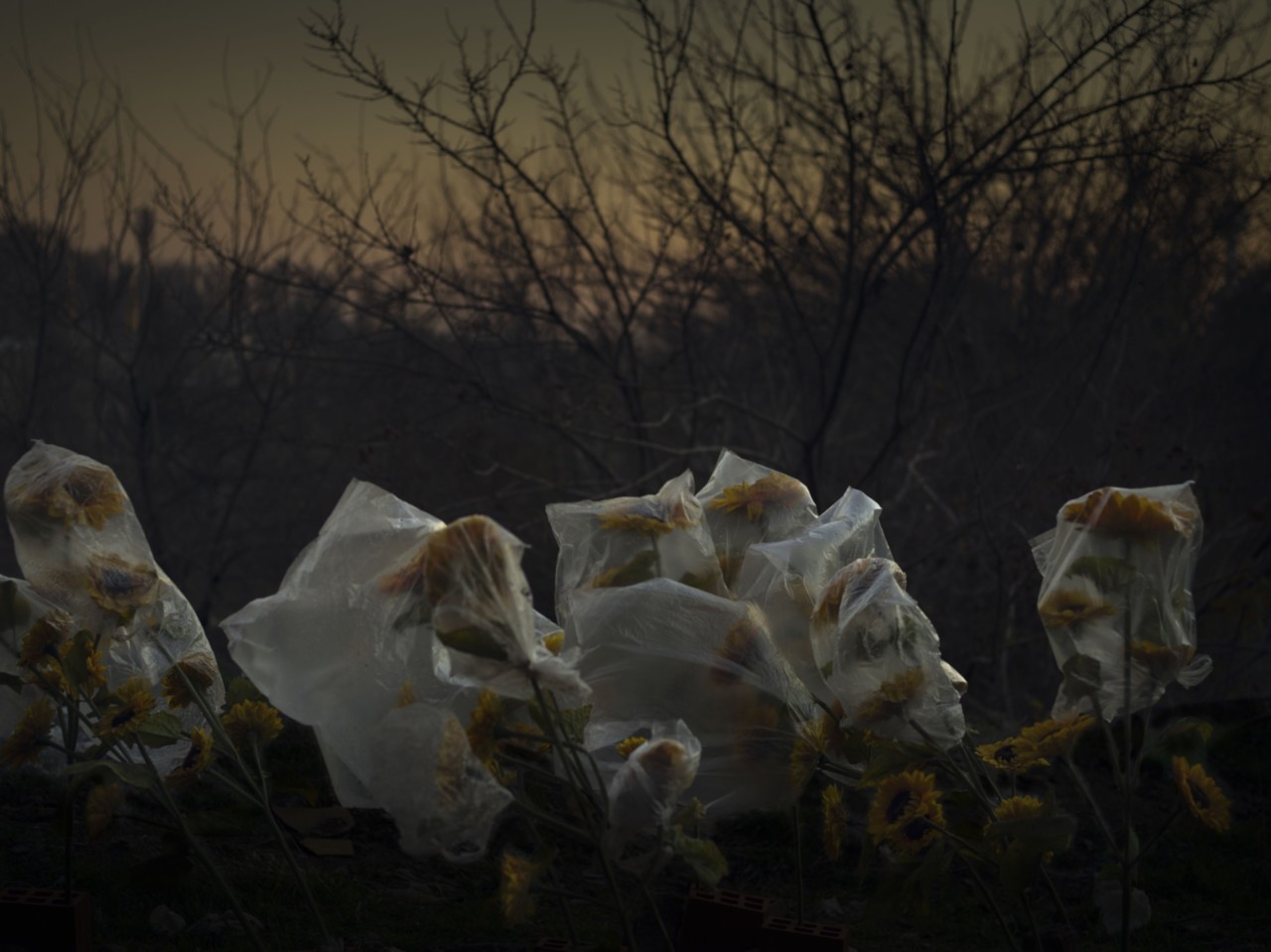 Tavakolian started researching and began a years-long dialogue with a neurologist – so that she could understand “what was happening in her brain”, during those weeks when she felt so different. Over time she learned that she was in the bracket of PMS suffers who feel the syndrome’s effects most intensely, to a degree that can lead some to feel suicidal. The photographer describes the syndrome’s effects as being “like a dark cloud settling over my head for a week at a time.”

“While the nature of my work is that while it often starts out in the personal realm, I always want to connect it to the world we are living in. As I got to understand the feeling of PMS more, I also found it to be a metaphor for the complex times we live in globally. I found that mother earth is on PMS. Being based in Iran, I found that this country too, with all its issues is suffering from PMS.” The film, with its lingering land and cityscapes, applies the tumult of emotions in the narration to place – as well as to people – though Tavakolian is quick to stress that it is not a film about Iran, “I live in Iran, so of course I see this PMS here, but to me the whole world is in a phase of PMS. When you get your period it’s like injecting morphine, everything becomes quiet, anxiety is alleviated, and you see the good and beautiful things around you. I think the whole world is hoping for that to come.”

For the project Tavakolian wanted to establish a relationship between landscape, history, imagination and reality. The result is a work with broad interpretations, which the photographer acknowledges: “Some viewers might relate to the sense of confinement, for me the work started with this dark and gloomy shadow that is cast over me each month, but it ends with my feeling that we are all suffering from this, in these times.” 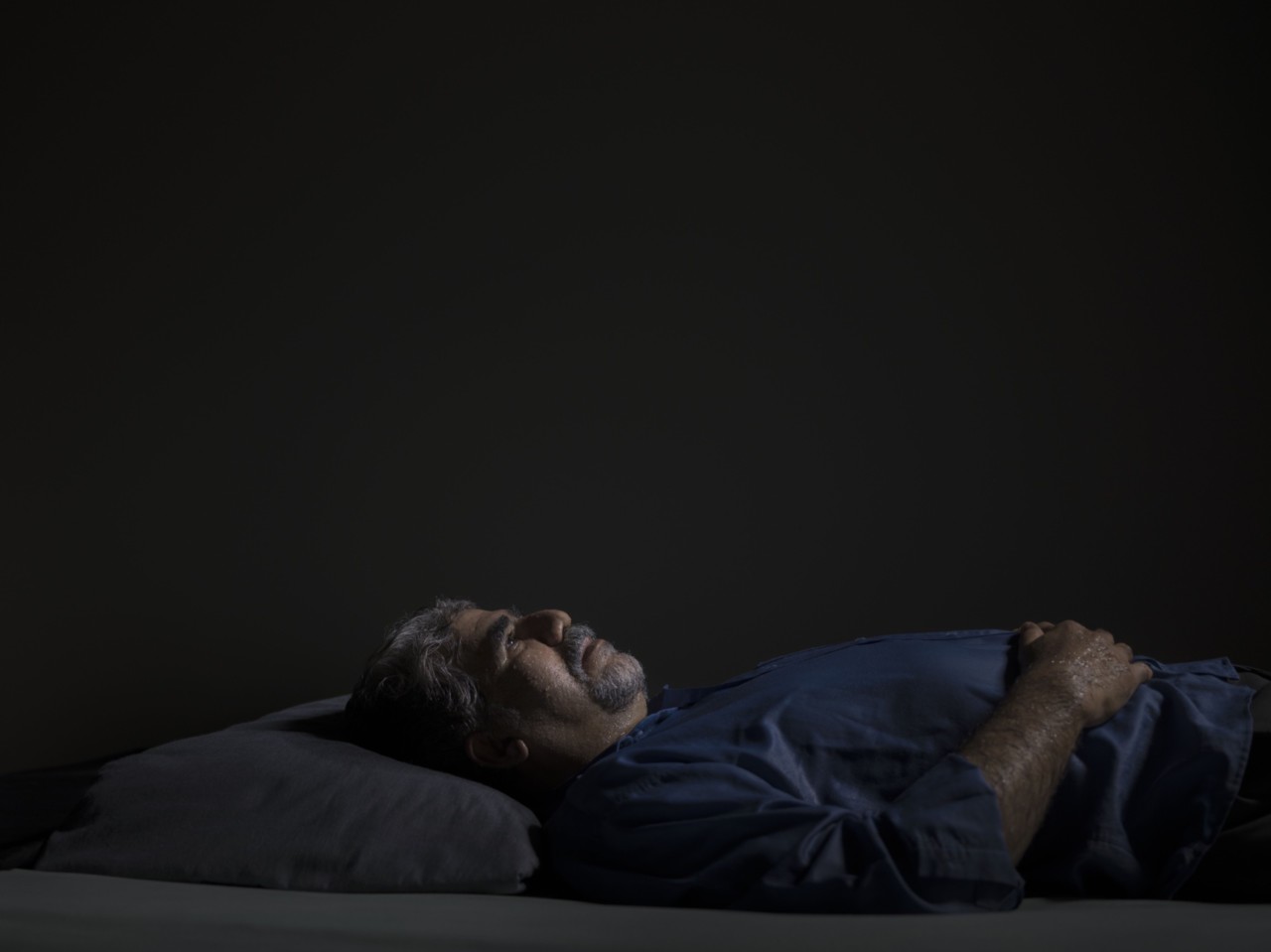 "After doing many interviews, and much reading, I came to feel that actually, on those days it is more that you see reality in full, not that you are separated from it... With PMS and PMDD one is effectively too engaged with the world." 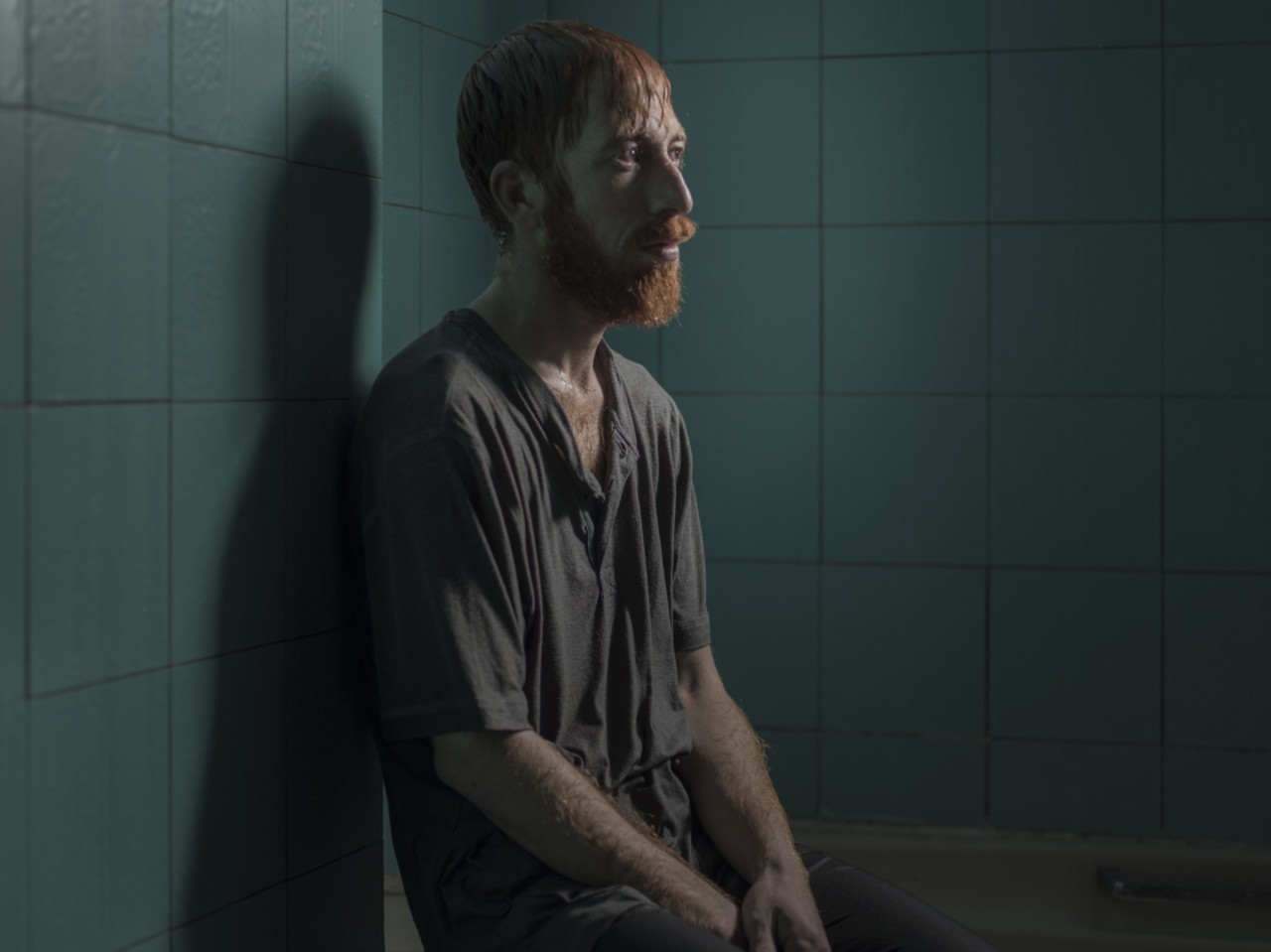 While the physical and psychological effects of PMS are themselves a key influence in spurring the making of the film, for Tavakolian it was a more ephemeral issue that she wanted the work to deal with, “The real question that interested me was this: on those days are you yourself, or not yourself?” The question is central to the film and is at the core of much of the monologue that conveys feelings of both being un-anchored to the real world yet also searingly affected by it.

“After doing many interviews, and much reading, I came to feel that actually, on those days it is more that you see reality in full, not that you are separated from it. You are seeing the world around you without any of the filters we usually apply. With severe forms of PMS one is effectively too engaged with the world.” Tavakolian goes on to liken these weeks of unfiltered connection to the world to the possession of a “sixth sense.”  And herein lies the dichotomy, “Women become more creative, more powerful, and stronger. But that is of course in conflict with the way in which many feel the need to close the door on the world over those days. Ultimately it usually it leads to isolation.”

Tavakolian had to overcome that natural desire to step back from the world in these weeks in order to harness those moments of heightened sensitivity and creativity. “For this project I made myself go out in those times. I would observe people and I see so much more. I started to see how I see, and I could see the difference in how I saw then and how I saw usually. PMS is such an abstract feeling. You cannot explain it well. I wanted to find a visual language that would convey how I, and how many women feel, and this seemed to be the way to do that.” 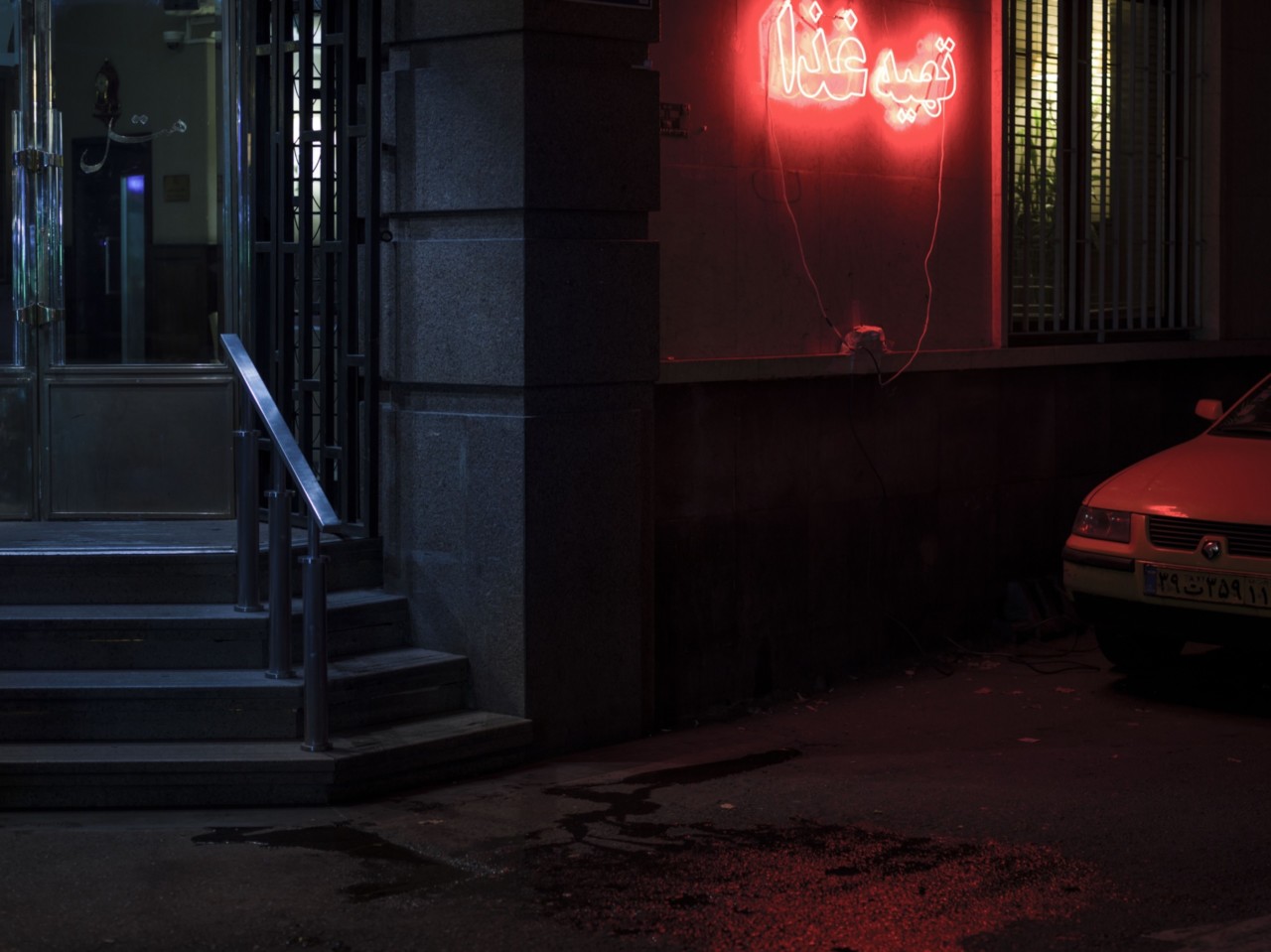 "I realised that I should do a film. With only still images I couldn’t translate or convey the feelings I wanted to. I wanted to experiment – this work really is a first for me – I followed my gut and didn’t want to limit myself. With severe PMS there is no limit, there’s no definition and no logic to it..." 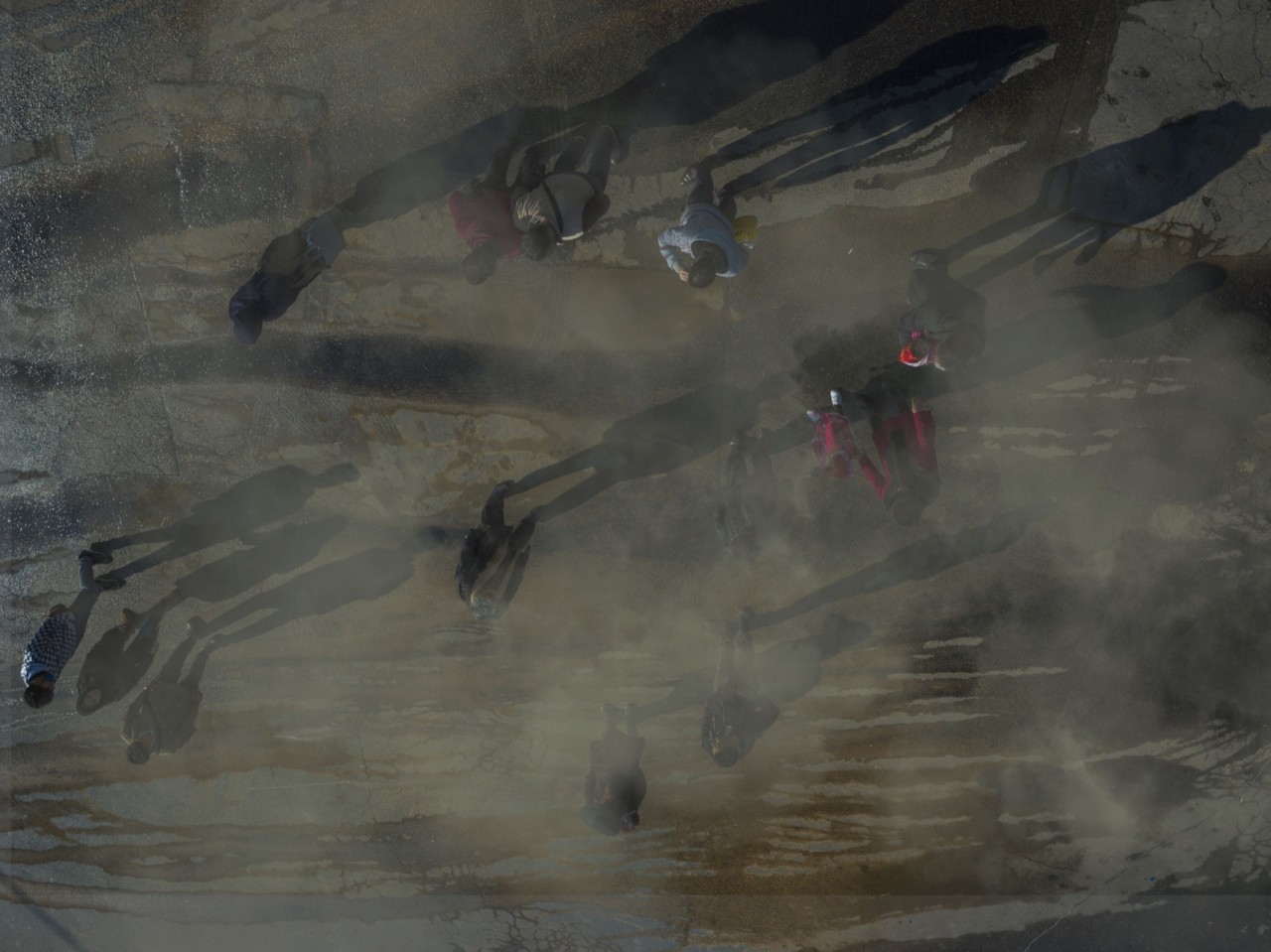 The project started out as a purely photographic one, more in line with Tavakolian’s previous works and was focused upon portraits and landscapes – but soon she realized that a subject as amorphous, and as abstract would need more. “I realised that I should do a film. With only still images I couldn’t translate or convey the feelings I wanted to. I wanted to experiment – this work really is a first for me – I followed my gut and didn’t want to limit myself. With severe PMSthere is no limit, there’s no definition and no logic to it – it can be anything and one’s feelings can go anywhere.”

The impulse to start the actual process of shooting the film came – perhaps unsurprisingly – while Tavakolian was experiencing one such period of PMS, a moment of clarity which motivated her to move quickly, a way of working at odds with her usually slow processes.

She teamed up with award winning cinematographer, Peyman Shadmanfar. “I had pictured everything already in my head, and I put it all down with the help of an illustrator,” the photographer explains. “Fortunately I knew that Peyman and I shared similar visions.” Alongside Peyman worked the film’s editor Pouya Parsamagham, known in Iran for his 2019 film ‘Gesture’.

Peyman didn’t know about PMS. “I worked with many men during the making of the film – none of whom knew much about these syndromes. We had many sessions talking about it, learning about it over the course of the shoot. It was interesting as a collaborative process – me and these men – talking about something so feminine in society that is so macho. But it was unbelievable how they came to understand.” 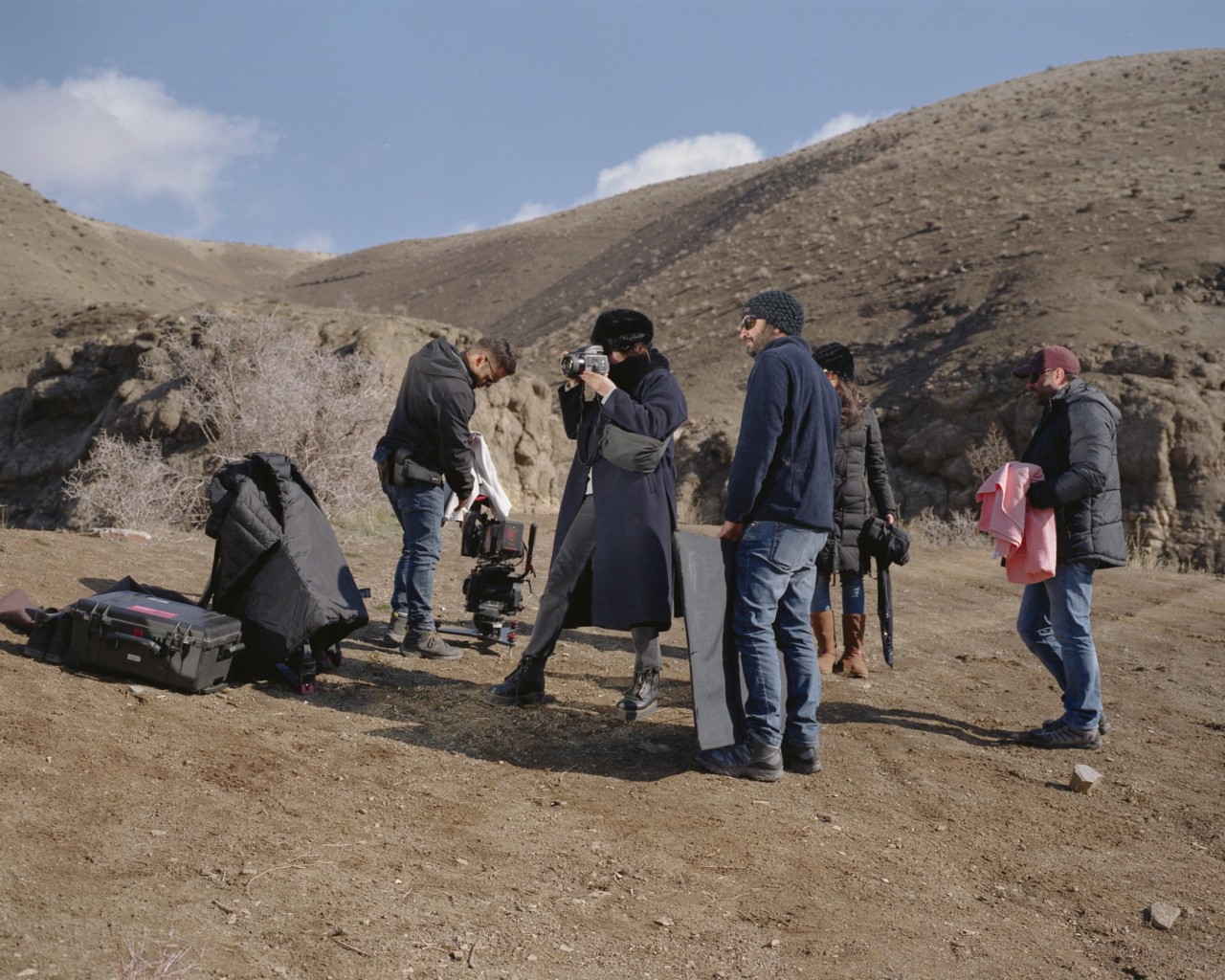 For the production, having looked through photographs of hundreds of students and aspiring actors Tavakolian selected a number, but is emphatic about the cruciality of chance and on-set influences in the film’s visuals, “While I had picked these faces, I am not an engineer in the way I work. Much of the film came together on the set – the colors, the ways in which the subjects worked with the backgrounds, the way that in some shots shadows went from being peripheral to being the main focus.”

This combination of willfully abstract approach and the sixth sense which Tavakolian believes is bestowed on those in the depths of a period of PMS led the photographer to shoot her parents as well as those actors. Unknown to her at the time, this would come to delay the film’s completion, a process already torturously slow as she endeavored to sync the soundscape of the film with the moving images and her own narrative.

“I had this feeling that I had to shoot my parents for this project – which is something I had never done before. I could see the scene in my mind – my mother sat alone, with time ticking past, and sat with my father, surrounded by family pictures, both looking into the camera. Unfortunately, the shooting of that scene was the last time I saw my father.” The photographer left Iran on an editorial assignment not long after the film wrapped, while abroad her father had a heart attack and died.

“As a result, the film became too much for me – I didn’t work on it for almost nine months. It was very difficult to look at the footage of my father, yet I knew I couldn’t delete him from the work. I waited until I was feeling better, until I was stronger, and I started looking over it and editing the film.” 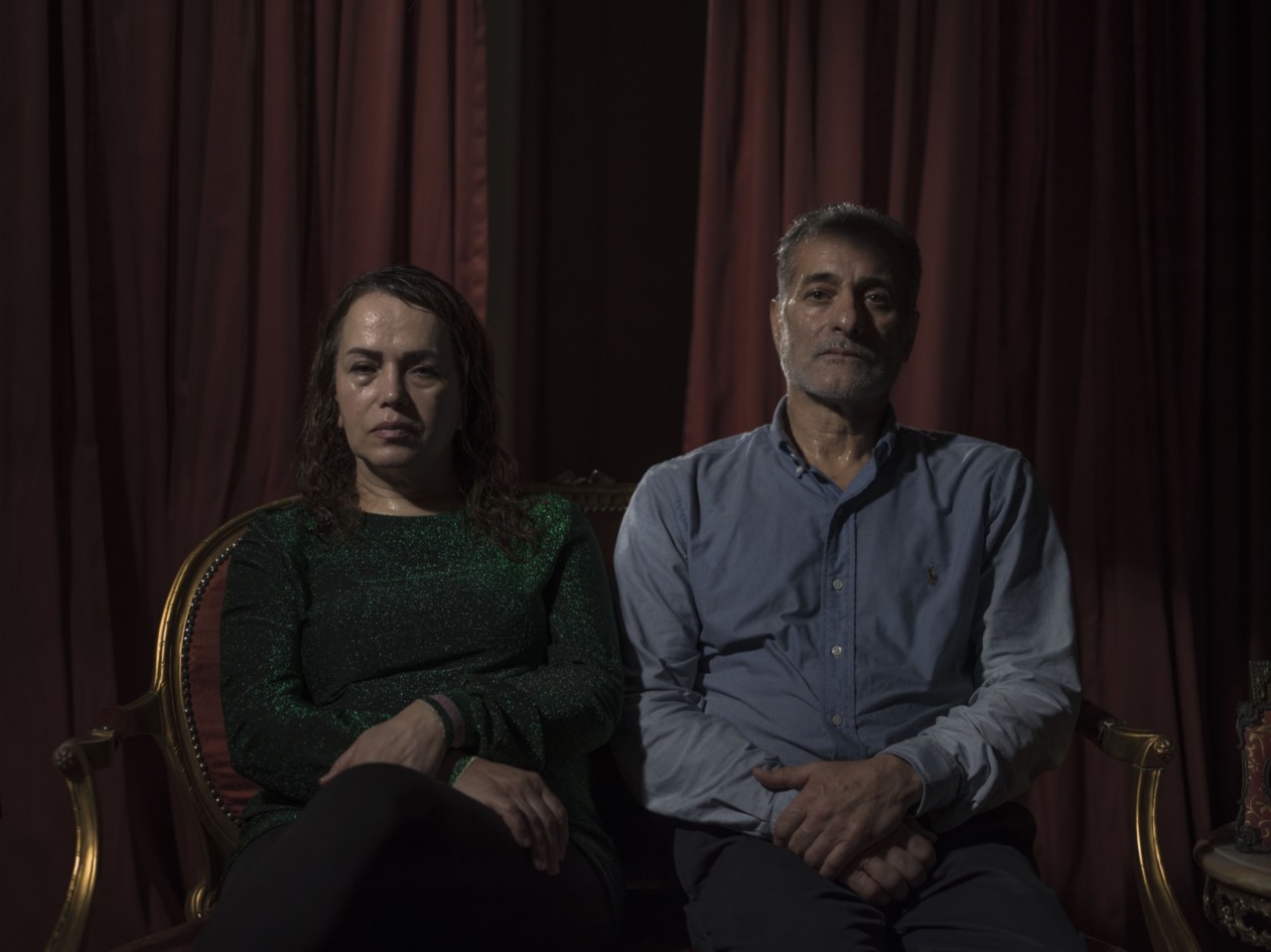 "The pair decided on screening the film in a tunnel-like portion of Argo’s concrete basement, with the viewer between a mirror and a large screen, and with high volume in an otherwise near-sound insulated void. The effect was intense: “Like the viewer is inside the film.”" 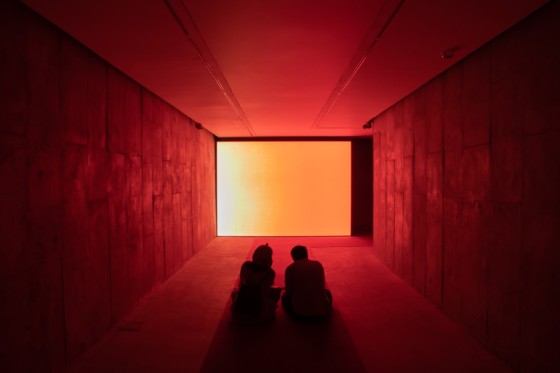 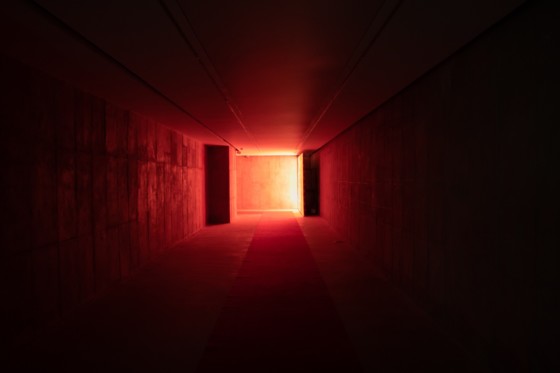 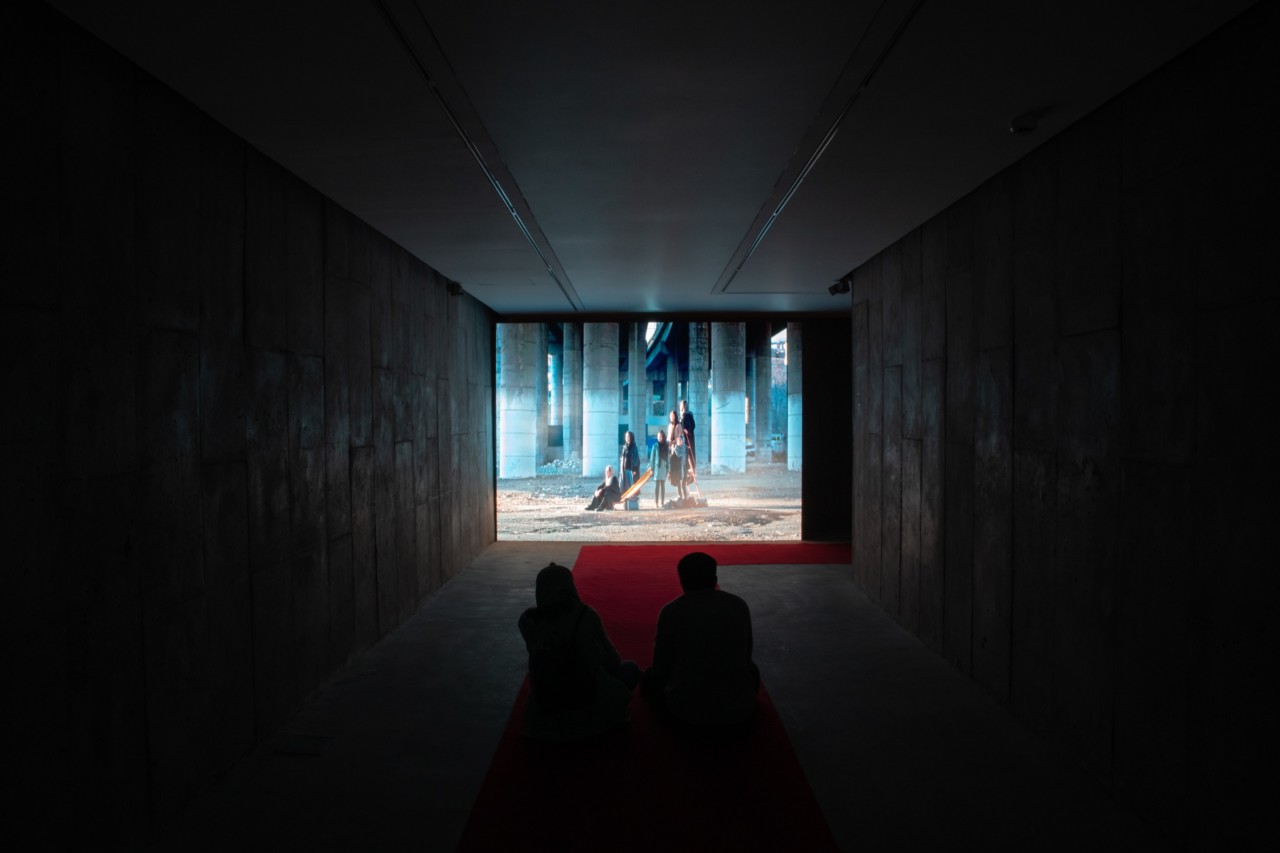 On October 4 the 20 minute film went on show in Tehran’s Argo Factory – a former brewery transformed by art collector Hamidreza Pejman into a private museum and gallery. The exisiting structure has been built into by architect Ahmadreza Schricker, creating a link between the contemporary arts and Tehran’s history: “It’s a mix of the old materials and new, it’s very beautiful, and overall it maintains its connection visually to the past.”

From the outset Tavakolian knew that the exhibition space for the film would be important, and knew that a standard gallery space would not work. Tavakolian asked Schricker to help create a space in a tunnel-like portion of Argo’s concrete basement, where the film is shown with the viewer between a mirror and a large screen, and with high volume in an otherwise near-sound insulated void. The effect was intense: “Like the viewer is inside the film.” This result the photographer attributes also to the work of the sound artist Kamran Arash nia, who worked on this film, as well as her project, Look.

Ultimately the making of the project also held benefits for Tavakolian’s own struggles with these two syndromes, “It was a journey of understanding, but I still don’t know when I am myself, during, or after?”

For the Sake of Calmess is on show at Argo until October 14, find more information here. The work will go one show at New York’s Thomas Erben gallery in January, 2021. 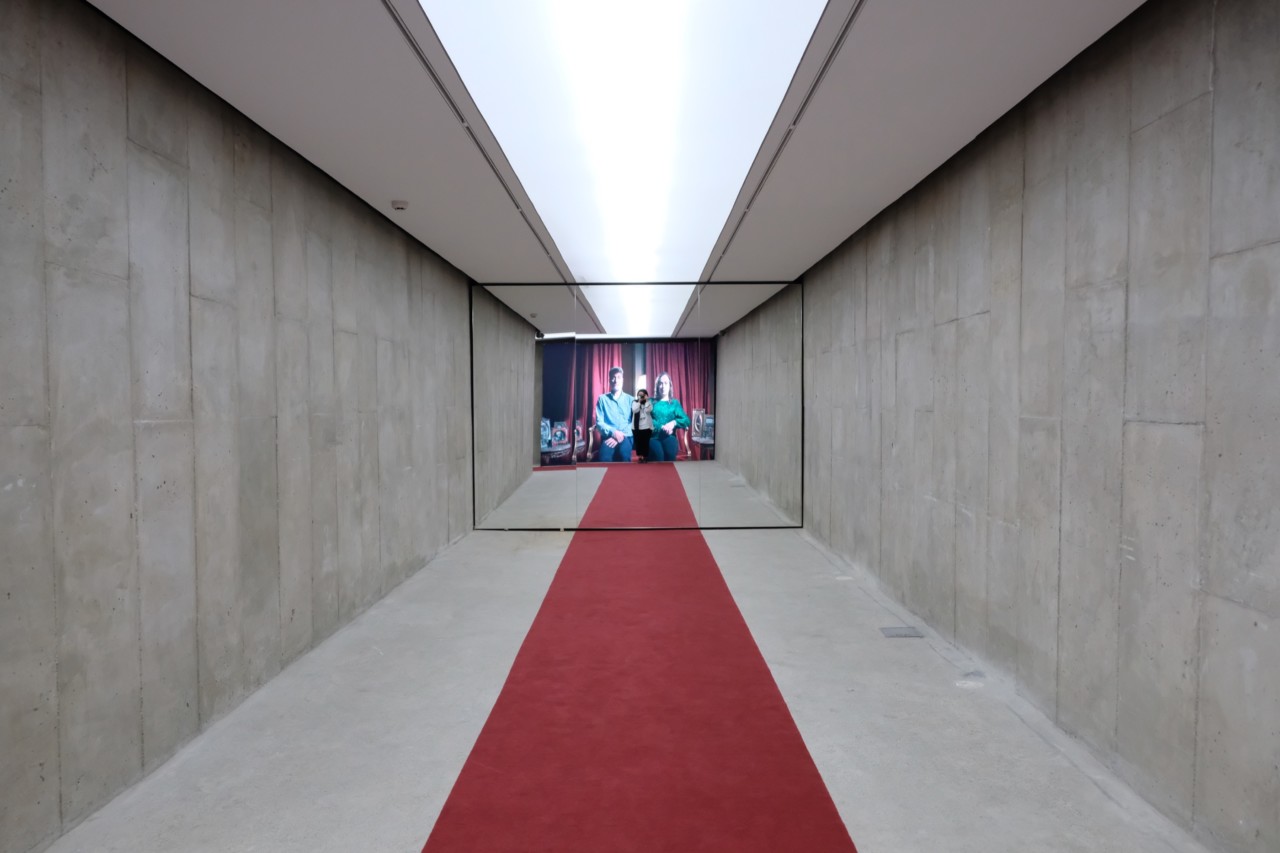 Let the Sun Beheaded Be