Alex Webb and Rebecca Norris Webb discuss their recent book, which pairs their distinct visions of their long-time hometown and echoes the borough's geography in its design Having collaborated on numerous photographic works over the years, notably the book projects Violet Isle and Slant Rhymes, Alex Webb and Rebecca Norris Webb have most recently turned their attention to Brooklyn, their home of over 20 years. Their distinct interests and working processes have resulted in, Brooklyn: The City Within, a book which Webb describes as “a musical piece in three movements, distinguished by different rhythms” – with his photographing the famously diverse neighbourhoods and inhabitants of the borough, while Norris Webb dwelt upon the “green spaces at the heart of Brooklyn,” pairing short texts with her images. The book’s design echoes this dichotomy, resulting in a physical object which neatly emphasises the variety of the place.

Here, the pair discuss the project, its design and development, and the borough’s literary and photographic influences.

Signed copies of Brooklyn: The City Within are available in limited quantity on the Magnum Shop — browse this and further books on the theme of New York, exploring the impact the city has had on Magnum photographers, in our our curated collection here. 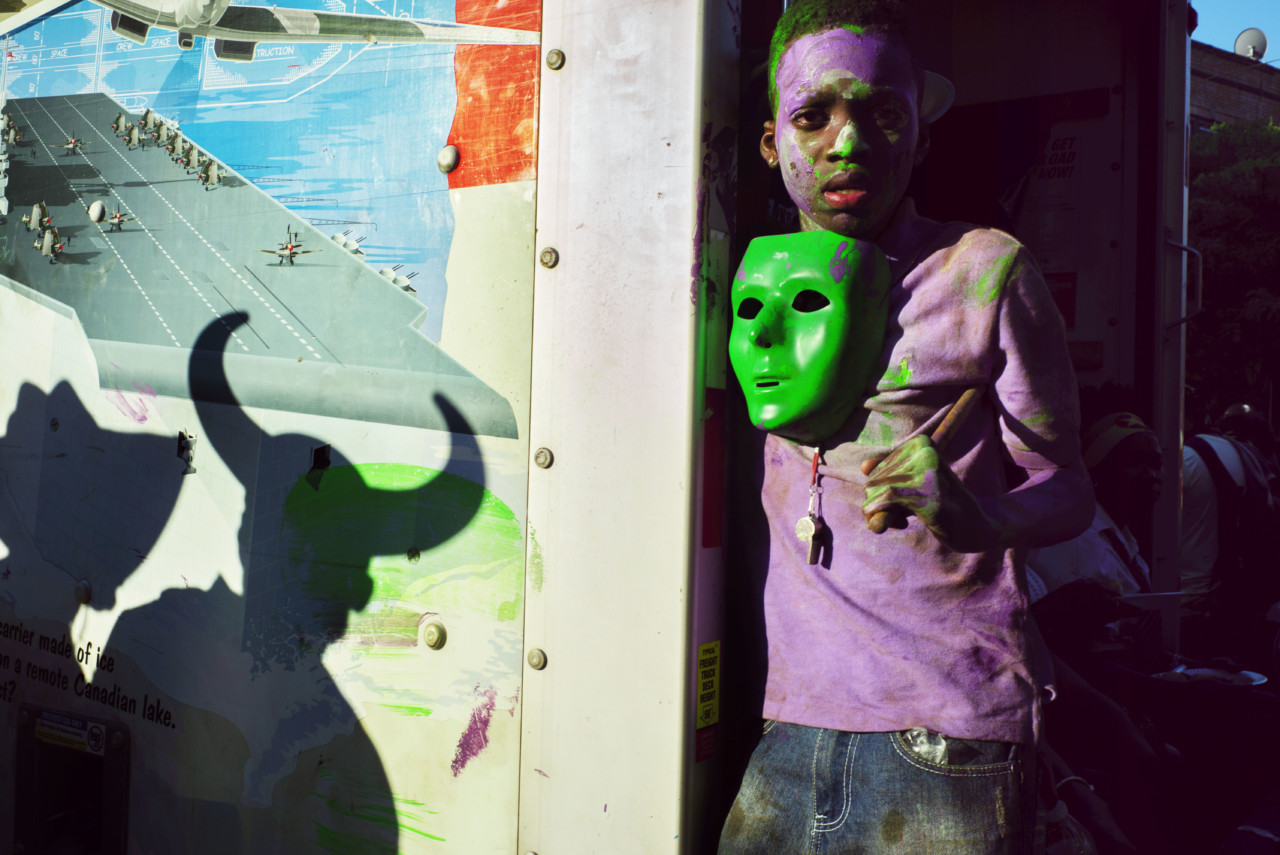 I suppose—somewhat obviously—one must first ask, why Brooklyn? The borough has been photographed a great deal over time, what aspects of your hometown did you both hope to reveal through this five-year plus project? And was the number of past photographic projects on Brooklyn an impetus in making this work, or a cause for trepidation?

Alex Webb (AW): The genesis for this project began with the realization that Rebecca and I will eventually leave Brooklyn—although precisely when is yet to be determined. We thought that the best way to begin to say farewell to our home borough was to make a collaborative book that reflected our respective photographic visions of Brooklyn, the place where we began our life together some 20 years ago.

Although Brooklyn has been photographed extensively in the past, many of the photographs that I remember are in black and white, including work by Robert Frank, Garry Winogrand, Thomas Roma, Bruce Gilden, and Eugene Richards. So photographing in color in Brooklyn seemed fairly unexplored. I don’t think either of us felt intimidated by the weight of past photographs of the borough. Brooklyn has a long literary history – did that play any role in your combined approach to the work?

AW: Two books in particular spoke to me: James Agee’s little-known book, Brooklyn Is, which was initially commissioned by Fortune and never published by the magazine (just like, interestingly enough, Agee’s essay that ultimately became the text for his collaborative book with Walker Evans, Let Us Now Praise Famous Men), as well as Phillip Lopate’s essay “Brooklyn the Unknowable,” a wonderful piece that embraces the vastness and complexity of the borough. Wandering around Brooklyn also brought to mind a memoir that I’d read years ago by a family friend who grew up in the borough, Alfred Kazin, called A Walker in the City.

Rebecca Norris Webb (RNW): I’ve also been inspired by the long tradition of creative conversations in Brooklyn. I think of Walker Evans’s photographs of the Brooklyn Bridge that accompany Hart Crane’s book-length poem, The Bridge. The pair first met under the Brooklyn Bridge, and sometimes took “photography walks,” as Crane called them, during which they discussed the relationship between poetry and photography, and how the two arts might work together. Additionally, I think of the longtime literary friends, Elizabeth Bishop and Marianne Moore. The younger Bishop often visited her mentor, Moore, at the latter’s Fort Greene apartment, to talk about poetry.

And I guess you could say the interweaving of my photographs and text pieces in Brooklyn: The City Within is a kind of creative conversation with Walt Whitman, and this line of his from Leaves of Grass: “Speech is the twin of my vision…” "Walking and photographing the three green spaces near where we live—Prospect Park, Brooklyn Botanic Garden, and Green-Wood Cemetery—allowed me to return to my street photography roots" Alex, as a self-described street photographer—how does photographing in your home borough, the familiar, differ from working in say Haiti, or Cuba? What are the boons and the drawbacks of making work within your everyday context? Does familiarity breed a sharper eye, or can it make one impervious to points of visual interest?

AW: I found that photographing in Brooklyn—a richly multicultural and complex urban world—was not so different in spirit than my photographing other cities around the world. And in Brooklyn, I was often walking streets that were unfamiliar to me. Until I began this project in 2014, what did I know of Bath Beach or East Williamsburg or Bensonhurst or Sheepshead Bay?

Whether I’m photographing near or far from where I live, I try to embrace a sense of discovery. "I tend to dive in, throwing myself into photographing immediately, and Rebecca often wades in, needing time to discover the metaphors that guide her work" 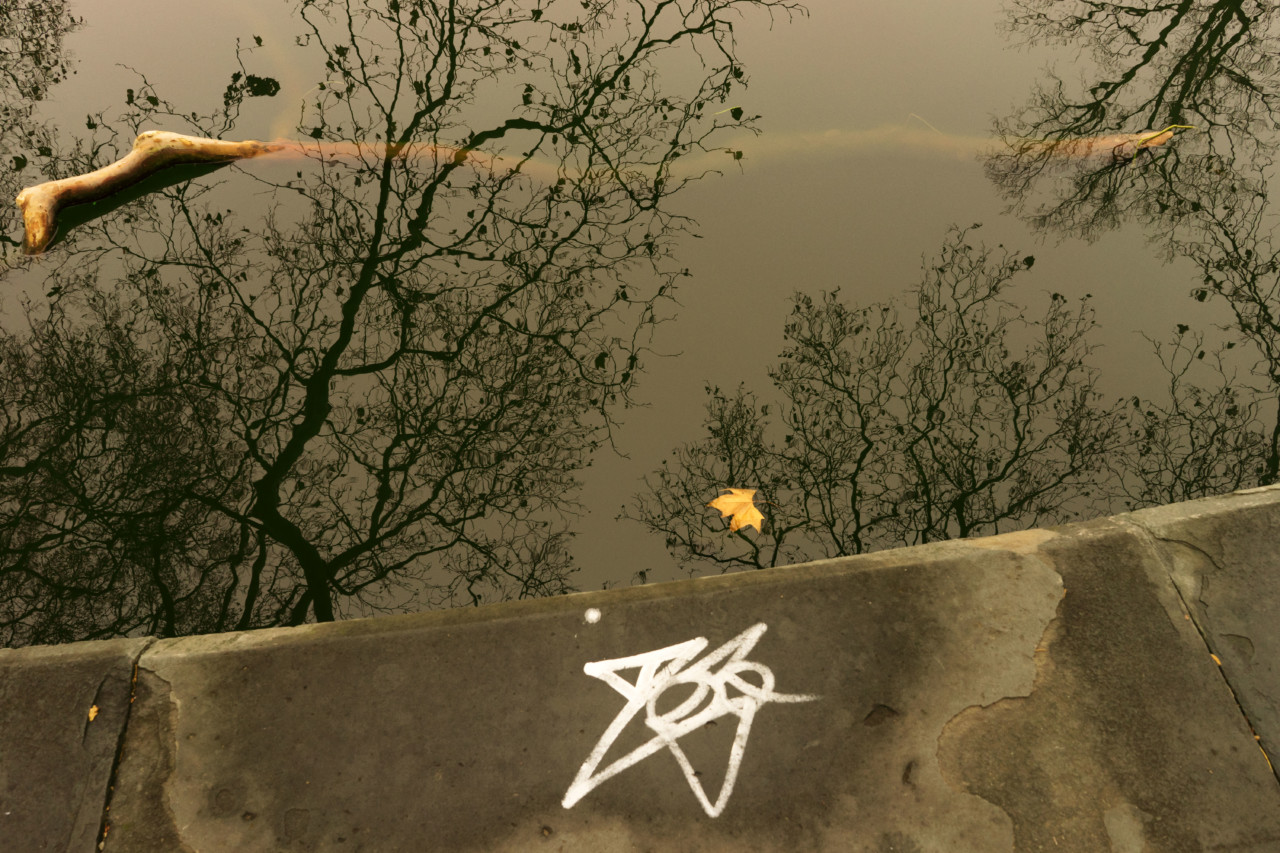 You have both spoken before about approaching photography in distinct ways: Rebecca about taking a poetic or literary starting point and exploring it through image making, while you, Alex, have said that you need to be in a place, to walk it, to see it. Do these—I am sure rather simplistic—summaries of your approaches still hold true today?

AW: For me, the act of photographing is about spontaneous discovery—seeing and responding, not thinking or analyzing. The ideas that exist in my photographs emerge out of the images themselves. They do not come from a priori notions.

RNW: Walking and photographing the three green spaces near where we live—Prospect Park, Brooklyn Botanic Garden, and Green-Wood Cemetery—allowed me to return to my street photography roots. As a young photographer moving to New York from the Great Plains to study photography at ICP some 30 years ago, I was drawn to Helen Levitt’s work. Her images inspired me to try my hand at spontaneous street photography—often of children—and to work in black and white. Moreover, while working on Brooklyn: The City Within, I learned that Levitt grew up in Bensonhurst. This made me wonder if she’d walked through the same green spaces where I’ve walked, and what would have caught her eye. No surprise that Levitt appears in one of my text pieces, which arose while wandering with my camera through Prospect Park’s Long Meadow at dusk, when the streetlights were flickering on again. Rebecca, the poems in your section of the book, which break up your images—can you explain the process behind the writing of these?

RNW:  Each of the nine short text pieces speaks directly to the photograph that immediately follows it—sometimes directly, sometimes at a slant. In each case, my writing and its accompanying photograph focus on an image that I’ve come across while wandering through these green spaces. The difference, I guess, is that while holding a camera in my hands, the image stops me in my tracks—literally; whereas the text pieces are often sparked by the rhythm of walking itself, which, in turn, sets the mind adrift into a daydreaming mindset that floats freely between past and present, recollection and reflection. Taken together, I hope that my words and photographs expand on the notion of landscape in Brooklyn to include not only the shifting light illuminating a particular mute swan or elm tree or young woman’s face, but the dark shadows of history falling across these green spaces—Prospect Park was once the site of a Revolutionary War battle—and the memory and reverie flowing through it. 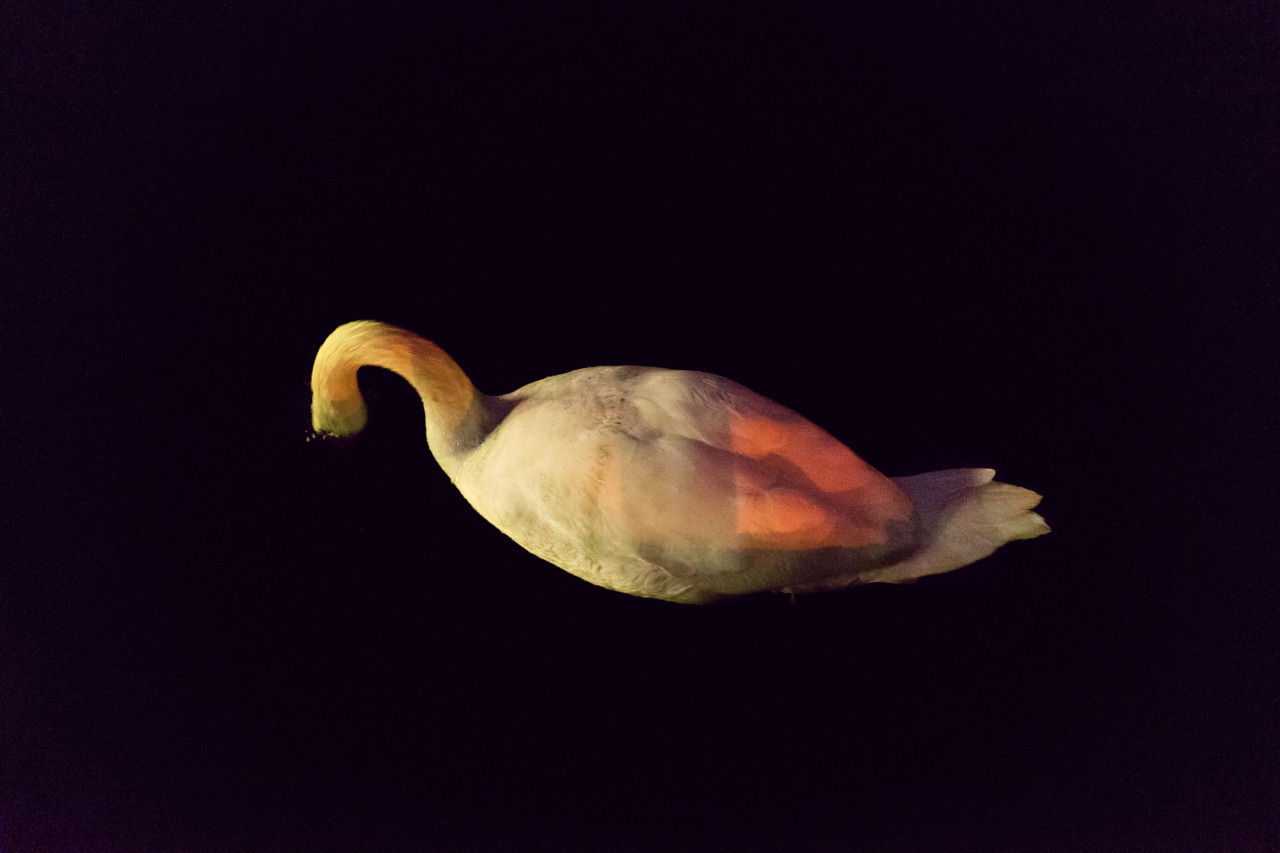 "While holding a camera in my hands, the image stops me in my tracks—literally; whereas the text pieces are often sparked by the rhythm of walking itself" Even your joint website’s design clearly displays your working partnership and overlapping projects. This will be the fifth book you have made together. Did your approach to this subject—the book itself in terms of its edit, design, sequencing and so on—differ markedly from processes used to make say, Violet Isle?

AW:  For us, Violet Isle is unique because it was our first collaboration and—most importantly—because it was unintended. We had worked independently on two separate individual projects in Cuba for nearly 15 years before deciding to bring our respective bodies of work together in one volume. The process was highly experimental and filled with uncertainty. All our subsequent collaborations have started as joint projects. So for our later collaborations, including Brooklyn, we’ve had to deal with our very different rhythms of work: I tend to dive in, throwing myself into photographing immediately, and Rebecca often wades in, needing time to discover the metaphors that guide her work. Our Brooklyn book differs from our other collaborations in that our respective bodies of work are totally separate. The book’s physical nature is a play upon the geography of Brooklyn itself. Can you talk us through how that design echoes the geography, and the nature of the place?

AW: Rebecca photographed the three green spaces in the heart of Brooklyn, all of which lie in the geographic center of the borough. Meanwhile, I photographed all over the borough.  Her pictures make up the middle of the book, and mine are at the beginning and the end. Furthermore, her pages have a smaller trim size than mine, making her section feels like a “book within a book.”

We often make the analogy between sequencing a book and music. In this instance, Brooklyn seems like a musical piece in three movements, distinguished by different rhythms. So my first and third sections follow the more staccato, sometimes contrapuntal, tempo of the Brooklyn streets, and Rebecca’s middle section strikes a slower, more meditative note—a kind of andante.

RNW: In addition, since my images are bled to the edges of the pages, this design visually echoes that sense of immersion one feels while walking through these green spaces. For me—and I’m sure for many of our fellow Brooklynites who are painters, poets, architects, actors, novelists, photographers, and other artists—leaving the more hectic, urban world behind and entering all that green can inspire a kind of daydreaming, where one feels transported to the past, to other places, or, at times, deeper into a creative project that one is working on. As I wrote in one of the text pieces:

I wonder how many of us now—this moment in Brooklyn—find ourselves inhabiting two worlds at once? 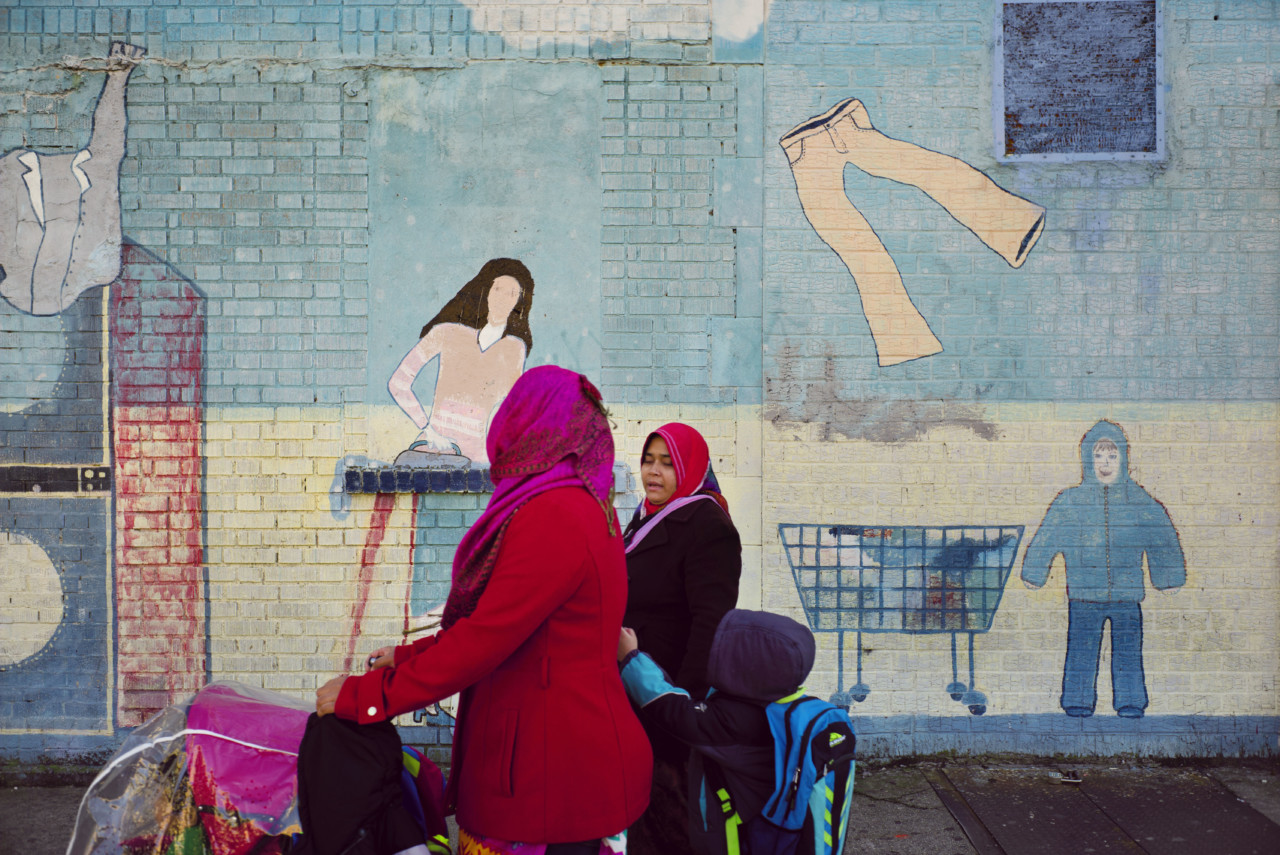