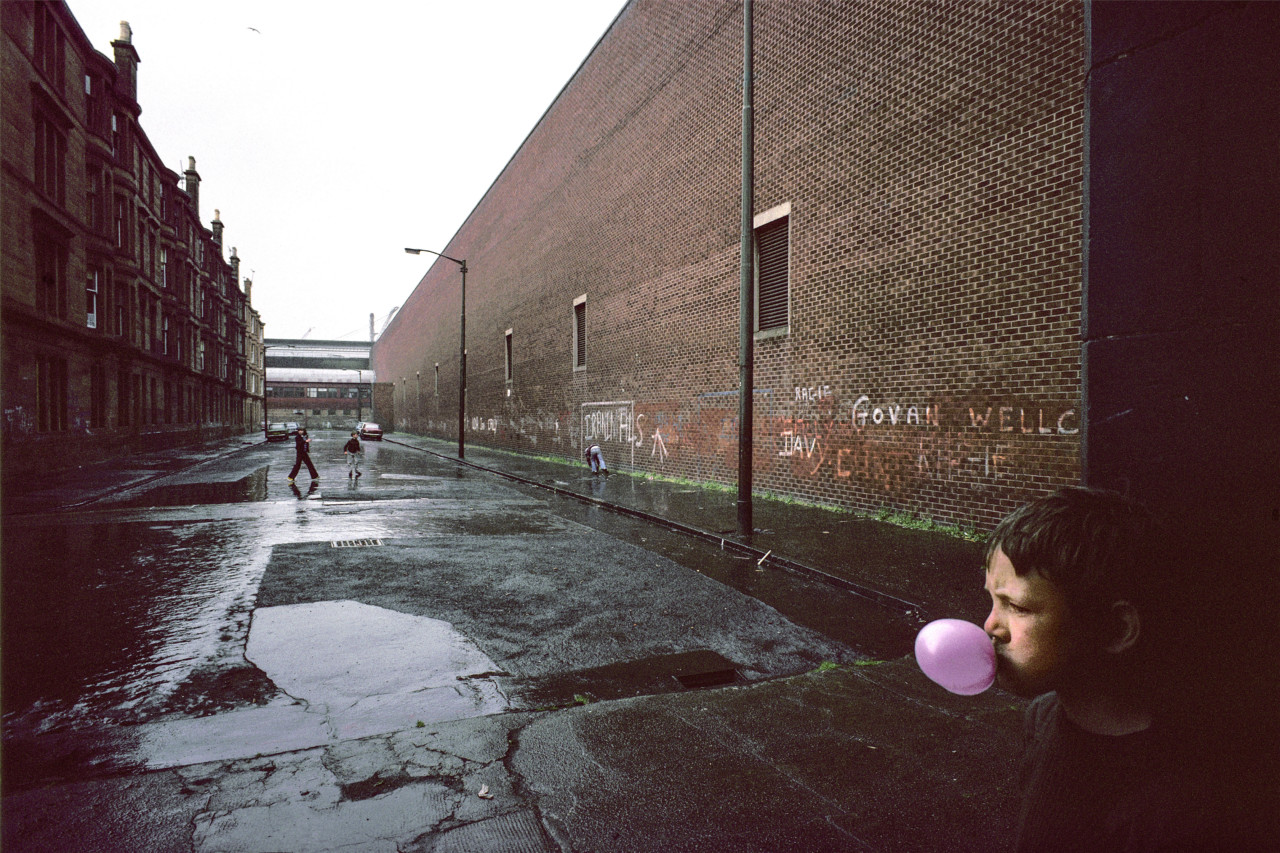 In 1980 French Magnum photographer Raymond Depardon was commissioned by The Sunday Times Magazine to photograph Scotland’s largest city: Glasgow, on the River Clyde. The city has long been known for its architectural heritage – from its majestic Victorian squares to stern rows of tenements and brutal industrial giants – much of this building being the product of the city’s great Victorian-era wealth. However, in spite of this prosperous past and the city’s pivotal role in Britain’s industrial and cultural development, numerous areas of Glasgow were – at the time of Depardon’s visit – poverty stricken. The photographer focused his work on Glasgow’s famed slums and dock areas, capturing the imposing architecture and broad vistas, as well as the resilient nature of the city’s inhabitants. The work resulted in the book Glasgow, published by Editions du Seuil in 2016. The following essay, by best-selling author William Boyd, appeared as the book’s foreword.

A new collection of fine prints by Raymond Depardon – including a number from his Glasgow project – are available now on the Magnum Photos Shop.

I lived in Glasgow from 1971-1975 – I was a student at Glasgow University — and so came to know the city very well indeed. I have been back to Glasgow several times every year since then – my wife has family there – and I have seen at first hand, over the last four decades, the city’s striking evolution from 19thcentury relic to the modern, vibrant conurbation it is today.  It’s an intriguing idea to contemplate that when Raymond Depardon was in Glasgow in 1980-82, when he was taking these remarkable photographs, so was I. Conceivably our paths may have crossed, tangentially.  What he was seeing and photographing were scenes that were very familiar to me.

But not to anyone else, I imagine.  This is a risky generalisation but, outside of Scotland, I would say that Glasgow is something of a secret city. Indeed, when I think of other provincial cities in Britain – Leeds, Manchester, Liverpool, Birmingham – I realise I hardly have any real cognisance of them, any real idea of them, even though I have visited them from time to time. If this is true of my own country, then perhaps we can say that all big provincial cities in other countries are also secret cities to foreigners. What do we, the British, know of Lyon or Lille, for example, or Leipzig or Stuttgart, or Turin or Genoa, and so on?  Glasgow, however, is a very interesting example. It’s an old city, a medieval city, but it reached its apotheosis at the height of the British Empire in the middle of the 19thcentury. It was rich, mercantile, bourgeois, burgeoningly prosperous. It has been described as the greatest 19thcentury city in Britain, with good reason. 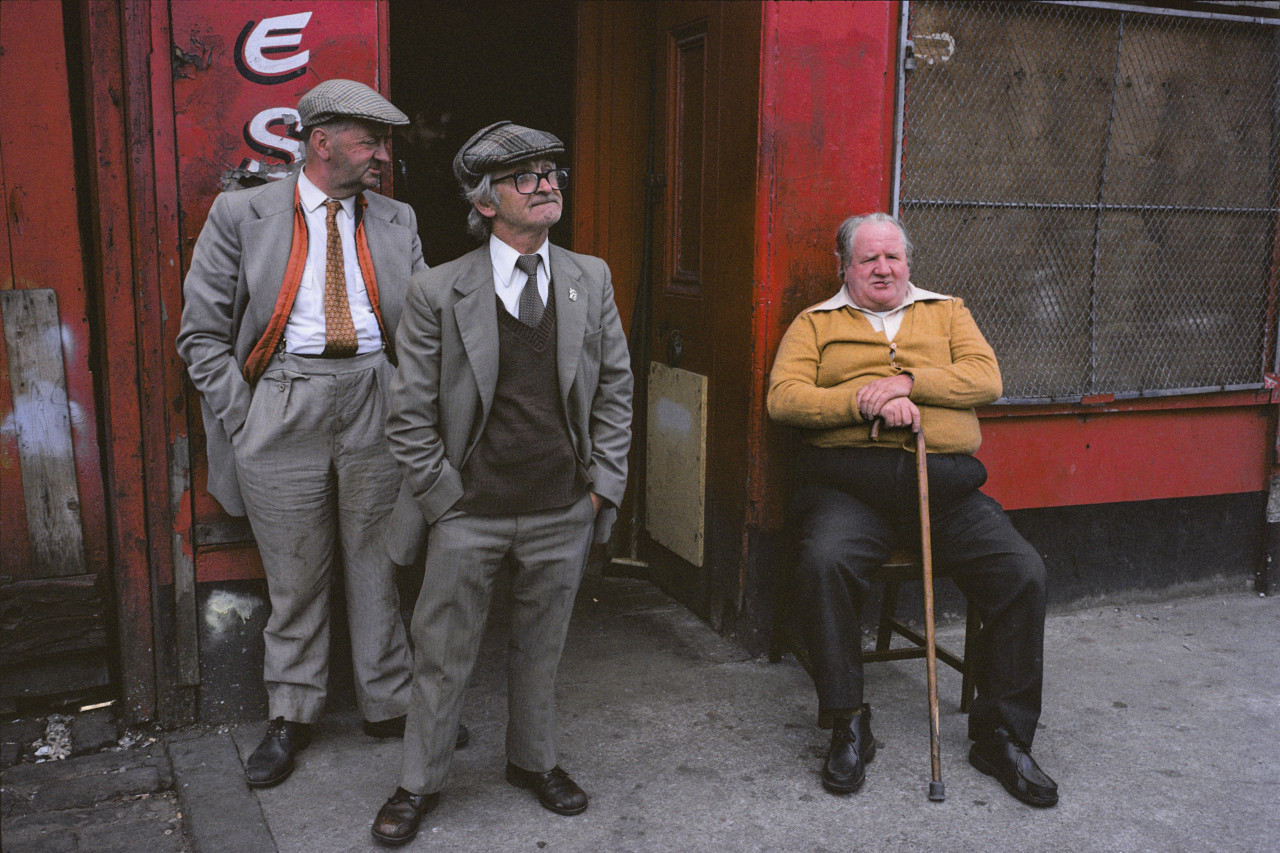 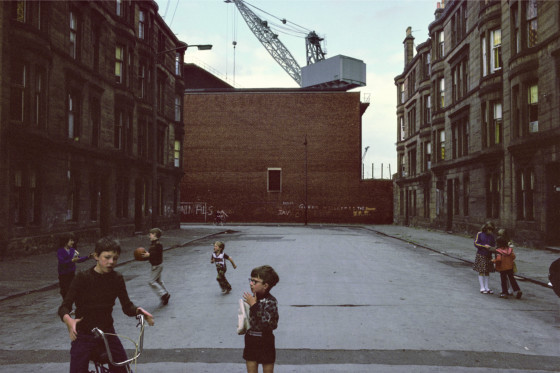 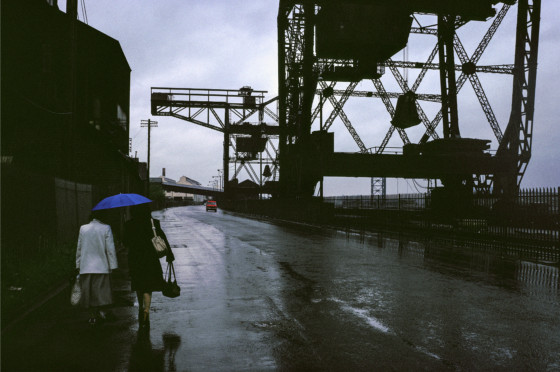 "You were very aware of how hard the lives of the denizens of these districts were. It wasn’t just the manifest decrepitude of the housing or the diminished quality of the goods in the shops — you saw deprivation and desperation etched in the faces of the young and the old" 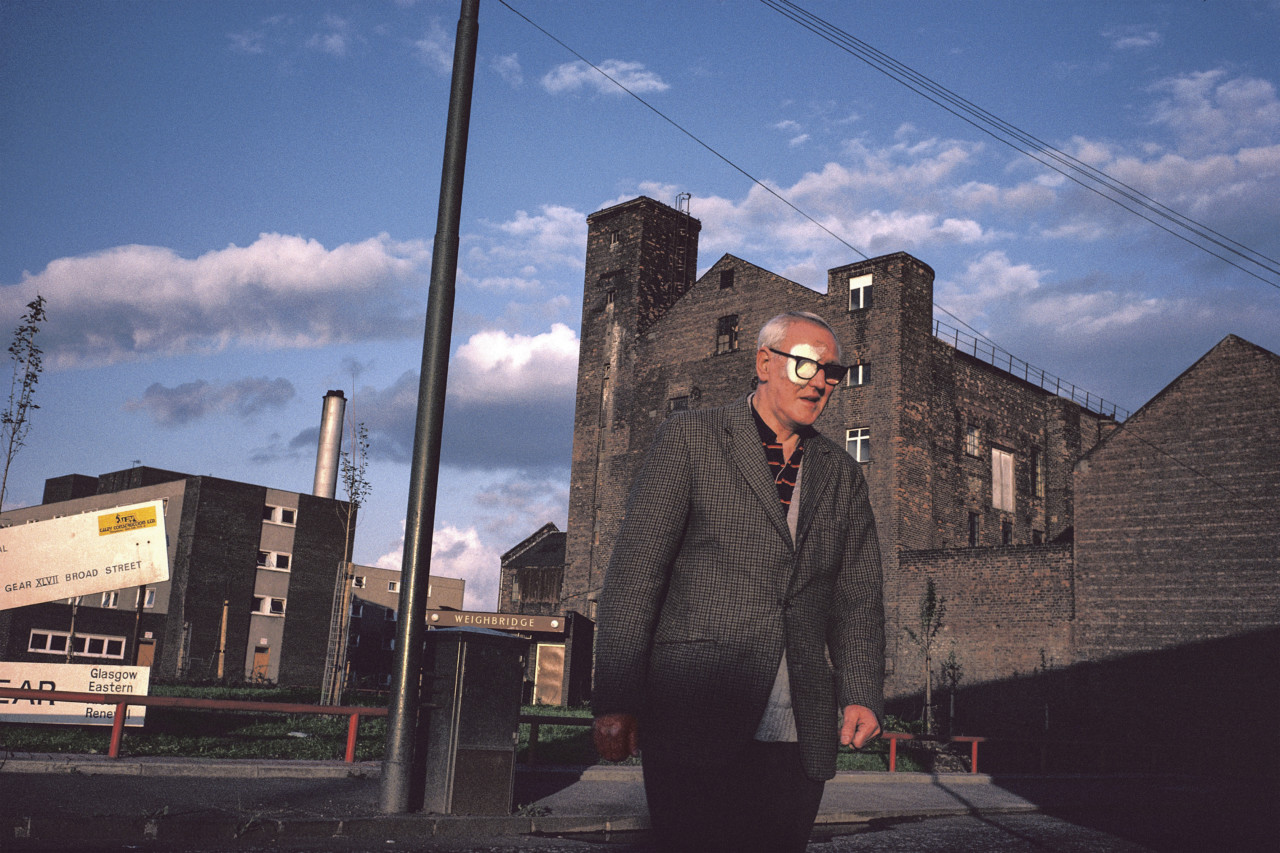 But when I went there in the 1970s, and when Raymond Depardon was there in the early 1980s, its glory days were far behind it and its glittering future lay many years ahead.  When you left the centre of town, or the area where the university was (in the city’s west end) it was very easy to find yourself in a neighbourhood of abject urban poverty and squalor. You were very aware of how hard the lives of the denizens of these districts were. It wasn’t just the manifest decrepitude of the housing or the diminished quality of the goods in the shops — you saw deprivation and desperation etched in the faces of the young and the old.

I have a vivid memory from the early 1970s of walking back at dawn (after a party) through Govan – a dockside parish of the city that Depardon photographs in this collection. It was probably raining – sometimes it seems to rain every day in Glasgow — but I remember I was struck by the contrast between the austere solidity of the 19thcentury buildings, the long high rows of tenement flats, as they are called, and the abject meanness of the wide empty streets I was walking through. There were patches of weed-strewn waste ground with smouldering fires, metal-shuttered shop fronts as if ready to repel a siege, abundant litter, wheel-less abandoned vehicles, graffiti – often of a virulent sectarian religious kind – and, when I encountered the odd person out and about at this early hour, a feeling of alarm. I felt I was an alien in an alien land. Certain districts of Glasgow were dangerous. You passed by another person quickly, with no eye-contact, head down. 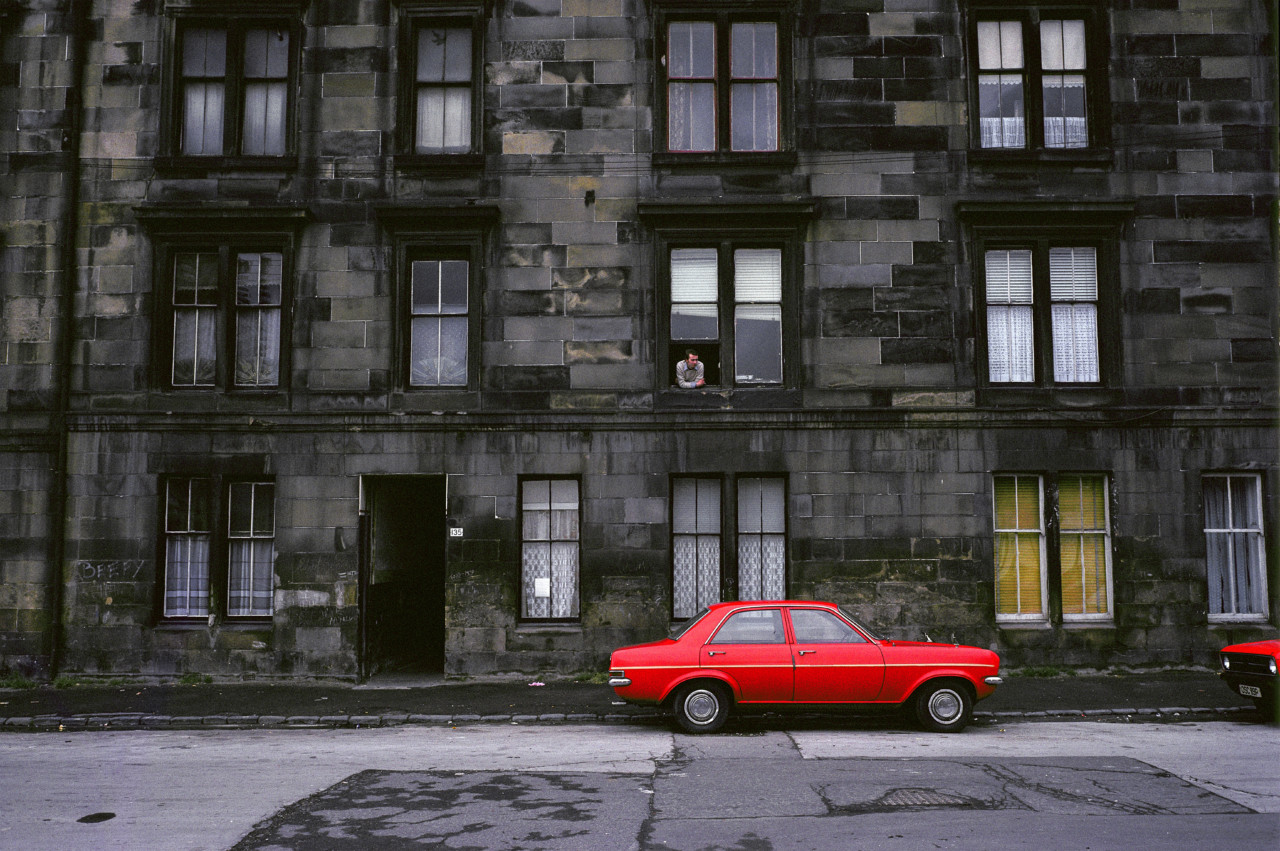 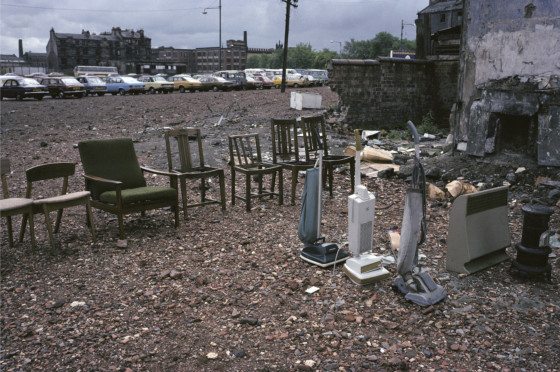 These are the cityscapes and the localities that Depardon has captured so brilliantly and evocatively. And yet it’s important to say that it is only one side of the city of Glasgow.  There are whole streets and blocks of spectacular Victorian architecture, leafy suburbs of large beautiful houses, vast parks that are the rival of London’s open spaces, imposing vistas – Glasgow is hilly – and civic buildings and churches of international renown.

Ian Nairn (1930-1983) is one of the greatest British writers on architecture and the urban landscape. He visited Glasgow for the first time in 1960 and had this to say: “Glasgow was a shock to me… I found what is without doubt the most friendly of Britain’s big cities and probably the most dignified and coherent as well. In looks it is much more like the best part of American cities – Boston or Philadelphia – than anywhere in England.”  Even when Nairn contemplated Glasgow’s most famous slum – the Gorbals – he was impressed: “It is laid out on a grid, with immensely dignified four-storey, stone-built terraces… in other circumstances it would be applauded as a splendid piece of urban design.” 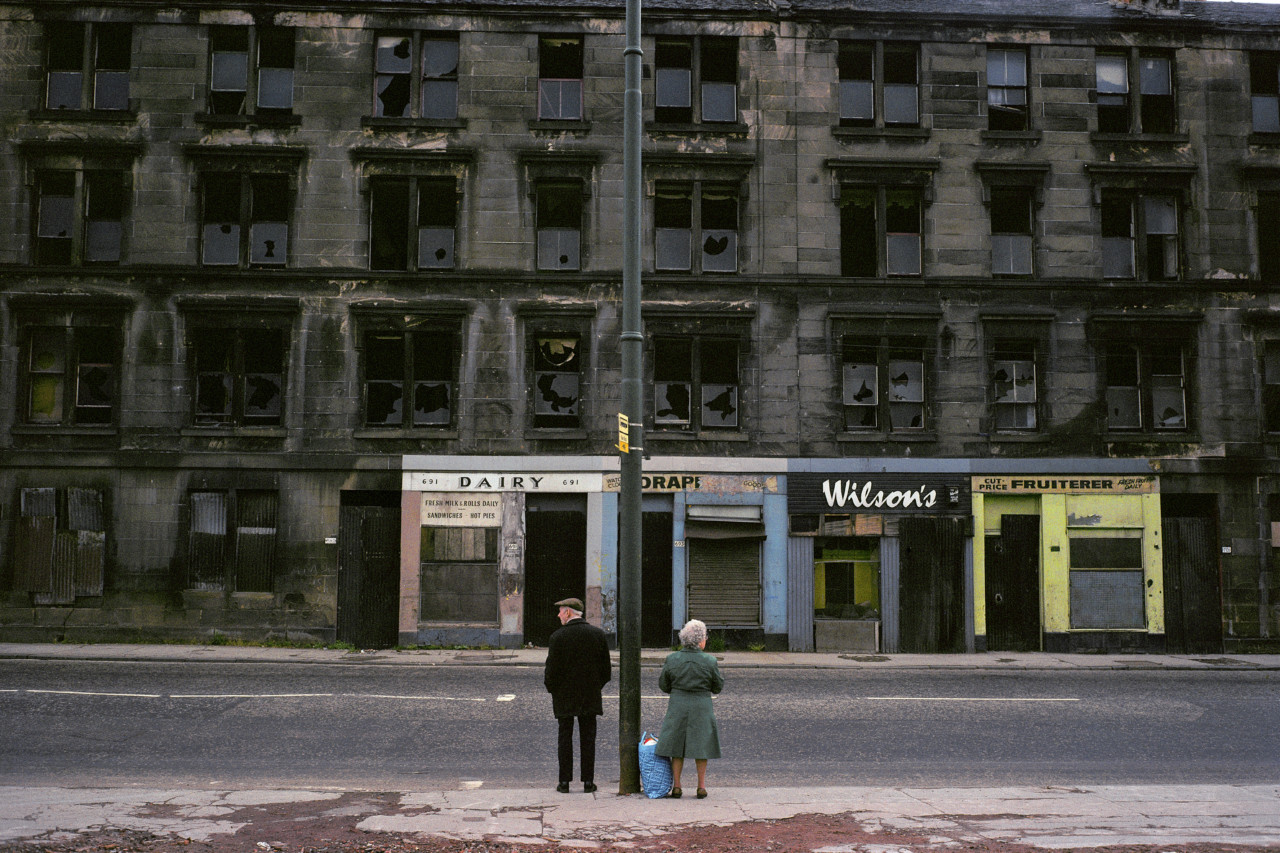 "I would imagine that these Depardon street views would seem almost surreal: the long vistas, the exaggerated perspective, the big skies, the diminution of the human in the context of the larger frame" 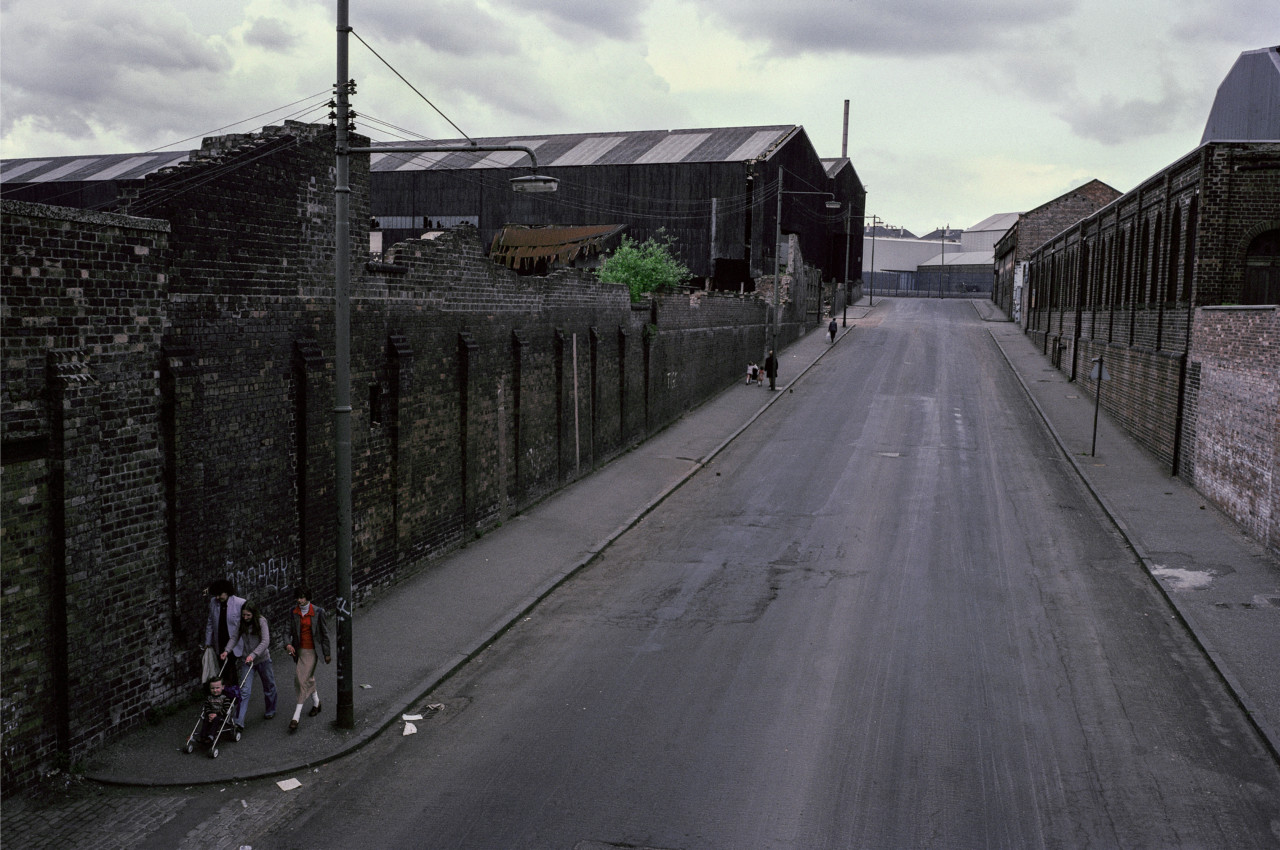 Glasgow’s slums are the focus for Raymond Depardon’s photographs. I recognise areas of Govan (by the river Clyde with the huge cranes of the now defunct shipyards in the background) and Maryhill, also very deprived.  What is initially so striking about the photographs is the architecture. Depardon captures the long perspectives – the tall tenements set in their wide streets — and these form the backdrop to the human drama in the foreground: a mother pushing a pram across the road, a drunk comatose in a shop doorway, a child on a bicycle, a little boy blowing an incandescent pink bubble of gum on the edge of the photograph’s frame.  I wonder if it was the very strangeness of these juxtapositions that drew Depardon to Glasgow: urban deprivation contrasted with what Nairn calls “one of the best examples in architecture of completely fulfilled promise.” Impressive grandeur confronted with the bleak desperation at the centre of the human condition. If I’m right then I think that this gives us a clue to what makes these photographs so memorable. I don’t think that Depardon was interested in being a “street photographer” in Glasgow – in the manner of Brassai or Weegee or Vivian Maier — even though there are certain images that show us how the underclass lives and how forlorn their existence must be.  As I look at these photographs what seems to determine the image is more an idea of composition rather than social reportage — an idea of pictorial structure rather than demotic documentary detail. Of course, they reflect a place and a time but, even though they are in colour, the Glasgow light – its tarnished humidity, its grisaille – gives the photographs something of the timelessness that monochrome bestows. 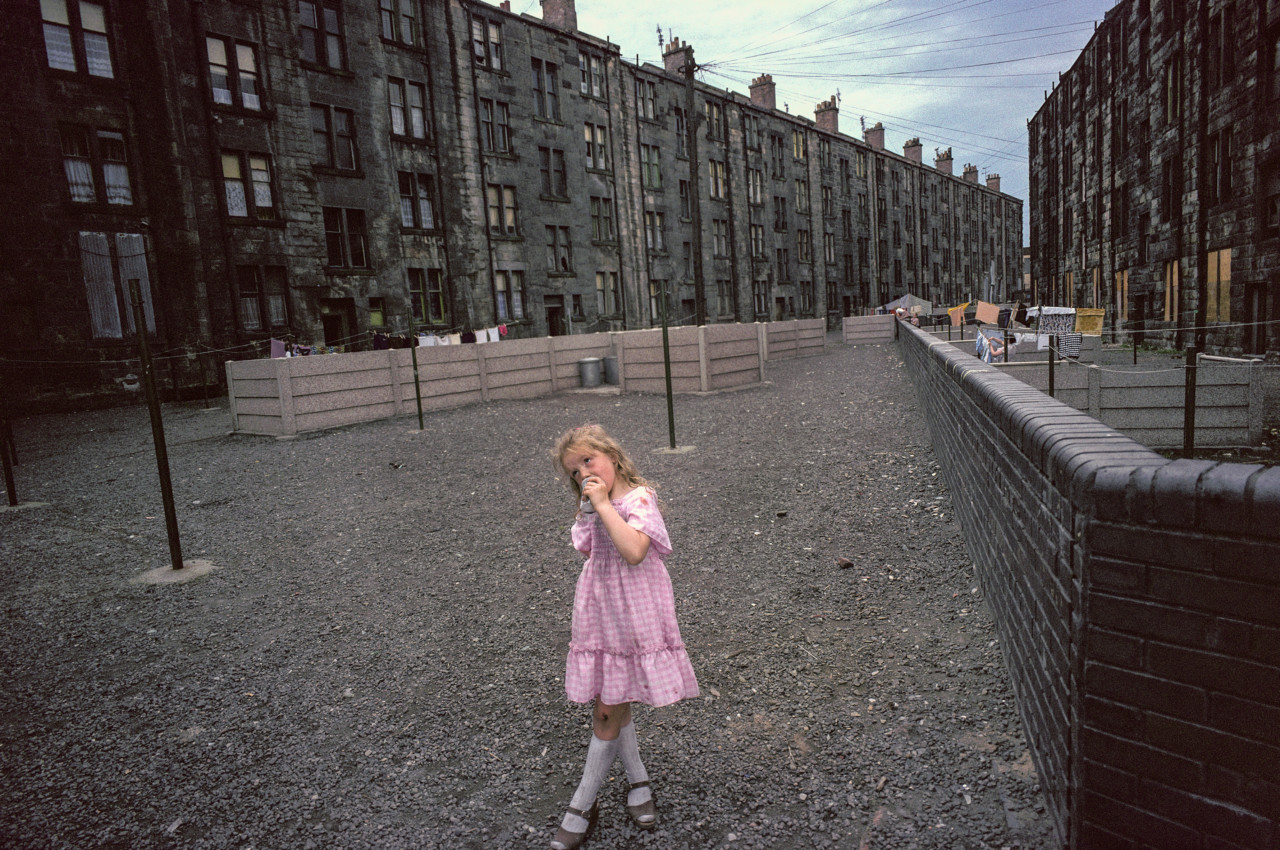 "Even though they are in colour, the Glasgow light – its tarnished humidity, its grisaille– gives the photographs something of the timelessness that monochrome bestows" 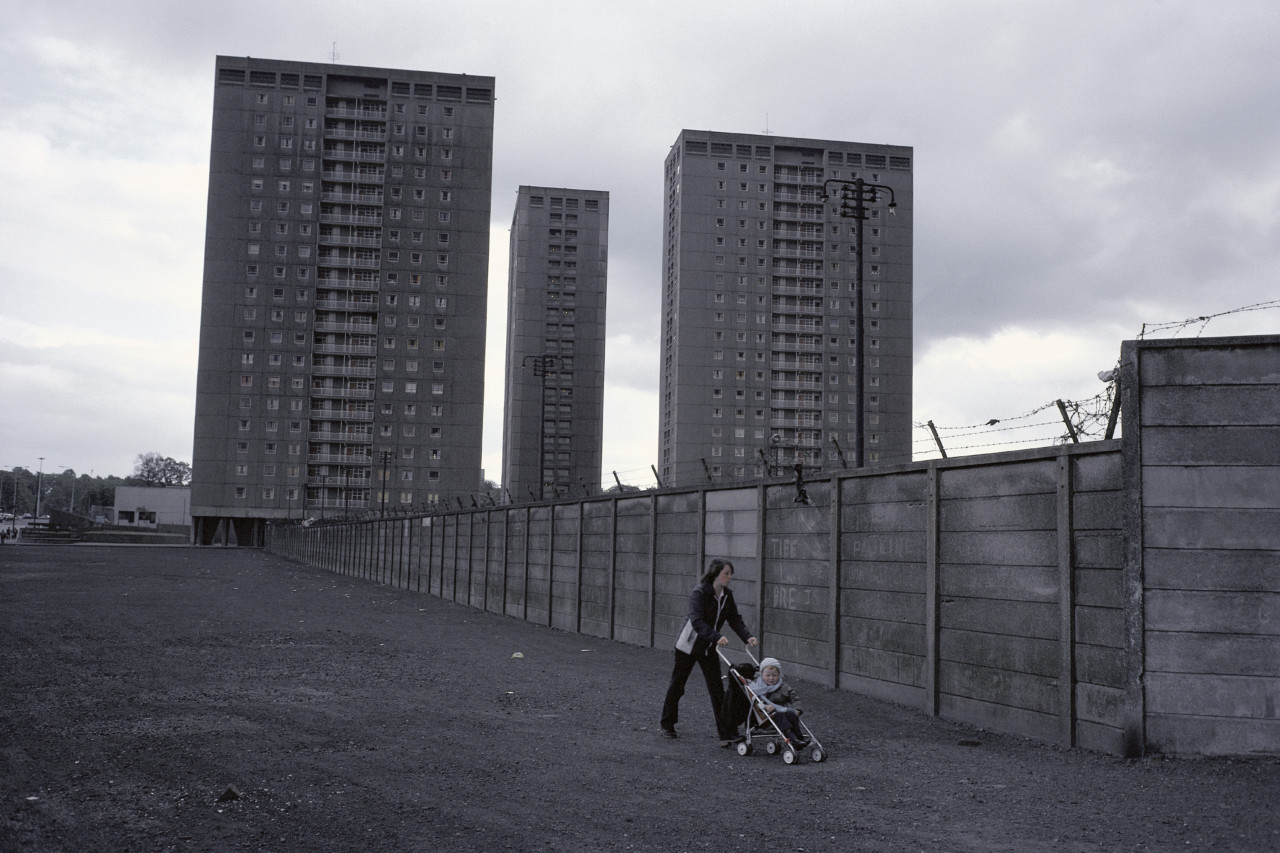 Conceivably, my familiarity with the city is a potential disadvantage when I consider Depardon’s photographs – I know it too well – so it requires something of a thought-experiment to try and imagine what these urban images look like to someone who has never been to Glasgow, who knows nothing of its “look” or its reputation. I would imagine that these Depardon street views would seem almost surreal: the long vistas, the exaggerated perspective, the big skies, the diminution of the human in the context of the larger frame. These images of Govan and Maryhill take on some of the aspects of the background city streets in the paintings of Giorgio Di Chirico or Paul Delvaux.  And, indeed, mentioning Delvaux reminds me of the English novelist J.G.Ballard – another connoisseur of the dystopian city. Ballard was very inspired by Delvaux and I think any reader of Ballard would see in Depardon’s images of Glasgow a rendition of the classic Ballardian tropes of alienation, of the modern city’s heartlessness, its aloof unconcern for its inhabitants.

All this artistic and literary comparison and speculation and allusion is a way of paying tribute to the real potency of Raymond Depardon’s photographs. These are great photographs of a city and its people – regardless of the time they were taken. Glasgow is the subject but in a way the city in these photographs is at a strange remove from the actual city on the banks of the River Clyde. However, all great photographs have the capacity to make you look at the world anew, as if the view through someone else’s lens reinvigorates what your eyes can see — but may be missing. 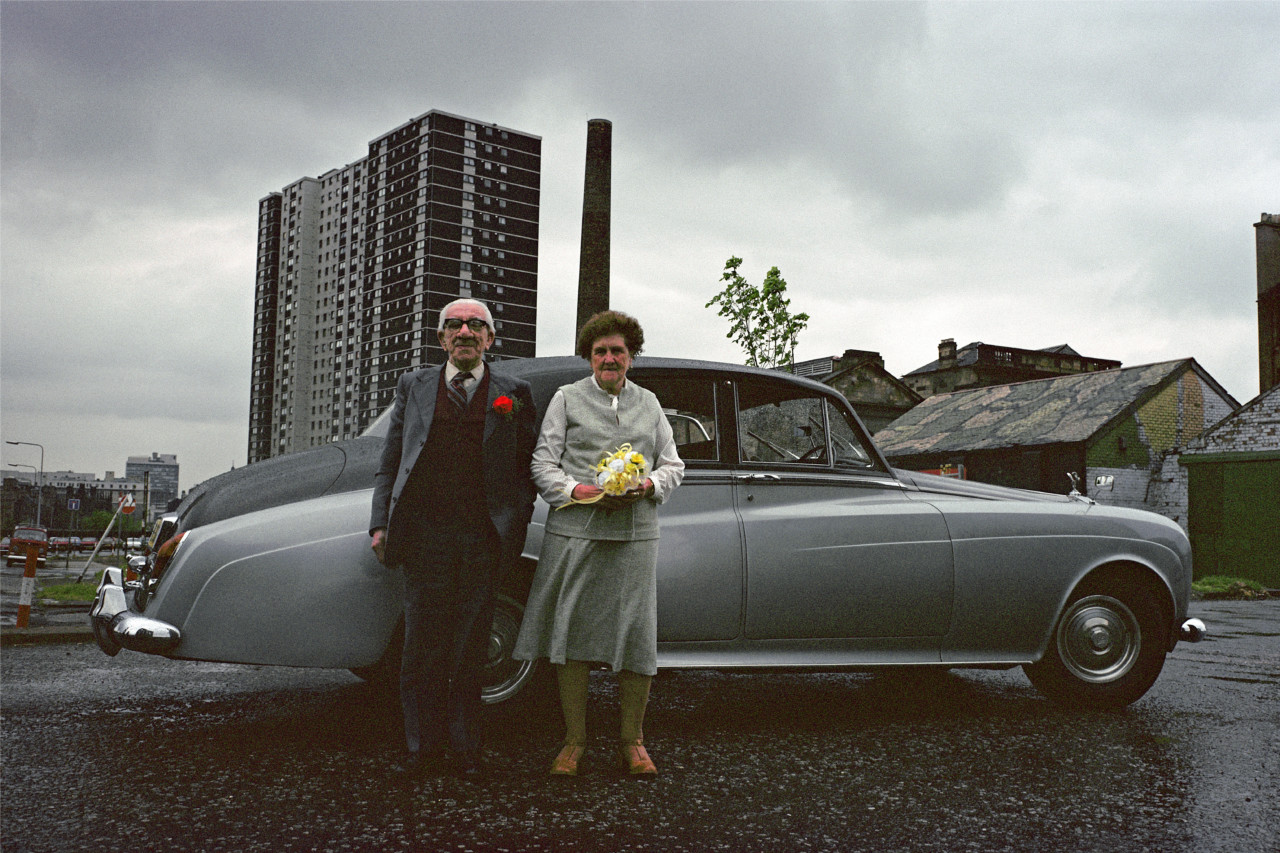 "I wonder if it was the very strangeness of these juxtapositions that drew Depardon to Glasgow: urban deprivation contrasted with what Nairn calls “one of the best examples in architecture of completely fulfilled promise.”" 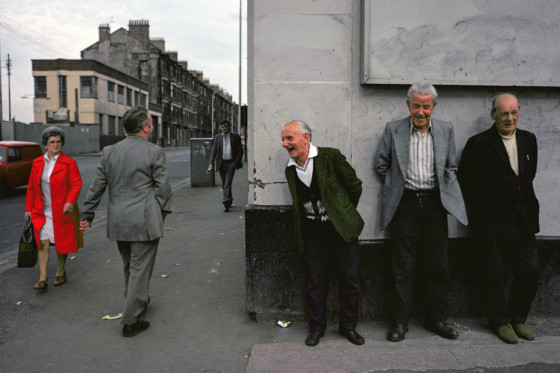 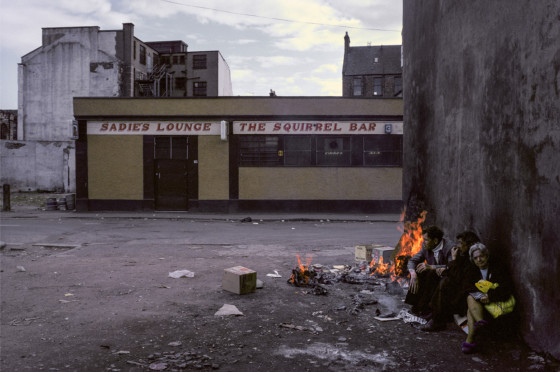 As it happens I had been looking at Depardon’s photographs before I returned to Glasgow two weeks ago. The city is largely transformed today from the one that Depardon photographed in the early 1980s, let alone the one that Ian Nairn wrote about in the 1960s. The abandoned wharves, shipyards and warehouses of the riverside – Glasgow’s imperial industrial heartland and the source of its wealth — are now landscaped parks of condominiums and gated communities and vast silvered monoliths of modernist architecture: new bridges, exhibition and conference centres, arenas.  And yet, you can turn a corner and this new 21stcity disappears and in its place are the wide rainwashed streets of an older Glasgow, the sandstone tenement blocks standing tall against the cloud-littered sky. It seems like a vision – as if the 19thcentury has somehow returned. Raymond Depardon’s Glasgow still lives on.

Boyd’s new novel, Love is Blind, is out now.