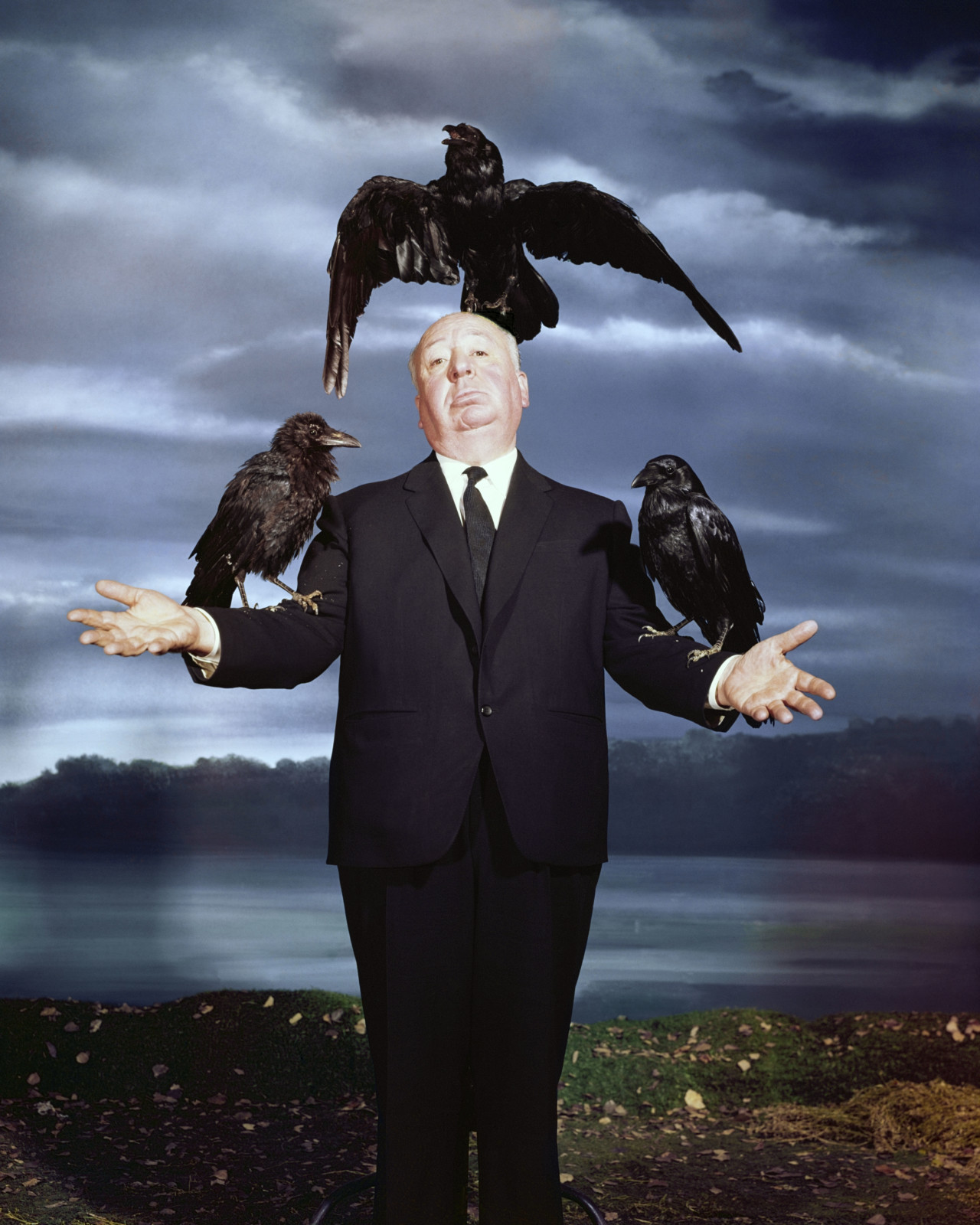 There are several key devices that a film must employ in order for it to be considered ‘Hitchcockian’ – so-called due for displaying influences from the style of filmmaking pioneered by British director Alfred Hitchcock, who would be 120 today. These techniques include: creating a sense of doom through dark, moody weather; tension building toward to a threatening crescendo; mystery; and often a cool platinum-blonde character.

Magnum photographer Philippe Halsman had a knack for collaborating with artists to create work that both showcased and riffed on their own creative practices – see his work with Andy Warhol, Salvador Dali, Jean Cocteau or Vladimir Nabokov, for example.

You can explore a collection of posters, contact sheets and fine prints by Halsman — including his photographs from the production of Hitchcock’s films — on the Magnum Shop here. 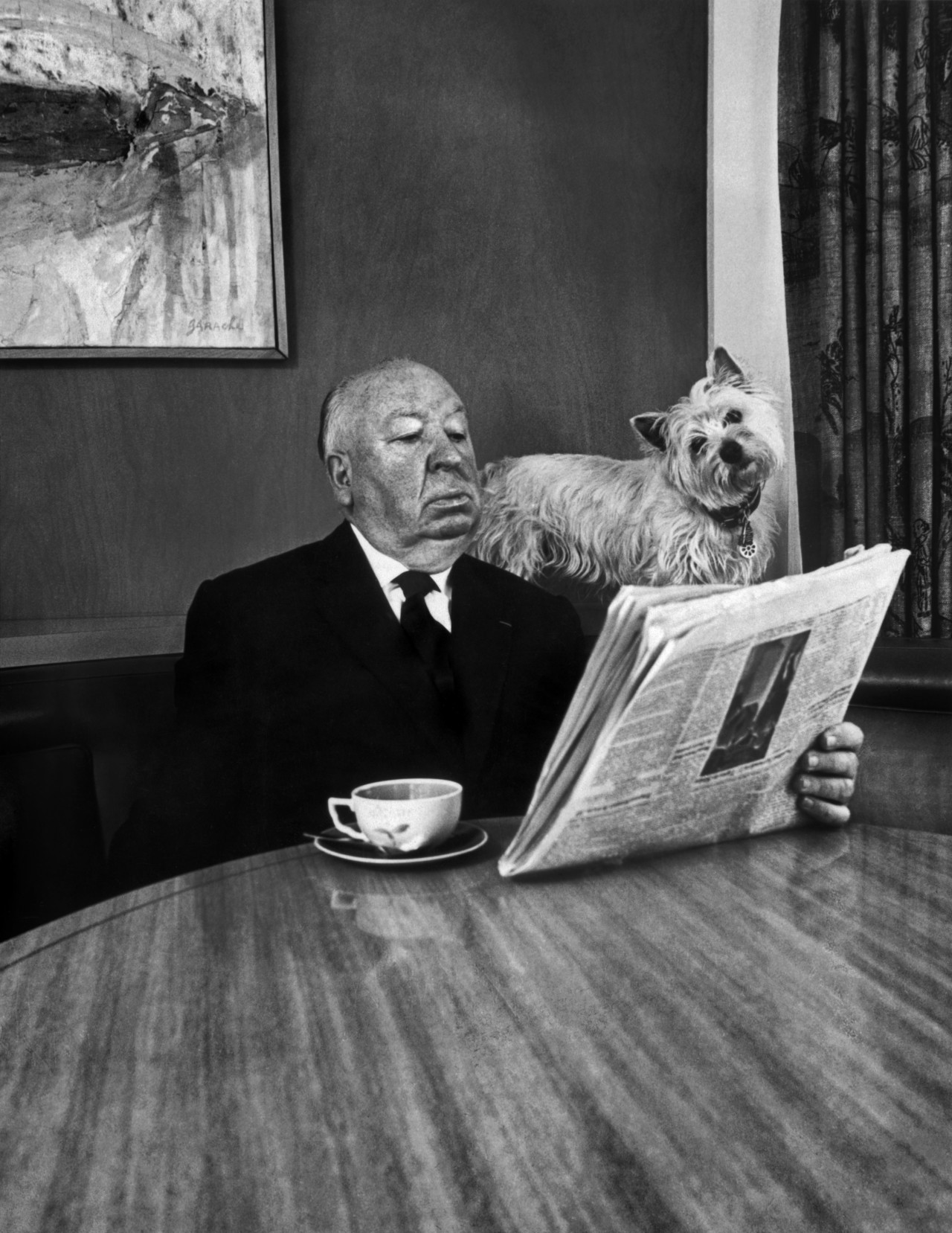 Halsman met with and photographed Hitchcock over several years, at his home and on set, creating portraits that tapped into his macabre vision, all with a typical halsman twist of fun. Hitchcock’s wife Alma opens her the fridge door to find a model of her husband’s head amongst her leftovers (1974), and actress Tippi Hedren gets a light for her cigarette from an obliging raven.

The latter was taken on the set of “The Birds” (1963), widely considered to be a classic of cinema that witnesses violent and random. Below, Halsman’s text recounts his experiences working on the set and revisiting the director at home years later. 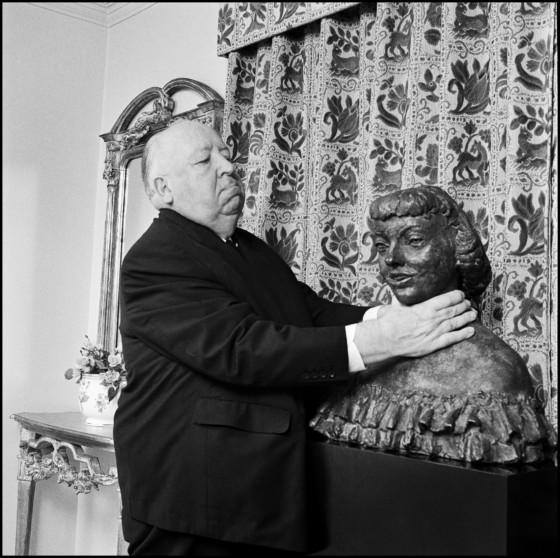 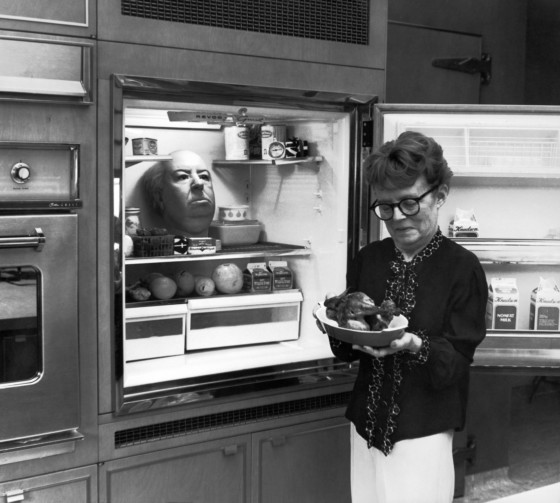 Hitchcock’s publicity agent had commissioned me to come to Hollywood for ten days to photograph everything that I deemed to be of interest in the making of the movie The Birds. Subsequently, I was to try to have my pictures published by the major magazines.

I soon found myself at Universal Studios, in the middle of an enormous sound stage filled with ravens and sea gulls. I saw Hitchcock turn to the camera and say, “I think we have enough of these flight takes already. What we need now is a take of sea gull, flying away from the camera, then turning around and flying back to attack again.” 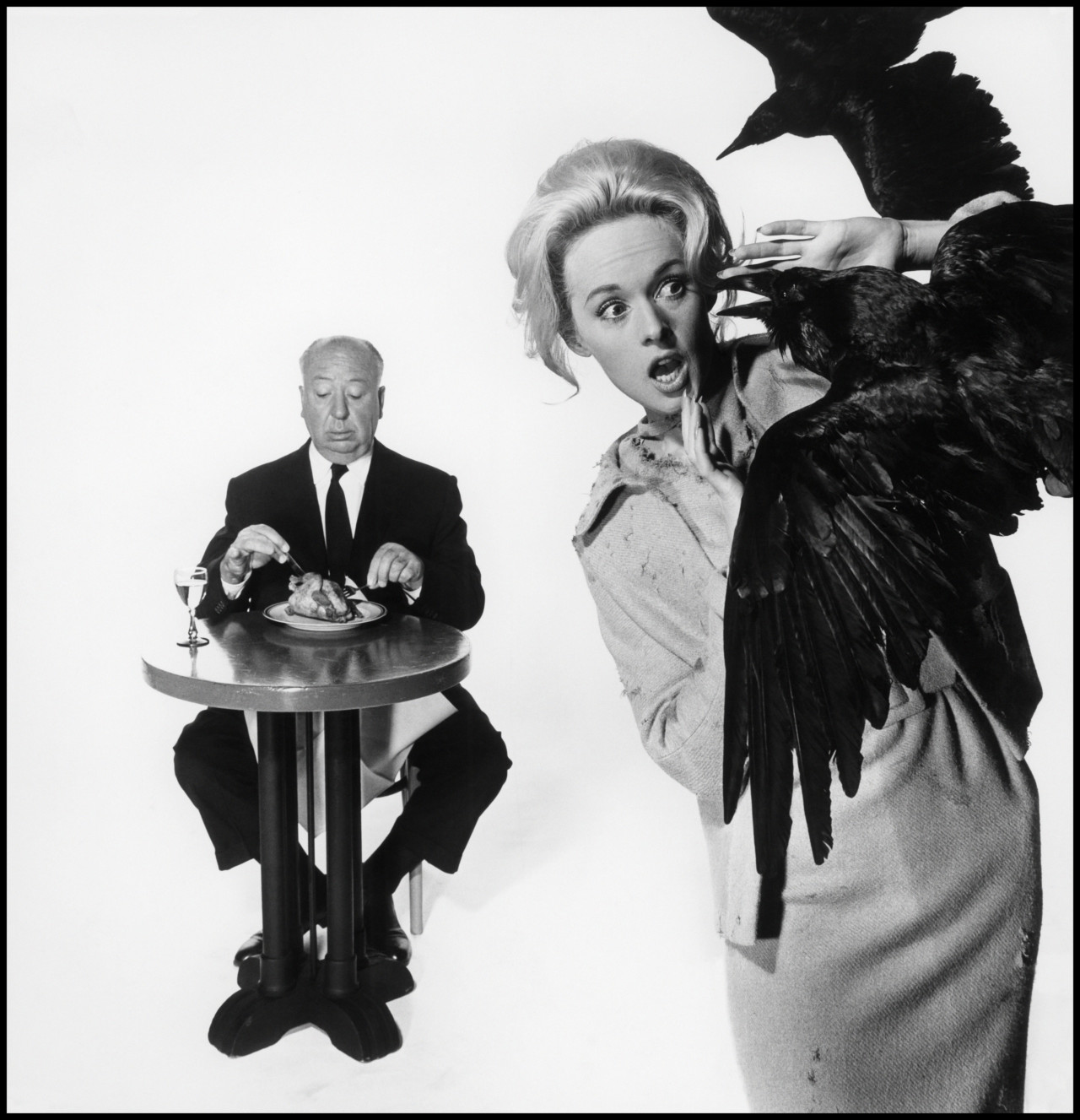 “This is impossible, Mr. Hitchcock,” answered the cameraman. “You know that one cannot train these damned sea gulls.”

“This take is very important,” Hitchcock answered. “I don’t care how you do it, but I must have it.”

Then he turned to me: “A bird that suddenly attacks a person is not frightening per se. It can be a single incident or just a crazy bird. But when the bird, after attacking a person, flies away and then turns around to attack again – that is frightening. It is no longer an incident, but a kind of a declaration of war. For the first time the spectators will feel a cold shiver running down their spines.” 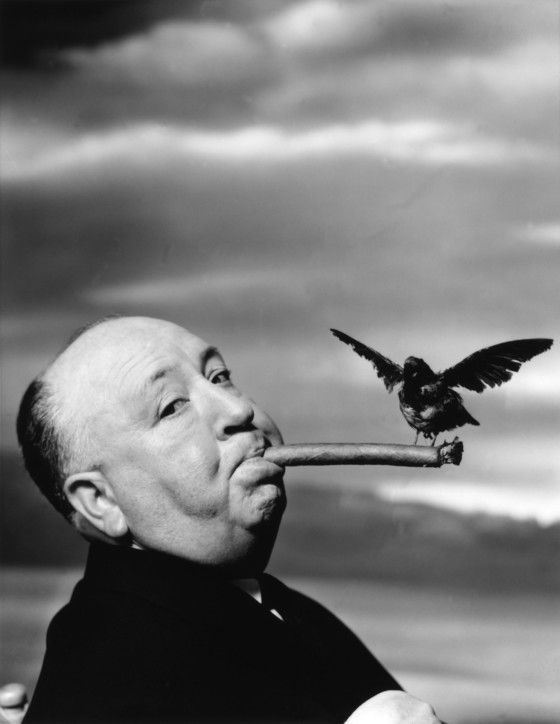 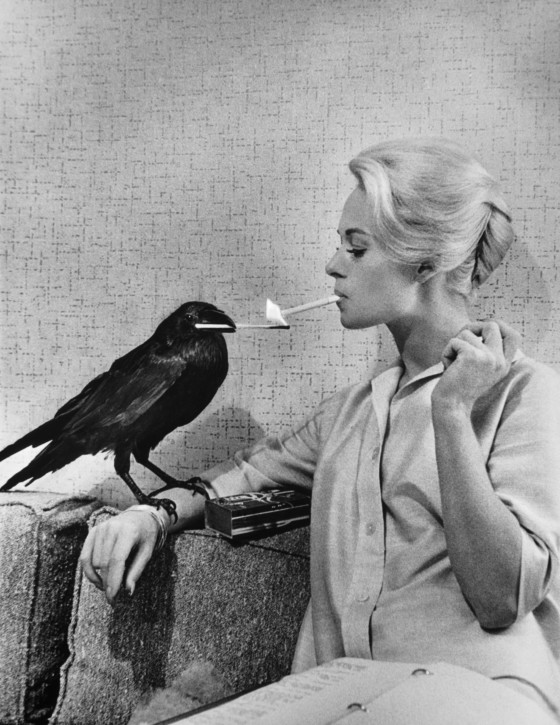 "The public does not realize that in selecting the sequence of images, I play on the nerves of the audience like a musician playing the organ" 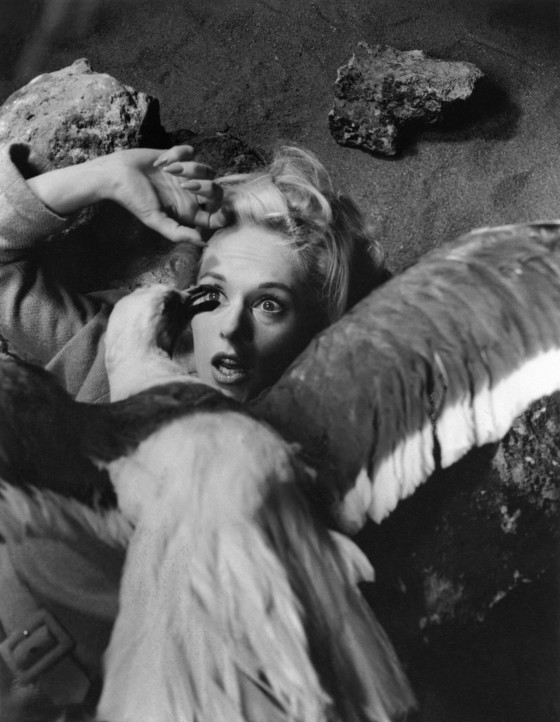 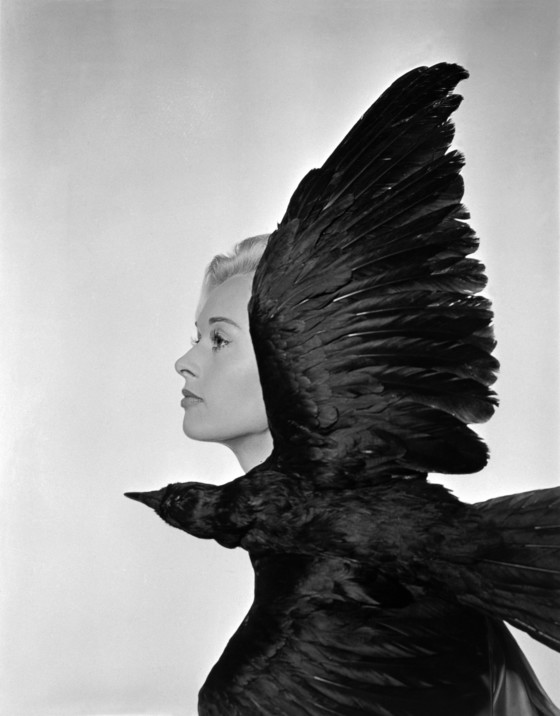 Hitchcock left the bird gallery and started walking toward his office. I followed him. “You see, Philippe,” he continued, “the public believes that it is the actors who create suspense and emotions in a movie. The public does not realize that in selecting the sequence of images, I play on the nerves of the audience like a musician playing the organ. Do you remember Psycho? I never showed the actual murder. I showed only details, like the blood that trickles, the hand that suddenly gets limp, and so forth. For forty-five seconds of film footage I showed a sequence of seventy different camera takes. I took seven days to film the forty-five seconds. But it was much stronger than if I had shown the actual murder. The art of movie directing is the art of manipulating the emotions of an audience.” He bid me goodbye and entered his office. 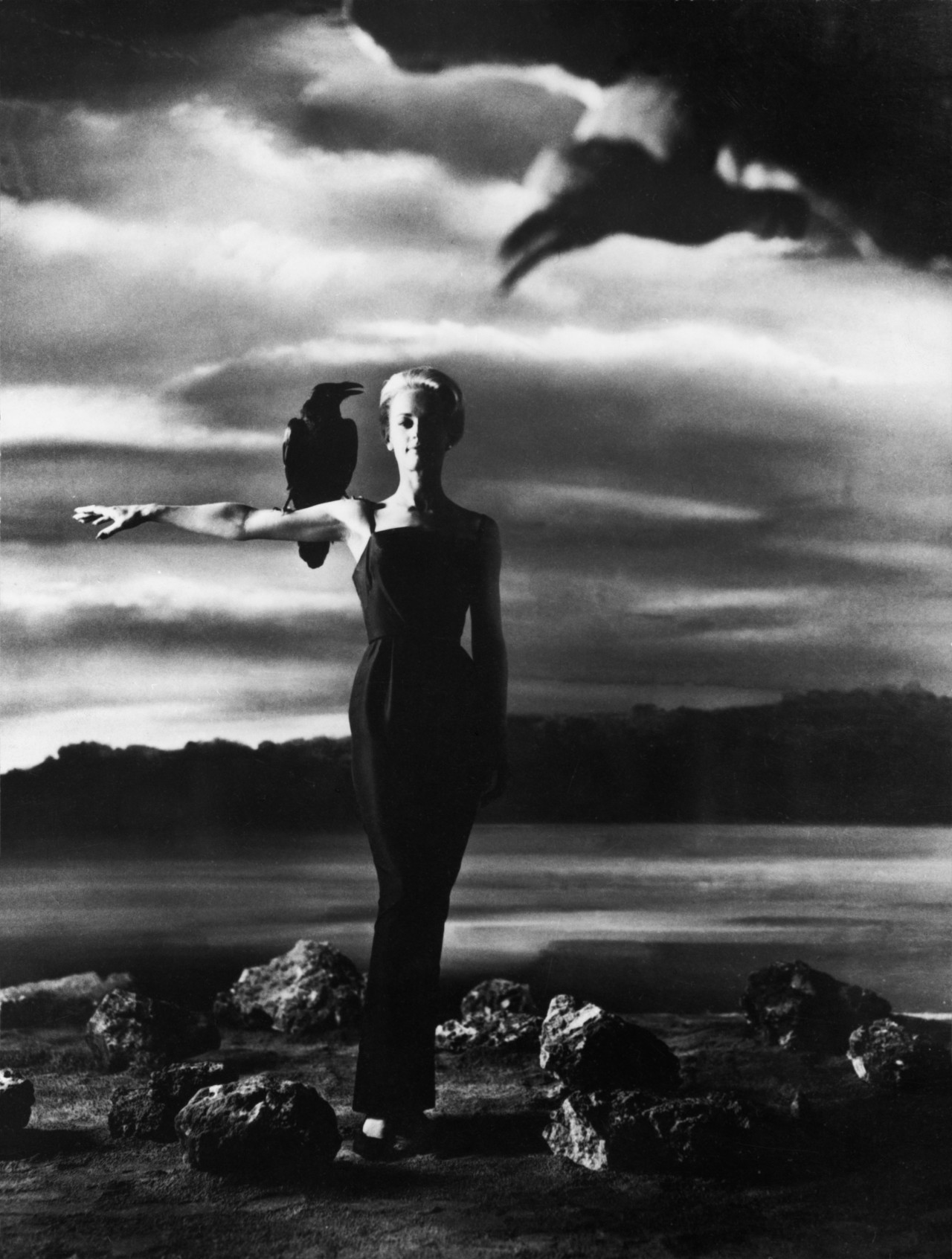 For twelve years I did not hear from Hitchcock. Then one day the art director of Vogue of Paris phoned and asked me if I was available to photograph Mr. and Mrs. Hitchcock in their home.

I hadn’t worked for the French edition of Vogue since coming to America, and I asked with some astonishment, “Why have you selected me?” “It was Hitchcock who wanted to be photographed by you,” was the answer.

The last twelve years had changed Hitchcock less than me. His double chin had become an even more substantial part of his anatomy and his face even more impassive and monolithic. Mrs. Hitchcock, whom we met for the first time, was tiny, vivacious, and surprisingly young-looking. 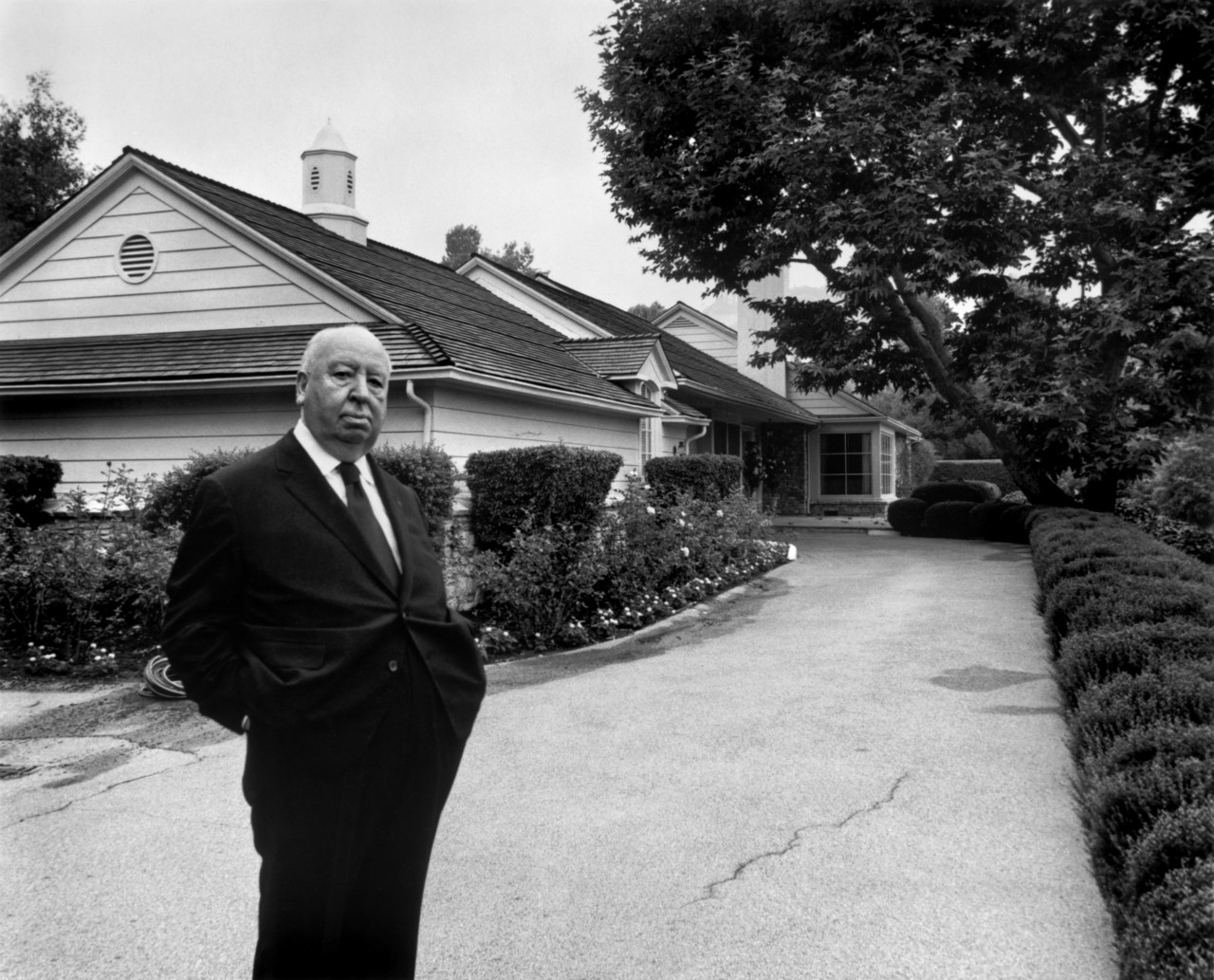 The Hitchcocks proceeded to give us the grand tour. After the tour I discussed the photographs I planned to take.

During the next two days I photographed him in different rooms in the house. I was particularly impressed by a room which Hitchcock called his “wine cellar,” which was filled with wine racks and kept by air conditioners at the constant temperature of 58 degrees Fahrenheit. The racks were filled with bottles, featuring labels of the most illustrious French wines and the most fabulous vintages. 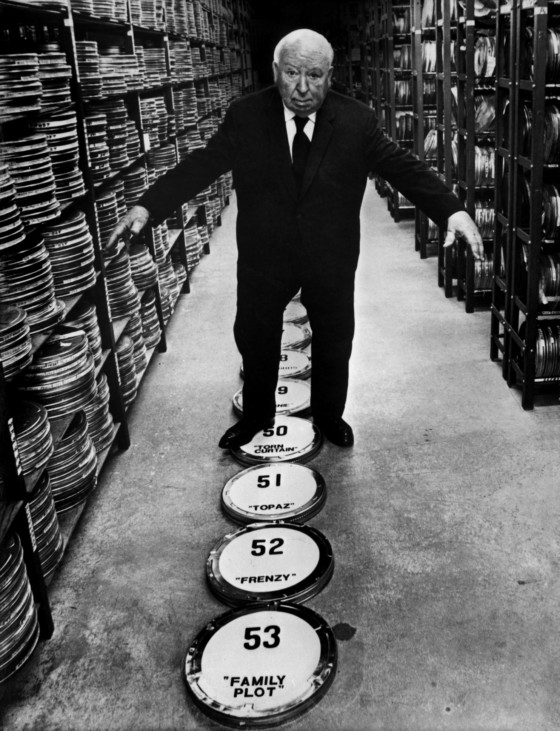 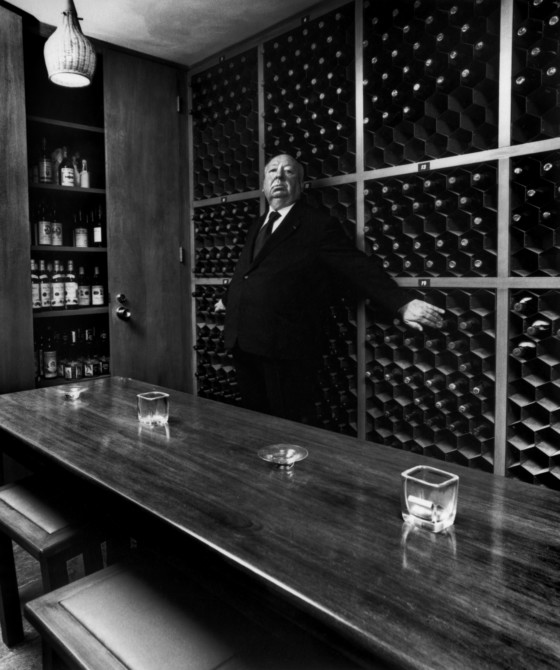 I asked Hitchcock on what type of occasion he would drink his fabulous wines. “Probably when you have guests to dinner?” I ventured.

“No,” Hitchcock answered sadly, “I drink them very rarely. Most of my guests don’t know the different between an exquisite French wine and the most ordinary domestic wine which comes in gallon jugs. It would be useless to waste a rare wine on them.”

“So what do you do with this fortune in wines?” I asked.

Hitchcock sighed. “I have a few friends who are connoisseurs. They appreciate when from time to time I send then a present.” 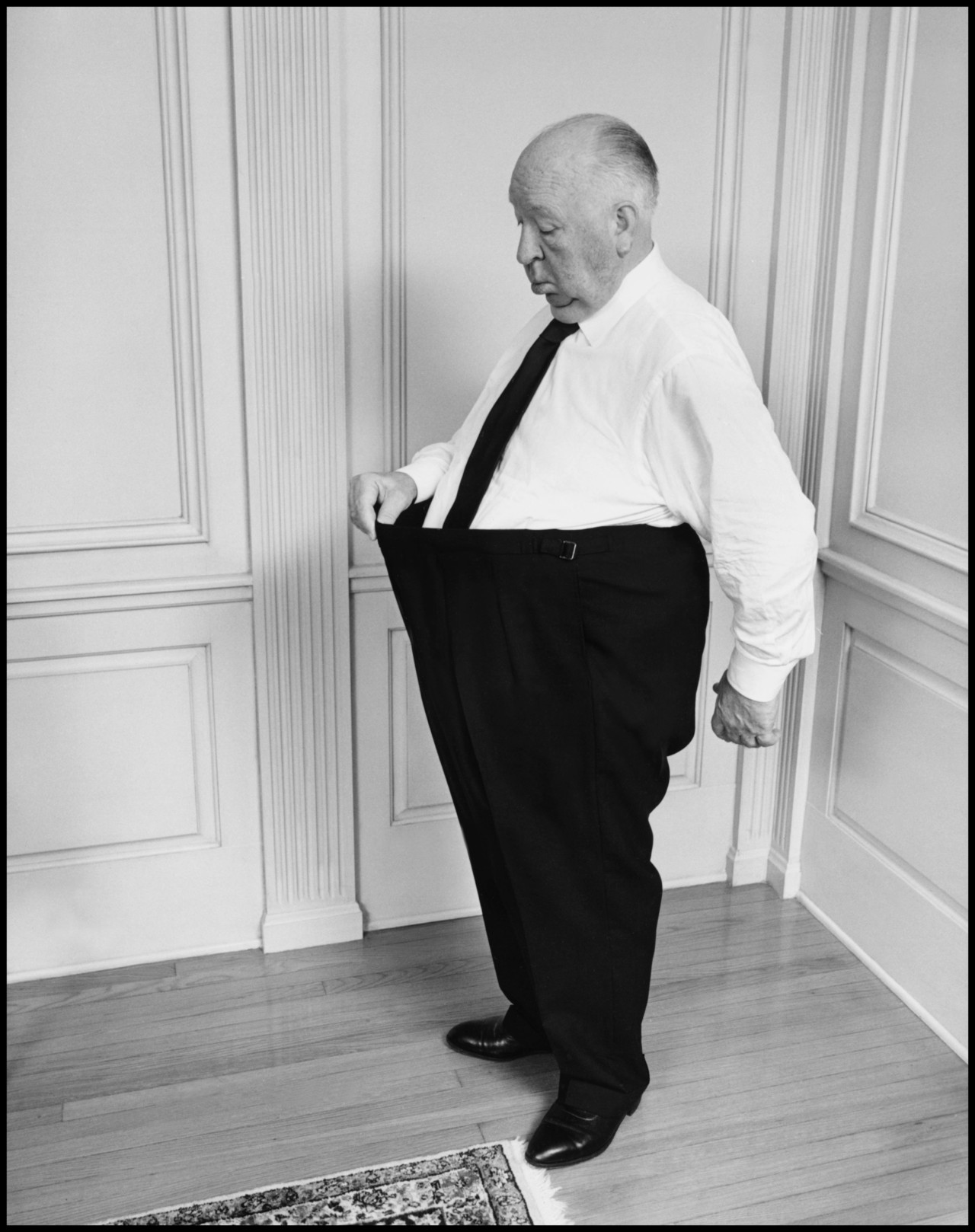 To change the obviously painful subject I mentioned that a few of his old movies were being shown in New York, and how excitedly the young people were reacting to them. “Other directors need stars to attract the public, but in your case the name of the director is sufficient.”

“Yes,” Hitchcock agreed, “and in every country I go people recognize me. We were in Tokyo recently, and in the middle of the Ginza, Japanese were stopping me and asking me for autographs. There is only one country where I can walk in complete anonymity. You will never guess which.”

“In England, probably,” I said.

Hitchcock looked at me with surprise. “You are absolutely right. I can walk in London in the middle of Bond or Regent Street and nobody will stop to look at me.” 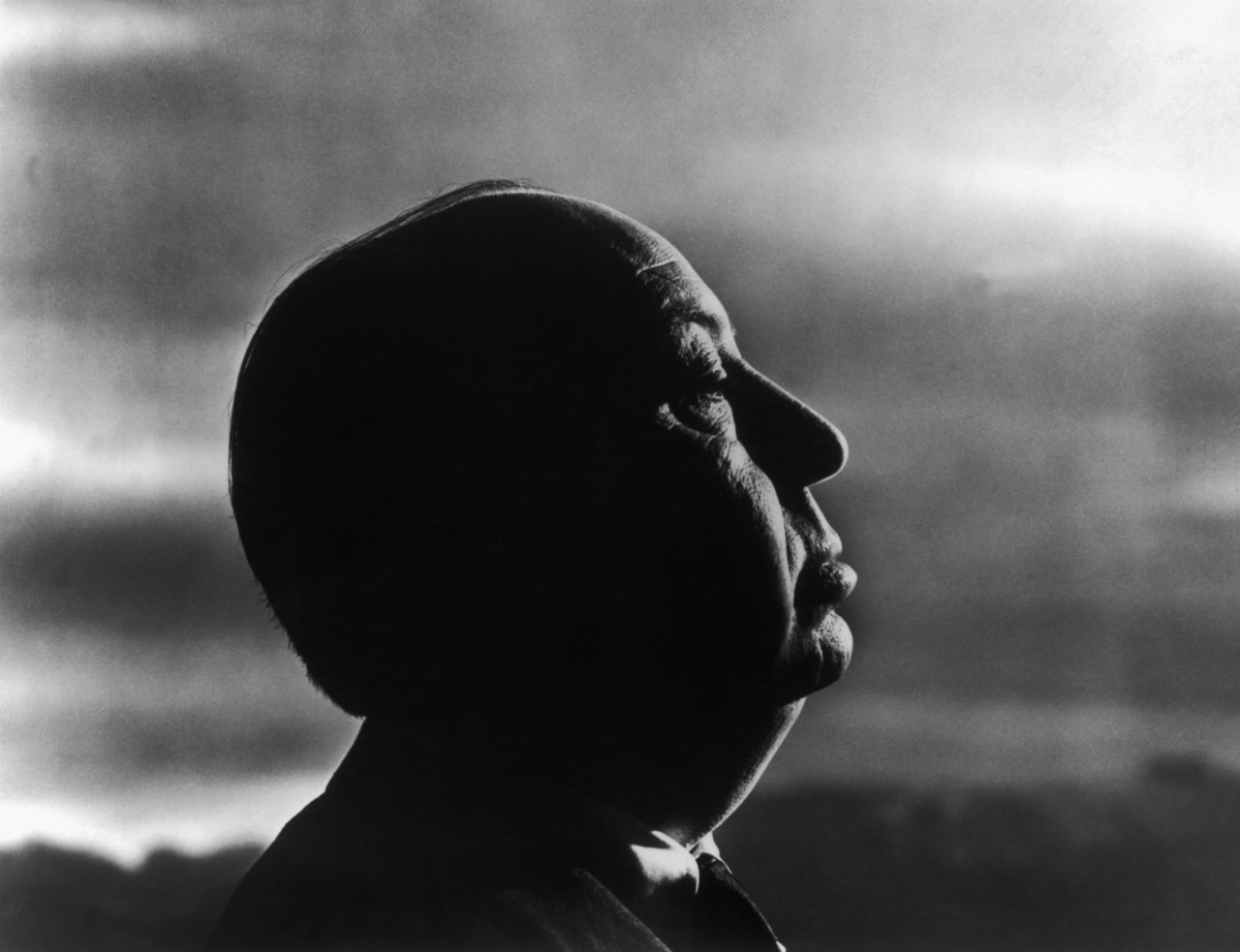