The below image, by Burt Glinn, is now available – for the first time ever – as a limited edition 8×10″ Magnum stamped print. You can see all images available in this new collection here, and learn more about the 8X10″ Magnum Editions prints here, on the Magnum Shop.

Andy Warhol wasn’t camera shy, he just thrived to a greater extent behind the lens, shoving his camera in the faces of his “Superstars” when they were indisposed, craving his attention or acting out. Like his “wife”, the tape recorder he all but slept next to, he carried his Minox 35EL camera everywhere since he purchased it in 1976. “Having a few rolls of film to develop gives me a good reason to get up in the morning,” he famously said. It was a tool he used to refract attention onto the Glamorosi that oscillated about his star. Except when he turned his Polaroid on himself in drag. 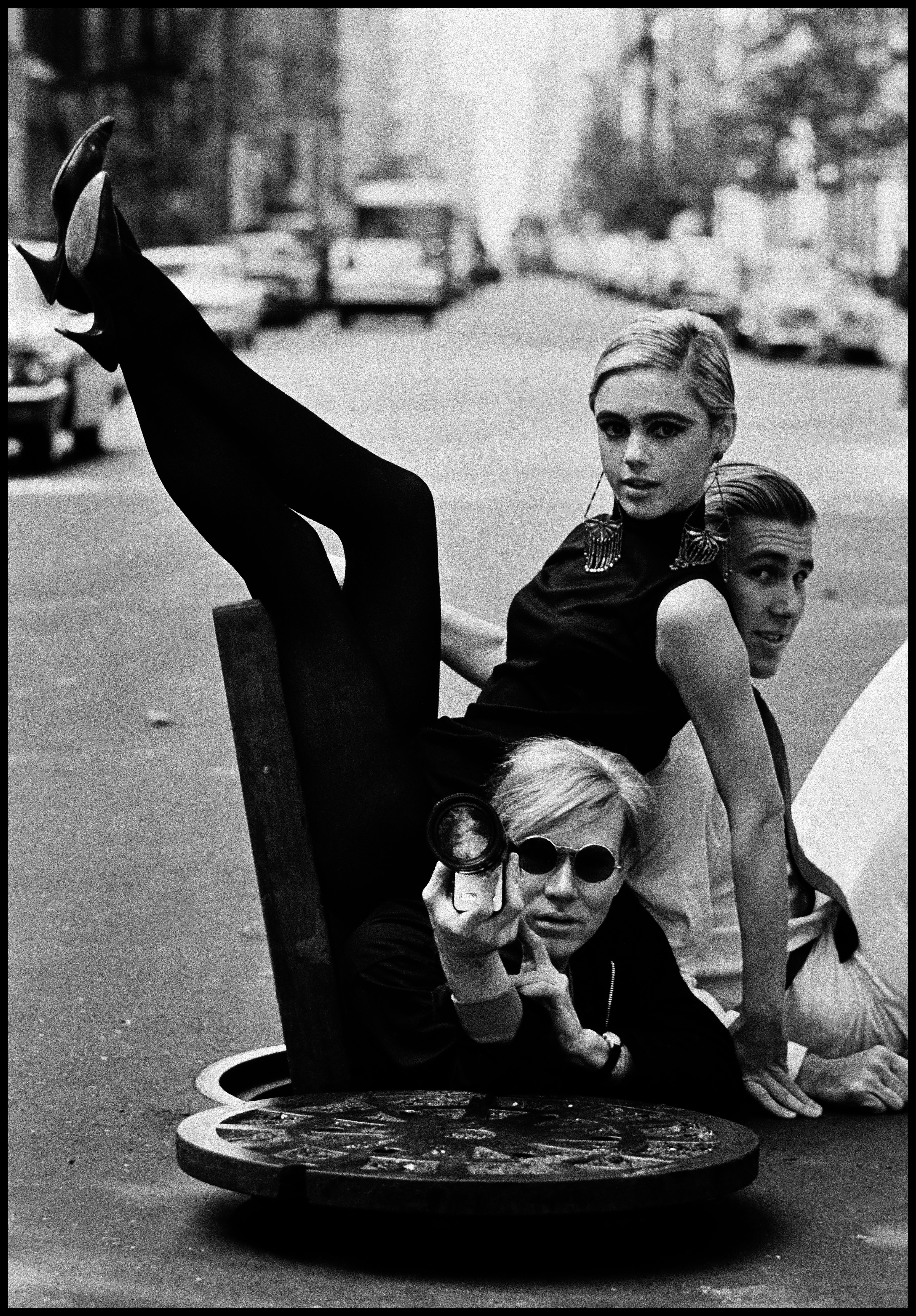 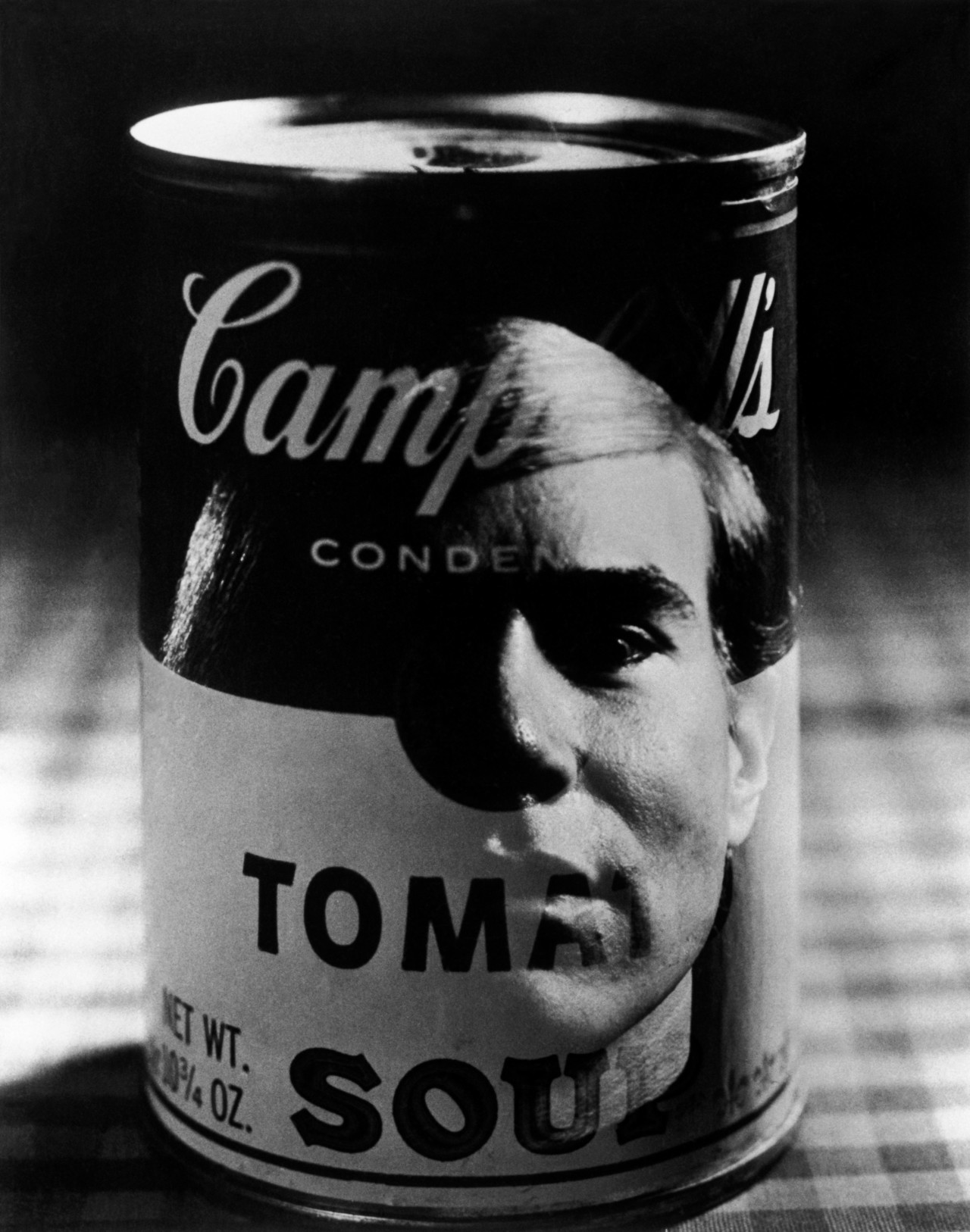 Warhol was no camera-seeking Clara Bow, however. To look at photos of Warhol taken by other professional photographers is to see past the façade he erected and into the deeper social unease that plagued him. American photographer and artist Christopher Makos and photographer Robin Platzer would capture Warhol partying at Studio 54, grinning sheepishly in the background as some drama he had conjured played out between friends. Once, at the opening night party for Broadway’s version of the Beatles’ Sgt. Pepper’s Lonely Hearts Club Band, he introduced trans rock’n’roller Jayne County to his dear friend Bianca Jagger.

“I looked like 15 Lady Bunnys and I had these huge plastic tits on with a see-through stripper’s top,” County told Interview. “Bianca looked at me and her eyeballs fell out and she got up and ran away […] But [Warhol] knew that was gonna freak her out, he did it on purpose.” Always carefully orchestrating the interactions of his hangers-on, one of the few times he was truly uncomfortable was when he was the one put on display. Ironic, since he made a career out of profiling celebrities in silkscreen. Warhol would joke like a drunk uncle when asked for a photograph at a function. At Studio 54 in 1977, photographers in attendance asked for a picture of him and Elton John together, “so I asked Elton if I could kiss him, but he didn’t answer me so I didn’t,” he wrote in The Andy Warhol Diaries. “Maybe he didn’t hear me. He was wearing a hat because of his hair transplant.” Artist Karen Bystedt photographed the pop artist in 1982, and remembers, most of all, his discomfort. She was an NYU student at the time, and cold-called the Interview magazine offices and scored a sitting with Warhol for a book she was working on, Not Just A Pretty Face.

"They’re all afraid to touch me"

“He had put on his own makeup. It was really bad,” recalls Bystedt. “He had caked it on, so I actually had to ask him if I could help him spread it around a little. First, he literally jumped back, because I don’t think people touched him, but I really wanted to make him look as good as possible. Then he said, ‘I wish everyone would do that because I wanna do those day jobs and hang out with all the beautiful models and get paid the day rates. Instead, they’re all afraid to touch me, and they just book me for half an hour and just shove me in the shot.’” 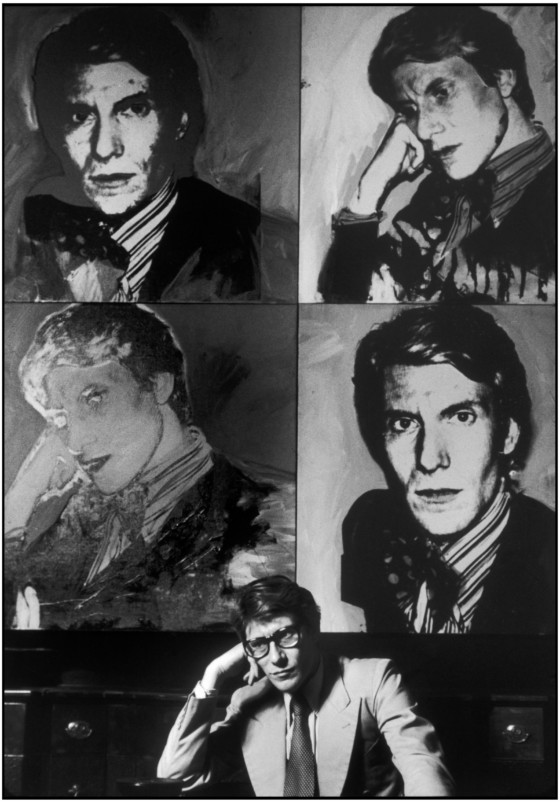 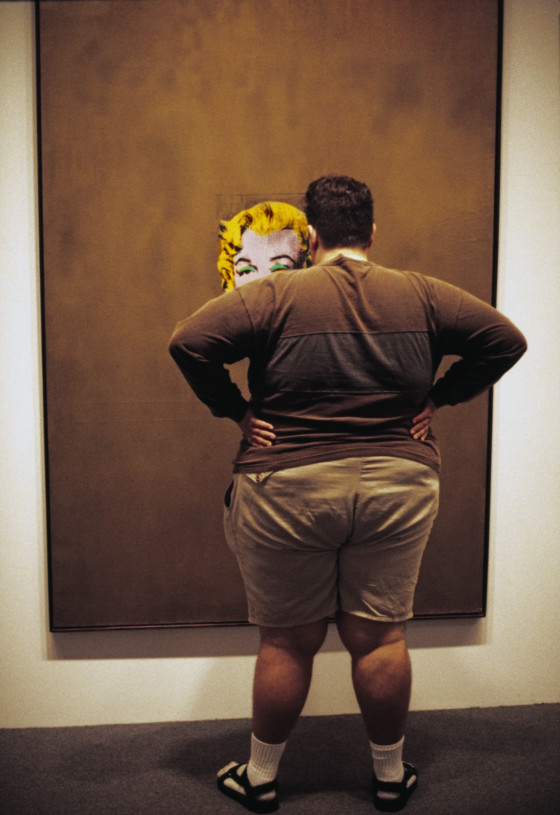 Yet it was others’ portraits of him that cut through the celebrity persona Warhol had crafted for himself and offered a sobering look at the man under the silver wig: Alice Neel painted him, pensive and topless; Richard Avedon documented the brutal disfigurement caused by Valerie Solanas’s pistol in 1986; Edward Wallowitch portrayed him softly, holding his head in his hands.

Eve Arnold, the first woman signed to Magnum’s roster in 1955, photographed Warhol at his Silver Factory in 1964. He was making the movie Harlot, the plot of which included it’s star, Mario Montez, eating bananas on a couch. When Warhol was made her subject, he suddenly had troubles working his first sound camera. Arnold had to help him find the power button. “I want to be recognised by the ‘smart world out there,’” Warhol told Arnold during their shoot. Positioned behind it, looking towards his movie set, Arnold’s photo of him is easily one of the most intimate images of the ubiquitous artist at work. Documentary photographer Elliott Erwitt, who joined Magnum in 1953, photographed Warhol in the back of a limo with Grace Jones. Andy Warhol and his daughter, Amy, were patiently waiting for Grace Jones to arrive. Erwitt didn’t know that, as Warhol would explain in The Andy Warhol Diaries, “two hours late usually timed it right for Grace.” It was 1986, and Erwitt was commissioned by a magazine to take a portrait of the two icons who were each other’s dates to Arnold Schwarzenegger’s wedding to Maria Shriver. It was again Warhol’s turn in front of the camera. “He was quite affable and patient because Grace Jones, who was to be photographed with him, was very late in showing up,” Erwitt remembers.

"I want to be recognised by the ‘smart’ world out there" Amy was acting as a stand-in, but the resulting portrait is more fascinating than the larger-than-life images of Warhol with Grace Jones. In those, she dominates the frame with her long brown trench and megawatt smile. Both are celebrities, Bunyanesque tokens of success, but with Amy, this tiny child, Warhol has long-distance eyes and a fast-money discomfort. 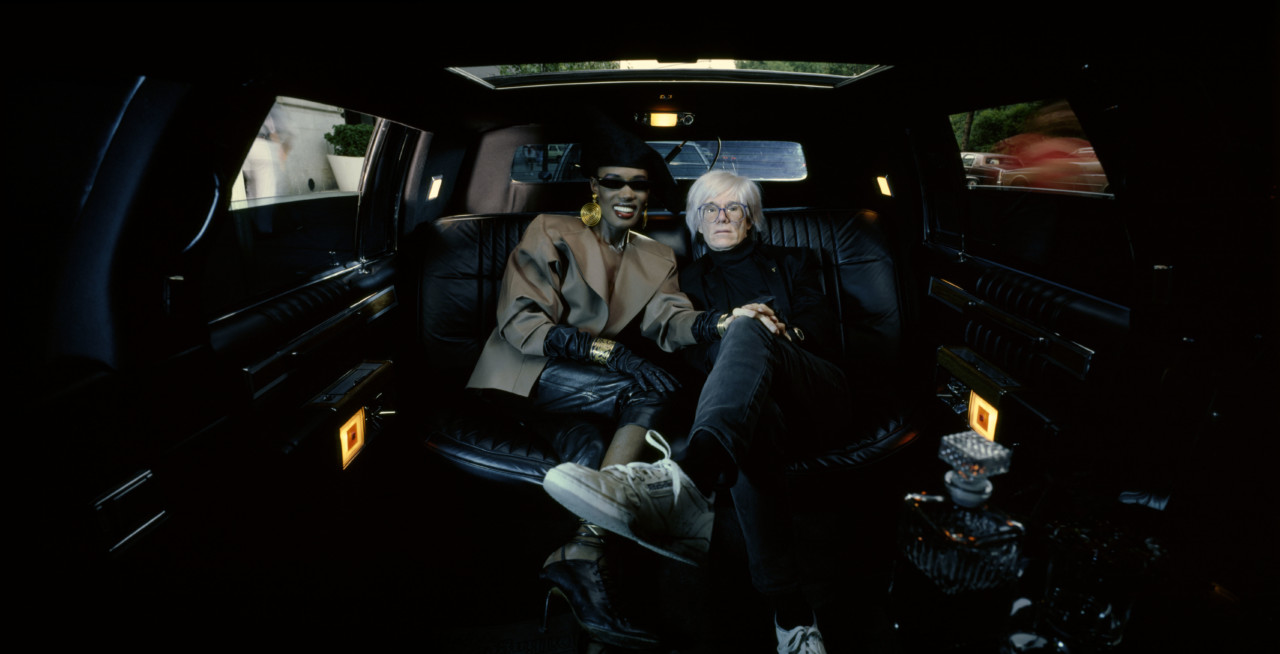 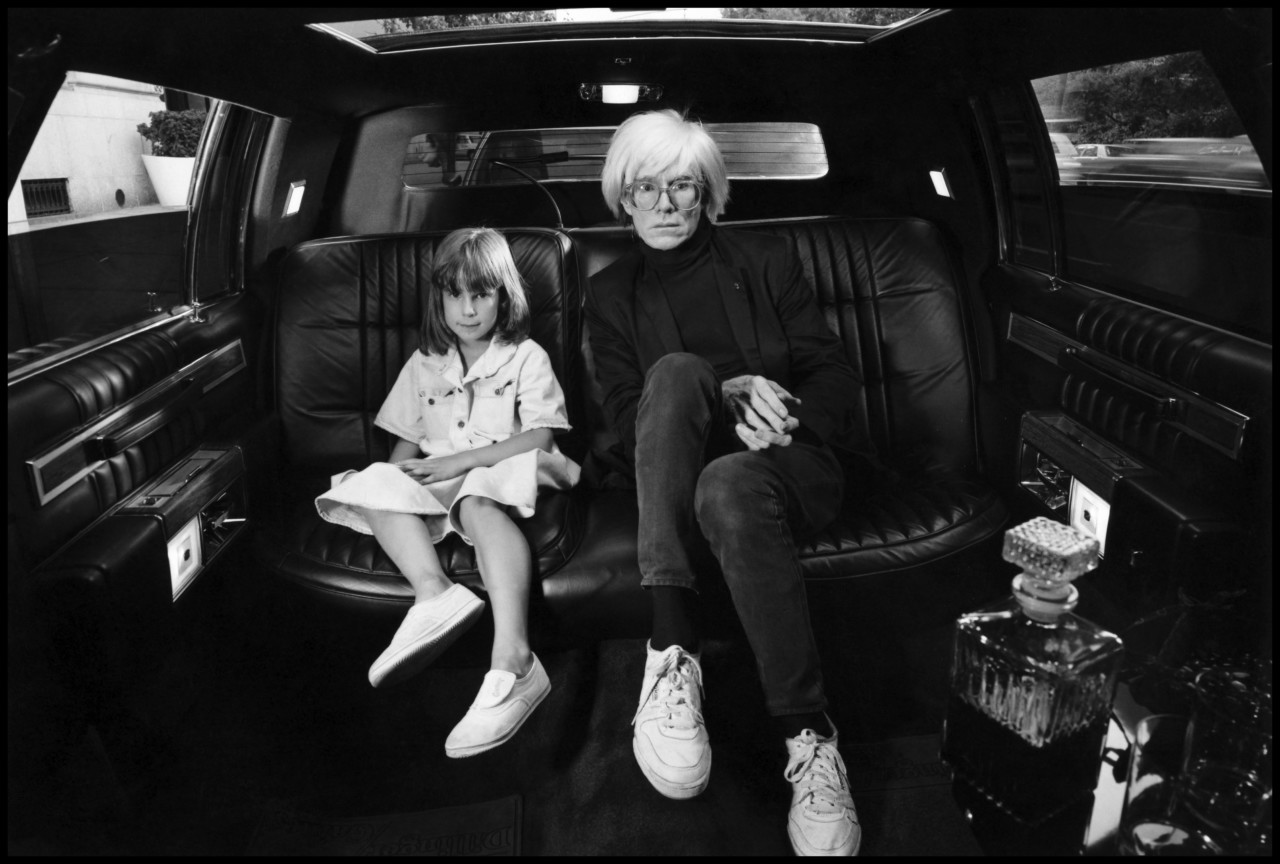 Did he simply tolerate having his face everywhere, or did he actively enjoy the collaboration in having his portrait taken? The latter may be suggested in the experimental photographs he posed for in a collaborative project with Magnum’s Philippe Halsman. He never shirked a publicity opportunity, but his roundtable of disciples would often act as vessels for his celebrity—there was always a camera, a recorder or some semblance of a filter between Warhol and his audience. Arnold, Erwitt, Bystedt: these photographers all captured him as something real. In their matter-of-fact images, Andy Warhol became something unfiltered. Alex Majoli on Artists and the Rewards of Environmental Portraiture