Raymond Depardon's new book sees him reexamining photographs made in his childhood home, creating a portrait of place, and memory 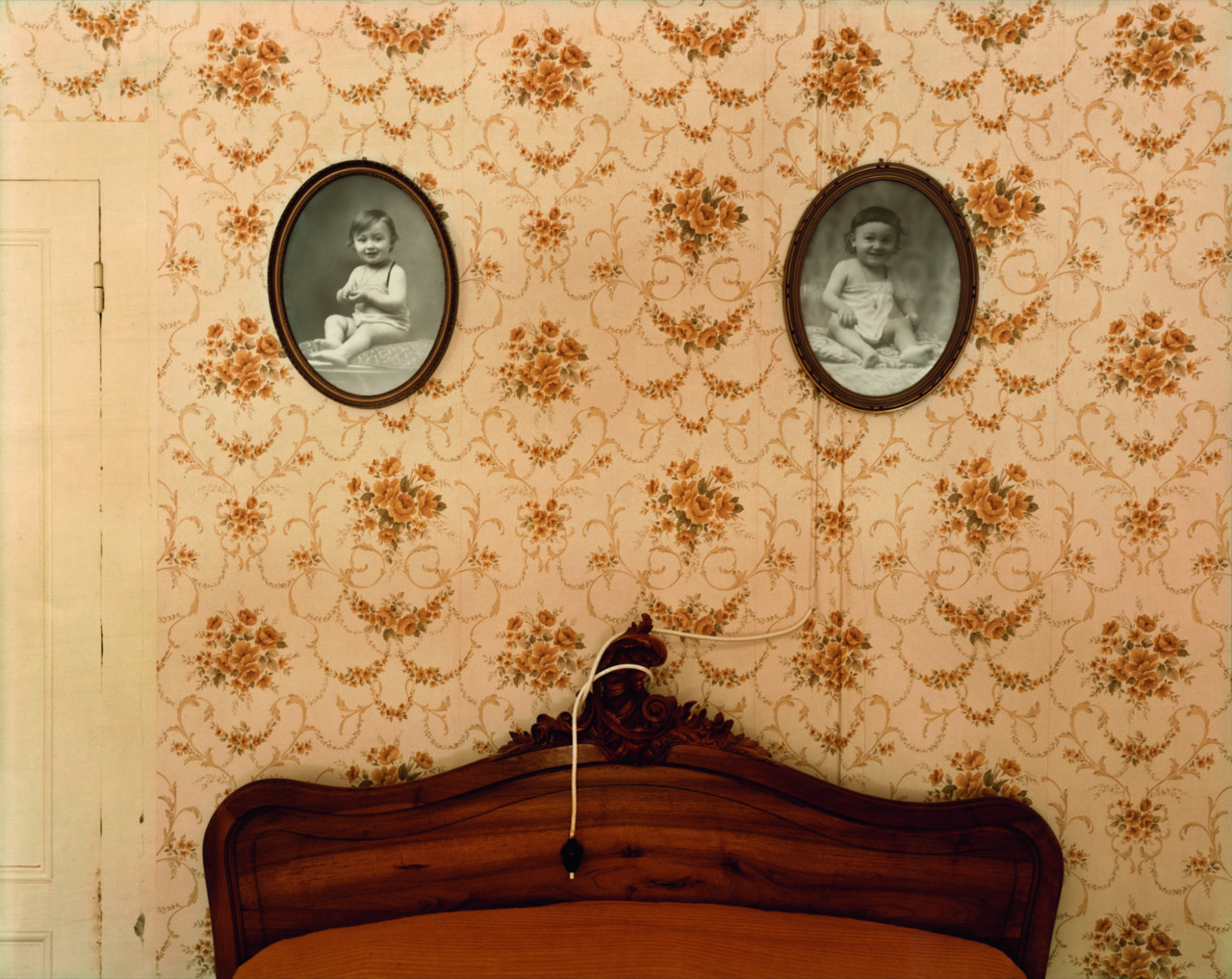 French photographer Raymond Depardon was born and raised on the Le Garet farm, near the banks of the Saône River and 500 meters from the Paris-Lyon freeway. The house dates back to the sixteenth century, and it was there he took his first photographs, before leaving the family home to pursue this passion. In 1994 Depardon published the celebrated book on the farm, La ferme du Garet, and in 2020, as a tribute to the place the farm continues to hold in his life, he returned to the work he has made there to create a new book, a journey through 34 color images.

The large-format photographs, taken using long exposures, transform each image into a singular scene, a silent passage within and around the farm. The smallest details, sometimes trivial in appearance, become his photographic subjects: a chair, a table, wallpaper patterns. Each image and the elements within it bring the viewer into the photographer’s memory, rendering the farm a locus in a permanent tension between past and present.

This work has recently been releasesd as a new limited edition book by Atelier EXB titled La Chambre. Depardon’s images are accompanied by a specially produced text from the philosopher Jacques Rancière, four seperate sections of which we excerpt from (in translation) below. […] This journey in images [that we see in La Chambre] contrasts with other books by Raymond Depardon in two unique ways: firstly, it is entirely in color; secondly, the photographer has, contrary to his usual habit, presented it without any written comment. Since he never believed that images spoke for themselves, it is therefore to the reader he has entrusted the duty of giving this work meaning. This reader, however, hesitates to orient himself in the work. The series offered to him seemingly reverses the usual order of countryside visits, where he first follows a path leading toward a house, before crossing the threshold and familiarizing himself with the details of its interior. He then thinks that the path may be reversed and that he is perhaps following in the footsteps not of one who has arrived today, but of one who left a long time ago. It begins at ground level, at child’s height, in the maternal home, before returning to an adult’s perspective, in order to move around the buildings and the courtyard, before taking the stony path that climbs towards the unknown, leaving the familiar paradise behind. 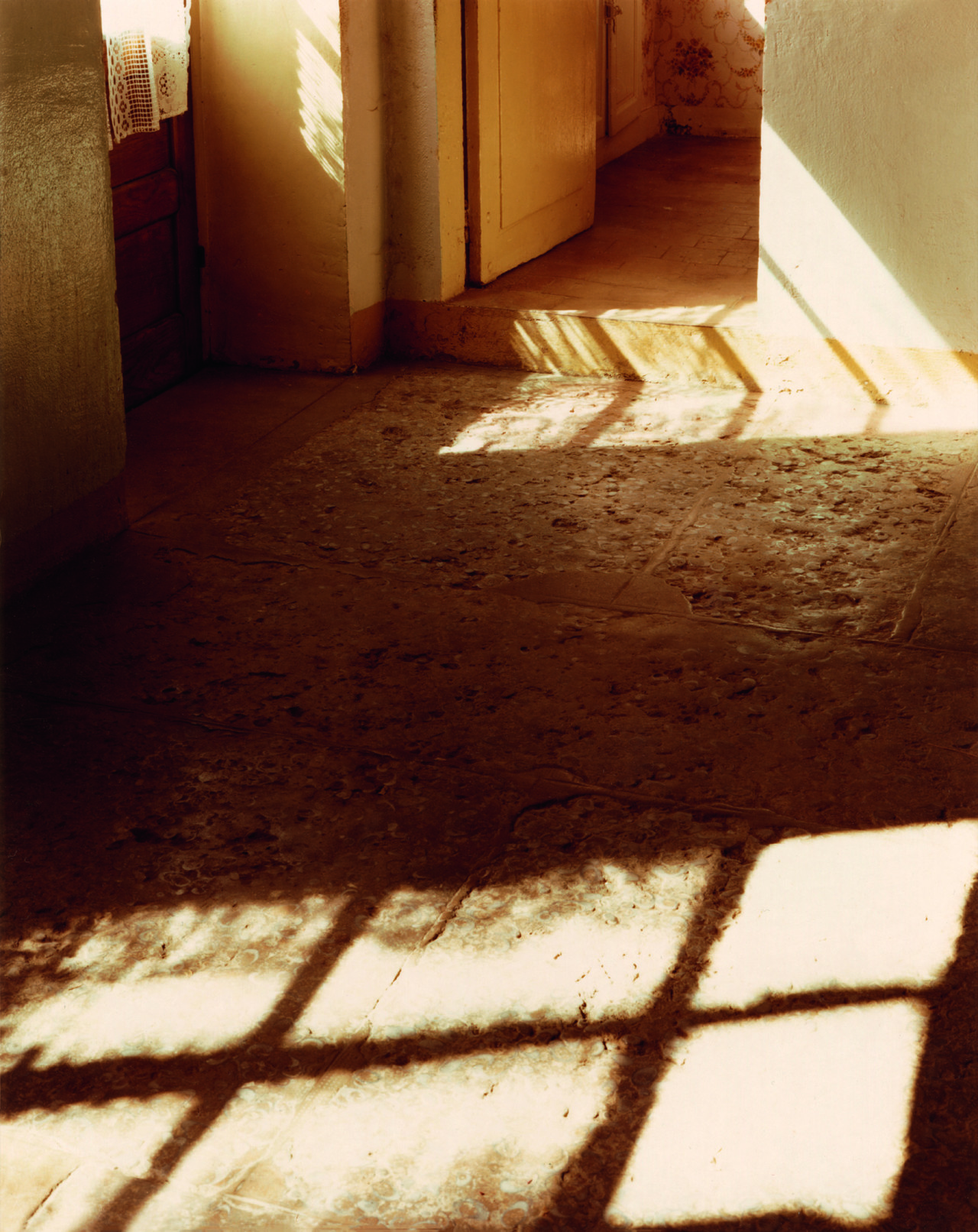 "This sun he shows which devours the fields, the courtyard, and the walls, he would rather associate with the heat and fatigue of work: the same excessive work which, he says, killed his father before his time... It is the absence of the deceased that manifests itself in this journey through empty places, seemingly frozen in this sunlight. " 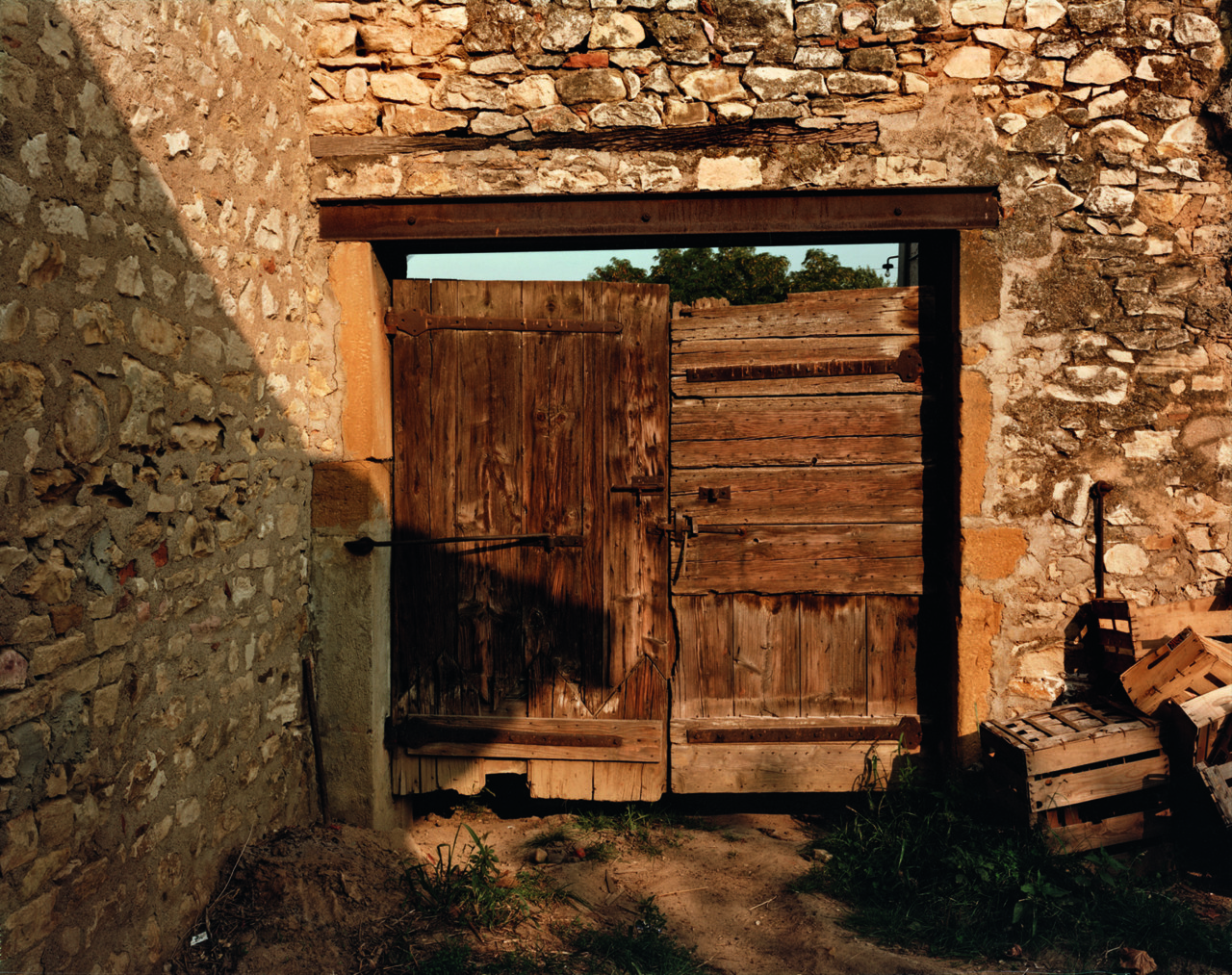 […] But it is not the sunlight of Mediterranean holiday travels to the south that the photographer – who lived for many months in the more brutal light of the Sahara – wants to illustrate. This sun he shows which devours the fields, the courtyard, and the walls, he would rather associate with the heat and fatigue of work: the same excessive work which, he says, killed his father before his time. It is perhaps this that would be immediately signified in the luminous glare which strikes a close-up of worn steps and tiling as if they preserved the imprints of a body weighed down by the life of toil. A life of toil from which he was grabbed too soon. It is the absence of the deceased that manifests itself in this journey through empty places, seemingly frozen in this sunlight. This absence that contrasts so strongly with the family animation that ran throughout the pages of La Ferme du Garet.

Of course, one can find a more prosaic reason for this absence (with one exception) of any sign of a human being in the house, its yard, or the other farm buildings. The photographs in La Chambre were made in a manner requiring a very long exposure, which precluded the recording of the farm’s inhabitants’ movements. We might also add that the images were made on the occasion of an assignment by the Delegation for Regional Planning, its task being to represent “the French landscape of the 1980s” and not the life of the Depardon family. Like other photographers who participate in objectivist work, a tradition that goes from Walker Evans to Lewis Baltz, Raymond’s sense of distance and love of the frame are easily matched to this aesthetic. Perhaps this is why the house is empty and the spaces are not always connected: we do not fix the place of the bed, of which we can only see the head, in the bedroom — nor that of the sink, in the kitchen. The reader might then think that what is represented is a collection of spaces from a former social life, rather than a familial home. From those spaces would come the abundance of details that are captured in close-ups. But their apparent objectivity can be deceptive: left to their own devices, a twisted table leg, the daisies on an oilcloth, worn and refinished tiles can serve as testimonies of peasant habitat. But, in La Ferme du Garet, Raymond Depardon gave the same image a completely different meaning by drawing our attention to these red marks on the slabs, which his older brother made him believe were stains of blood from an old torture chamber. 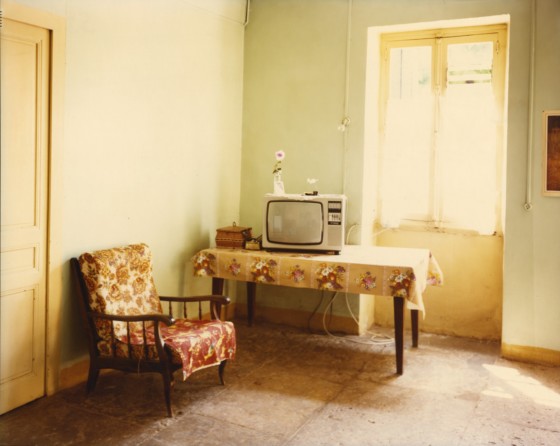 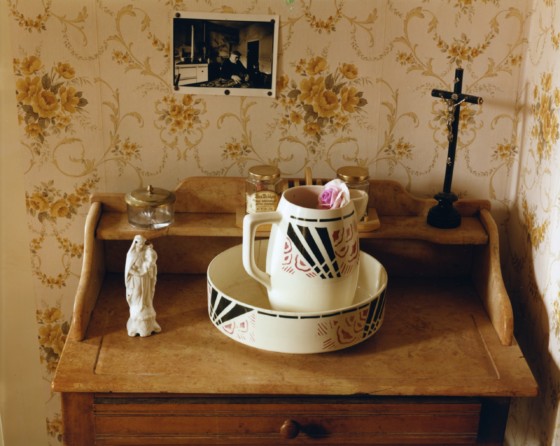 "The ramp which is used to take the hay bales up into the barn seems to have nothing more to do; the shovel balanced in the middle of the golden grain appears as a sign of a life suspended by the wave of a magic wand..." […] The uncertainty seems to increase when one enters a stable, where, on the walls – blackened by dust – hang cobwebs that the spiders must have long-ago deserted, while the trough and the hay-rack seem to wait for the animals in vain: an absence in this summer setting that does not seem to fill the oxen that we will see later in a winter landscape. Even the signs of agricultural activity on this still-operating farm are as if struck with paralysis. The ramp which is used to take the hay bales up into the barn seems to have nothing more to do; the shovel balanced in the middle of the golden grain appears as a sign of a life suspended by the wave of a magic wand, as in the castle of Sleeping Beauty; and the grain sorter, enveloped in its blonde light, already looks like something from an agricultural museum. The reader is then tempted to relate these images to a photograph of the courtyard, also deserted, where empty crates pile up in front of a wall. He remembers that Raymond Depardon explained to us, in La Ferme du Garet, how his brother, upon taking over the farm, had oriented himself and the business towards growing produce for sale in local markets. But he also reminded us that this reorientation was not by choice. It was the result of the upheaval brought about by the building of the Autoroute du Soleil [the A6 highway that links Paris to Lyon] which had cleaved the farm in two, forcing Antoine Depardon to cede, for a low price, the land which was on the far side of the road, and where supermarkets and fast-food restaurants were now being built. […] This “failed” photo [above], however, the photographer kept. He even accentuated its strangeness by separating it from all the other interior images and placing it between a view of the bridge over the Saône in a soft morning light and an image of the deserted courtyard in the midday heat. The sole occupant of the house has thus become a ghostly figure. And the path through the wheat separates her by an infinite distance from these two strangers, these living beings from another age and another world, that the photographer has captured in a southern landscape where all connection with the family home has disappeared: the young woman whom we have never seen in the courtyard of the farm, and the child with her whom we had seen posing with her brother on the stone staircase [in La Ferme du Garet] but who turns her back to us here, as if to acknowledge the separation. At this point the social history of a lost way of life and a personal history come together. And this ultimate photograph seems to take in its own way the last words of the two young lovers of La Cerisaie: “Farewell, old life – Hello new life”. 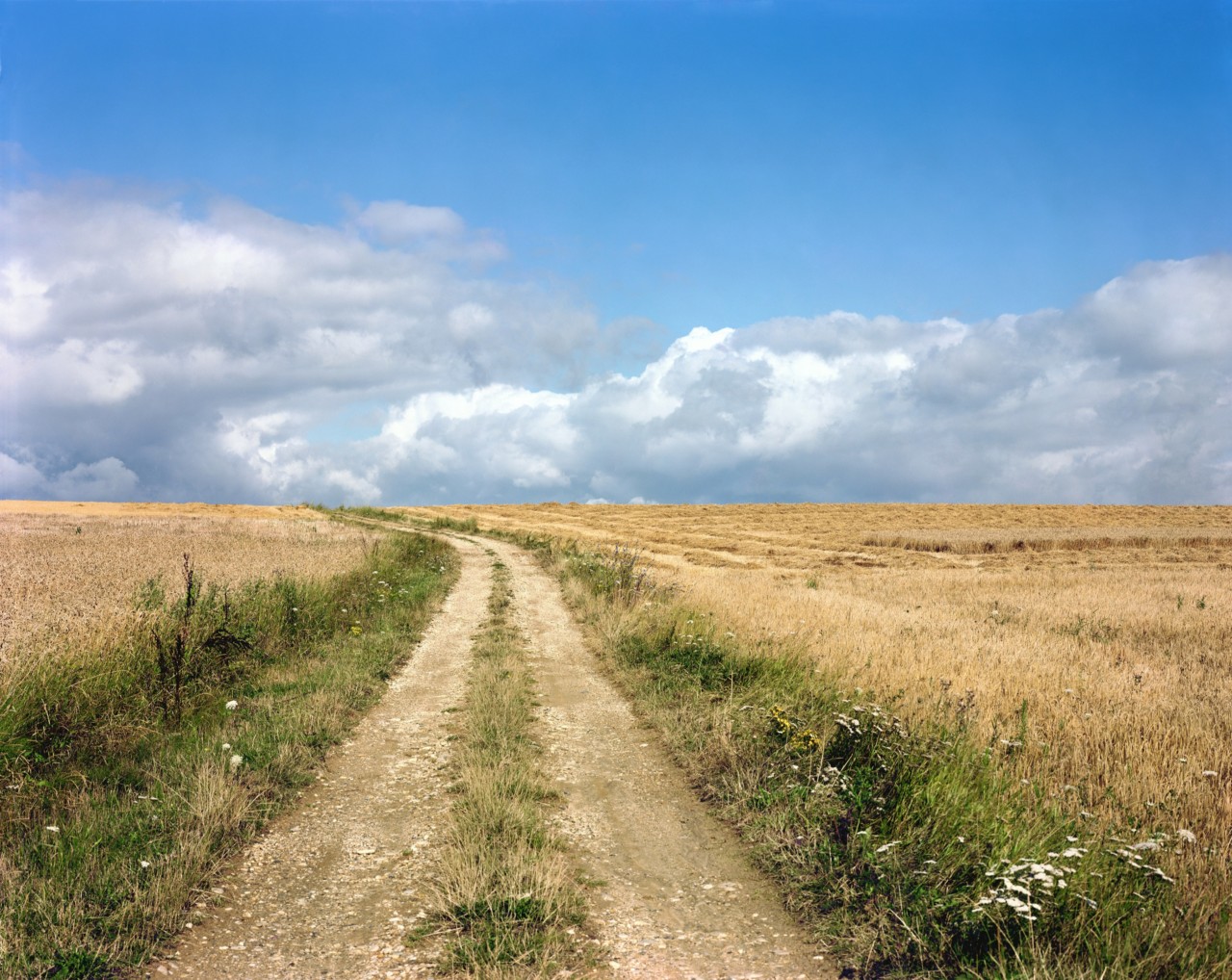