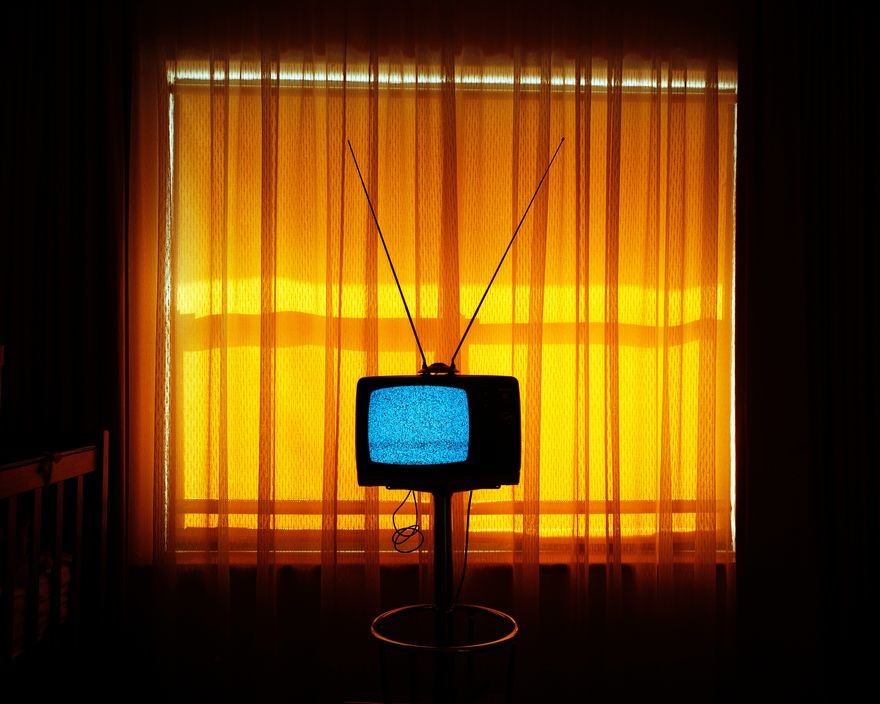 Christmas down under can often seem uncanny, with a traditional mid-winter festivity being celebrated in the heat of the Australian summer.

In his family album series “The Christmas Tree Bucket”, Magnum photographer Trent Parke plays on this inherent irony. Rejecting the tropes of Christmas revelry and instead amplifying the pervading sense of empty festive commercialism, Parkes hones in on the smaller details; the sun-crisp barbeques; screaming, fighting toddlers; a burning gingerbread house; the inertia of re-reading of the television guide; and the hanging, later decapitated, Santa Claus piñata. All nausea-inducing tokens of Christmas absurdism, which eventually culminate in the photographer himself vomiting into the infamous Christmas tree bucket.

Here, Parke gives us a first-hand, darkly surreal account of how the series was inspired by suburbia, a new haircut and a physical bout of existential Christmas dread. 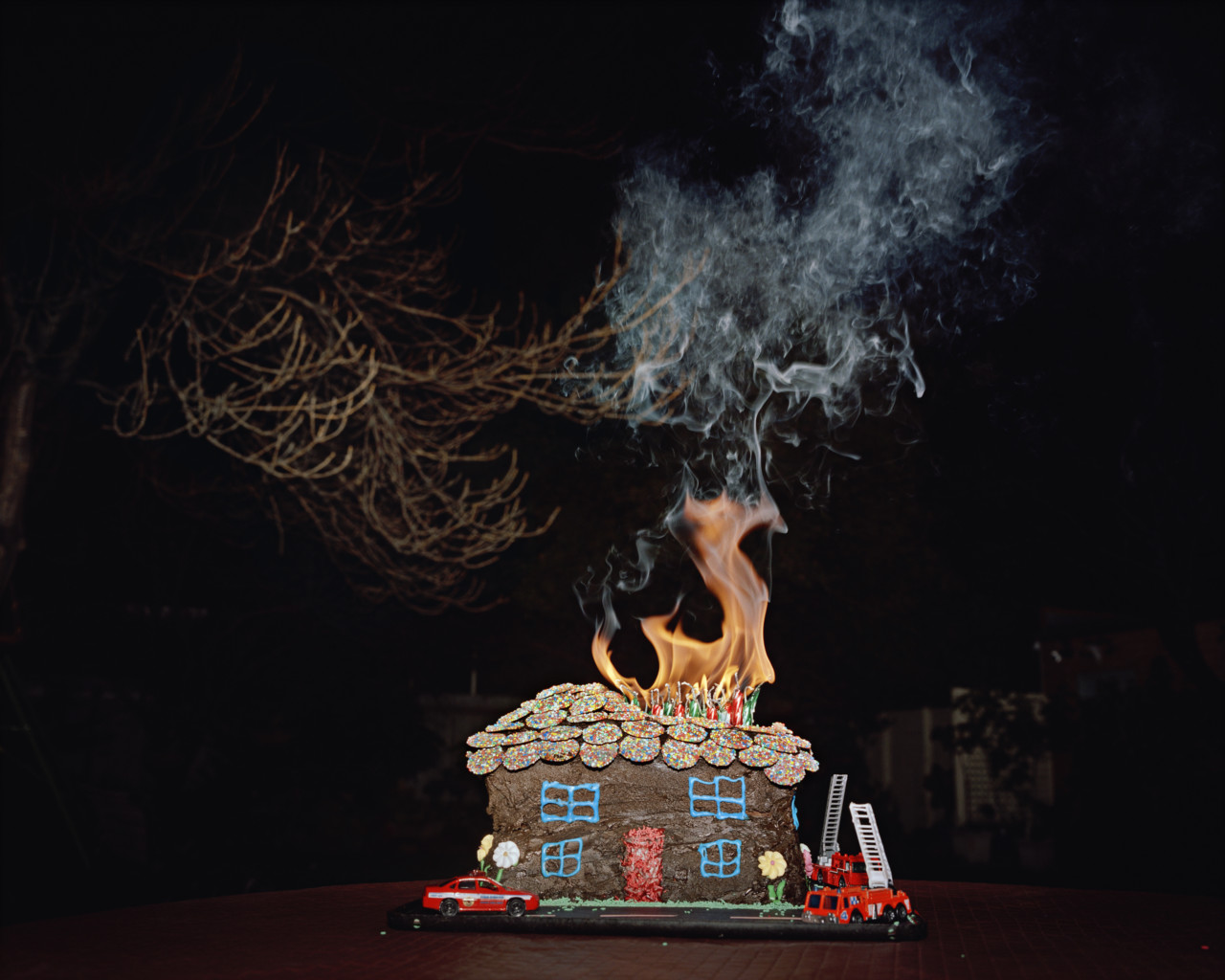 Twas the night before Christmas , when all through the house,
Not a creature was stirring , not even a mouse…

In 2004, our first son Jem was born.  At the time my partner Narelle and I, lived in a small, two-bedroom apartment in Sydney. Apart from two years living in a tent, I had spent the last 15 years of my life living in apartment blocks.
In 2006 our second son Dash was born. Our small two-bedroom apartment became even smaller. Things had to change. Wanting more space, family support and a change of scenery we moved to the city of Adelaide, Narelle’s place of birth. 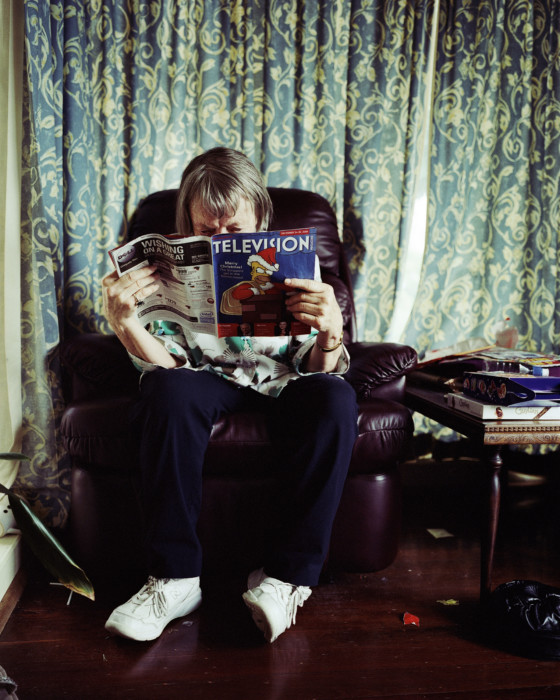 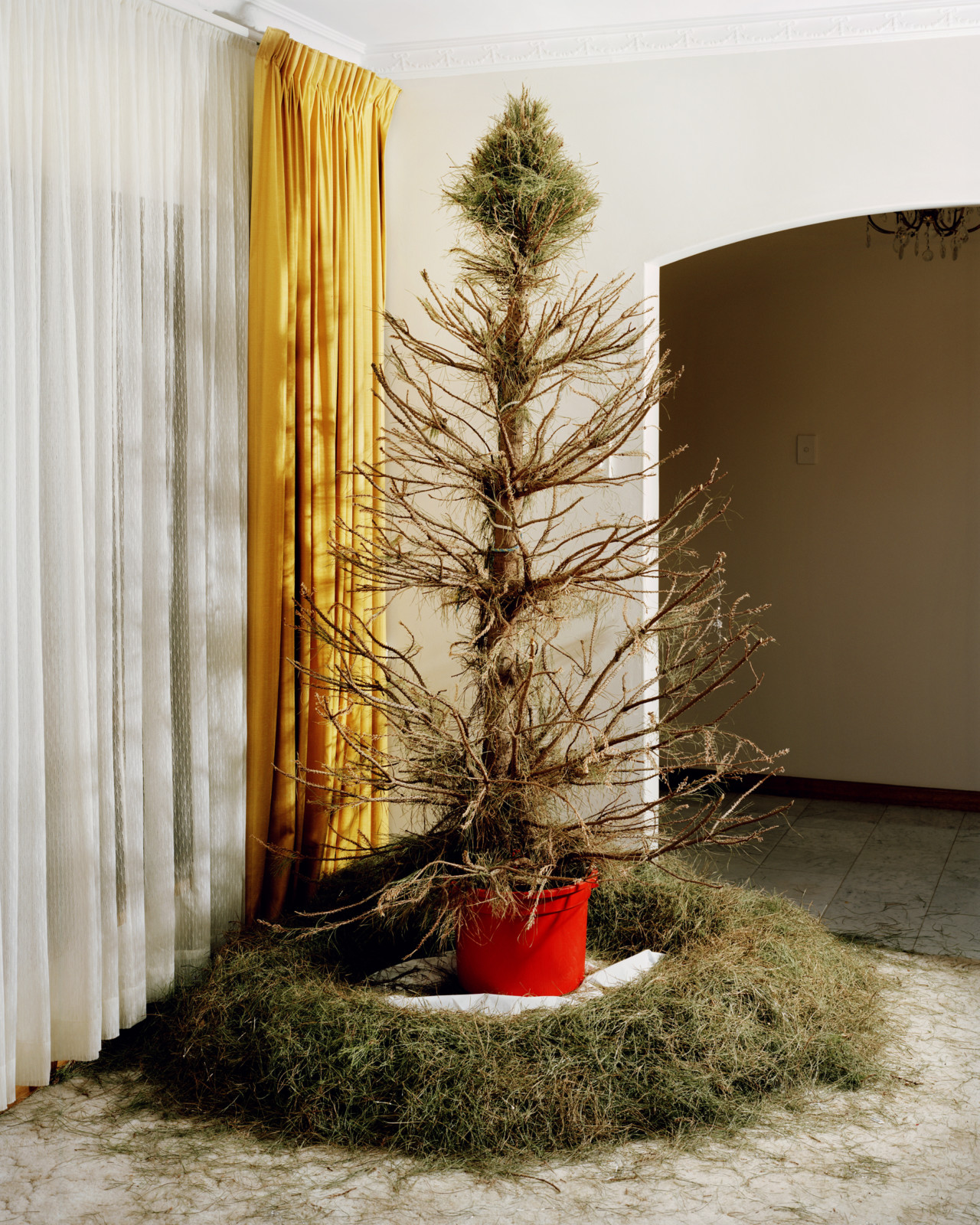 On arriving in Adelaide, with our life in storage, we bunked down with Narelle’s folks while we tried to find a place to live. Like my parents in Newcastle, they live in the suburbs.

One afternoon I decided to venture to the local mega mall, specifically to the hairdresser. After removing all of my very long hair the very young hairdresser said ‘There you go, a new hair cut for a new start’. I thought, that’s nice and what a great thing it was to be able to see again. On returning to the in-laws that evening I started to feel very odd and a little queasy. As day turned to night I lay down on the freshly mown back lawn and watched clouds drift past a nearly full moon. I expected to hear a dog howl or a cat wail.

I started vomiting, violently, and uncontrollably. I grabbed the nearest thing I could throw up into. "As day turned to night I lay down on the freshly mown back lawn and watched clouds drift past a nearly full moon. I expected to hear a dog howl or a cat wail" 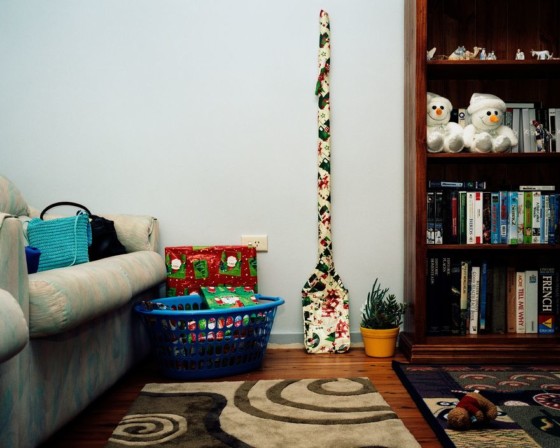 Narelle and her parents, Laurie and Ann were sitting in the back room watching the TV. ‘Narelle’ I yelled out, again throwing up.

‘What’ she said, ‘You want me to come out and photograph you?’. ‘Yeah’ I yelled back.

‘Ohh you’ve got to be joking’ Laurie gasped, as he rose from his chair. 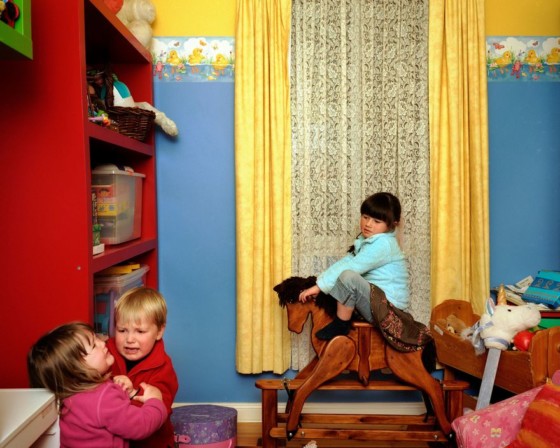 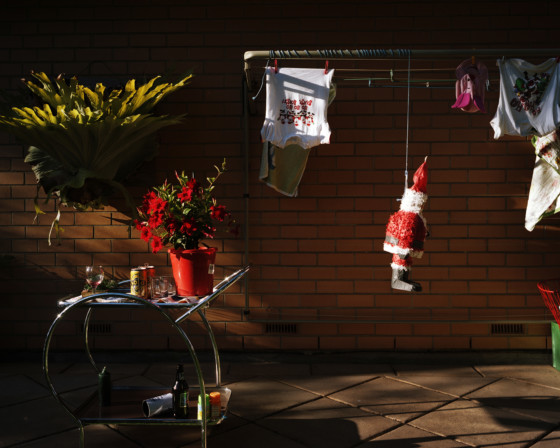 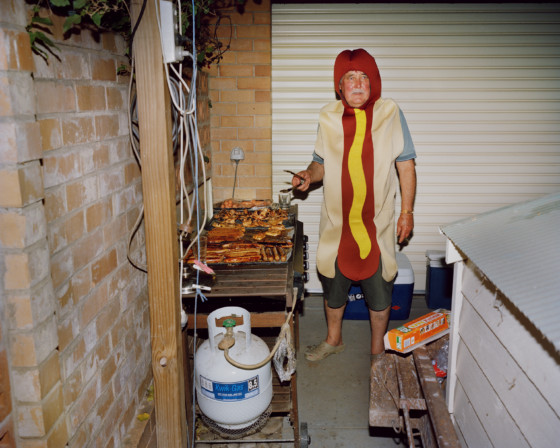 Narelle came out and climbed on to a table. The sudden blast of the flash lit up what I could smell, but couldn’t see. Bright, brilliant, red. 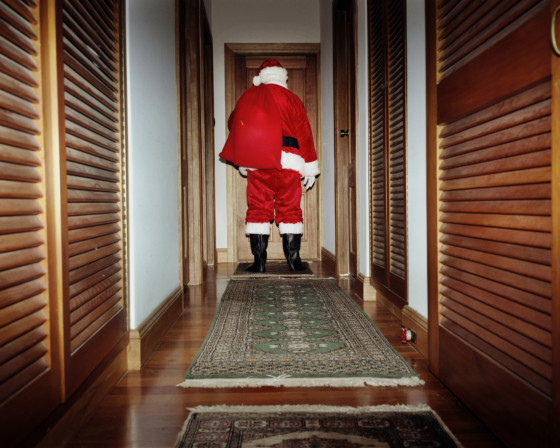 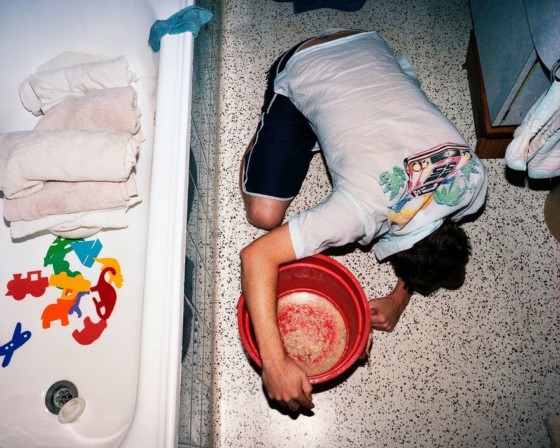 " I started to think how strange, families, suburbia, life, vomit and in particular Christmas…. really was" 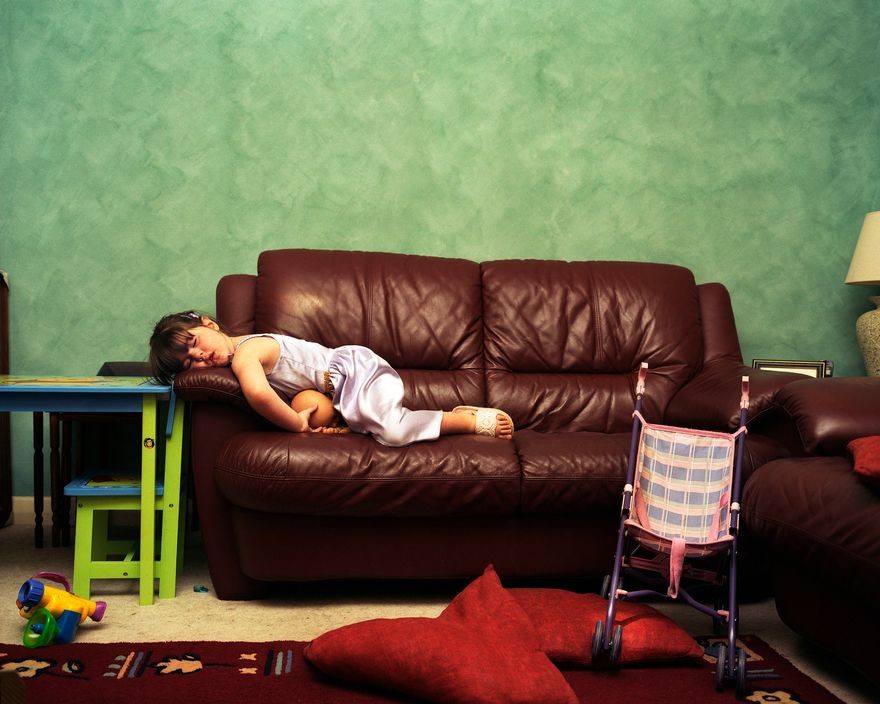 And it was there while staring into that bright red bucket, vomiting every hour on the hour, for fifteen hours straight, that I started to think how strange, families, suburbia, life, vomit and in particular Christmas…. really was.