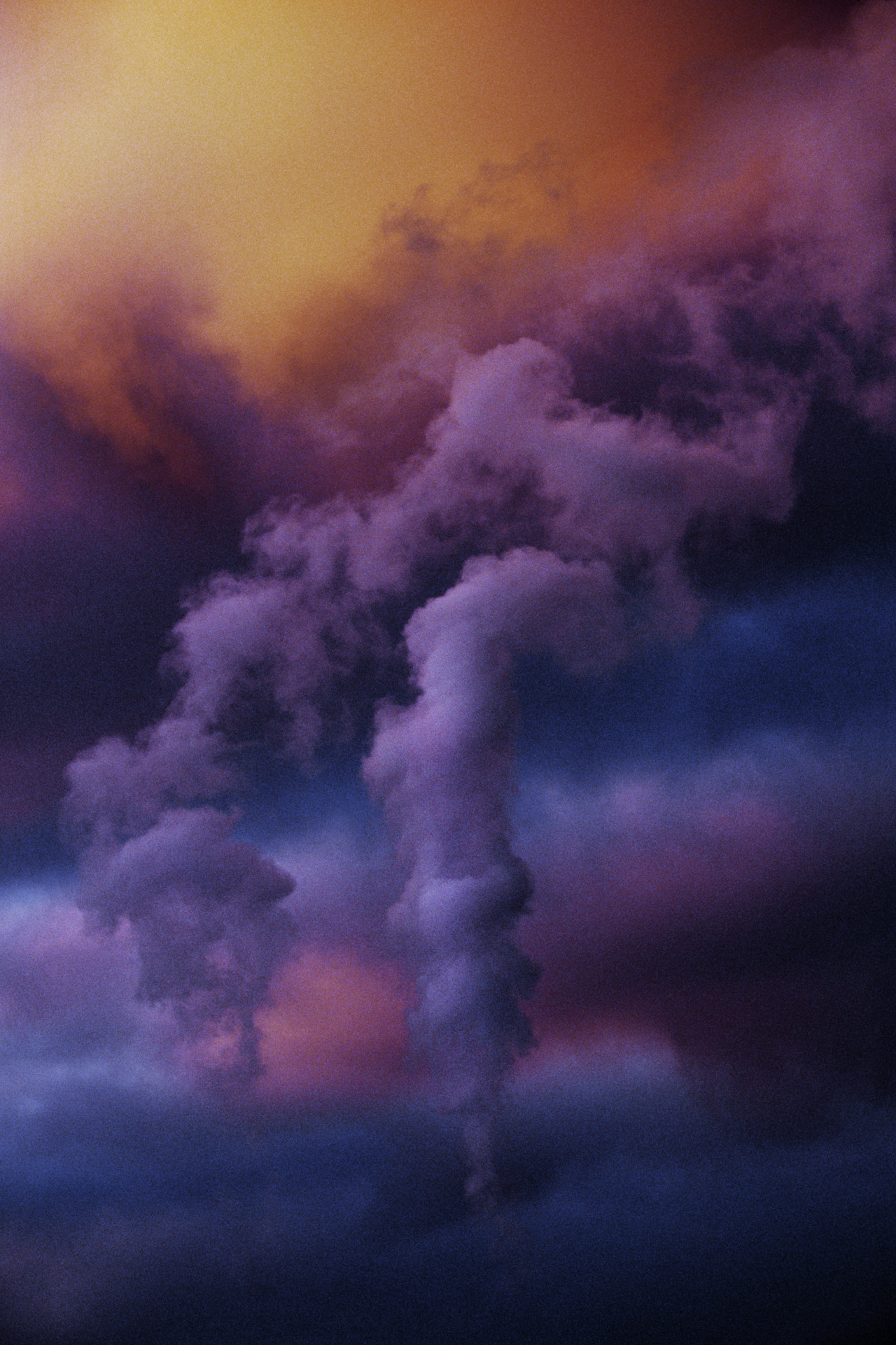 Trent Parke‘s image above, from the book project The Crimsion Line, is available now as part of the Magnum Editions Posters collection. You can explore this new, limited edition collectiom in full on the Magnum Shop, here.

The book, Crimson Line, is available now, published by Stanley/Barker.

“I watched a lot of space films when I was making Crimson. Oblivion, LIFE, Ad Astra, Interstellar, Martian, A.I Artificial Intelligence, and, of course, reruns of the classics: Blade Runner, Contact, 2001: A Space Odyssey. I am a sci-fi guy…fantasy and science fiction… not reality or documentary…I like to escape reality…”

At the beginning of the Covid-19 shut down, Trent Parke and his creative collaborator and partner Narelle Autio, were concerned about what it would mean for their livelihoods. A number of exhibitions were planned for Australia, including one at the Michael Reid Gallery in Sydney of Parke’s most recent work “The Crimson Line”. This project is his first since stepping away from photography in 2015, after seven years working intensively on his meditation on Home, The Black Rose. Exhausted, Parke sought to reinvigorate his creativity by exploring film making with Autio. This led to critical success with A Summation of Force, their resulting film and VR production, taking them to film festivals all over the world and ending up at Sundance. 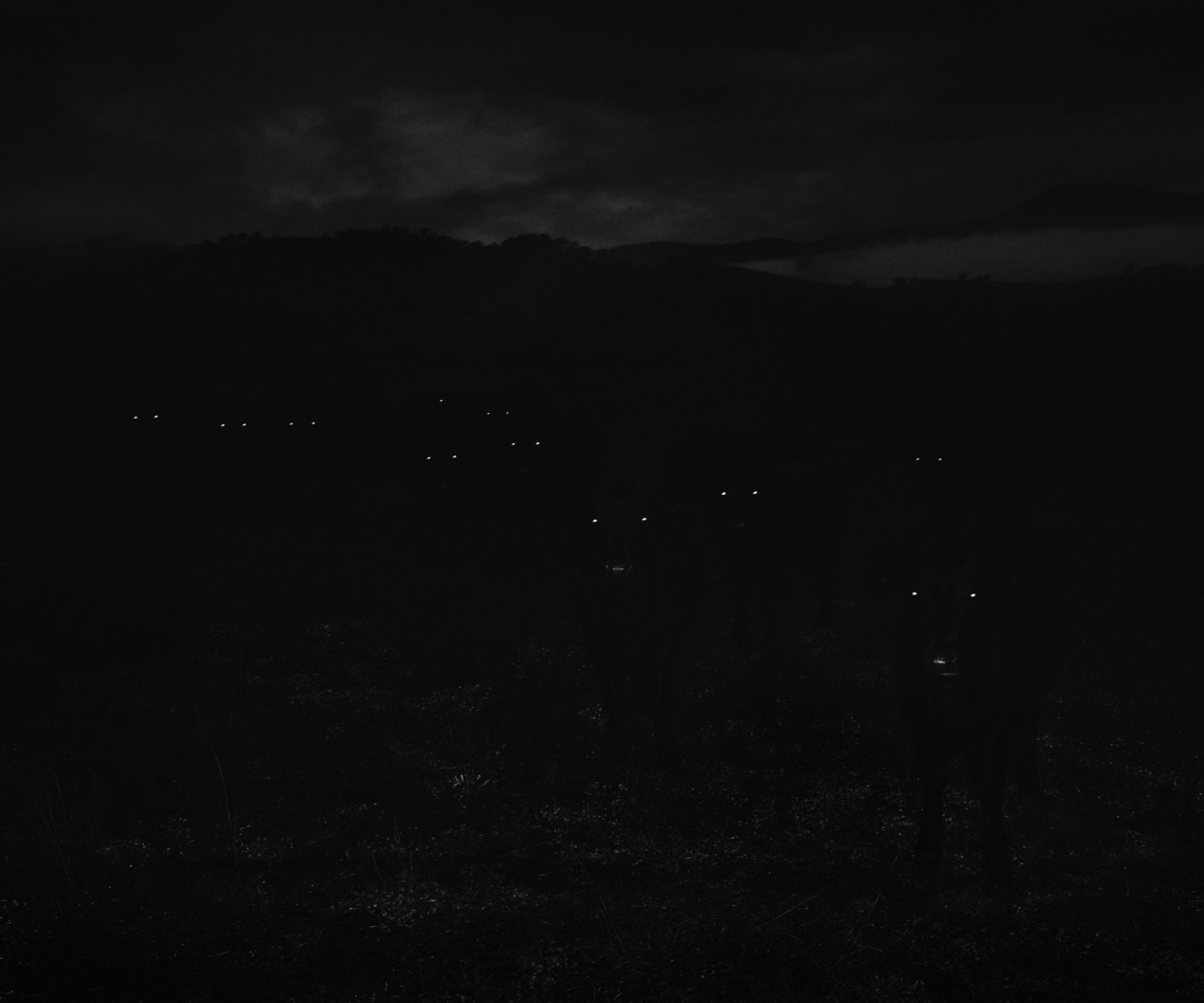 "This project is his first since stepping away from photography in 2015, after seven years working intensively on his meditation on Home, the Black Rose" 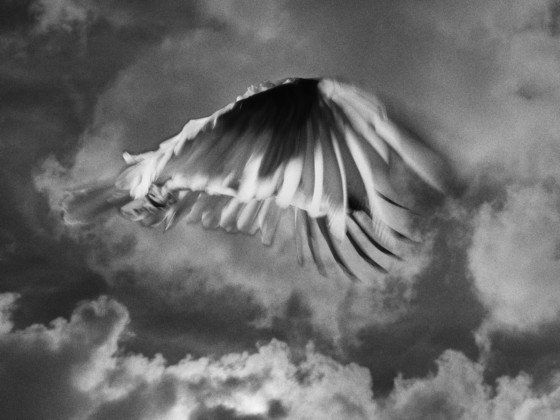 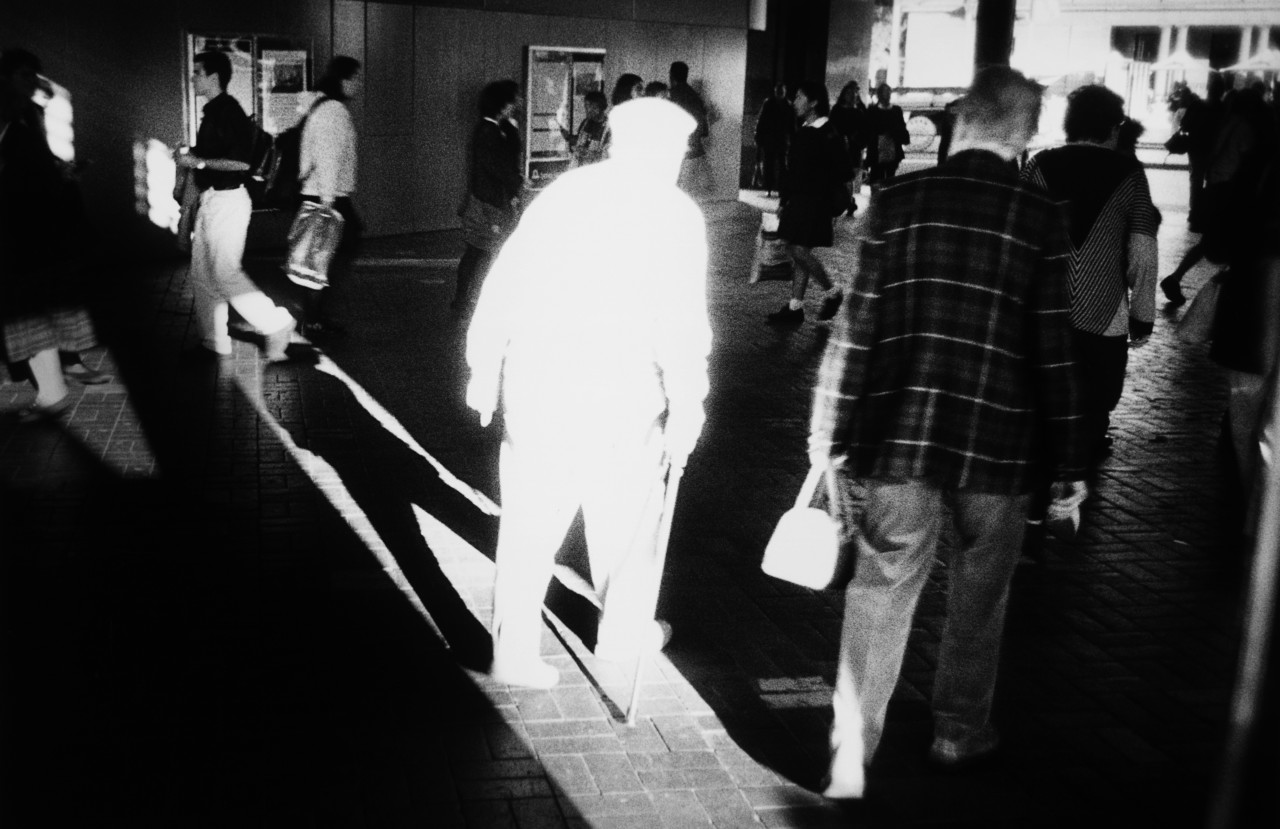 For anyone who has followed Parke’s career, it is clear that film and science fiction in particular have always been a strong influence on his work. The eerily, otherworldly, black and white street photography in ‘Dream/Life’, which first brought him to international attention, was followed by ‘Minutes to Midnight’ – photographs from a road trip around the Australian continent, the dystopian tone of which reflected Parke’s sense of growing unease with the politics of that decade.

"For anyone who has followed Parke’s career, it is clear that film and science fiction in particular have always been a strong influence on his work." 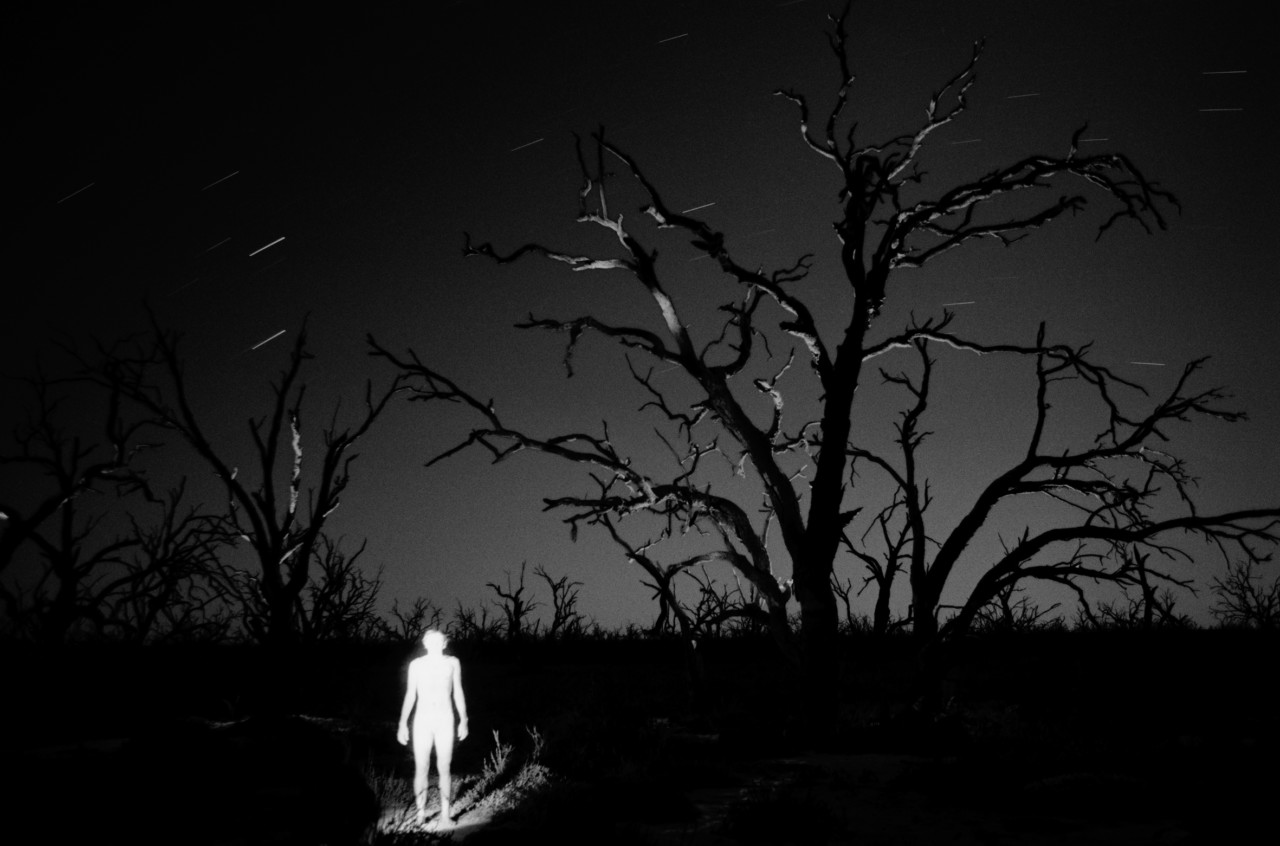 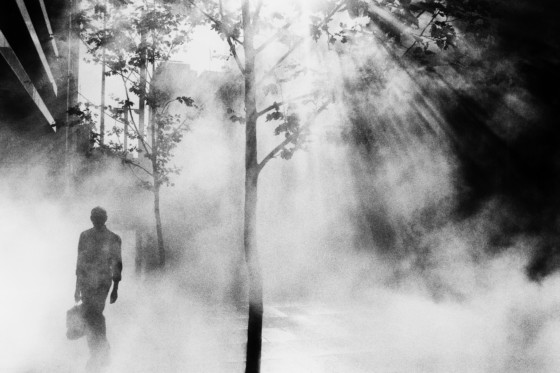 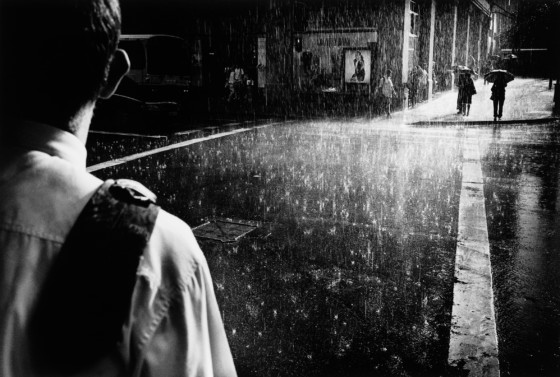 Although it comes 17 years later, The Crimson Line is a follow up to that project. A return to “the simple black box and the single click”, it is a meditation on the adverse effects of industry and climate change through an exploration of the colors found in the sky during the first minutes of sunrise. Shot in the industrial landscape surrounding the beachside suburb in Adelaide that is Parke’s home, his camera is often trained on the plumes of steam emanating from factory chimneys. Bathed in the intense reds and pinks of the early sun, they appear ominous and alien. 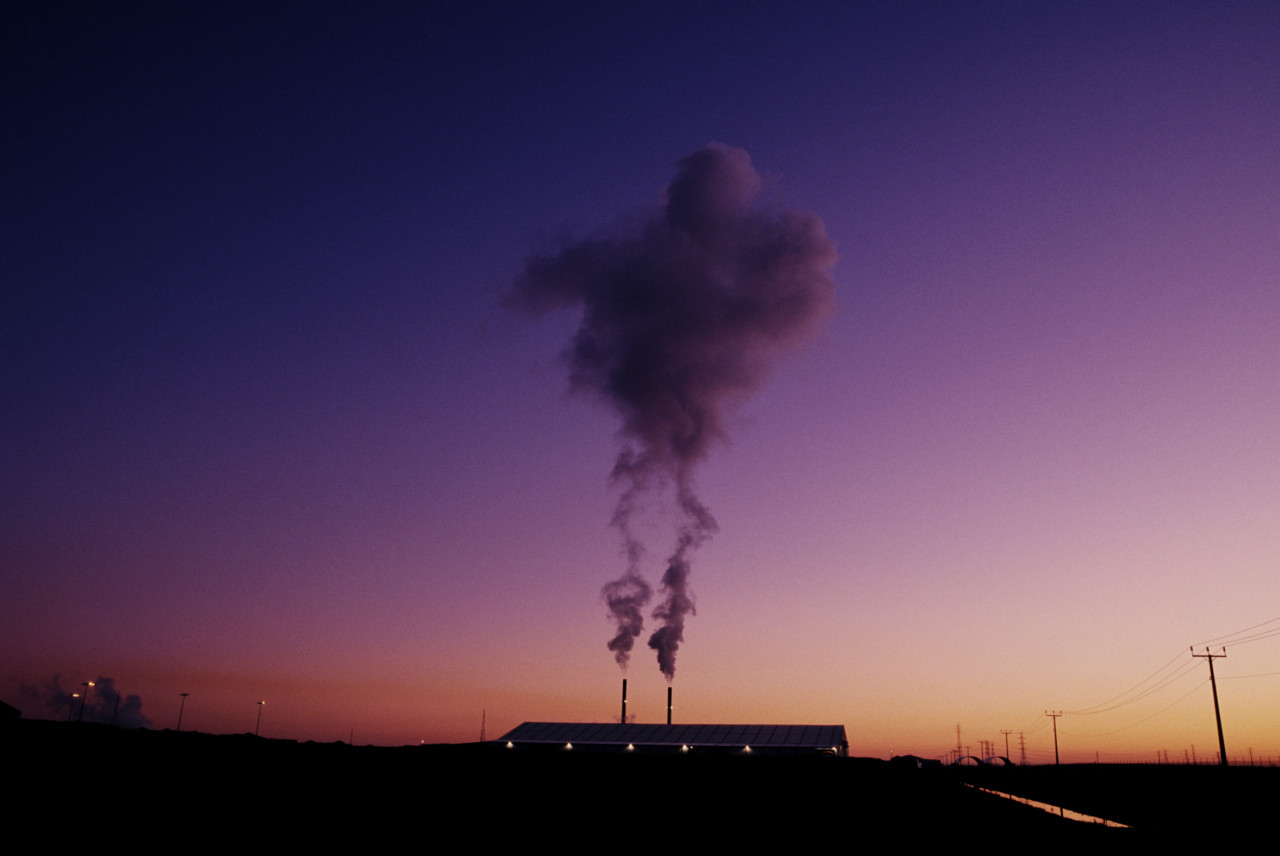 "Music plays an important role in Parke’s work, for the Crimson Line for example, he cites Hans Zimmer as an influence. The German composer of over 150 film soundtracks, is known for his work combining electronic and orchestral music in atmospheric and epic scores" 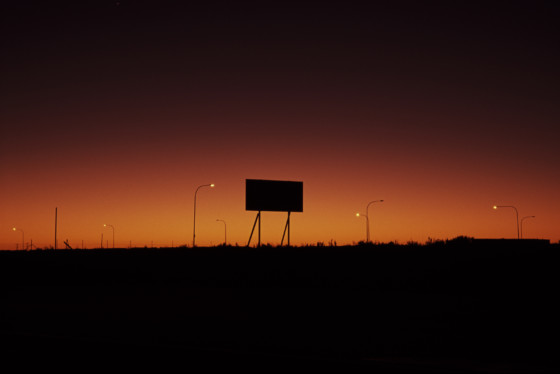 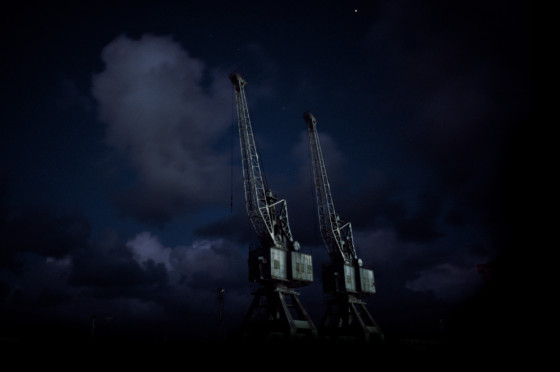 Music also plays an important role in Parke’s work, for the Crimson Line for example, he cites Hans Zimmer as an influence. The German composer of over 150 film soundtracks, is known for his work combining electronic and orchestral music in atmospheric and epic scores. As Parke explains: “I can go back to every major body of work I have done and know the music I was listening to at that time … it’s an important part of my process. These days when I am creating work it’s like making a film. I have a soundtrack in my head, sometimes literally an actual soundtrack from a movie, at other times a playlist of individual songs that’s playing as an album in the movie I am making in my own head… and that can influence and guide the mood and direction of the photographs I make. The scenes and light I am drawn to.”

Parke’s Sydney exhibition of the Crimson Line opened in the last week of May, as lockdown eased in Australia. However, this didn’t represent a resuming of activity for Parke and Autio, rather, a continuation of an already busy period. They are constantly juggling the demands of their careers as photographers and film-makers, with their role as parents of two sporty teenage boys. As Parke explains this is “part of the problem of trying to do everything… shooting, scanning, editing and printing all the work, emails, parenting, coaching. We do everything (almost nothing is outsourced) and we never, ever, have trouble not keeping busy. It’s always flat-out.” 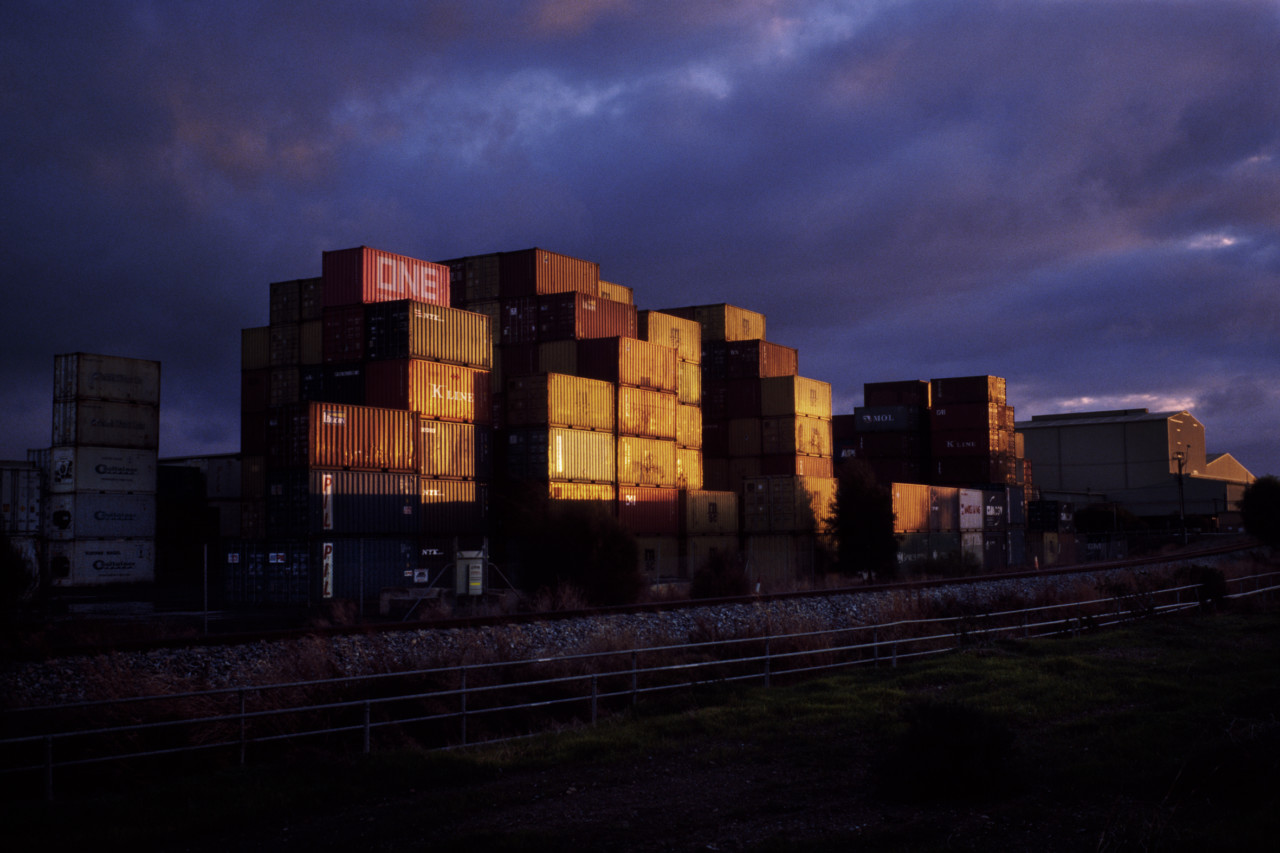 The couple have managed to find balance in their lives by taking turns between them to release projects. Parke continues, “When kids came along Narelle’s career went on hold, but she continued to play a major part in my work and the making of the Black Rose, which I made while the kids were young. I was never going to be one of those photographers where work and career is more important than family.  We have found ways to make work and actively be involved with the boys.” Aside from Autio’s job teaching swimming, the couple survive on the income generated from their personal work, reinvesting much of what they make into the next project. Parke describes their approach to photography as exploratory: “So much of the time I feel like a scientist or detective looking for the clues, searching for the answers.” It’s a partnership and they work together on almost everything. “Even if it’s not an outward collaboration as a piece of work, we are always working behind the scenes on each other’s personal work, scanning, spotting, printing, or curating whatever needs to be done,” Parke says. Behind their laidback exterior, the couple structure their days rigorously: while Parke leads on training the boys (who have excelled in cricket like their father), the two take it in turns on the domestic front, one working on duties at home while the other works on whatever exhibition or book is coming up. They are efficient by necessity, as Parke illustrates in his description of making work for the Crimson Line: “I was up before dawn… shot for the [first] ten minutes of light, then back to take [the] kids to school. That was it. Every day for 6 months during winter.” 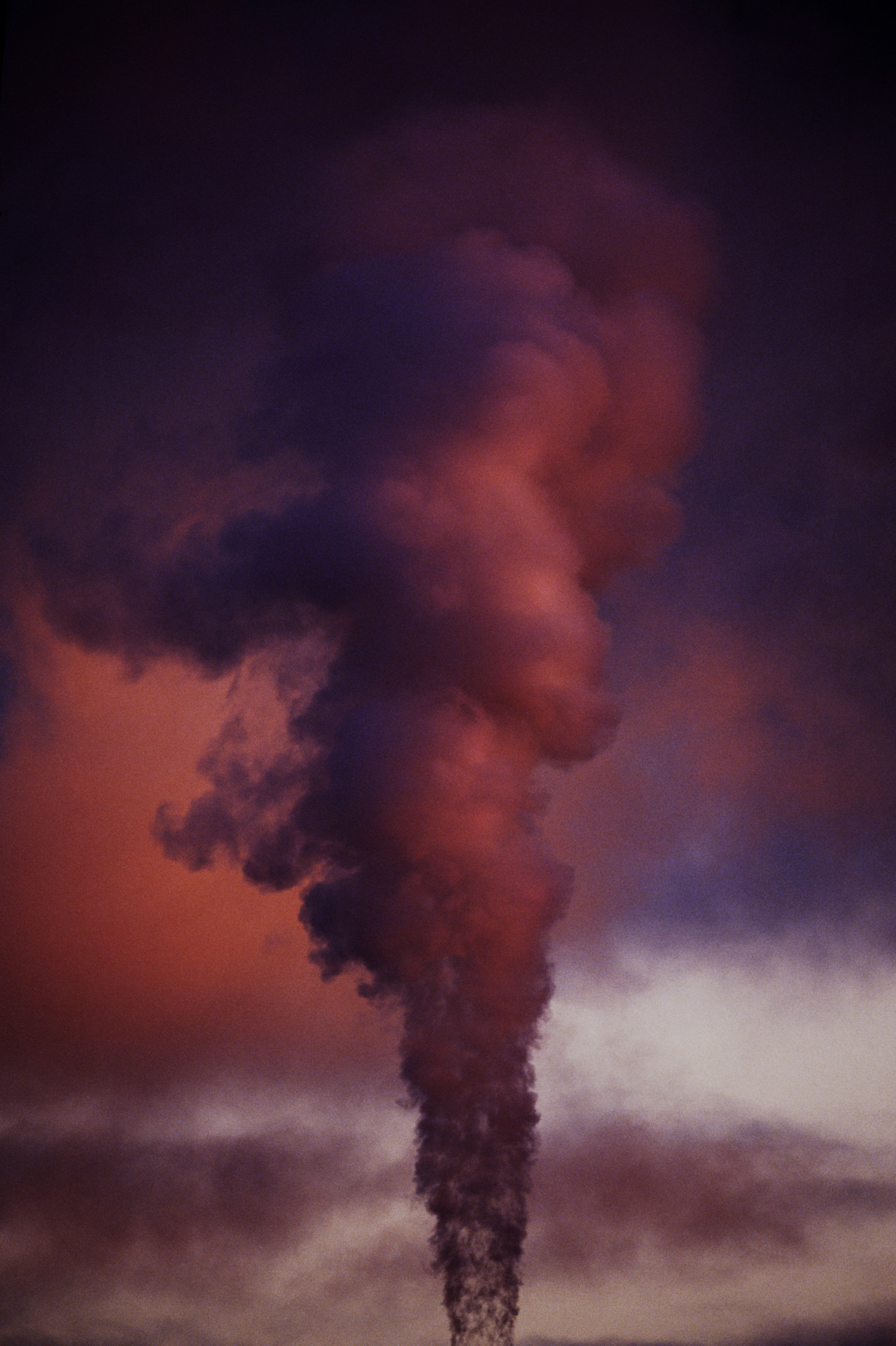 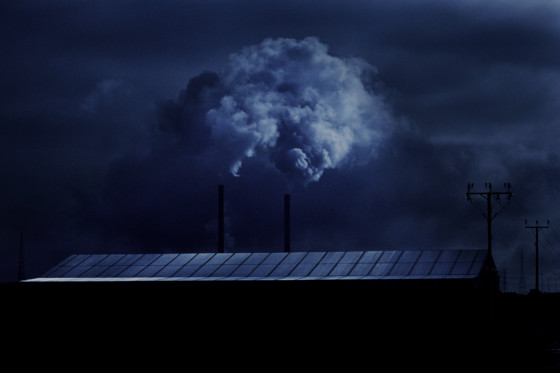 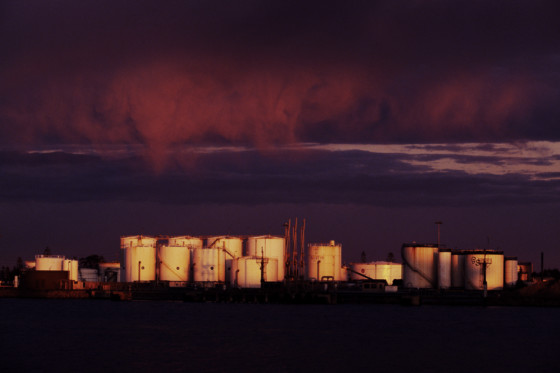 "Bathed in the intense reds and pinks of the early sun, they appear ominous and alien."

During the Covid-19 lockdown, there was little evidence of the unfolding crisis visible in their quiet neighborhood. However, without school and the boys’ cricket routine, there has been time for lots of family film viewing, and Parke and Autio have both been scanning intensively and working on books due to be released by Stanley/Barker later this year – Autio’s on water, Parke’s on The Crimson Line. Parke has also been taking his Leica camera out on fitness rides in the late light with his sons – continuing his project 365, in which he is taking a photograph every day of the year. Throughout their careers, both Parke and Autio have trained their lenses on their family and at present, they are experimenting with new ideas for a project that will include the boys and play with the idea of fashion and film. 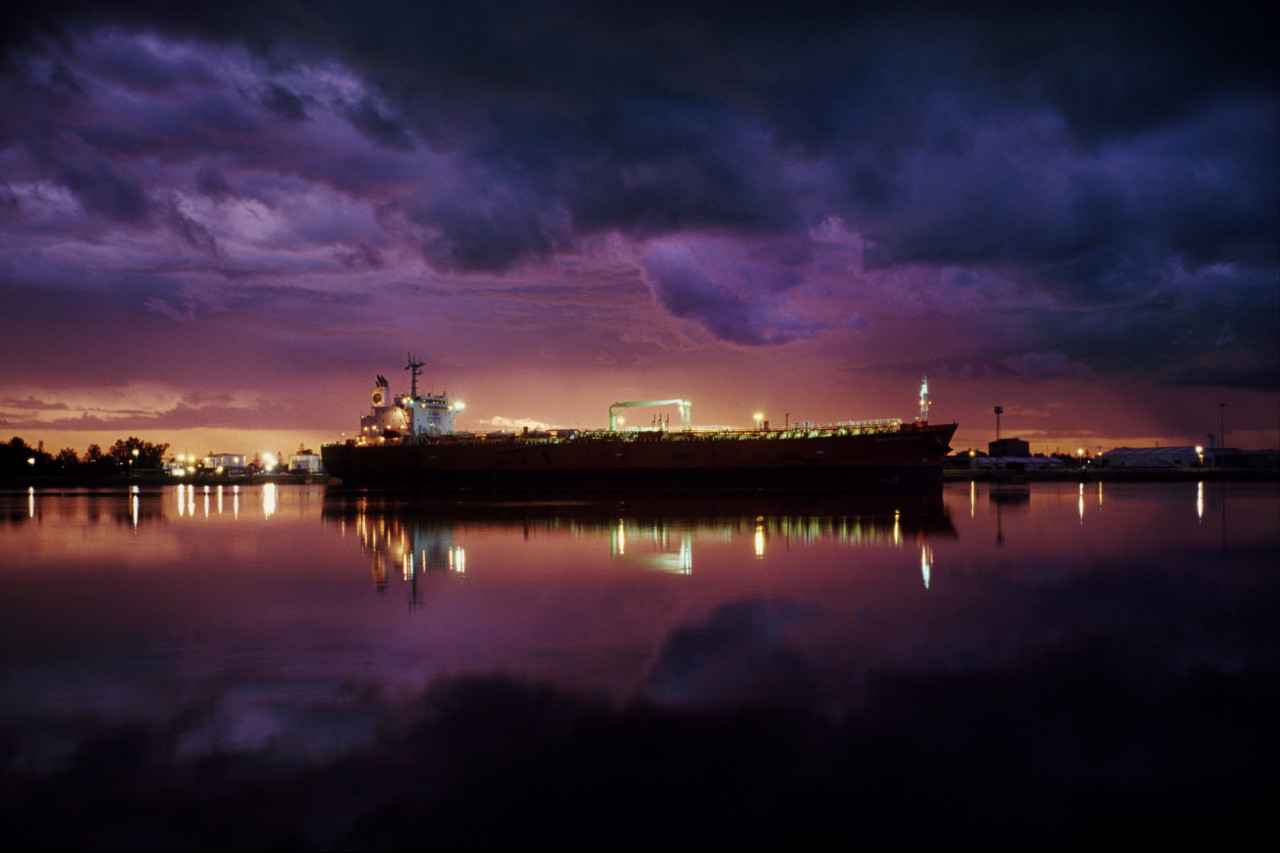 "I was up before dawn… shot for the [first] ten minutes of light, then back to take [the] kids to school. That was it. Every day for 6 months during winter." 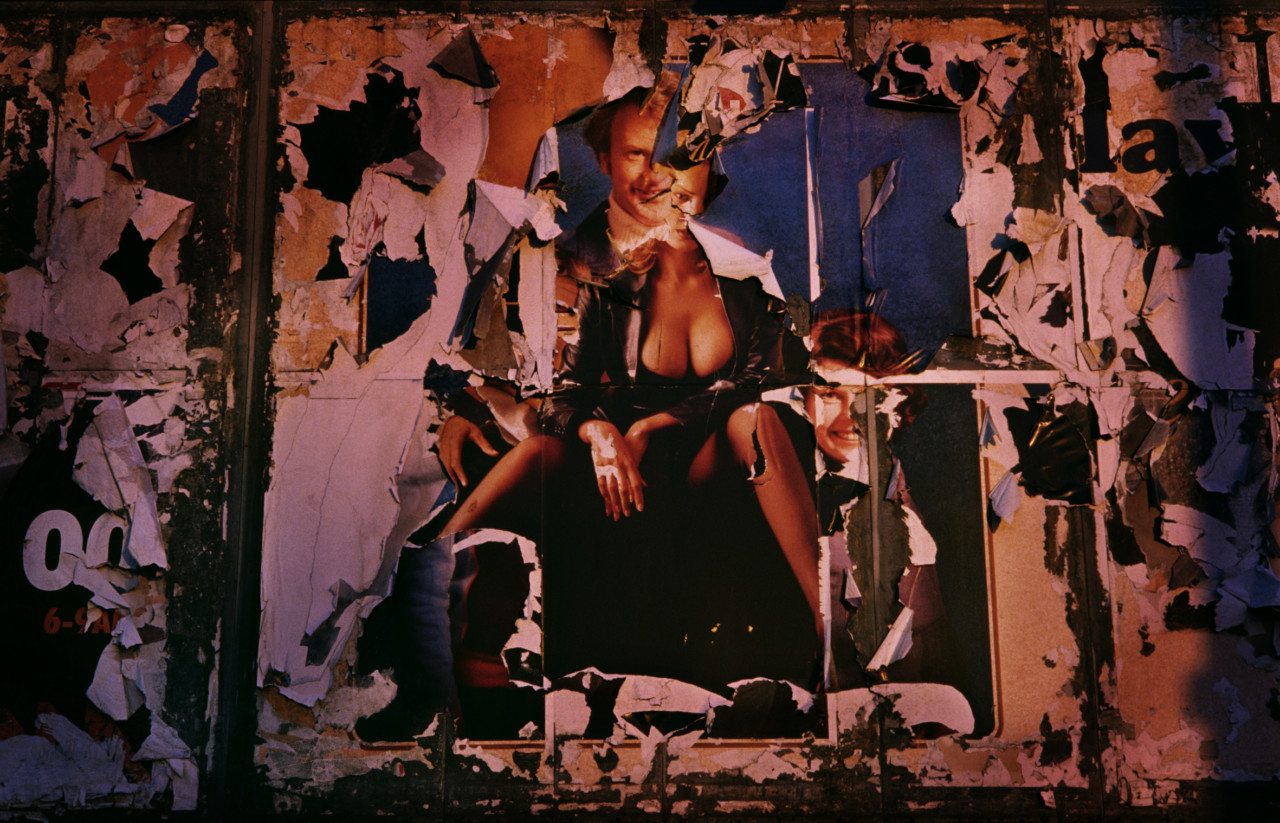 So, there has not been so much time for reflection or a “great pause” as some are describing this moment. Like most artists, Parke feels he and Autio are led more by chance and coincidence, than any master plan. As he explains, “one thing leads to the next. I was recently invited to accompany Steve Waugh to India to help him with a book project, and this in turn made me curious about the work I shot there almost 25 years ago. This then led to a particular thread and it keeps opening up other ideas.” They have done some work in their archives over this time, necessitated in part by a newly invigorated Instagram account where they have shown Parke’s original cricket work alongside other projects. In reality, with such busy lives, they continue to work from one project to the next, something Parke doesn’t think will change post-coronavirus: “As artists we are always working in isolation, and because we work on our own projects with limited interaction, I actually don’t think it will change the way we work at all”. Nevertheless, in the empty streets of his 365 project, he senses the impact of the pandemic on the mood of work already underway.

Parke will be sharing regular updates of his work on Magnum Flow, a photographer-initiated project and platform which allows the Magnum collective’s members to share both contemporary and historical work relating to world-changing events, in near-real-time. 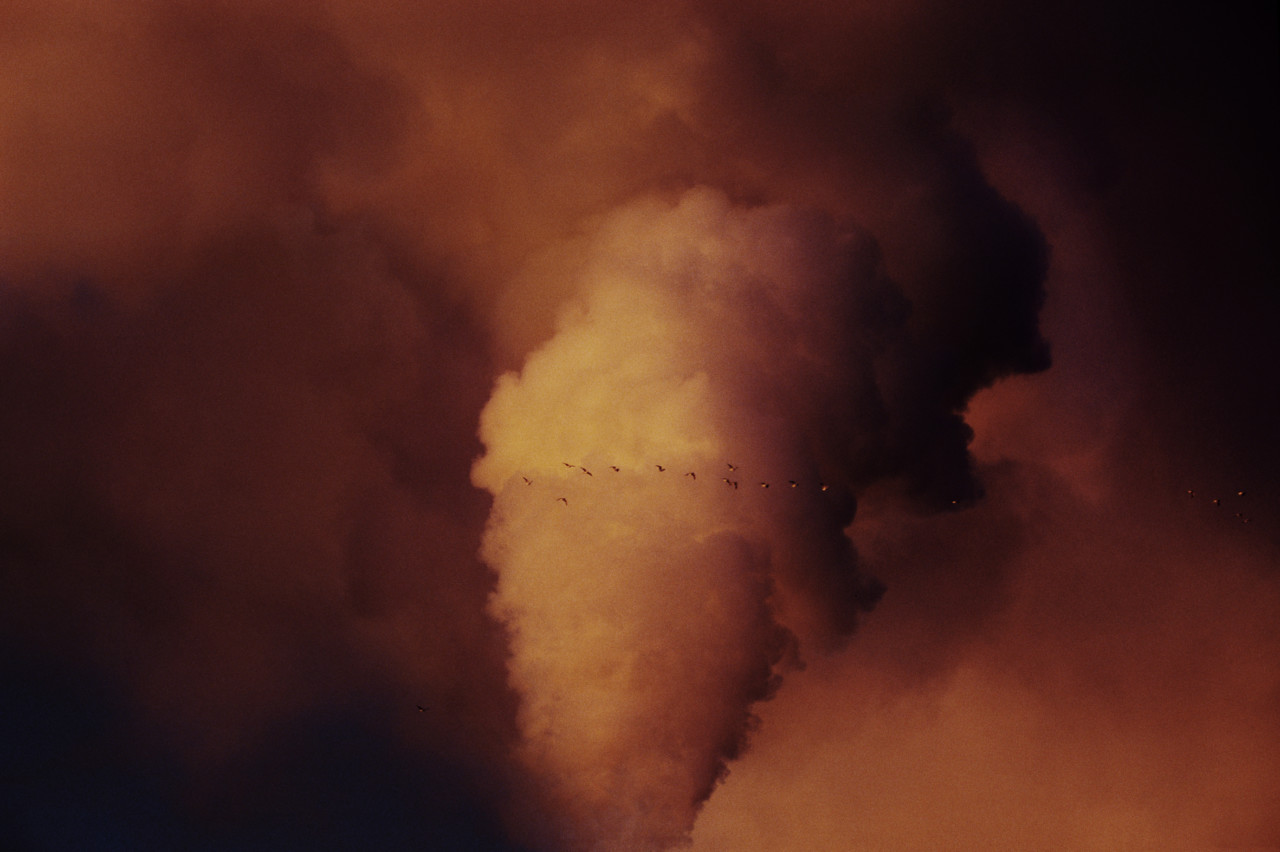