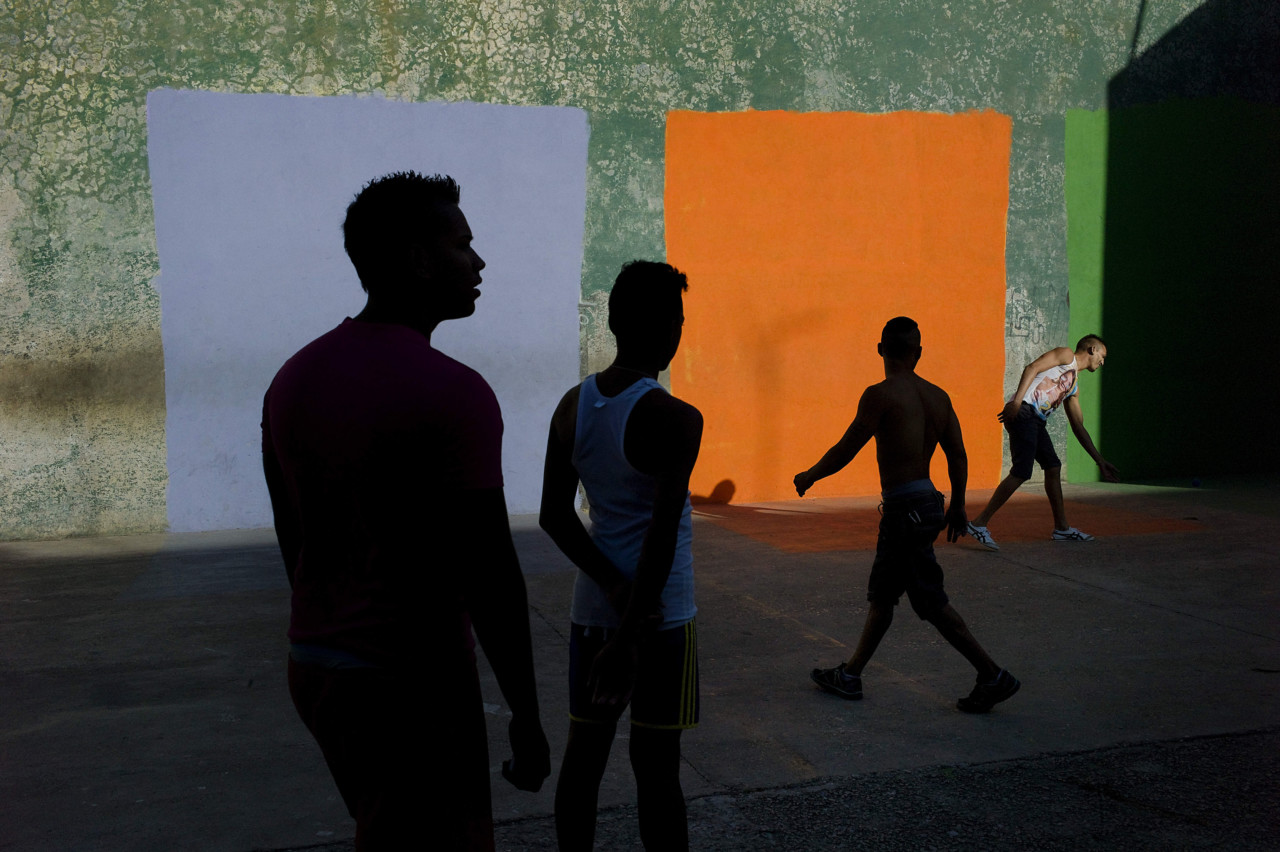 Nikos Economopoulos’ early career saw him working in black and white, photographing traveller communities and displaced peoples of his native Greece and its neighboring nations, before working extensively photographing in and around the former Yugoslavia. The latter body of work became his 1995 book, In the Balkans. Later, Economopoulos turned toward color images, travelling further afield to make new work, with Cuba being a key location for his ongoing project – On the Road – from 2013 onward. Here, the photographer discusses the allure of Cuba, the societal echoes of his native Peloponnese he finds there, and the joy of mysterious images.

The lead image in this article (above) is now available – for the first time ever – as a limited edition 8×10″ Magnum stamped print. You can see all images available in this new collection here, and learn more about the 8X10″ Magnum Editions prints here, on the Magnum Shop. 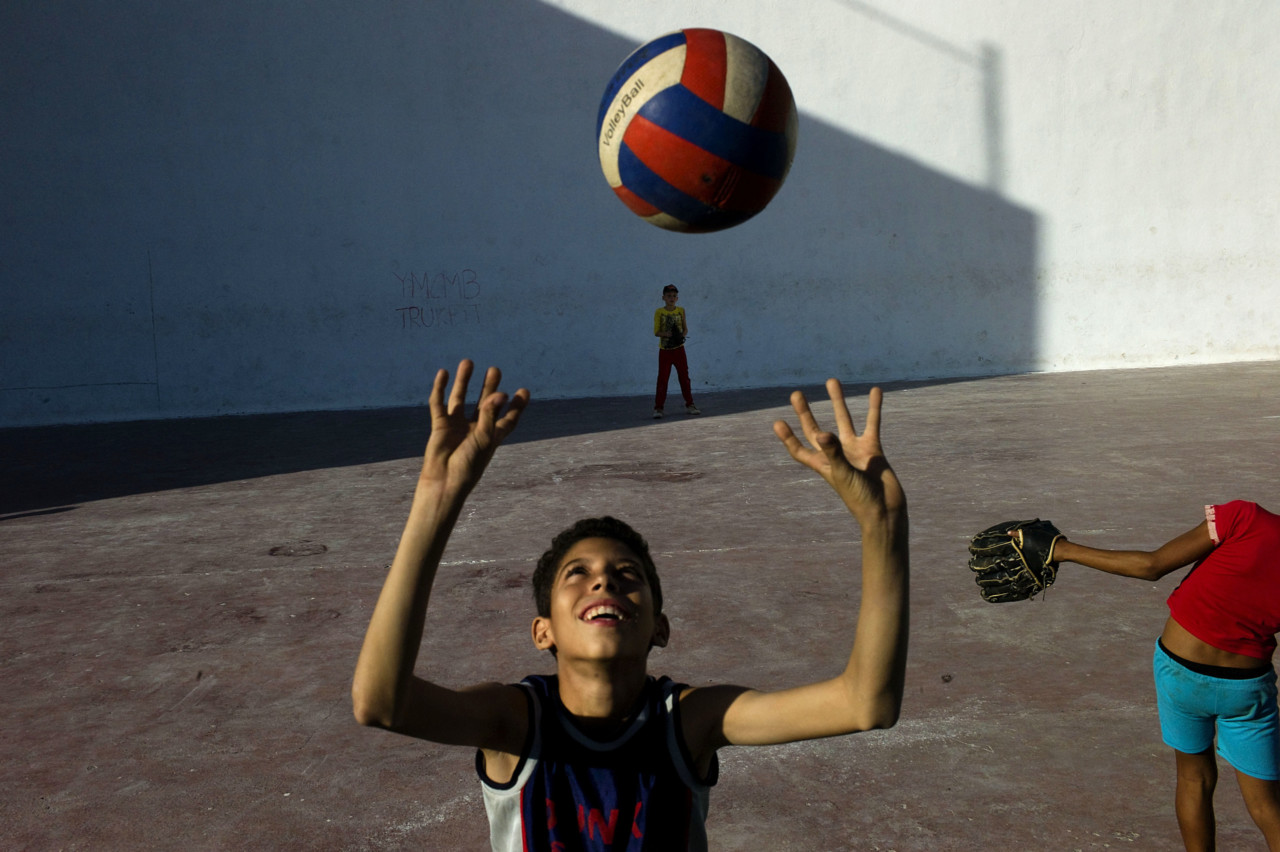 What was it that first attracted you to Cuba, as a place to make new work?

There is a sense of familiarity with Latin America for someone coming from Southern Europe. There must be something – which perhaps you could call: ‘a culture of the South’. There are many differences, between these places of course, but also many similarities – the two have so much in common. There is a resemblance of scale too: Cuba is of approximately the same size as my own country. In a way, being there is reminiscent of my own childhood. I think it has to do with inner processes, or a common undercurrent, but also with the ways in which social life flows in shared spaces.

I first started photographing in Cuba consistently in 2013, a time of transition for me which had been unfolding over a long while. What captivated me was not so much the ways in which the country was vested with meaning: the concept of utopia that it stood for, and subsequent tribulations and disillusionments: as I kept going back, I realized that what actually inspired me was the interaction among its people, the ways in which they shared and connected, creating spaces where one doesn’t feel like a stranger. This warmth is omnipresent around South America in general of course, but there are a range of factors, including the lack of criminality, that make Cuba even more accessible photographically. 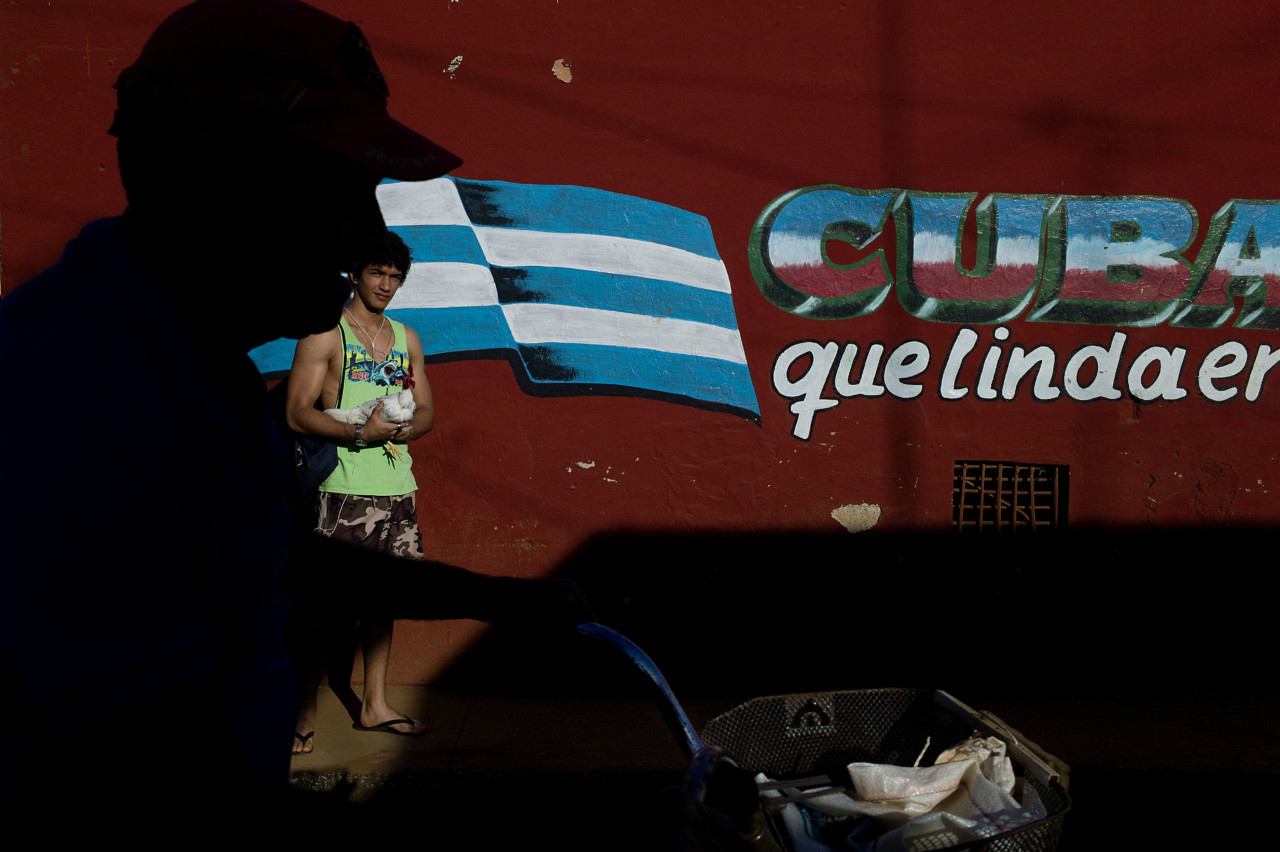 "The ways in which social life unravels in the streets, the lack of boundaries between public and domestic spaces, the ways in which people sit on their steps and engage with one another, watch and chat and gossip and play, all these things are part of my own upbringing" 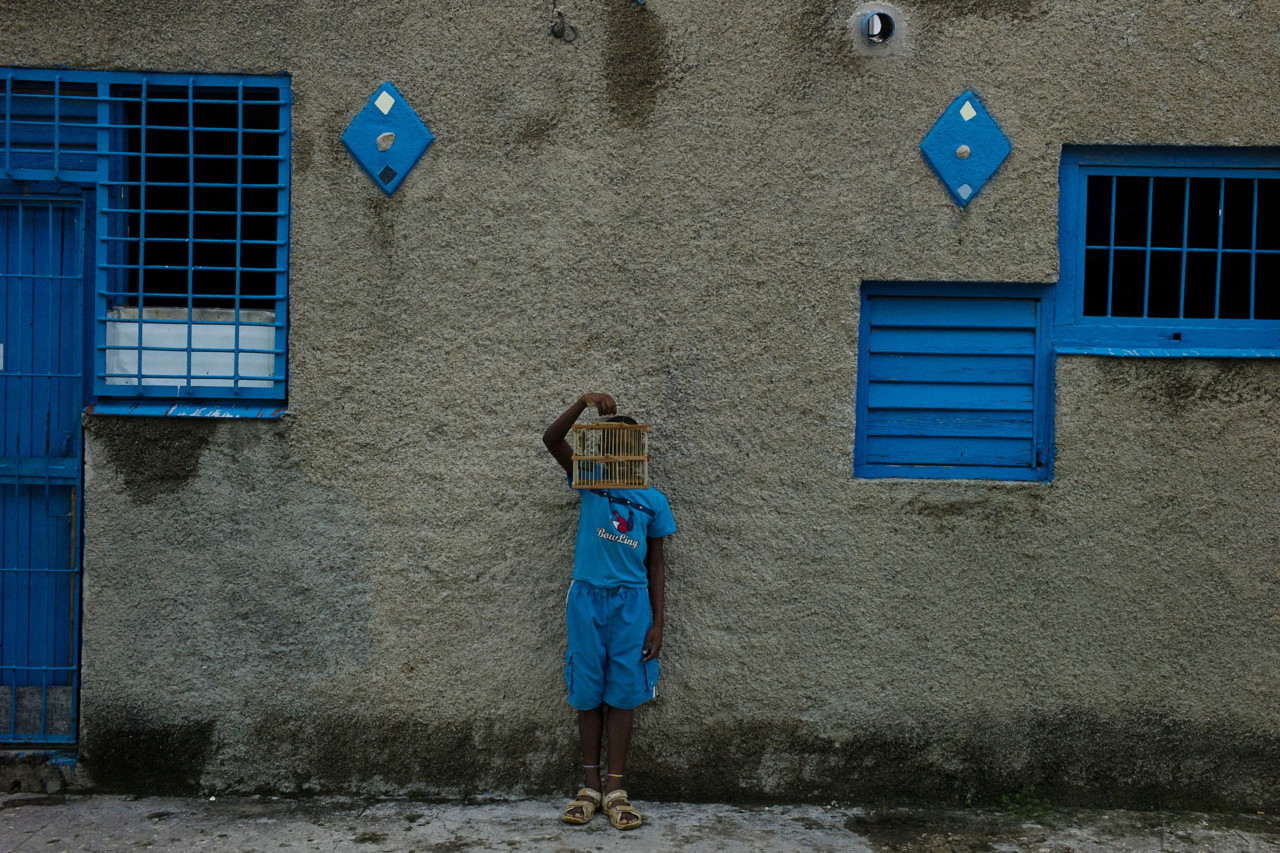 Was there also some interest here with a Cuba in transition, perhaps relating to your work on the Balkans? Or the outsider communities of Greece? Or are those interpersonal relations really the key?

The reason I work in Cuba is similar to the reason I photograph in Turkey: there is a close proximity to my own childhood, not in terms of nostalgia, but in terms of the truth it speaks to me, a process of recognition that takes place, both at the seams of and deep inside a society. The ways in which social life unravels in the streets, the lack of boundaries between public and domestic spaces, the ways in which people sit on their steps and engage with one another, watch, chat, gossip and play – all these things are part of my own upbringing.

It’s a common cultural reference that stems from scarcity, I guess… People didn’t often have options other than to sit out in the street and partake in this simultaneity. There’s an element of stoicism and joy and community in this. And all this ends up creating an abundance. Eastern Europe is very different, harsher, there’s a heavy, agonizing sense of history haunting it, that you feel it almost everywhere. 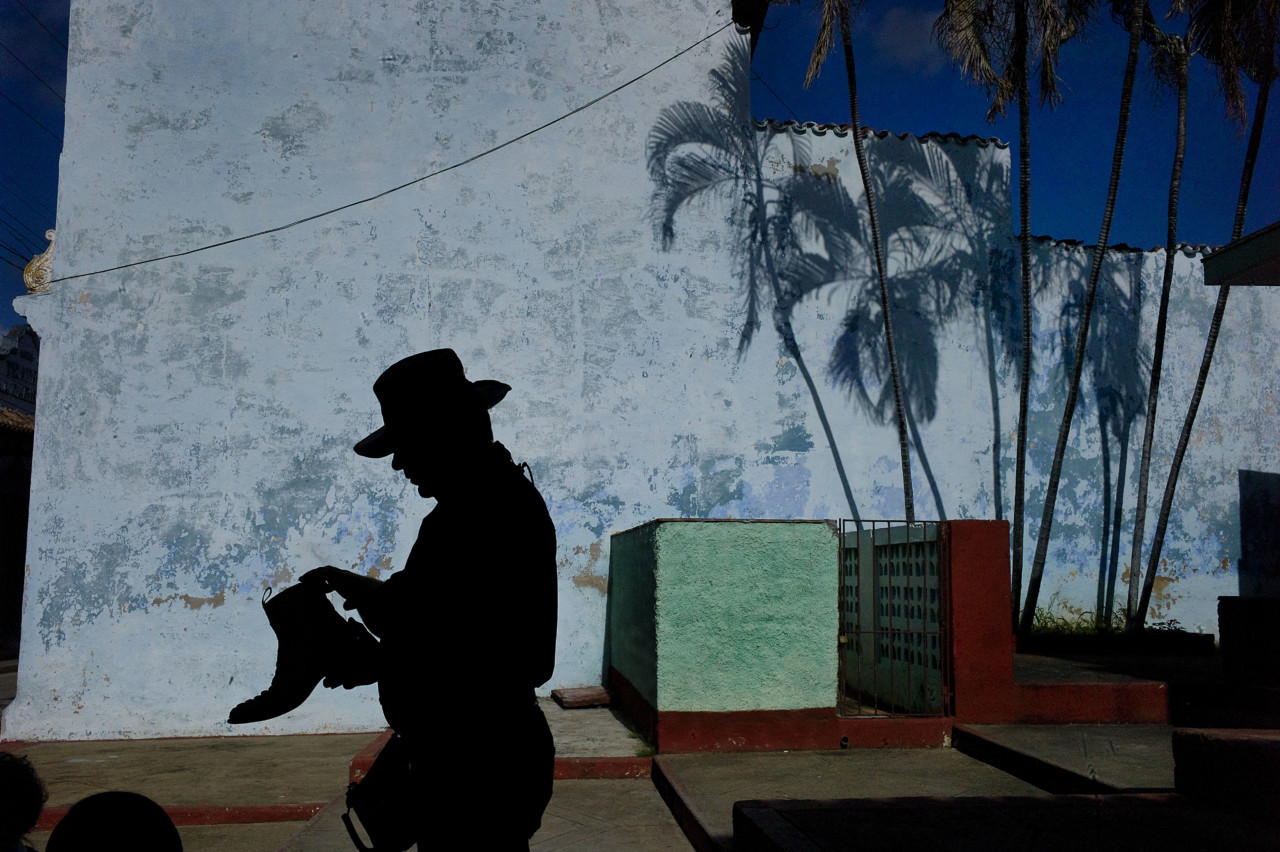 "I like the relation among the silhouettes, the relation between light and shadow, the background iconography, the intensity of the palette" 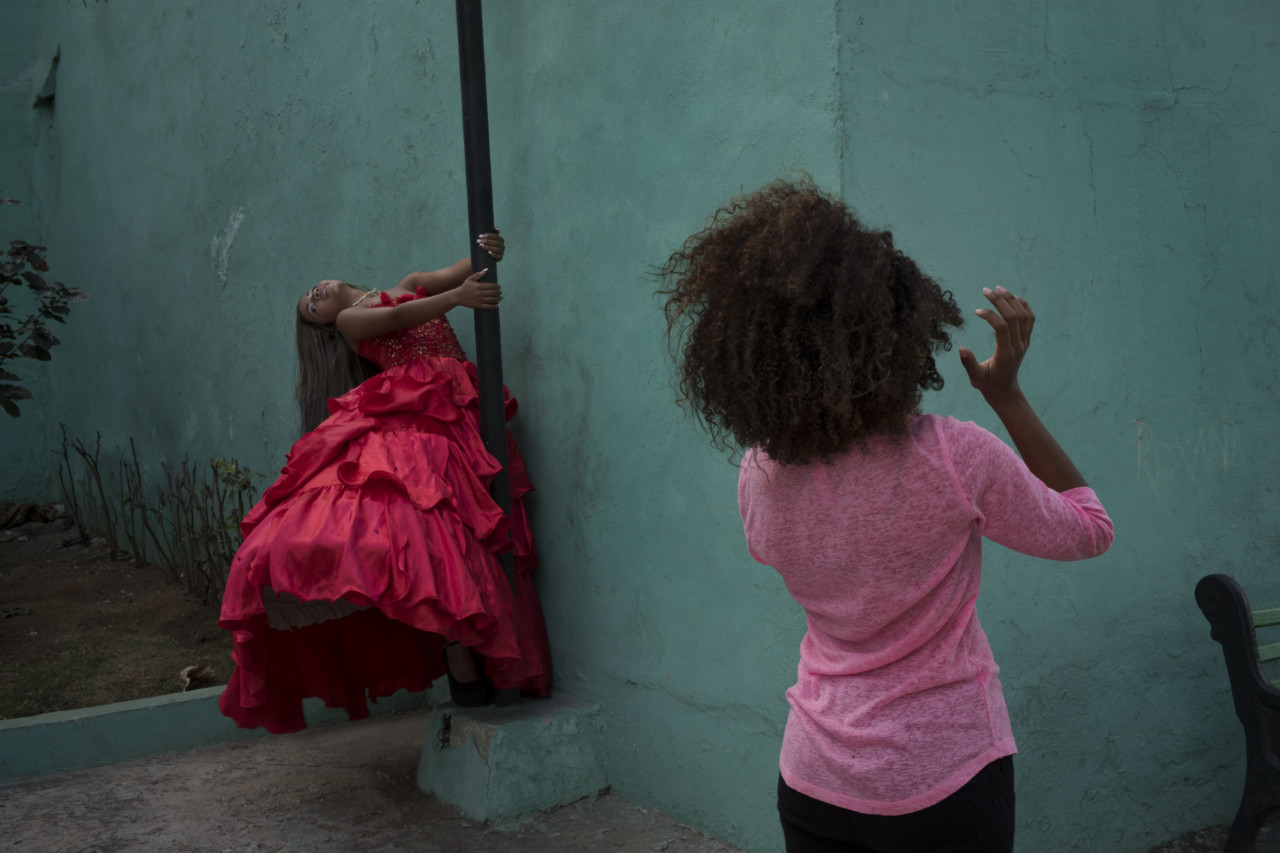 Is there something about Cuba – from a visual or photographic angle – that you find attractive?

The colors, the ways in which lowlights contrast with highlights… but that is of secondary importance for me. What inspires me the most is the human element, the human interaction within that setting.

What exactly is happening in the lead image – who are these figures – and were they aware of your presence?

Yes they were, I had been there for a while. In fact, I had spent a number of afternoons in that neighborhood in Havana – Quatro Caminos. It was more or less the same neighborhood kids playing there most days, and we’d chat casually. They are playing a kind of hand-squash-like game  – I think it’s called pelota or Basque pelota – where they hold the ball in their fist and throw it against the wall.

What is it about this one photograph that makes it stand out from others you made in Cuba – what is it the pleases you most about it?

The absence of the ball: the very object around which the scene revolves – creates a mystical space, a choreography of gestures and postures around an object that is not present. I like the relation of the silhouettes, the relation of light and shadow, the background iconography, the intensity of the palette, the outline of the bodies, but mostly the fact that you don’t perceive exactly what is happening, that the image does not offer a clear answer to the viewer. The presence of an absence. The secret of this image lies in the missing object and how it nods to the viewer, hinting at the fact that knowing, per se, doesn’t really matter.

Instead, the image takes a bite of reality, setting it apart, creating a still from a ceaseless flow, something that transcends a certain context and renders it with a meaning that stands beyond the reality it depicts. 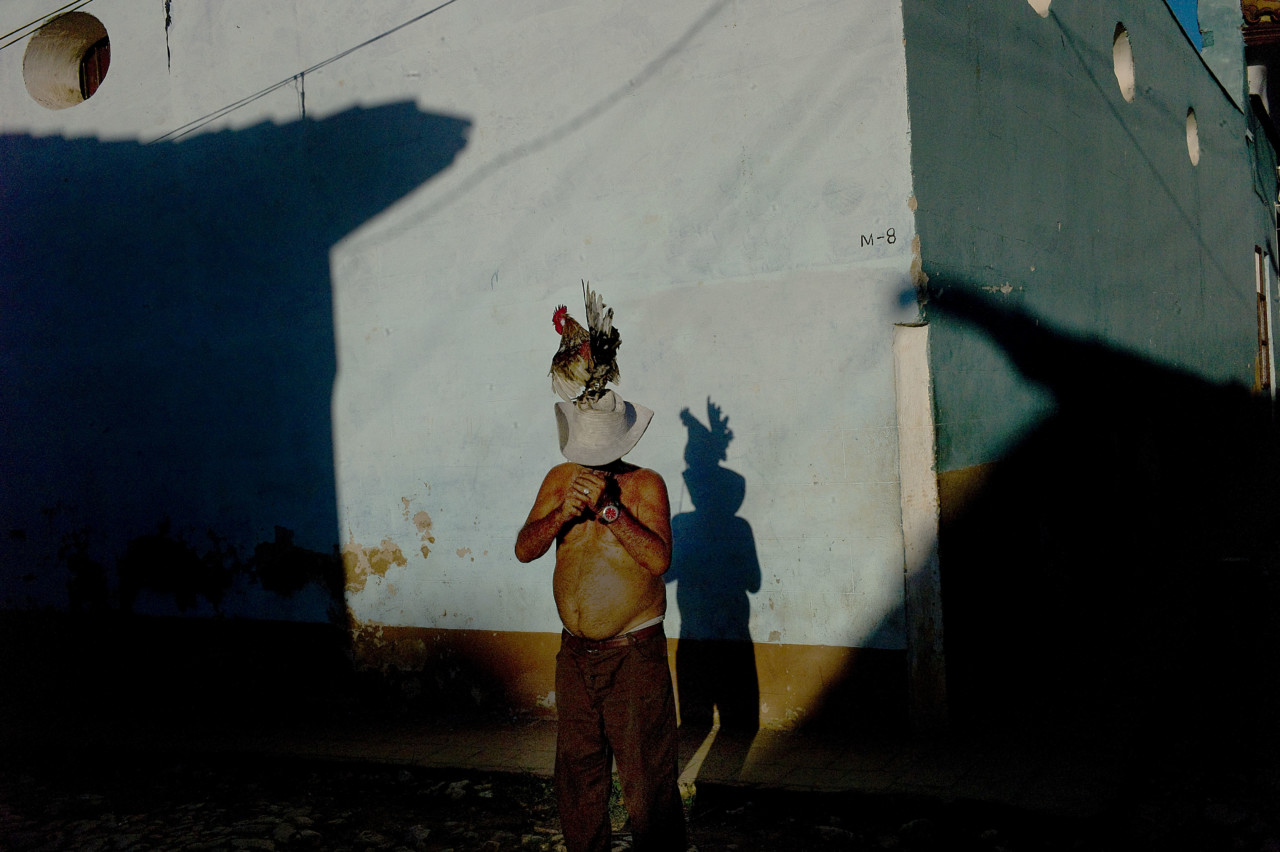 "Black and white transcends reality by removing a very significant part of it: color. Its simplicity and deductive character allow for abstraction... Color is more realistic. To get the same outcome, the same contrasts and tensions, the same sense of intensity is more complicated" 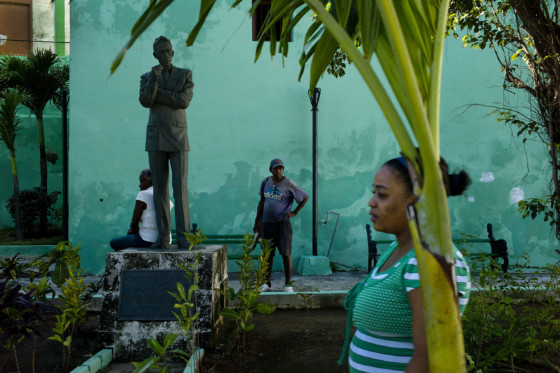 We have interviewed you before about many of your black and white projects, but what was it that first made you want to make more work in color? What can be conveyed to a viewer in color that cannot be in black and white?

Black and white transcends reality by removing a very significant part of it: the color. Its simplicity and deductive character allow for abstraction. It was also cheaper to print. I always used black and white with analog film and only started using color after switching to digital.

Color is more realistic. To get the same outcome, the same contrasts and tensions, the same sense of intensity is more complicated. It is more challenging because it depicts reality with greater precision. Visual validity there requires a greater effort, it’s not enough to have the right balance of form and content, something which is sufficient in black and white. You are describing reality in greater detail and precision, and therefore run the risk of ending up with something conventional. So, you need to engage other tools, like the quality of light and a sense of balance between colors. In black and white, you can do things with diffused lights, whereas in color the relation between highlights and lowlights is much more interesting. From Black and White, to Color, and Back Again