Following the now famous handshake shared by the leaders of North and South Korea, Thomas Dworzak went to Namyangju Studio to witness the cross over between a social media craze, historical reenactment, and his ongoing war-games work 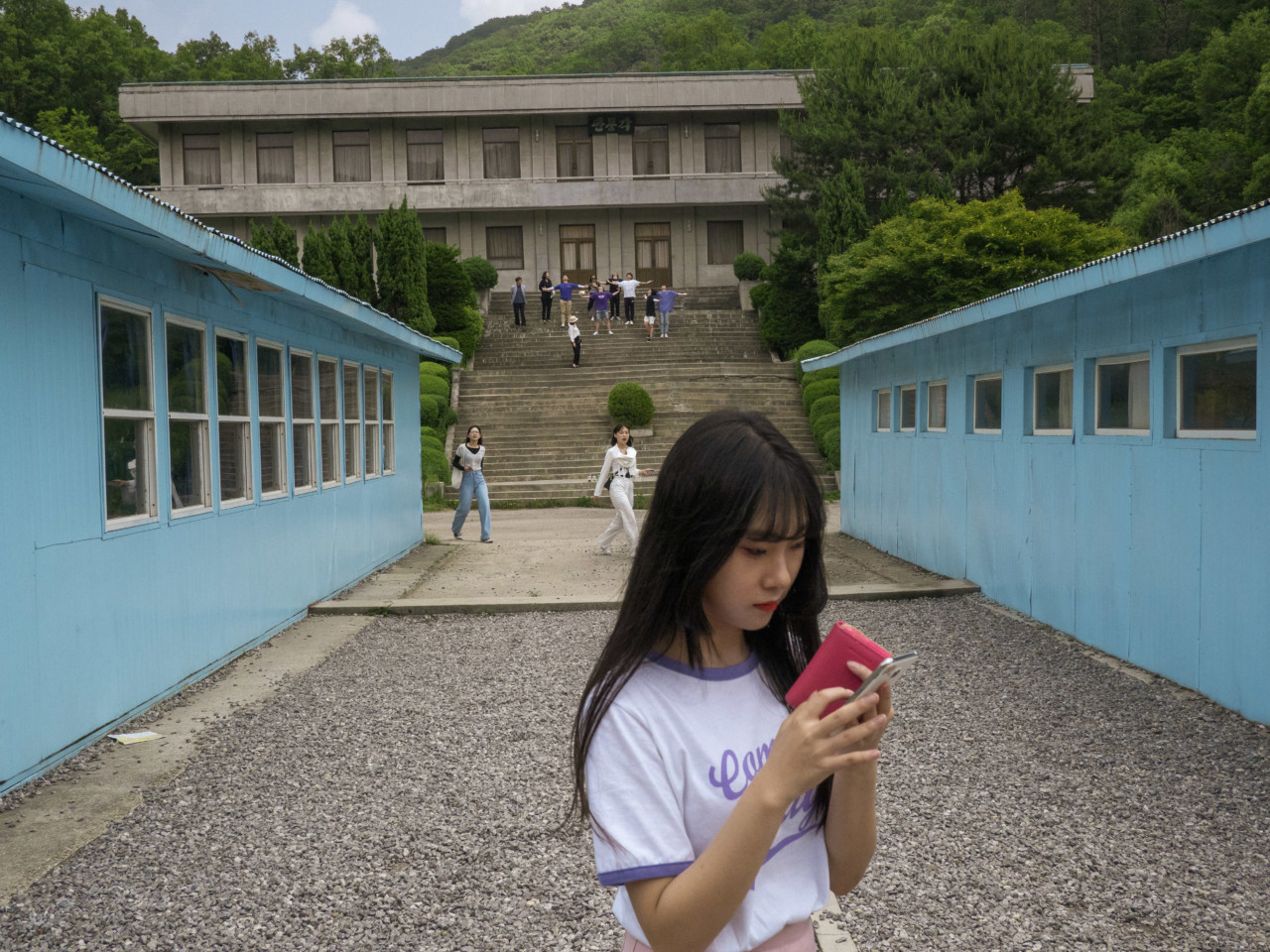 On 27 April, 2018, Moon Jae-in and Kim Jong-un, the leaders of South and North Korea, met in the infamous Joint Security Area.  The JSA is the only point on the 160-mile-long militarised border between the two countries where their respective armed forces stand face to face, rather than being separated by a demilitarised no-man’s-land. The site’s famous blue nissen huts offer one of the only neutral locations where representatives of the two Koreas can negotiate.

Long a focal point for tension in the uneasy truce that has followed the Korean War’s indecisive end in 1950, the April meeting in the JSA caused a sensation with it’s unusual air of affability. The two leaders shook hands over the concrete curb-line marking the border, smiled, and accepted gifts before planting a commemorative tree together.

With the meeting quickly hailed by some as a historic breakthrough in pan-Korean relations, photos of visits to a replica of the JSA at Namyangju Studios, South Korea, started cropping up on Instagram, with visitors aping the handshake for posterity, as well as for their social media accounts. 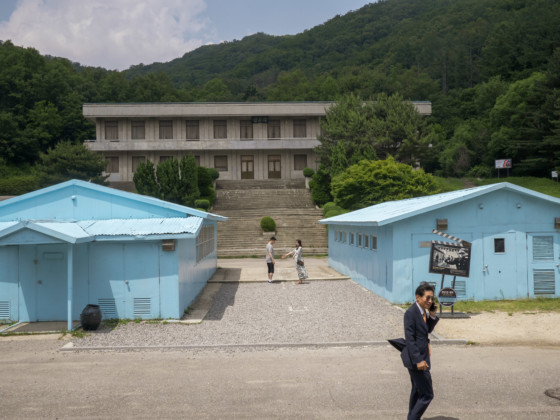 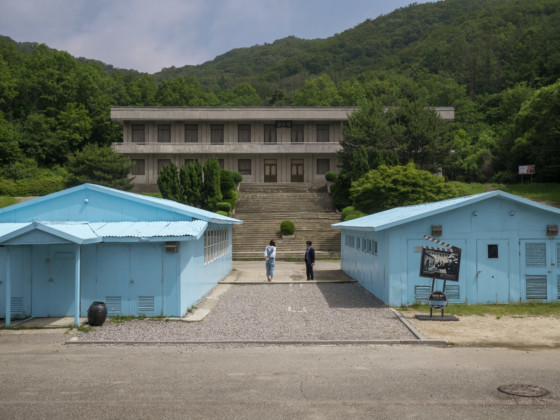 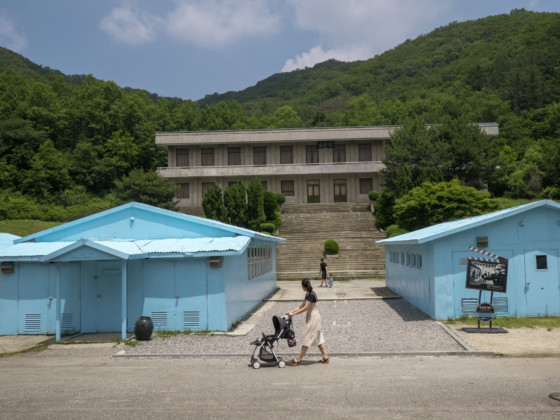 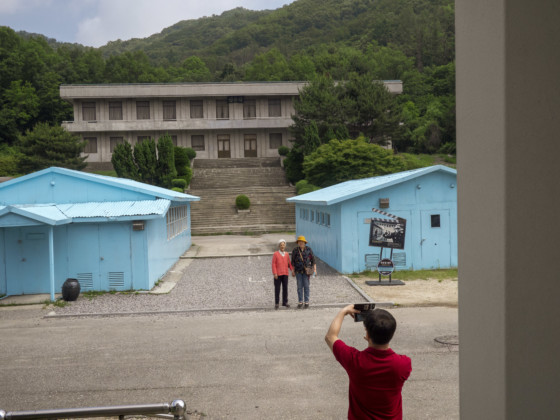 Thomas Dworzak went to Namyangju to visit the set and to witness this trend in progress – a surreal crossover of varied longstanding themes in his work : war games, reenactments, and social media’s effect on society and photography.

In spite of the generally jovial atmosphere Dworzak observed – with cycle groups, young couples and school trips all taking the seemingly obligatory handshake photo – there was also a sense of sobriety, ‘I do think there was this moment, with some visitors, when they got there and were like, ‘Oh my god! This is the real thing!’ To them [the JSA is] such a symbol, such a big deal.’ 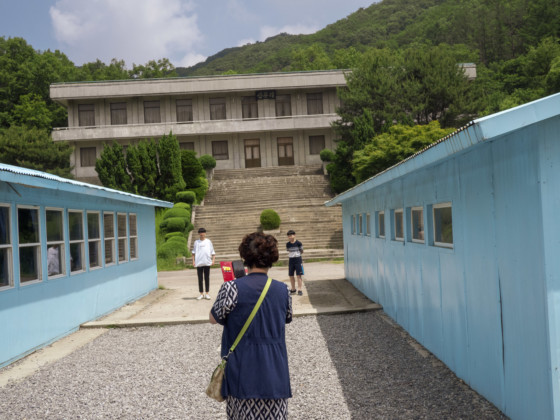 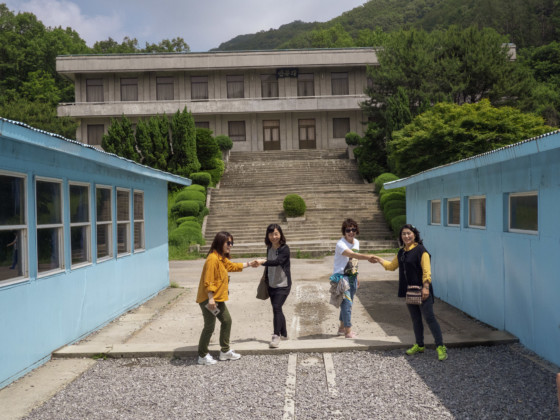 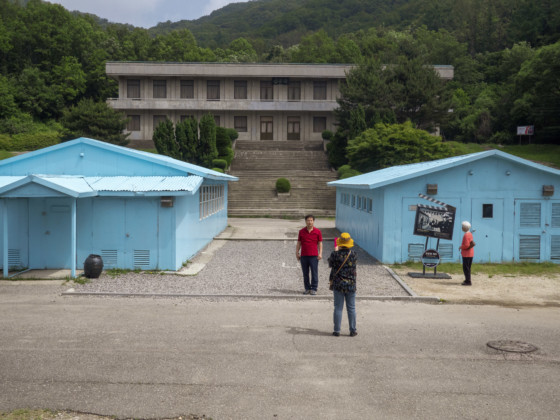 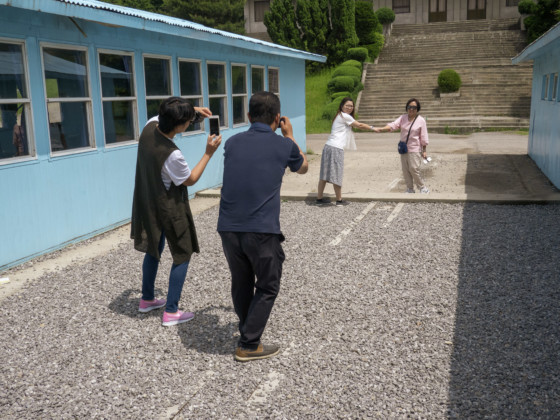 ‘I saw something on TV, I think, about a father who took his children to the set. He had never told them that he was actually from North Korea, but he felt this was the time and place to do so. For some people, taking these photos had an almost ceremonial air.’

The realism of the set lent weight even to the lighthearted act of recreation, Dworzak explained, ‘It’s not as abstracted here as it is in some places, its not like some Pirates of the Caribbean theme-park landscape. Here you go into a replica of a place that is still relevant, and is still there. It’s all made more eerie because it looks so much like the real place, just without all the soldiers.’

The very idea of taking photographs is, for Dworzak, loaded in the context of the JSA, ‘I first went to the actual Joint Security Area with the Georgian president and the issue of photography is very weird there. The president put on sunglasses and a baseball cap because the North Koreans would always be taking photos of the Southern side of the border, trying to get photos they could use for propaganda – you know, an American looking fat, or stupid.’  He recalls that the North Koreans would be provocative, ‘banging on the windows of the blue huts and very aggressively taking photos of everyone with SLRs.’

Dworzak’s ongoing work on war games focuses on the intersection of reality and theatrics – and for him the scenes at Namyangju Studios tied into his fascination around reenactments, where ‘the fake has become more visible than the real’. Specifically here, at the movie set JSA, where this notion of recreation and the reappropriation of a historical event was bizarrely fresh in historical terms, ‘Usually it’s years after an event, that people make a park or amusement or event around it, you don’t usually get the ‘fake’ as quickly as this.’

"It's not like some Pirates of the Caribbean theme-park landscape. Here you go into a replica of a place that is still relevant" 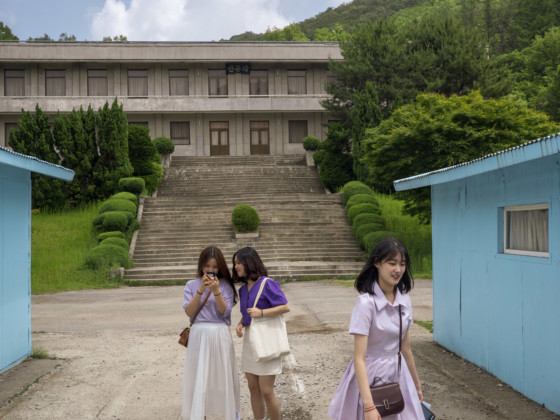 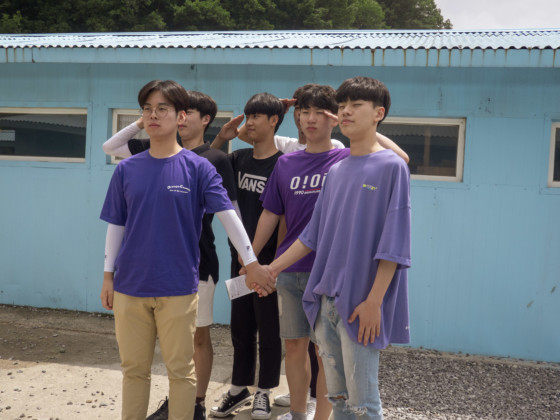 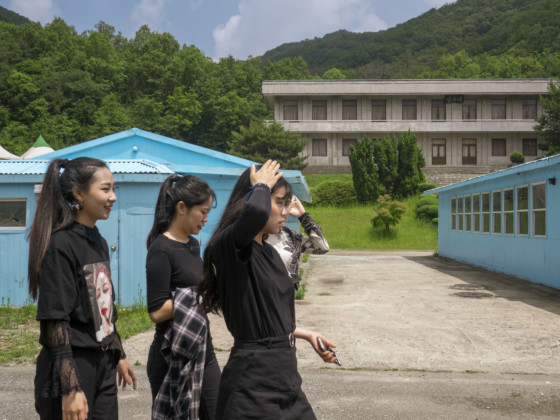 But while there were areas of cross-over, Dworzak was quick to point out that the scenes at the fake JSA did not share friction or uneasiness with projects he has worked on that one might think were similar.

‘Its not like it’s a replica gulag. What I find interesting is when people go to concentration camps, or sites of real horror, and how that combines with tourism. When you are in Cambodia, touts come up to you and the first thing they say is ‘do you want a girl’, then it’s a boy, smack, or to visit the genocide museum. This not like that, I don’t think.’

Dworzak’s work on Pokémon Go is another project which one might expect to dovetail with this social media driven phenomenon. His work on the game highlighted not only the strangely drone-like behaviour of stumbling figures following their phones, but also the awkwardness of the Pokémon Go algorithm having sent players to the scenes of terror attacks and famous war memorials. ‘I am interested in that friction. I am interested in school trips to Auschwitz, for example. It’s a very strange thing. And I am not talking about people who are assholes who want to go to these places and cause trouble, I mean good kids, people stuck between being impressed, confused, and sad and being 16 on a school trip and in love.’

The fake JSA however felt to Dworzak more innocent, ‘They came to see it, and of course they took selfies. I have reenactments in my work, and I have military training. But this felt really different. I hadn’t seen this before, it’s not really war tourism, or reenactment, it’s not really a film set, but it’s not a park… It’s just there. Maybe there’s no more to it than that…” 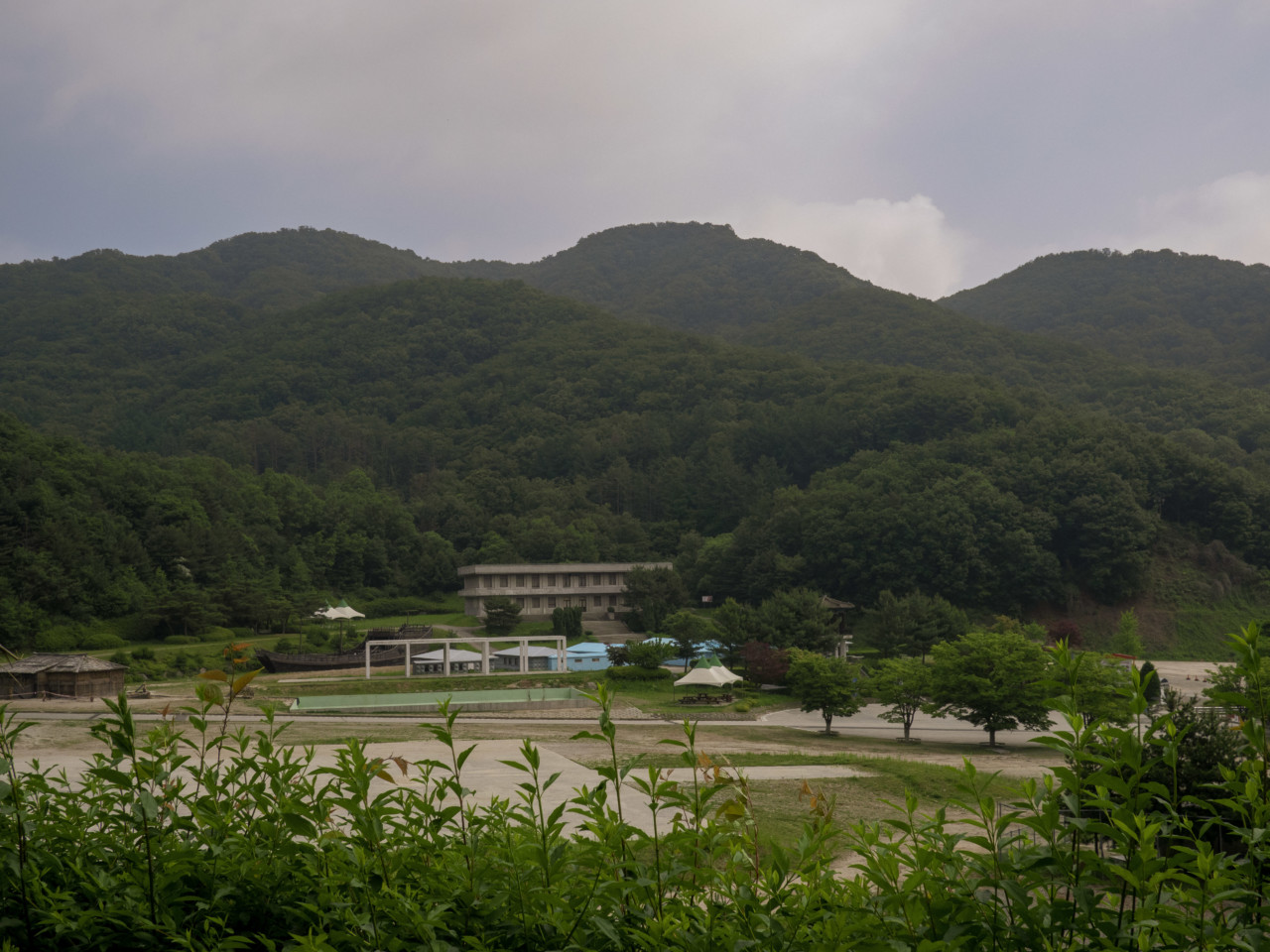 The Korean War: Behind the Battlefront