Photographs of ordinary and yet extraordinary life in the last communist state from an ideological, political and cultural perspective 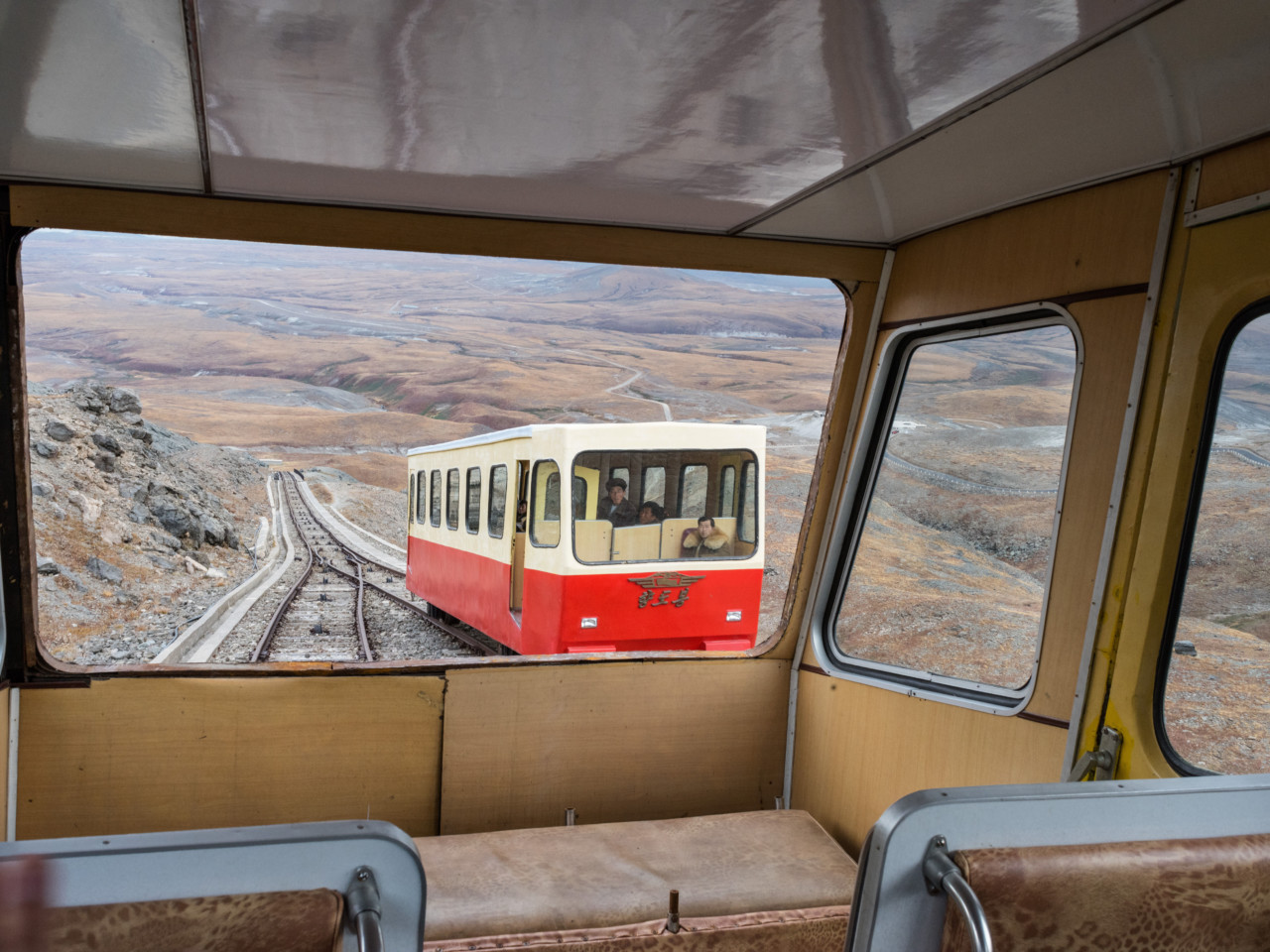 North Korea may be the most enigmatic country in the world. With access for foreign media and tourists very restricted, glimpses of life in the last communist state from an ideological, political and cultural perspective in the world are rare and highly controlled. Nevertheless, Carl De Keyzer managed to spend 60 days during 4 trips in 2015 and 2017 crossing the breadth of the country known officially as the Democratic People’s Republic of Korea.

Given almost unprecedented access, the Magnum photographer documented over 200 locations which his travel agent Koryo Tours took him to as their photographer. He photographed the orderly architecture of tourist landmarks, state monuments, social spaces, and schools; the intimacies of private homes; and the stunning natural landscapes of the country, many of which had never been captured on camera before. Upon the publication of his book D.P.R. Korea Grand Tour (which contains 256 images of North Korea), we speak to De Keyzer about what it was like to make the work in one of the most mysterious countries in the world. 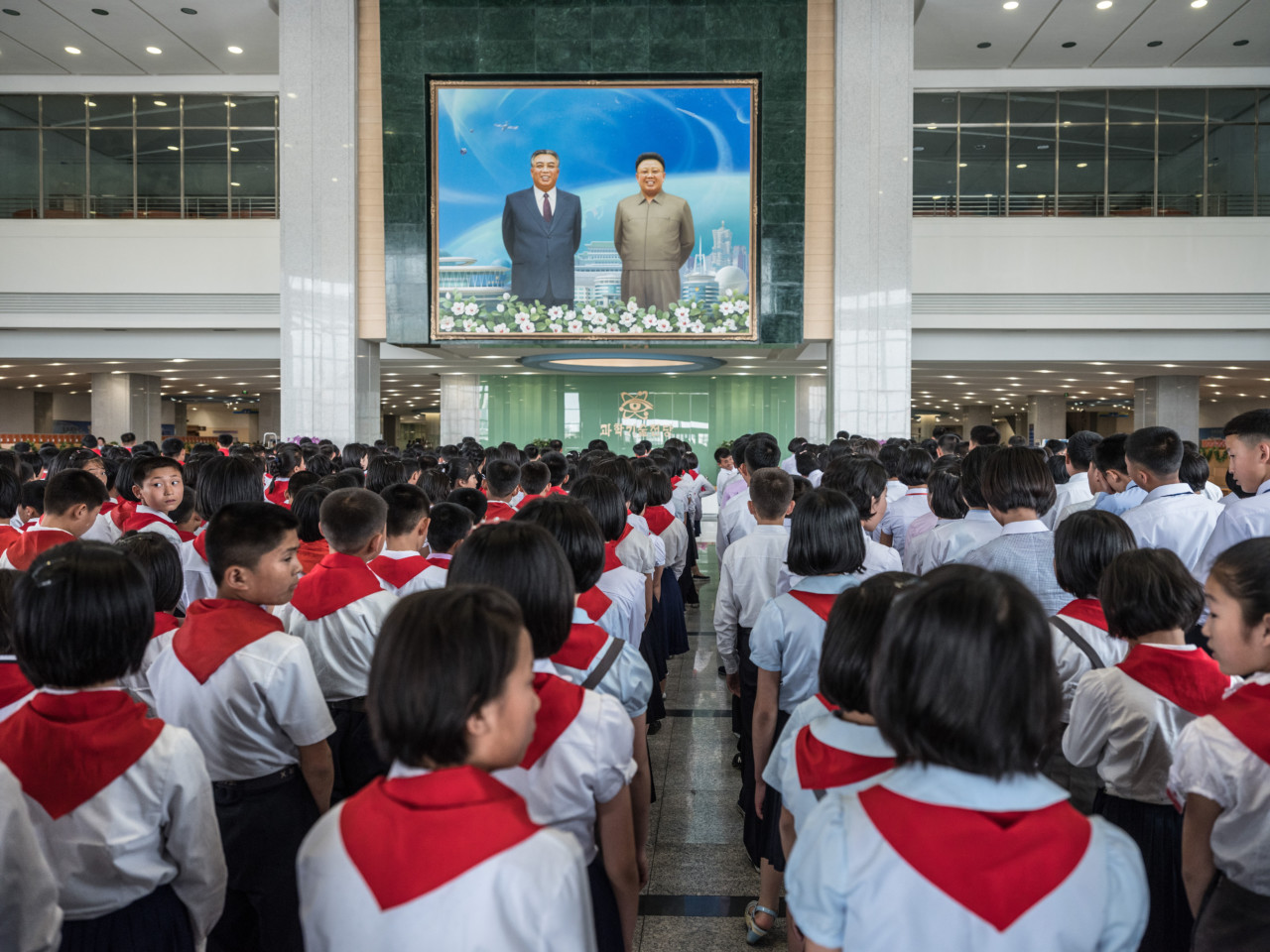 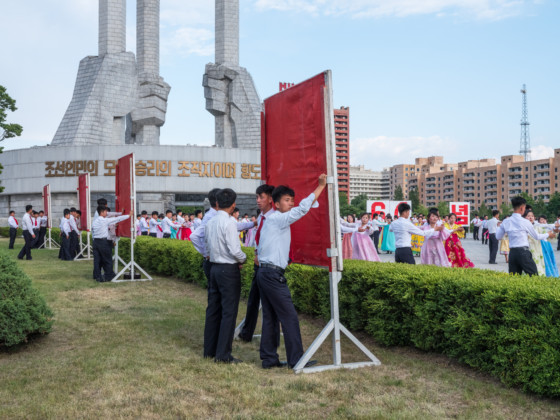 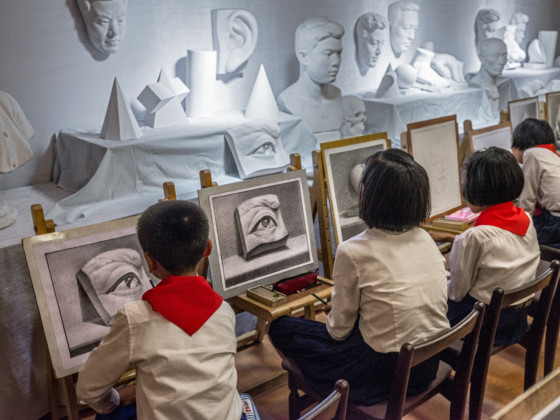 Grand Tour is just an idea. Like a fictitious travel guide. There was no ‘tour’. Koryo told me there were about 250 places a foreigner was allowed to visit. Of course nobody ever did. I asked to visit all 250 places, even the most uninteresting ones or the most remote. Finally, I visited about 220 because some visits were cancelled at the last minute. On my last trip some were added, such as the 3 churches in Pyongyang. 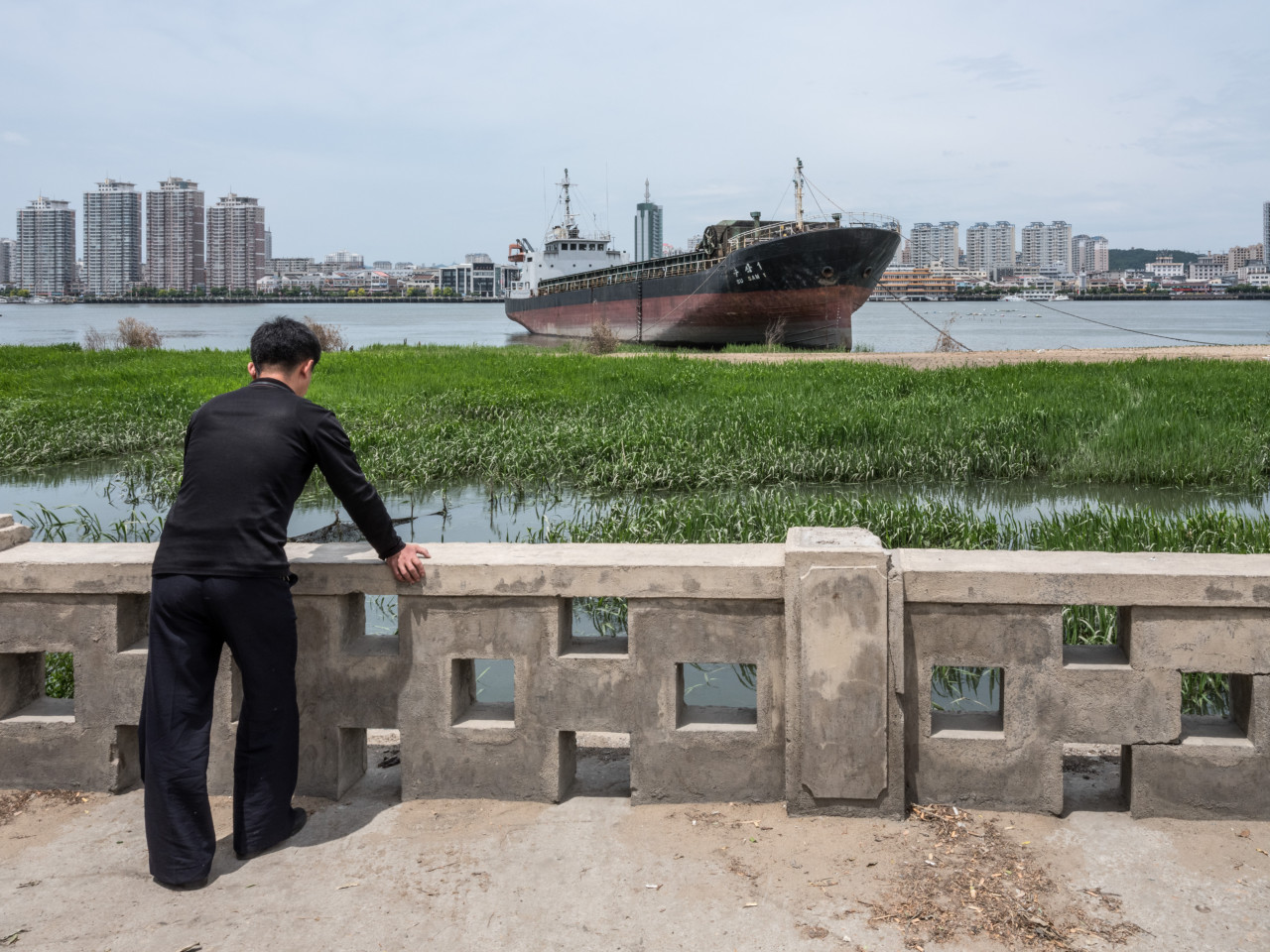 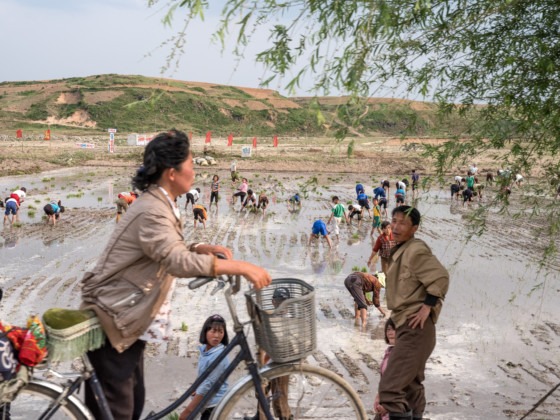 Carl De Keyzer Farm children transplant rice seedlings into a paddy field in the spring; Chonsam-ri Cooperative Farm, Kangwon Province. Rice transplanting is a major annual task and city dwellers are called upon (...)
to provide supplemental labour during one of the busiest times of the year on the farm. DPR Korea. © Carl De Keyzer | Magnum Photos
License | 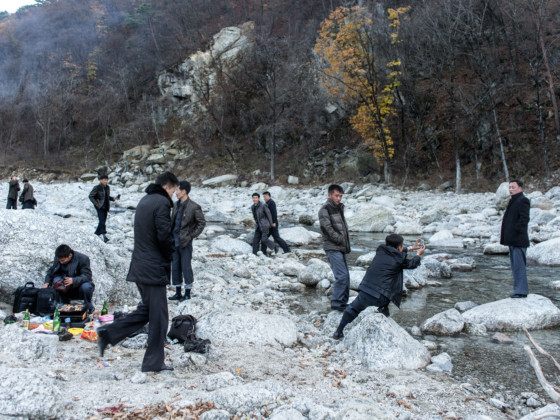 How controlled where the situations?

I was brought from A to B by two guides, mostly young women, in a minivan with a driver. When we arrived there was usually a speech by a local guide, to be translated, and after all that there was very little time to take pictures. A lot of places were ‘no photography’ as well, even the most propagandistic ones like the Army museum in Pyongyang.

I was not allowed to take even one step on my own. Never to leave the hotel. I tried to make as many images as I could, even the ones that were not allowed. The guides knew that at the end I had to submit all images anyway.

"A lot of places were ‘no photography’
"

To my great surprise of the 400 images submitted only three were refused. Even the ones with soldiers, buildings with scaffolding, people without permission, the countryside, which were all nos from the beginning. I tried to use every single opportunity I got without upsetting the guides too much. After all I wanted to finish my ‘tour’. 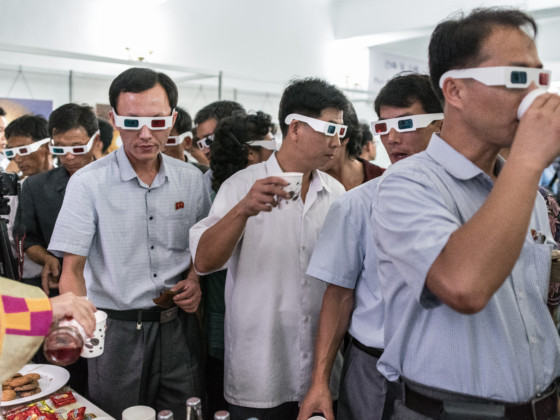 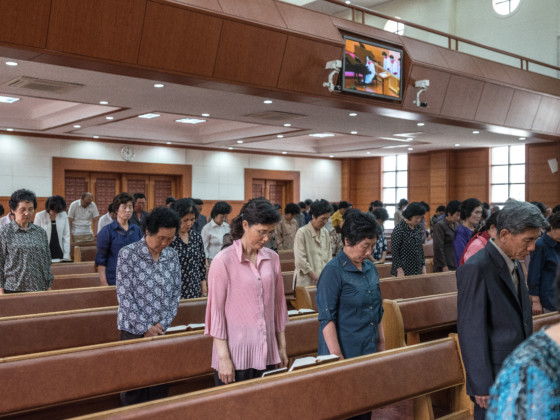 Carl De Keyzer Worshipers pray at Bongsu Protestant Church, Pyongyang. European, American, and Canadian missionaries introduced Protestant Christianity to Korea in the 19th century, where it took root, especially (...)
in the northern half of the peninsula. Prior to 1945, Pyongyang had the second-largest Christian population of any city in East Asia, after only Manila. Many of today’s Christians are the descendents of prominent merchant and intellectual families who were involved in nationalist activities against Japanese rule during the colonial period, and, for this reason, are allowed to continue their family traditions in the predominately atheist DPRK. Pyongyang, DPR Korea. © Carl De Keyzer | Magnum Photos
License | 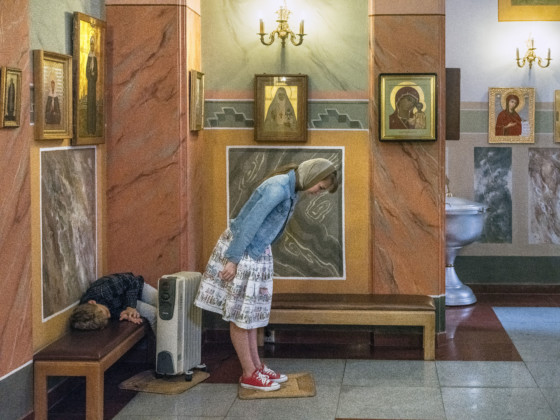 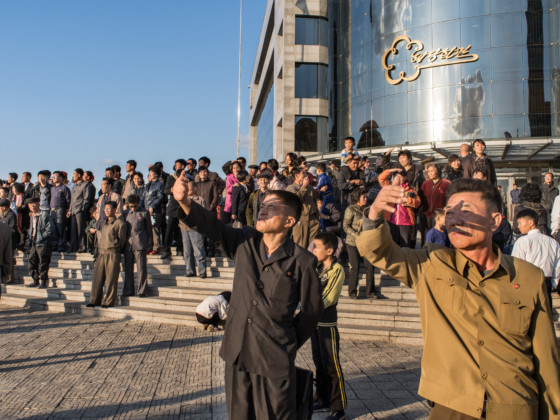 Carl De Keyzer Air force planes fly by, locals wait by the side of the street in Pyongyang to see the forces involved in a military parade. The sleek building in the background is a luxury restaurant and recreat (...)
ion complex with branches overseas. Pyongyang, DPR Korea. © Carl De Keyzer | Magnum Photos
License | 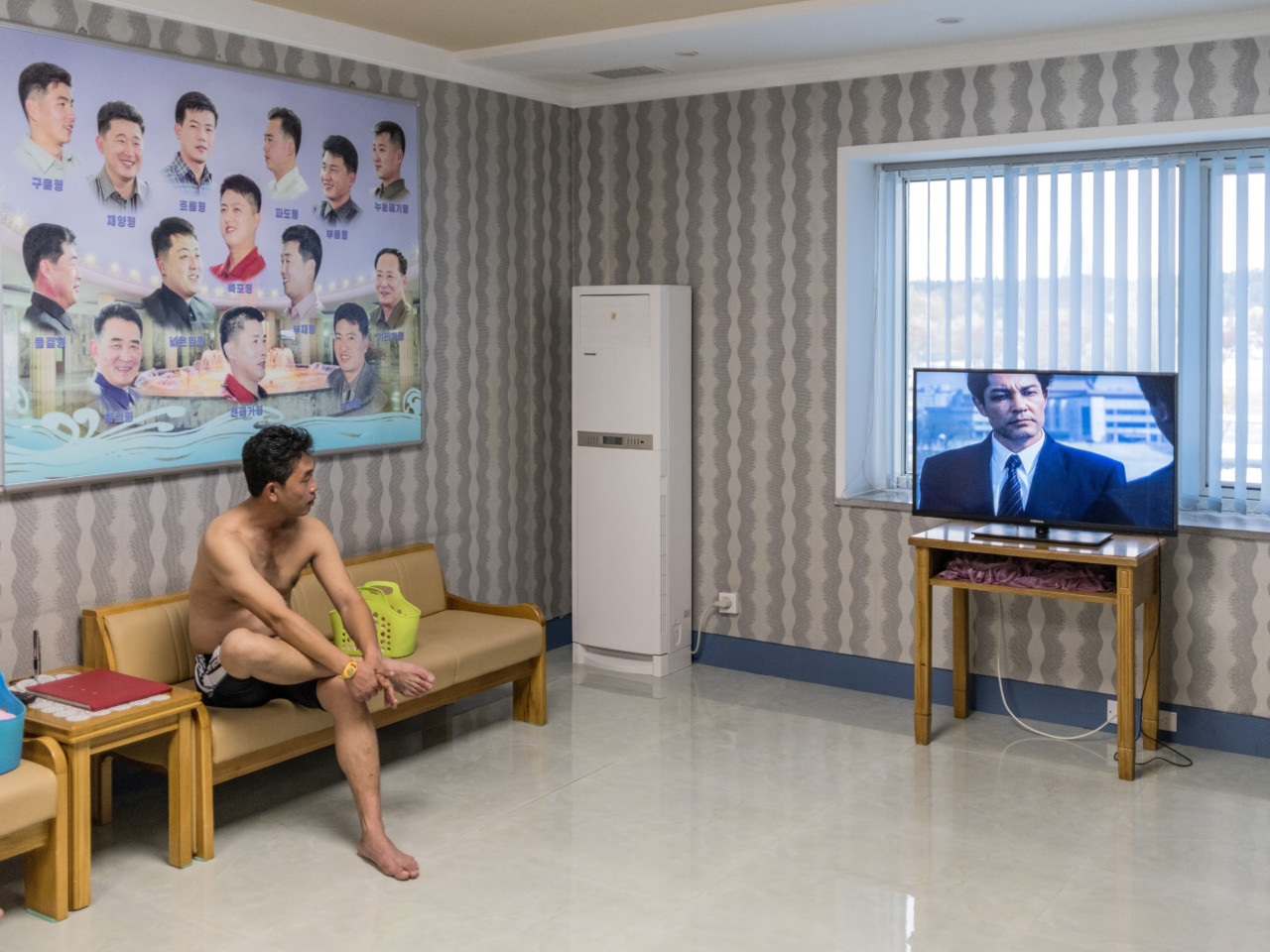 It looked very much like the life in the Soviet Union during the eighties when I was there for my Homo Sovieticus book. Other than that I can’t tell. 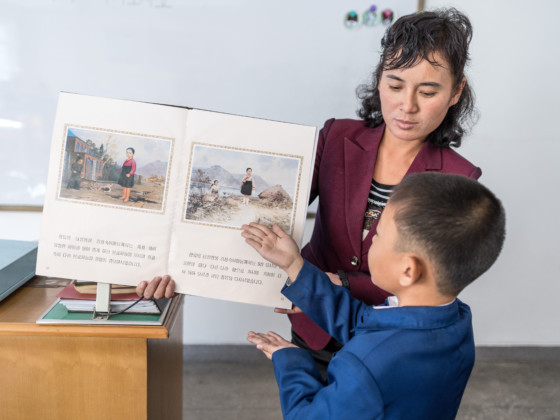 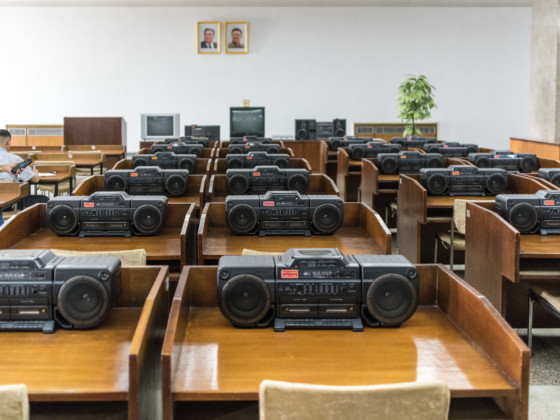 Carl De Keyzer Audio-visual room at the Grand People’s Study House, Pyongyang. The small red placard on each audio set indicates that it was a gift from one of the Korean leaders to the facility. The room contain (...)
s a collection of Korean and foreign music, for listening, as well as pianos, for practice. Pyongyang, DPR Korea. © Carl De Keyzer | Magnum Photos
License | 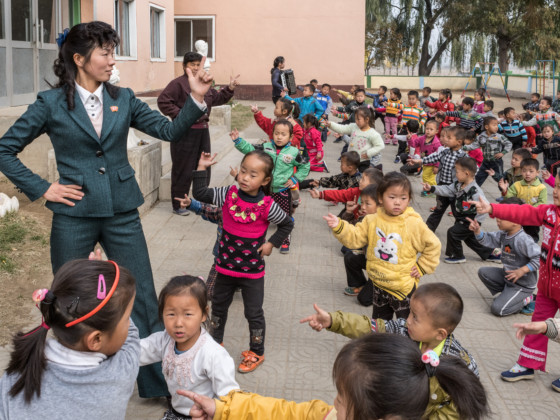 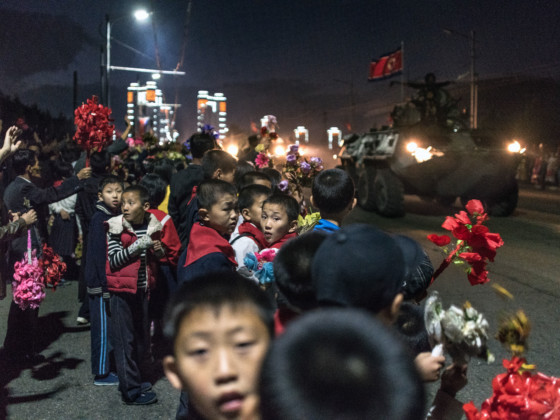 Do you think that it is even possible to build an accurate picture of ordinary life in North Korea or were your experiences too controlled to tell?

Nobody really knows, I guess. There was no contact with locals, only with the guides. You can get more information once you’re outside the country. I was happy to visit the entire country, probably for the first time. More was not possible. 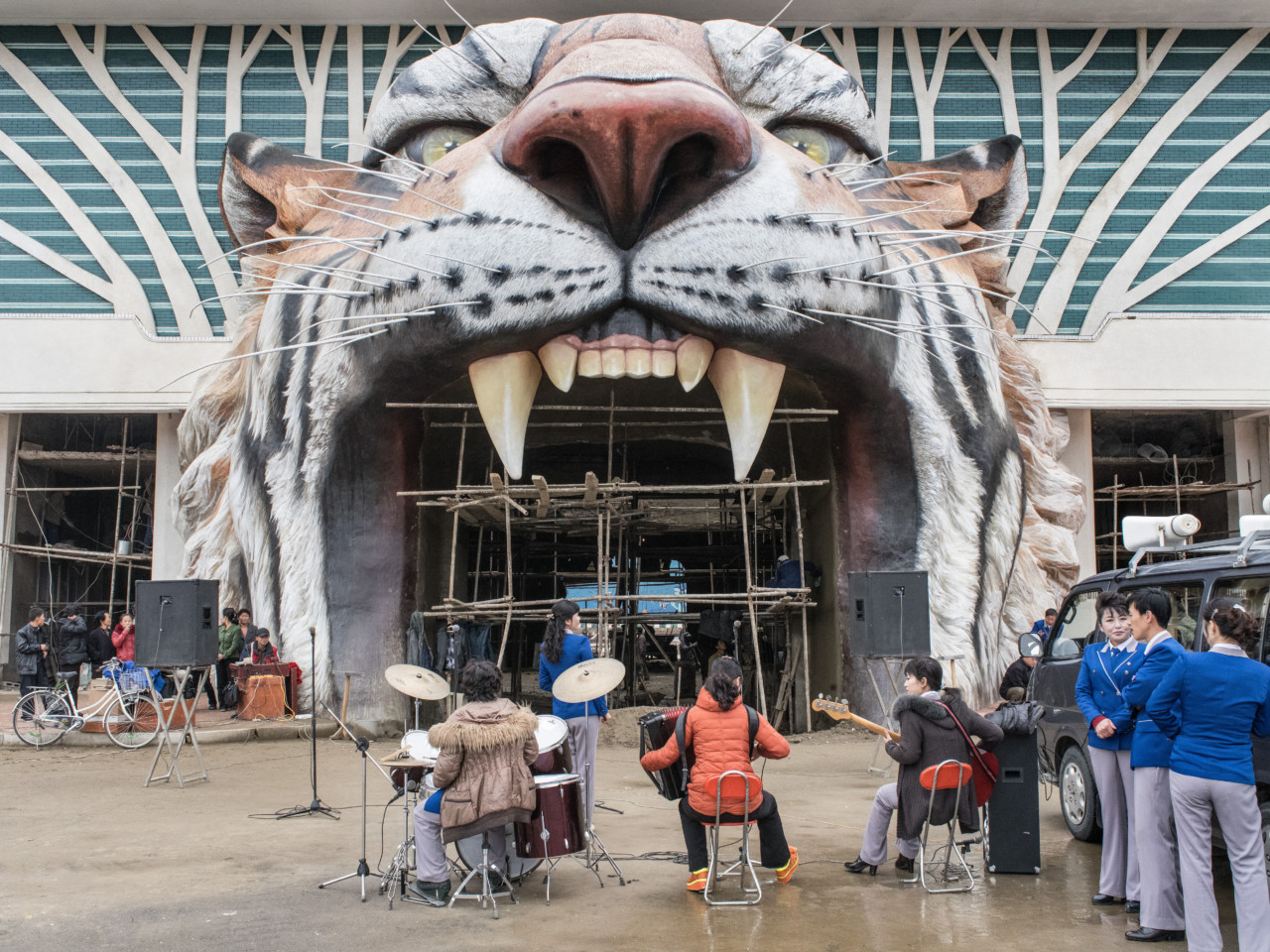 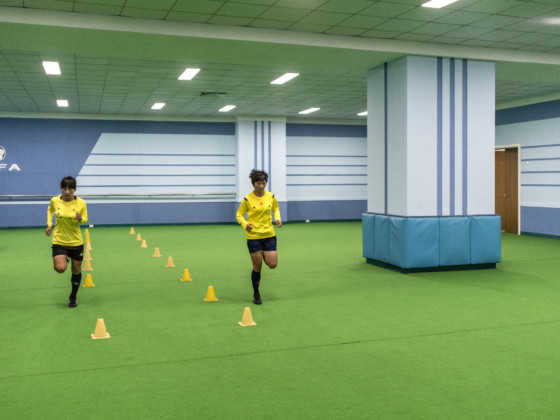 Carl De Keyzer Warm-up room inside of the May Day Stadium, Pyongyang. The stadium was once home to the Arirang Mass Games, an enormous choreographed show, with over 100,000 participants depicting the revolutionar (...)
y history of Korea. The stadium was recently converted to accommodate a variety of football, track and field events. DPRK vs Philippines soccer match for women. Pyongyang, DPR Korea. © Carl De Keyzer | Magnum Photos
License | 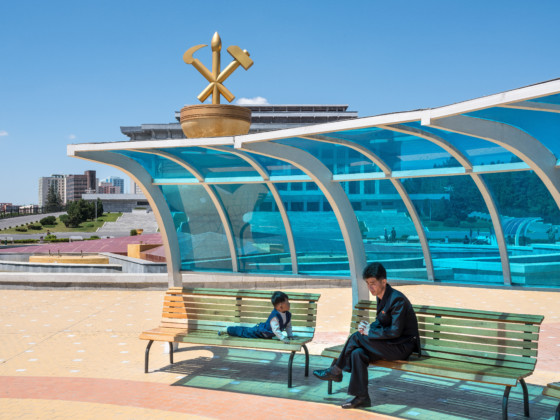 Carl De Keyzer Father and son sit down for a rest in front of the April 25th House of Culture; Pyongyang. April 25th is the founding date of the Korean People’s Army, and the enormous structure is used for import (...)
ant military and political meetings, as well as performances. Pyongyang, DPR Korea. © Carl De Keyzer | Magnum Photos
License |

Was there anything you’d like to have seen but didn’t?

There were places I couldn’t visit or photograph that looked very interesting in my opinion, such as the ‘International Friendship Museum’, where all the presents from all the heads of state are shown, or the Palace of the Sun were the mausolea or mausoleums of the former leaders are, and the Army Museum. I saw a lot of very interesting situations and places but was not allowed to photograph or we were too distant to photograph. We crossed a lot of villages where we couldn’t stop or where I was not even allowed to shoot from the window. 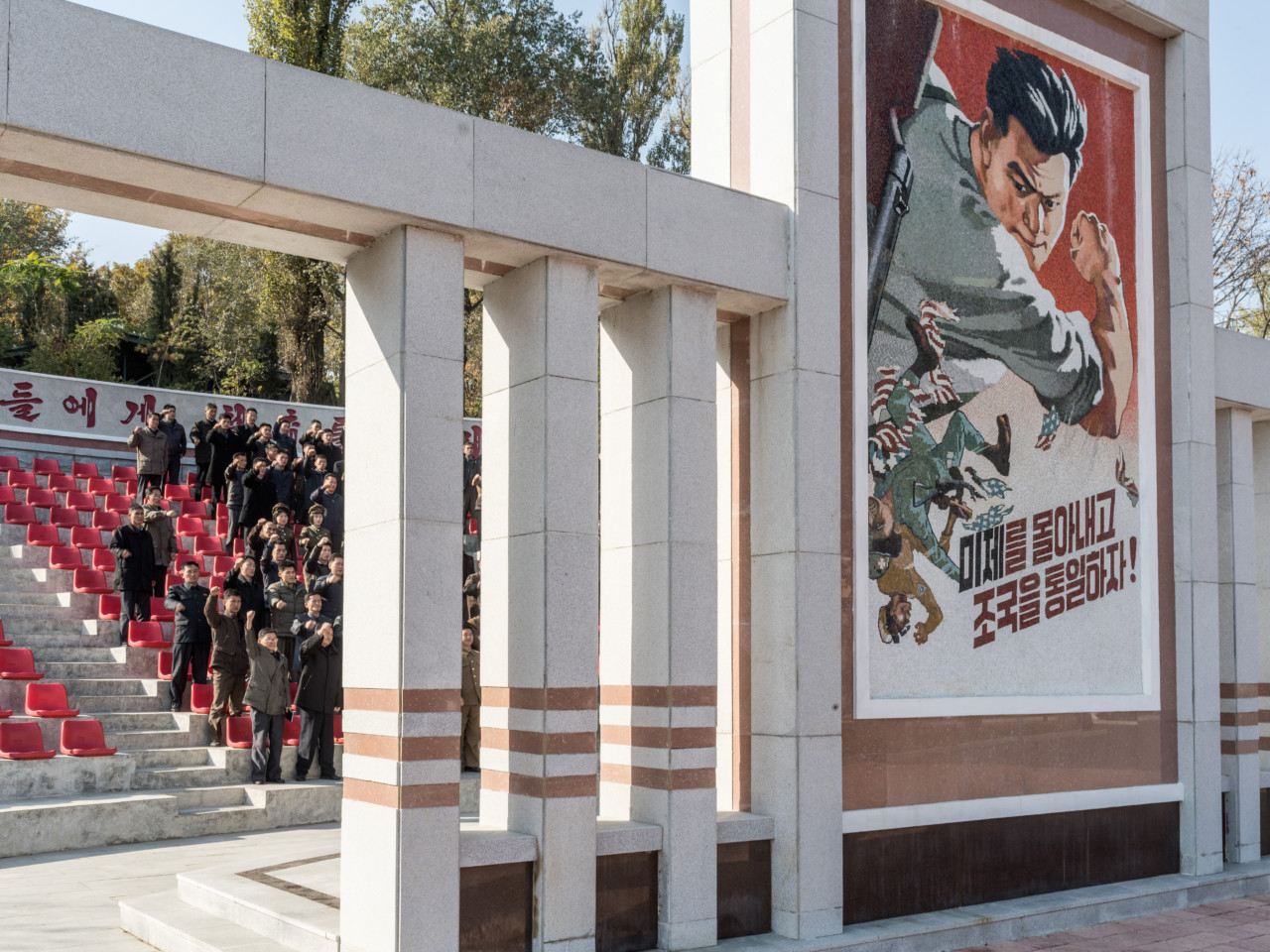 How did the picture you saw of North Korea compare with how you see the country portrayed in western media?

There is a lot of western propaganda as well. We like to see DPRK as the next big enemy, if only to sell papers and media. I could be wrong of course, there is a decent amount of manipulation going on with visitors but I would say that a lot of information is exaggerated.

How does the design of the book echo the content within it?

The book is designed like a communist bible. The double leporello design is inspired by old Buddhist writings that are often presented in accordion books – Korea used to be Buddhist.

The paper I used in the book is the same type of paper used for Chinese advertising you receive in the mailbox – a reference to propaganda. 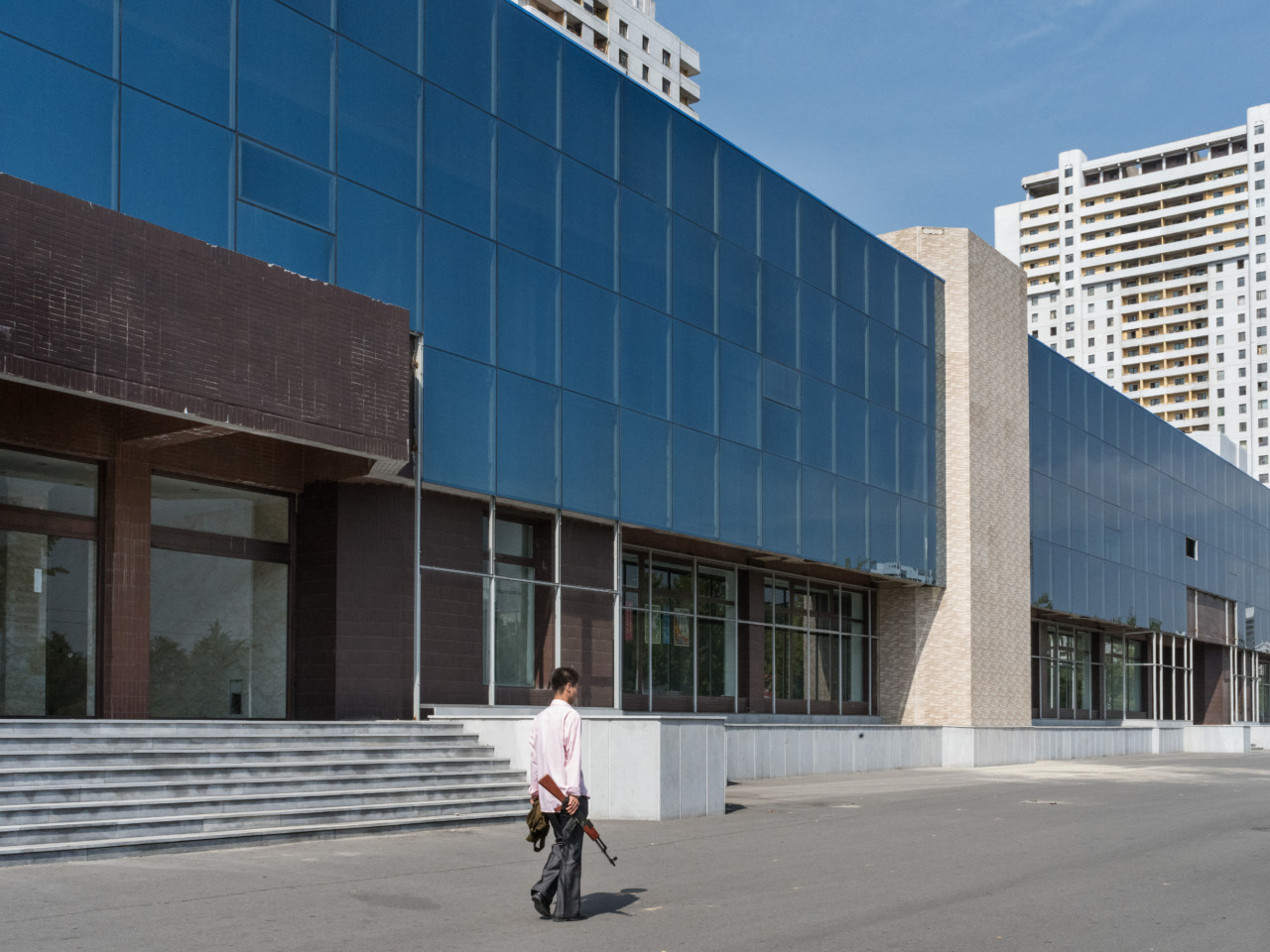