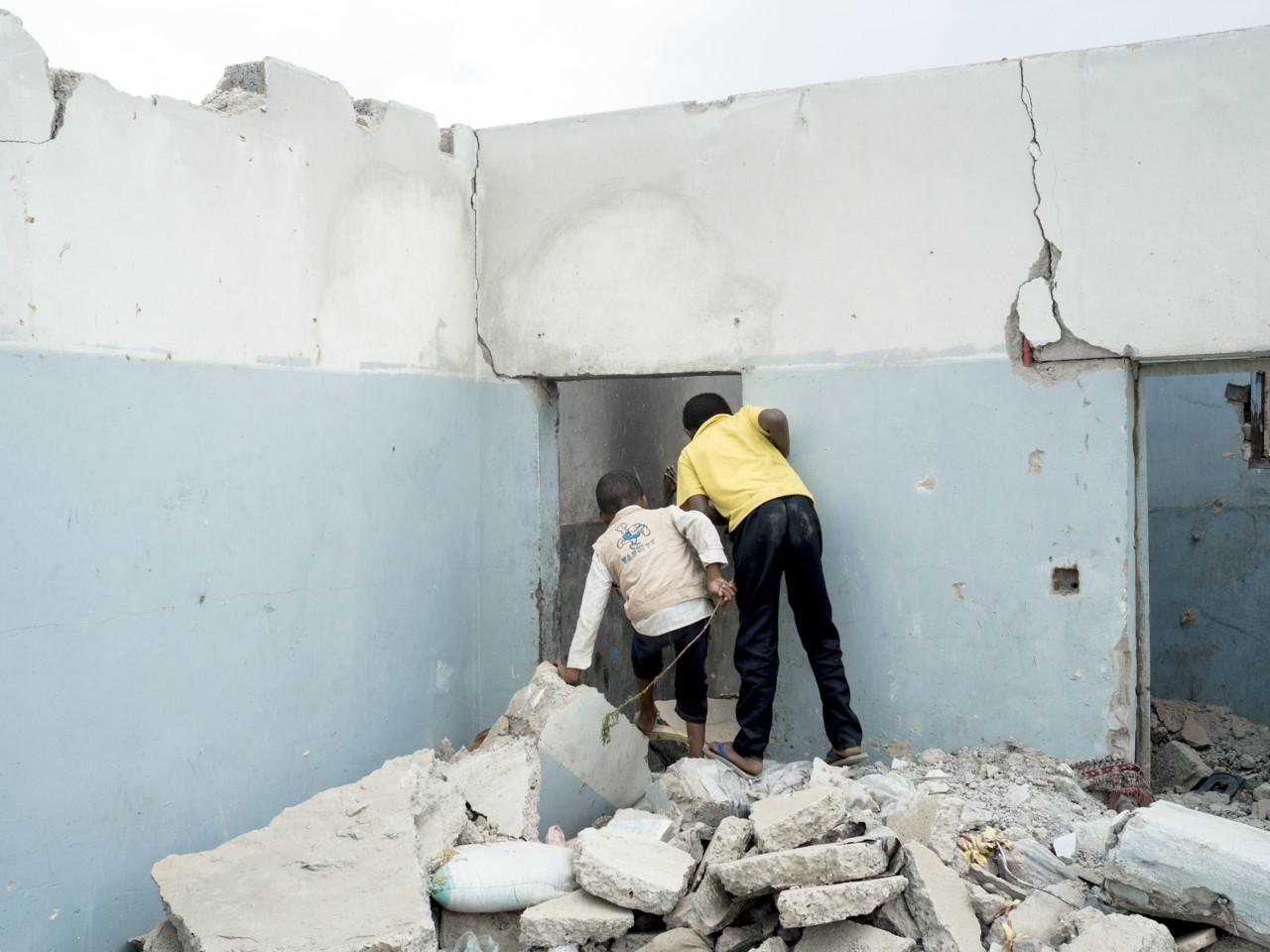 Lorenzo Meloni Aftermath of an airstrike carried out by the Saudi Arabian-led coalition that killed 30 civilians and wounded 48. Sawan is one of the poorest districts of Sanaa. Sawan District, Sanaa, Yemen. Septe (...)
mber 7, 2015. © Lorenzo Meloni | Magnum Photos

Established in 1989, Visa pour l’Image, an international festival of photojournalism, takes place annually in the Southern-French city of Perpignan. Founded by French former journalist Jean-François Leroy, it is a hub for established and aspiring photographers, agency representatives and photo-editors. Over the years, many Magnum photographers have had their work shown at Visa, and have been nominated for awards presented there. This year, Lorenzo Meloni is nominated for the Visa d’Or for his work in Yemen.

Meloni has been documenting daily life in Yemen since 2001, and has borne witness to the spiraling conflict in the country. When he started visiting the region – which according to Meloni, before the rise of Al Qaeda “was still considered a kind-of touristic place, even though it had a reputation for growing terrorist activity” – there were no obvious clues as to what would unfold. “When I was there, there was not any visible indication that a war of such dimensions would come. Yemen is the poorest country of the Middle East so there was, of course, a lot of discontent and unrest,” he says. What he went on to witness was the bubbling up of internal conflicts that would eventually boil over into a bitter and bloody civil war.

"If journalism on the ground can’t bring the truth to the public, at least it can offer a different point of view" Lorenzo Meloni A man is searching for his belongings between the rubble. Saada, Yemen. September 10, 2015. © Lorenzo Meloni | Magnum Photos Lorenzo Meloni In the cemetery of al Alhashoosh mosque, the funeral of Ali Sharafuddeen, 27 years old, killed in a suicide bomb by IS and Abdulmalik Almotawaqil, a fighter from Amran killed in the fights in Hode (...)
ida. Sanaa, Yemen. September 11, 2015. © Lorenzo Meloni | Magnum Photos

“I think it’s important to look closely at conflicts like this and then report on them with a certain degree of mental distance,” says Meloni. “We have a lot of information flowing on the internet but unfortunately it’s often more related to propaganda and opinion than journalism. If journalism on the ground can’t bring the truth to the public, at least it can offer a different point of view that, in a certain way, can enrich knowledge and dialogue about world events that influence even internal politics and policies.”

Visa’s founder Jean-François Leroy is equally evangelic about the role of photojournalism. Speaking to Magnum in the run-up to this year’s festival, he considers the enormous risk photojournalists put themselves in for the purpose of relaying images to the wider world. “I’m glad that people are telling me the stories in Libya, in Yemen, in Iraq and Syria, and I’m glad to see their work because without them I would not know anything about the world. We want to know what happens in our world.”

Below: Jérôme Sessini was nominated last year for his work in Ukraine, which he has been photographing since 2014. Jérôme Sessini The national Donetsk university has been turned into a shelter for displaced people from Donbass. Since Ukrainian forces launched their military operation against separatists, a lot of civilians fl (...)
ed from their houses because of the fighting. About 1,200 people, whose 170 children, live in the university and receive food and care provided by the separatists. Donetsk, Ukraine. August 12, 2014. © Jérôme Sessini | Magnum Photos Jérôme Sessini Inside the Donetsk prison, damages in the TV room caused by an artillery shelling. On Monday, August 11 the Donetsk Central prison NÂ°124 was hit by artillery shelling likely coming from positions (...)
of the Ukrainian army, killing 1 inmate. About a hundred prisoners, among the 715 detainees, panicked and escaped, most of them were brought back by the separatists or some returned voluntarily back to prison. Donetsk, Ukraine. August 12, 2014. © Jérôme Sessini | Magnum Photos

Below: Carl de Keyzer‘s ‘Cuba, La Lucha’ will be screened at this year’s festival. ‘Cuba la Lucha’ explores Cuba’s current transition from a Communist to a Capitalist regime, and its consequences on the population. 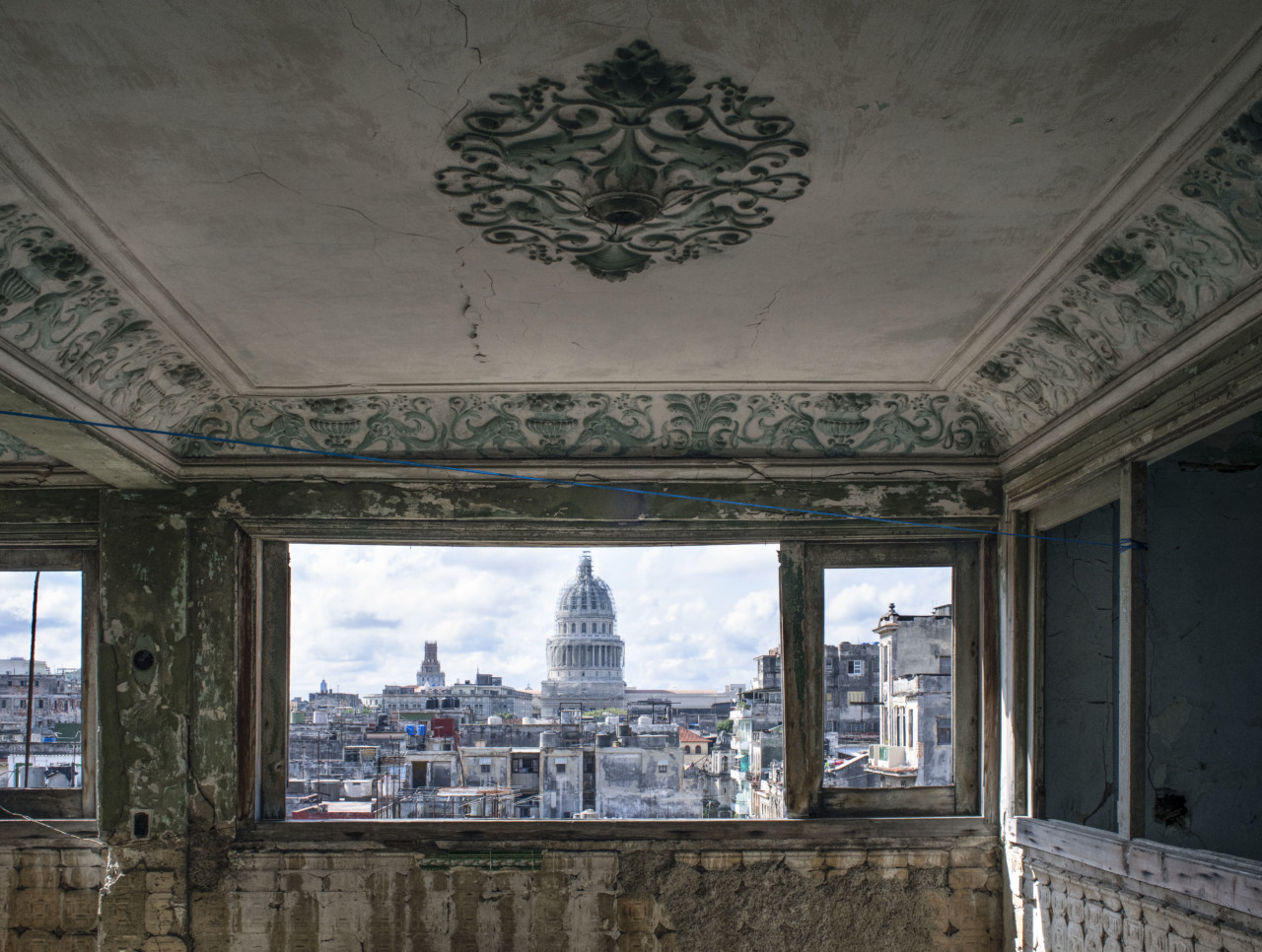 A different challenge comes as a result of the instantaneous sharing of photos. Now, when an event takes place, those present pull out their iPhones and personal cameras and take pictures, as the story unfolds instantly, in real-time online. “You are never the first one when something happens,” explains Leroy. “You will not be the first one to witness an event but you have to be the best second one.”

The bigger issue, according to Jean-François Leroy, is a wider shift in the way the press operates. “They are not buying the stories anymore,” he says. “They are spending less and less and less every day. Photographers are producing, they are still working. It’s so easy for me to find twenty-five exhibitions of photojournalism, so the photographers are still producing.” Linked to this is the demise of the photo-editor, as fewer organizations now use them. “It’s a problem because photographers are on their own and they need somebody to work with them to edit their work. I think that photographers are the worst editors in the world, and I think that photo-editors were really important for them.”

Below: in 1999 Chien-Chi Chang won the Visa d’Or feature award for his photo study of China Town, New York.

"I think that still pictures are much more powerful than video" Despite the challenges it faces, Jean-François Leroy is adamant that still photography will continue to hold relevance. It’s the moments that are frozen that etch themselves into history. “If we spoke for another two, four, five, twenty-four hours, we could mention at least 2000 pictures – still pictures – that are part of our international collective memory. We will not be able to mention five videos. That’s the truth,” says Leroy, citing the recent example of Usain Bolt running and smiling as he crossed the finish line at the Rio Olympics as an example of this – “We remember that and we’ll never remember the video from it…I think that still pictures are much more powerful than video.”