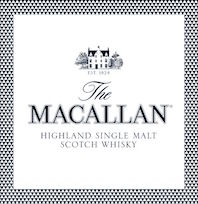 The Macallan, Masters of Photography

Six Magnum photographers; Steve McCurry, Martin Parr, Paolo Pellegrin, Mark Power, Gueorgui Pinkhassov and Alec Soth travelled to Scotland numerous times to explore the project and drew on varied aspects of the build for their instalments of the series. From the packed lunches of construction workers, to building materials, casks, portraits of workers, and breathtaking landscapes – the scale of the undertaking, which will forever alter the landscape of the estate, is brought home in the photographs, as is the variety of inspirations and approaches of the photographers.

The edition features a collectible set of six signed prints and an exclusive book of photography presented in a stunning archive style gift box. At the heart of the edition is a special limited release whisky, created by The Macallan Whisky Maker Sarah Burgess through a combination of eight casks, all differing in character to reflect the varied photographic approaches of each of the Magnum photographers.

This long-term partnership between The Macallan and Magnum Photos brings to the fore those behind the new distillery, celebrating the workers, architects, locals and craftsmen who make this iconic whisky.

The Macallan Masters of Photography in London

Mark Power’s eye for both grand scale and subtle detail has taken him to many a construction site before. His work at The Macallan acts as the backbone of the entire project, since he was the one charged specifically with documenting the build from beginning to end. However, this didn’t inhibit his approach: “As always with these kind of projects” he says, “I’m trying to create work inspired by the building, rather than pictures of the building… it’s a subtle but important difference.”

As well as telling the story of the build, he became fascinated by the ‘accidental sculptures’ he found on site: “These chance juxtapositions, created unintentionally by the workforce, can be extraordinarily beautiful. It’s then a matter of making the best pictures I can in order to do these creations justice”.

Echoing the slow process of barrel ageing, Power deliberately used a camera that’s relatively cumbersome and complicated to use. “I don’t take many pictures. It’s a much more contemplative approach, slow and considered. The exquisite detail the camera produces allows me to stand back and record the way the building fits so sensitively into the surrounding landscape.” 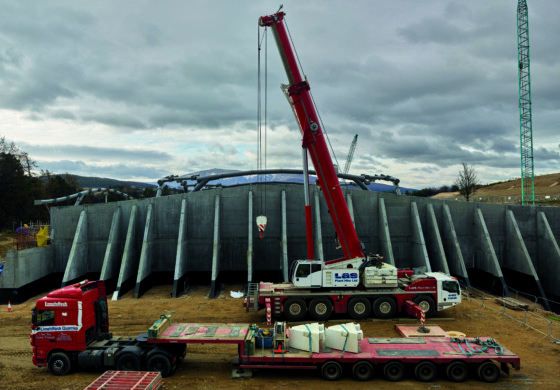 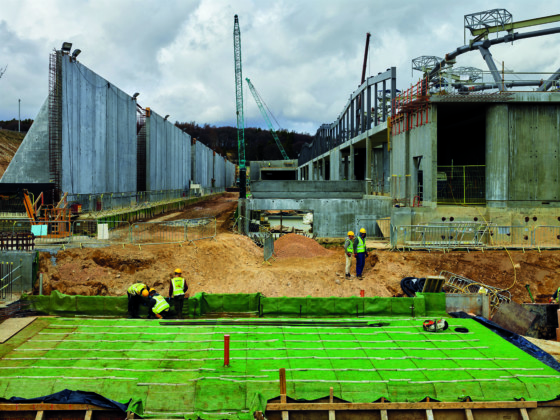 Having spent his career exploring cultural mores, and the social pastimes of the British, for his take on photographing The Macallan distillery, Martin Parr sought out people going about their daily activities on site. “I guess my main agenda is to explore the ordinary and make it stranger and weirder, because we’re so used to seeing ordinary life we tend to forget how interesting it is,” he says. Working on building the new distillery were contractors pouring the new foundations, rolling the famous barrels, or stopping for a spot of lunch, and as the photographer says, “wherever there’s people, there’s interesting photographs.” Parr discovered many of the workers building the new site were Romanian, so the photographer looked to show the food that they were eating as well as their hard work on the construction.

“I love being a photographer because I’m such a nosy person,” says Parr, who, once he’d seen the construction site for the new distillery, explored the wider grounds of The Macallan Easter Elchies Estate. Here, he discovered men in waders fishing in the river. “The great thing about working with The Macallan” he says, “is you get great creative freedom, so it’s up to you to come up here and to turn the whole project into something that you own, and something that you’ve got your authorship on, so that’s a great challenge.” The resultant work, gives the distillery the typical Parr treatment, showing scenes anyone visiting the fast-developing construction site would have witnessed, such as packed lunches and workers in safety-orange, all rendered with a touch of the photographer’s signature strangeness. 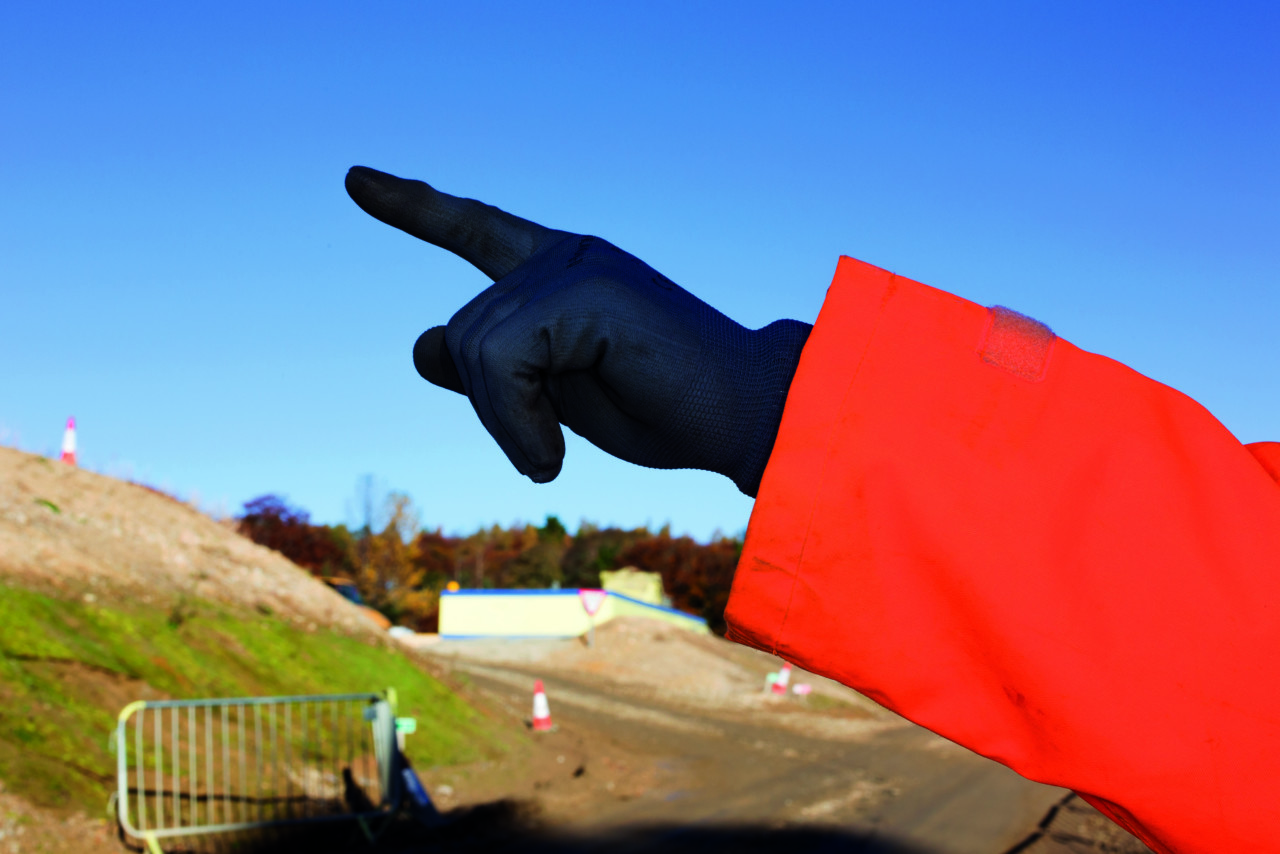 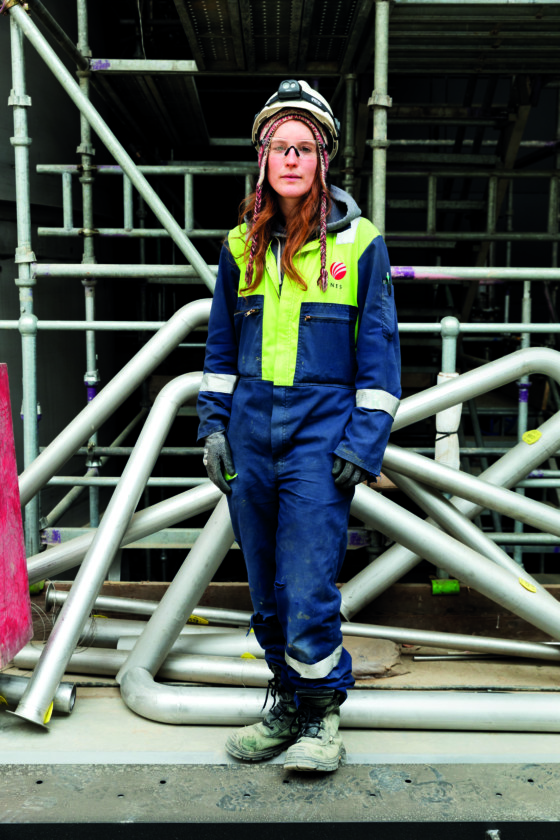 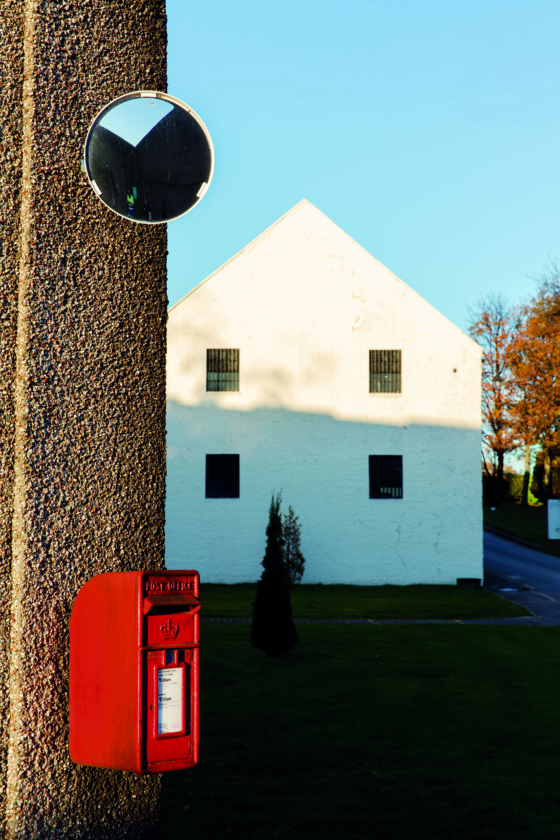 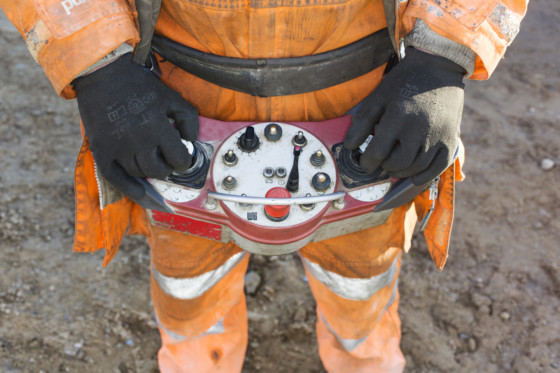 Known for his remarkable approach to photographing light, Gueorgui Pinkhassov harnessed a variety of settings, from sunlight streaming into the distillery’s darkened rooms, to the dramatic evening light washing over the distillery grounds. “If there’s a natural light or shadow, I always try to use it in my photos,” says, Pinkhassov, whose technique is also heavily guided by his instincts. “When taking photos, I always try to feel something because if intuition does not leave me, I’ll always have a good composition,” he says.

“In order to take a really good photo, you need to know the process, details, and just to be lucky,” offers the photographer, talking about how he gets his shots. “You have to find or create opportunities and take pictures.” 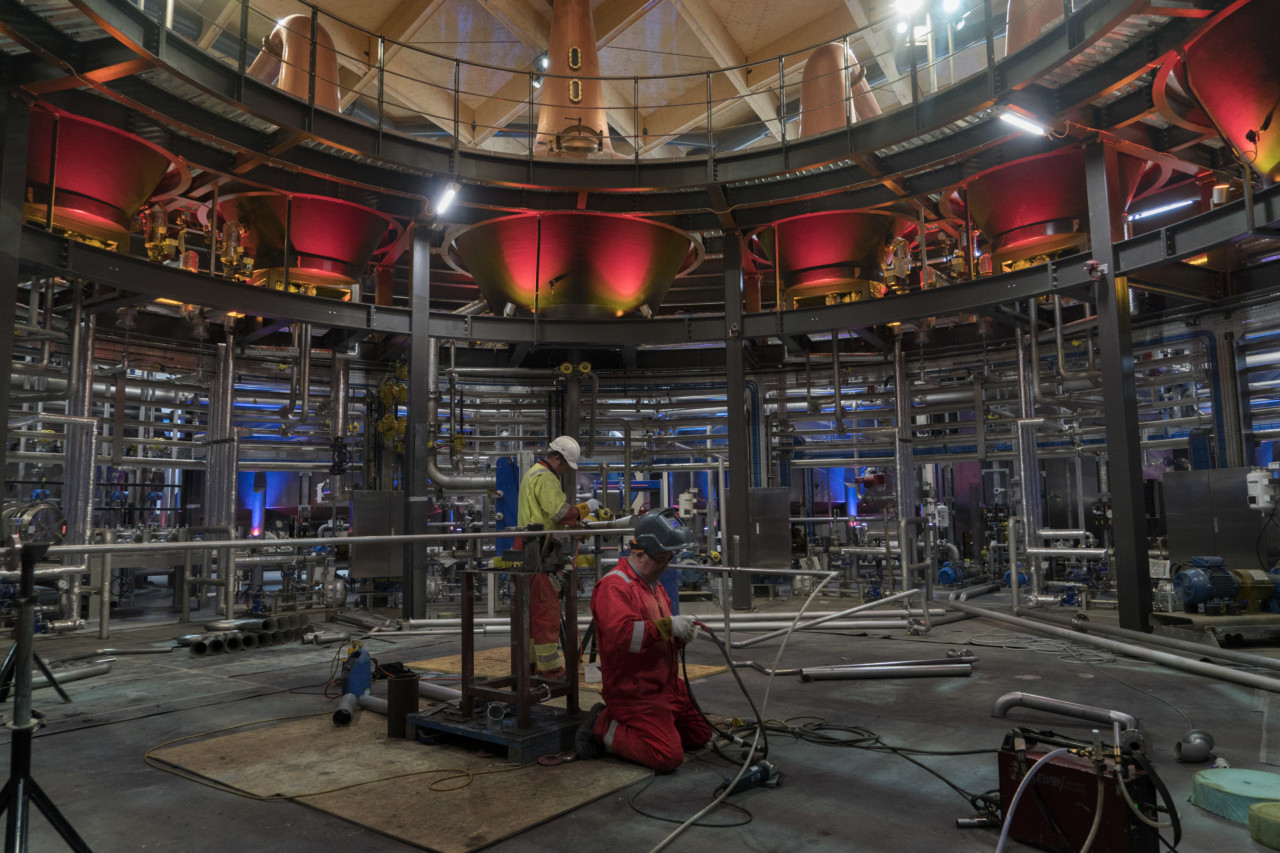 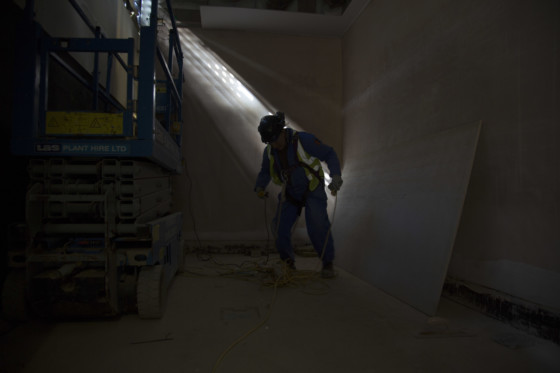 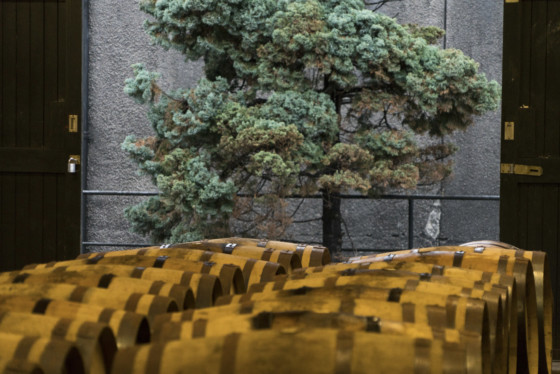 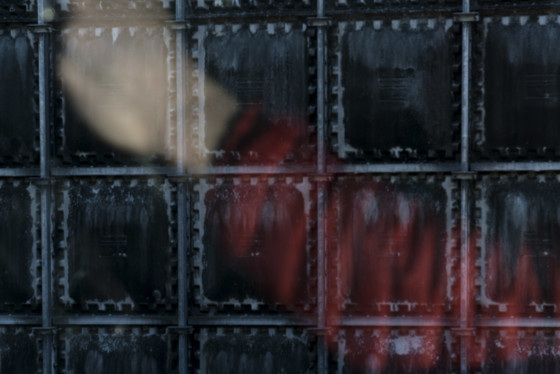 “The thing that’s always interested me first in photography has been people – how we relate to each other, how we relate to the environment, how we relate with wildlife and animals – there’s an energy that you feed off of,” says Steve Mcurry, whose Macallan work follows the impressive manual effort it has taken to build the new distillery, from the construction site floor, up to the top of a cherry picker, where the scale of the undertaking is visible.

“I just hope that my pictures will tell the story in an interesting, creative way, but it’s really about people interacting with the site and how these workers are doing an incredible job to achieve their goal. It’s going to be an amazing project.”

McCurry also admires the design of the architecture, which inserts the distillery subtly into the stunning natural sloping hillside. “The great thing about this location is that it will be basically unseen, it will blend in with the environment,” he says. “There’s a poetry, there’s a harmony, I think an intelligent solution to having a distillery here.” 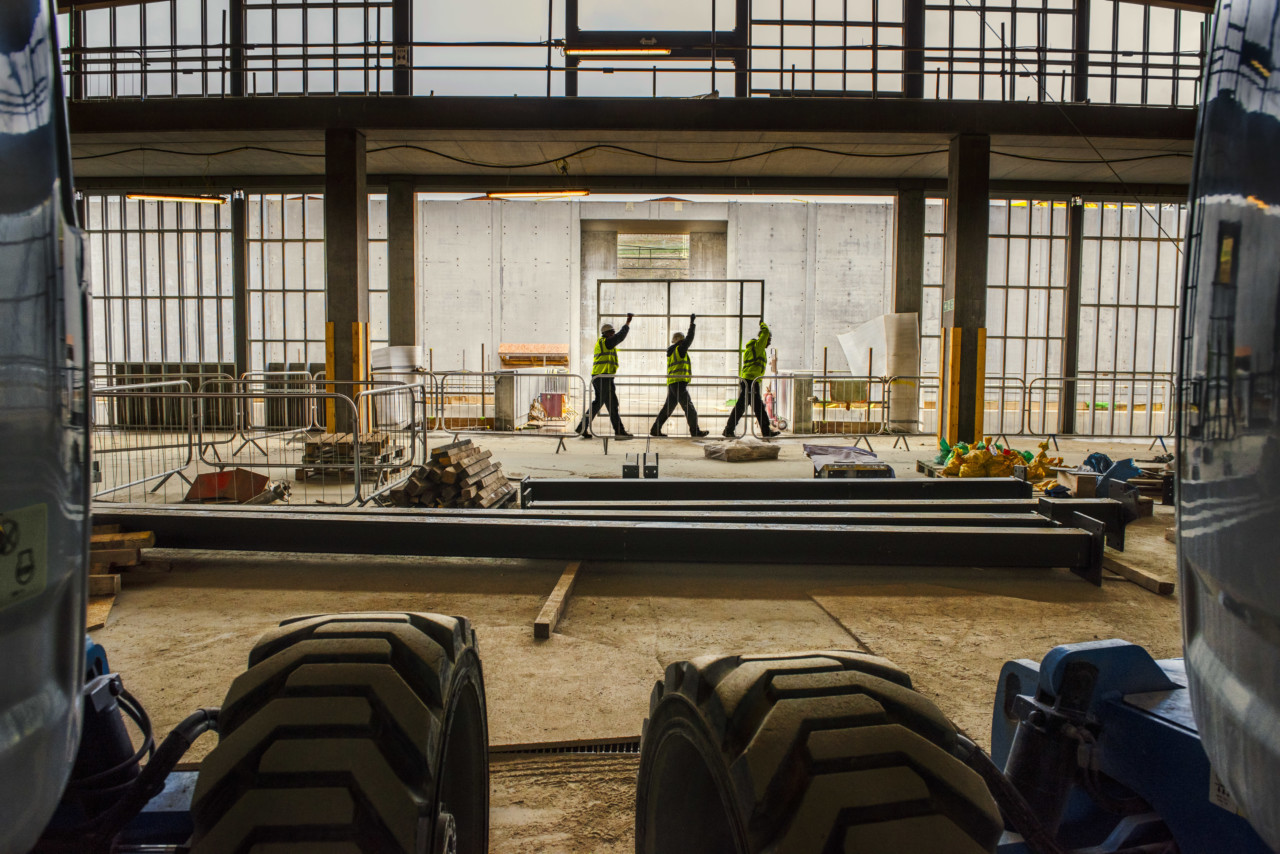 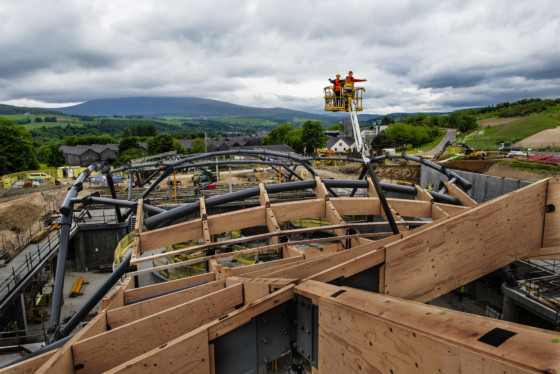 Steve McCurry Robert Mitchell , The Ghillie for the Macallan Fishing beat, with his dogs Rennie on the right and Dixie on the left. Construction of the new Macallan distillery. Craigellachie. Moray. Scotland. GB (...)
. 2016. © Steve McCurry | Magnum Photos
License | 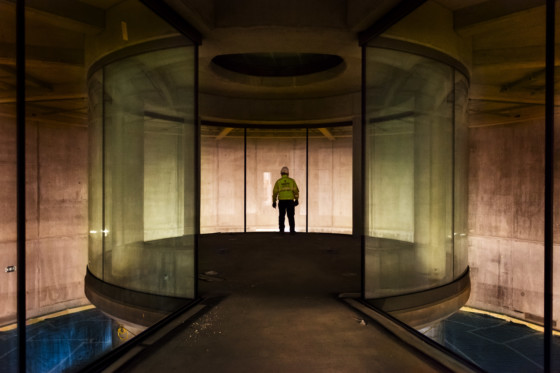 Italian photographer Paolo Pellegrin, who comes from a family of architects, was impressed with not only the structure of the new building but the process of the construction itself, from raw materials to the finished product. “I think it’s a remarkable piece of architecture,” he says. “The fact that it blends in so seamlessly with the landscape here is the most interesting element.” One shot that portrays a man abseiling down one of the grass-covered mounds that camouflage the distillery in the surrounding countryside, speaks to the sheer scale of the project, while still lives of the interior alongside images of the grounds of the estate emphasise his point.

“And of course the area,” adds Pellegrin. “It’s a geographical notion, but it also becomes a cultural notion – where this product is made, so I tried to step back a little and have these wide frames of this beautiful landscape we are in.” The photographer elevates the building materials, piled up around the construction with dramatic photography that makes them look like, “beautiful artefacts, massive sculptures,” considering them “somehow mysteriously beautiful.” 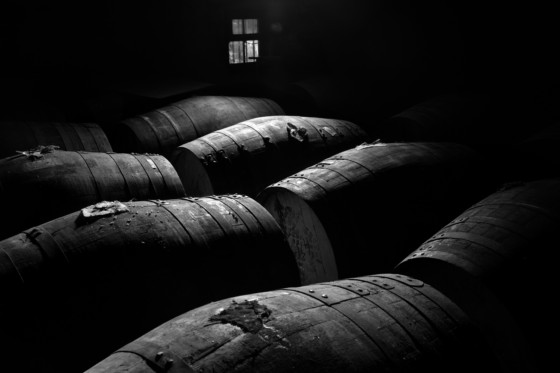 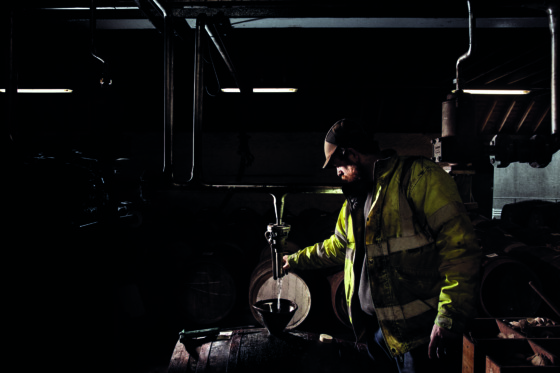 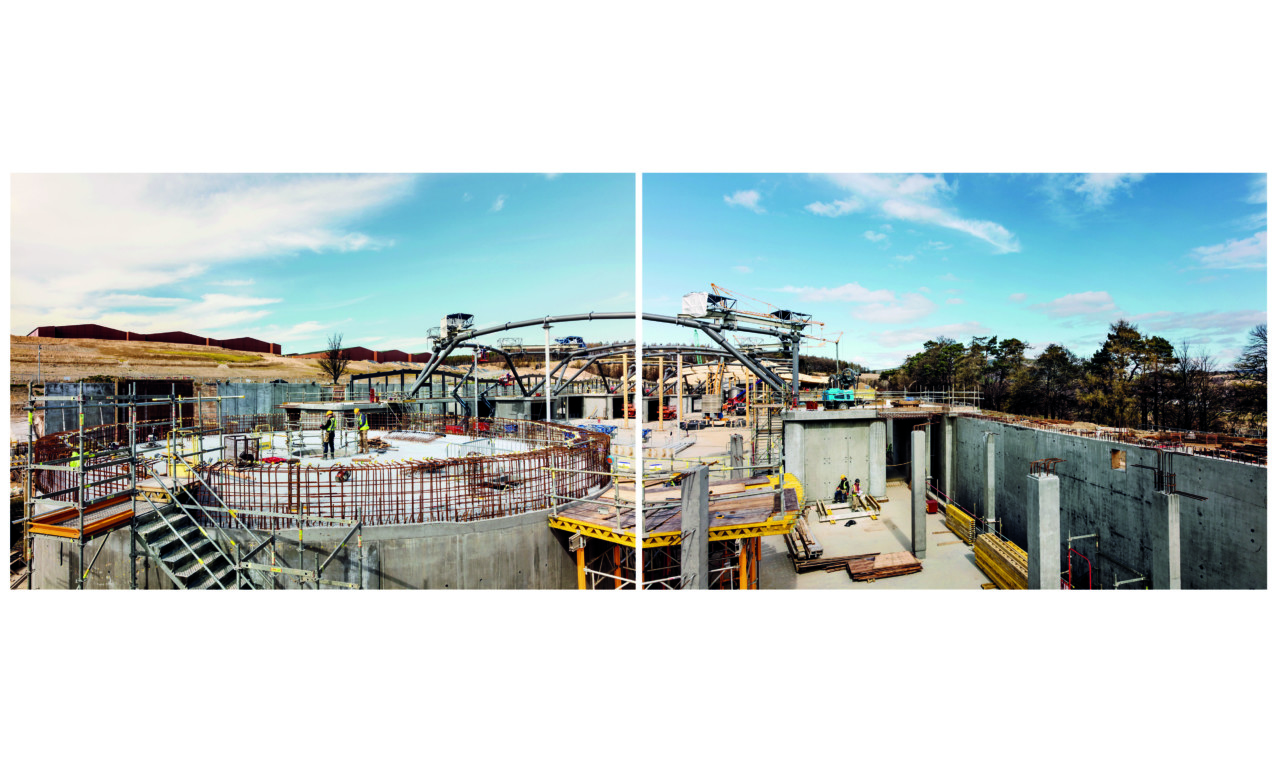 Time was on Alec Soth’s mind when he photographed at The Macallan. “I really like the old structures, and the new structure–again that relationship with time,” he says, adding, “I had this thought that time does something in particular to photography that’s really special, and it preserves something, in the same way that it does something to this spirit.”

Musing on the idea of portraiture he says, “A portrait is a presentation of the exterior, and you sort of project onto it your own thoughts and beliefs. One of the things I’m trying to do here is to embrace the cliché but find my own way in. Not just photograph it’s opposite but embrace it to maybe to see it in a slightly new way.”

Soth’s solution was to treat the whisky casksas if they were portrait subjects. “I looked at these casks and I thought that is like an act of portraiture–individuality of this object which has this physical presence that’s body-like.”

The Macallan Masters of Photography in London 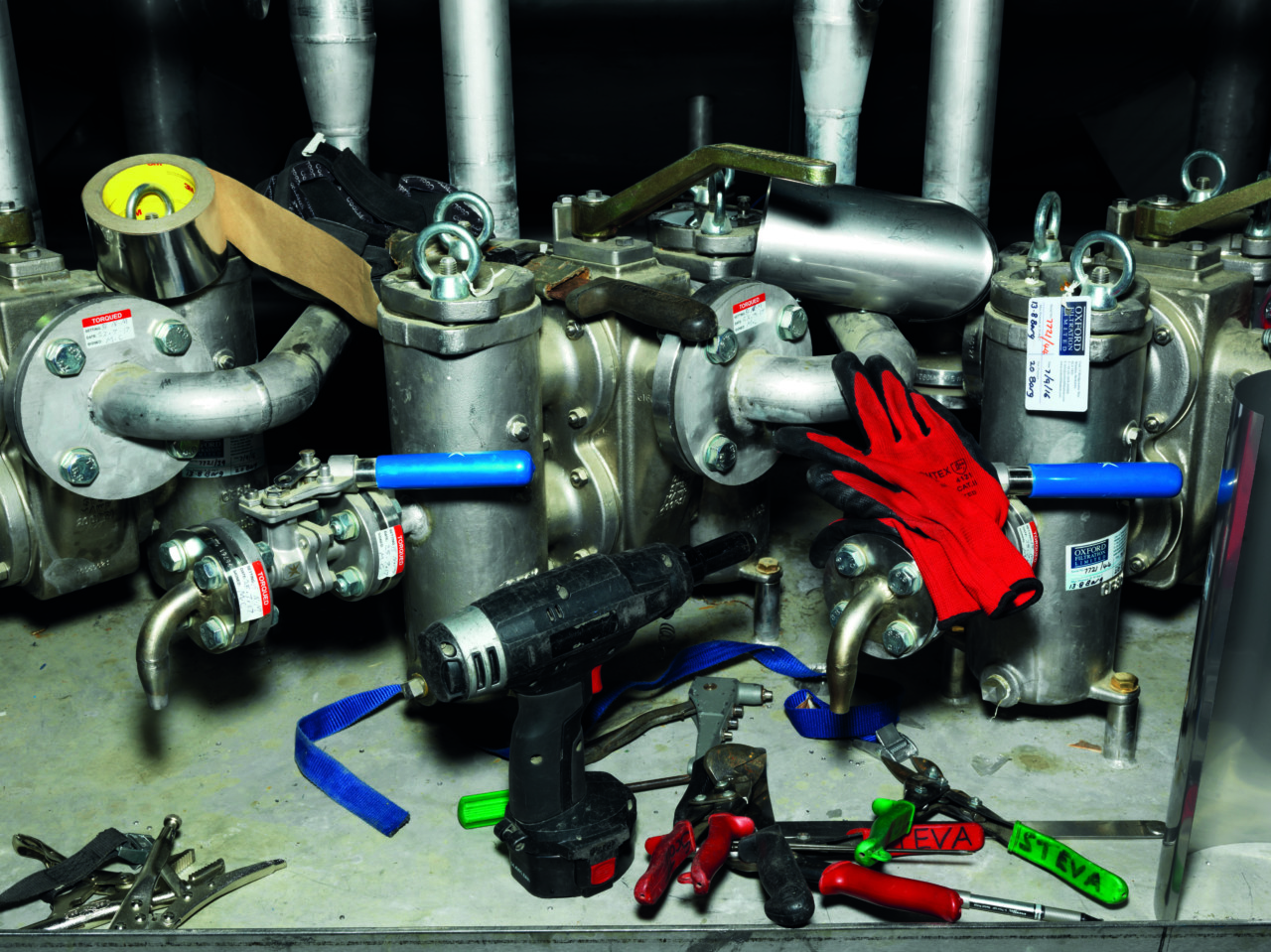 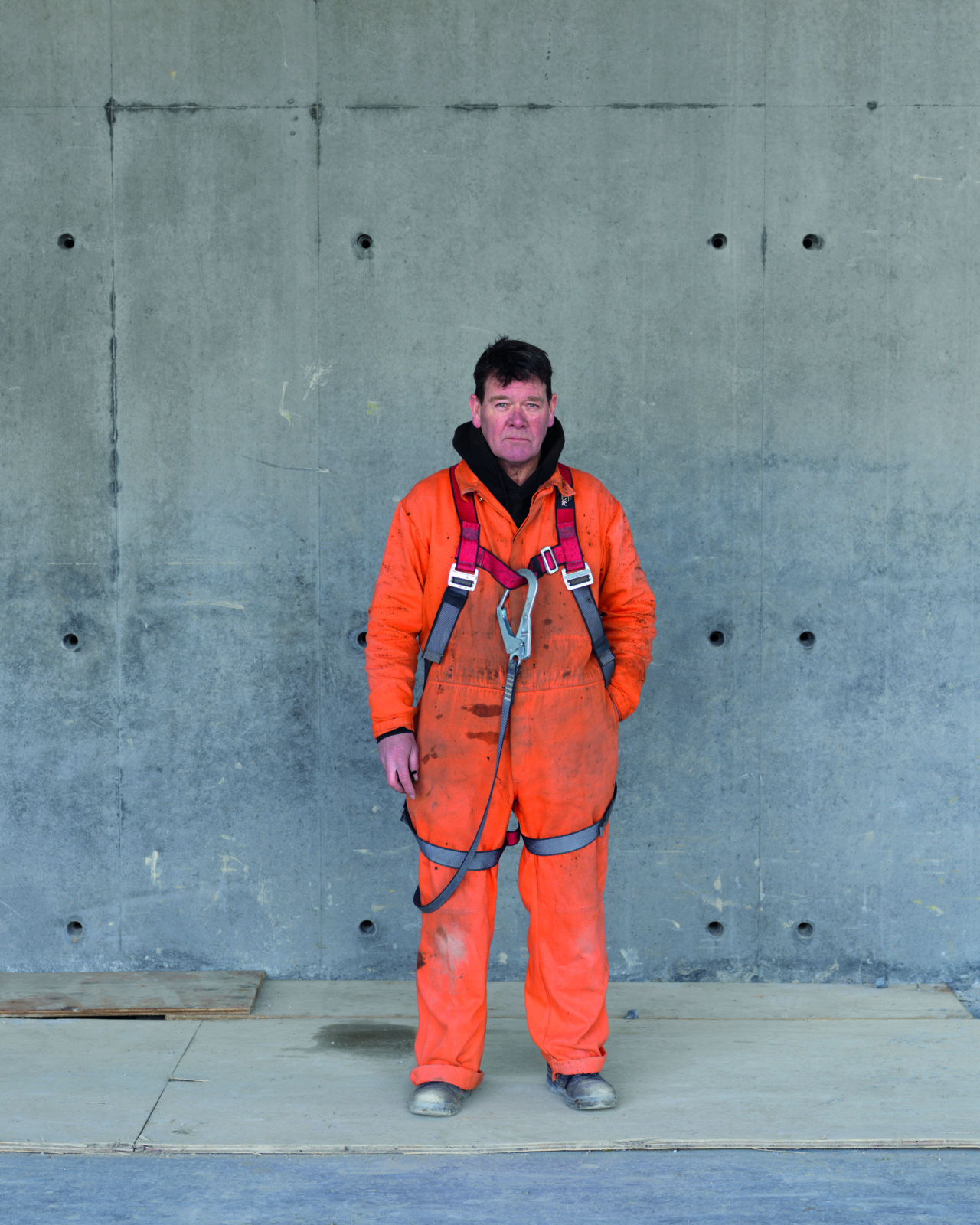