Alex Majoli photographs the biggest street party in Britain, capturing the crowds, performers, and characters behind the historic London event 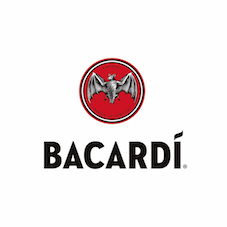 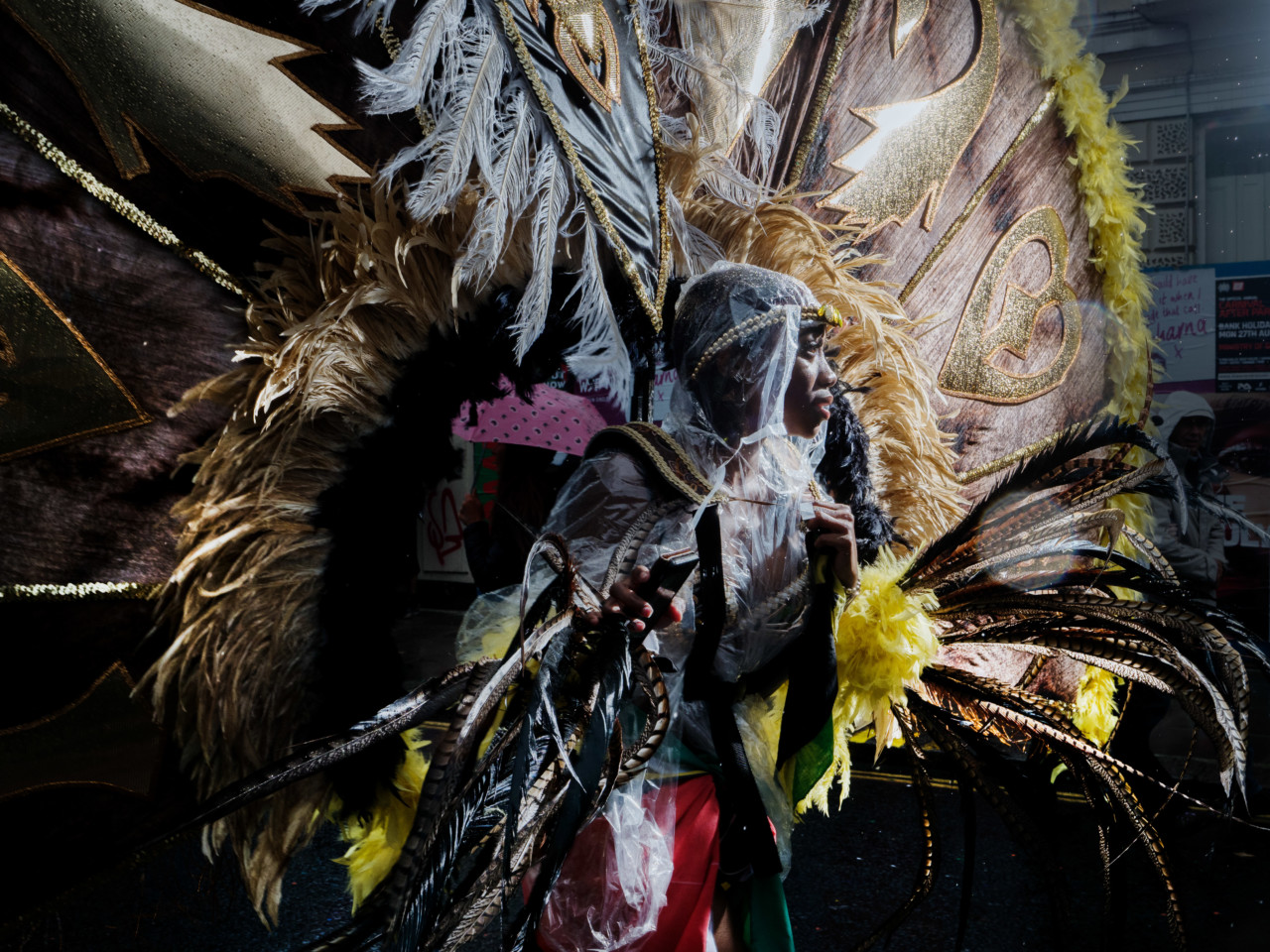 Since the 1950s the Notting Hill Carnival, led by the city’s Caribbean community and celebrating its heritage, has been a key fixture in the capital’s late-summer calendar. Images of Carnival are key icons in the city’s visual identity – from the mas bands and floats, to crowds of revellers turning the usually more staid West London streets into riots of color. Magnum photographers have over the years photographed this, the biggest Carnival event outside Rio, adding to that visual and cultural history. This year Alex Majoli was present to photograph the crowds and performers, as well as those less-sung heroes behind Britain’s most famous party. 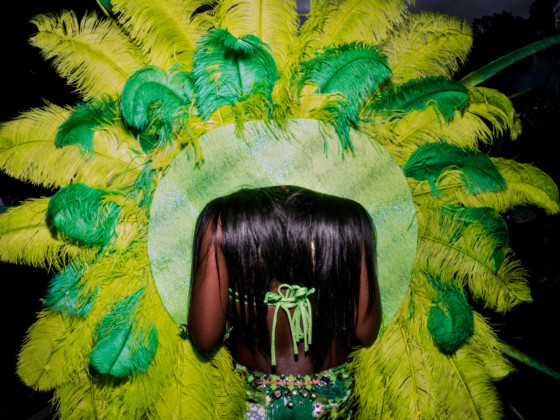 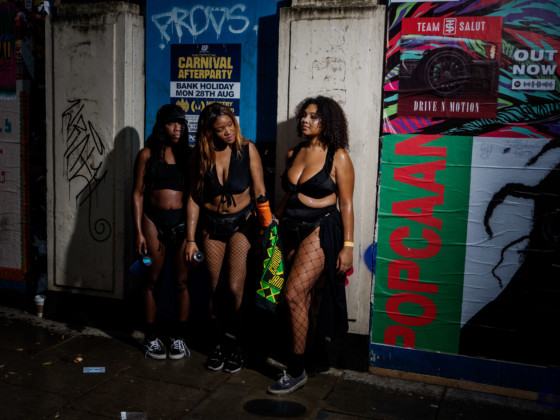 Once a year, a technicolor river flows through West London, sweeping up everyone in its path. The Notting Hill Carnival first began in the late 1950s as a way to improve race relations in a divided city, but it has since evolved into a well-established celebration of black British culture with an audience of over a million people across two days. Many familiar aspects of carnival culture are on abundant display, from the smoky smell of jerk to the throbbing bass of sound systems and the kaleidoscopic costumes of the ‘mas’ (masquerade) bands. Outside of Rio de Janeiro, it is one of the most vibrant explosions of human energy on the planet.

In the geographic and cultural heart of London’s carnival district sits Powis Square, a location of great historical importance to the event. Throughout the 60s, local residents battled with the council to turn the private land into a public space for residents, with a playground for kids. Since the beginning of carnival, it has become a place to witness true calypso music in all of its rhythmic glory. This year, BACARDÍ came on board to work with the local community to create a special program of live music – known as Casa BACARDÍ – that honored the history of carnival by supporting a traditional line up of calypso, soca and local young musicians on the opening day. 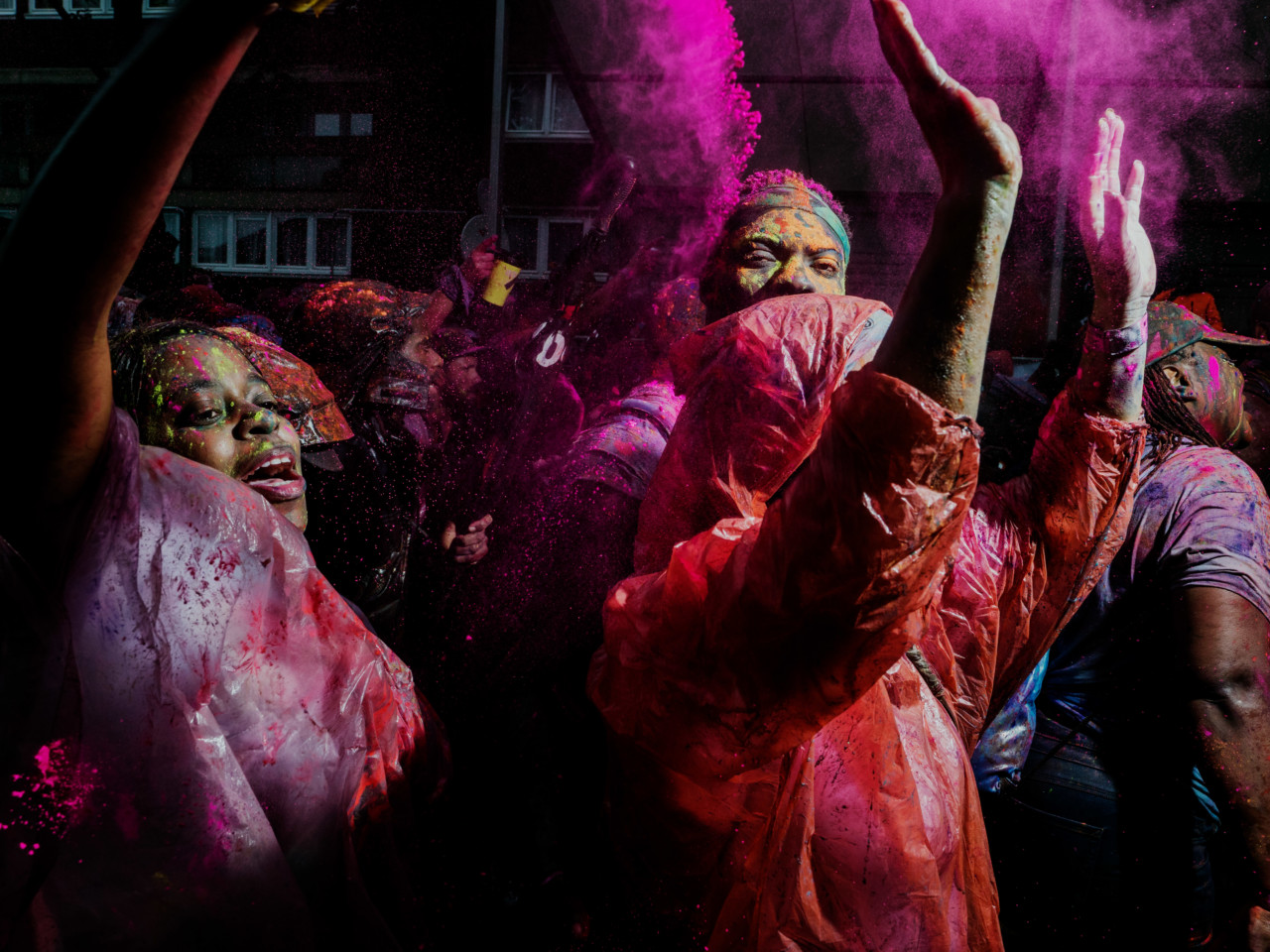 Meanwhile, over on the carnival’s main drag, the morning had kicked off with J’ouvert, an age-old carnival tradition that involves party-goers tossing flour, pigments and paint at each other, and smearing black oil over anyone and everyone. Huge puddles of oil pooled on the rain-soaked road, reflecting rainbows as far as the eye could see. These were soon splashed away by the enormous herd of decorative floats that came rolling down the road. 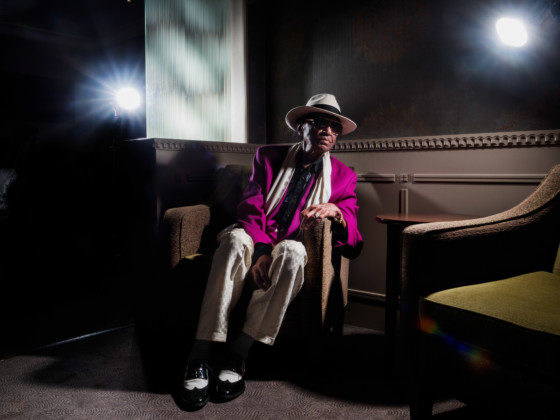 Alex Majoli Sonny Blacks was an original member of the first carnival committee launched in October 1968 and has been a promoter of Calypso and Steel Pan music for many years. The Notting Hill Carnival. London (...)
. England. GB. 2018. © Alex Majoli | Magnum Photos 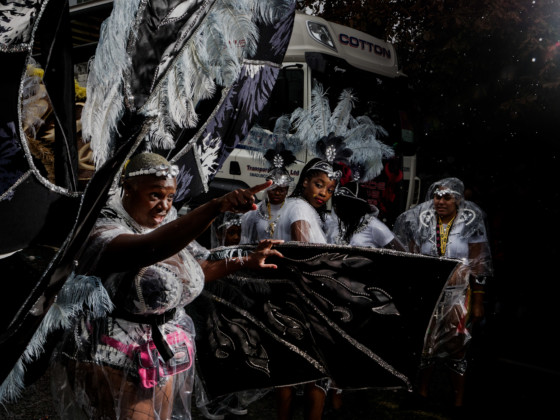 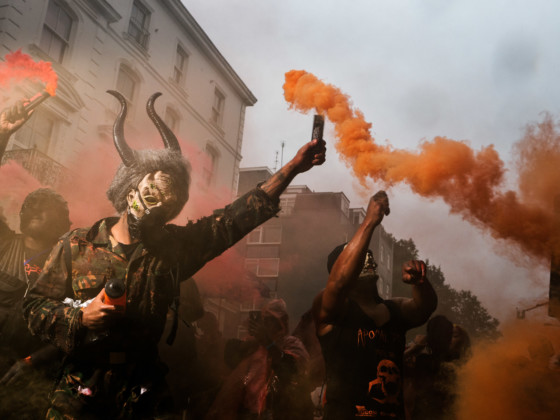 An ardent community spirit has kept carnival alive and evolving for 52 years, and nowhere is this more evident than on the floats. Take Flagz Mas Band for instance, who blast soca and dancehall music from their blue double decker bus while up to 400 dancers entertain the surrounding crowds. Their band embraces all ages and even contains three generations of the same family.

Lead costume designer Sonya Dyer comes from the world of fashion and has experienced the buzz of London Fashion Week, but says it doesn’t compare to carnival. In the build up to the event, her team were pulling all-nighters to ensure the peacock feathers and sequins on every costume were just right. “I remember first coming here as a child,” she tells me. “It looked like a fantasy land. Everyone was so happy: the smiles, music, sounds, and smells – there’s just nothing else like it. This is my home, my heart, my spirit.” 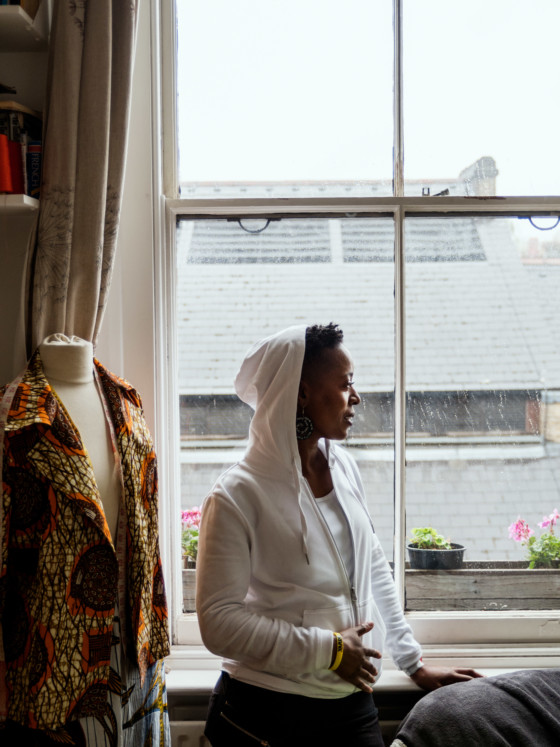 Over on Powis Terrace, there is one character whose presence is almost as intrinsic to carnival as the curried goat steadily bubbling at nearby food stands. Throughout her career, Linett Kamala has helped set up schools across London, trained head teachers, and facilitated creative workshops. But very few of her pupils know that she was one of the first women to ever DJ at Notting Hill Carnival, back in the early 80s. “I was a novelty back then,” she smiles, “everyone was taking photos of me.”

In the 36 years since, she has helped to run Disya Jeneration, a monumental sound system that plays everything from classic soul and r&b to house and jungle, and still aims to provide a platform for new female DJs. “This is the best time to be in London,” she says. “No one can tell me any different. When people come together on these streets it is historical.” But what exactly makes it so unique? “It’s simple,” says Linett, “you just turn up and be you – that’s carnival.” 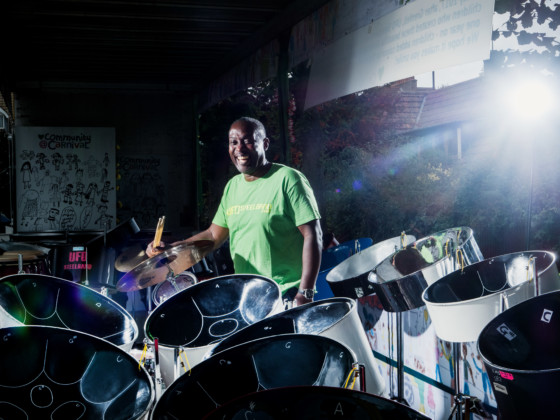 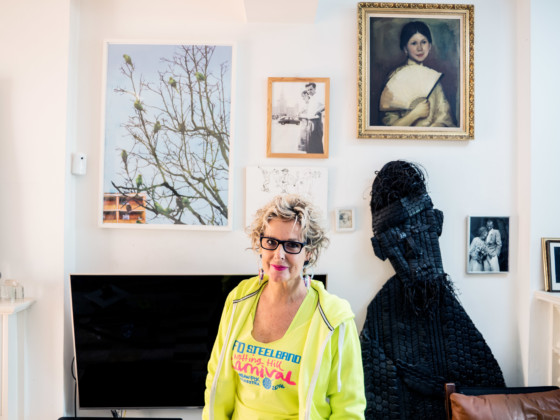 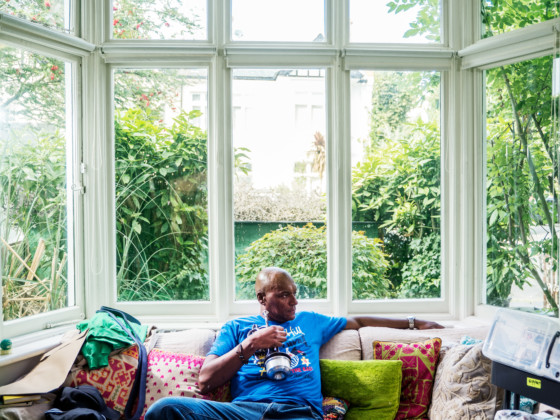 Whenever the rib-tickling bass dies down over the weekend, you can hear an unmistakable sound: the soothing twinkle of steel drums. London artist Fiona Hawthorne has been helping to run Urban Fox Orchestra (UFO) Steelband for over fifteen years, alongside her husband the actor Colin Salmon, and the musical director Jason Constantine. After the tragedy of the 2017 fire at Grenfell Tower, Fiona went into local schools and encouraged children to make unique art pieces that encapsulated the spirit of community. This year and last year those drawings have been draped over the UFO Steelband float as they performed for tens of thousands of onlookers.

“It’s hard to put into words just how much carnival nourishes the soul, but it really does,” explains Fiona. “The experience of practising the music and honing the tunes creates a fantastic sense of teamwork. It’s a bit like launching a ship; it’s always rough waters at the beginning of the day but then you’re out in the ocean and it’s calm and wonderful.” As the UFO Steelband float passes by on Ladbroke Grove, one can see a flurry of activity up and down their 12 meter trailer, as chicken wings and samosas are passed along the line to hungry drummers, as well as plastic bottles of rum punch. If music is the beating heart of carnival, then rum is the blood that beats through it. Fiona explains: “Our music director is from Trinidad, and each year he makes us a special rum recipe only he knows. He makes a big vat of it, and then we bottle it. It’s a special part of the weekend.”

On the second day of carnival, Casa BACARDÍ’s Powis Square Stage was opened by the Association of Calypsonians, who then passed the torch on to an afternoon long program of secret artists. At 4pm, Stefflon Don revealed herself to be the first of the hush-hush performers. She quickly engaged the crowd in full on party mode, inviting four members of the audience on stage for an impromptu dance off. 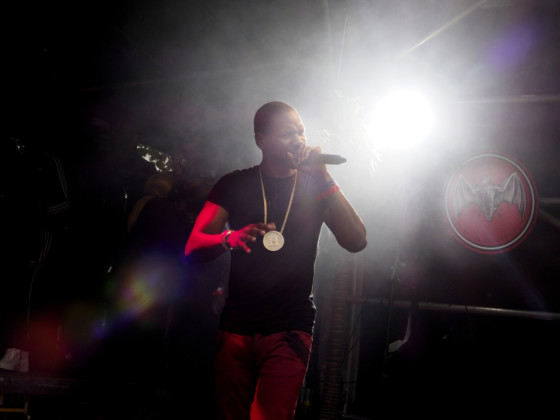 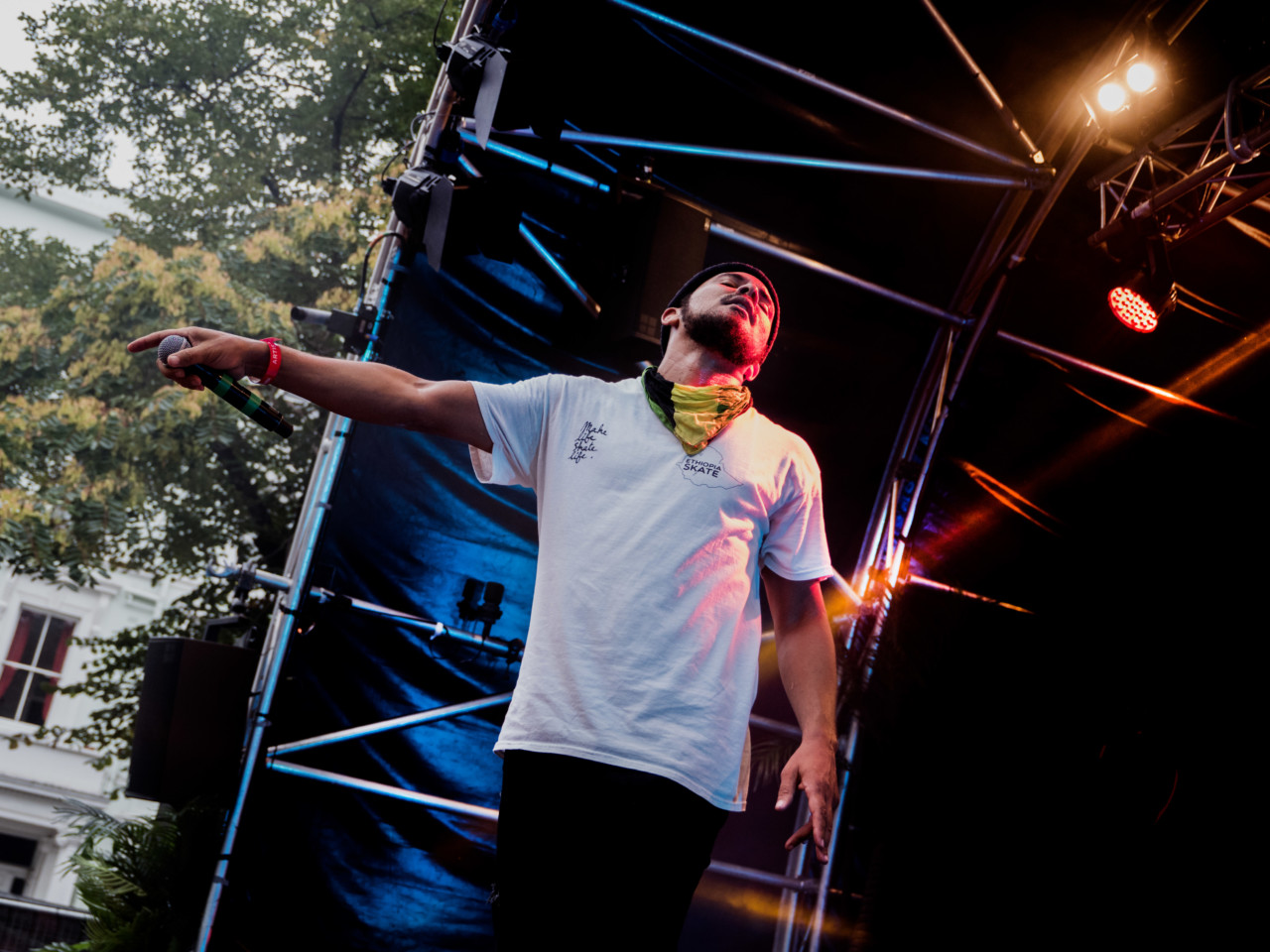 That energy was firmly matched by the next guest: South London rap don, Giggs – who thundered through a set that included “Whippin’ Excursion” and his all time classic, “Talkin The Hardest”. As carnival weekend entered its final hours, three icons of contemporary electronic dance music as well as dancehall and reggae strolled up onstage. Diplo, Jillionaire and Walshy Fire – better known together as Major Lazer – delivered an explosion of rhythms, confetti and smoke, with songs like “Get Free” and Gyptian’s “Hold You” provoking scenes of jubilant chaos in the crowd.

It’s these scenes of mass love, unity and celebration – across all age groups and ethnicities – that make Notting Hill Carnival such a unique phenomenon in Britain and such a tribute to the community that makes it happen. As Linett Kamala said earlier in the day, “I get enough energy from these two days to last me right through to next year.” 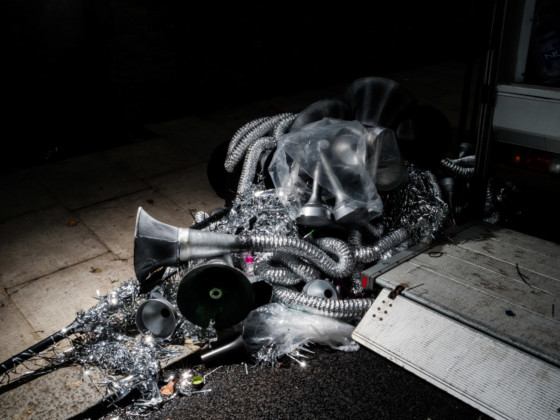