Countless celebrities posed for the French wax sculptor who aimed to capture the ‘soul’, not just the likeness, of his subjects 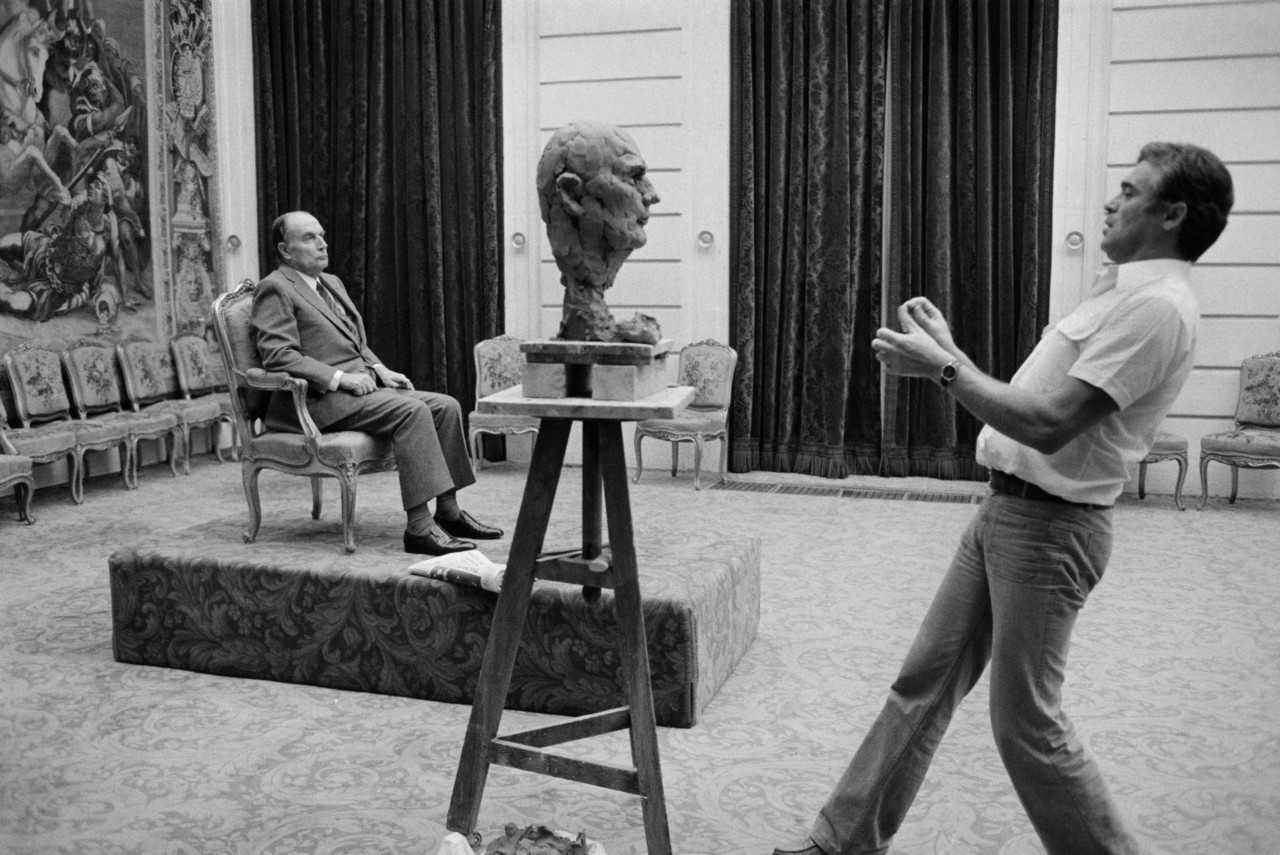 Guy Le Querrec François Mitterrand posing for his bust by sculptor Daniel Druet. Ninth sitting in the banquet hall, Thursday October 6th 1983, between 11.30am and 12.30pm. The President of the French Republic pos (...)
ed for ten sittings for sculptor Daniel Druet. During the 8th sitting the sculptor, unsatisfied with his work, destroyed the bust. The final sculpture was realized during these last two sittings a year and a half later. Paris. France. 1983. © Guy Le Querrec | Magnum Photos

You can see other stories from the In the Studio series here.

Here we look at just some of the many images made by French photographer Guy Le Querrec of the sculptor Daniel Druet. Le Querrec photographed Druet many times over decades as he created likenesses – often uncannily acurate ones – of France’s most famous faces, from Mitterand to Gainsbourg. 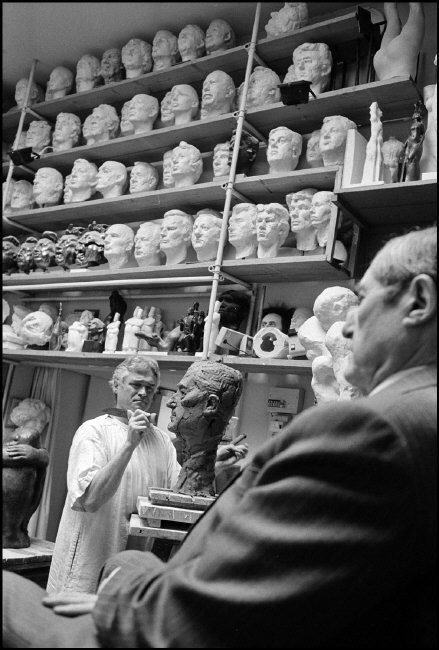 Guy Le Querrec From behind on the right, French vigneron Andre Rebut during a sitting with Daniel Druet (center) for the making of his clay bust. This clay bust constitutes the necessary preliminary work for the (...)
creation of the vigneron s wax effigy destined to a tableau of wax characters commissioned by French negociant Georges Duboeuf from Romaneche-Thorins for the Hameau du vin museum (Saone-et-Loire department, Bourgogne region) to honor the vignerons of the Beaujolais region. On the shelves, cast busts of VIPs by Daniel Druet. At the studio of French sculptor Daniel Druet. 14th arrondissement. Paris. France. Wednesday 20th April, 1994. © Guy Le Querrec | Magnum Photos

In Daniel Druet’s studio, more than 80 human heads loom from the shelves. Many are recognizable as the most famous French personalities of the 21st Century; showbiz stars, politicians, writers and sportsmen. The heads are ghosts of those who have come to pose for Druet, who, with extraordinary skill and patience, seemingly creates life from wax and clay. The many heads that line these shelves are a testament to the sculptor’s prolific and celebrated career.

Magnum photographer Guy Le Querrec has visited Druet’s Parisian studio, 14th Arrondissement, countless times over the course of many decades and captured the various stages of the sculpting process, including the often intimate and extended exchanges between artist and sitter, as the provisionary clay bust is realised. 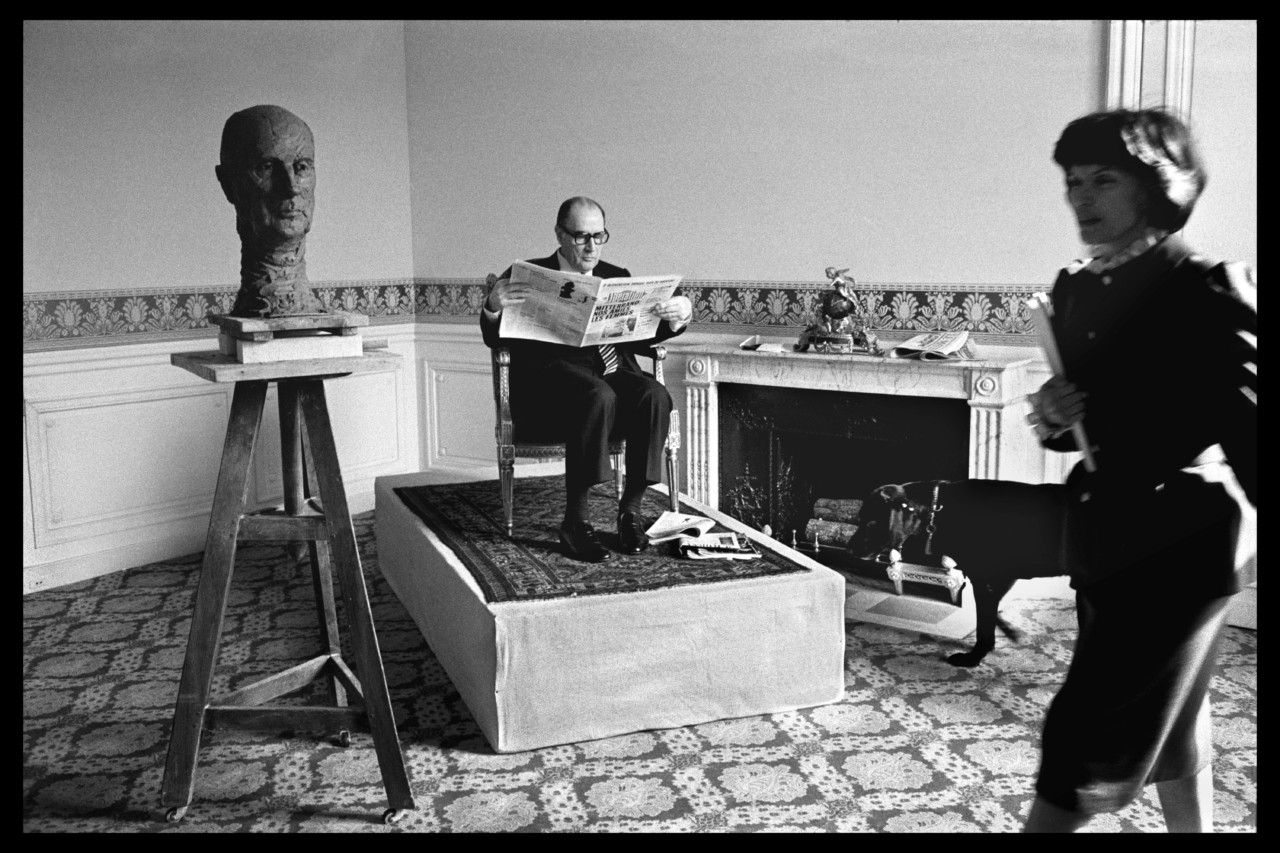 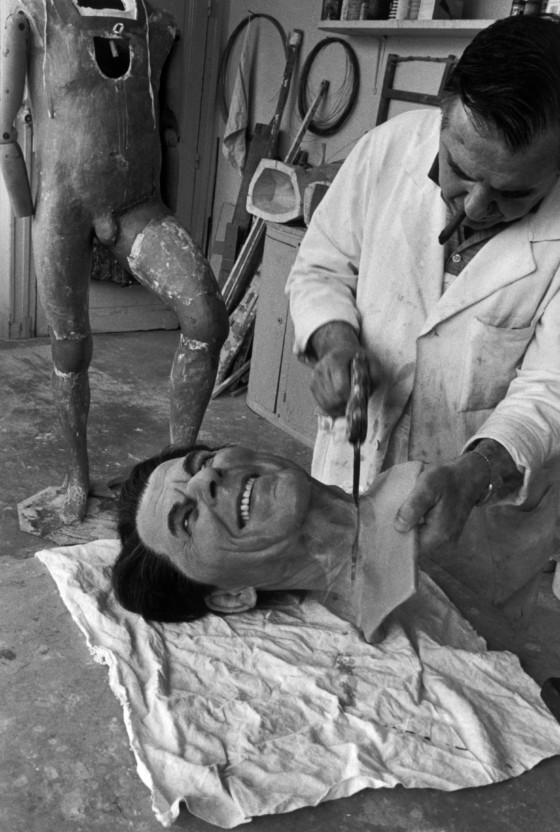 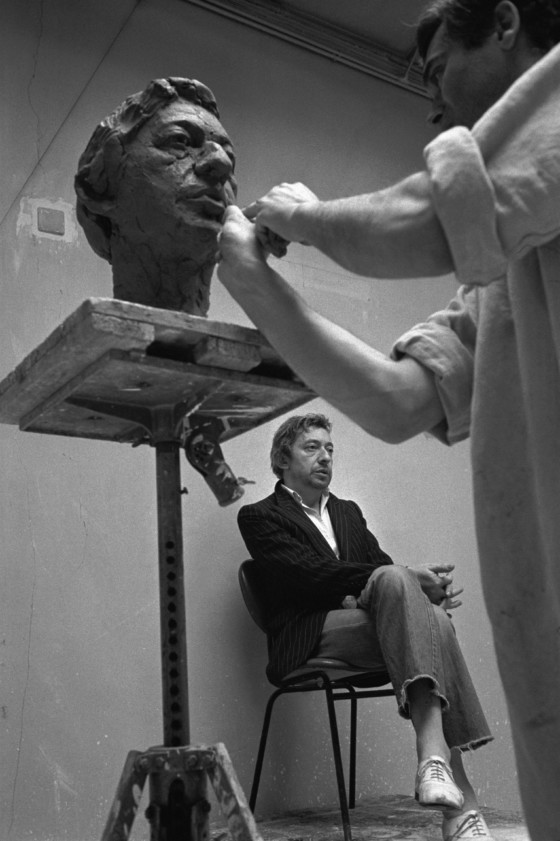 Capturing the ‘soul’ of the subject is of principal importance to Druet; he wishes to go beyond appearances, beyond the physical. “The starting point for the realization of any wax figure lies in a search that could be described as ‘psychological’,” said Druet of his method. “This initial step is indispensable and can be translated either by an encounter with the model (the pose session) when it is about a contemporary personality, or, for the historical figures, by an investigation through the books – the biographies in particular – and, of course, paintings, sculptures and portraits of all kinds (drawings, engravings, prints etc) with the effigy of the character.” 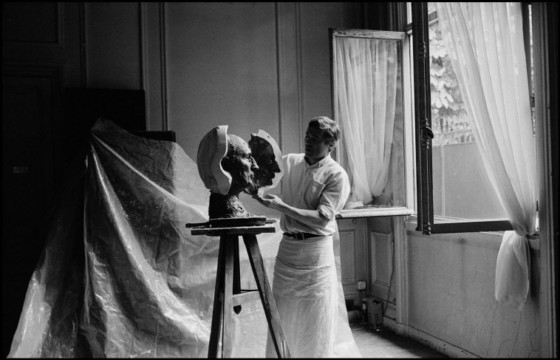 "The starting point for the realization of any wax figure lies in a search that could be described as ‘psychological’." Druet also casts on live models, as Le Querrec has documented. This process, unlike the distant formality of sketching or clay sculpting, requires the sitter to offer up their body in its entirety. One such sitter was singer-songwriter Serge Gainsbourg, who, in 1981, is pictured with his arm draped in plaster cast as his then-girlfriend, songwriter and model Bambou, helps him smoke a cigarette. Gainsbourg’s wax effigy was bound for the renowned Musée Grévin wax museum, where it still resides. 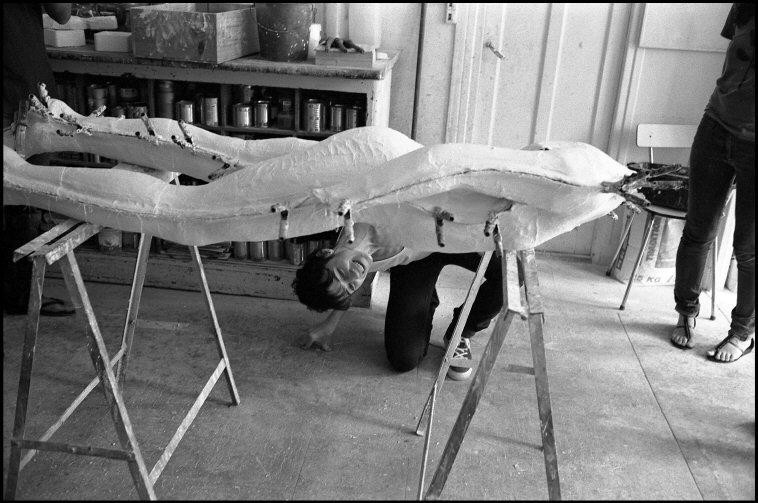 Guy Le Querrec Center, French actress and singer Charlotte Gainsbourg and her cast after a casting session on live model for the making of her a full-body wax effigy by Daniel Druet. With this wax effigy, Charlot (...)
te Gainsbourg portrays one of fashion company Balenciaga's historic model of the 1950s. This effigy, installed in the Balenciaga shop in Paris, will be dressed as the model in a historical photo. At the studio of French sculptor Daniel Druet. Saint-Ouen. Seine-Saint-Denis department. France. 2010. © Guy Le Querrec | Magnum Photos

The final stages in the creation of the wax effigy in when the person really comes to life; the face is painted, make-up is applied, glass eyes are inlaid (using real medical prostheses) and real hair is implanted into scalp and face. Through all of these stages Druet believes “it is essential that the sculptor has in mind the deep character of his subject”. Indeed, so lifelike should it be that upon final appraisal, one must be able to say: ‘I know him, I met him …’” 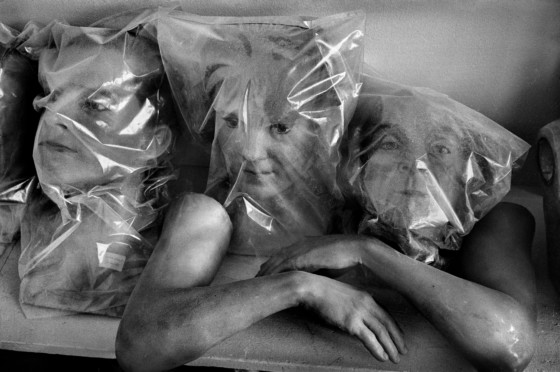 The President of the French Republic, François Mitterrand, posed for eight sittings with Druet from January to April 1982. During the eighth sitting, the sculptor, unsatisfied with his work, destroyed the bust. The final sculpture was realized during the pair’s last two sittings in October 1983, a year and a half later.

Druet, now 78, trained in sculpture at the École Nationale Supérieure des Beaux-Arts under  Louis Leygues, and gained early recognition for his talent; first prize in the Monumental Art Competition in 1966, and two Grand Prix of Rome in 1967 and 1968. His wax effigies can now be found in museums and private collections around the world. 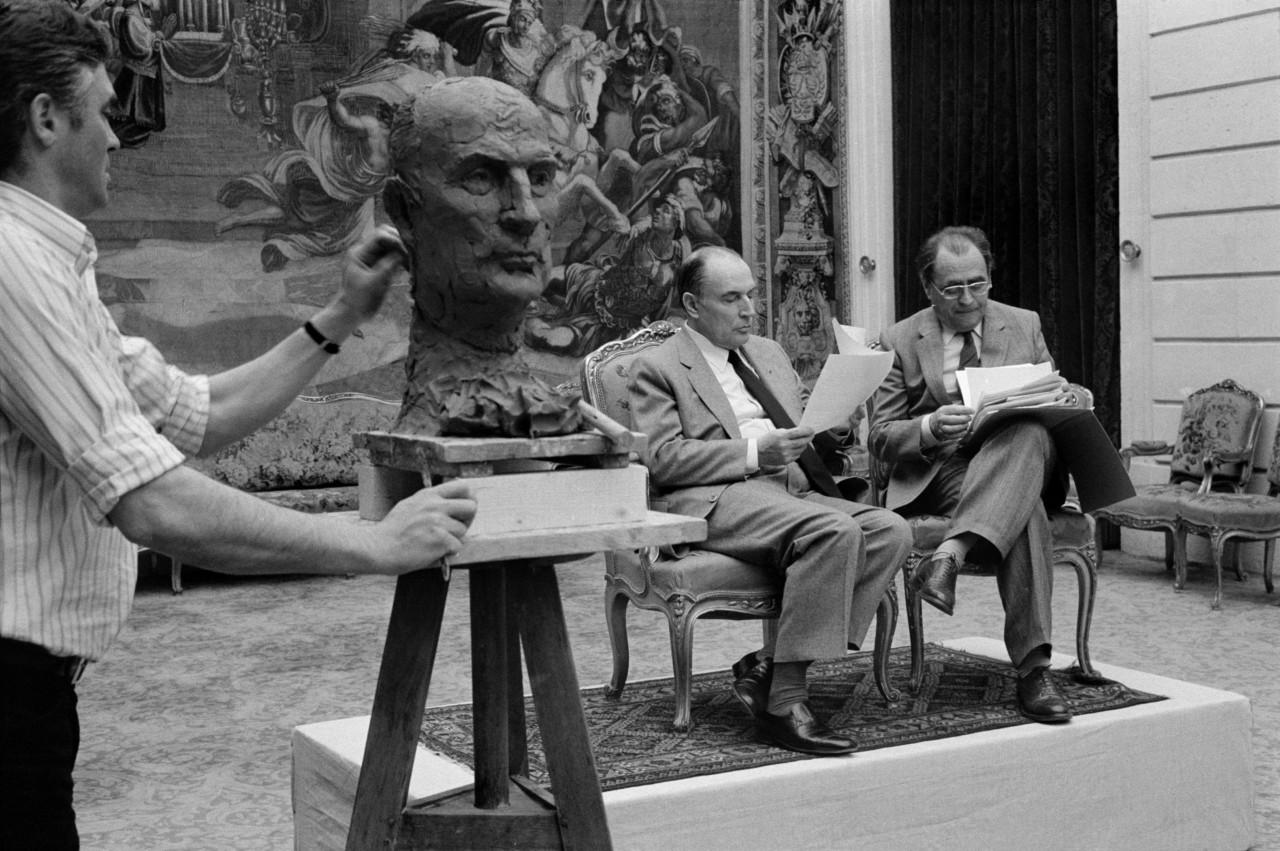 Guy Le Querrec Banqueting suite, Monday, April 26, 1982, between 12.30 and 13.30: 8th sitting. François Mitterrand posing for his bust by sculptor Daniel Druet. The President of the French Republic posed for ten (...)
sittings for sculptor Daniel Druet. During the 8th sitting the sculptor, unsatisfied with his work, destroyed the bust. The final sculpture was realized during these last two sittings a year and a half later. Paris. France. 1983. © Guy Le Querrec | Magnum Photos