Guy Le Querrec's photos convey the majesty, intensity, and cosmic unreality of the Arkestra front-man, who died on May 30th, 1993 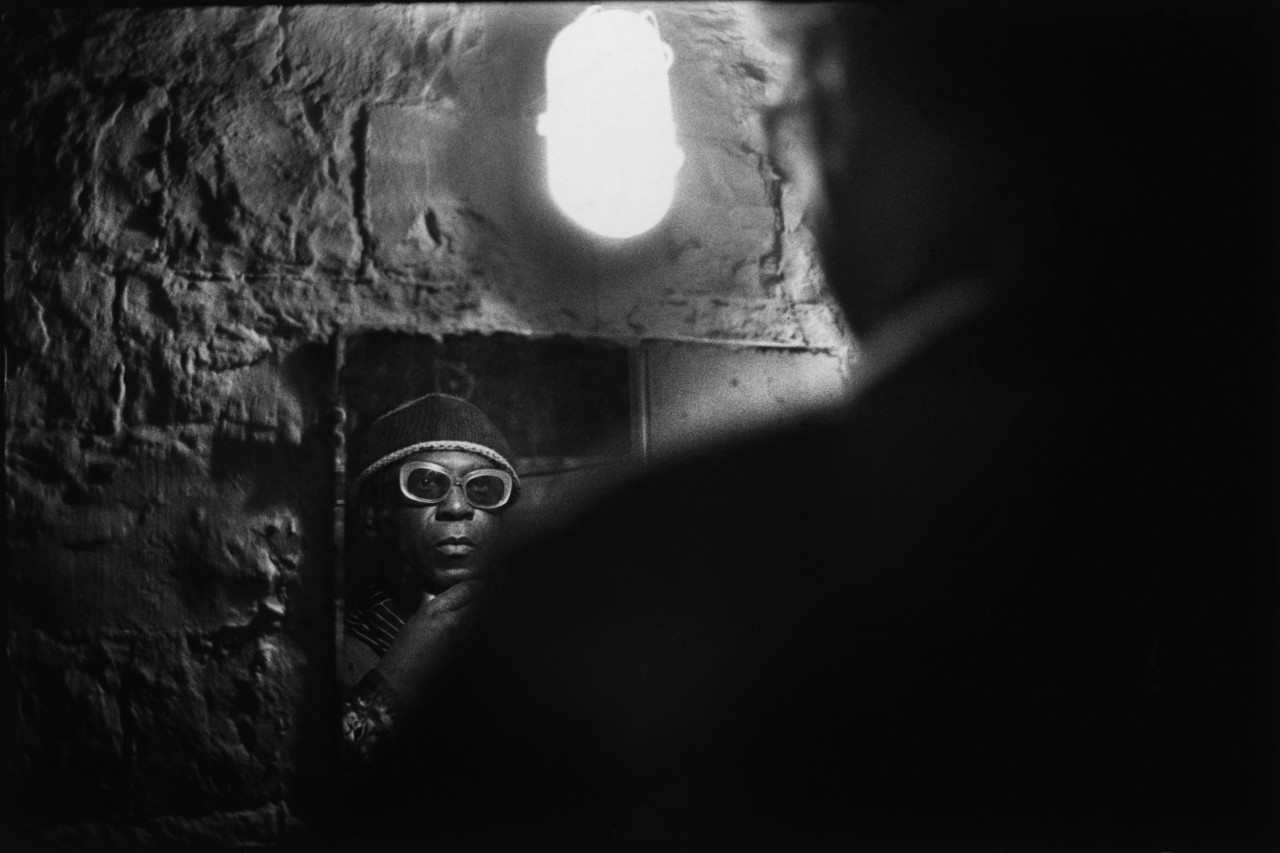 Guy Le Querrec’s photographic career has been intertwined with  jazz music from the outset, with his earliest work being made in London in the late 1950s, where he became immersed in the city’s jazz scene. Throughout his career the genre has been a constant, with iconic portraits of jazz greats, from Miles Davis, to Charles Mingus, Wynton Marsalis, Archie Shepp,  and Nina Simone studding his longterm projects. His photographs of Sun Ra and his band, most commonly known as the Arkestra, capture the group’s intimacy just as much as the leader’s otherness.

In the following extract from her 1977 book, ‘As Serious As Your Life ‘, which profiled the artists behind a vital, dynamic, and widely misrepresented new musical genre – free jazz – photographer and journalist Valer Wilmer delves into Sun Ra’s famed levels of inspiration and dedication. ‘As Serious As Your Life’ was recently re-released by Serpent’s Tail.

For a while, Sun Ra was Artist-in-Residence on the University of California campus at Berkeley. The Arkestra itself has moved to Philadelphia, but some things never change at the Sun Studio. Then, as now, it was not uncommon for Sun Ra’s apprentices to sit up half the night waiting patiently for the master to prepare an arrangement. Nearly all his writing is done at rehearsals, like Duke Ellington with the particular capacities of the individual in mind. ‘I write according to the day, the minute, and what’s going on in the cosmos,’ he says. ‘And actually each one of my numbers is just like a news item, only it’s like a cosmic newspaper.’

"I write according to the day, the minute, and what’s going on in the cosmos" Sun Ra’s music had already been a driving force for ten years when he and the Arkestra moved to New York in 1961. Even before they left their original base in Chicago, their devotees would ask those who had heard them play on consecutive nights, ‘Has the band caught up with Sun Ra yet?’ His innovations, not to mention his espousal of the idea of intergalactic travel and its implications for the human race, have always been in advance of the contemporary attitude, yet it has been suggested by one writer that he ‘tied in’ with New York’s growing free-form movement on his arrival. The truth of it was that he and his musical spacemen were already there. ‘If you’re going to talk about “avant-garde”,’ said drummer Clifford Jarvis, ‘Sun Ra is the first in that particular music.’

‘Musically, Sun Ra is one of the unacknowledged legislators of the world.’ Roger Blank, another drummer who played and recorded with him, paraphrased Shelley in an attempt to describe his influence. Saxophonist Marion Brown, who has studied and taught extensively, is convinced that Sun Ra is greater than Stravin- sky or Bartok, ‘And by my standards and by the standards I’ve acquired in getting my traditional education, I would say he is more creative than Cage or Stockhausen.’ 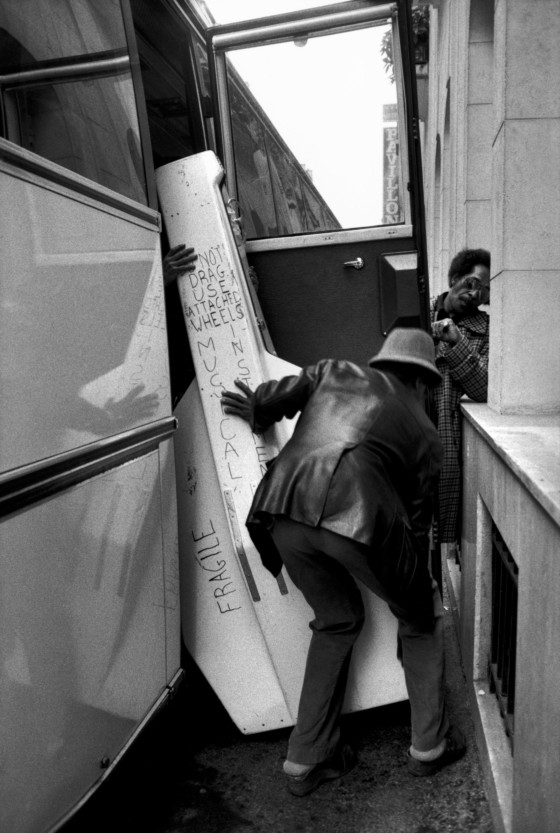 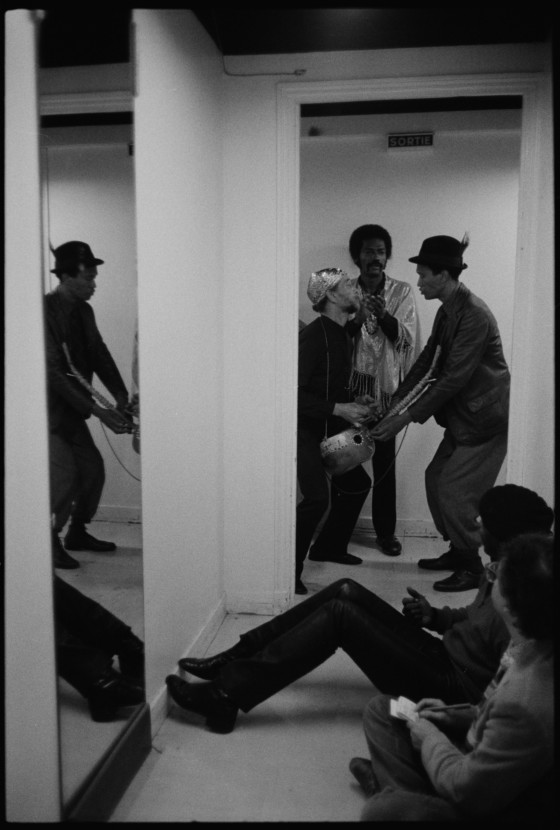 On a record made before an audience in Cairo, Egypt, in 1971, Sun Ra was asked to define ‘progressive music’. ‘It means keeping ahead of the time,’ he said. ‘It’s supposed to stimulate people to think of themselves as modern freemen.’

Sun Ra has become conspicuous for his colourful attire, dressing in a style seemingly derived from somewhere midway between Africa and the realms of science fiction. It has been years, in fact, since he has allowed anyone to see him in Western dress (although there is a film in existence made at a party in the ’fifties where the guests stood around, drinks in hand, asking each other, ‘Have you heard the New Music – this new jazz?’ and the answer was provided by Sun Ra, conducting the Arkestra, all of whom were dressed in white tuxedos). His musical explorations are invariably related to journeys into Infinity beyond the Universe itself. ‘The Heliocentric World of Sun Ra’, ‘Lights on a Satellite’, ‘The Others in their World’, are the kind of titles he gives his compositions.

"He was the first artist to speak of spiritual matters and the need for personal discipline amongst musicians." But these were idiosyncrasies. Sun Ra, who adopted the name of the Egyptian sun god and has always been deliberately mysterious about his origins, was ahead of the times in other ways. In Egypt, the Inspector of Antiquities told one of the musicians that he had never met anyone who could support the tremendous wisdom the name traditionally implied. Sun Ra has gone a long way towards doing so. He was the first artist to speak of spiritual matters and the need for personal discipline amongst musicians. Anyone who wanted to play with him had to accept a severe personal regimen – at least while they were in his company. Some of his shorter pieces even carry the titles of various numbered ‘Disciplines’.

‘Sun Ra runs his band like an army,’ a young saxophonist related from painful first-hand experience. ‘When he says, “Stand up!” they stand up. When he says, “Sit down!” they sit down.’ He even has one of their number stand guard at the door all night.

‘It’s like anything else,’ says Sun Ra. ‘When the Army wants to build men they isolate them. It’s just the case that these are musicians, but you might say they’re marines. They have to know everything. In their case, knowing everything means touching on all places of music. Of course they won’t get as much chance to play as other musicians, but on the other hand, they’re getting more chance to play.’