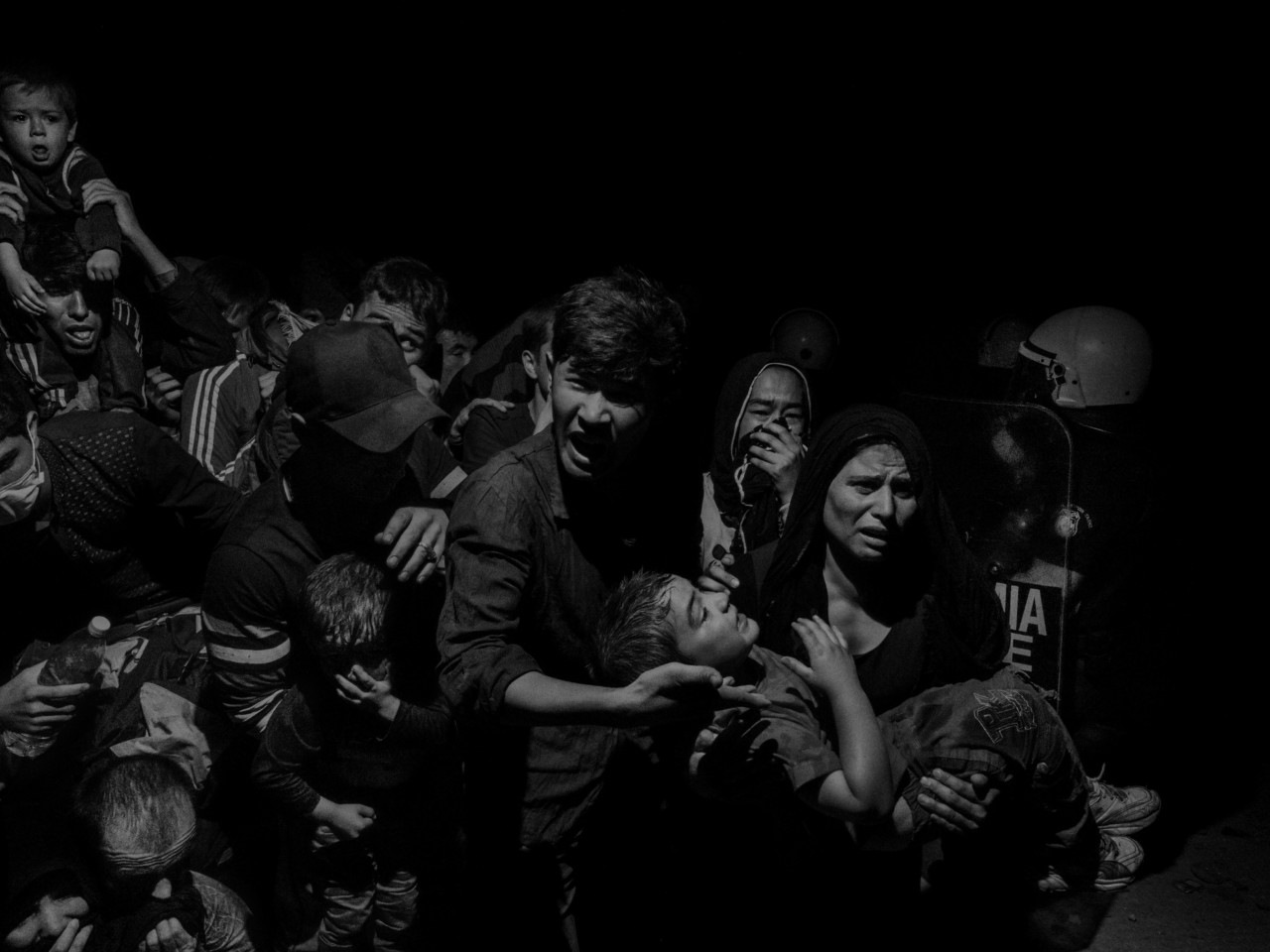 For Magnum photographer Alex Majoli, the line between reality and fiction has always appeared blurry. “When I was a teenager, taking pictures of weddings when I working as assistant with my master Daniele Casadio, I noticed that often when it came to the exchanging of the rings, if the couple didn’t feel the flash start up, they wouldn’t finish putting the ring on the finger! I remember all these moments from my life – I was always photographing theatre,” he reflects. Majoli has never seen himself as simply an observer of human life, but as an active participant in his own subjective documentation of it – both in his work as a photojournalist, lensing political and social crises across the globe for international publications, and in his myriad personal projects.

He is driven by the belief that “in any given situation, each person plays a given role in society” an idea derived from the work of Italian playwright Luigi Pirandello and his claim that “you who act your own part become the puppet of yourself.” It is this concept that underpins his latest body of work, Scene – a series of images taken over eight years, across continents, depicting political ideologies, humanitarian emergencies, and some quieter moments of everyday life, all bound together by an intense visual drama and striking use of light. A selection of these works form the subject of a new exhibition opening today at Le Bal in Paris, and an accompanying photobook, published by Mack Books. 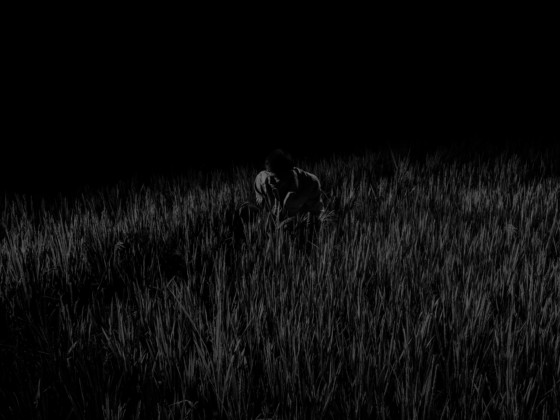 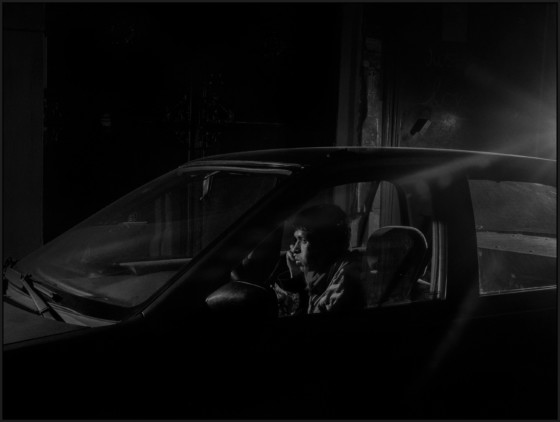 "I thought to myself, ‘What if I take lights, bright strobe flashes, and set them up around something happening in reality – a guy having a coffee, a market, a funeral?" The project has been a long time in the making, Majoli explains: “I began pursuing the idea of we human beings as actors playing our own roles in society around 2003 and set out to discover the best way to photographically and aesthetically represent this.” Seven years later, after much experimentation, he stumbled upon the perfect technique with which to do so. “In 2010 I thought to myself, ‘What if I take lights, bright strobe flashes, and set them up around something happening in reality – a guy having a coffee, a market, a funeral? What will happen if I create a space, a lit stage on which they can perform their own lives?’” he says. “Then, magically, the reality matched the theory! My assistant and I went out onto the streets of Milan and stood in front of a guy on the phone, with the flash right in front of his face, and he didn’t move. He stayed there as if nothing was happening! We rushed to the bus station and tried again, and the same thing happened – it kept happening. And so I kept expanding the field – going to Egypt, Congo, Asia, Brazil, Russia, to capture all kinds of situations, and everywhere it was the same!” 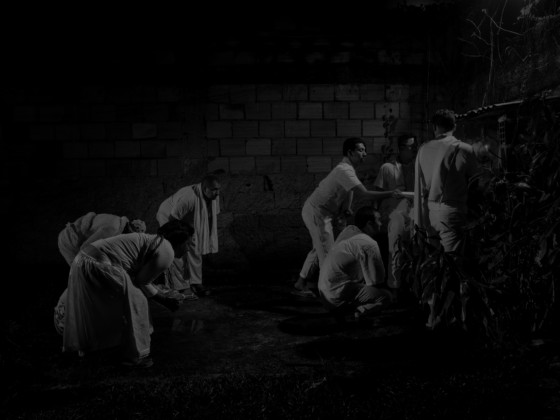 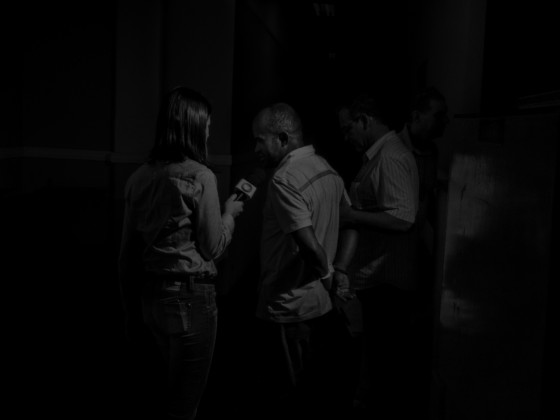 "If the world is expecting to be photographed, it exists in a perpetual state of potential theater" 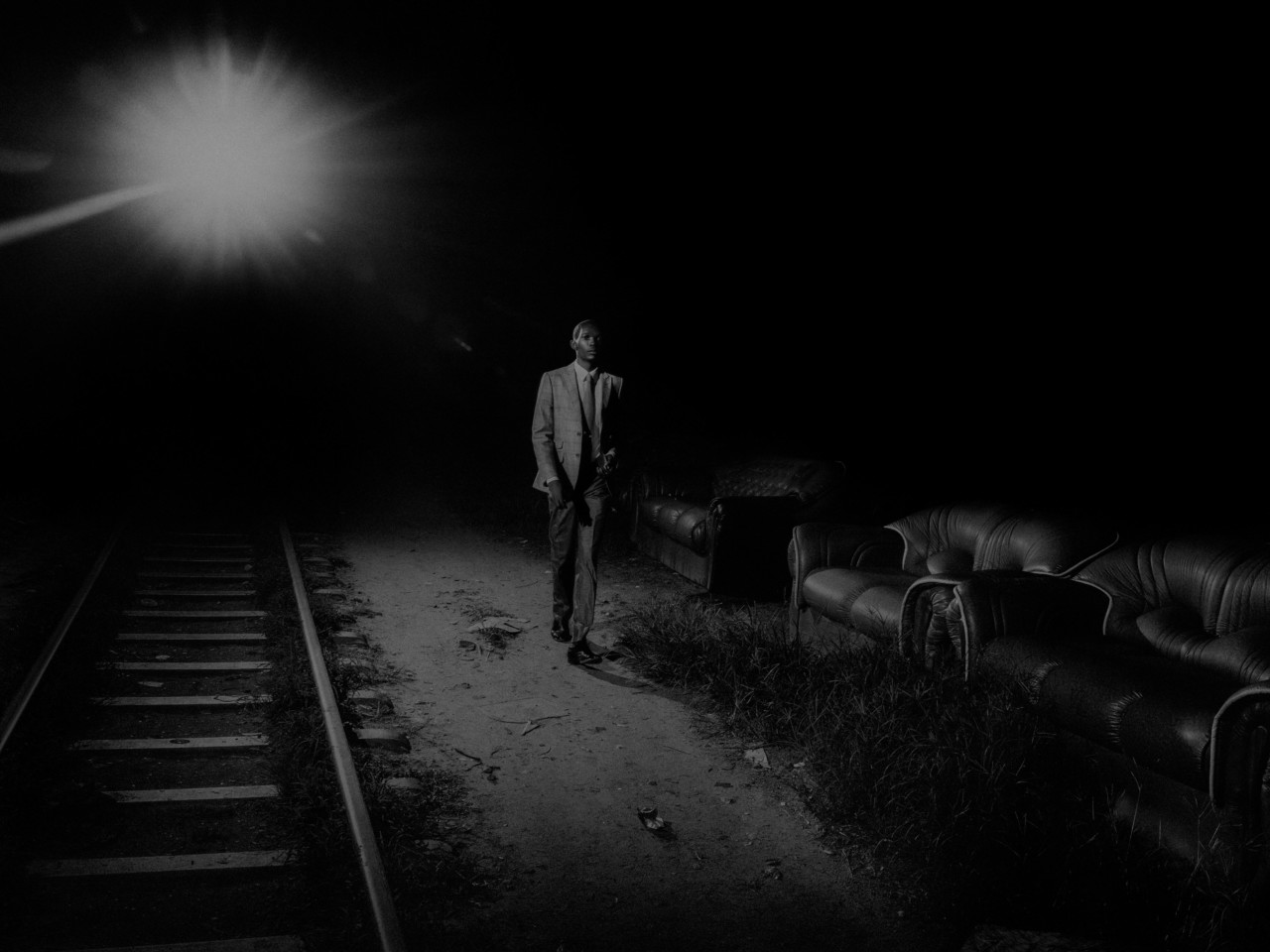 Not only did Majoli’s new method appear to leave its protagonists undaunted, it also produced a striking visual effect reminiscent of the paintings of Caravaggio, a key influence of Majoli’s. By using dazzlingly bright flashes to stimulate the “acting” of his subjects, the photographer, shooting in black and white, creates the effect of a night time tableau doused in sudden moonlight – luminescent figures emerge from dark shadowy backdrops, their gestures magnified; the very definition of theatricality. And yet Majoli never offers any direction to his “cast”, be they refugees in a Lesbos camp, Chinese commuters on a train,  demonstrators in Sao Paulo or gloomy Londoners in a pub, the day the Brexit process began. He simply sets up his equipment, and waits for events to unfold, continuing to note with awe the ways in which, before a lens, people soon shed their self-awareness and begin to “act themselves – except that they play themselves better, refine their life’s ‘performance’, somehow.” 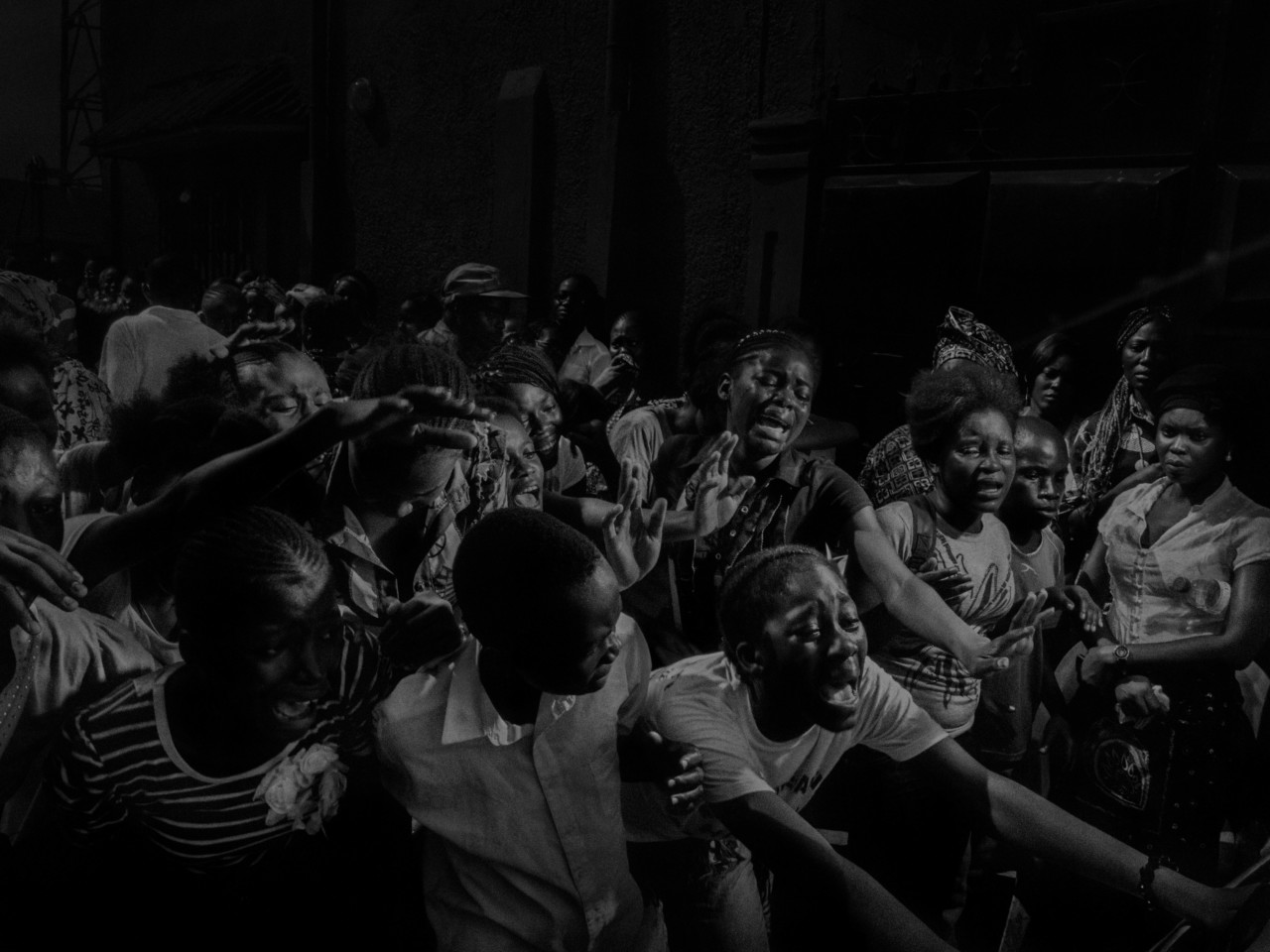 This, as David Campany, co-curator of the Le Bal exhibition, points out in his introduction for the book, throws up one of Scene’s most fascinating revelations – that in our current age, being caught on camera, be it that of a smartphone, surveillance system or professional photographer, is less an interruption than an expectation. “Majoli’s approach… constitutes a profound reflection upon the conditions of theatricality that are implicit in both photography and a world we have come to understand as something that is always potentially photographable,” he writes. “If the world is expecting to be photographed, it exists in a perpetual state of potential theatre.” That this applies even in most extreme of circumstances is even more extraordinary, as attested by a powerful image of a group of mourners at the funeral of a 13-year-old-girl in Congo, rushing forward with abandon, their outstretched arms and contorted expressions of unadulterated grief reminiscent of a Baroque lamentation scene. 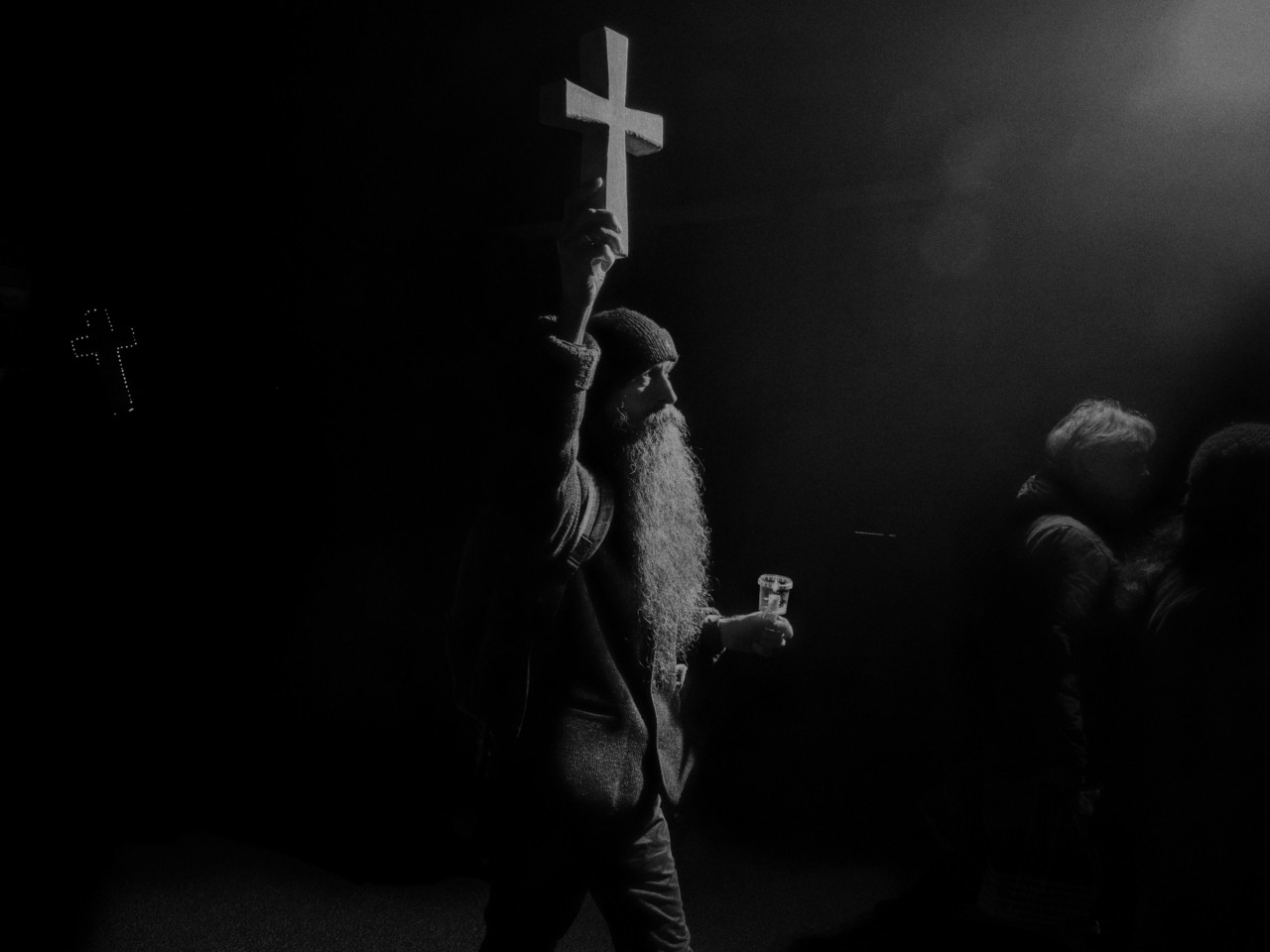 "You know the Greek philosophers in the past didn’t have the word ‘truth’, it didn’t exist. They substituted that word with the word ‘dialogue’" 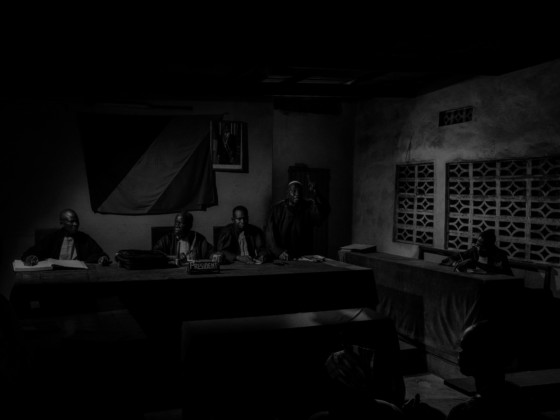 While the task of documenting human tragedy has always been a contentious burden for visual artists to bear, interestingly, this manner of capturing traumatic scenarios has in many ways allowed Majoli to more clearly delineate and accentuate his role as a participant in the proceedings. As Campany notes, “Majoli arrives, not just as a stranger with a camera, but with an emphatically strange performance, erecting tripods and lights, hanging around, waiting. What results from these theatricalised encounters between strangers are suitably strange pictures that allude to the very questions raised by [Georg] Simmel and [Luigi] Pirandello.”

Majoli is very clear that, for him, photographing the human condition has never stemmed from a desire to “be a missionary of truth”. Instead his aim is to pose questions. “It’s all about perception,” he says. “The more I documented and lived the lives of others, the more I realised that; what really is real, what really is true. Which is the right way to view reality? And I don’t think that one way’s better than another. You know the Greek philosophers in the past didn’t have the word ‘truth’, it didn’t exist. They substituted that word with the word ‘dialogue’ – which to me is super interesting, and something we should return to now more than ever: truth as dialogue.” 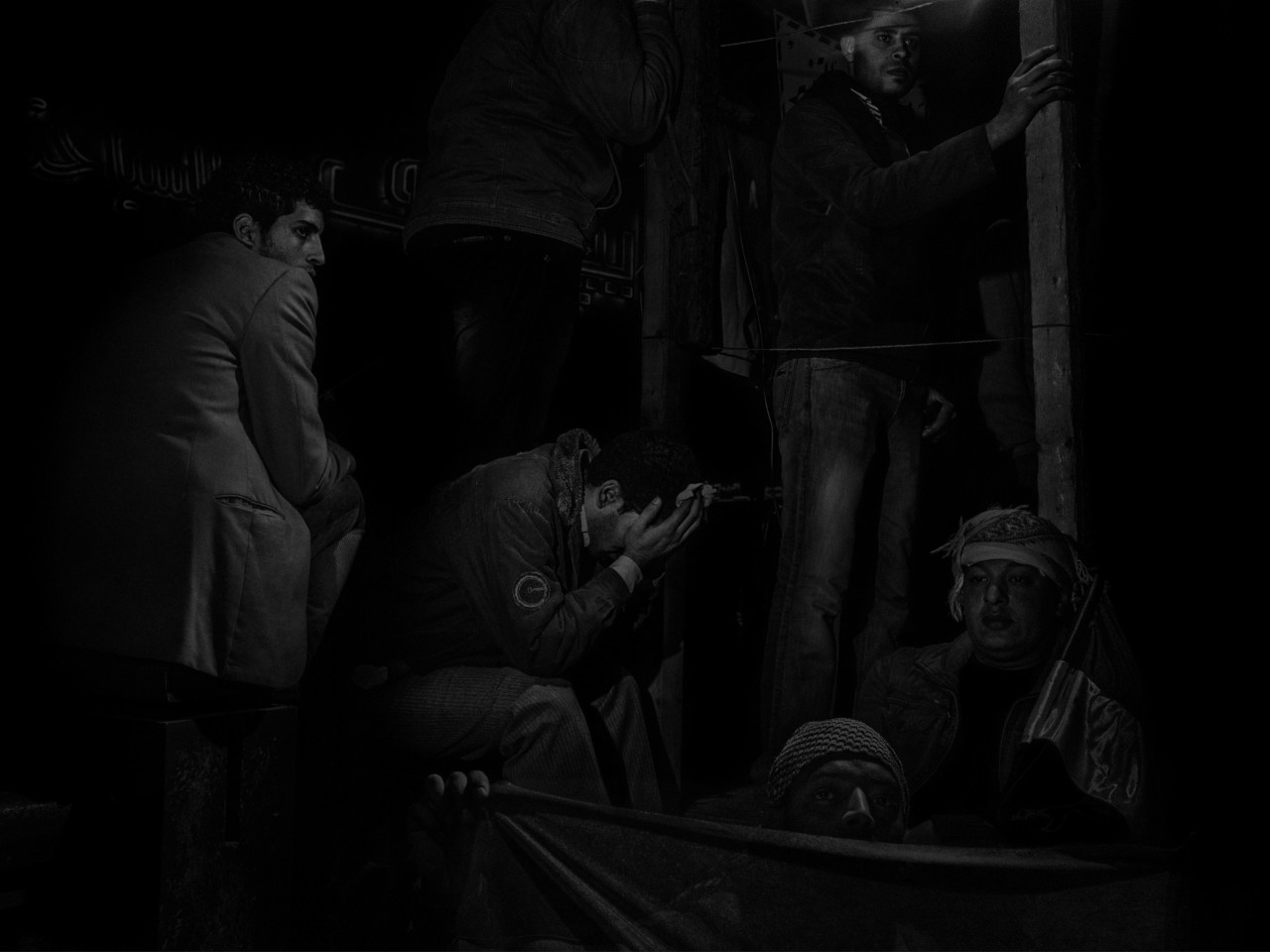 And with Scene, as Campany poignantly points out, Majoli is adding a radical new thread to the conversation. “As I see it, Alex Majoli’s proposition is that, quite literally, putting a ‘new light’ on the world and on photography might shed new light on both our aesthetic experience and our ways of knowing the world as pictures. His images do this not by resolving the tensions between artwork and document (they cannot be resolved) but by dramatizing them, making them thinkable in the midst of our pictorial and documentary encounter with the contemporary world.”

Inside the exhibition, on the walls we can read a quote from Bertold Brecht : “…we shall use every means, old and new, tried and untried, derived from art and derived from other sources, to render reality to men in a form they can master. ….. our concept of realism must be wide and political, sovereign over all conventions.”

Scene will be exhibited at Le Bal, Paris, from February 22 until April 28. More information on the show is available here. 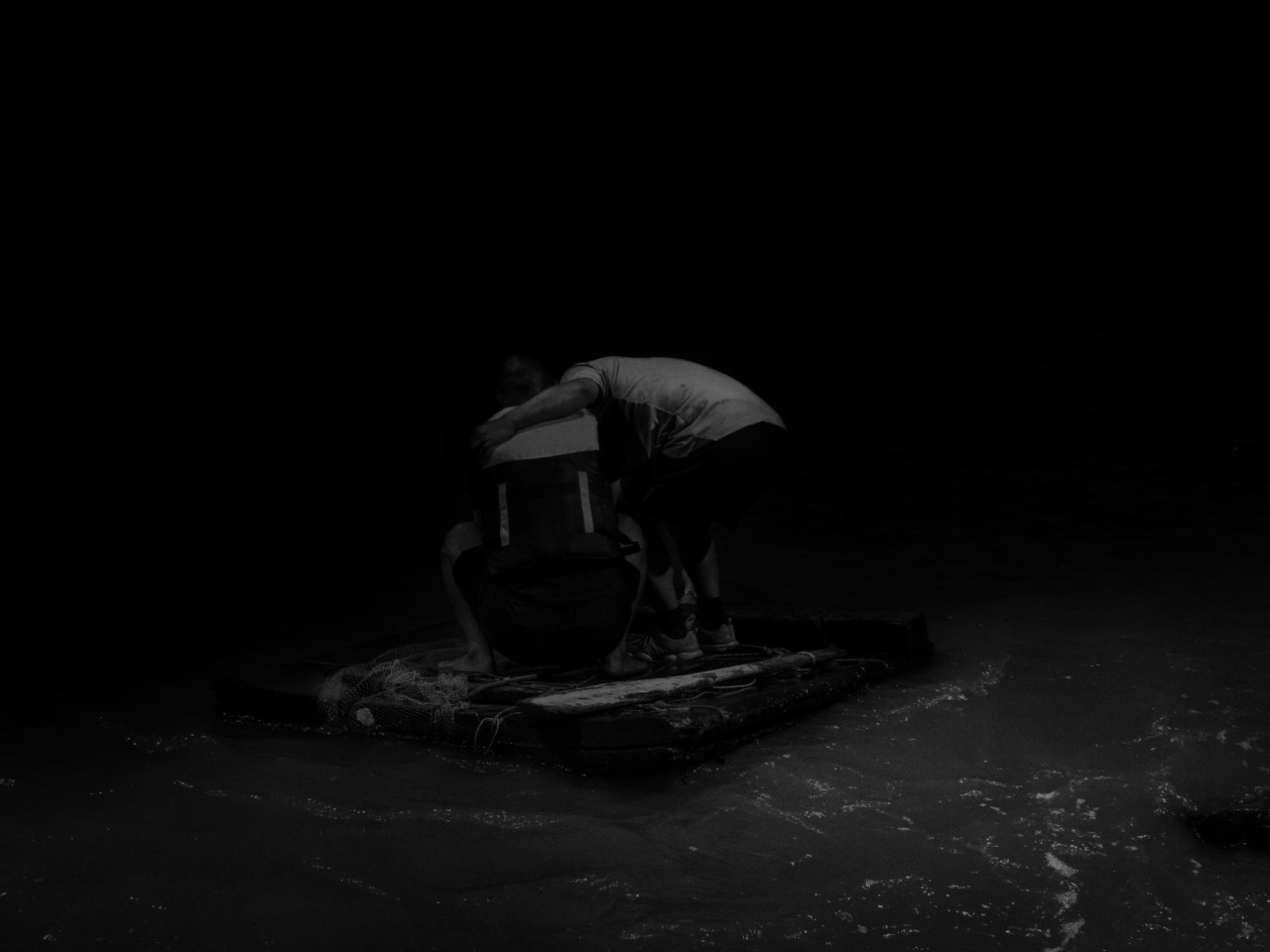 Alex Majoli Scene #4638. China. Shenzhen. 2017. A buddhist monk being transported to the boat from the shore. The boat is loaded with fish that will be released out at sea as part of “Life release”, or fangshe (...)
ng in Chinese, the traditional Buddhist practice of freeing captive creatures. Shenzhen. China. 2017. © Alex Majoli | Magnum Photos
License |