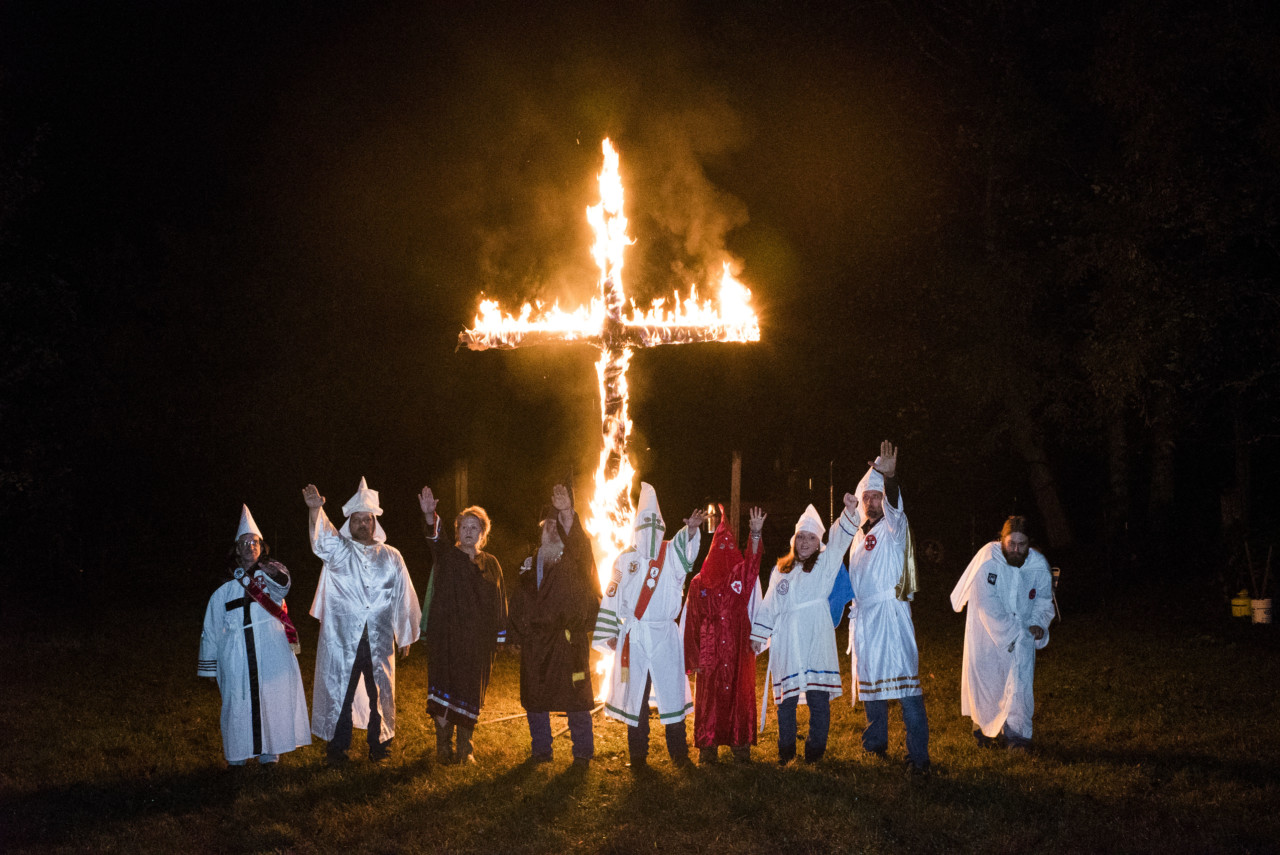 Peter van Agtmael A cross lighting after the wedding of two members of the KKK. For the KKK, the cross symbolizes Jesus Christ lighting their path (though burning the cross is taboo in most sects of Christianity). T (...)
hrough the history of the KKK it has also often been burned on the property of African Americans in order to intimidate them. Tennessee, USA. 2015. © Peter van Agtmael | Magnum Photos

The Ku Klux Klan is the name that covers three past and present movements in the United States that have advocated extremist reactionary currents, such as white supremacy, white nationalism, anti-immigration and, in later manifestations, Nordicism, anti-Catholicism and anti-Semitism. During the 20th Century, the third wave of the KKK rose to prominence in the 1950s and 60s, at the same time as – and in opposition to – the Civil Rights movement. The KKK, consisting of individual, independent groups and factions, were responsible for bombing houses of black people, especially those involved in the Civil Rights movement, in Birmingham Alabama, with similar attacks being attributed to the ideology country wide.

In 1999, the city of Charleston, South Carolina passed a resolution declaring the KKK a terrorist organization. Today, small factions of KKK-identifying groups continue to exist in the United States, particularly in the South, the epicenter of the Ku Klux Klan’s mid-century rise. This year, the KKK were in the news again, when ‘Ghost Squad’, which works for online hacktivists Anonymous, shut down the website of KKK chapter the Loyal White Knights of the Ku Klux Klan, citing their “blunt racism” in the name of free speech as their motivation.

When Peter van Agtmael set out to capture a portrait of the contemporary manifestation of the Ku Klux Klan in middle America in 2015, he was allowed in with two chapters in Tennessee and Maryland. Van Agtmael was drawn to this story following his near-decade of covering social justice issues in America, which began with a study of veterans returning from war. “Since then, my interests have expanded a lot into class, race and history and the KKK was an intersection of all of these subjects,” he says.

For a photographer, immersing into a group like the KKK presents a number of challenges: first and foremost gaining access, before considerations around navigating the documenting process itself come into play. Here, Peter van Agtmael offers some insight into his approach. "He mostly listened, but frequently pushed back to clarify the inconsistencies and vagaries of their beliefs"

Point zero in any documentary project is gaining access to your subject. In this case it came via a network of likeminded journalist friends. Peter van Agtmael connected to the KKK through Norwegian journalist Vegas Tenold, who he knew through a mutual friend, photographer Richard Mosse. Tenold has been working on a book about far-right groups in the US for several years and had become quite friendly with this particular group of the KKK. Gaining access is inseparable from gaining trust, which Tenold, achieved with a masterstroke of both charm and honesty.

“His manner with them was excellent,” says Agtmael. “He mostly listened, but frequently pushed back to clarify the inconsistencies and vagaries of their beliefs. I think this helped establish his reputation with them as someone who would represent them fairly, while not feigning common cause in order to establish intimacy. As a result of these good relations, they were quite open with me when we were introduced. I tend to work in the same way as Vegas, and find that transparency goes a long way towards establishing good relations with subjects. Most people want to tell their story, and if they feel you are telling it with nuance and care they are generally open.” 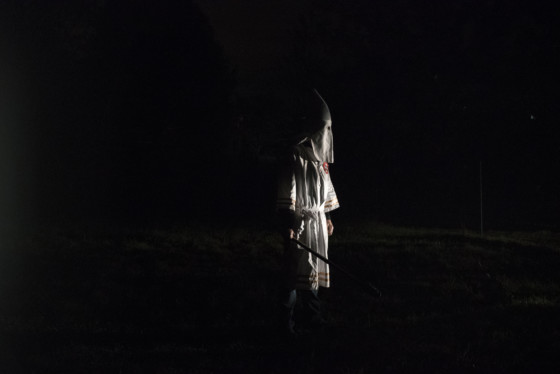 Peter van Agtmael A cross lighting after the wedding of two members of the KKK. For the KKK, the cross symbolizes Jesus Christ lighting their path (though burning the cross is taboo in most sects of Christianity). (...)
Through the history of the KKK it has also often been burned on the property of African Americans in order to intimidate them. Tennessee, USA. 2015. © Peter van Agtmael | Magnum Photos

While the practice of photojournalism aims to document for the sake of history, there’s an argument that it’s not beneficial to amplify the message of a hate group like the KKK by featuring them in the media. As such, a documentary approach with journalistic integrity requires a delicate balancing act: “The pictures are pretty unsentimental, so I’m guessing that most people don’t look at them and feel inspired by the KKK. At the same time, I hope they are fair. I felt I had creative freedom and amazing access to a unique event and I believe the merits of covering the KKK far outweigh the pitfalls if done thoughtfully. Everything in life is a compromise, the question is how you navigate those compromises.” 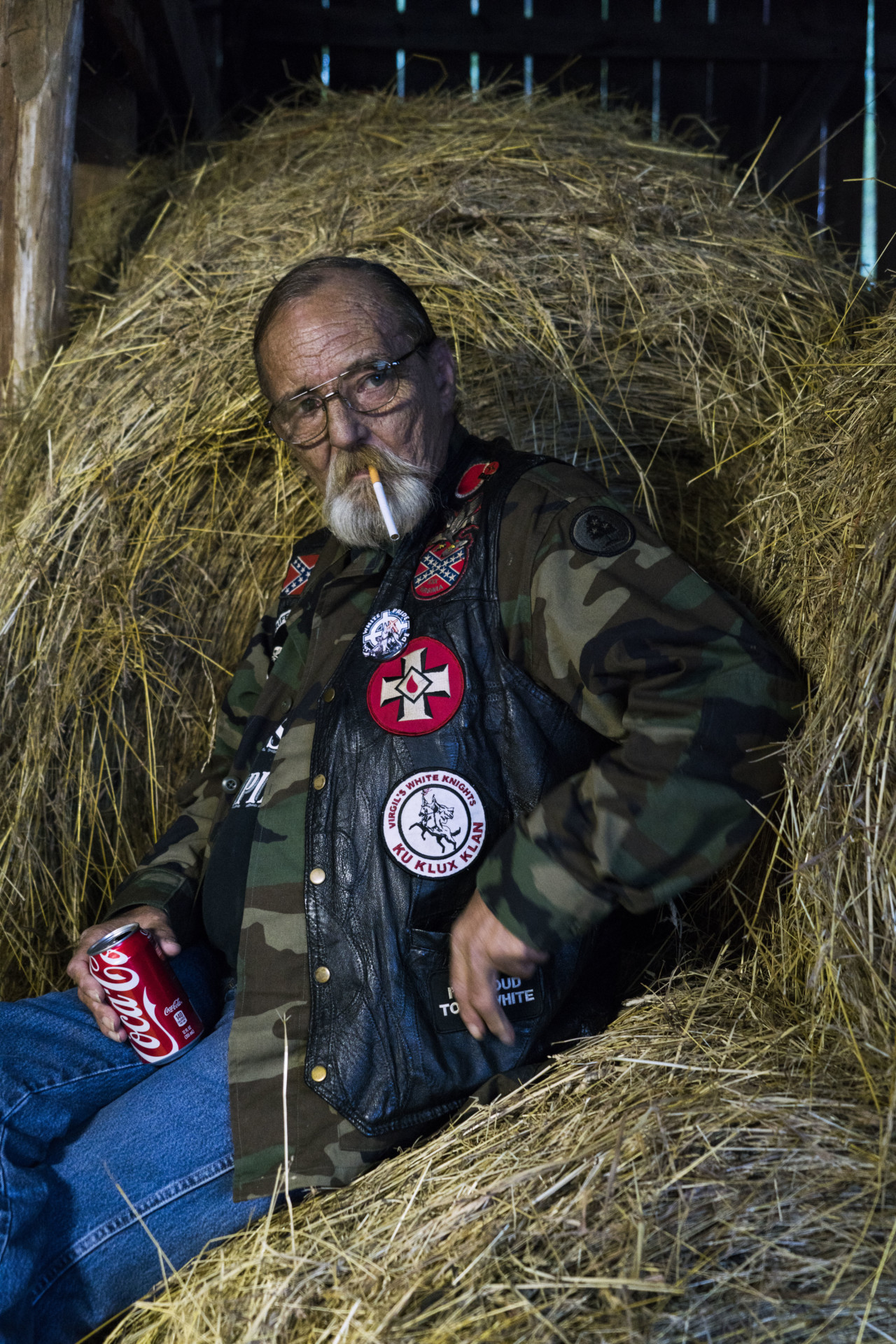 In order to capture the truth of a situation with any sort of documentary, getting people to act naturally, as they would if the camera were not there, requires some groundwork. Agtmael had a conversation with Klan members when he arrived about his presence, along with journalist Vegas Tenold. “Some opted not to be photographed and I respected that,” he says. “I asked those that were willing to be photographed to try and ignore the camera and not be too performative. Of course, this is impossible; people always perform for the camera no matter what you say, but at least saying it often avoids the most conspicuous kind of performance. Incidentally, I don’t mind some of the posturing. How people choose to represent themselves is at least as interesting and worthwhile as how I see them as an outsider.”

"There were plenty of terrible slurs being thrown around, some of them said specifically to bait us. I’ve seen variations of that tactic a million times. I tended to concentrate on photographing and didn’t get drawn into too many discussions" Working closely with the propagator of viciously provocative and potentially offensive views, conflicts with your own personal beliefs could surface. “There were plenty of terrible slurs being thrown around, some of them said specifically to bait us,” says Agtmael. “I’ve seen variations of that tactic a million times. I tended to concentrate on photographing and didn’t get drawn into too many discussions. After some anti-Arab comments were made I mentioned that my partner is Arab. The speakers seemed slightly ashamed that they made those comments in front of me. Like with any community, there are many layers of complexity and unexpected behavior. Most narratives we create are dramatically simplified. I don’t think that’s a particularly helpful way to view the world. Simple narratives have gotten us humans into a lot of trouble over the millennia.” 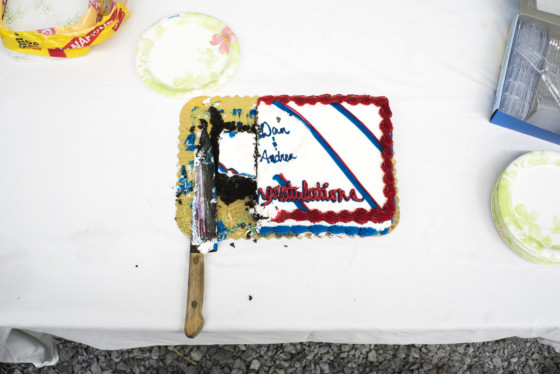 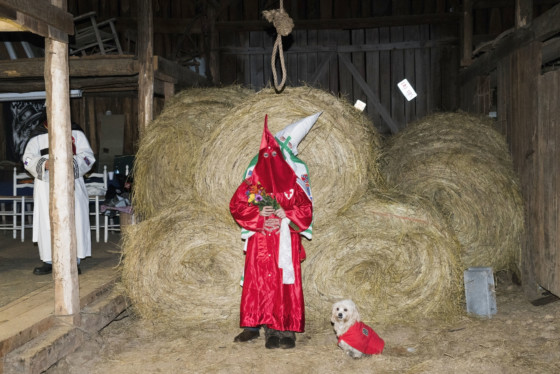 On Photojournalism: Going Behind the Story