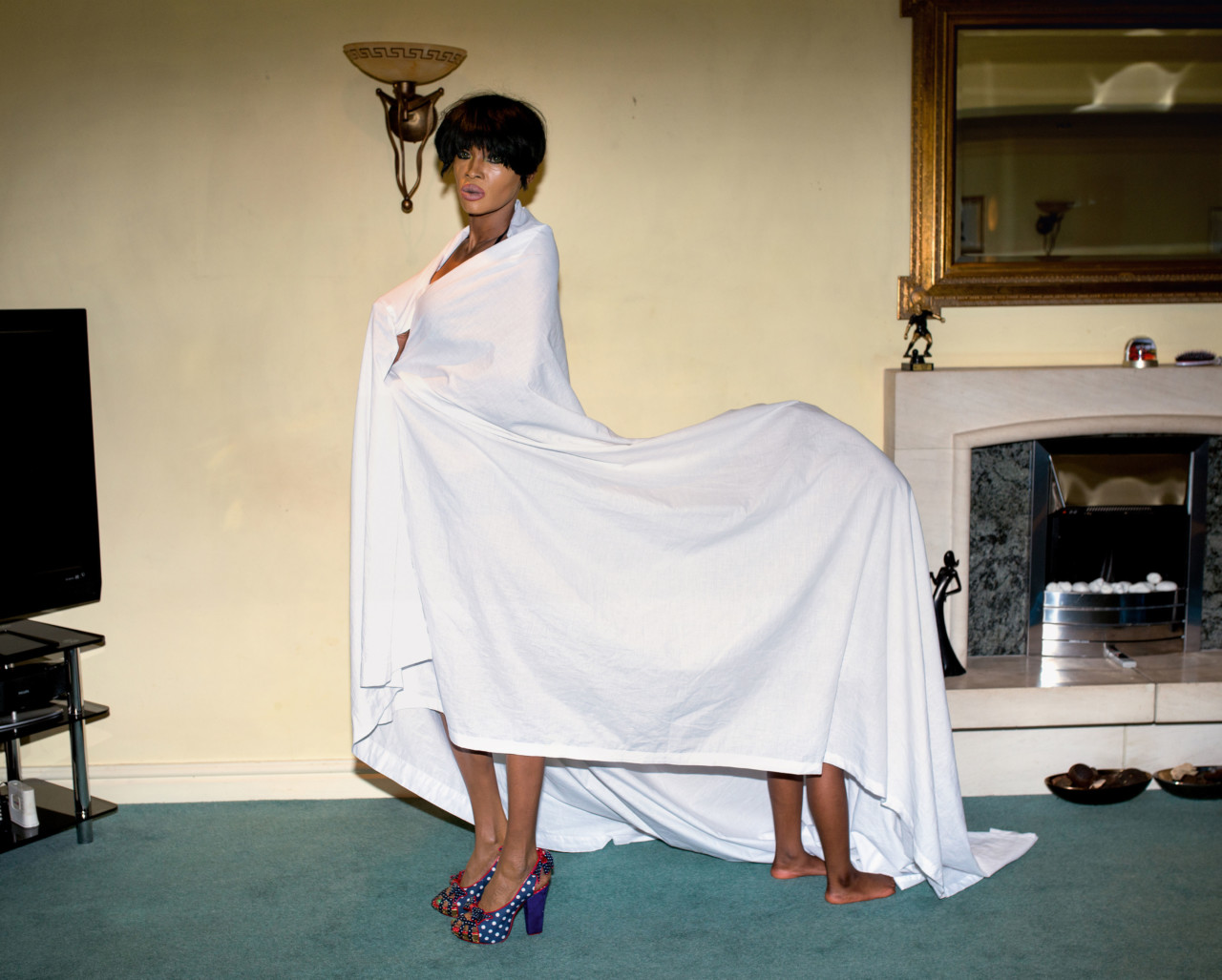 Creativity Works: Visual Storytelling with Magnum Photos was a 5-week course offered to young Londoners hoping to enter the photography industry. Produced by Magnum and Create Jobs (a London-based employability programme) under the mentoring of Magnum nominee Lua Ribeira, and experts from It’s Nice That, Anyways, and Lecture in Progress, fifteen 18-24 year olds each produced an individual photographic project in reaction to the theme, “What is Your London?”

Participants responded with creative and diverse interpretations of the brief, including intimate and striking portraits of friends, cinematic urban landscapes, witty street photography, and narrative series’ – both personal and universal. 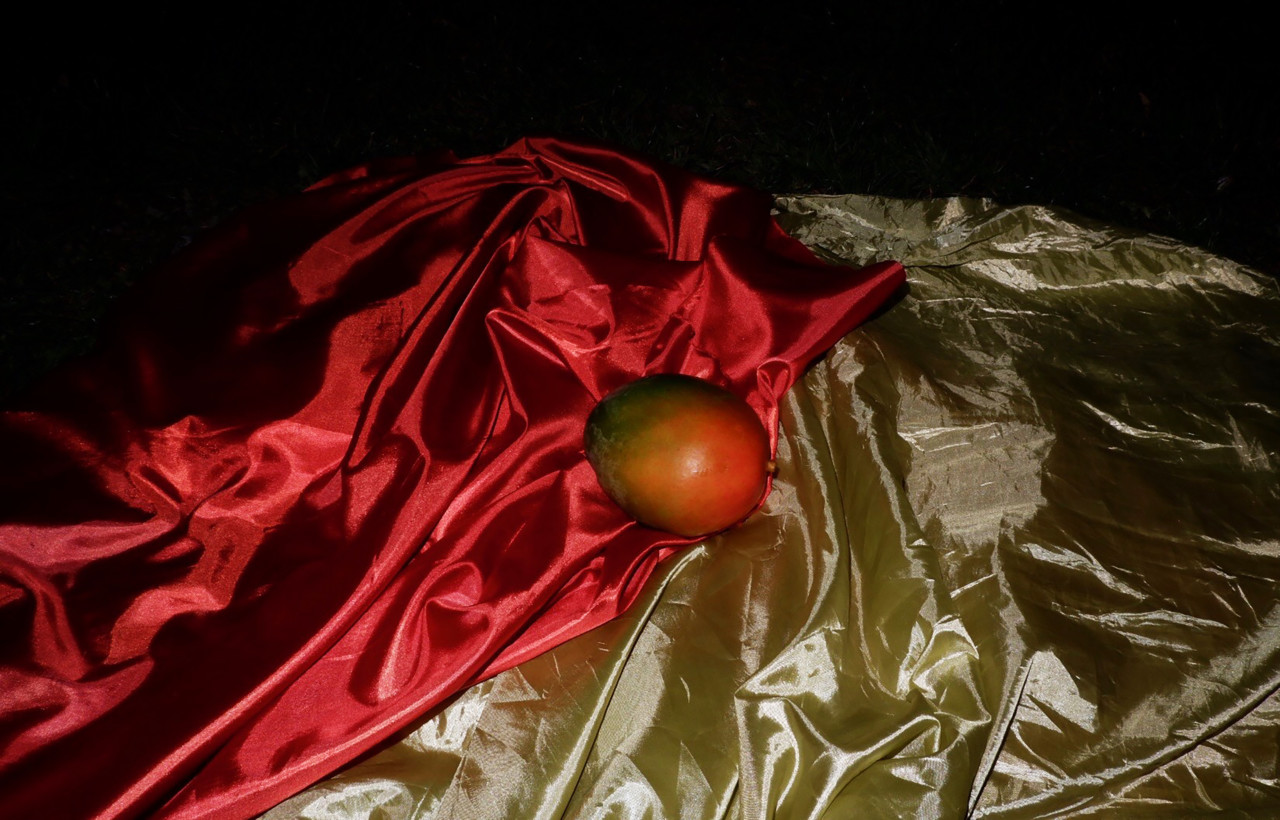 “I thought all the participants had a deep understanding of visual and photographic language, probably because they were all very young. However, this can be something both positive and problematic,” said Lua Ribeira. “It can be easier to create a coherent series, but can also make it harder to take risks and experiment. All of the participants were courageous enough to do this and use photography as a means to express themselves. It was great to share this experience with them.”

Ribeira selected six of the young photographers, whose work is featured here. We sat down with them to discuss the challenges facing emerging photographers, the impact of photographic training, and how, following the course, they are working collaboratively to support each other’s photographic aspirations.

Obstacles to entering the photography world

22-year-old Timi Akindele-Ajani, from Barking, feels that psychological barriers are one of the main issues on the path to becoming a photographer. Working in photography is often no longer a question of technical prowess, in his opinion. Rather, there is a significant cognitive leap to be made in order to define oneself as a professional, “like a metaphysical switch that you turn on.”

Akindele-Ajani’s project, See Me Not, is a visual entry point to discussing issues faced by people of colour and service industry workers. “Timi investigated the ones fully immersed in the city’s frenetic pulse,” Lua says of the work. See Me Not © Timi Akindele-Ajani 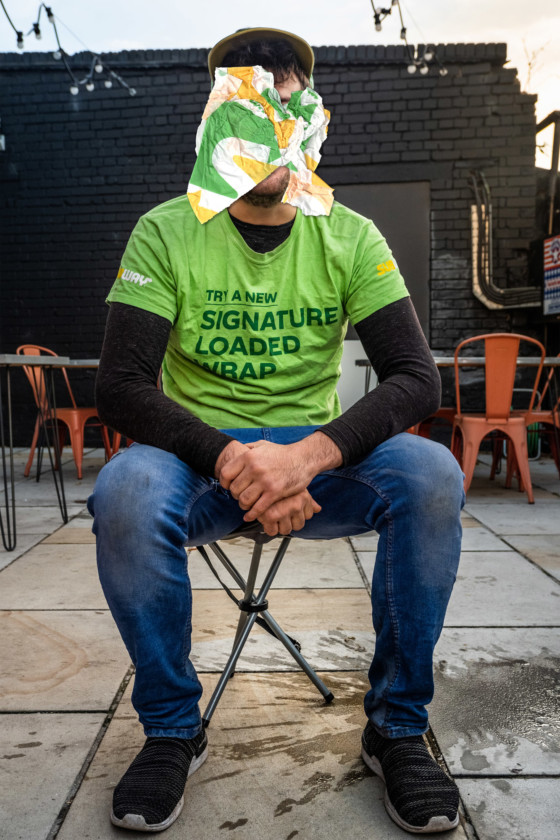 See Me Not © Timi Akindele-Ajani

"It reflects very well the moments, glimpses, that cannot be verbalized, but that we all see." Maria Quigley, 24, from South East London, speaks about the difficulty of honing one’s individual voice in order to distinguish oneself from the crowd; proving that one’s photography is unique within a “humungous pool of talent”. Quigley’s street photography aims to capture witty and ambiguous moments in day-to-day life. Of her project Businessmen and Pigeons, Ribeira says “It reflects very well the moments, glimpses, that cannot be verbalized, but that we all see.”

On the competitiveness of the photographic industry, Vanessa Ansong agrees. “Be it a good thing or bad thing, if many people can do it, the medium gets too crowded for your work to seep through, so you have to be absolutely unique in your ideas,” she says. Ansong is 22, from Dulwich. Her project Deep-Rooted poetically showcases her heritage through the textures and patterns of African prints. 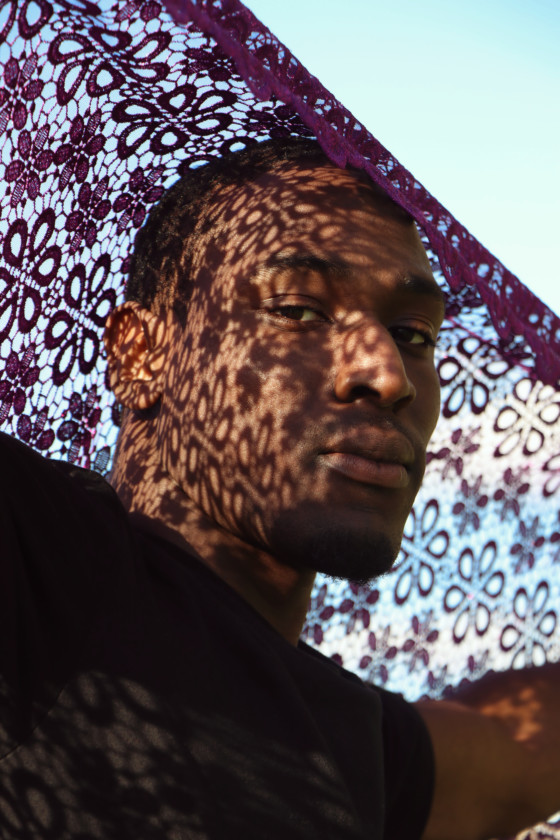 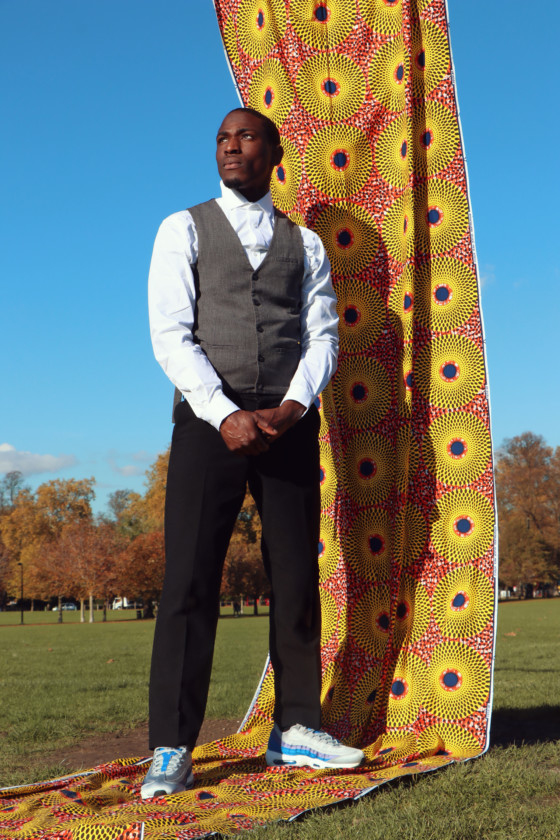 Competition in the photography industry is entangled with the democratisation of the medium, as Jacob Marriott says. “It’s a growing sector due to the range of professional cameras and tools available. As a result, there’s a lot of competition to provide a unique selling point that sets you apart.” Born in Hackney, 23-year-old Marriott is interested in photographing architecture, nature and the movement of society. In his Spectrums project, “Jacob makes a series of that archetypal image of the city, the future sci-fi city, that is already here,” as Ribeira says, “I always find it amusing and it fills me with joy. The joy that comes with the spectacular.”

"[Photography is] a growing sector due to the range of professional cameras and tools available. As a result, there's a lot of competition to provide a unique selling point that sets you apart." 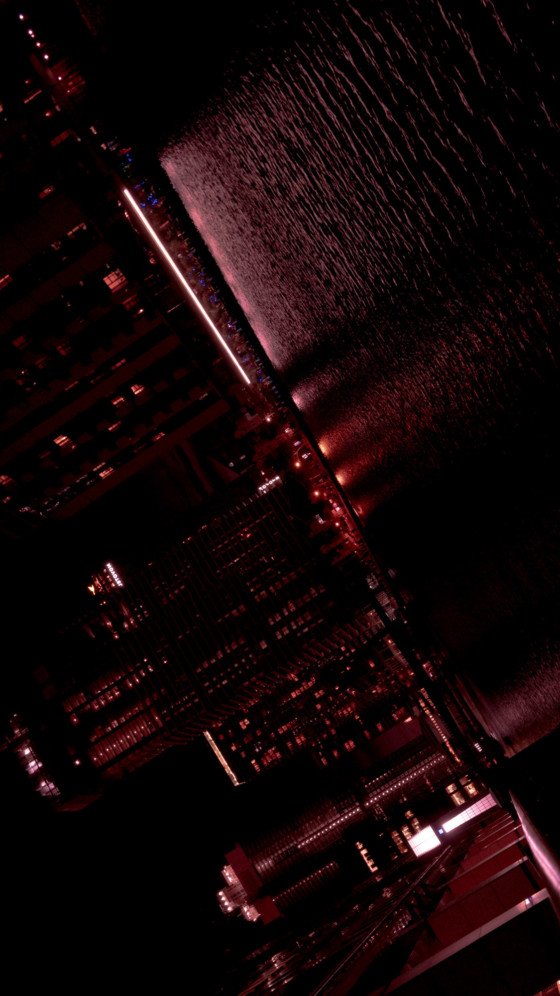 Building relationships with clients, and forging ‘soft’ connections through networking is another challenge. Eric Aydin-Barberini highlights the significance of particular “key-holders” who can provide access to industry spaces and conversations. It can be difficult to gain a sense of where these connections lie. “A lot of people struggle because there’s no outlined path. You’ve got to forge your own, whether it’s going to university, or not, or blowing up on Instagram.” Aydin-Barberini is 20 years old, originally from Cardiff, and now based in London. His project A Year’s Commute documents his memories of family and friends who have supported him through his journey moving from one city to the other. Quigley and Aydin-Barberini speak of the frustrations of being asked to work for free whilst at the same time trying to convince others of their professional credibility. “A lot of people ask you to come to their event and you think it’s because you’re getting invited,” says Aydin-Barberini, “but when you arrive, they ask you ‘where’s your camera?’” Akindele-Ajani agrees, “You’re always going to work to a certain standard as a creative. Yet if you are starting out, you have to work at that standard, but for far cheaper. Or for free.”

23-year-old Naila Tasnim, who was born in the USA, moved to south London eight years ago. She uses photography as a creative mechanism for coping with her emotions. Her project Mangos Don’t Grow in Mile End tells a personal story. “I thought this was a very interesting process, one which aims to unravel some of the strings that belong to her,” Ribeira says of the project. Tasnim says that a recurring issue for emerging artists is the disrespect, or tokenisation, they face because of age or background. “When we’re POC and from underrepresented backgrounds we are literally reduced to a charity case, nothing more,” Tasnim says, “I wouldn’t want to be ushered into spaces only because of my identity.”

Power and the Camera: Gregory Halpern on Intuition, Reflection and Representation 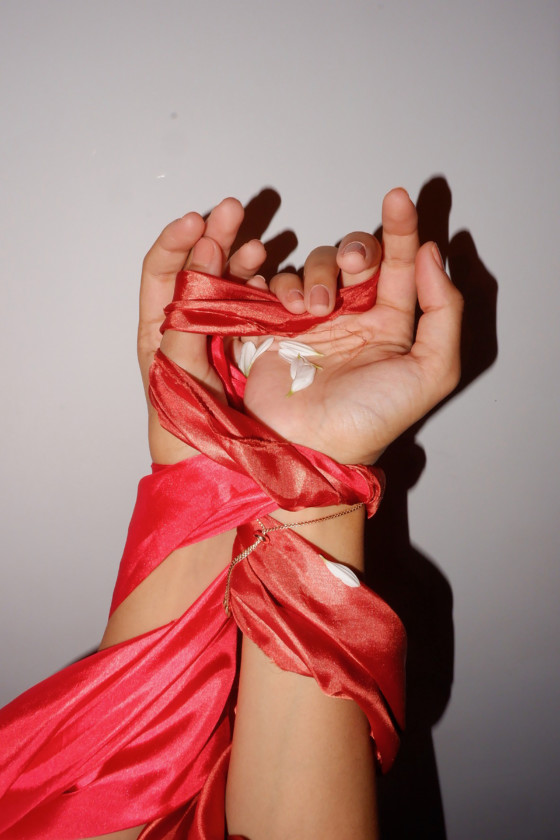 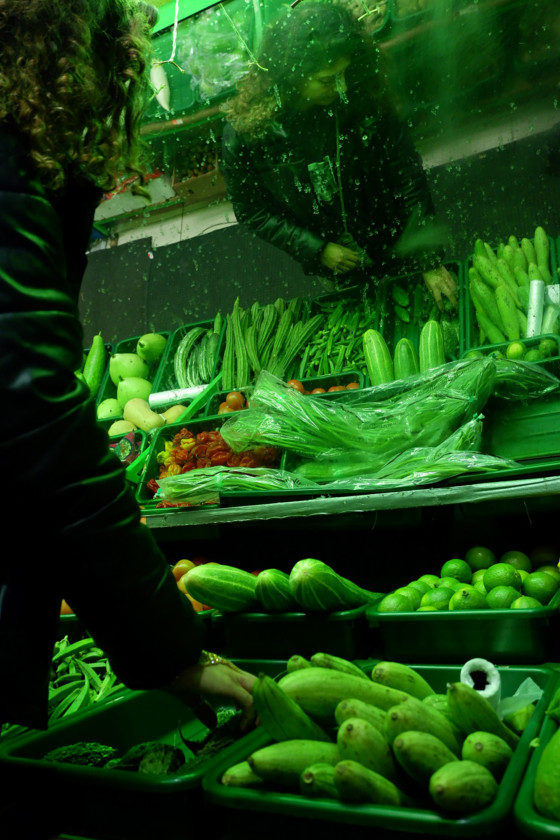 The group discussed recent experiences regarding press coverage of their work, some of which has been reductive or patronising in the way it has represented the photographers. They concur that the frequently simplistic nature of media language can be prone to missing the point of the work it is discussing: “It’s not as if this work is something that we stumbled upon, which can be their implication sometimes. ‘These Unemployed People Found Cameras!’” (“They have cameras?!” Ansong quips.) “Even though you’re put in these situations that are productive, the way they can be presented to people can be counter-productive,” Akindele-Ajani says.

Gaining skills; developing as a collective

Eric Aydin-Barberini says that the course has taught him that photographic projects can take shape in short time-spans. “In essence, in 2-3 weeks you could come up with an idea and solidify a project in that small space of time, and have people who are interested in giving feedback,” he says.

Vanessa Ansong says she has learned about the ways that the photography industry is changing; particularly, the ways in which social media can provide a platform. At the same time, face-to-face connections are just as important, a point that Timi Akindele-Ajani touches on:

The young photographers emphasise the impact of having their work taken seriously. Exposure to mentors and each other was an important source of validation and constructive critique. Naila Tasnim says, “Seeing my photography as a work of art that needs at least a 20-minute space to sit and be critiqued a few times a week, and receiving suggestions from people viewing me as an artist, was so necessary to achieve that shift in my brain [to self-defining as a photographer].” Maria Quigley says, “I appreciate that I have you [the other photographers] as a group and collective. People like Sonia [Jeunet, Magnum Education Manager] and Lua just being like ‘you are good enough’ – I think that’s been really important for me to keep pursuing what it is I love doing.” The participants of the course have formed a collective, OneFive, and are developing new projects which they hope to extend outside their own group. Their upcoming project Assigned By invites a creative mentor to set a brief which each photographer responds to, the results of which will be published in a zine. Through the zine they hope to open the themes out and invite responses from other emerging photographers in turn.

“That’s in the spirit of: in order for you to be that thing, you have to just start doing the thing. We’re using the zine as an opportunity to hold ourselves and each other accountable, try new skills, experiment, and basically as a “fail-safe space” where we can try new things and not worry too much about whether they work or not and do the necessary experimentation to allow ourselves to grow,” says Akindele-Ajani.

The group also plans to produce an event sharing the knowledge they have gained thus far, inviting other young creatives to cross-network with each other. Aydin-Barberini says: “It would be a space where people could come and hear other people who look like them, with similar backgrounds and interests, talk about their career in photography. […] Like the course again, but opening it up to people and allowing them to network and create the same relationships as we did, but on their own terms.”

This programme was made possible thanks to a grant from the Mayor’s Fund for London with in-kind support from Fujifilm UK and Creative Hub.

Applications for the next Creativity Works: Visual Storytelling course are open until September 30, 2019. You can find more information and apply here.