Dawn breaks on Newlyn, an industrious fishing harbour in southern Cornwall. Seagulls scream and circle a sardine hauler that has just come in from a night out at sea. As the dusty light floods the water, two fishermen haul tons of their slippery catch into orange crates. It’s been a bountiful trip and it’s only the beginning of the sardine season. Most of this load will go to canneries in France and for these fisherman, a strong trade relationship with the mainland is their livelihood.

The sight of a flotilla of boats charging down the Thames just days before the June 23 referendum was arguably one of the most surreal sights of the 2016 Brexit campaign. But while it may have erred on pantomime, it highlighted deeply-felt frustrations shared by fishermen across the UK, whose unhappy prospects—until then—hadn’t made headline news.

The fishing industry was held up as one of the unequivocal beneficiaries of Brexit; an exit from the EU was said to be the only way to resolve the “unfair” quota system fishermen had been suffering under for more than 40 years. The picture painted by the Leave campaign was that UK fishermen were unanimously against remaining in the European Union. But the reality is, inevitably, more complex. 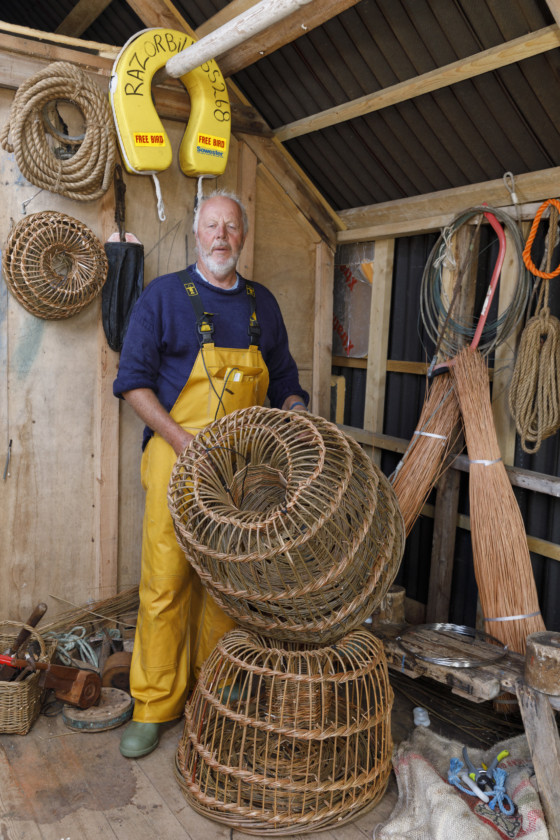 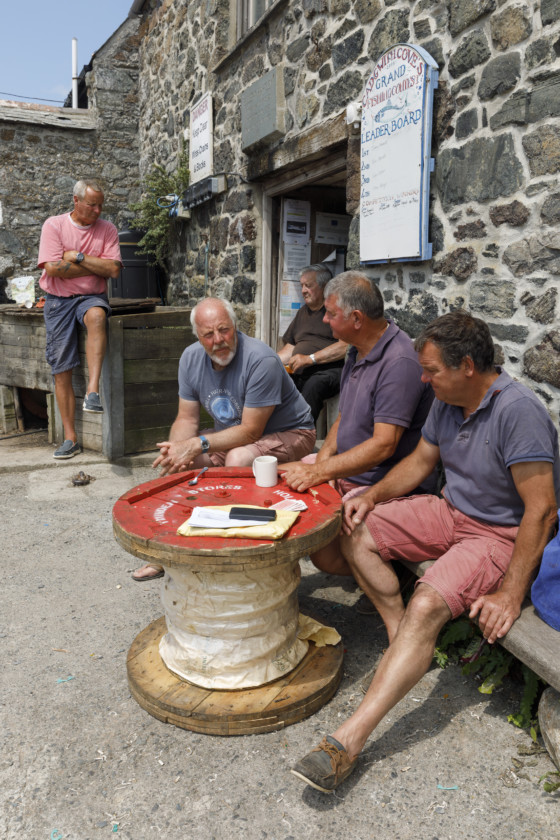 Photographer Martin Parr, who spent time in Cornwall documenting fishermen as part of a larger project on Brexit, was surprised to find that the fishing community wasn’t the Leave stronghold one had been led to believe. “I’ve got a chapter in a show in March [at the National Portrait Gallery] about Britain in a time of Brexit and this was spot on that subject matter; fishermen are known to be hardline Brexiteers,” he says. “But it wasn’t as clear cut as that when we got there. I also found people who were much more considered and appreciated the Remain vote may not be so bad for the fishing community after all.”

Speaking from the docks of Newlyn, an industrious fishing harbour in southern Cornwall, fisherman Reiss Fyffe appeared exasperated by the cracks that continue to cripple Camp Brexit. “I didn’t believe what was being promised by the Leave campaign and it looks like I was right to think that,” Fyffe says. Although he concedes that current quotas are hurting domestic fishing capacity, he believes that potentially losing out on a trade deal with Europe would be catastrophic. 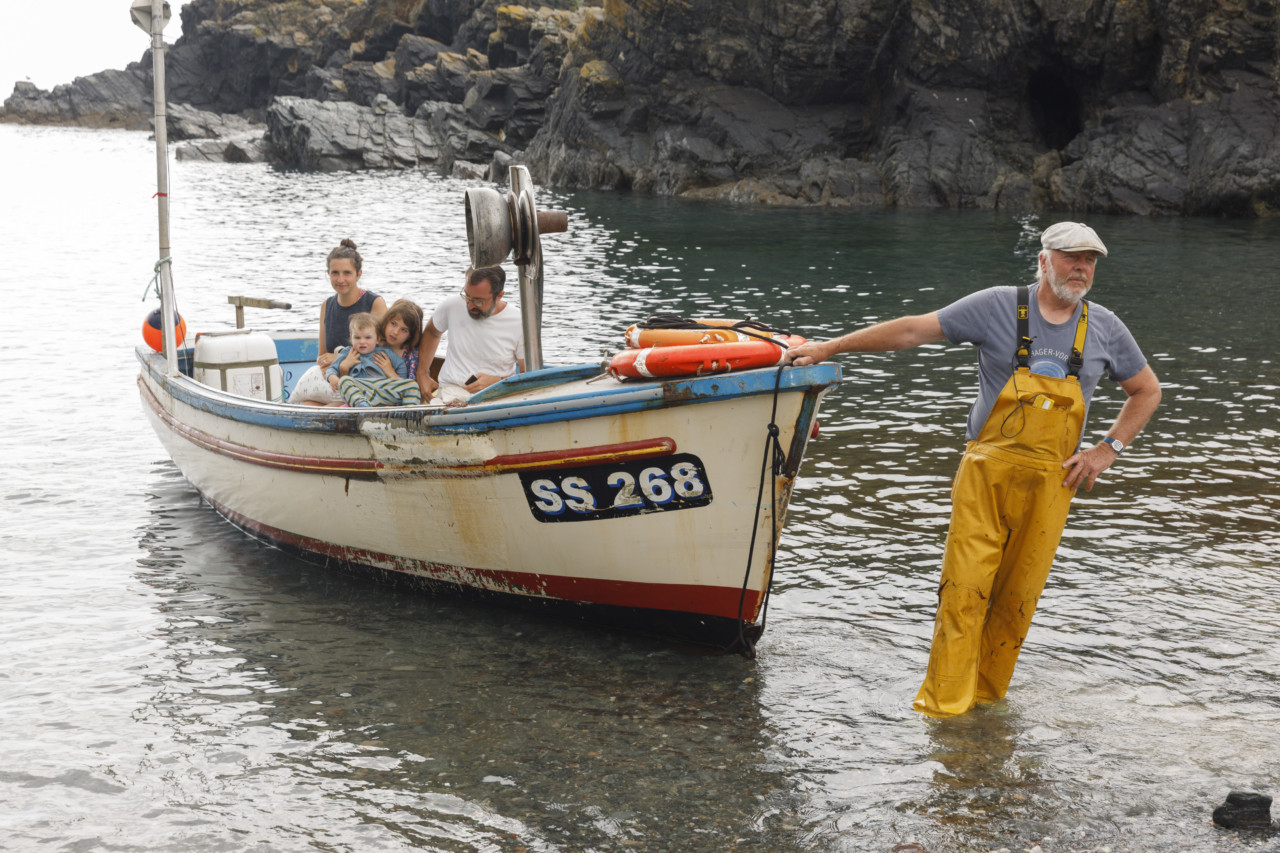 Europe imports roughly 75% of the British catch, which amounts to 40 species, mostly too exotic for domestic consumers.  “We won’t be worse off in terms of quota but where will all our fish go?” says Fyffe. “A lot of people had blinkers on; ‘Oh yeah, we will be able to catch as much as we want if we leave”. But if there’s no market for it, what then? I’m not that shallow minded.”

European boats may dominate British waters—60% of the tonnage of quotas within Britain’s 200-mile limit goes to non-British boats—but Fyffe doesn’t feel resentment towards foreign fishermen. “These big French fishing boats also have a quota to fill,” he says. “I’m a fisherman, they are fishermen. They didn’t pass that law, our government did. The way our government is going to solve this problem is to start stripping other countries of their fish essentially and that’s not right. Our situation isn’t fair but the government won’t hold themselves responsible.”

Nigel Legge, a 67-year-old small-scale fisherman, fine artist and traditional lobster-pot weaver, who has been fishing since he was five-years-old, also absolves “pillaging” foreign boats and Brussels from shouldering the entirety of Britain’s fishing woes. Speaking from his multi-purpose workshop in the impossibly quaint fishing village of nearby Cadgwith, Legge bemoans the restrictions placed on inshore fleets by national government. 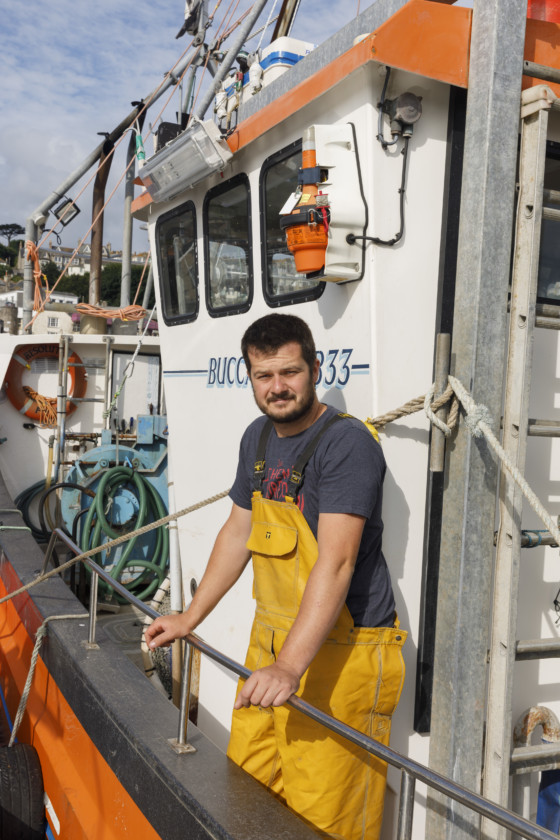 “Small boats should still have rules and regulations but they aren’t big enough to hurt anything,” says Legge, who argues that the ecological impact of smaller boats—generally measuring 10 ft or less—is minor compared to larger trawlers. Yet, British fishing law dictates that inshore fishing—within the 12 mile radius—is allowed just 4% of the total English quota. “The government think fishermen are raping and pillaging the ocean, which isn’t true,” he adds. “They can’t understand that these small boats fishing off the beach are completely different to these large ones that cost millions and are out at sea.”

As a result of these challenges, Legge has diversified his income. As well as catching lobster, crab and white fish—which on a good year will earn him £10 to 15,000—he makes a living selling his nautical oil paintings and building lobster pots. “Years ago, you either made your own pots or you didn’t go fishing,” he says. “Now, they’ve been replaced with sturdier steel and plastic ones.”  Legge, who is one of just a handful of fishermen still making pots in the traditional way, still uses his willow pots to catch but mostly sells them as souvenirs or to film and TV productions like Poldark. Meanwhile tourists are invited on his boat in the summer, for a fee, to experience this antiquated practice first hand. “Tourism is bigger than fishing in Cornwall,” he adds. “If they’re not careful they’ll eradicate all these small places and that’s more of a loss than what the fishing is.” 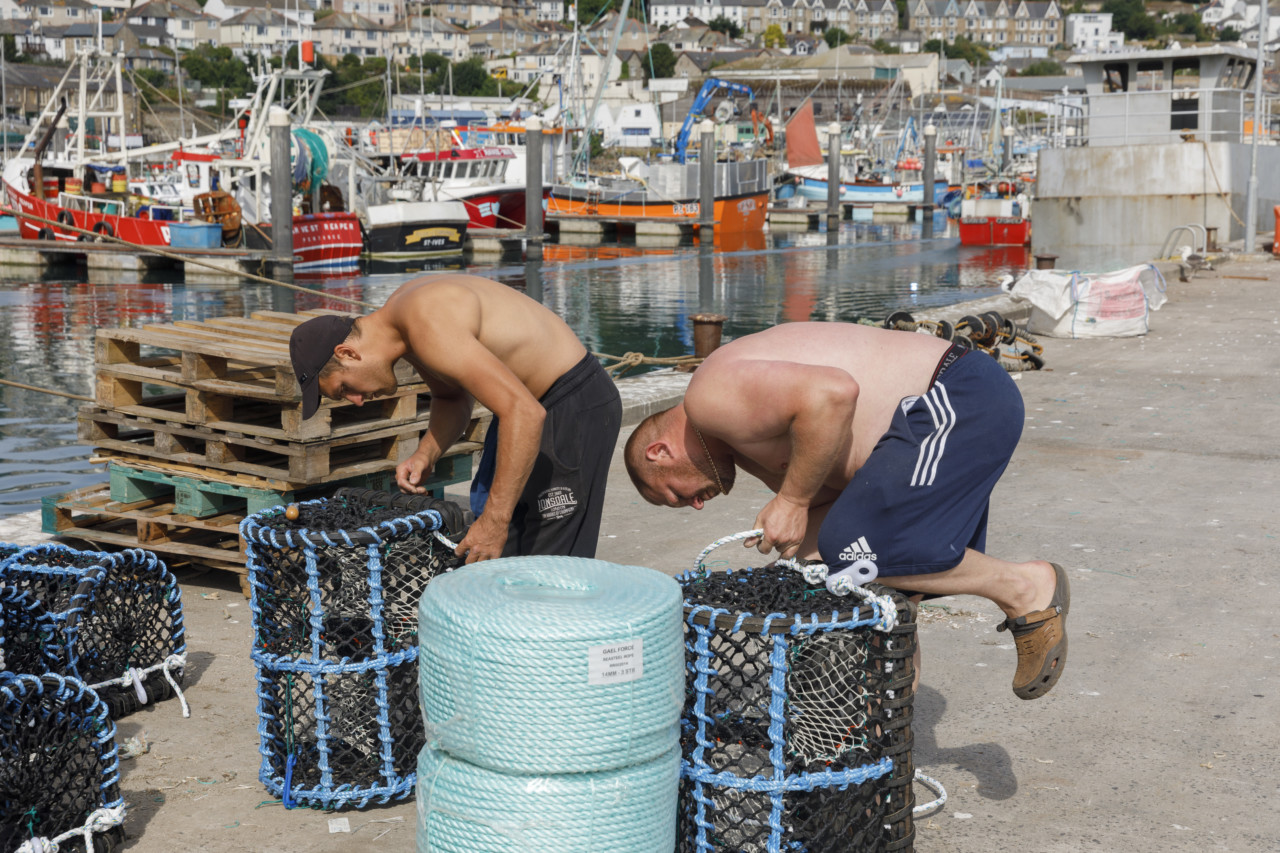 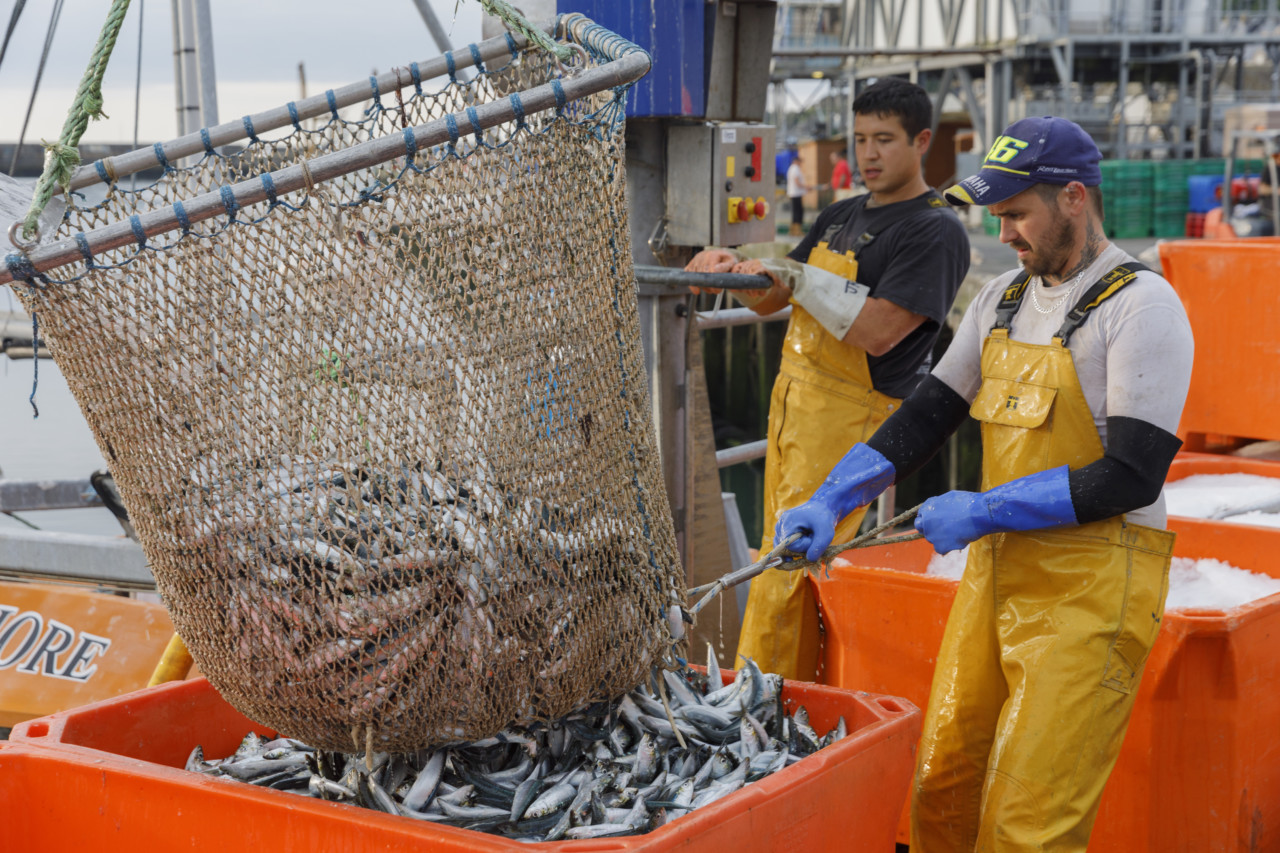 Legge is out at sea less and less and as older fishermen begin to hang up their nets it falls to the next generation to take the mantel. But encouraging young people to go into fishing is getting harder. Danny Phillips, a 52-year-old fisherman from Cadgwith who voted Leave, works with his 22-year-old son Tommy.  “It’s really nice, it’s as it should be,” says Phillips. “Lots of fishermen wish their sons would follow on but the grass is greener.” But a serious rugby injury sustained by Tommy means this partnership may not last much longer and Phillips is worried he won’t be able to find a replacement. “The youngsters aren’t really wanting to get into fishing,” he says. “They need to know that there’s a future and they can’t see it right now.”

James Roberts, a 26-year-old Newlyn fisherman and vociferous Brexiteer who helped organise the flotilla, agrees. “Not many young guys are working in fishing now,” he says. “There are not many coming into it because it feels like there’s not much to fight for.” Roberts hopes Brexit will turn this flailing domestic industry into a profitable economy but the path to a bright future looks increasingly fraught. “Our government concerns me,” he says. “I’m worried promises made to fishermen potentially won’t be fulfilled.”