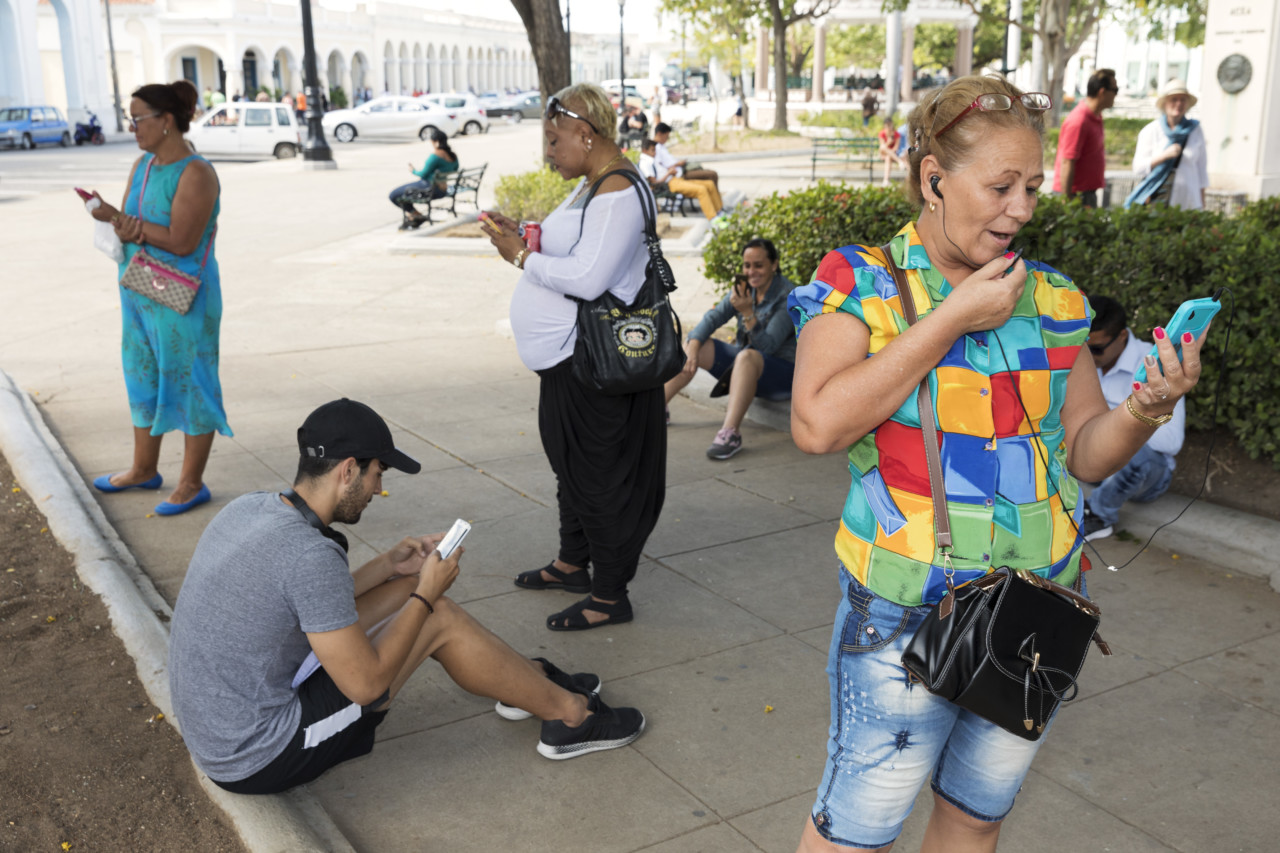 Illustrated with photographs by Martin Parr, his wife Susie pens this reflection on their recent trip to Cuba, where, in addition to the booming tourism industry, the country’s biggest changes are coming from a newfound connectivity to the internet. Previously notoriously slow, improvements have been made to the state-owned internet provision in controlled cafes, and since 2015, the Cuban government has opened public wifi spots in 35 locations, which are instantly recognizable from crowds of people.

Sunday, late afternoon in the city of Camaguay, central Cuba. As the dense heat starts to lift, families pile into horse-drawn taxis, squeezing six a side along the narrow wooden seats. Flicked by the whip, the bony steeds struggle into a trot, turning left onto the main road, dodging Russian-made motorcycles, Ladas roaring along in clouds of black smoke, and the massive Yutong lorries that constantly thunder along the straight, rough road to Santiago. They take a right into a street lined with ramshackle houses, finally coming to a halt at a park called El Lago de Sus Suenos (The Lake of Your Dreams). There is a lake here, where egrets stalk and the evening’s first mosquitoes rise from the swampy mud, but a sign warns that the water is contaminated and swimming is therefore forbidden. 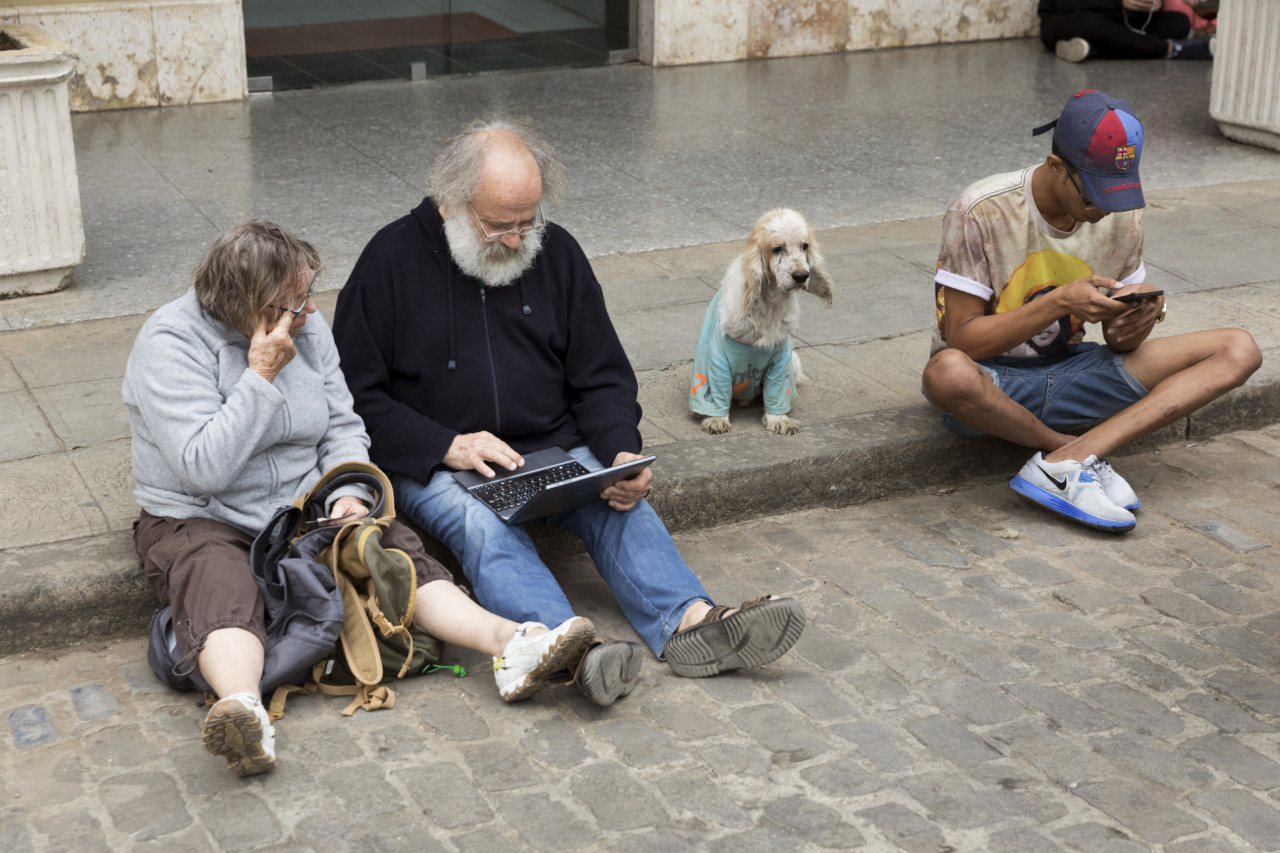 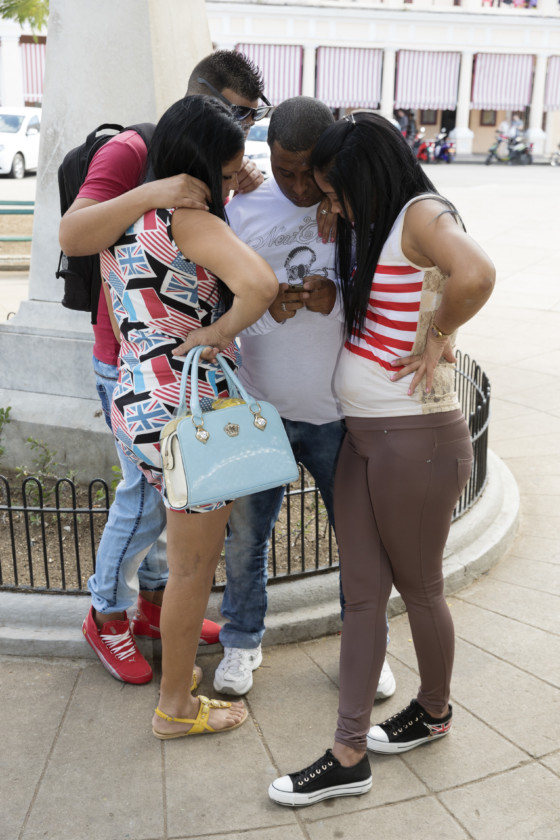 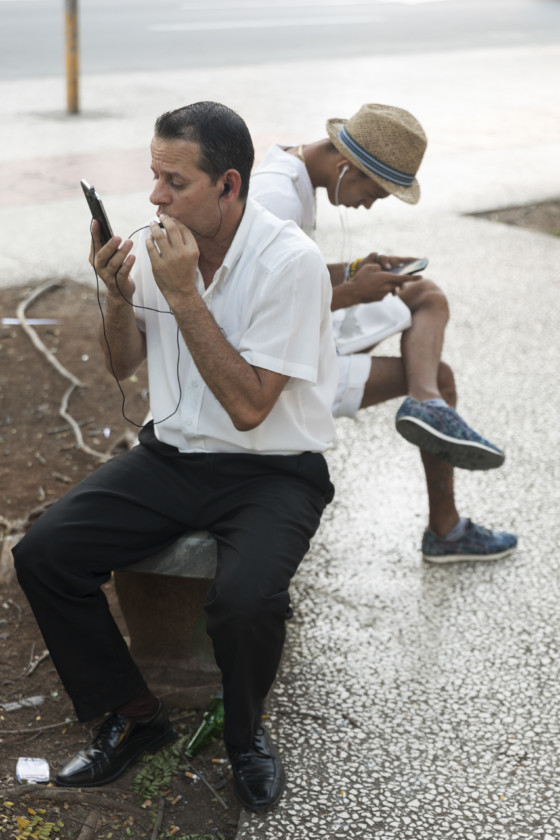 At the gate, a few pesos are exchanged for a paper ticket, ceremoniously torn to mark your entrance.  You can wander along the network of paths, lined with concrete benches, past bars and snack outlets towards the park’s central feature: an elderly Cubana jet, its nose lifted, forever stilled at the point of take off.

Families crowd into the pizzeria or take in the air, strolling and chatting while the children play and scramble. Young men, clutching cans of Cristal, eye the girls, but their admiring glances and raucous comments can go unnoticed: most of the young are intent on their mobile phones. Using IMO – the Cuban version of Skype or Facetime – they talk at top volume, beaming at the fuzzy image of an aunt or grandma in America or a cousin in Madrid, the person who may have sent them the cell phone in the first place, or given them the money to buy one. Boyfriends are introduced, new babies admired, gossip updated while the old – and unconnected – look on in bemusement, having to make do with the lake and the jet for entertainment.

"All over Cuba, in selected parks and on designated street corners, in every city and reasonably sized town, the same scene will be playing out" 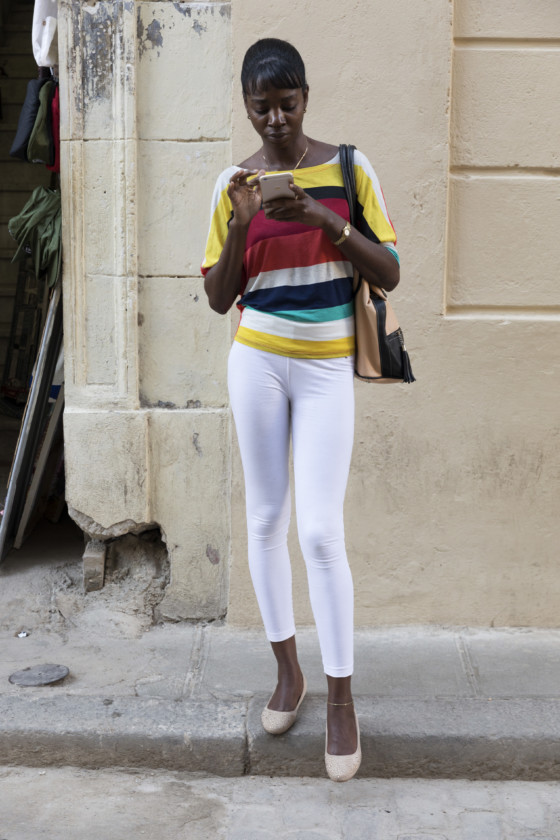 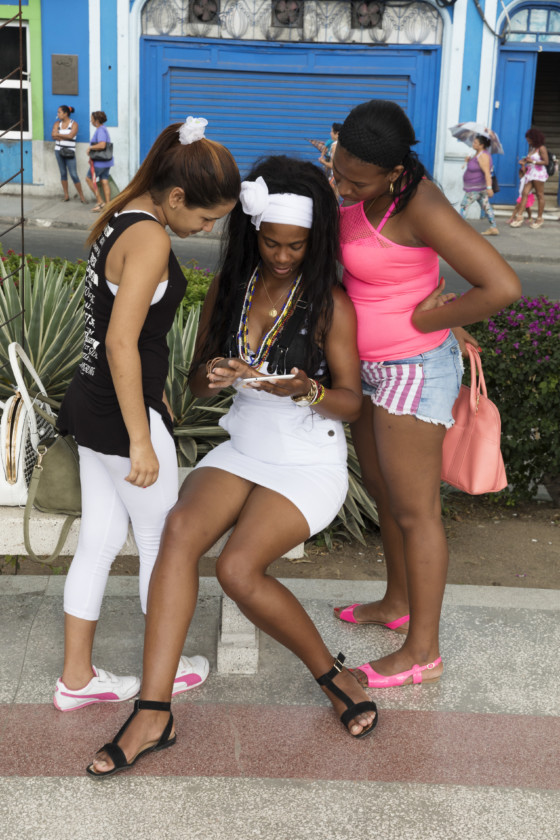 All over Cuba, in selected parks and on designated street corners, in every city and reasonably sized town, the same scene will be playing out. These are the ‘zonas de wifi’, where Cubans can get online. As yet, internet access in private houses is unheard of, and – besides – few people own a computer.

Getting online is not an easy process. First, you must purchase an ETESCA card, which will give you a username and password, then find a wifi zone. Once you pick up the signal, you negotiate the on-screen access form, filling in a long strings of numbers. The wifi signal is erratic, dramatically strengthening and fading minute by minute. ‘Conectar’ (to connect) is expensive. Cards give one hour of access cost 2 CUCs (roughly £2), approximately two thirds of the average weekly wage. Cubans are generally parsimonious with their minutes, quickly checking their Facebook page and keeping conversations brief. Few take the time to surf. Email can be managed through the phone network, which is cheaper and therefore less pressurized. 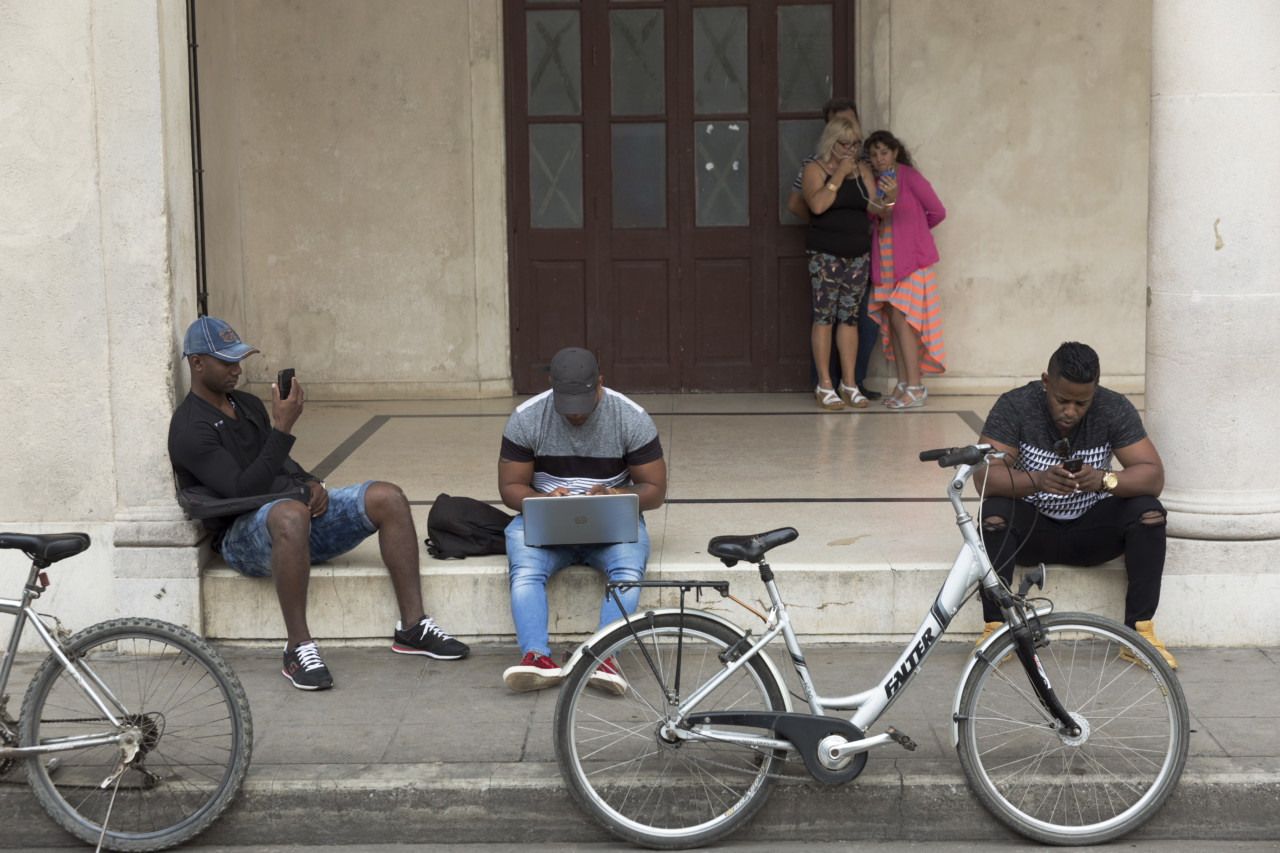 And the equipment essential for getting online will cost you dear. Alcatel, Blu, and Prime handsets sell for upwards of 120 CUCs – ten months’ wages – while the latest Samsung smartphone will set you back at least 200. iPhones are rare, regarded as the Porsche of the phone world. And phones are hard to come by. Cuba’s modest shop fronts display life’s necessities: soap, plastic goods, baby clothes, deodorants, bottles of shampoo. Food shops sell the basics, which are rationed. In such a context, glossy emporia showcasing the latest cellphone models are unthinkable. Those who do sell phones usually have only a few hidden away in a drawer or in a briefcase under the desk. One salesman outlined the circuitous route of acquisition: friends and relatives from the Cuban diaspora send the phones from abroad and these are either sold on second hand, or distributed amongst the extended family. 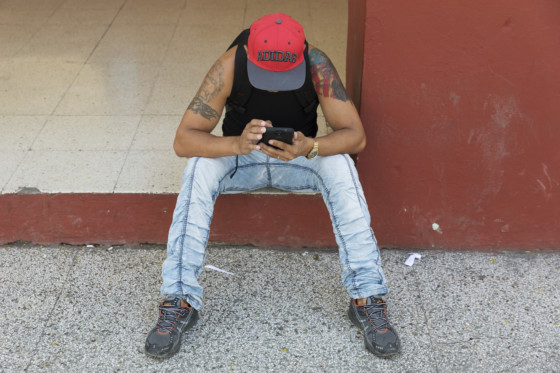 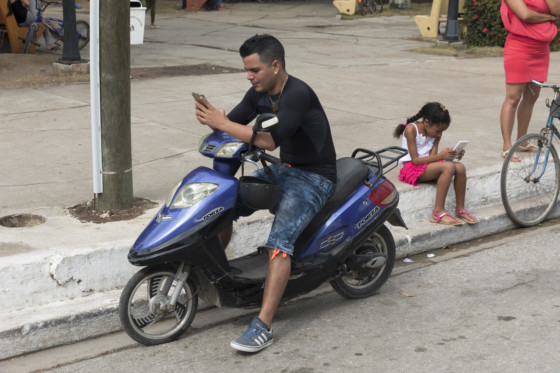 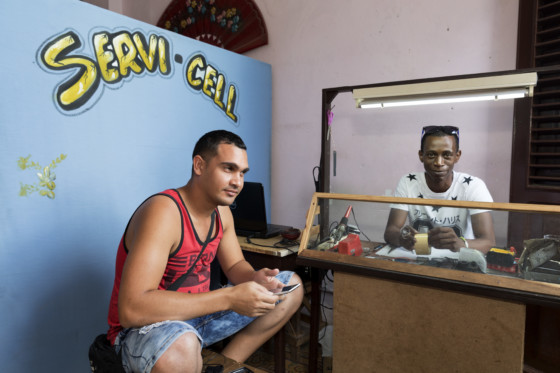 Despite all these difficulties, the internet revolution is taking hold in Cuba. It is estimated that around 25% of the Cuban population (mostly the young) own a mobile phone, and this number is steadily rising. Raoul Castro is slowly loosening the grip of the state, for example allowing private restaurants to set up in competition with the grim, government controlled eateries that  predominated for decades. The internet is an essential infrastructural resource for business and for tourism- Cuba’s second most important industry. But many question the pace of progress. Why, in a country that has such excellent health care and education, does access continue to be so expensive, so difficult, and so limited?

As darkness falls in Havana, phone screens cast a gentle light onto the faces of the Cuban conectados, standing alongside tourists outside the Ambos Mundos bar. Cubans are gazing into a brave new world in which information, acquisition and dissent are open to everyone.