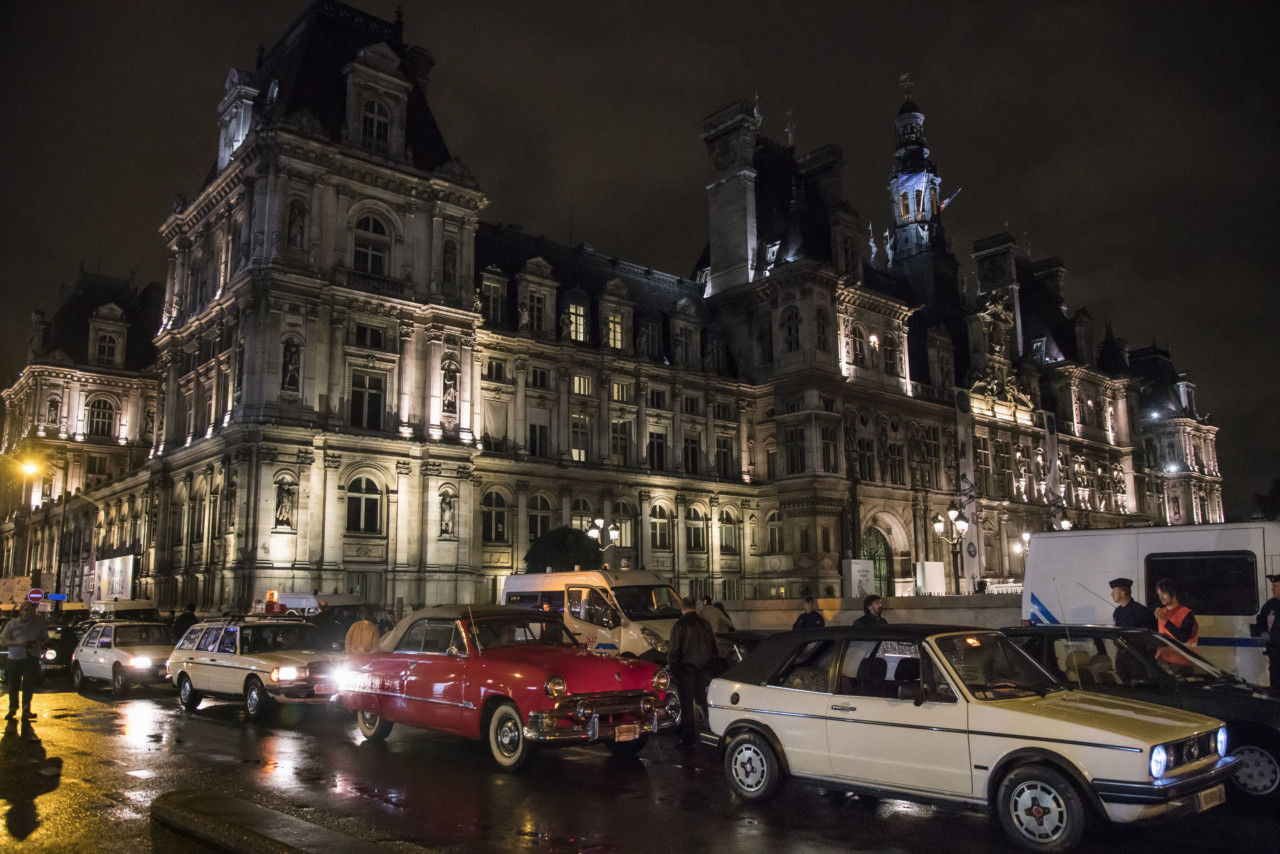 Richard Kalvar A demonstration of motorcyclists and motorists protesting the new law passes in front of City Hall (Hôtel de Ville). Cars and commercial vehicles on the road since before 1997, and motorcycles and (...)
scooters first sold before June 1999, are no longer allowed to circulate in Paris, Monday through Friday between 8am and 8pm. The ecological benefits of these changes are questionable, while the economic and pleasure costs are considerable. Paris, France. 2016 © Richard Kalvar | Magnum Photos
License |

In a bid to clean up the city’s air, pre-1997 cars and utility vehicles (and pre-1999 motorbikes) have been banned from Parisian streets during working hours.

The Mayor of Paris, Anne Hidalgo, argued that pollution levels are so high in Paris that, at peak times, they are equivalent to breathing in the smoke of eight cigarettes burning in a 20 square meter room. Air pollution in Paris is indeed a concern: in particular fine particle fuel emissions. Estimates from France’s public health agency show a yearly toll of up to 48,000 deaths caused by pollution in France (while in Europe the figure is about 400,000, rising to 3.7 million worldwide).

But the decision is a highly controversial one, with Parisians taking to the streets to demonstrate against the ban. Some feel it is an ineffective decision which raises discrimination issues: indeed, those who can least afford to replace their cars are the hardest hit, while those granted collectors’ cars status are issued a special permission to stay on the road. 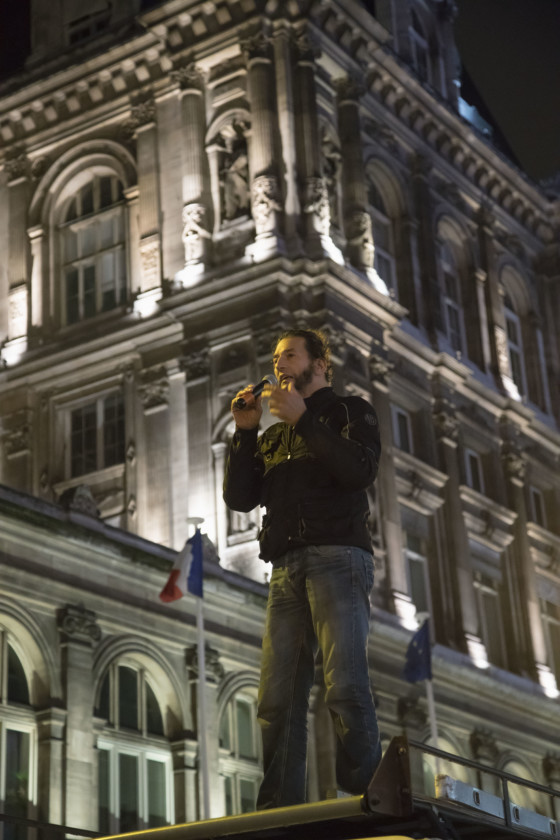 Richard Kalvar Montreuil residents Roland and his girlfriend Reseda wait for the start of the demo in their old Fiat. They attended a demonstration of motorists and motorcyclists protesting the new law gathers at (...)
the Bastille before going on a ride through the city. Paris, France. 2016. © Richard Kalvar | Magnum Photos
License | 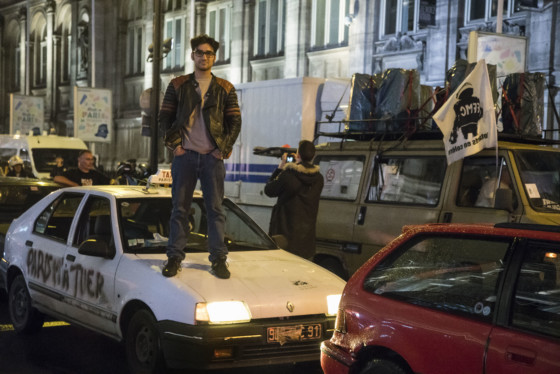 Richard Kalvar Alexandre, a student, standing on the hood of his 1992 Renault, formerly a taxi, doesn't have the means to buy a new car. He was attending a demonstration of motorists and motorcyclists protesting (...)
the new laws in front of City Hall (Hôtel de Ville). 2016 © Richard Kalvar | Magnum Photos
License |

Jean-Marc Belloti, a motorcyclist who coordinates an activists’ association against the ban (Fédération des Motards en Colère pour Paris et la Petite Couronne) owns 20 motorbikes, of which 18 are pre-June 1999. He says, “We are sending a very simple message to the poor: stay at home in your suburbs! If you have a new vehicle, you can come into Paris. If not, stay at home or take the metro…” He continues by pointing out that public transport in Paris is not only extremely crowded, but also circulates highly polluted air, reputedly containing up to five times the allowed fine particle level.

The ban took effect on July 1, 2016, but so far no penalties have been issued to the cars infringing the ruling. However, this is about to change: from 1st October, fines will be dispensed to those continuing to drive their older cars on Parisian streets from Monday to Friday, 8am to 8pm. Outside of those hours, these same cars are permitted back into the capital, but this saving grace is only temporary: the ban will be extended by 2020. 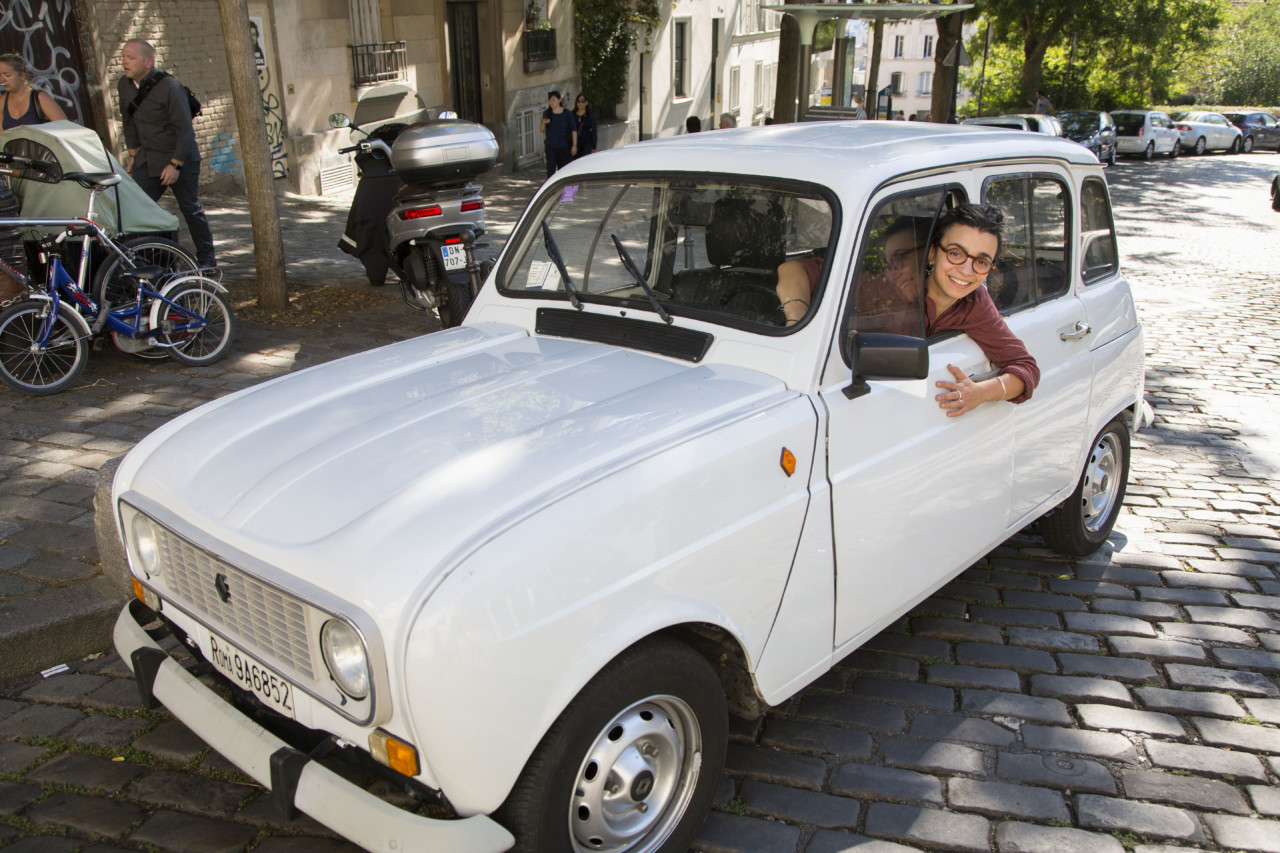 Richard Kalvar An Italian employee of Magnum Photos, Giulietta drives a 1984 Renault 4L running on GPL. She hopes that the less-polluting fuel, and the Italian registration, will allow her to avoid penalties. Pa (...)
ris, France. 2016 © Richard Kalvar | Magnum Photos
License |

Richard Kalvar met some of those most concerned and photographed the “Manif des Bannies”, a demonstration which took place on 16 September 2016. Maitre Iosca, also photographed by Kalvar, is a lawyer leading a group action against the Mairie de Paris, the Parisian local authority, to oppose the ban and to seek compensation for those most hurt by the ruling.

He reports, “Certain people have told me they will have to give up their jobs. Amongst the cases I’m working on, there are plasterers, plumbers, builders… How will they manage without their utility vehicles? They have been told they can continue their professional activity but must purchase an electric vehicle. In order to avoid being hit by similar restrictions coming into effect in one, two or three years, very expensive measures must be taken now!”

In effect, the new law applies to vehicles older than 20 years, of which there are a limited number. But it’s scheduled to be gradually tightened, so that by 2020 it will apply to vehicles a mere 10 years old. That will affect many more people. “What we see here is a preview of an issue that will soon become much bigger; it’s not spectacular yet, but probably will be a little ways down the road”, says Richard Kalvar. 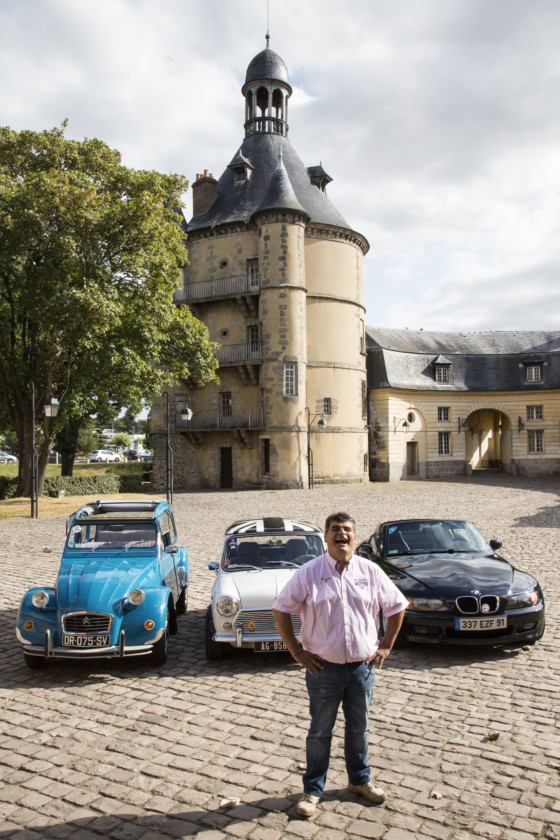 Richard Kalvar Karl Grégoire owns and repairs 3 cars first sold before 1997: a BMW Z3, a Mini, and a 2CV (Deux Chevaux). He lives in Sainte Geneviève des Bois, a town 30km south of Paris, and has difficulty accep (...)
ting that he is no longer allowed to drive in Paris whenever he wants. Paris, France. 2016. © Richard Kalvar | Magnum Photos
License |

Others are very attached to their cars, such as Magnum Photos employee Giulietta, who drives a Renault 4 from 1984 that she bought before she even had her driver’s license, and has spent considerable amounts restoring. For her, replacing her car is unthinkable.

There is a whole industry that depends on the older car market. For example, Milan Kapacee is the director of an agency that organises tourist tours of Paris in the famous and well-loved “Dodoche”, the Citroën 2CV, which is over 25 years old. An obvious solution would be to convert the cars with electric engines, but it’s a costly exercise that would remove the vintage charm of the vehicle in the first place, with its roaring engine and stiff manual gears.

Hatem Zatouri is the proprietor of a small garage that specializes in the repair of older Minis. He is acerbic on the subject: “Once again the politicians have only thought of themselves and haven’t thought about the collateral damages of their decision-making.” Richard Kalvar Owner of a Mini garage in Ivry, just outside of Paris, Hatem Zemouri specialises in repairing old Austin Minis. Since many of his clients will be forced to sell their cars because of the new law, h (...)
e’s worried that he will be obliged to close his business. 2016 © Richard Kalvar | Magnum Photos
License | 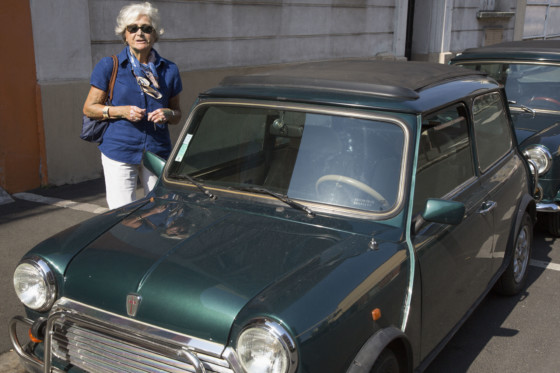