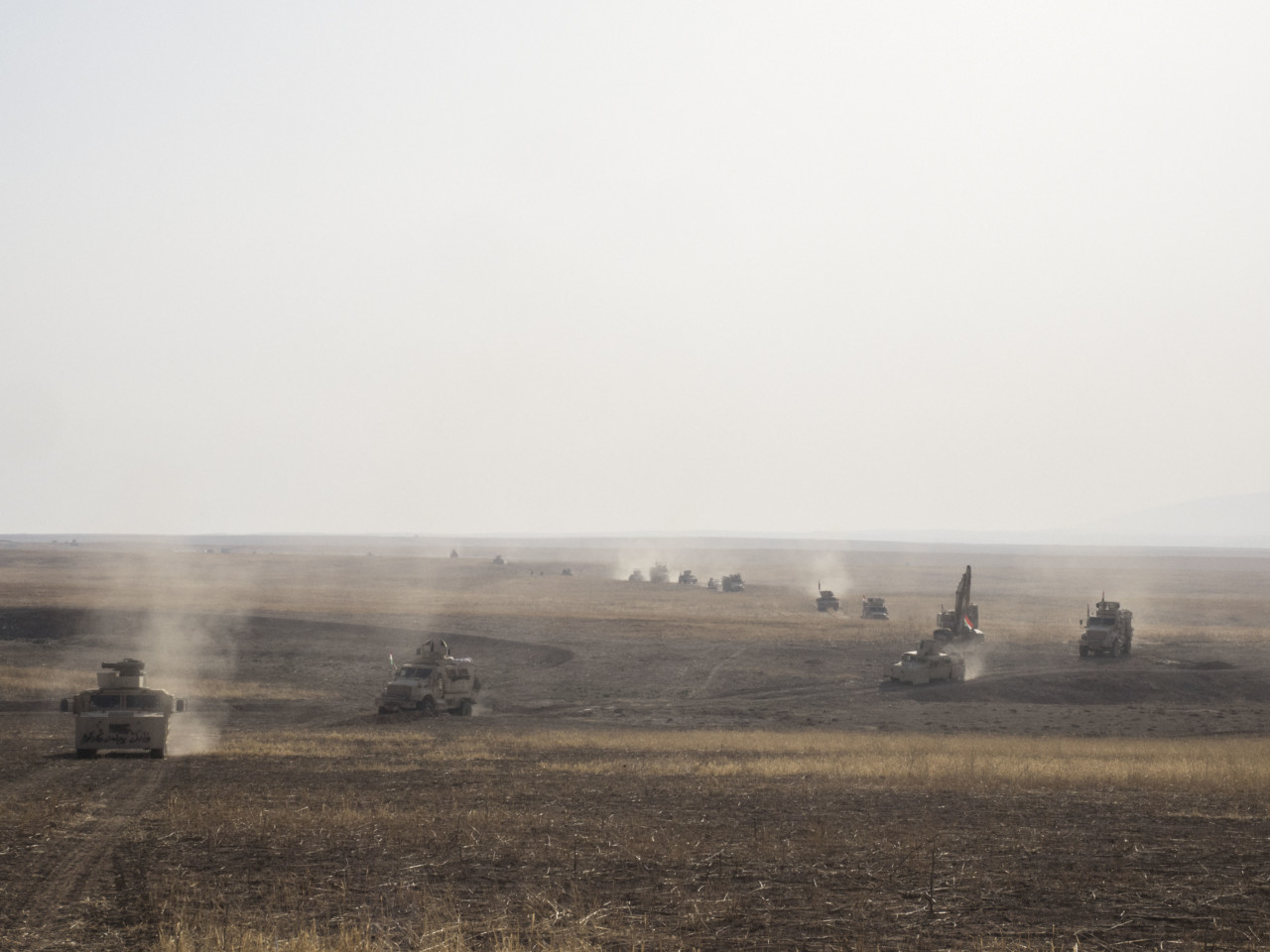 Magnum photographer Jerome Sessini has documented the ongoing conflict in Iraq since 2003. His award-winning work has been published in magazines and newspapers worldwide. In 2016, he returned to Iraq and focused on Mosul, a city in Northern Iraq occupied by ISIS since 2014. This year it has been the site of a raging battle for control of the city between ISIS and the Coalition forces. Sessini was on the ground documenting the advance into the city. Here, we present his most recent work and a perspective on the conflict, in his words. 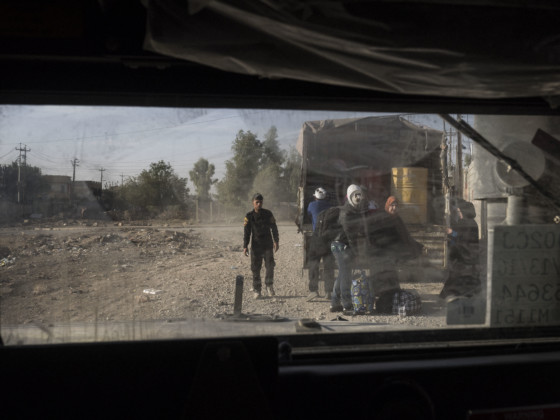 Jérôme Sessini Civilians, some of them wounded, fleeing combat between ISIS and the Iraqi army in the Zahaar district, east Mosul, are seen from inside an Iraqi army armored vehicle. Mosul, Iraq. 2016. © Jérôme Sessini | Magnum Photos

Iraq has mostly been unstable and in a state of conflict ever since the US declared war in 2003. How long have you been photographing Iraq and how has it changed over time?

My first trip in Iraq was in March-April 2003, during the US invasion, and I’ve made about ten trips since, between 2003 and 2008. After President Bush claimed ‘Victory’ on Saddam Hussein, things have got worse. The biggest mistake the Americans made was to dismiss the Iraqi army and the Ba’athist officers from the construction of a new Iraq to the benefit of the Shiite political and military forces. This is how the former Ba’athist officers began the resistance against the American forces in Iraq, and against the Shiites supported by the Americans. A long period of inter-religious violence and bloody attacks began in 2004 and continues today. This is also the reason of the genesis of ISIS. 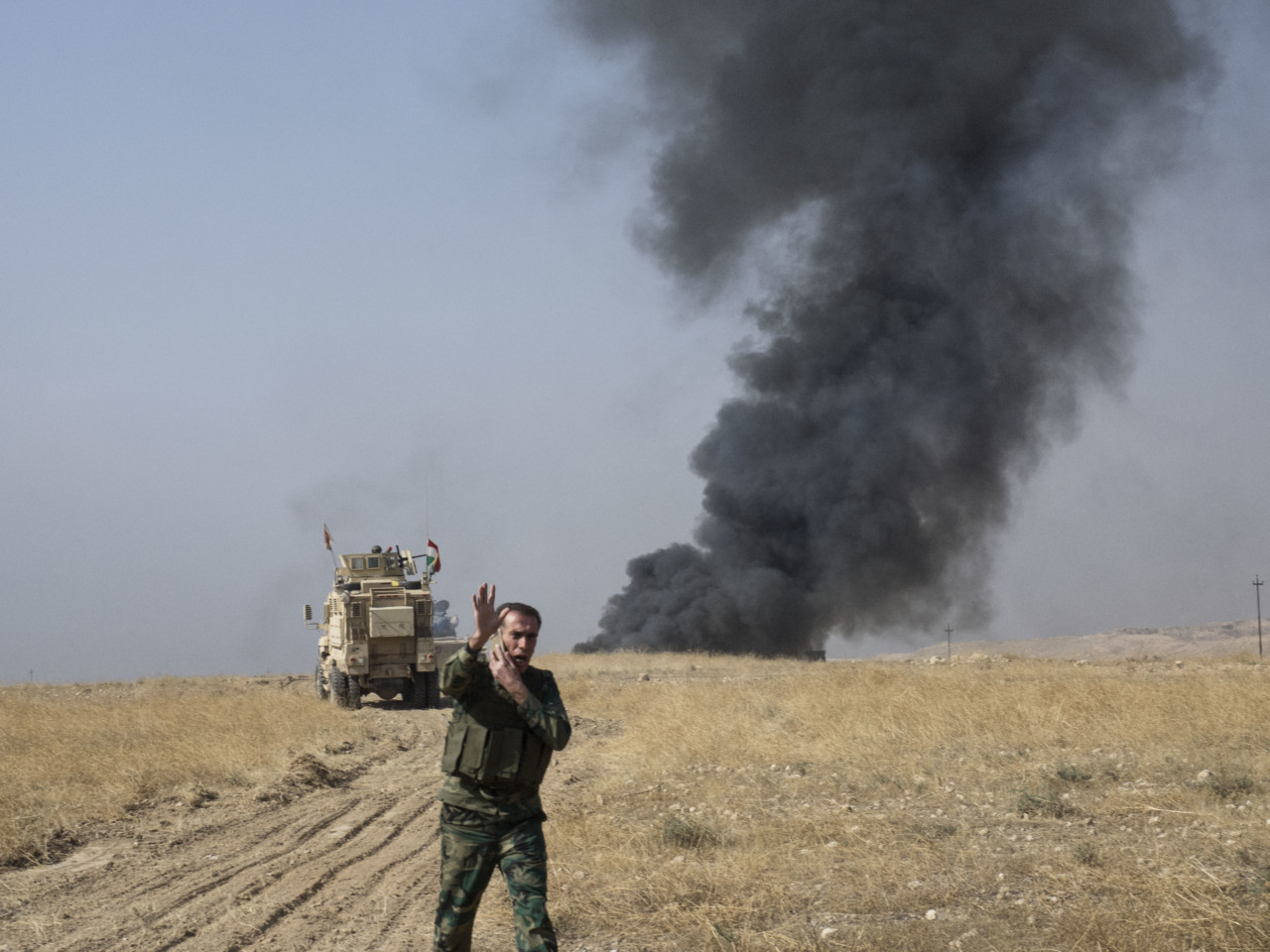 Jérôme Sessini A peshmerga officer stops the convoy as a bus packed with explosives by ISIS explodes on the way to Bashiqa. The explosion was intended to stop the advance of peshmerga forces in their offensive fr (...)
om two fronts near Bashiqa, north east of Mosul. Bashiqa, Iraq. November 7, 2016. © Jérôme Sessini | Magnum Photos

Mosul has been under the control of ISIS since 2014. In your images you show the taking of the small town of Bashiqa (in north-eastern Mosul) by Peshmerga forces, part of the push to retake the area. Can you describe the moment the town fell, and what it was like to penetrate areas that had only just recently been under the control of ISIS fighters, where they slept and ate as well as fought?

ISIS had two years to prepare for this battle, digging networks of tunnels, using kamikaze car-bombs and IEDs, which allow them to surprise the assailants. The battle for Mosul will be long and extremely deadly, both for soldiers and for civilians. 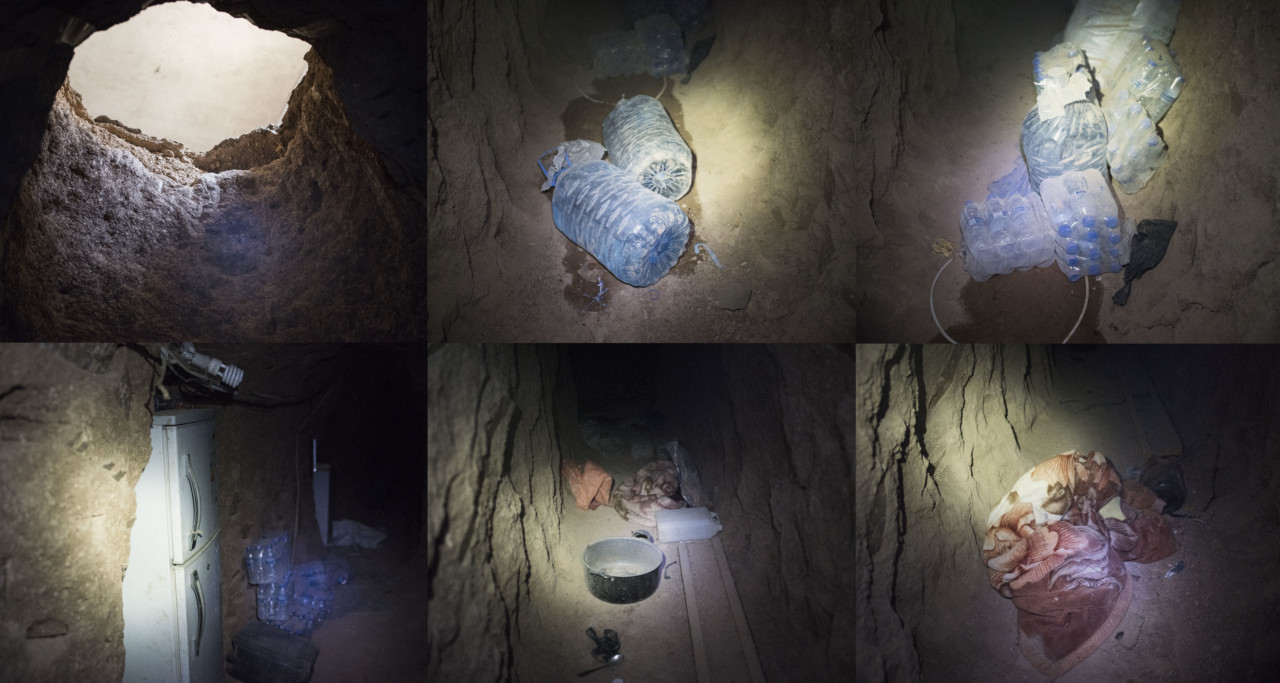 I entered Bashiqa on foot, taking cover behind the armored vehicles of Peshmerga forces. The town was empty, a ghost town. All the civilians had fled, and the Coalition bombing had destroyed most of the buildings. As soon as we entered the city, snipers opened fire on our column. The commander of the first tank was killed, shot dead by a sniper.

I noticed that the Peshmergas were courageous but not very organized. I was surprised that the Daech fighters who were hidden in the city did not organize a counterattack, which would have been fatal for the Kurdish forces stuck in the narrow lanes with the tanks.

After the death of the tank commander, the fighters started to panic, and most of the forces left the city. Immediately afterwards, the Kurdish media announced the release of Bashiqa, while Daech’s soldiers were still inside the city, ambushed in the ruins or tunnels. 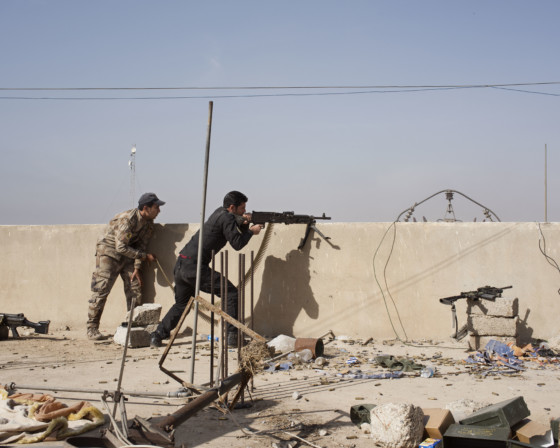 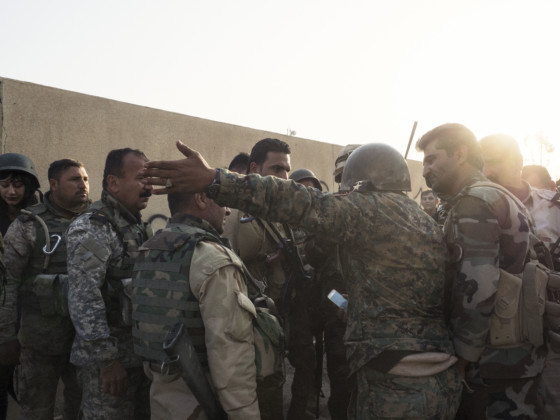 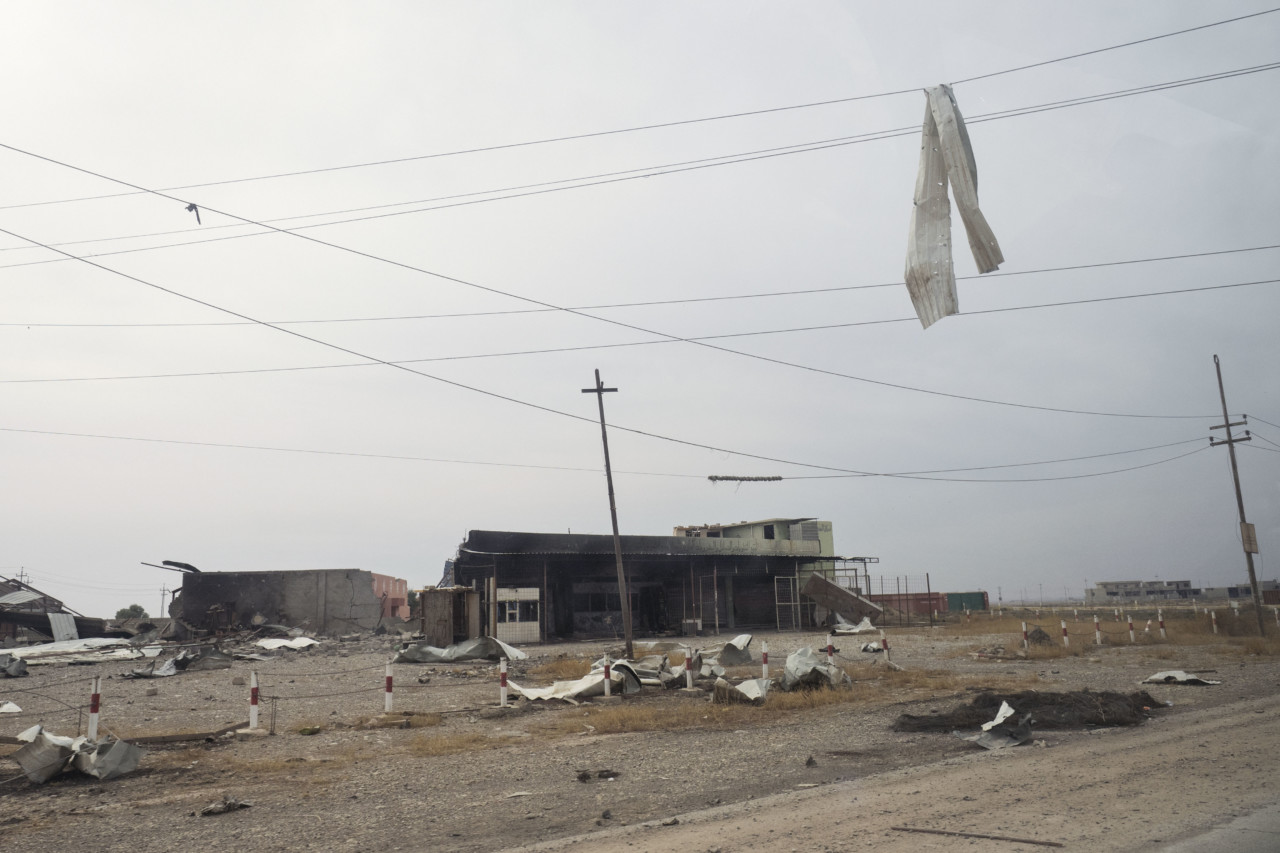 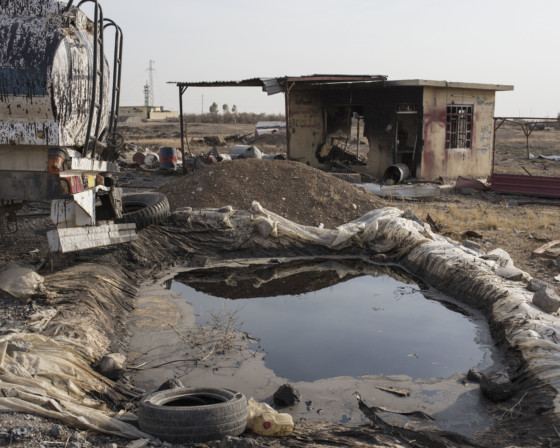 The Iraqi have and are suffering greatly from this conflict. In your images we see people fleeing from their demolished homes, sometimes wounded. Where are they going?

Iraqi forces established a base camp in the eastern neighbourhood of Godjali. In a makeshift open-air hospital lie numerous injured civilians receiving treatment for mortar rounds or car-bombs. Most arrived from the Zahra neighbourhood, where Iraqi forces have difficulty fighting ISIS because of the massive presence of civilians.

ISIS does not hesitate to use civilians as human shields, preventing the Coalition forces’ airplanes from bombing the neighbourhoods. 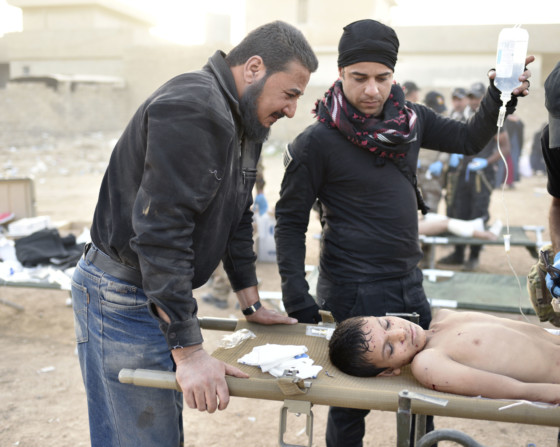 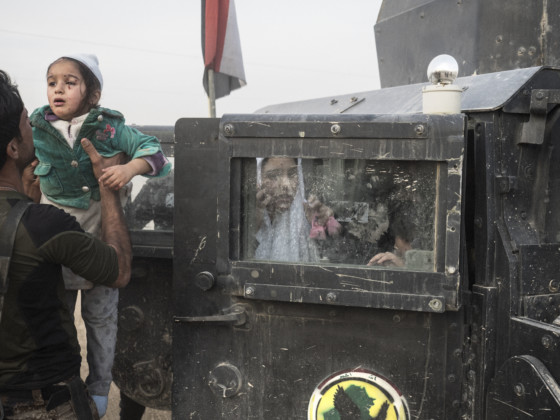 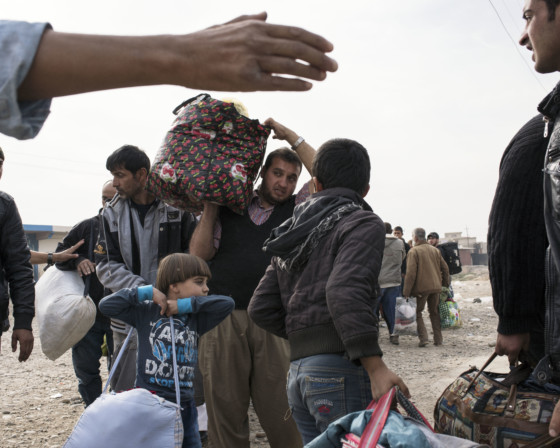 Jérôme Sessini Civilians who fled the fights in Mosul are waiting to be counted and interviewed by Iraqi forces. Women and men are separated. The Iraqi Security Forces (ISF) are moving deeper into Mosul’s eastern (...)
neighborhoods. Mosul, Iraq. November 10, 2016. © Jérôme Sessini | Magnum Photos 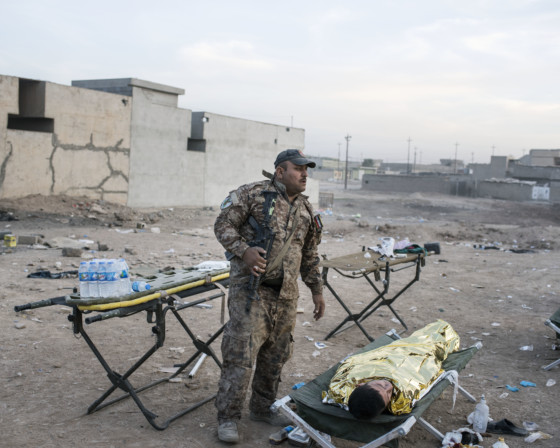 Civilians take advantage of the lulls in fighting to leave their homes. Some of the families who managed to escape by foot are gathered in houses in Godjali. Then, the men and women are separated and carried by trucks to refugee camps near Erbil.

The Iraqi army has ordered the civilians to show a white flag, otherwise they may be shot by Iraqi soldiers who fear the kamikaze attacks of Daech fighters infiltrated among civilians. Jérôme Sessini Civilians are fleeing from their neighborhood because of the fights between Iraqi forces and ISIS. Mosul, Iraq. November 13, 2016. © Jérôme Sessini | Magnum Photos 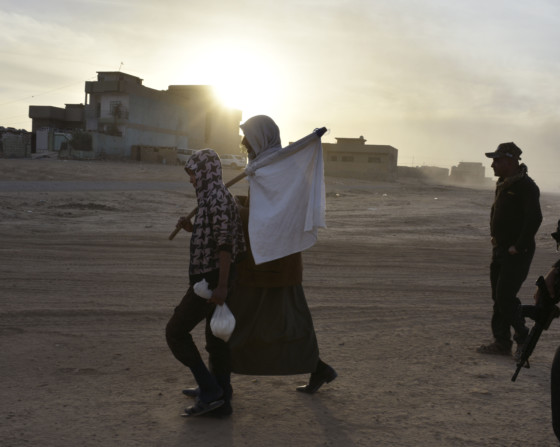 Jérôme Sessini Civilians flee from their neighborhood because of the fights between Iraqi forces and ISIS. Mosul, Iraq. November 12, 2016. © Jérôme Sessini | Magnum Photos