Paolo Pellegrin is known today as one of the world’s leading photojournalists and conflict photographers. The winner of ten World Press Photo awards and the Robert Capa Gold Medal (among many others), he has been a full member of Magnum since 2005.

Pellegrin’s work is often defined as concerned journalism.  His subjects are diverse, including urban poverty, disease, natural or environmental disaster and conflict of the most hateful nature in every corner of the world.  But all his stories are defined by an urgent imperative to bear witness to suffering and resilience.

The books which Pellegrin has published in the course of his career offer numerous examples of this point. Double Blind, the product of a period spent in Lebanon in 2006 on assignment for Newsweek and The New York Times, dwells on the suffering of the Lebanese who were exposed to daily air strikes from which they could not hide. Pellegrin’s coverage of the Kosovo conflict, as featured in his book Kosovo, 1999‐2000 The Flight of Reason, emphasises the displacement, confusion, and misery of people at the mercy of forces beyond their control.  Other books, such as As I was Dying (2008) or Dies Irae (2011) present a broader range of subjects but are united by Pellegrin’s imperative to bear witness for the benefit of present and future generations.

Pellegrin has had many solo exhibitions during his long career, which commenced in 1987.  His latest, Un’antologia (An Anthology), is now on display at MAXXI, Italy’s first national museum of contemporary art and architecture, located in Pellegrin’s home city of Rome. MAXXI, which opened in 2009, is an experimental space designed by the late Zaha Hadid, one of the most important and innovative architects of her generation.  By their very nature, the museum’s galleries compel artists and curators to innovate when presenting exhibitions of contemporary art and photography.

It is therefore not surprising that this exhibition, two years in the planning, represents an entirely new departure for Pellegrin.  At its core is Pellegrin’s reportage photography, drawn from his personal archive and featuring work created throughout his career from the early 1990s to the present day. However, this is not a conventional retrospective. 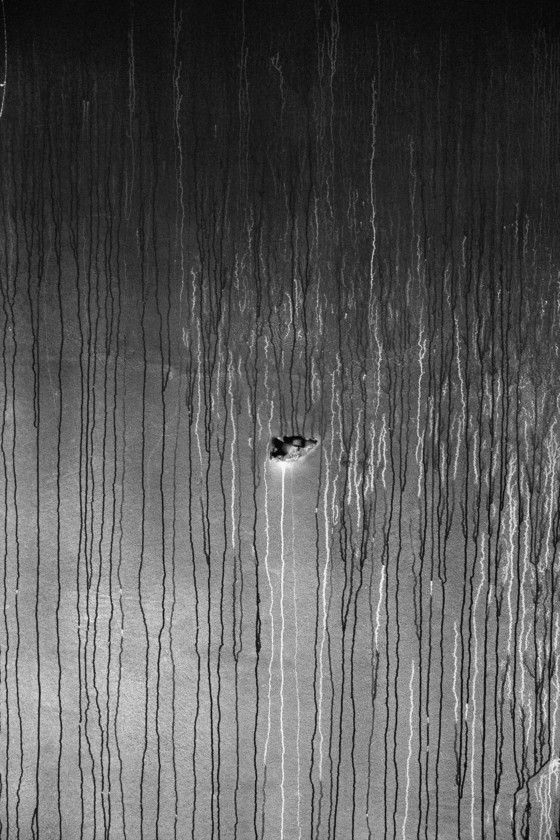 "The exhibition is a meditation on the impact, consequences and legacy of suffering, as witnessed by Pellegrin" 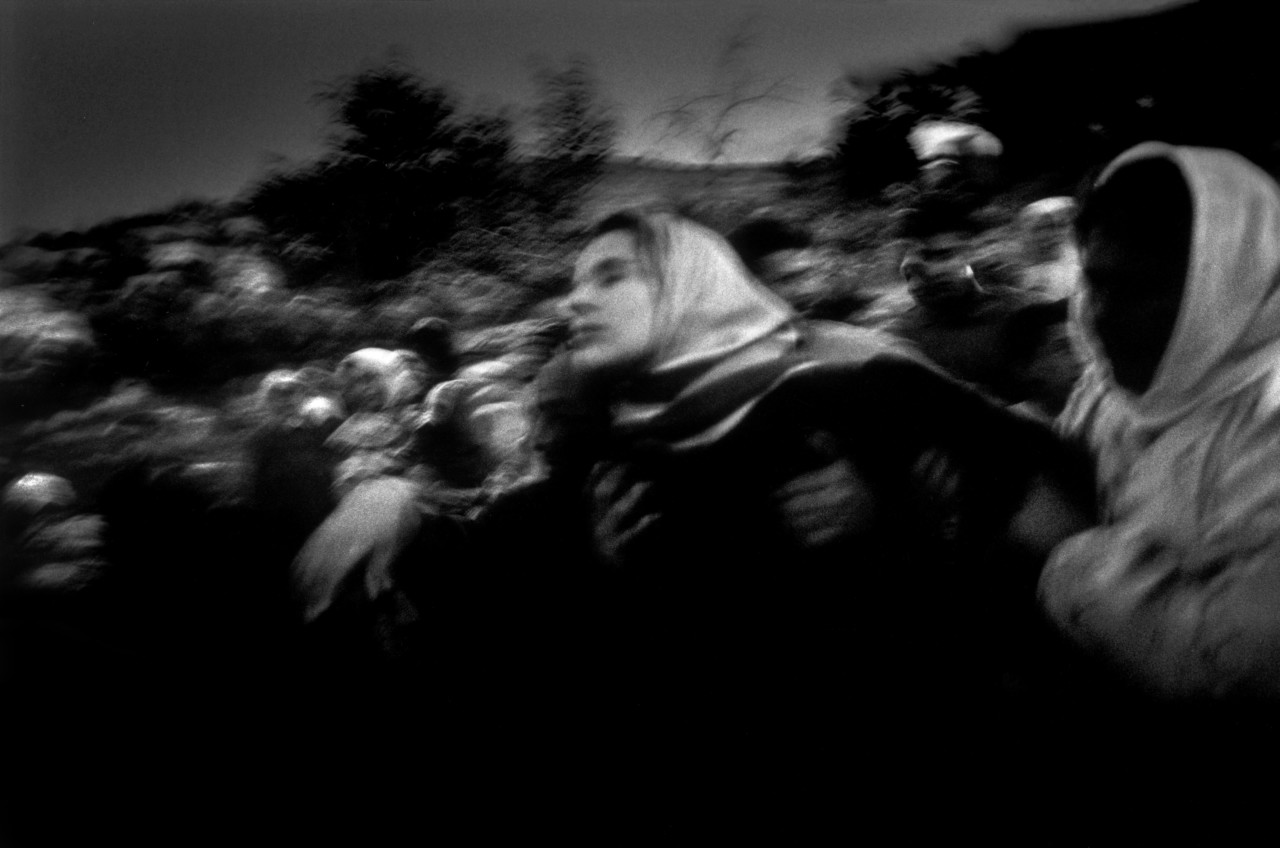 Curated by Germano Celant, a celebrated art historian who serves as Artistic Director of the Prada Foundation in Milan, the exhibition is a meditation on the impact, consequences and legacy of suffering, as witnessed by Pellegrin, and an exploration of his artistic vision.  The combination surprises, challenges and fascinates in turn.

More than 150 analogue and digital prints, some vintage, some unpublished, are displayed in the exhibition accompanied by the bare minimum of interpretive text.  Instead, the photographs are contextualized by occasional video clips shot by the photographer and a fascinating installation – created in the gallery by Pellegrin himself – which uses notebooks, sketches, prints, negatives, transparencies and printed ephemera to showcase the exhaustive process of visual research which underpins Pellegrin’s working practice.  The interactive nature of the installation entices the visitor to browse and investigate, thereby experiencing something of the way in which Pellegrin works. 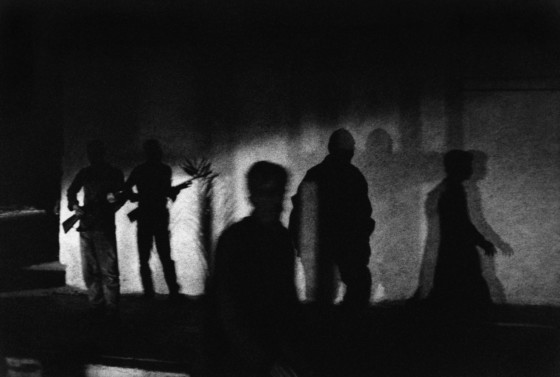 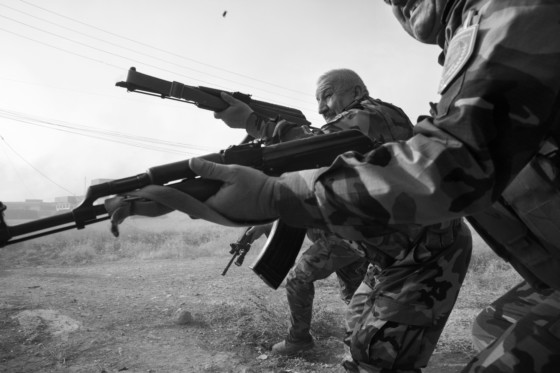 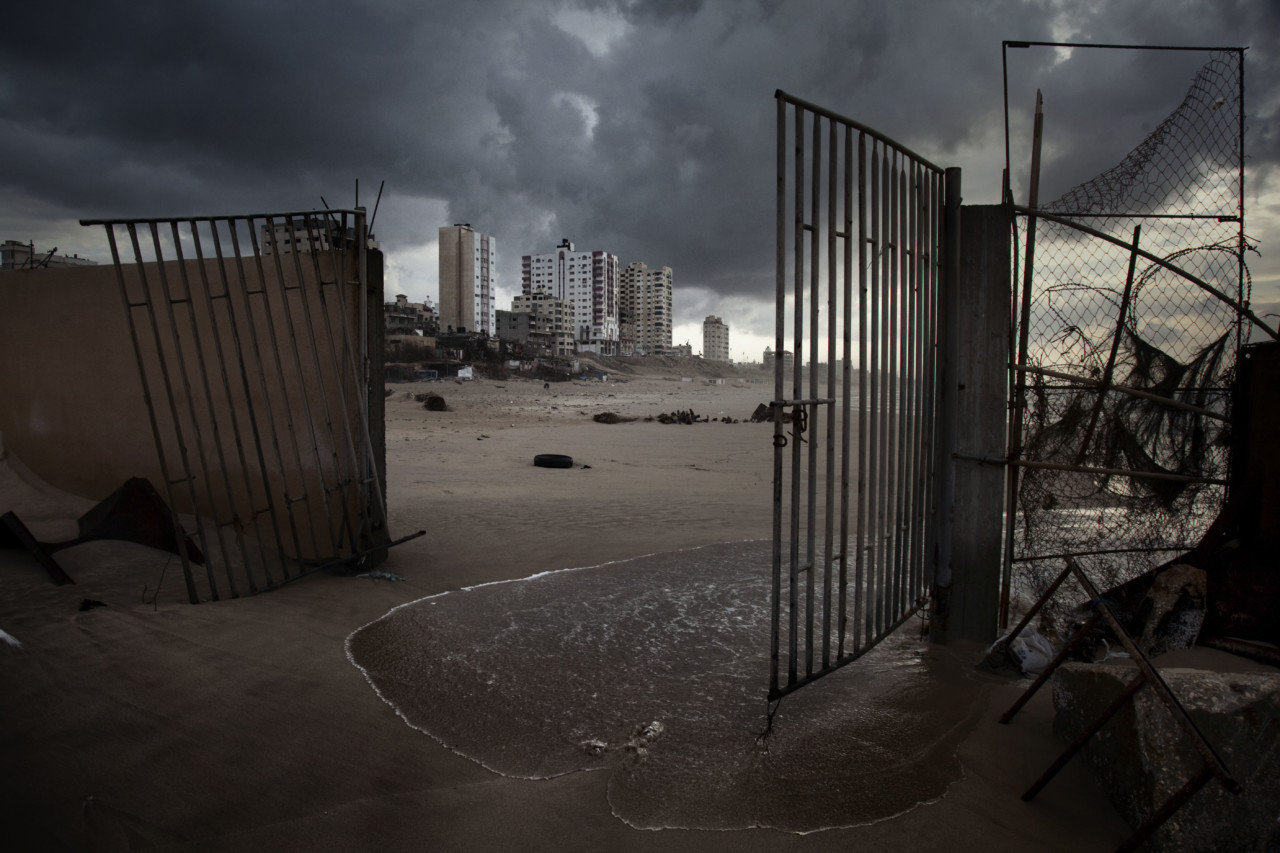 Paolo Pellegrin Gaza City apartment buildings rise beyond the broken gates of a waterfront restaurant. This beach once bustled with fishing boats and cafés, but the Israeli naval blockade, sewage, and lack of reso (...)
urces for rebuilding have taken a toll. Gaza, 2011 © Paolo Pellegrin | Magnum Photos

Pellegrin’s practice is summarized by Celant as: ‘a blend of long ‐term projects and aesthetic sensitivity, honed over years of studying images and vision.’ He adds:

‘The result is a working method that looks back to the idea of slow journalism guided by the intellectual urgency to learn more rather than by a desire to understand an iconic image.  This translates into stories to be read over time, periodic returns to places photographed in the past and a focus not only on the moment of conflict, but on what happens afterwards.’

The exhibition adopts a thematic rather than chronological approach, encouraging visitors to make visual connections within and between by the various installations and groupings – an unusual approach for an exhibition of reportage photography but entirely consistent with that of art photography.  In this, as well as in style and aesthetic, the exhibition invites comparisons with Edward Steichen’s landmark exhibition The Family of Man (1955), currently on long term display at Clervaux in Luxembourg.

Steichen, who photographed two world wars, used his combined experience as a curator, artist and pioneering photographer, to deliver an exhibition which – by showcasing reportage photographs drawn from around the world, offered a message of hope for the future of mankind (then emerging from the trauma of the Second World War) and a warning about the threat posed by nuclear weapons.  Steichen’s thematic and experiential groupings of uncredited and un-captioned photographs forced the viewing public to engage directly with the images themselves, shorn of their usual context. The effectiveness of this approach was such that The Family of Man, which was seen by an estimated nine million people around the world, remains the most popular photographic exhibition of all time.  Pellegrin and Celant adopt a similar approach in Un’antologia (although this is entirely coincidental on their part). 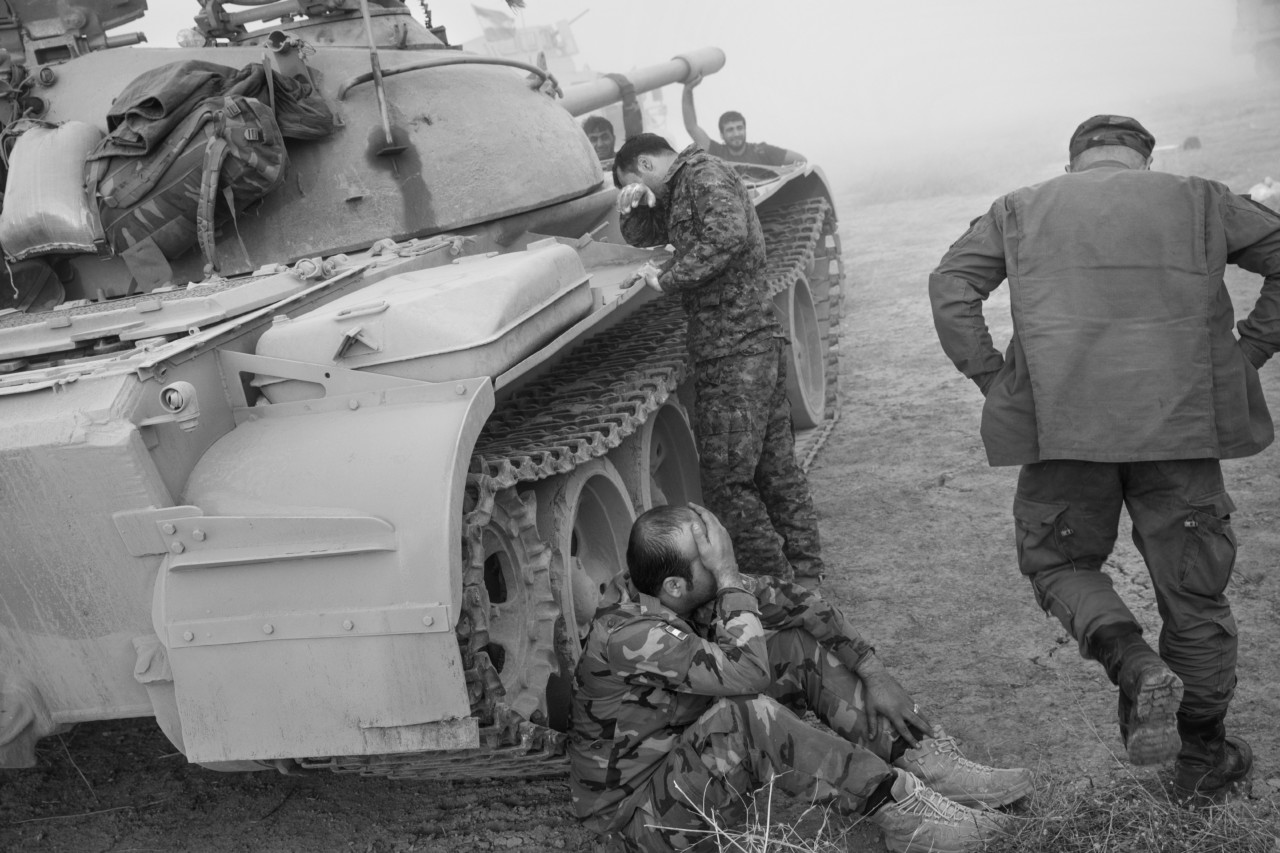 "Un'antologia is a journey from darkness into light, accompanied by elements of horror, despair, chaos, uncertainty, beauty and hope" 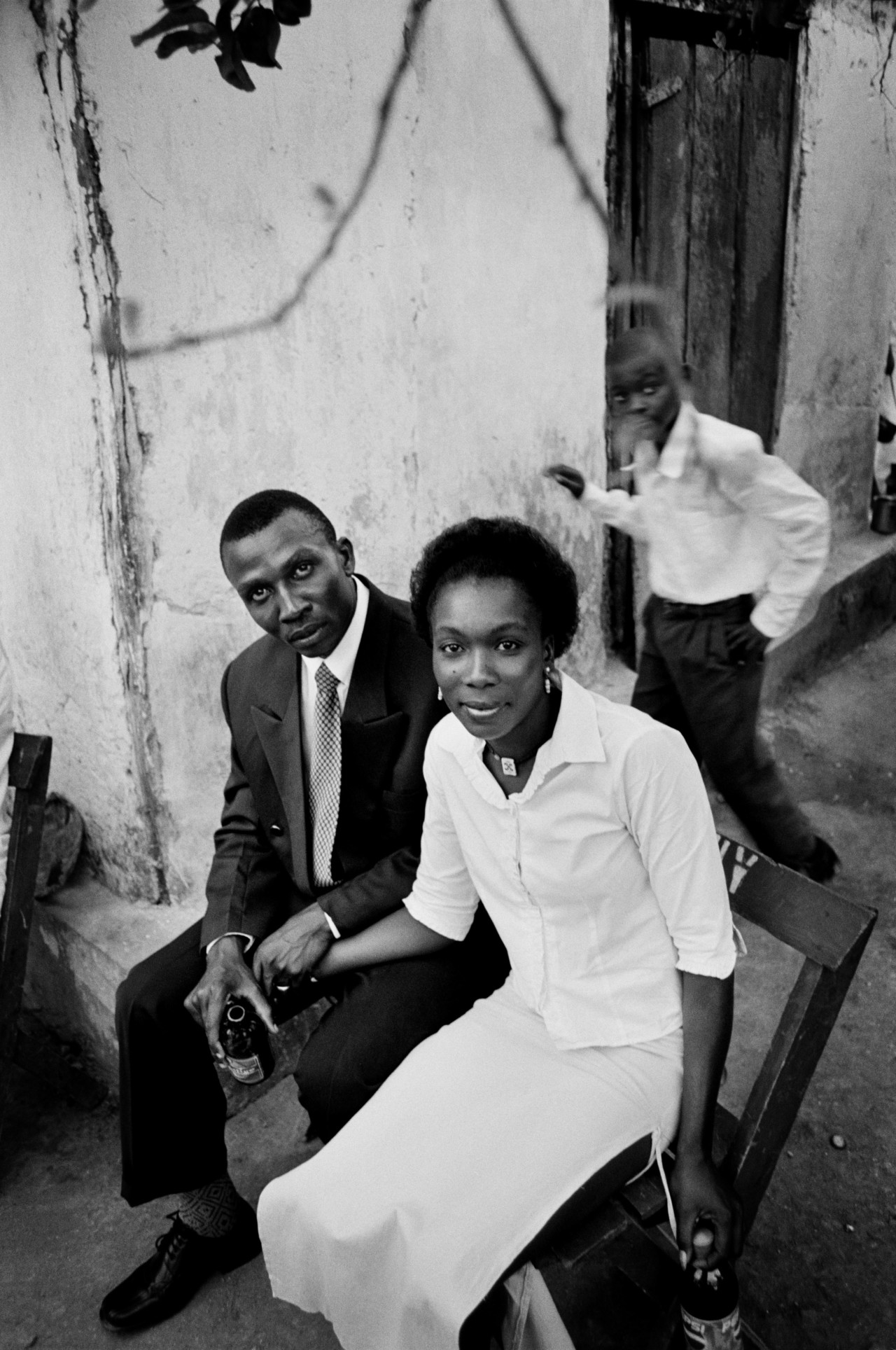 Un’antologia is a journey from darkness into light, accompanied by elements of horror, despair, chaos, uncertainty, beauty and hope.  On first entering the gallery, the visitor is plunged into darkness, surrounded by images of violence, persecution and suffering. It is a disorientating experience, in which all sense of time and place slips away.  In many ways, this evokes Pellegrin’s personal experience as he shuttled between conflict zones.  Three 2015 portraits of captured Islamic State fighters, heads turned away from the camera in the classic pose of passive resistance adopted by prisoners of war, are juxtaposed with a threatening portrait of an enraged activist protesting at Israel’s disengagement from Gaza in 2005.  Nearby is a vast panoramic montage of photographs and videos selected from Pellegrin’s 2016 coverage of fighting for the Iraqi city of Mosul, a deliberate evocation of Guernica, Picasso’s masterpiece of 1937.

After this dramatic beginning, the use of innovative display techniques continues throughout the exhibition. Photographs are combined in grids, mosaics and montages to evoke the human experience of the photographer and his subjects.  A montage of prints taken at the US detention facility at Guantanamo Bay in 2012 is a powerful evocation of the monotony and lack of privacy experienced by detainees. Another set of images, featuring female victims of Boko Haram in Nigeria 2017, conveys their femininity and suffering but also respects their right to anonymity. 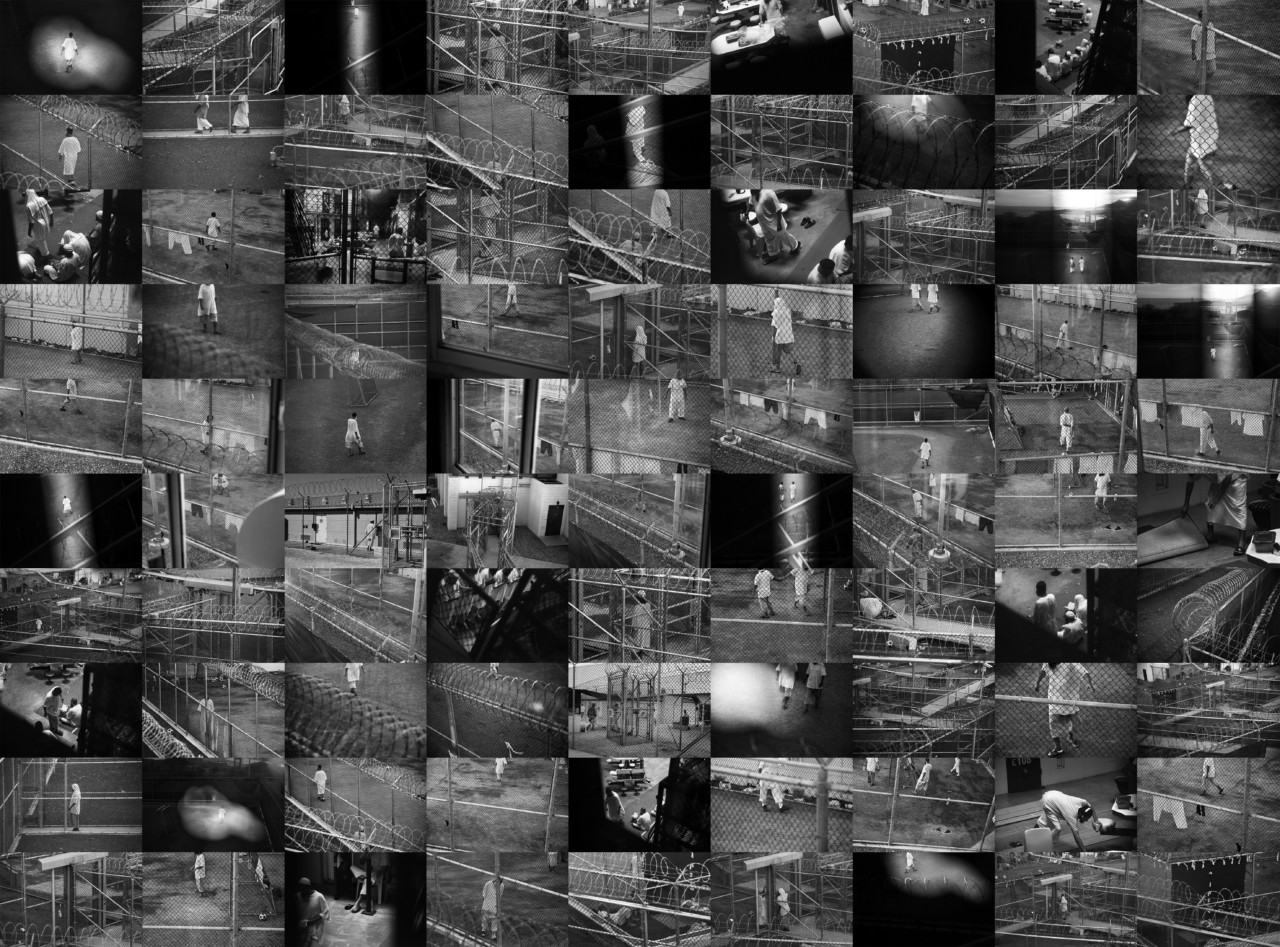 "The use of innovative display techniques continues throughout the exhibition. Photographs are combined in grids, mosaics and montages to evoke the human experience of the photographer and his subjects" 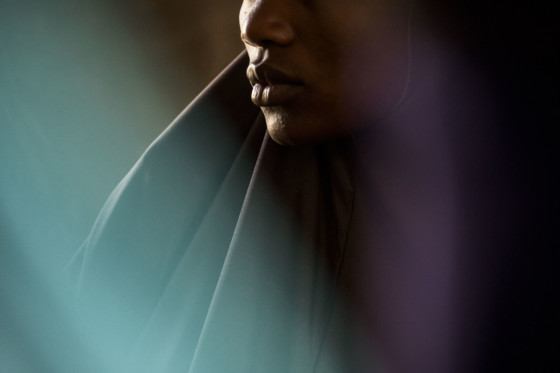 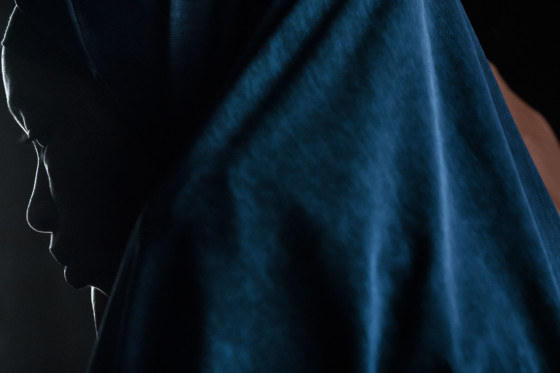 Occasionally, the exhibition struggles slightly with Zaha Hadid’s architecture.  A sequence of Pellegrin’s beautiful, ghostlike portraits – made as people emerged from the Tokyo metro as part of Magnum’s Storm project in 2010 – are displayed in front of a wall of windows.  The portraits look wonderful in soft evening light but are less effective against a backdrop of dazzling morning sunlight.  The structure of the gallery also impacts on the final section of the exhibition – featuring Pellegrin’s photography of nature – which seems a little cut off from the main narrative.   But these minor points do not detract significantly from an appreciation of the exhibition.

Un’antologia is a fitting tribute to Pellegrin’s lifelong engagement with the human condition, but it also serves as an important reminder that reportage photography was, is, and always will be far more than simply a medium for news and information.

Un’antologia will be on show at MAXXI Rome from Nov 7 to March 17, 2019.  Pellegrin’s latest book, Paolo Pellegrin, edited by Germano Celant and published by Silvan Editoriale, will soon be available in an English language edition. 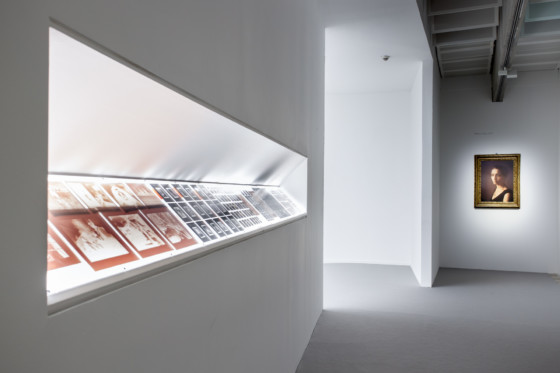 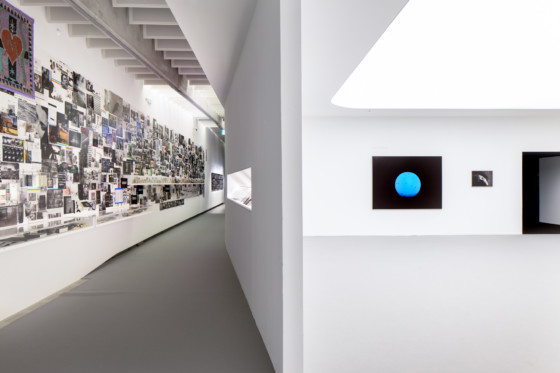