Focusing on the life of one man in assisted living, GENE, offers an insight into loss, memory, and the sometimes harsh realities of growing old 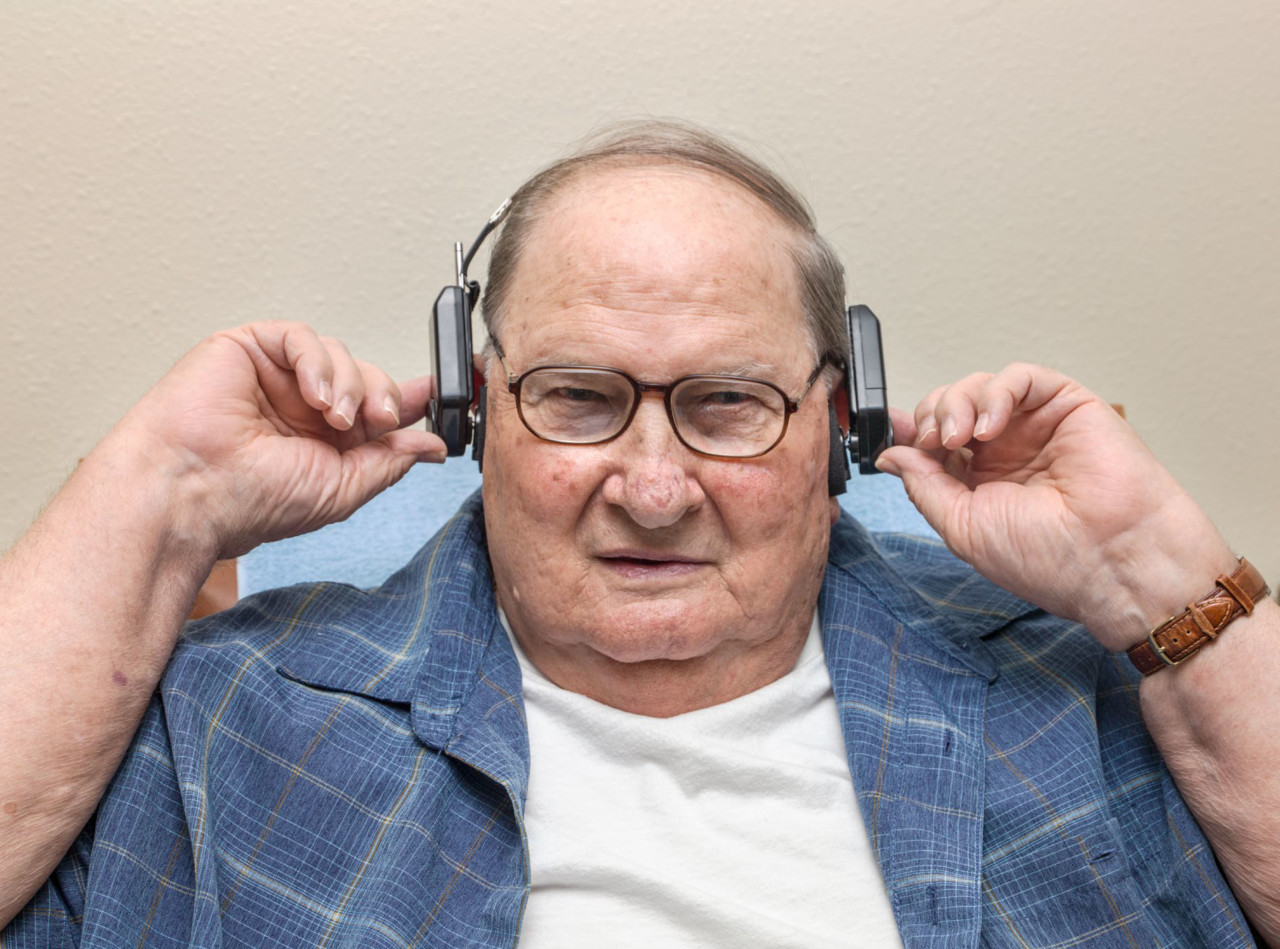 Gene Egner isn’t looking at the camera. He’s listening. A pair of clunky black headphones rests on his head, brown-rimmed glasses, liver spots, a ruler line of a mouth. He has one finger pressed to his ear, head tilted ever-so-slightly to the sound.

“He listens so carefully to the world around him,” says Magnum photographer Jim Goldberg. “Sound becomes his way of documenting his days at Harvest Homes, where he currently lives. He listens to Johnny Cash. Willie Nelson. The trains in the old country songs remind him of when he worked on the railroad.”

GENE, is a tender portrait of a man; “a man of humour and insight, and not without some shame”, the photographer tells me. Its roots are in a project that started in 2011, called Postcards from America, when Goldberg travelled with a group of other Magnum photographers in an RV through the American Southwest. Since then, Goldberg has continued to make work in the US, gleaning glimpses of the changing social climate. In 2015, this took him to Portland, Oregon.

“Gene lives in an assisted living community, which is often the precursor to a nursing home.” 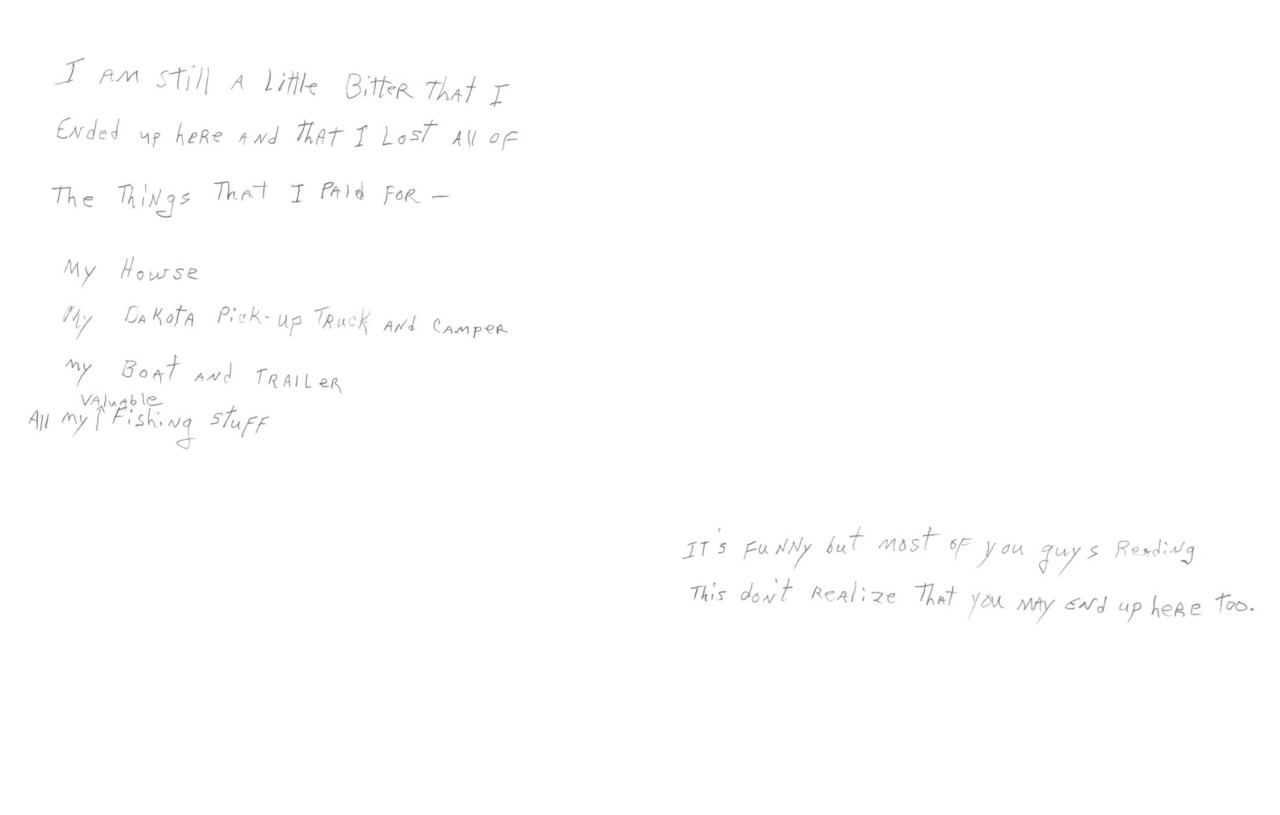 The project has precedent. For his 1985 series, Nursing Home, Goldberg photographed nursing home residents in Cambridge, Massachusetts, then encouraged them to write their own thoughts about the photographs he’d taken. While that collection centred on many lives in one building, GENE is different in its focus on one man’s life. Fittingly, the opening pages of the book are filled with old photographs of Gene as a young man, of his boat, his family, his daughter’s wedding. Around the pictures are disarming annotations: “I still have this hat”, “Deer hunting with doc”, “I don’t remember who is in this pic”.

Goldberg explains that these images were unearthed with the help of his daughter, Jennifer. “She brought over a box of family photographs which we used to help illustrate the timeline of his life.” 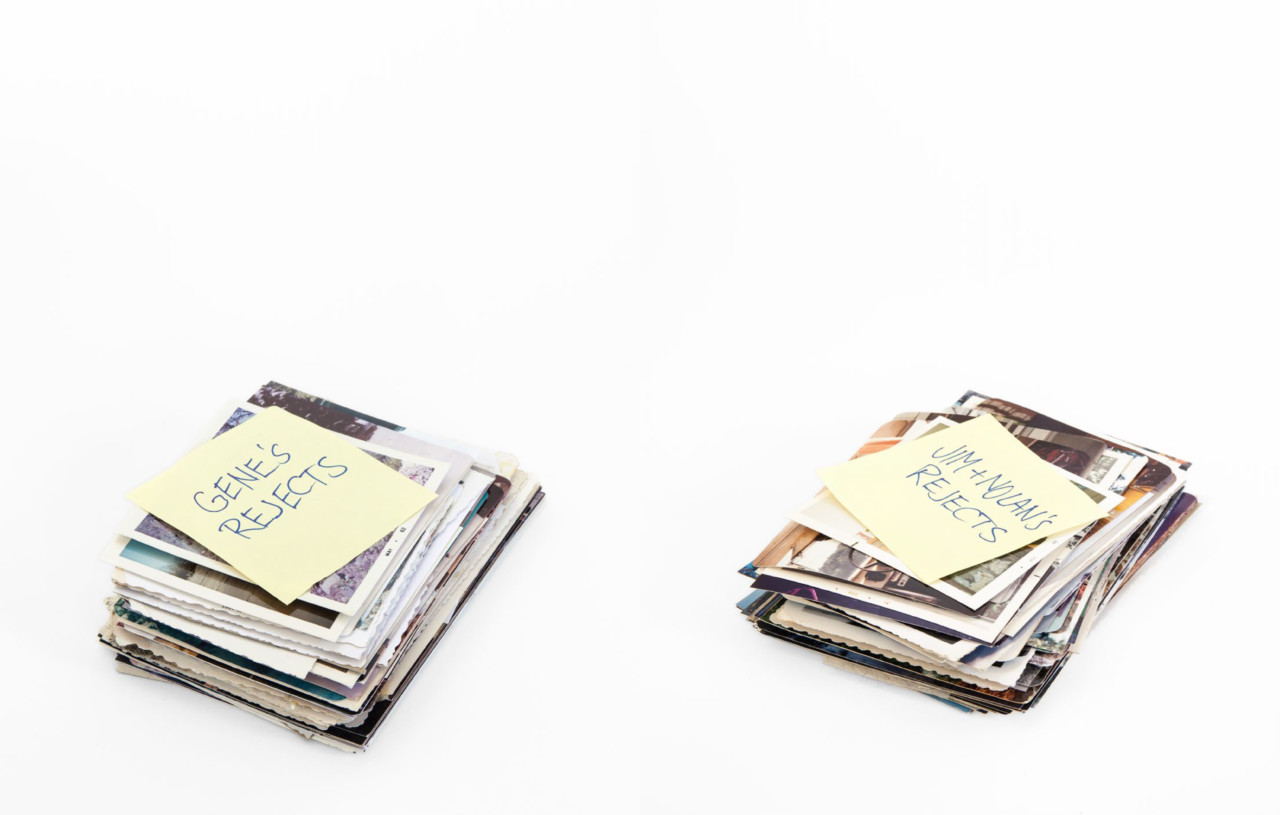 Amongst the early images in the book is one of two piles of photographs, labelled ‘Gene’s rejects’ and ‘Jim + Nolan’s rejects’ respectively. Goldberg worked with Nolan Calischon the project, and all three worked to select photos that would fit for the book. I’m told transparency was behind the decision to include a picture of those reject piles, but there’s ultimately something powerful in how they hint at a wider life, kept out of view, beyond the bounds of a brief photobook.

Indeed, look closely and you’ll find threads that Goldberg presents without pulling. At one point Gene writes he is “still a little bitter” that he’s ended up in Harvest Homes, and that he has lost his house, his truck, his boat and his fishing kit. Elsewhere, an old photo shows Gene and his daughter beside a human-shaped void; a “25-year mistake” cut out of the picture. 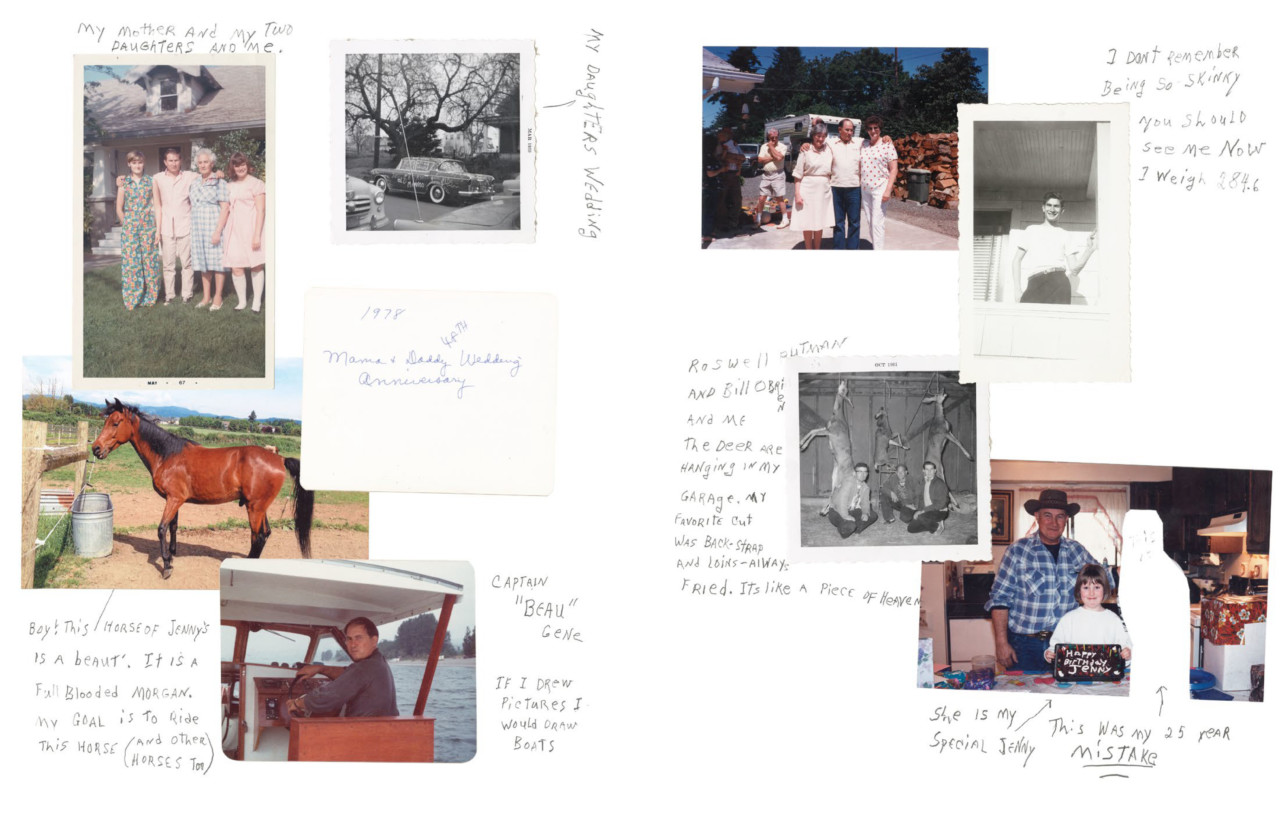 "An old photo shows Gene and his daughter beside a human-shaped void; a “25-year mistake” cut out of the picture" 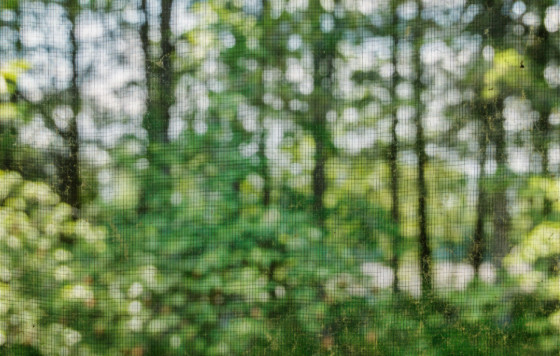 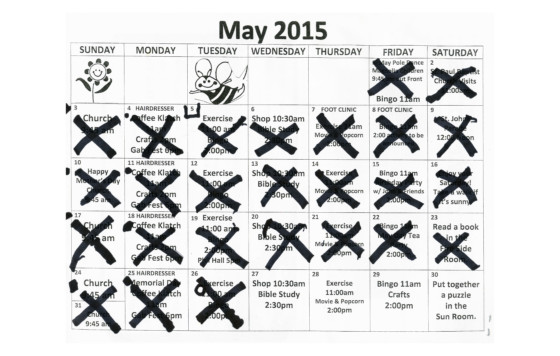 “It speaks to how people want to control their history,” says Goldberg. “We all do. We all deal with our own feelings of legacy, small and large. You see his take on why he’s in this predicament of losing his house, of losing everything he had. Maybe it was about ageing. Maybe it was about an ex-wife who took everything. I don’t know it all. I only know the story he wanted to tell.”

The book gives space for Gene’s past, but not in a way that overwhelms who he is now. Goldberg’s projects often pull on documents, maps, drawings and text as well as original photographs, and one of the starkest images in GENE is that of a calendar from the Gene’s care home, dated May 2015. Thick, irrevocable crosses mark time gone, all below the gaze of a smiling flower and bumblebee. The remaining days are structured, built around bingo, crafts and bible study. 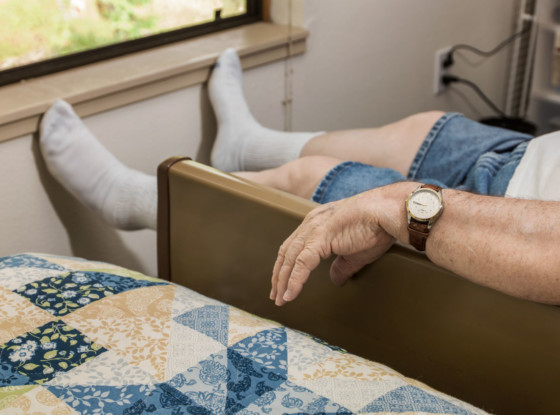 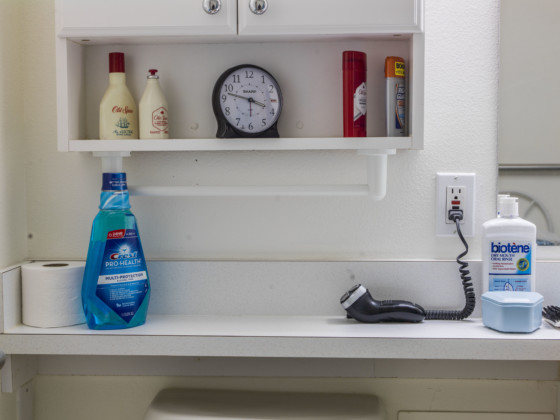 We see the same calendar on Gene’s kitchen table as he digs at a bowl of noodles. In another photo his hefty hand grips a fork, tentative between a half-finished fish and a portion of cake. Elsewhere, a clock stands between shaving cream, deodorant and multi-protection mouthwash – taken two times a day. Black crosses, meals and brightly colour bottles measure out Gene’s routine, and yet, as Goldberg says, Gene has his own way of documenting days at Harvest Homes. He writes about listening to the world outside his window, to the sounds that remind him of his past life, from trucks and machinery, to animals in the trees.

“He looks out of his windows, sees that it’s Spring and that the squirrels are screwing outside his window,” says Goldberg. “Life keeps going on. He likes that.”

Across three images, Gene puts on his pair of clunky headphones, twiddles one side, then both. Finally, in the third picture, he sits with arms aloft, eyes closed, mouth open in ecstasy. It’s a beautifully unguarded shot. In that moment, the old photos, the fish dinners, the aging body and the painful memories seem to vanish.

“I want to distil the idea that he puts on his headphones and he goes into another world,” says Goldberg. “He goes somewhere else when he listens to music­ – a liminal state that knows no age and is timeless. Music is a powerful force in a his life.”

Buy a signed copy of this book on the Magnum Shop here. 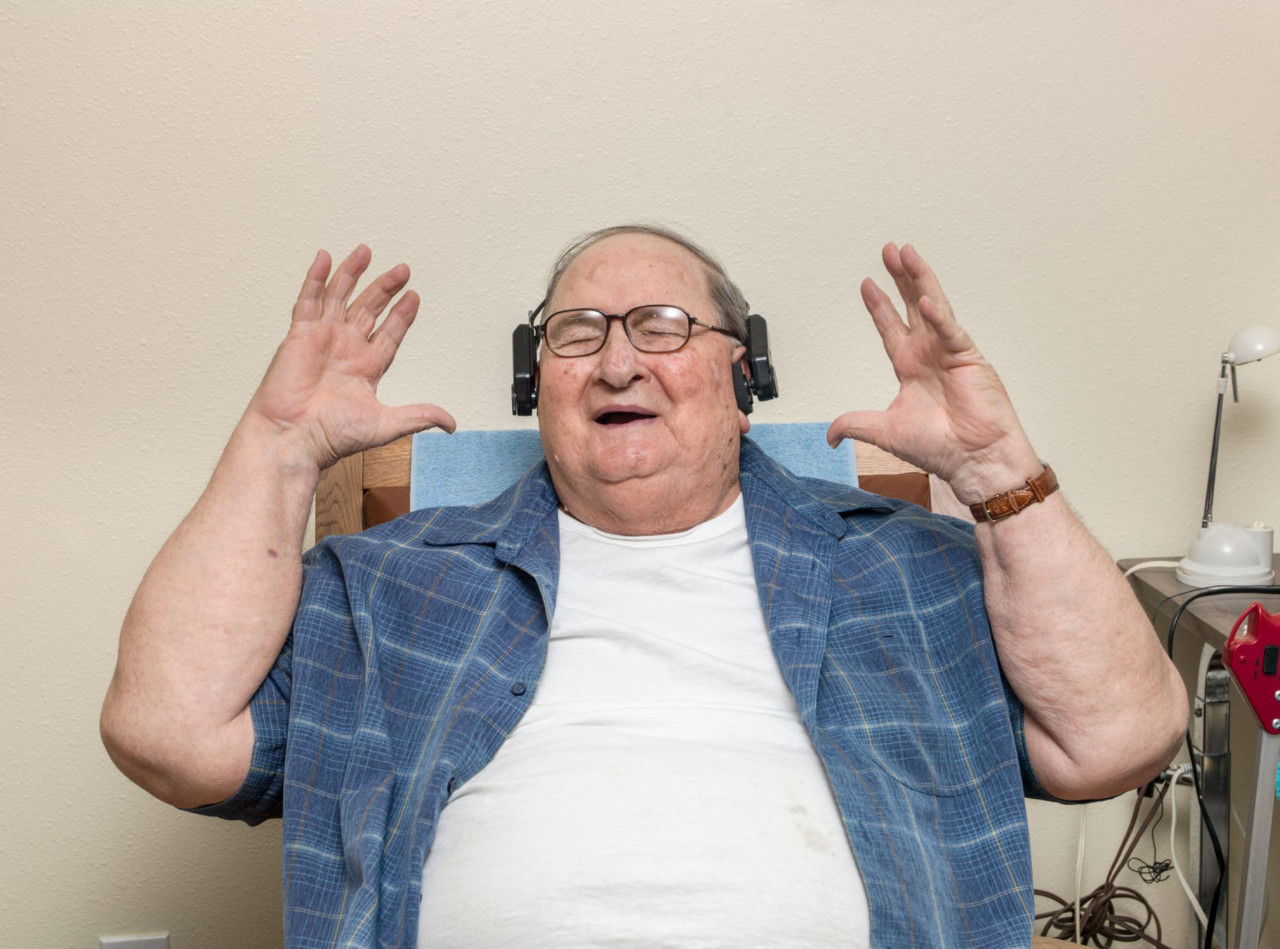