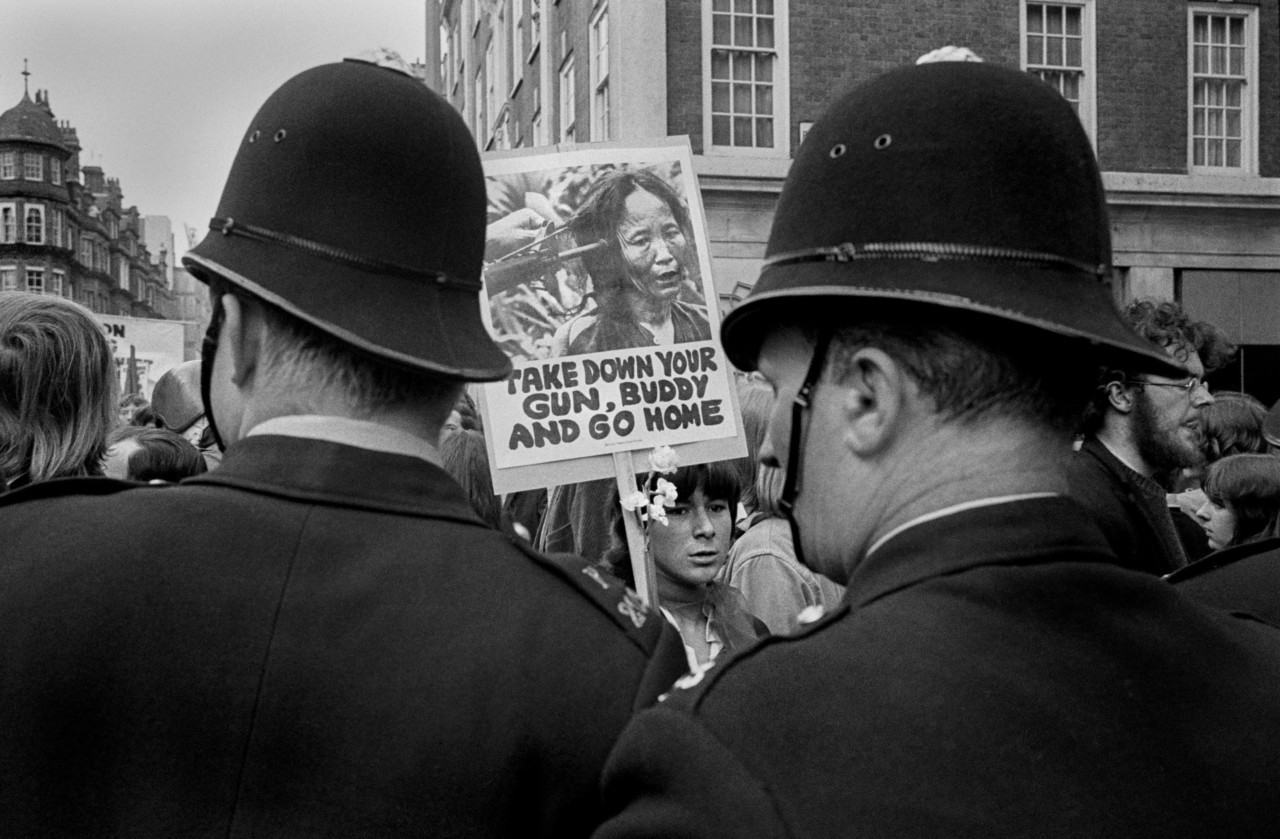 David Hurn The protesters had broken away from another, bigger, march against US involvement in Vietnam but were confronted by a wall of police. Grosvenor Square. London. England. G.B. 1968. © David Hurn | Magnum Photos

By 1968, a resistance movement against the Vietnam War, which began simmering on American college campuses in 1965, had boiled over into a global movement. On March 17, 1968, an estimated 10,000 people in London demonstrated against American action in Vietnam and Britain’s support for the United States. The protests began in Trafalgar Square and culminated in clashes outside the United States Embassy in Grosvenor Square. More than 200 people were arrested, and St. John Ambulance volunteers reportedly treated 86 people for injuries; 50 were taken to hospital, including up to 25 police officers.

Magnum’s David Hurn lived in London at the time, and covered proceedings from the start to the raucous end, sustaining injuries to himself in the process. “At that time you could work one of two ways: you could either try and get an assignment for a newspaper, which usually meant you had a position in which you were kind of stuck, or, as I preferred, you could try to do the whole thing as a story,” he says, recalling his strategy on the day. 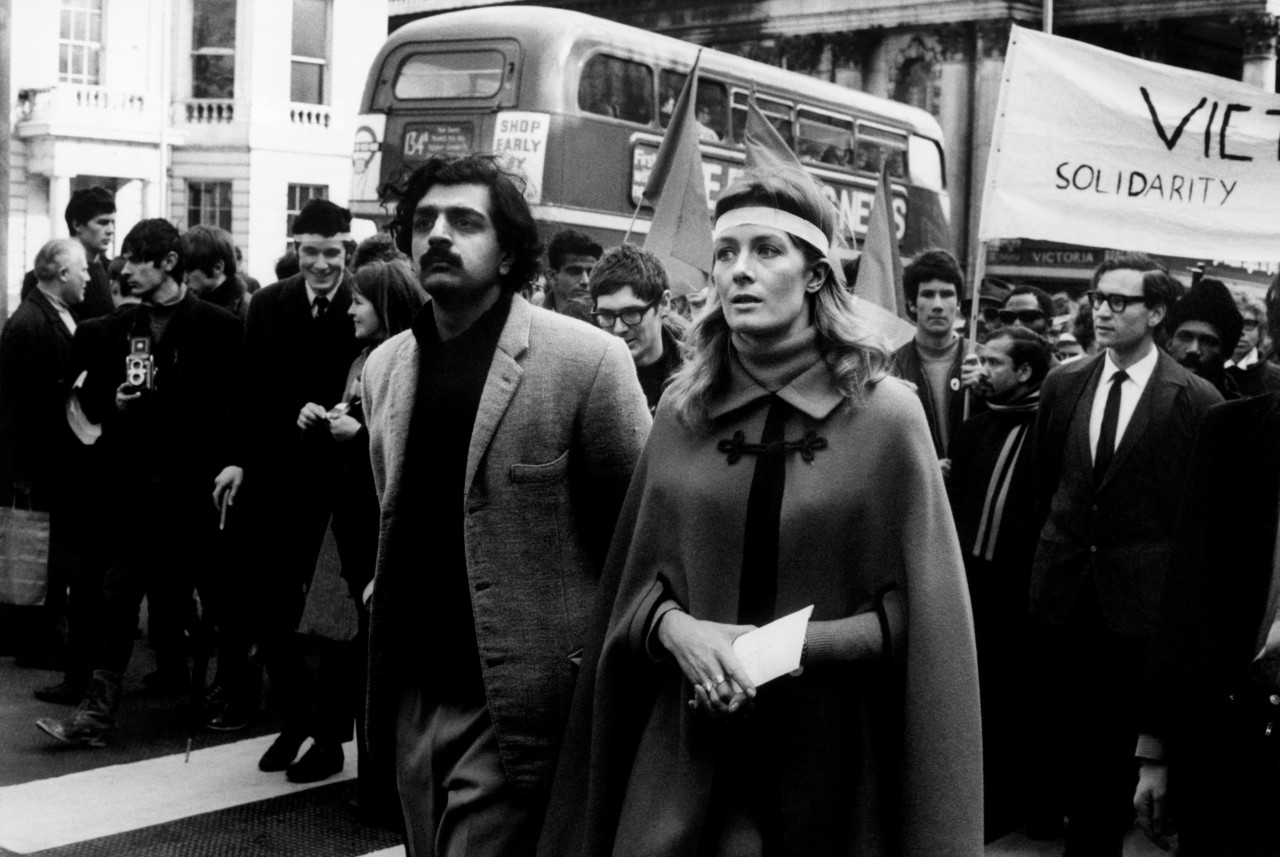 "When the marchers get there, you’re not going to be able to break through the ring of police and get inside. You’ve got to be there waiting" 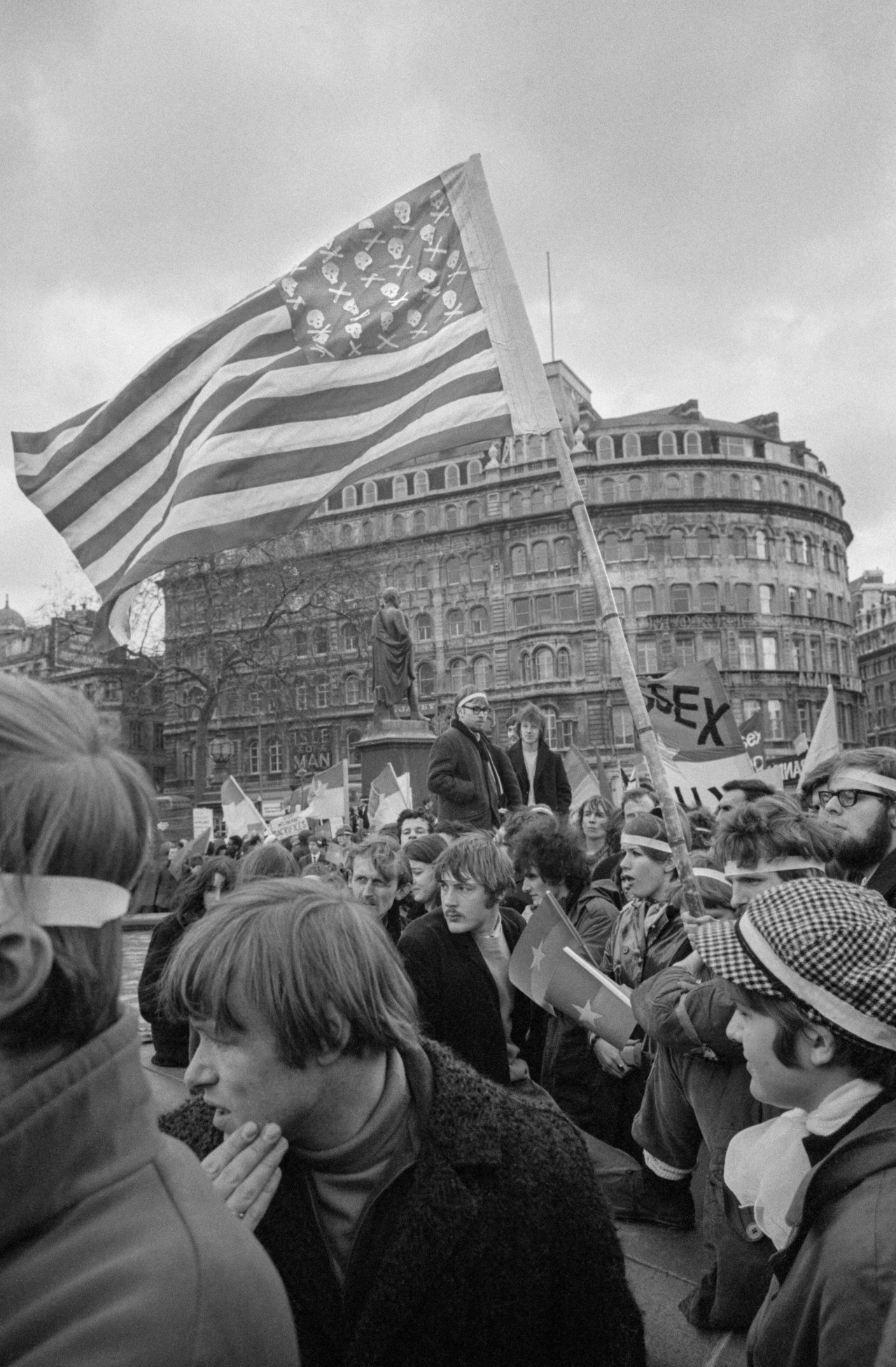 Knowing where the protests would start and their likely heated culmination by the Embassy, Hurn used a bicycle to get ahead of the march once he’d taken initial shots of the gathering, managing to get behind police lines well before protesters arrived. “When the marchers get there, you’re not going to be able to break through the ring of police and get inside,” he says. “You’ve got to be there waiting. In a strange sort of way, you were part of the police because you were just behind them…I was one of the very few people inside taking pictures because very few people could get in there.”

Hurn headed home to do his developing, which in those days photographers would often do themselves, and then, in the case of Magnum, file to Paris for distribution. It was only at this point that he realized he’d been injured. “I appeared at the front door covered with blood, which I didn’t realize until I looked in the mirror. I wasn’t badly hurt, I was just cut reasonably badly,” he remembers.

"I appeared at the front door covered with blood, which I didn’t realize until I looked in the mirror" 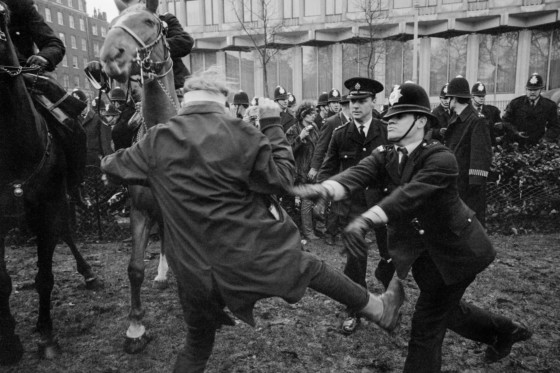 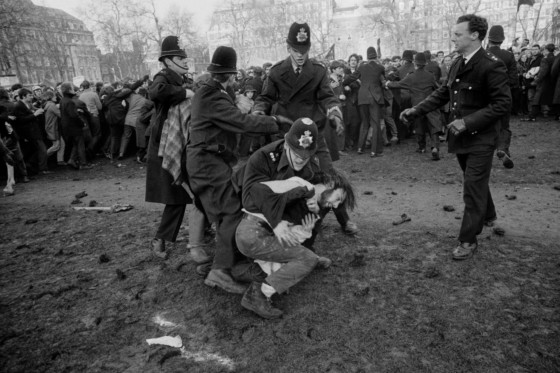 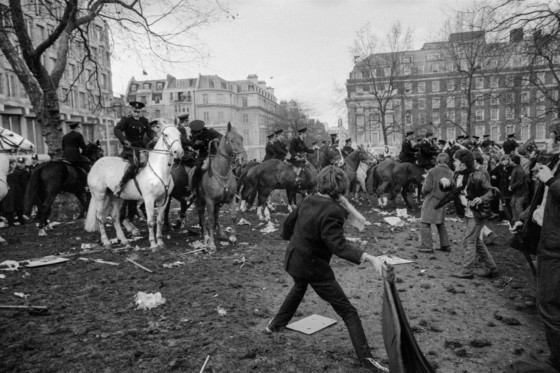 Looking back at the legacy of politically motivated marches that have taken place in London, Hurn admits his own cynicism when he says that he “doubts that any of these marches had much effect at all. There’s more bombs around now than there were then, so in that sense it didn’t make an enormous difference.” 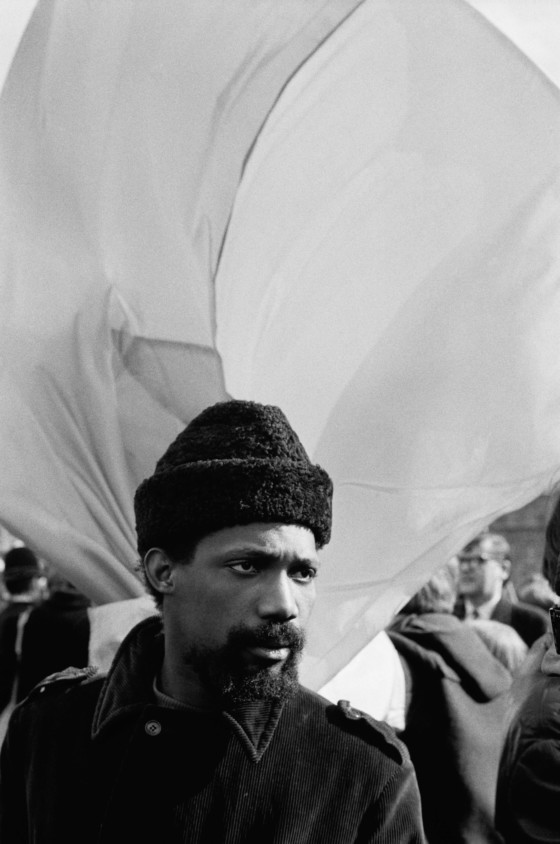 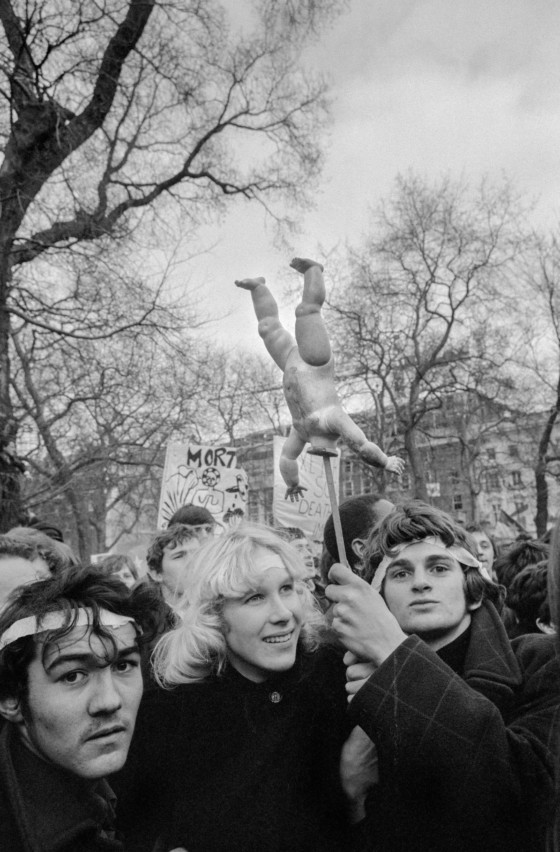 "If you’re not allowed to photograph these events, then you know the situation is even worse"

The veteran Magnum photographer is also quick to commend his colleagues who have taken pictures of protests under far riskier conditions. “The work that Newsha [Tavakolian] did when she was in Iran, that took an enormous amount of courage, and it’s documented and she has the pictures. I’m glad it happens, I’m glad we do it,” he says.

Globally, 1968 was a turbulent year in politics: the Vietnam war raged on and became increasingly deadly. Public opinion turned and protests broke out across campuses and cities in the US, culminating in protests outside the White House and clashes at the August Democratic National Convention in Chicago. In France, the May riots saw the occupation of universities and factories spill into the streets of Paris. Throughout the summer, the ‘Prague Spring’ was a period of political liberalization in Czechoslovakia, while the Mexico Olympics became a focal point for resistance with the ‘black power’ salute appearing on the awards platform. Japan also experienced its own upsurge in militancy and grass-roots activism. These flash points of resistance were captured by photojournalists, whose cumulative work, seen worldwide, created the impression that the frenetic protests of 1968 represented a unified movement of change.

Over 2018, Magnum Photos will be revisiting some of 1968’s seminal moments, as captured by Magnum photographers. 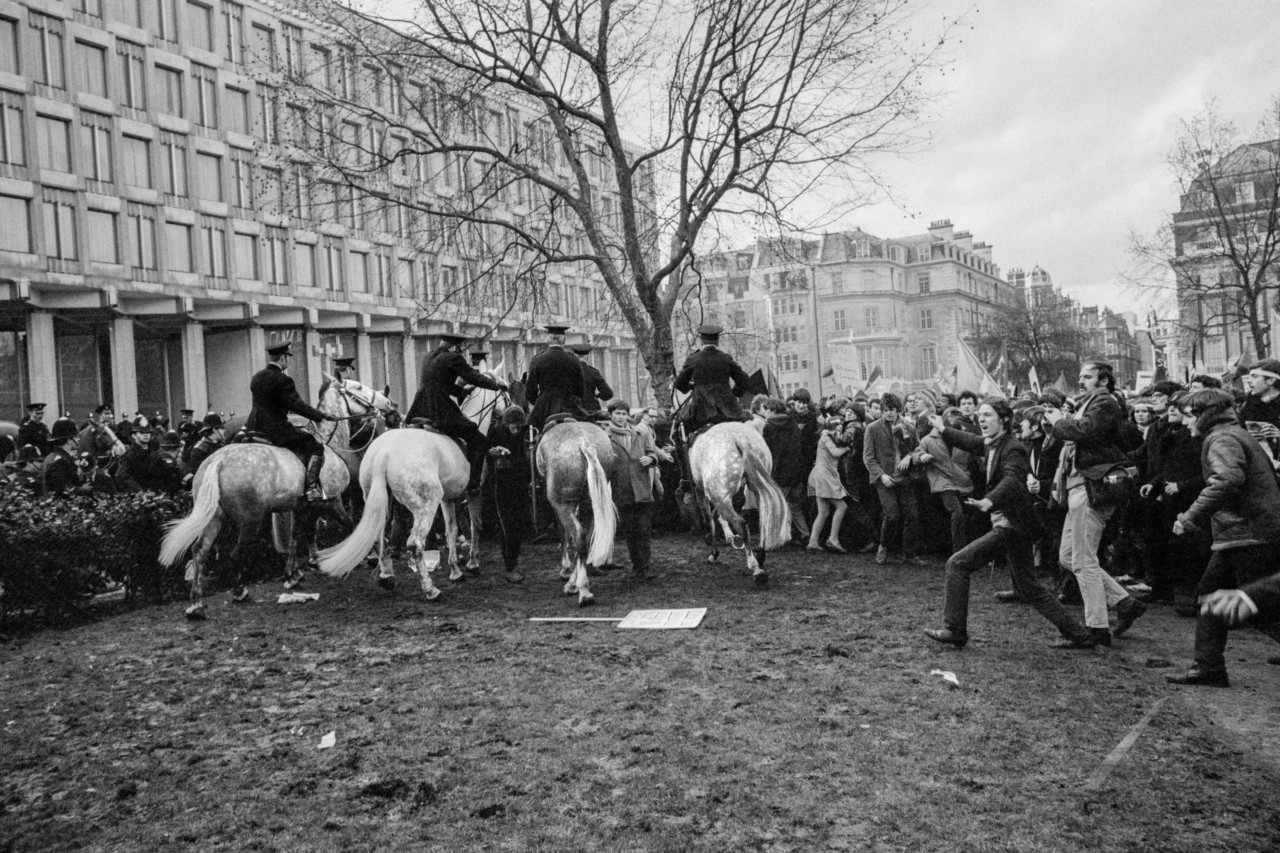