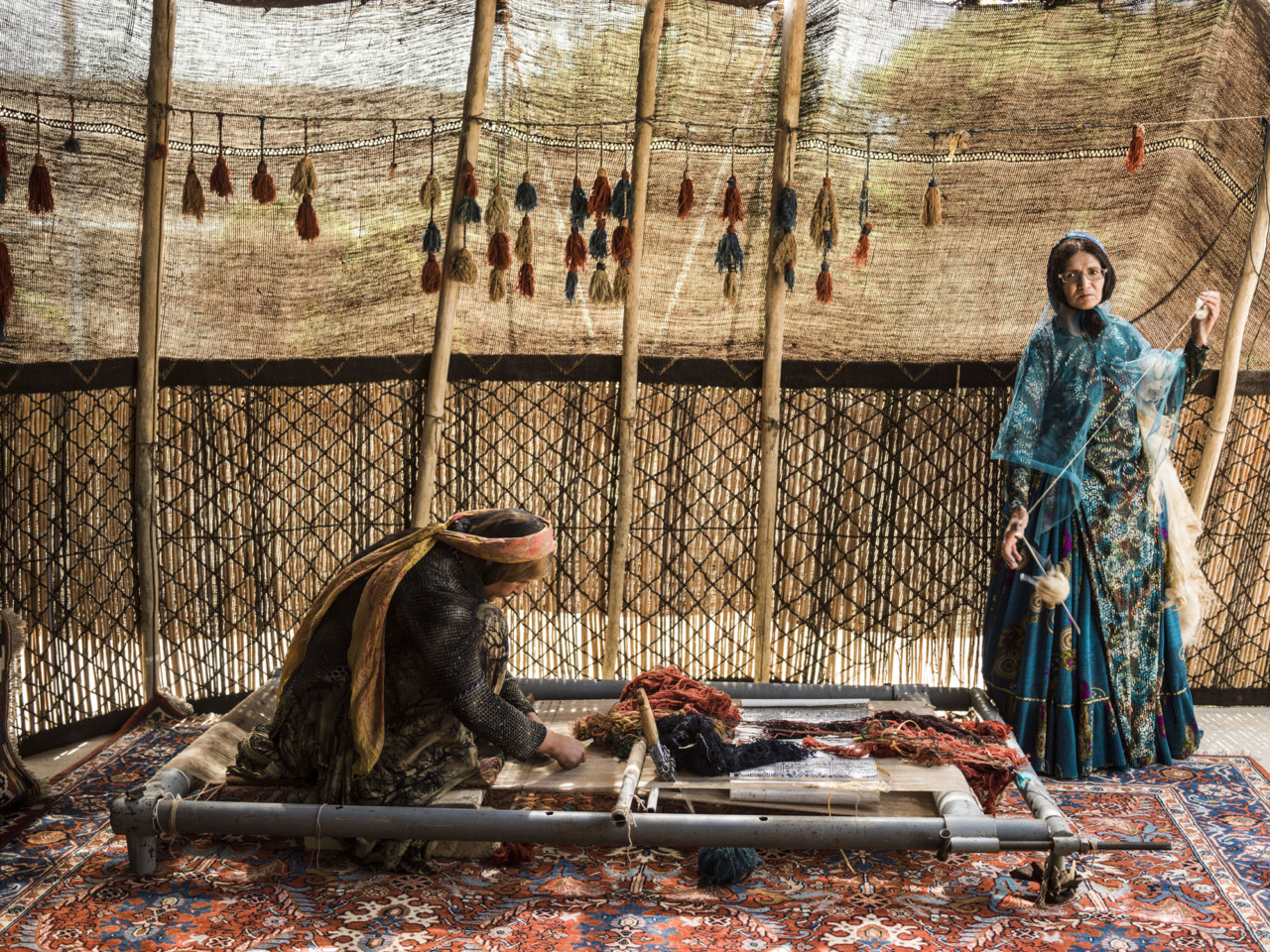 Newsha Tavakolian Nomads and others at a carpet production centre owned by a influential family of carpet traders, outside of Shiraz. With the rise of modernity many nomads have moved to cities leaving behind carpet (...)
production, and often facing difficulties adopting to the new urban culture. Nomads are the most important producers of carpets in Iran. Iran. 2016. © Newsha Tavakolian | Magnum Photos

For nearly 20 years Sarah Leen worked as a freelance photographer for the National Geographic magazine. She eventually joined the staff as a senior photo editor in 2004, and now oversees all visual content creation and photography staff for the National Geographic magazine, NG Traveler magazine, thenatgeo.com website and the @natgeo photography social media sites. She has won numerous awards for her photography both in the Pictures of the Year (POYi) and the World Press Photos competition, and so is a natural choice to be a judge for the 2017 LensCulture and Magnum Photography Awards. With the competition underway Magnum spoke to Leen about her professional eye and commissioning style.

Leen’s interview is presented with a curation of some of her favourite Magnum photojournalism images. “Magnum is deservedly famous for its amazing photojournalism since the inception of the agency,” she says. “It continues to hold that bar very high while it has recently been incorporating more contemporary photographic voices. Ambiguity, mystery, irony, the gesture, the glance, the question not the answer have added a new dimension to the work the agency is producing. And I feel that has also strengthened its conversation with the viewer. For me I love that intersection between art and journalism. The work from Magnum has certainly come to own that space.” You freelanced for almost twenty years before moving to National Geographic. What informed your decision to move from full-time photographer to photo editor?
I always loved editing and teaching photography even while I was still working as a full time photographer. I thought someday I might like to try to do it more intentionally. I received great joy working with photographers when I could help them achieve their goals, as much as making the images myself. Eleven years ago, a photo editing position opened up at the National Geographic magazine so I decided to apply. I thought if any publication might hire me to edit then it would be NGM. And they did, and I have never looked back.

Do you find that your experience in the field as a photojournalist gives you some advantage when it comes to editing/directing photo stories?
I believe it has been hugely helpful. I can speak very intimately with a photographer about how they are using the camera in conjunction with their bodies and minds to create an image. I can have a conversation about a story idea and determine how visual it might actually be or how difficult it may be to accomplish. The downside might be for the photographer if I am looking at the images and I see something in an image that I don’t think the photographer is seeing, then I may pressure them to push themselves more. 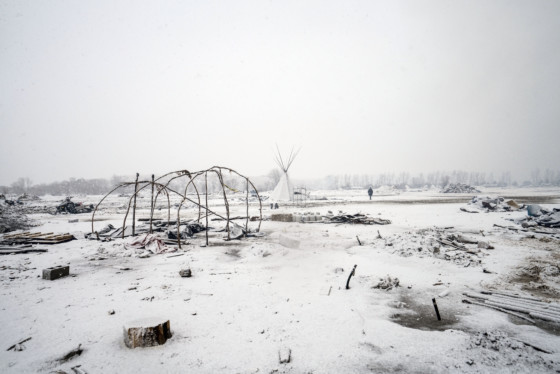 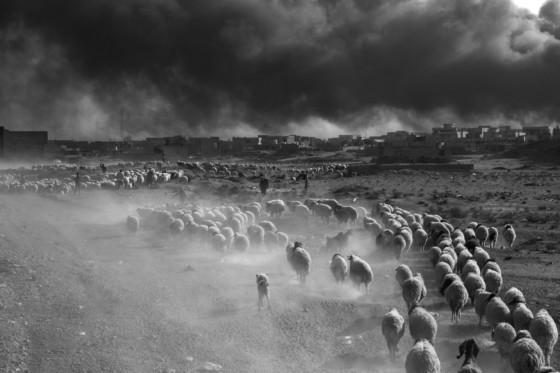 Paolo Pellegrin People flee ISIS controlled areas carrying with them their possessions and in the case of farmers their sheep. Over the summer, in an effort to prevent coalition airstrikes, ISIS fighters set ali (...)
ght oil fields around Qayyarah, a city southeast of Mosul. The fires have been sending noxious black smoke into the atmosphere ever since. Iraq. 2016. © Paolo Pellegrin | Magnum Photos

What additional skills do photographers need to make the leap into commissioning and photo editing?
A photo editor needs to have a broad knowledge of photography past and present and know a wide range of contemporary photographers and  where they are and what type of work they can do. They need to have impeccable taste and sure sense of what they like. They need to be very connected to how a photograph makes them feel and have the language to be able to express what they like or do not like about an image. They need to understand the basics of visual storytelling, how images speak in their own language that is independent of the text. They also need to be highly organized project managers who can research visual ideas as well as manage budgets.

You oversee the visual content for a number of different platforms—print magazines, websites and social media. What have you learned about which images work the best on, say, Instagram, compared to printed in the pages of a magazine?
I believe the best image should be published no matter what the platform is. That is the first consideration: what is the best photograph for the story. Then we need to consider the restrictions of the platform, like for Instagram most of the images are square so they need to be composed or cropped appropriately, they need to read at a small size and until the gallery feature recently released; it was all about the single image, but now there is the opportunity to publish a series where we can do more storytelling. In print we are all about the storytelling and not the single image, though every image in the story should be able to stand on its own. "Now more than ever our type of reportage is extremely important" What, for you, defines the ‘National Geographic’ photographic style?
There may have been a “Nat Geo” style in the past but I don’t believe that is the case now. We determine what is the best approach for each individual story. Most often it is straight photojournalism but sometimes it is portraiture or landscape or a more quiet, artistic approach. We use all types of photographers with very different visions. Our main goal is to keep it real. I have very eclectic tastes when it comes to photography so I am open to considering new approaches if it is appropriate for that story.

With all of the contemporary concerns about the environment and climate change, what do you consider to be the most important aspect of the magazine’s mission today?
I believe we are one of a very few media organizations that are still investing in long-form visual storytelling about the environment, natural history and science. Now more than ever our type of reportage is extremely important. We need to inform our readers about these very important topics so the public can make informed decisions. We also are in the business of showing the world the extraordinary diversity and beauty of our planet in the hope that it will make people care and want to preserve it. 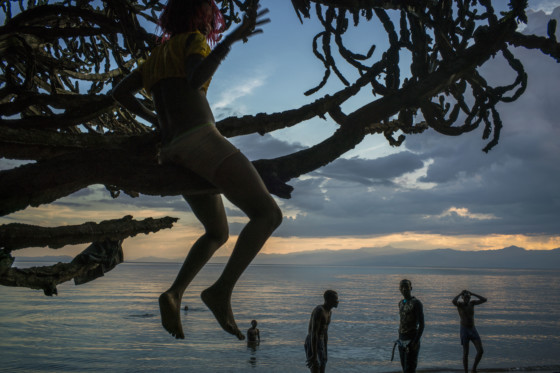 If a photographer wants to pitch to National Geographic, what is your top piece of advice in regards to their submission? What is the best way for someone to catch your eye?
First, know the kind of work that we are doing, and the work we have done to determine whether your idea is really appropriate for our publication and hasn’t already been done by us in the past few years. Too many photographers send in ideas that tell me they haven’t done their research or really looked at the magazine to see what is right for us. A photographer should know what they are talking about and not over promise what they can deliver. If it’s a place or idea where special access is required can you really get that access? Is what you think is happening really happening. And of course is it visual, wonderfully visual? I want to hear about things I am dying to see images of.

When you are judging competitions, what catches your eye? Is there anything you look for specifically?
I want to see the work and want to be surprised and delighted; I want to see work that lives at the intersection of art and journalism. I am always looking to fall in love with an image or series of images. I want to be seduced by the work and have an emotional response to what I am seeing.