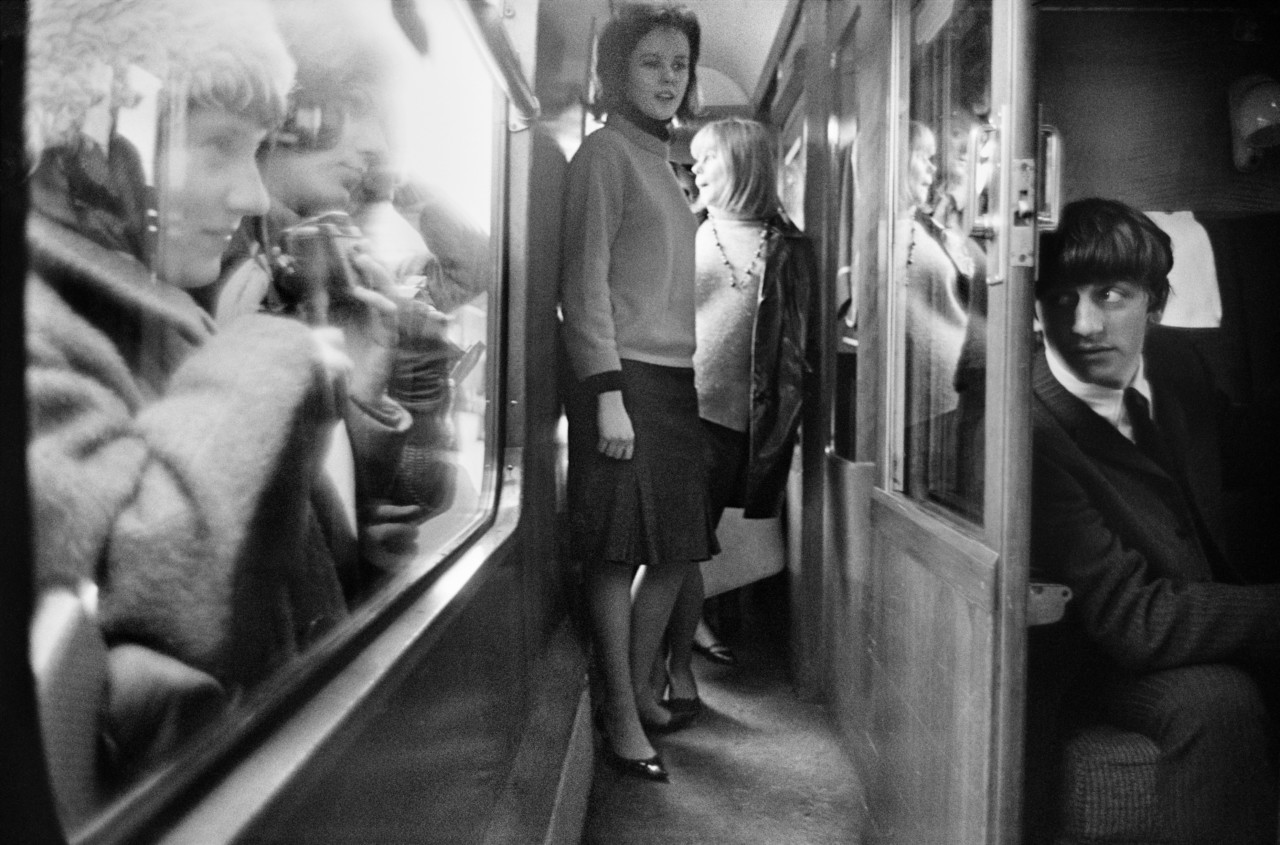 In 1964 The Beatles starred in the feature film A Hard Day’s Night. Blurring the lines between the reality of their pop-star status and fiction, the film follows several days in the life of the group as they navigate television appearances and record label executives. Coming at the height of ‘Beatlemania’ the screaming fans depicted in the film were mirrored by the hoards of fanatic young girls that would await the band at all of their public appearances. David Hurn, following a tradition of Magnum photographers working on film sets, took this photograph of fans eyeing Ringo Starr on the moving train, where the film was primarily shot.

The Behind the Image series uncovers the untold stories that lie behind some of the most-well known images by Magnum photographers. Here, we speak to Magnum photographer and judge of the 2017 LensCulture and Magnum Photography Awards David Hurn to discuss the sequence of events that led to the surreal moment, and what might have happened had he not taken that shot.

The photograph was shot in 1964 during the making of the film A Hard Days Night, a film staring The Beatles. Ringo Starr (Richard Starkey, MBE), is sitting in the carriage of an old-fashioned train. Fans have invaded the train and are looking through the outside window.

I was asked to be ‘special photographer’ on the film. My position largely came about through what is called networking. When I started in photography I had a friend, John Antrobus, he became a comedy writer and joined an agency called Associated London Scripts, who included writers such a Spike Milligan of The Goon Show fame. Together, they wrote for Peter Sellers who made The Running, Jumping and Standing Still Film. This was directed by Dick Lester. The Beatles were fans of this film so when Dick Lester was asked to direct A Hard Days Night, I came as part of the package.

The film was shot in near sequential order – very rare – shooting began on 2 March 1964. Most of the shooting was done on an actual traveling train leaving daily from Marylebone Station (London) traveling to Minehead (Somerset). It meant space was very confined – sometimes in a small carriage, there had to be the four Beatles, the director, the lighting cameraman, and of course at that time a large cinematic camera. I was considered an annoyance.

The train would stop, for various filmic shooting reasons, several times during the journey. Miraculously, thousands of fans would appear at every stop seemingly from nowhere – I spent a lot of time photographing action between bodyguards and police and those fans. This was difficult as I had to judge how long the train was stopping for, and I had to make sure I would be able to get back on to it – usually with a gaggle of young girls trying to be in tow.

I would have rushed off to a pregnant partner.

Tell us a secret about this picture.

I think we were all slightly more tense than we admitted. Mass fans are very well-meaning, but like any unmanaged group, are likely to get out of hand. There was very little protection available and crowds can be extremely dangerous.