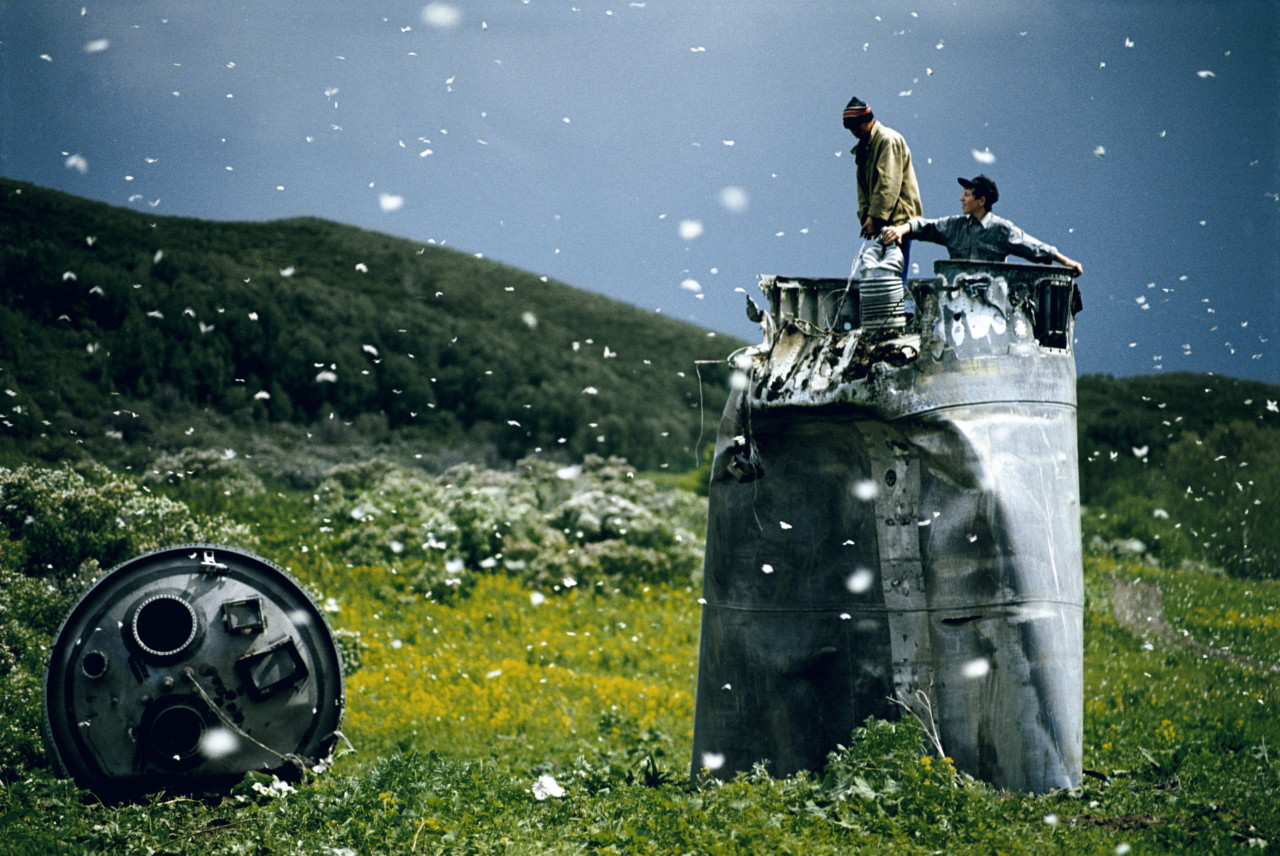 Jonas Bendiksen‘s 2006 book Satellites is the culmination of several years travelling across the southern borderlands of the former USSR to explore the unrecognized states, breakaway republics and remote communities that were born out of the collapse of the Soviet Union. The project took Bendiksen from Eastern Europe to Central Asia, including the spacecraft crash zones between Russia and Kazakhstan. It is the latter of these that brought Bendiksen to the Altai Territory in Russia in 2000, where he took the photograph of two villagers collecting scrap metal from the wreckage of a crashed spacecraft that would become the cover of the book.

For the first instalment of a new series uncovering the untold stories that lie behind some of the most-well known images by Magnum photographers, we speak to Bendiksen to discuss the sequence of improbable events that led to the surreal moment, and what might have happened had he not taken that shot.

There are two young guys, local farmers I think, who are pulling copper wire from the hull of a crashed Soyuz spacecraft – specifically the second booster stage. I was chasing a story about people who live in the areas under the flightpath of space rocket launches from Baikonur, Russia’s biggest spaceport. As we know, everything that goes up eventually comes down, and each time a space rocket launches from Baikonur the massive booster stages fall down to earth once their fuel is depleted. At least at that time they fell down into populated areas. While some locals complained about health problems and mysterious diseases allegedly stemming from the rocket crashes, others made good money out of them selling the precious high-grade scrap metal.

So I was photographing these men who had started ripping up the spaceship. It had just rained heavily, and the storm clouds were passing in the background, giving that dark background. The sky filled with thousands of white butterflies. Farmers, space rocket, butterflies, sunlight on stormy skies: all in all this is probably one of the most surreal and magical moments ever to pass before my eyes.

It was taken in the Altai territory of Russia, just north of the border with Kazakhstan in 2000. It was taken with a medium-sized telephoto lens, which is what makes the butterflies compress to fuzzy white out-of-focus dots. But on some of the more distant ones you can see the wings beating.

I’m definitely happy about this picture, it would be wrong of me to complain about anything. But having said that, right outside the frame there was a third guy on a horse. The image could definitely do with a guy on a horse in the middle there somewhere! Or maybe that’s overkill. Anyways it would have been fun to have seen it in there.

I do remember right after this there was a great big picnic party. All the scrap metal collectors and locals gathered down at the river a stone’s throw away from the scrap. Lots of food, salads, snacks and quite a bit of booze. So if I hadn’t been photographing it I imagine I’d be lying down in the grass by the riverside, munching away on a great big juicy slice of watermelon.

Hm…well, I can admit that the evidence suggests that I didn’t really understand at the time that this would be a great picture. Maybe I just stumbled into it and it was pretty much down to luck, instead of buckets of talent and know-how. The contact sheet shows that I took three images in total from this angle, even though the situation went on for a while. I think I’ve got about half a roll of film of the entire scene. If I came across this today I suppose I would have recognized it for what it was and pushed that shutter button quite a few more times. But on the other hand back then in the film days, we were maybe better photographers who were better at trusting one’s instincts at the right moments?