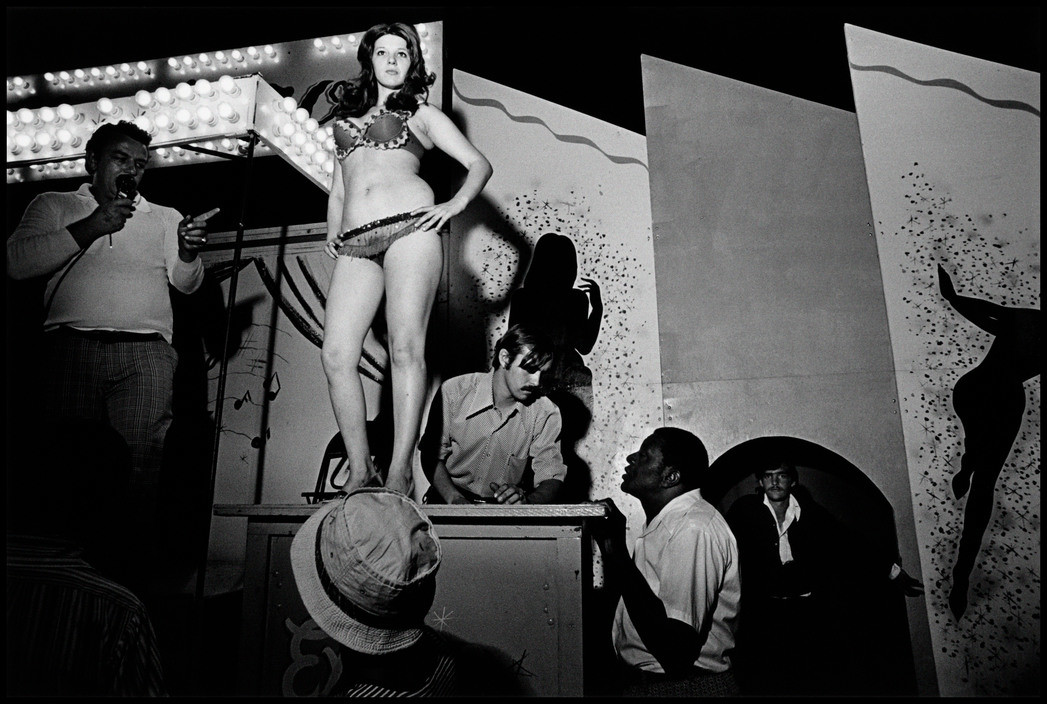 From 1972 to 1975, Susan Meiselas spent her summers photographing and interviewing women who performed striptease for small town carnivals in New England, Pennsylvania, and South Carolina. As she followed the shows from town to town, she portrayed the dancers on stage and off, photographing their public performances as well as their private lives. She also taped interviews with the dancers, their boyfriends, the show managers, and paying customers. Meiselas’s frank description of the lives of these women brought a hidden world to public attention. Produced during the early years of the women’s movement, Carnival Strippers reflects the struggle for identity that characterized a complex era of change.

The Behind the Image series uncovers the untold stories that lie behind some of the most-well known images by Magnum photographers. Here, we speak to Magnum photographer and judge of the 2017 LensCulture and Magnum Photography Awards Susan Meiselas to discuss the sequence of events that led to her taking a photograph of Lena in Vermont, an image that became emblematic of her Carnival Strippers series, and explains why it became the catalyst to her future career.

I can remember this moment as if it was not so long ago. I wasn’t looking for anything specific as I wandered on those fairgrounds, but when I saw this girl standing on what looked like an auction block, I stopped. She was there to lure men into The Girl Show, where women performed striptease inside a tent. Women like me could not enter. Lena was a young woman in her early 20s from a small town in Maine, she was close to my age. I only came to know her name and hear her story days after making this picture.

The picture was made in the summer of 1973, in Essex Junction, Vermont, at the back of the state fairgrounds, not very far from the rides and sale of cotton candy. I was standing watching her, along with mostly male onlookers. I had one Leica camera at that time.

Outside the frame are those behind and around me gawking at her publicly. Sometimes wives were watching alongside their husbands. The dressing room was behind the public stage, hidden within the truck. The private performance backstage was for men and men only. You can’t hear the barker calling out to the crowd or the scratched 45 records which each girl danced to.

This is only one glimpse of a complex relationship. Lena is surrounded by her male handlers. I was capturing many other moments in the working lives of both the managers and the women of The Girl Show, including their interactions with the public and the dynamic between the women who performed and traveled together. I spent three summers following them from town to town throughout New England.

Tell us a secret about this picture?

This is the picture that inspired me to become a photographer and begin to imagine a life telling stories with images.