Photographing the band from a ‘sociological’ rather than press perspective, Hurn gained insight on pressures that Beatlemania exerted on the Fab Four 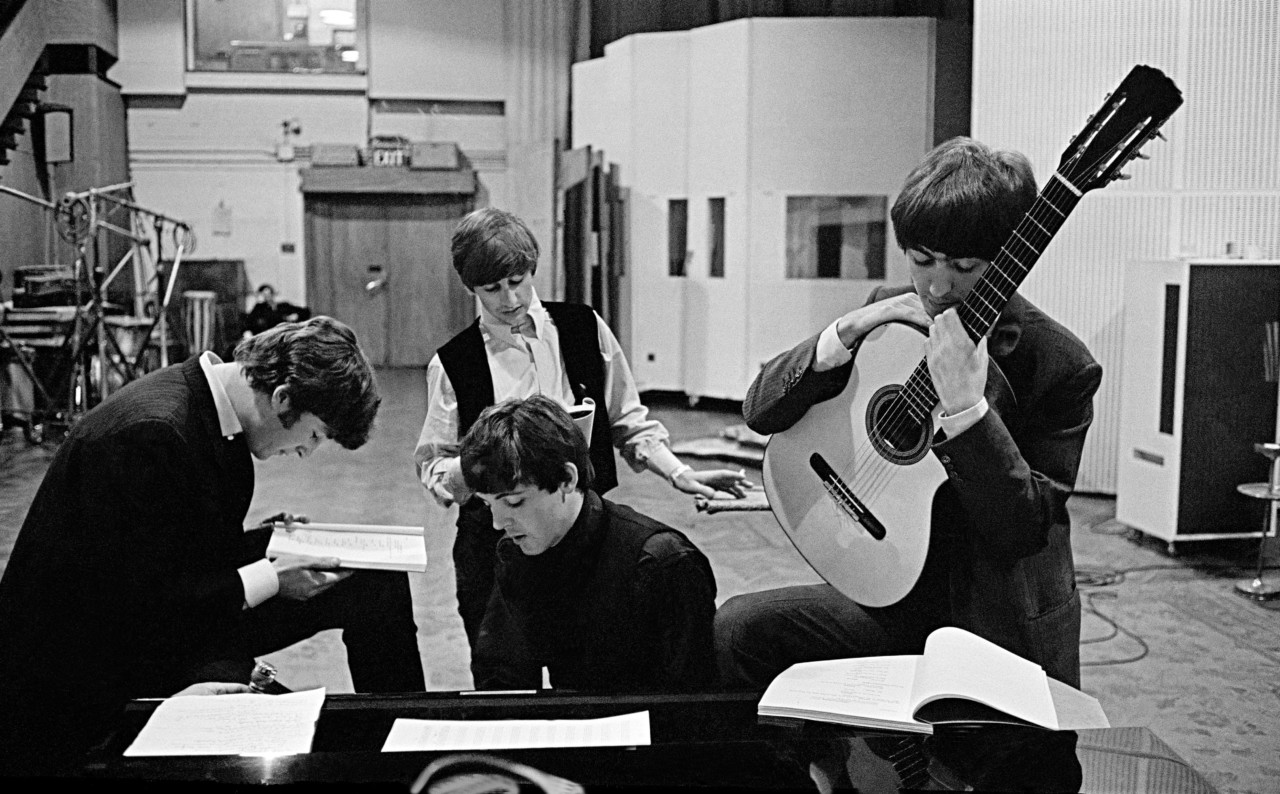 David Hurn The Beatles in EMI Studios, later renamed Abbey Road Studios, where many of their most famous records were made, examining the script of the film 'A Hard Days Night'. London. England. G.B. 1964. © David Hurn | Magnum Photos

Here we look back upon David Hurn‘s photographs of A Hard Day’s Night. You can see other stories in the Magnum On Set series, here.

This image is also available as part of the new Magnum Editions Posters collection, which features works from 33 Magnum photographers. You can explore the whole collection here.

“In 1964, I was asked by a friend – Dick Lester – who was about to direct the first Beatles film A Hard Day’s Night, to photograph the film, not for press, but more from a sociological point of view,” explains David Hurn, when asked how he came to photograph the most famous band in the world, as they played themselves in A Hard Day’s Night. Over roughly seven weeks in 1964, Hurn witnessed the complete chaos that surrounded the Beatles, then at the apex of their fame.

“In 1963, the Beatles had gained unprecedented fame and status. It could be argued that their only next step could either be down, or to individually go in new directions,” says Hurn, “They were at crossroads in their respective careers, and yet had already transformed the music industry.” 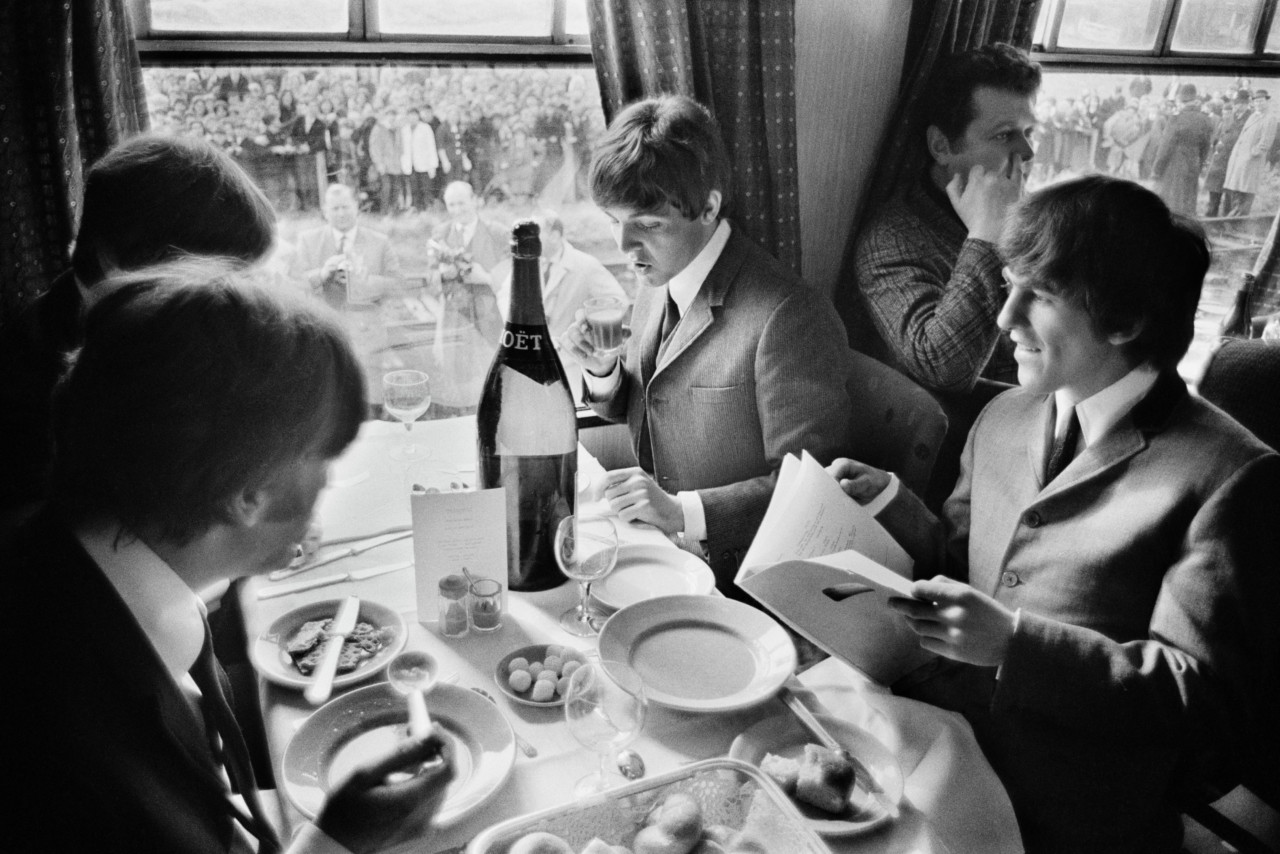 David Hurn The Beatles during filming of 'A Hard Days Night'. John, Paul, George and Ringo take time off, during the making of the film 'A Hard Days Night', for a meal on the train. Thousands of fans lined th (...)
e route. London. England. G.B. 1964. © David Hurn | Magnum Photos

Beatlemania was at its apogee during filming of the movie, during which time the band simultaneously occupied the top five slots on the Billboard’s singles chart, a feat that has never been repeated. Hurn found himself very much in the eye of that storm as he worked on the set of the musical comedy, which depicted 36 hours in the life of the Fab Four.

Lester’s film follows the band as they sprint from screaming fans, coming up with ever more ingenious ways of escaping the trappings and attention that comes with their fame. Much of the film was shot on a train between London and the West Country. As if mirroring the film’s story, fans and press photographers would crash the set daily. Hurn recalls the eerie ability of these super fans to seemingly appear from nowhere:

“The train would stop, for various filmic shooting reasons, several times during the journey. Miraculously, thousands of fans would appear at every stop seemingly from nowhere – I spent a lot of time photographing action between bodyguards and police and those fans. This was difficult as I had to judge how long the train was stopping for, and I had to make sure I would be able to get back on to it – usually with a gaggle of young girls trying to be in tow.“ 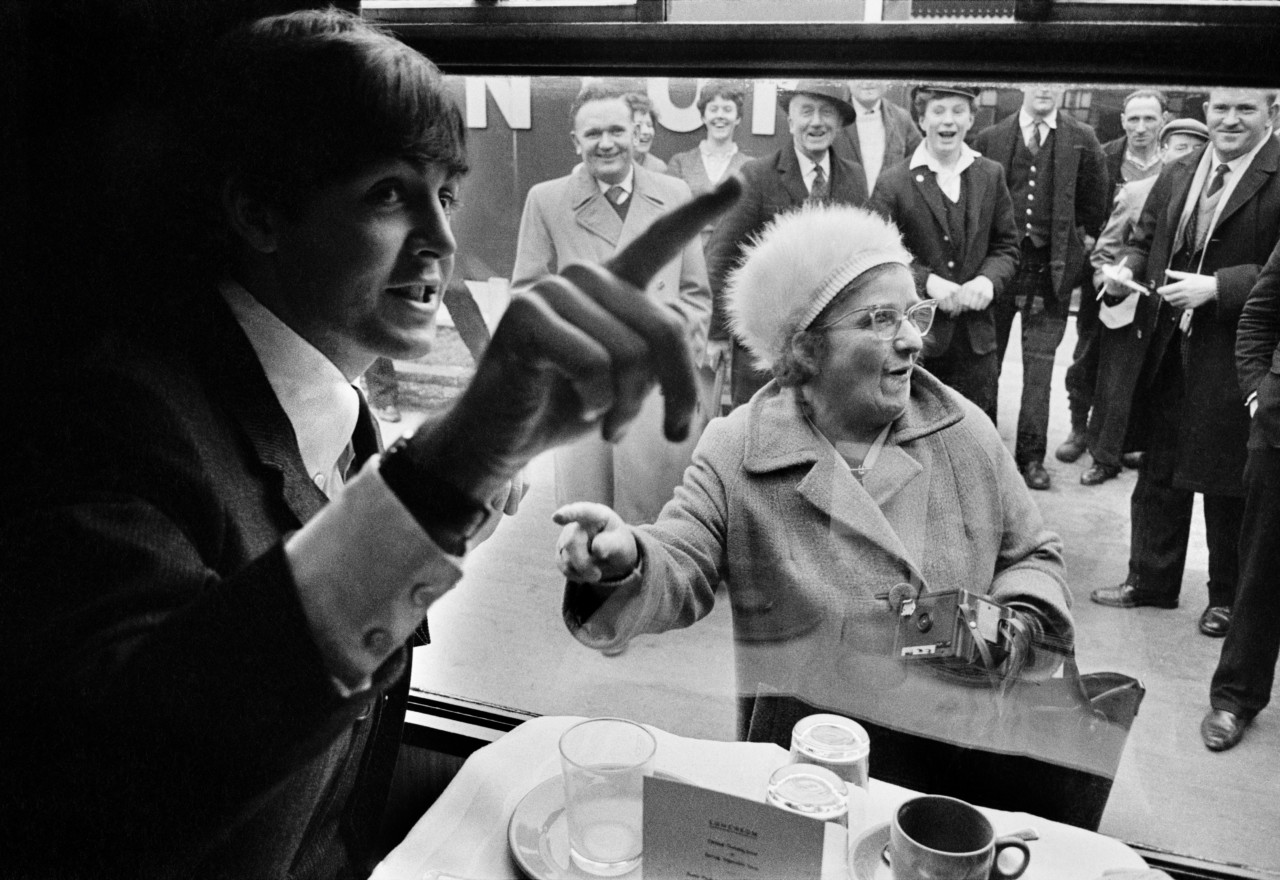 "The Beatles couldn’t go anywhere. A couple of times they were in my car and the police would have to just wave us through a red light because they knew if the car stopped it’d be totally mobbed" 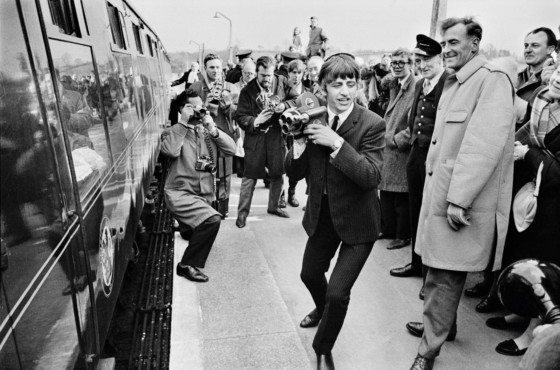 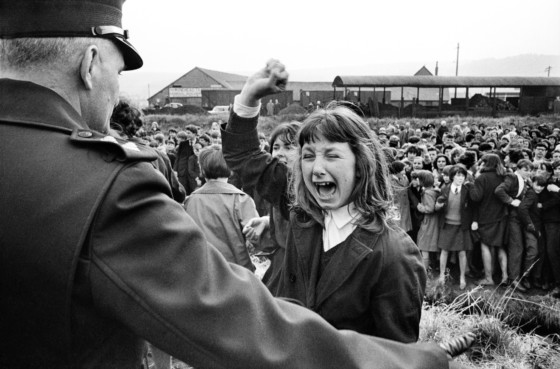 David Hurn The Beatles during filming of 'A Hard Days Night'. Police restrain fans who line the railway bank in the hope of seeing the Beatles as their train passes through on the daily trip, during the filmi (...)
ng of 'Hard Days Night'. London. England. G.B. 1964. © David Hurn | Magnum Photos 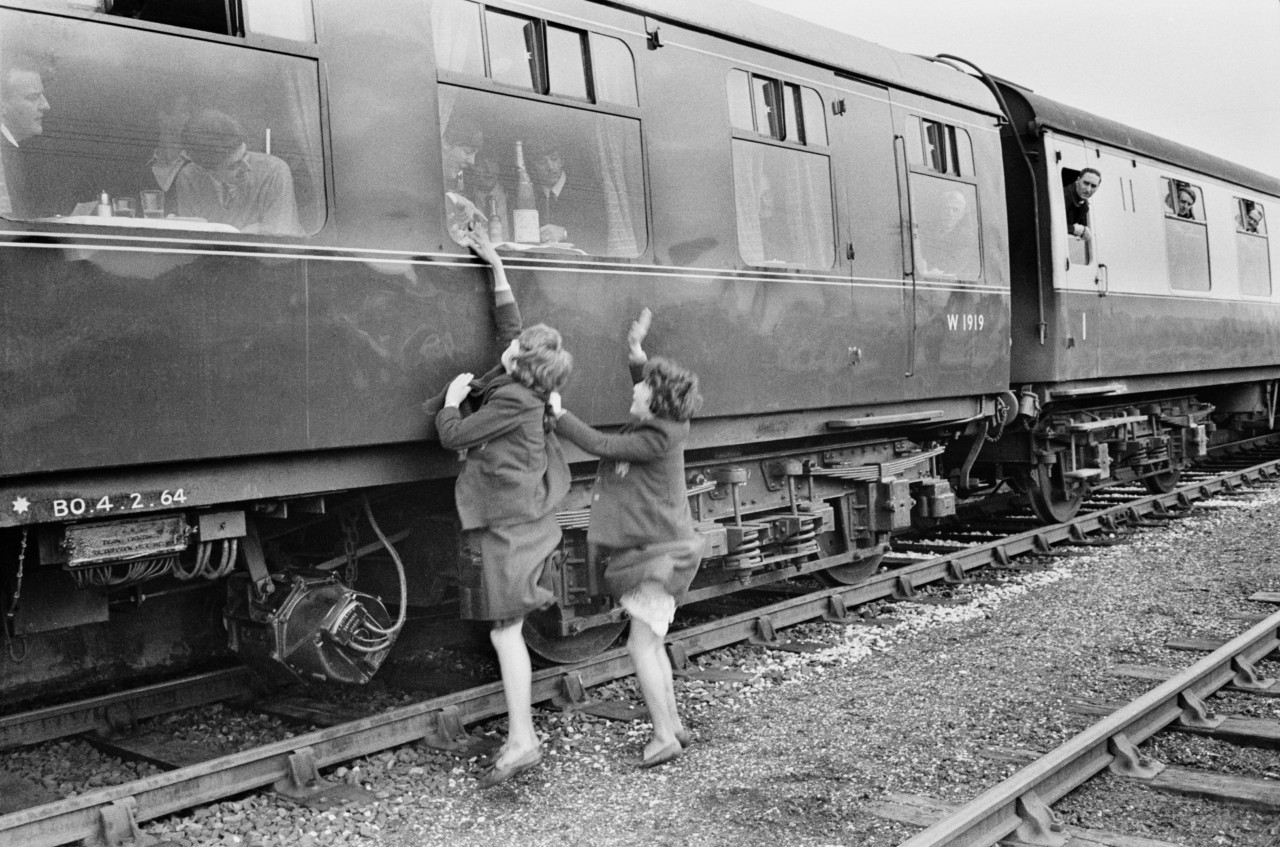 David Hurn The Beatles during filming of 'A Hard Days Night', produced by Richard Lester. Fan trying to get near the train. London. England. G.B. 1964. © David Hurn | Magnum Photos

“They’re the biggest band that has ever been and I suspect they had the most ludicrously fanatical fans ever too,” Hurn says. “The Beatles couldn’t go anywhere. A couple of times they were in my car and the police would have to just wave us through a red light because they knew if the car stopped it’d be totally mobbed. The effect it has on four young guys must have been enormous, and it must raise all sorts of things that none of us know about.”

Hurn also recalls the cramped conditions on set, unavoidable given the locomotive setting: “The film was shot in near sequential order – very rare – shooting began on 2 March 1964. Most of the shooting was done on an actual travelling train leaving daily from Marylebone Station and traveling to Minehead in Somerset. It meant space was very confined – sometimes in a small carriage, there had to be the four Beatles, the director, the lighting cameraman, and of course at that time a large cinematic camera. I was considered an annoyance.” Hurn got to know the band well in their peculiar incarceration. Sequestered away from the hordes of screaming fans, the four – and their entourage – were forced to resort to somewhat mundane pursuits: “One of the things we used to do was play Monopoly together,” recalls Hurn. “One of my regrets is that there are no pictures of us playing, and the reason for that is that I was so competitive I didn’t think to get up and take a photograph!” 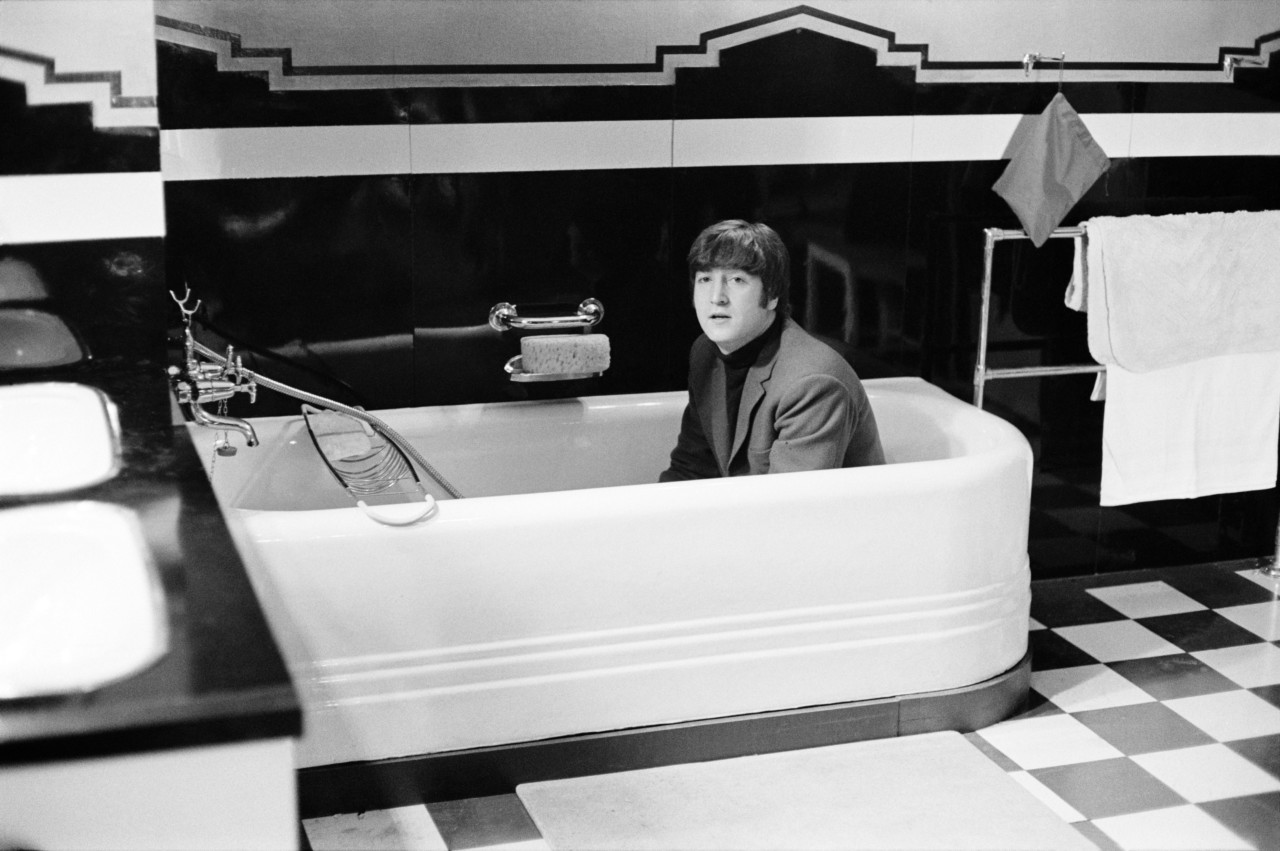 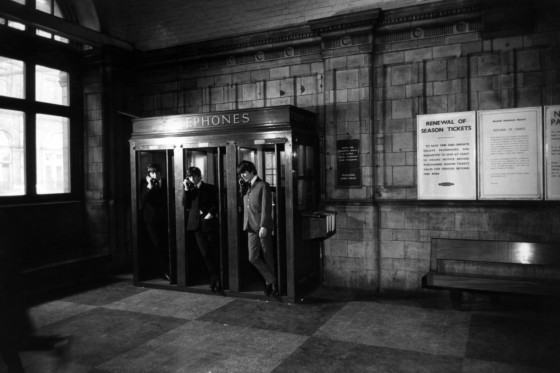 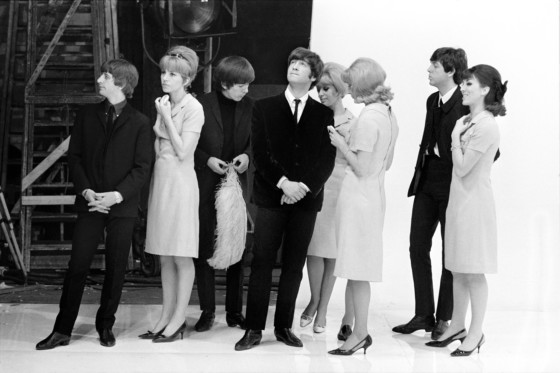 "Hurn’s pictures, along with Lester’s film, are perhaps the best documents of Beatlemania, conveying the viewer to the time when the band regularly hid in hotel rooms, stuck on the never-ending rollercoaster ride of stardom." 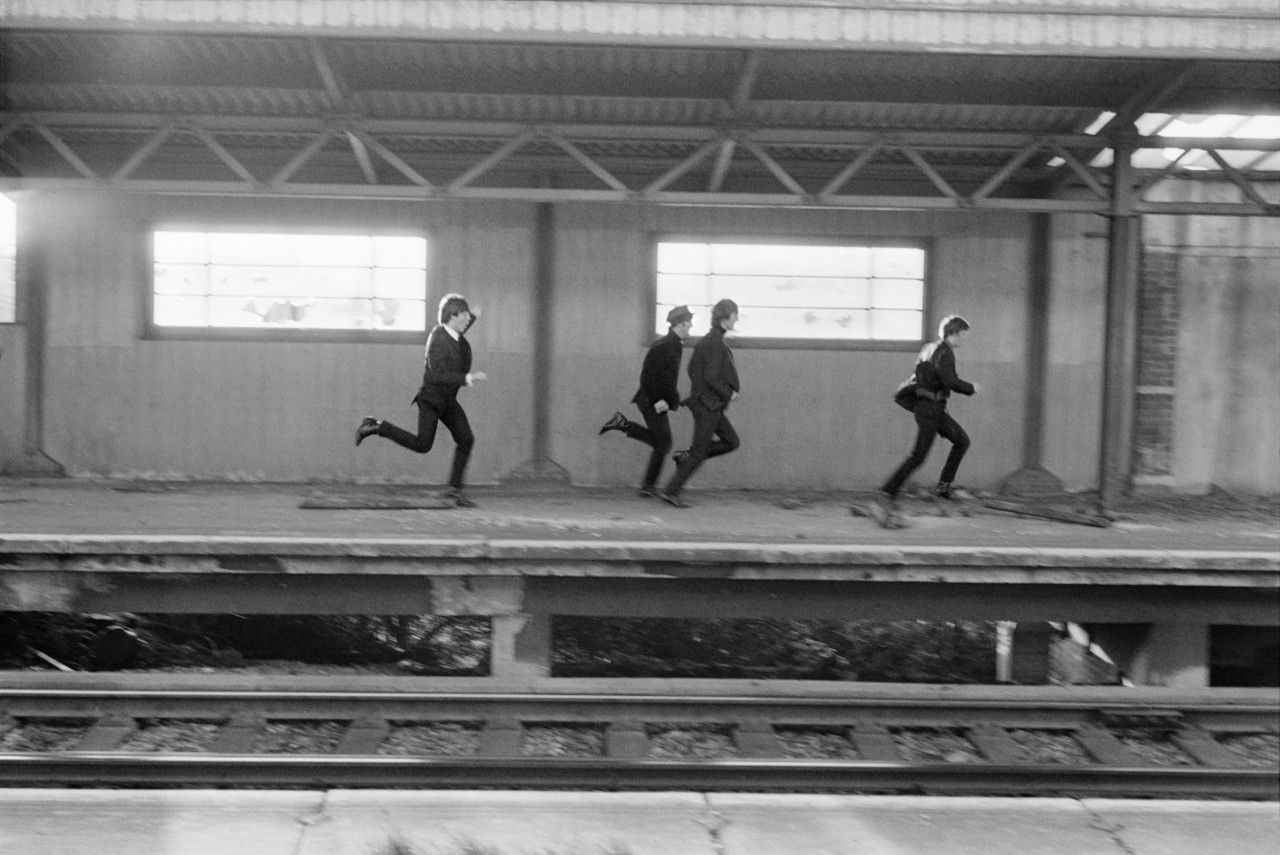 Lester employed a fast-paced documentary style, capturing the frenzied energy of Swinging London in all its glory. The film was low budget for the time (£200,000), with the studio concerned more about the soundtrack and capitalizing on the latest teen music trend. With the movie, their main concern was those thick Liverpudlian accents. An executive at United Artists reportedly wanted Lester to overdub the voices with clean mid-Atlantic accents. McCartney apparently shot back: “Look, if we can understand a fucking cowboy talking Texan, they can understand us talking Liverpool.”

Hurn’s pictures, along with Lester’s film, are perhaps the best documents of Beatlemania, conveying the viewer to the time when the band regularly hid in hotel rooms, stuck on the never-ending rollercoaster ride of stardom. The photos capture the group goofing around with the director and getting down to business with George Martin at Abbey Road Studio. 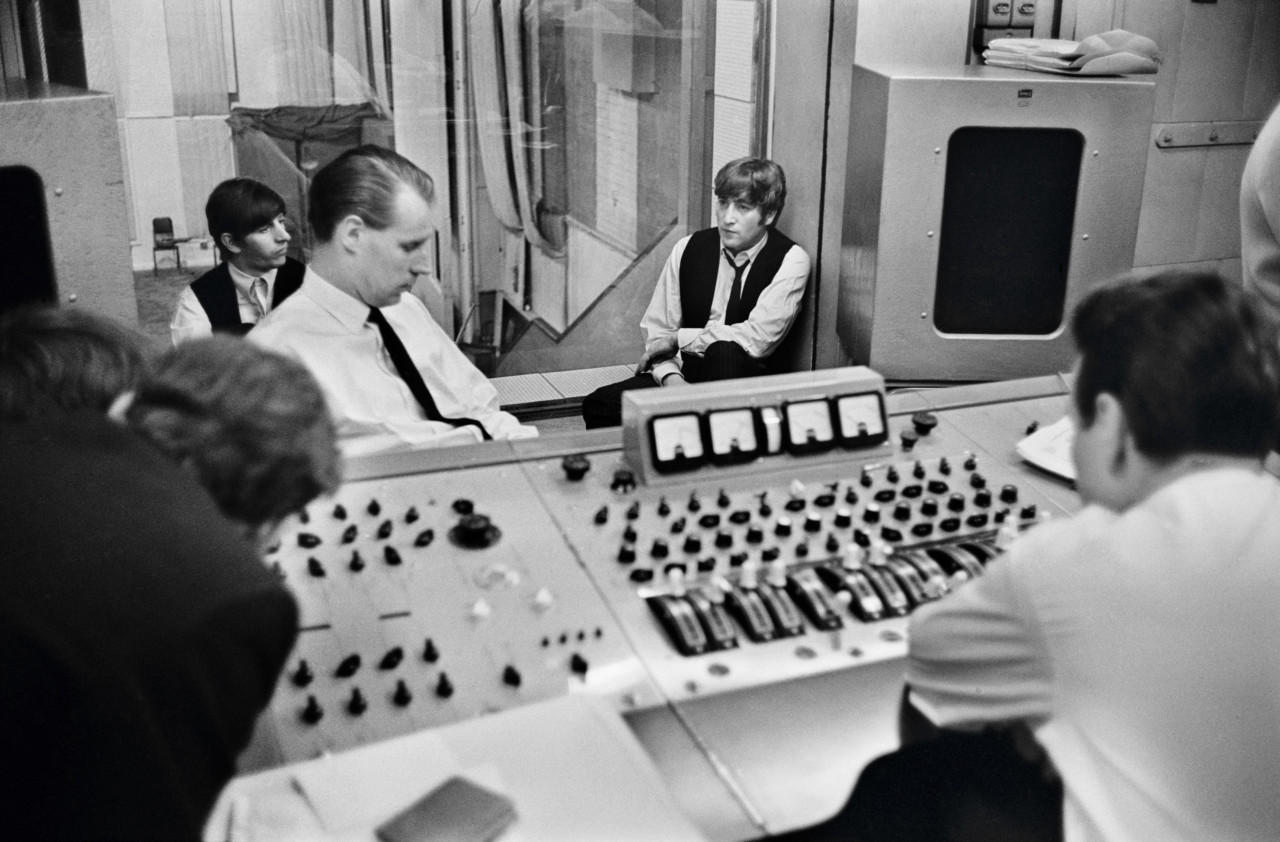 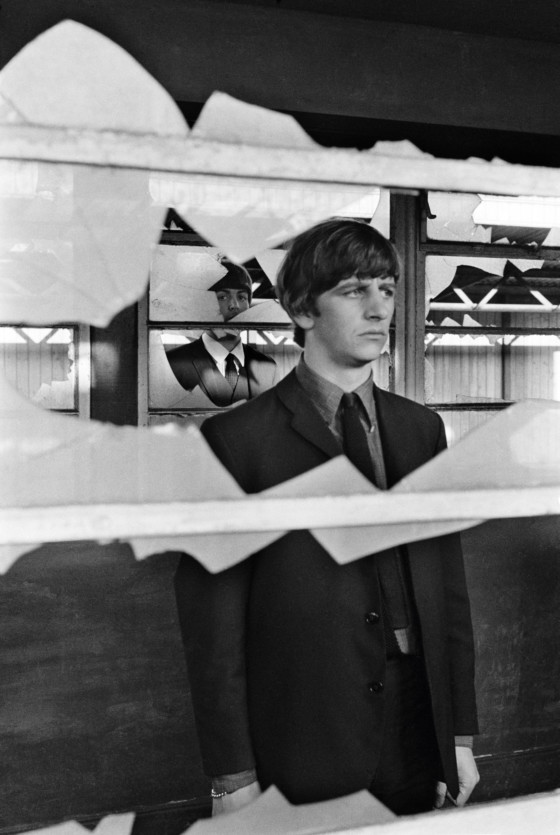 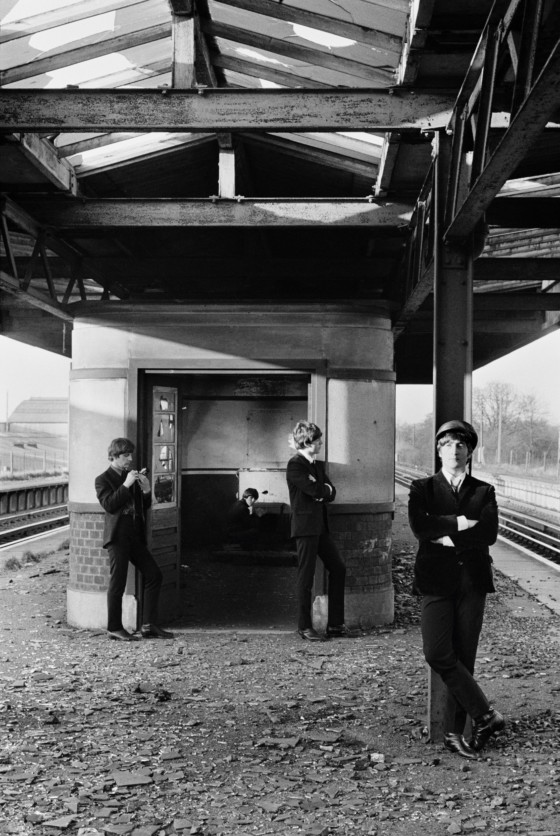 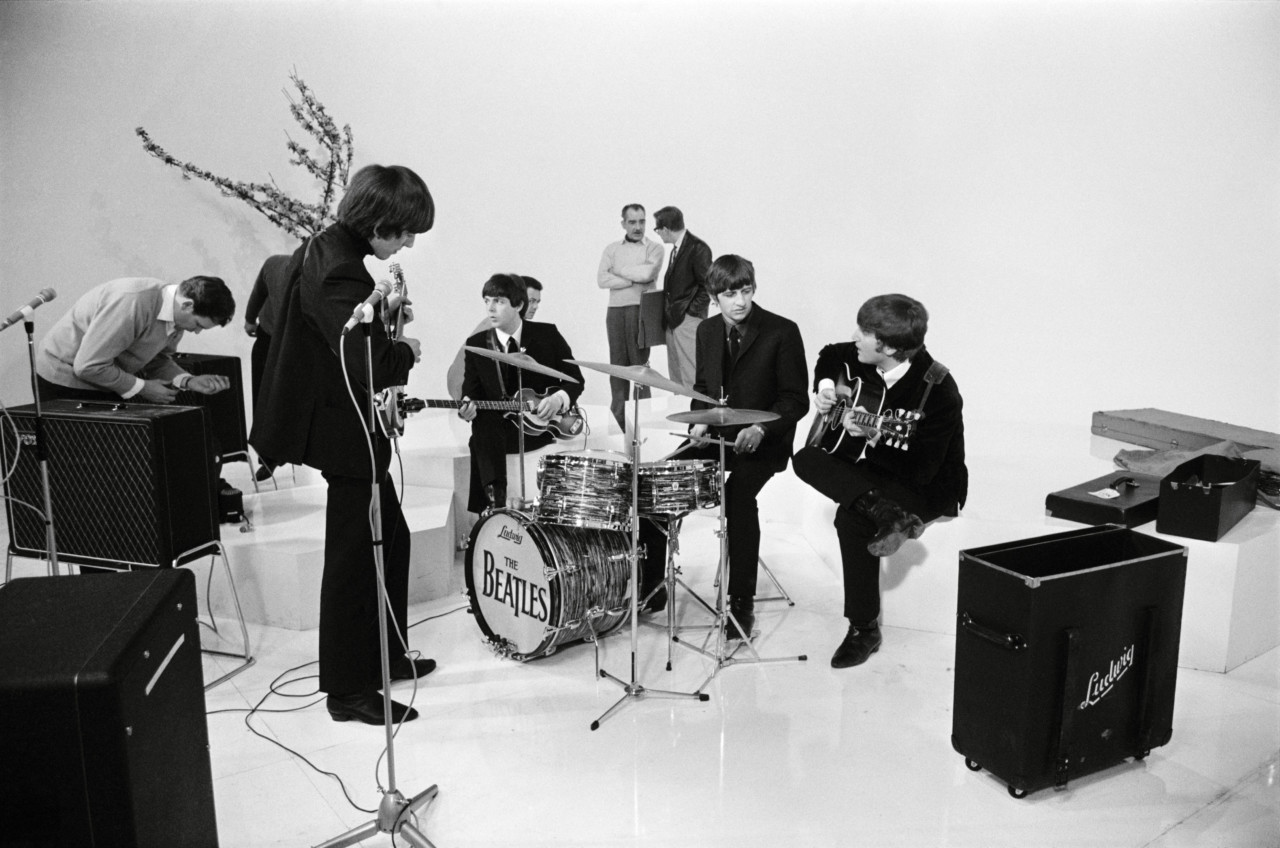 The film was the first of a kind, and with its innovative techniques of cutting scenes to the rhythm of the soundtrack, it signposted the dawn of music videos. For those reasons and more, the BFI ranked it 88th in its rundown of the greatest British films of the 20th century. The Village Voice hailed it “the Citizen Kane of jukebox musicals”. The following year, Lester went on to direct the Fab Four again in the equally successful Help!

“Sometimes people don’t realize the magnitude of their own achievements,” reflects Hurn.“They are clueless to the boundaries they have already crossed to get where they are. My picture shows the four members studying pages of the script for the following days of the film’s shooting. It takes place in the Abbey Road Studio, the scene of so many of their musical triumphs. I cannot help but wonder if they were thinking of their futures. The Beatles gave their last concert only two years after this film was released.” 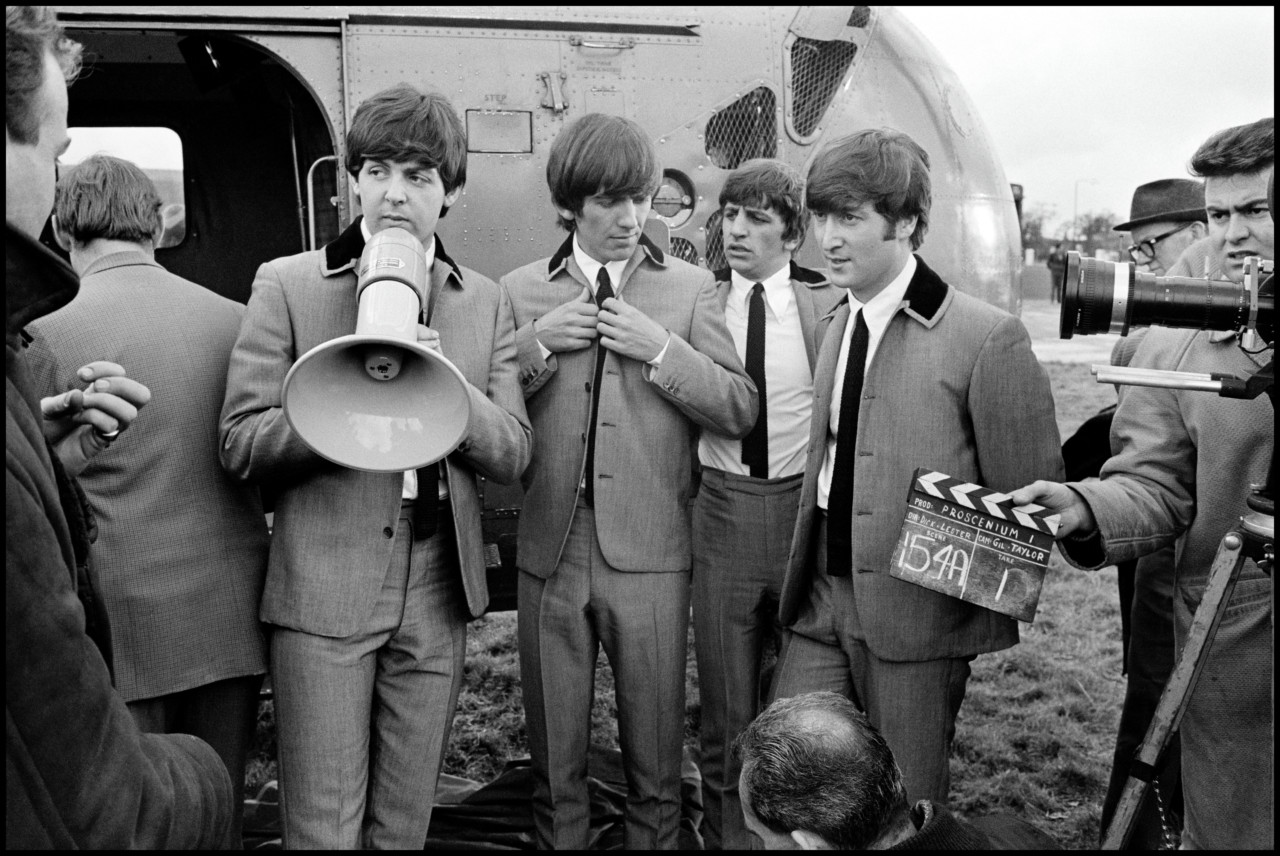