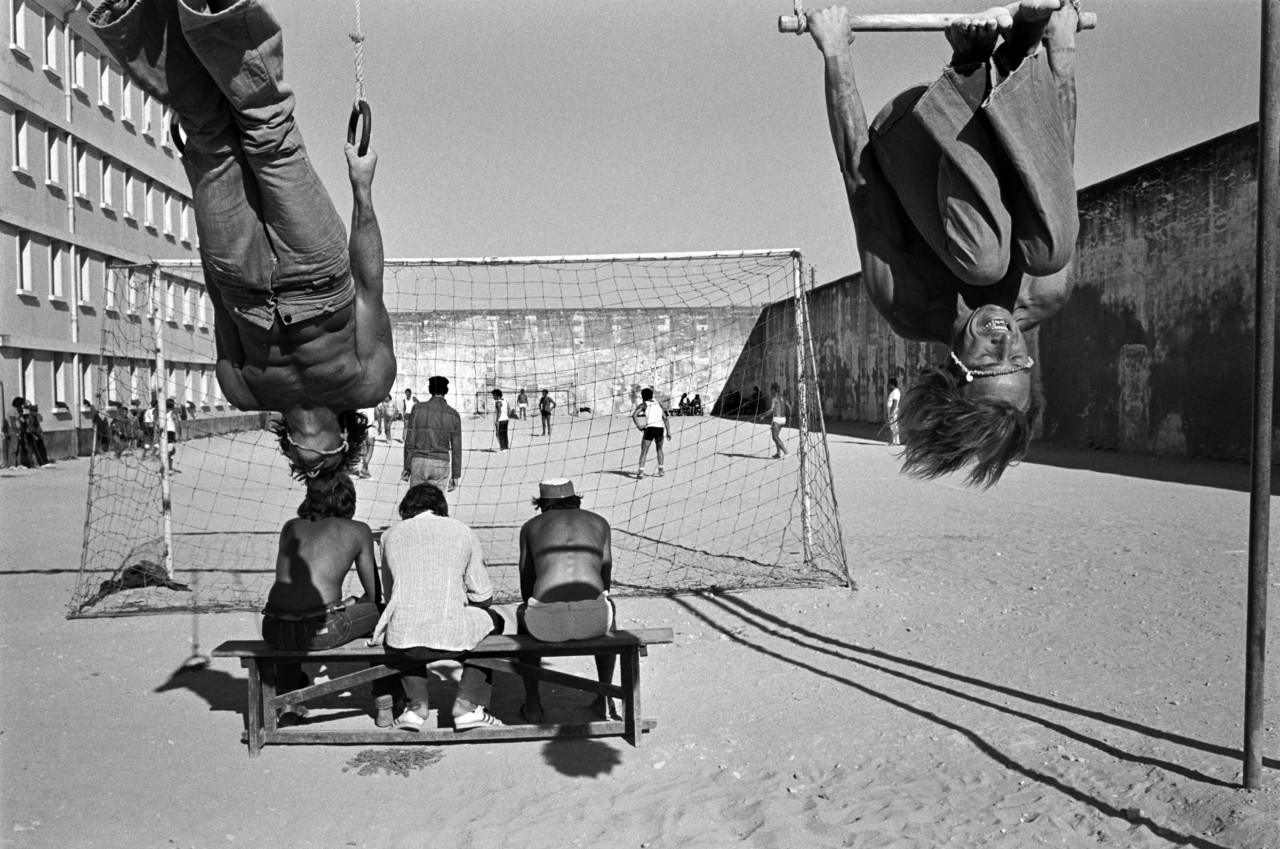 Both living and woking in Lagos, 2017 LensCulture and Magnum Photography competition Judge, Azu Nwagbogu is the founder and director of the African Artists’ Foundation (AAF), a non-profit organisation based in Lagos, Nigeria that is dedicated to the promotion and development of contemporary African arts and artists. The collector and curator is also the founder of numerous other projects supporting and celebrating African arts and phography, including the National Art Competition, LagosPhoto Festival and Art Base Africa, which is a new virtual space to discover and learn about contemporary African Art and diaspora.

As the 2017 LensCulture and Magnum Photography Awards opened, Magnum spoke to Nwagbogu about contemporary photography in Africa, how the digital space is changing things, and about what, as a judge, catches his eye. His words are also presented here with his curations of Magnum images, inspired by “motion and stillness,” which he says “are the great contradictions within photography.” Jean Gaumy “I have selected this image because it’s about youth, calmness and the future in Chernobyl, Ukraine, a region that faces an uncertain and precarious future.” - Azu Nwagbogu. A village in an area of (...)
very low contamination that the Chernobyl Development and Recovery Programme, initiated by the United Nations, is investing in so as to keep the village alive. Activity at the youth centre. The effects of the accident at Chernobyl is a potential timebomb for the future generations. Serious questions about the consequences on the genetical patrimony need to be asked constantly and added to the general debate. Luhyny, Ukraine. May-June 2008. © Jean Gaumy | Magnum Photos
License | 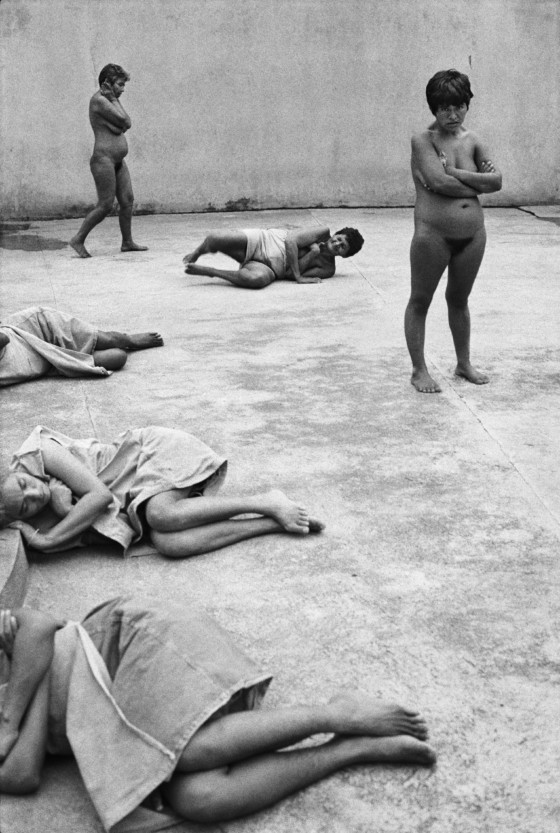 Jean Gaumy “A capture that transmits so much empathy. Reminds me of a Goya etching and brings to focus the hidden casualties of war—the mental health impact on mothers and women in general.“ - Azu Nwagbogu. A (...)
uthorities claim that 12 million Salvadorians are now suffering from psychological troubles resulting from stress suffered during the war. Psychiatric asylum. Town of Soyapango, Salvador. 1985. © Jean Gaumy | Magnum Photos
License |

What were the key cornerstones of your career that led you to where you are today?
I am actually a scientist by academic training and I’ve come to photography and curating through an elaborate and convoluted manner. I suppose the key things were curiosity, passion, a studied analytic approach and finally the good fortune to be inspired by my elder siblings and parents who really opened my mind to the possibilities inherent in artistic and creative expression.

I once worked in phase two-drug research and developed an attention to detail that has served me well as an artistic director and curator. Ever so often I am invited to teach curating and my approach has always been to encourage the students to bring all that makes you unique in developing a curatorial approach whilst learning all you can about the language and landscape of the world of communication in art, museum or photojournalism. 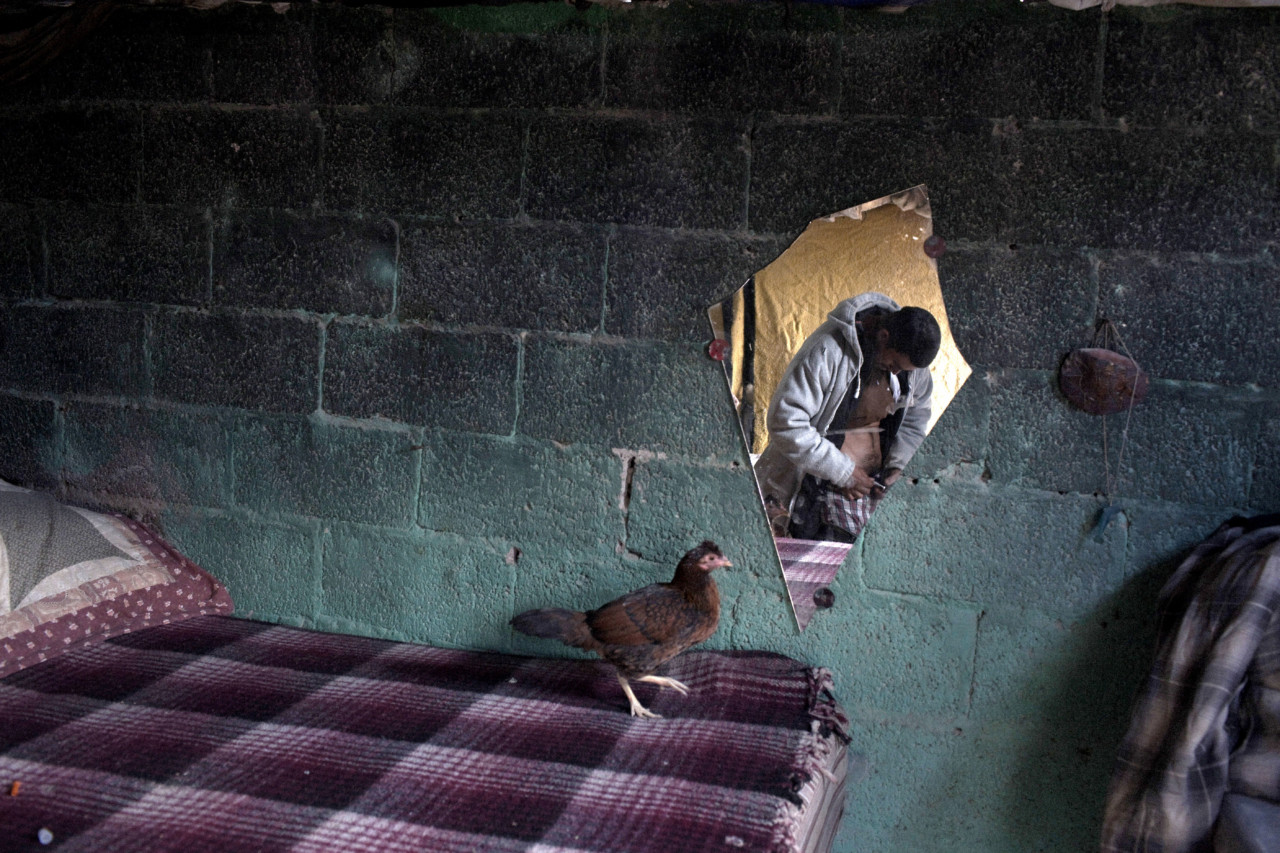 "Frankly, talent is not enough, we must nurture talent and through the festival we have been able to do so through workshops, residency programs, mentorships and such like"

You founded the African Artists’ Foundation, what does it do and why did you feel it was important to bring into existence?
African Artists Foundation (AAF) was set up ten years ago to provide a platform for artists working in and from Africa and diaspora to get necessary support to develop and nurture their practice while using art as a tool for social change. AAF has a clear interventionist approach with all of our activities. We believe that art has the capacity to inspire and create societal change. We believe that culture is the catalyst for growth and advancement of any society and we are set up to allow African talent flourish and contribute to our evolving culture. At AAF our approach is always founded on research, knowledge, learning — if you like, we adopt the principle of: first do no harm. Africa used to be is an open playground for experimental medical scientific research and the photography world is similar, all sorts of ideas are tested and several photographers with varying morals come to Africa to make a name for themselves and to tell the African story. At AAF we encourage collaboration but the right sort. All of our projects are first thoroughly researched to address a need and then we ensure that each program is sustainable. It is the same for the National Art Competition which is in its tenth year this year, LagosPhoto Festival in its 8th year and women artists program and Youth Empowerment through Contemporary Art and so forth. We are aware of the risk and problems inherent in stirring up creativity but not being around long enough to help nurture and guide this energy. 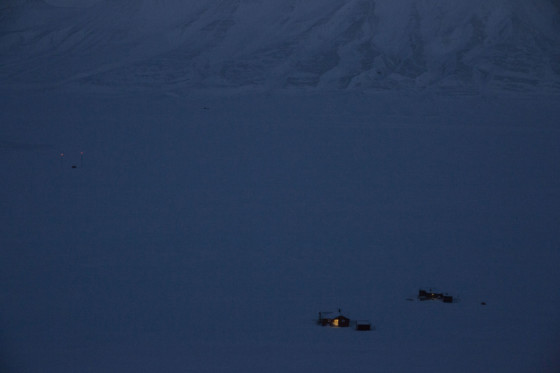 Bieke Depoorter “An image that has so much information with so little to see. Bieke Depoorter’s approach in getting really close to her subjects and stories is somewhat at odds in this capture but very fitting in (...)
bringing the story of tourism in freezing Spitsbergen, Norway. “ - Azu Nwagbogu. Longyearbyen is the administrative centre of Spitsbergen. Spitsbergen is the largest and only permanently populated Island of the Svalbard archipelago in northern Norway. Situated north of mainland Europe, Svalbard is about midway between continental Norway and the North Pole. Svalbard is the northernmost settlement in the world with a permanent civilian population, which are not only researchers. The islands were first taken into use as a whaling base in the 17th and 18th centuries, after which they were abandoned. Coal mining started at the beginning of the 20th century, and several permanent communities were established. Now tourism is on the rise. Longyearbyen, Svalbard, Norway. January 2017. © Bieke Depoorter | Magnum Photos
License | Larry Towell “A very clever image that reminds us of the displaced Native Indians who are fighting today for their land like their ancestors gone before.” - Azu Nwagbogu. Sacred Stone Camp with photo from Oceti (...)
Camp in 2016. Standing Rock, North Dakota,USA. Feburary 24th, 2017. © Larry Towell | Magnum Photos
License | Martin Parr “This is an image that could be read or interpreted in so many ways but essentially for me it’s about the irony of group tourism. In trying to understand a place you visit but then not mingling wit (...)
h the people to understand. “ - Azu Nwagbogu. Revolution Sq., Santiago, Cuba. 2017. © Martin Parr | Magnum Photos
License | 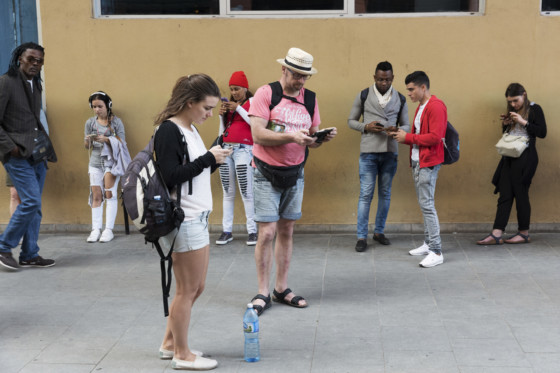 How would you describe the African photography market?
In one word and taking the continent as a whole: inchoate. Having said that, there are a few essential observations to note: the first is that photography is a rapidly growing sector in the global market and the fastest growing medium in the creative industry on the continent. Secondly, beyond the boorish barometer of gauging growth by buying and selling offered through galleries and in art fairs, the photography market goes beyond this indelicate assessment and is thriving because the fact is: photography illuminates every aspect of society and photographers are finding that they are in demand in contemporary society.

What is the role of the Lagos Photo Festival and how do you go about finding and nurturing new talent to feature?
LagosPhoto Festival’s principal aim is to build a community for contemporary photographers working in Africa to share the African story. It is essential that it is inclusive of all those who have embraced what we call the African sensibility. It is an opportunity to tell the stories of the continent in a way that allows us to identify with the complex realities and beauty of life on the continent. It is singular because it is truly inclusive and irreverential. We are beholden to no-one and have the opportunity to present stories of contemporary Africa in a way that allows emotional truths, facts, understanding and engagement. Finding talent is through a multi-pronged approach. I have found that traveling the continent and meeting the photographers directly is the best way to discover talent. You would be surprised to find that so many talented photographers especially in Africa have very low visibility on the internet through websites or social media platforms. I have also observed that even fewer enter photography contests that could possibly change their lives. Frankly, talent is not enough, we must nurture talent and through the festival we have been able to do so through workshops, residency programs, mentorships and such like. 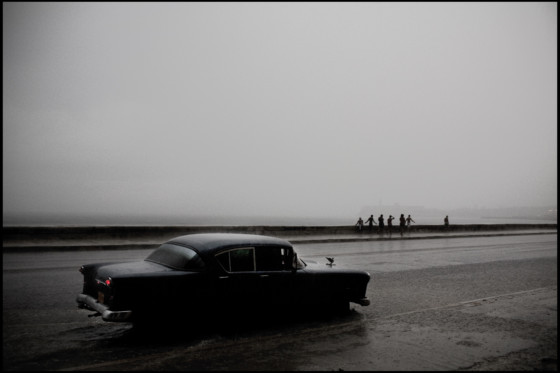 Jérôme Sessini “A beautiful image of a car in Cuba. The image transmits a sense foreboding.” - Azu Nwagbogu. For almost 50 years the Republic of Cuba was led by Fidel Castro, starting when he took position as the (...)
head of the revolutionary army on January 1, 1959. The "Lider Maximo" passed the power on to his brother Raul Castro last February. Fidel's recent withdrawal from politics does not give any indication of change in the nature of relations between Cuba and the USA. Yet the entire Cuban population is in expectation - among whom those who experienced the Cuban revolution as well as the younger generation, more critical of Fidel's "Socialist Paradise". The Malecon, Havana, Cuba. June 17, 2008. © Jérôme Sessini | Magnum Photos
License | 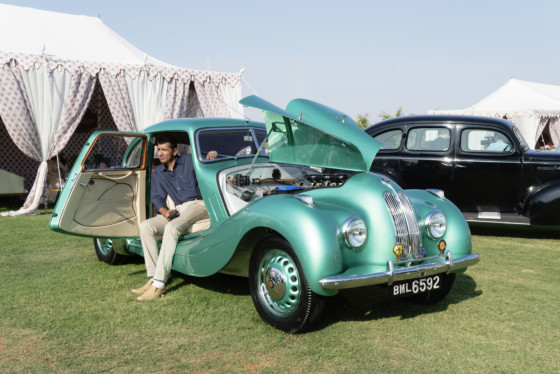 Sohrab Hura “Decolonisation aesthetics is a topic of personal interest. Image and identity are often represented through objects. These cars not to be driven but as status symbols.” - Azu Nwagbogu. Amit Sapre (...)
sitting in his 1949 400 Bristol. It is the only car of its kind in Asia. Hyderabad, India. 2017. © Sohrab Hura | Magnum Photos
License |

How is the digital space changing photography, particularly with regards to your project, Art Base Africa?
I love the possibilities that the digital space offers the photo industry today. The printed image on the page of a magazine will always be superior in every instance when compared directly with an image on a screen but the trade-off is the immediacy and speed of sharing the digital image, this is particularly powerful. Photography finds balance on a three-legged stool: image, caption, publish. The digital platform such as Instagram ensures that you have all three. In the past you might have image and caption but publishing would be a problem. Art Base Africa is an online platform we have developed to provide the necessary intellectual architecture that is required to sustain the growing contemporary art scene as relates to work about and from the African continent and diaspora. It is the missing link. The artists are there, thriving. The scene is growing but what is missing is the essential critical discourse to situated and appraise the work being produced. 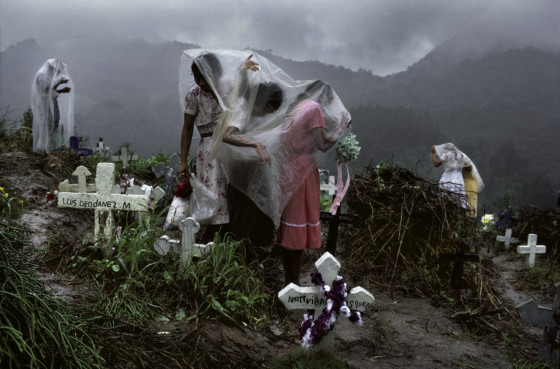 When you’re judging what catches your eye, and Is there anything in particular that you look for?
I actually thoroughly enjoy serving as a juror for photography contests, it suits my intellectual curiosity and I enjoy engaging my colleagues and listening to them while judging. Listening is key. The first thing, is to always remember what it is your judging. Simple as it sounds it is essential to keep the task in mind always. It could be a contest for photojournalists therefore in this case the image is just as important as the accompanying caption that informs on who, what, where why, when. You’d be amazed how easy it is to forget this fact. On the other-hand with an art photography contest all the W’s are less essential. In general I look for work that is considered, coherent and illuminating. I particularly look for work that expands the scope of the medium of photography. 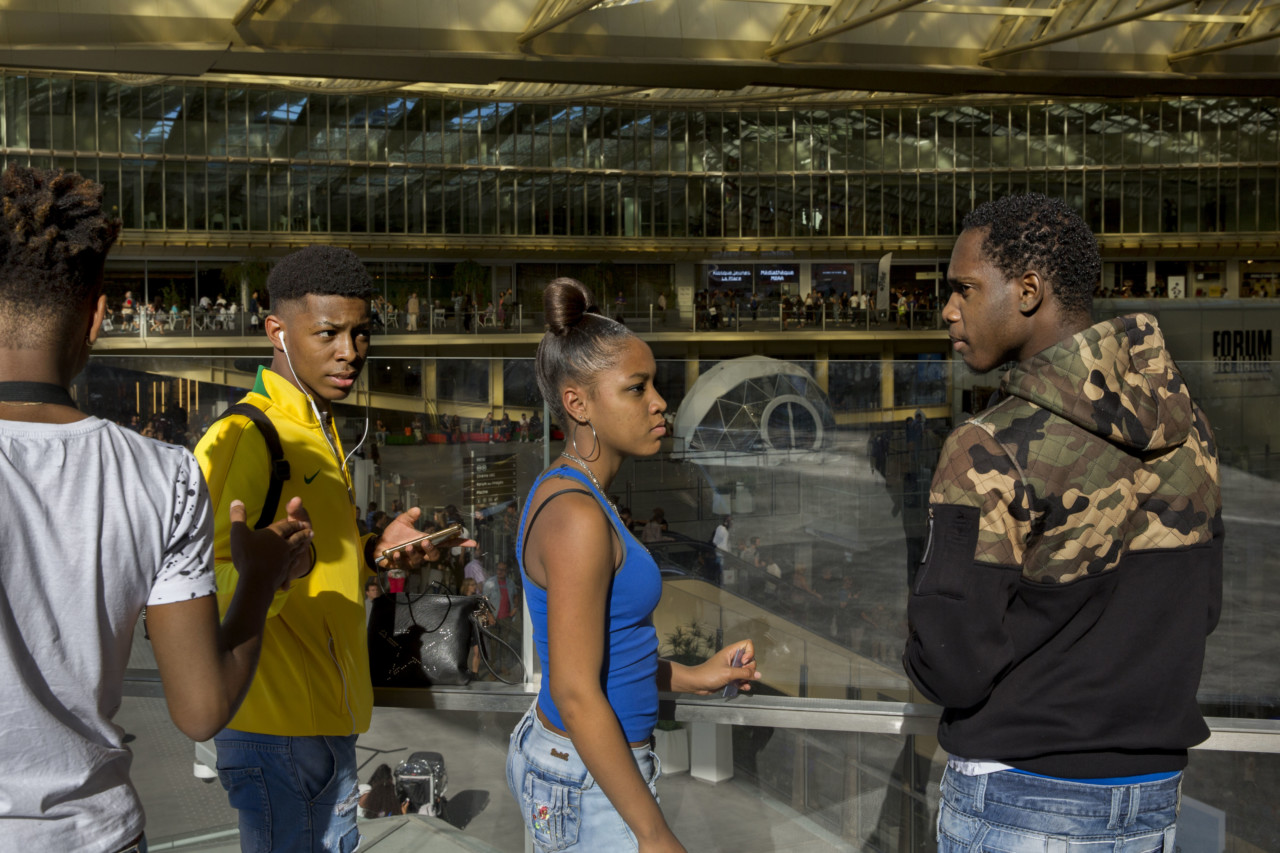 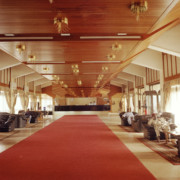