Moises Saman visits the site of the 2011 disaster in Japan, exploring what happens when human presence no longer affects the landscape Moises Saman A house covered in wild vegetation overgrowth in the town of Tomioka, Fukushima Prefecture. Tomioka was severely affected by the Fukushima Daiichi nuclear disaster, and the 2011 Tohoku earthquake a (...)
nd tsunami on March 11, 2011. As well as sustaining considerable damage from the earthquake, and the tsunami (which devastated the coastal area), the town was evacuated en masse on the morning of March 12, 2011. On March 25, 2013, the nuclear evacuation zone in Tomioka was lifted by the central government, and the town was re-zoned into three areas according to different levels of radiation. However, the town government elected to keep the evacuation in place for at least another four years because of the need to rebuild damaged infrastructure. In the zone with the highest radiation levels, residents will not be allowed to return home for at least five years. People other than registered residents are banned from entering. This zone, which covers the northeastern part of the town, had about 4,500 residents. The central part of the town, which used to have 10,000 residents was designated as a restriction zone, in which the residents could return during daytime hours but have to leave at night. The remaining zone, which mainly covers southern Tomioka had about 1,500 residents, and remaining restrictions are expected to be lifted. Tomioka, Fukushima Prefecture. June 6, 2017. © Moises Saman | Magnum Photos
License |

Some places become synonymous with tragedy, with catastrophe: Hiroshima, Chernobyl,  Flint, Aleppo. On March 11, 2011, Fukushima joined that list. After a 9.0 magnitude earthquake struck Japan, the worst in its history, the nuclear reactors on the Fukushima Daiichi nuclear power plant automatically shut down. A tsunami soon followed, with waves up to 40 meters high; in Fukushima prefecture in northeastern Japan, it disabled the emergency generators intended to provide power to cool those nuclear reactors.

Inadequate cooling led to three nuclear meltdowns. The plant spewed radioactive material for four days, as around 300,000 people fled the surrounding area. Most have never returned. A further 1,600 deaths were attributed to the subsequent evacuation conditions while more than 600 people are expected to die from cancer because of exposure to radiation during the aftermath of the incident. 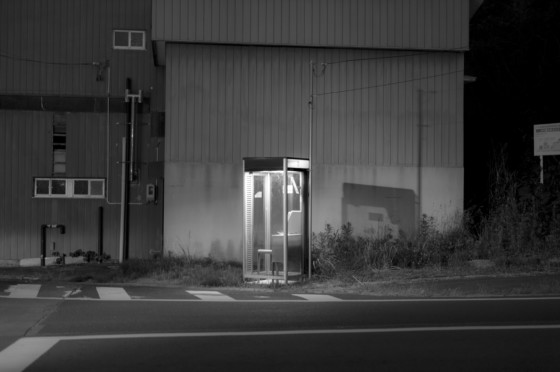 At the time, photographer Moises Saman wasn’t there — he was photographing the Arab Spring and following the story of Fukushima from a distance. But after moving to Japan in 2016 with his wife, he began wondering what a nuclear disaster would look like, even seven years after the fact. “It was pure curiosity on my part, a desire to see what the area looked like and to understand how a catastrophe of these proportions changes people’s lives,” he says.

Saman has become more interested in the moving image over the past year. For him, Fukushima also provided an opportunity to capture scenes reminiscent of movies where ancient civilizations are unearthed, like Planet of the Apes, and to present visions of a post-apocalyptic city as in 28 Days Later. “In the exclusion zone, everything is still. There are no people, no movement, everything has been frozen in time. I wanted to bring this stillness alive and make it relevant to the present as it exists today,” he says. “This is why I was inclined to shoot film.” For the film, he collaborated with an old friend, the New York-based photographer Jehad Nga. 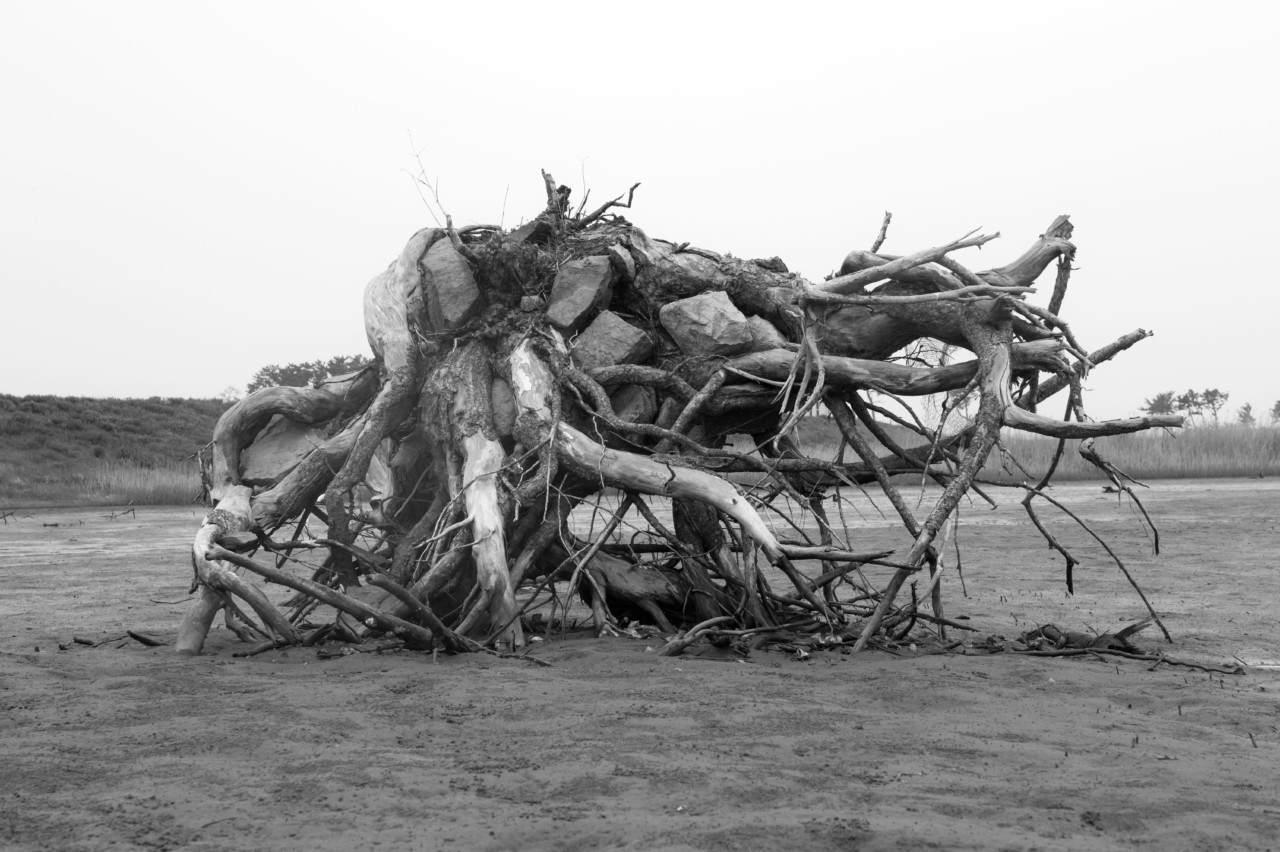 "Who really has the upper hand — is it man or is it nature?
" 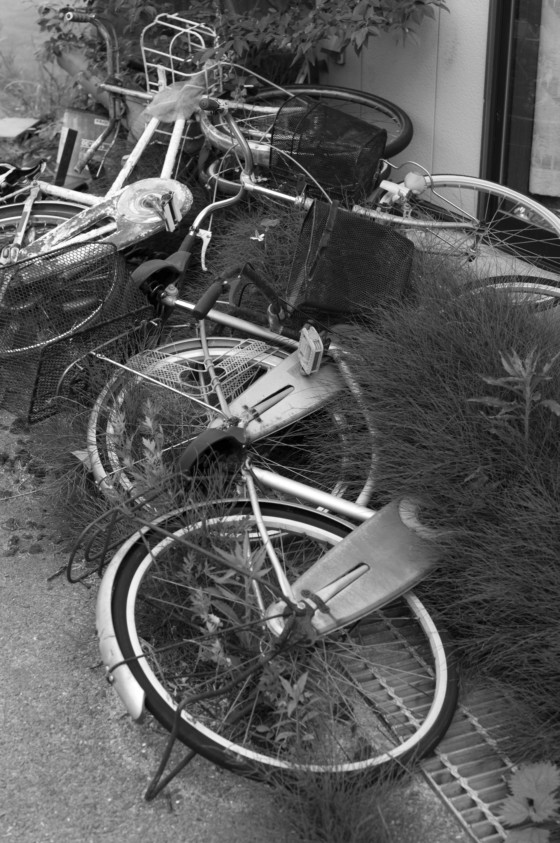 Yet the emptiness of the city hardly compared to the overwhelming solitariness of the exclusion zones, which have been left untouched for seven years. “The nature has grown at its own pace, taking over buildings and growing around cars — basically engulfing any obstacle,” he says. It made Saman consider “what happens when human presence ceases to affect the landscape” — something that was particularly moving now that he lives in Tokyo, where it’s difficult to really see the role nature plays in a city. "Until you actually see it with your own eyes, it’s really hard to translate the magnitude of this event.
" 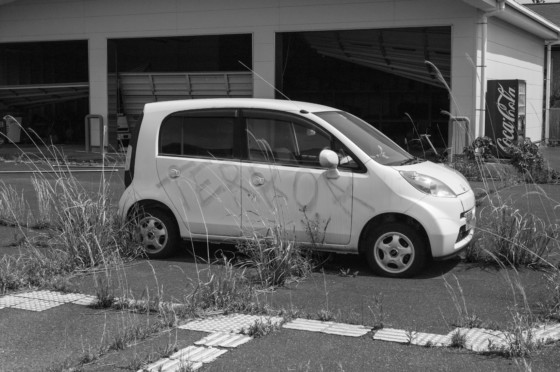 Moises Saman Graffiti written on an abandoned car in the parking lot of a nursing home in the town of Okuma, in Fukushima Prefecture. Parts of Okuma remain in the "exclusion zone" and off-limits for residents t (...)
o return six years after the 2011 Tohoku earthquake and tsunami occurred. The earthquake and tsunami caused severe damage to Okuma, especially devastating coastal areas. The tsunami hit and flooded the Fukushima Daiichi Nuclear Power Plant, located on the Pacific coast of Okuma, and set off the Fukushima Daiichi nuclear disaster. By the following morning, the Japanese government had ordered residents to evacuate to outside of a 10 km radius of the power plant. Okuma, Fukushima Prefecture, Japan. May 23, 2017. © Moises Saman | Magnum Photos
License | 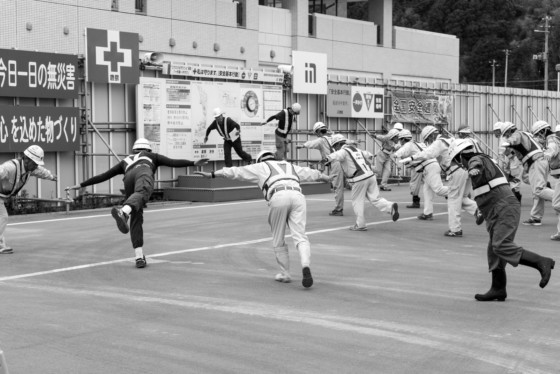 Moises Saman Workers involved in the reconstruction efforts along the Fukushima Prefecture coast, in the aftermath of the 2011 tsunami and nuclear disaster, perform group physical and safety exercises before th (...)
e start of their work day. Tomioka was severely affected by the Fukushima Daiichi nuclear disaster. Besides sustaining considerable damage from the earthquake, and the tsunami (which devastated the coastal area), the town was evacuated en masse on the morning of March 12 as it is located well within the 20 kilometer exclusion radius around the damaged Fukushima Daiichi nuclear power plant. Tomioka, Fukushima Prefecture, Japan. June 7, 2017. © Moises Saman | Magnum Photos
License |

We kept finding animals taking over these villages; snakes in the middle of the road everywhere,” he says. “Things like this really made me reflect on the cycles of life. Who really has the upper hand — is it man or is it nature?”

Saman spent five days in Fukushima and on three of those days, he was able to enter the exclusion zones for six or seven hours — wearing a protective suit and mask. It remains a very controlled zone and Saman needed a lot of paperwork to get in.

“It’s still quite dangerous to spend much time around there because the levels of radiation are high enough that the government doesn’t allow people to return.” There are no plans to allow people to return to some of the villages closest to the nuclear reactor; even the rubble hasn’t been cleared. Moises Saman A Japanese fighter jet flies low over a shrine and memorial for the citizens that died in the 2011 tsunami. The city of Ishinomaki that was one of the hardest hit during the 2011 tsunami. As of Jun (...)
e 17 2011, a total of 3,097 deaths had been confirmed in Ishinomaki due to the tsunami, with 2,770 still missing. Approximately 29,000 city residents lost their homes. Ishinomaki, Miyagi Prefecture, Japan. May 24, 2017. © Moises Saman | Magnum Photos
License | 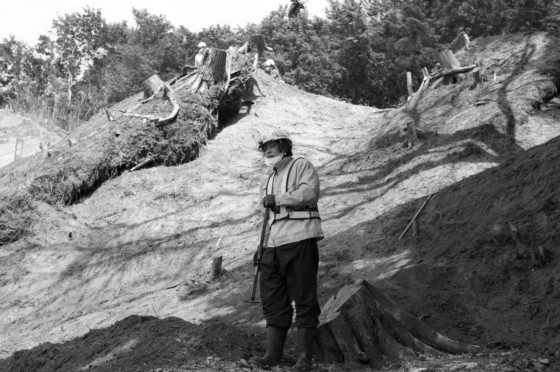 Moises Saman A cleanup crew of workers collect and remove contaminated radioactive soil from the town of Namie, Fukushima Prefecture, six years after the nuclear disaster. Namie was severely affected by the F (...)
ukushima Daiichi nuclear disaster, and parts of the town continue to be off limits to its former residents six years after the accident. Namie, Fukushima Prefecture, Japan. May 22, 2017. © Moises Saman | Magnum Photos
License | Moises Saman A firefighter from the Futaba Fire Department, in Fukushima Prefecture, lies on the ground playing the role of an injured person during a rescue drill at a firehouse in the town of Futaba. Futaba (...)
was severely affected by the Fukushima Daiichi nuclear disaster, and the 2011 Tohoku earthquake and tsunami on March 11, 2011. Besides sustaining considerable damage from the earthquake, and the tsunami (which devastated the coastal area), the town was evacuated en masse on the morning of March 12, 2011, as it is located well within the 20 kilometer exclusion radius around the damaged Fukushima Daiichi nuclear power plant. On April 1, 2017, residents were allowed to return to the town, although a poll indicated over half did not intend to do so. Futaba, Fukushima Prefecture, Japan. June 5, 2017. © Moises Saman | Magnum Photos
License |

The Japanese government have taken the cleanup seriously but it’s not a quick process, particularly since the disaster hit such a densely-populated, industrialized country. It’s estimated to take up to 40 years and in December 2016, the Japanese government nearly doubled its projections for costs related to the Fukushima nuclear disaster to 21.5 trillion yen ($188 billion).

It was an unusual experience for Saman to photograph the aftermath of an event he hadn’t covered at the time. He had seen so many photographs and documentaries that he wasn’t expecting to see anything that he hadn’t seen before — and yet he was struck by the spaces in the exclusion zone that had been left exactly as they were when everyone fled seven years ago.

“Being there and knowing that this radiation is going to linger for hundreds of years, seeing the lives that were up-ended by this event, houses with food still on the table — it’s a powerful thing to see,” he says. “Until you actually see it with your own eyes, it’s really hard to translate the magnitude of this event.” 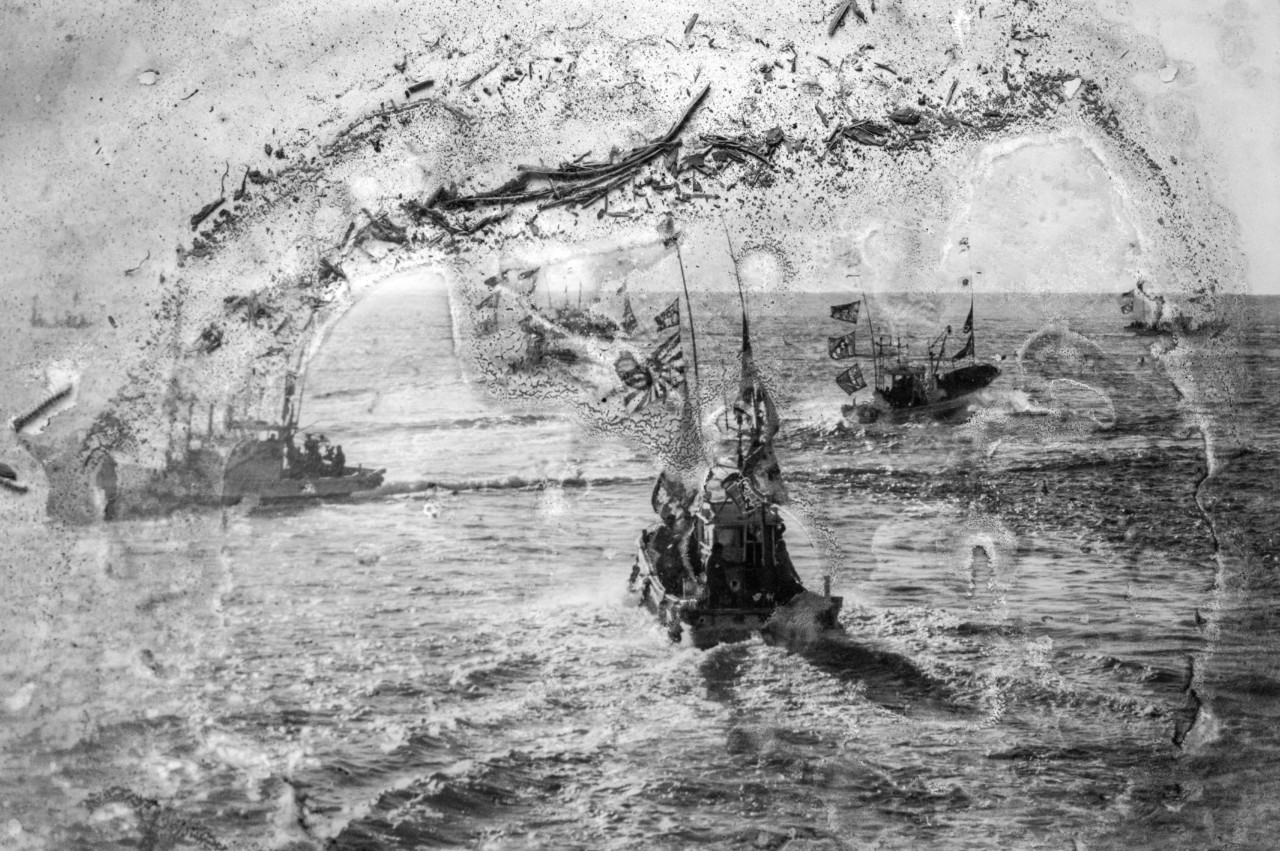 A Window into Brazil’s Past