America’s open roads have inspired countless artists and writers, the expansive landscapes, the empty highways, roadside attractions, pit stops, the passing ghost towns, as significant, if not more so, than the eventual destination. Depicted in legendary texts from the likes of Jack Kerouac, Tom Wolfe, and Hunter S. Thompson, the American road trip in popular culture offers up a chance to understand the alluring freedom of the open road. This summer on Magnum Photos, we explore the American road trips made by Magnum photographers in order to understand why the idea of road tripping across America has captured the imagination of so many. We begin this series with Inge Morath’s solo journey from New York to Reno in 1960.

“This is the story of my first trip across the United States. It is not really a story, they are bits of notes written each night at a table in a motel room that always was a different place and always looked the same,” wrote Inge Morath at the start of her personal diary, packed with poetic musics and wry observations during an 18-day road trip from New York to Reno in Nevada in 1960. She was headed to Reno on assignment to photograph the making of the film The Misfits, starring Marilyn Monroe. Travelling solo, Morath journeyed through cities and their outer limits, small-town America, ghost towns and expansive open spaces, all of which possessed a unique character. The Austrian-born photographer documented her trip with the fresh eyes of an outsider in the United States, keeping a diary of the trip, made each night in a different hotel room. Here, we present some excerpts that capture the spirit of being on the open road in America, as published in the book Road to Reno. 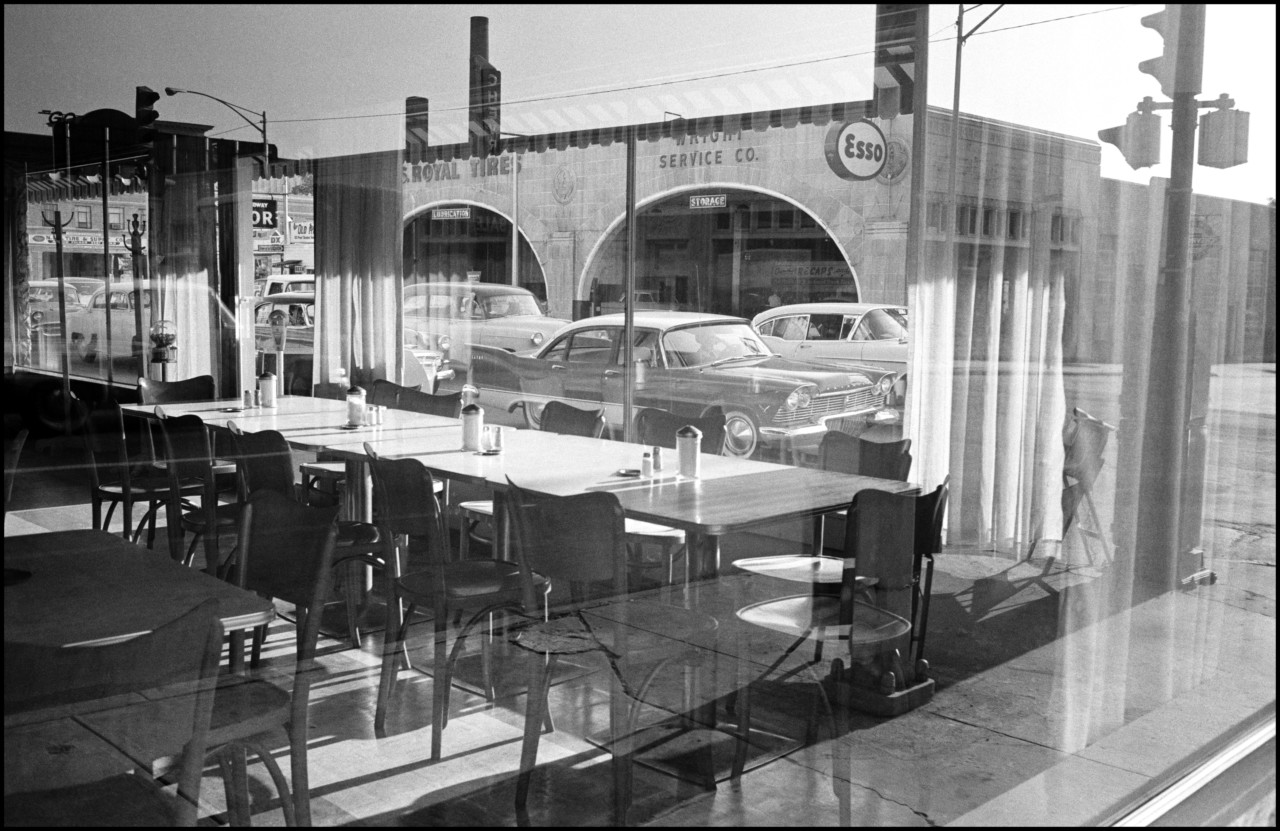 "Somehow I am on the right highway, there is no landscape, grey rain covers everything, steam thrown back by the hot earth" 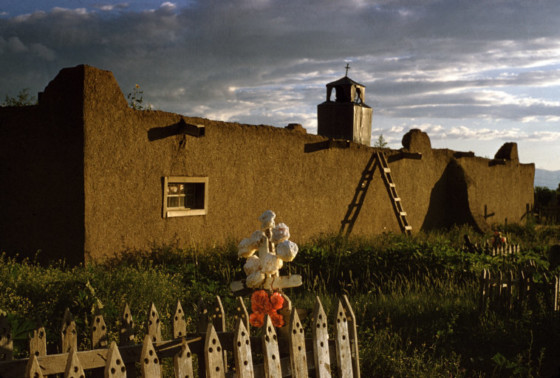 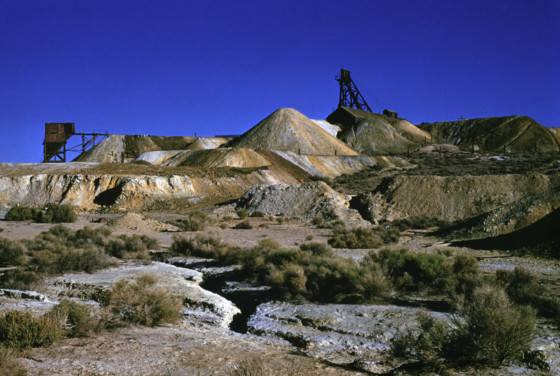 “Exit via Holland Tunnel, it was marked on my map, then New Jersey turnpike. All I was aware of were the cars next to me and the daring curves of the speedway, then signs where to turn off. Nervous searching for five and ten and twenty-five cent pieces for tolls. Exact change, please, one hand outstretched, a wire basket to hit. I panic. But just then it is all over. Somehow I am on the right highway, there is no landscape, grey rain covers everything, steam thrown back by the hot earth.”

“Sirens. The turning lights of a police car. An accident. Two cars, completely battered. Out of the torn side of one of them spill the many objects a family packs for a holiday: dolls, boxing gloves, picnic tackle. Way out, remaining there senselessly and frail, a wicker baby carriage. I better go and drink some coffee. Howard Johnson, a sign says. “A landmark for hungry Americans.” I stop anyway. “All day is dedicated to the drive through the amazing landscape of the Blue Ridge Mountains. It almost seems to be an accident that we are going on such a smooth road, things around are so untouched, trees and small wooden houses and the endless waves of blue hued mountain crests. There are still rhododendrons blossoming and marguerites and arnicas and flowers that look like windblown veils. The air smells of pines warmed by the sun.”

“That night we stayed in Oak Ridge. The name of a place that became famous because here the first atom bomb has been built – at least the first one that has been dropped. On Hiroshima. As we arrived in the evening lights, there are only roads lined by green bushes, a river in the twilights, a few signs that this road is not open to the public, one club called the Atomic Bears Club, a supermarket with a vast empty parking lot in front of it and finally a motel.” 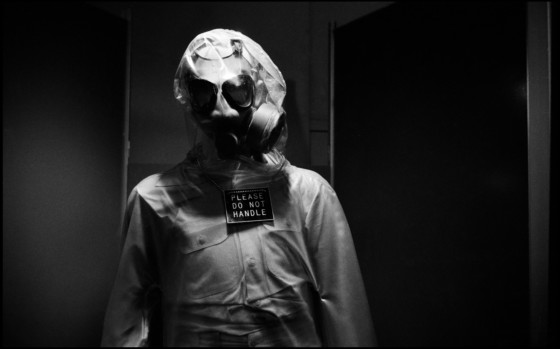 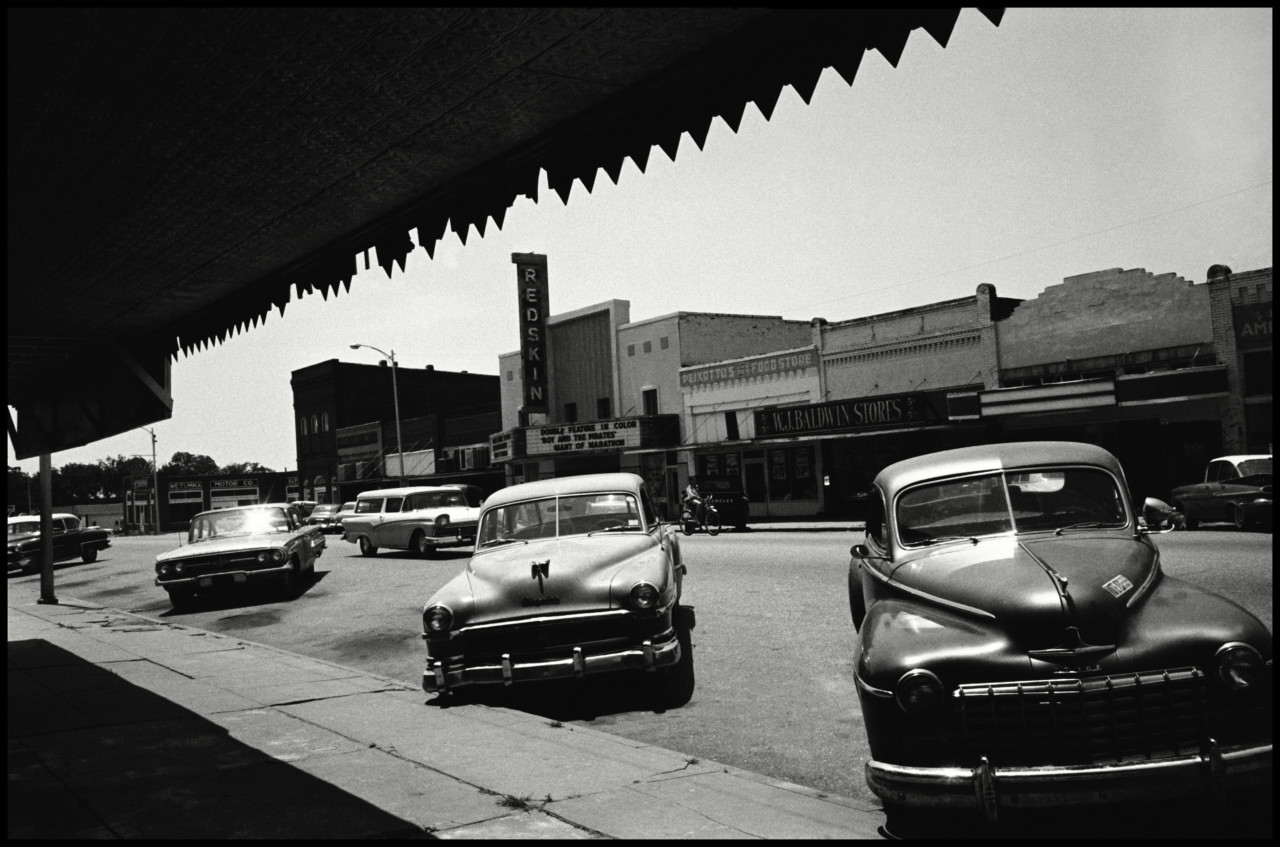 From El Reno behind Oklahoma to Albuquerque via Amarillo

“In the early morning, a straight road. Green enough country, small towns and villages string along like glass beads of different shapes and colors picked up carelessly by a little girl. Then, suddenly, at Adrian the country changes, spreads out endlessly, pale green flat, hemmed in by the clear cut blue shapes of rock formations: the desert begins. Stranger insects crush themselves to a hasty death against the windshields, stranger smells of wild grass and passing by animals invade the car.

The road stretches as far as one can see, a lead-colored ribbon leading West. Cars run like hurried beetles, stuffed with their passengers, men and women and children, with suitcases and paper bags with beds and blankets. Sometimes a couple of naked feet stick out of a window to cool off, sometimes a tired arm stretches against the cool wind. There are again the carelessly strung villages, the lonely trade posts announcing gasoline and Indian curios and coffee and hamburgers.” 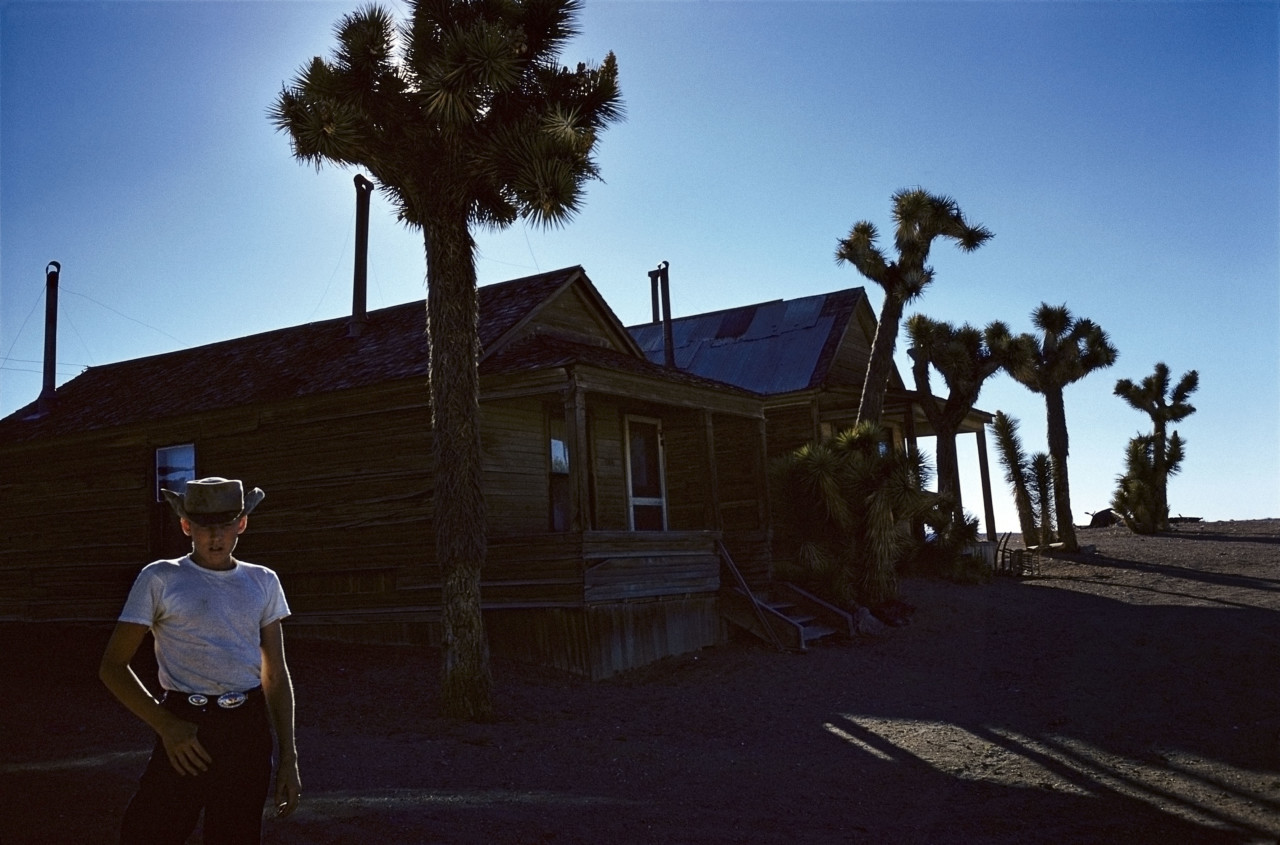 "Cars run like hurried beetles, stuffed with their passengers, men and women and children, with suitcases and paper bags with beds and blankets." “The car makes its way past Espanola into the forests west of Taos. A young man with blue eyes and Mexican features fills up the car with gas and the waterbag in front of the cooler with fresh water and he tells us that one day he wants to become a doctor. It sounds quite plausible and he is quite sure that it will work. Wonderful land of opportunity for the young. Nobody will ask who was your father.

There is loneliness now in front of us, dust weaves a train behind the car as we wind our way. Somewhere, not too many miles away, lies Los Alamos, where the first atom bomb was made, a little farther south it was exploded. But the mountain street we chose bears no trace of these modern times, of any human times. Forests and pastures intermingle. Small animals sit in the middle of the road ears pricked and brown eyes watching but their bodies immobile until the car nearly touches them.” 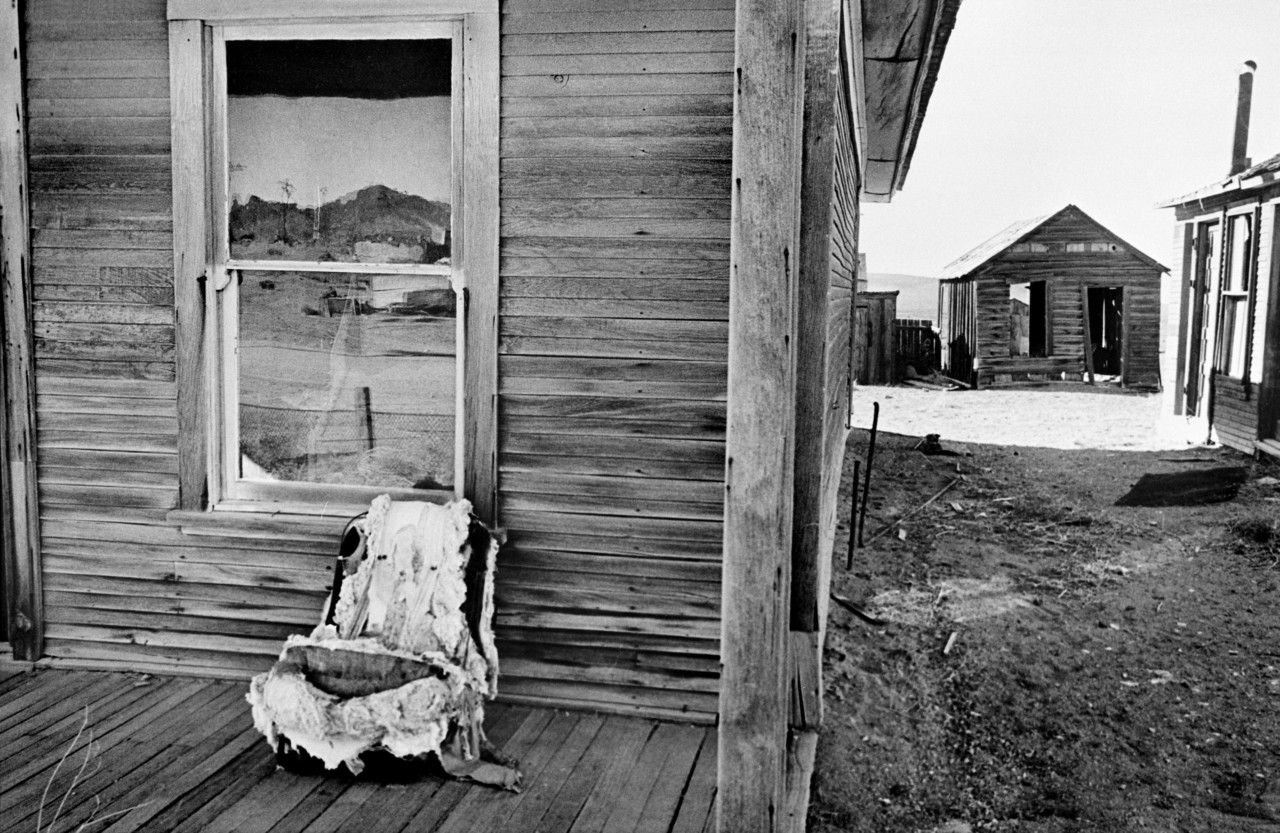 “Practically nothing announces the approach of one of the most extraordinary places I was to see on this trip, grown out of the barbaric desires to gamble and gain and forget, Las Vegas suddenly receives you, wearing stage makeup in full daylights with the sophistication of a ham actor in an ambulant road show. The magnificent setting of this highly perishable world of a few boulevards, expensive hotels, motels, slot machines, chemin de Fer tables and chorus girls is the desert. Las Vegas spills you out into it again just a few minutes after you have left its main boulevard and one wonders how long it would take this sand to cover it all up, this heat to dry it all out.” 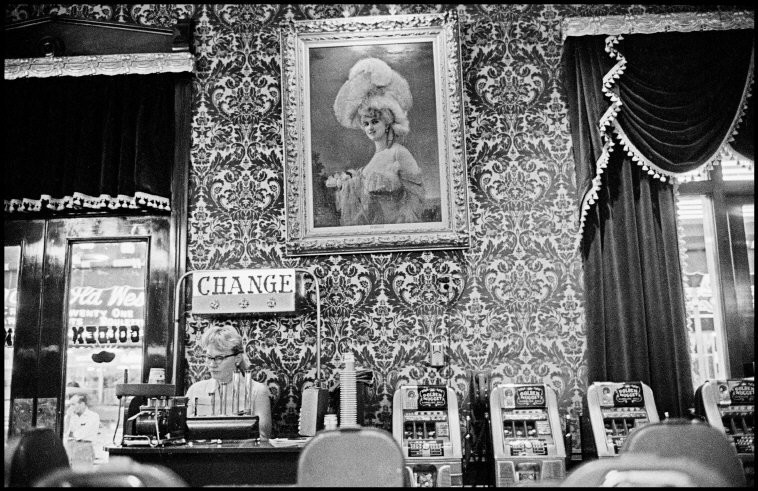 "Las Vegas suddenly receives you, wearing stage makeup in full daylights with the sophistication of a ham actor in an ambulant road show" 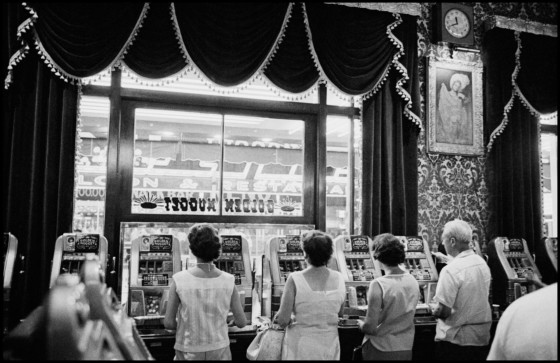 “We arrived in Reno on the evening of the 17th. Into a world so different from the loneliness of the trip, the world of a movie being started. It is difficult to describe the last extraordinary days, although they are still very much alive. Their colors are still fresh and, when I close my eyes, the road still seems to be passing in front of me, running straight and hot through the desert.”