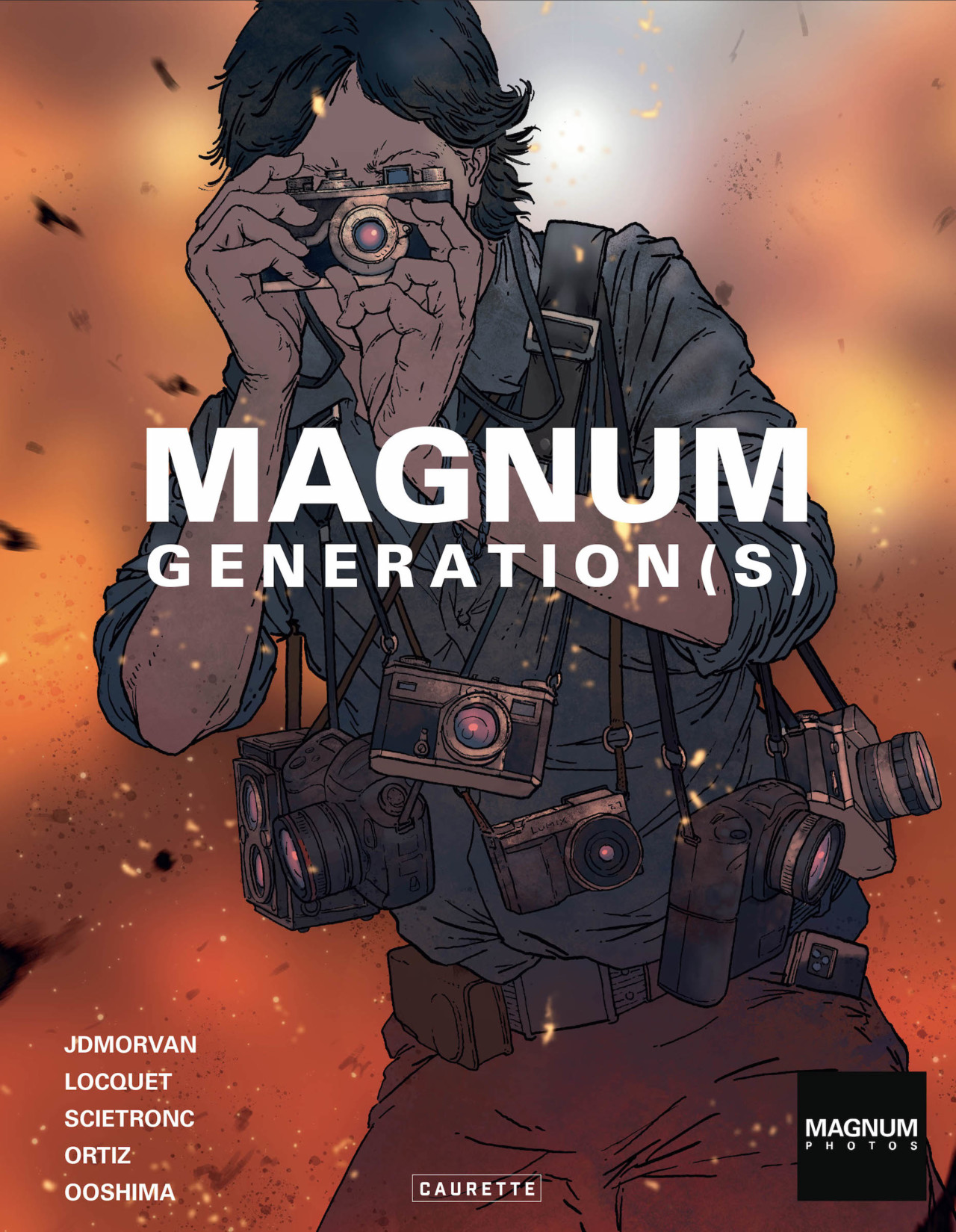 All images from Magnum Generation(s), published by Caurette © Editions Caurette.

To mark the 75th anniversary of Magnum Photos, celebrated comic book author Jean-David Morvan has written a comprehensive account of the agency’s founding. Filled with illuminating and often humorous anecdotes, Magnum Generation(s) brings those early years to life through a series of interlinked vignettes that draw on the characters of the founding photographers as well as the tumultuous times they captured.

“I spent about five years looking for documentation,” says Morvan. “I must have read 30 books looking for anecdotes and tracing all the histories.” Then, after spending a few months writing the book, his team of illustrators worked on the storyboard and recreating authentic scenes to give pictorial form to his narrative. “It happened quite quickly because we all work together in the same studio,” Morvan adds. 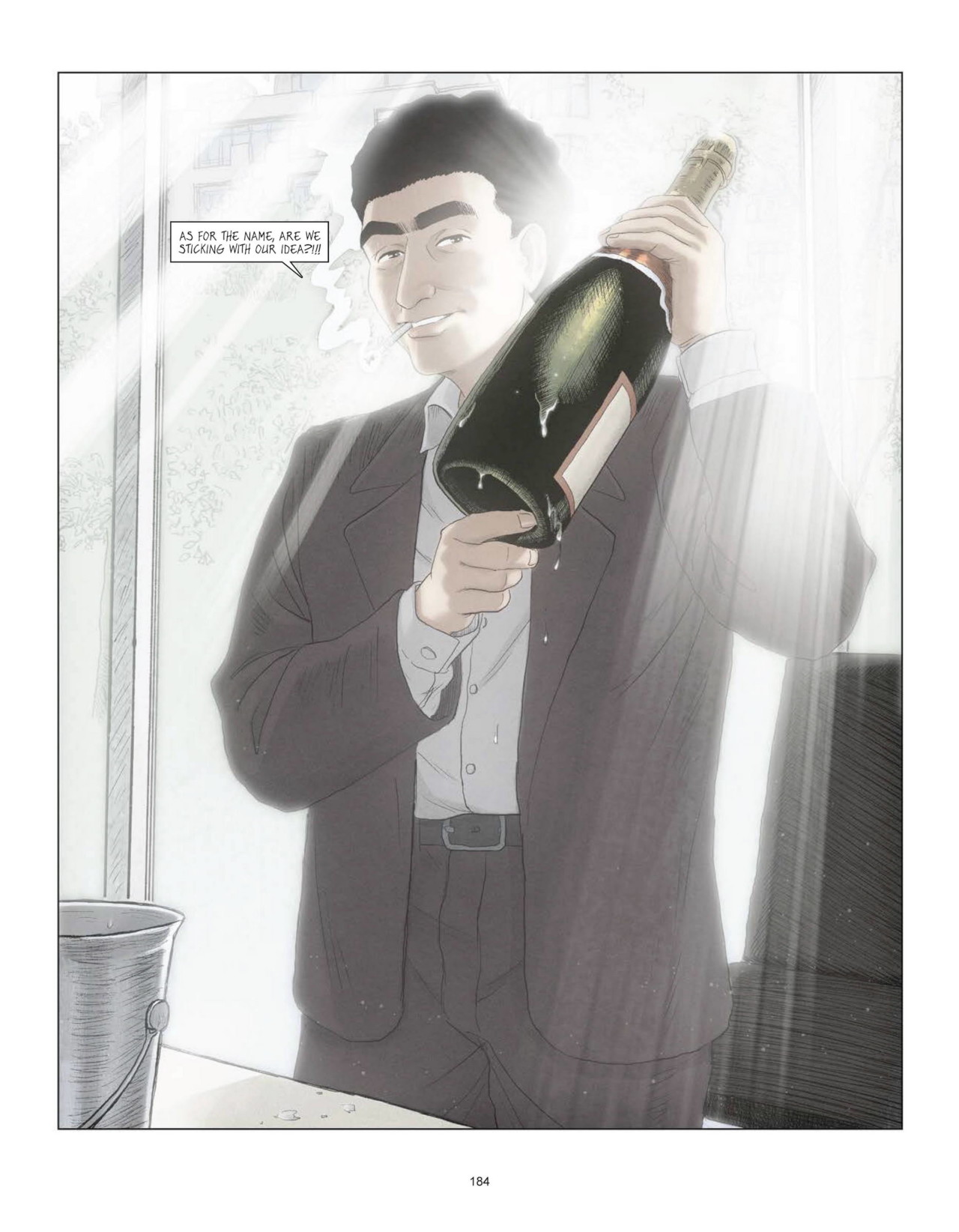 "I strive really hard to dive into the characters." 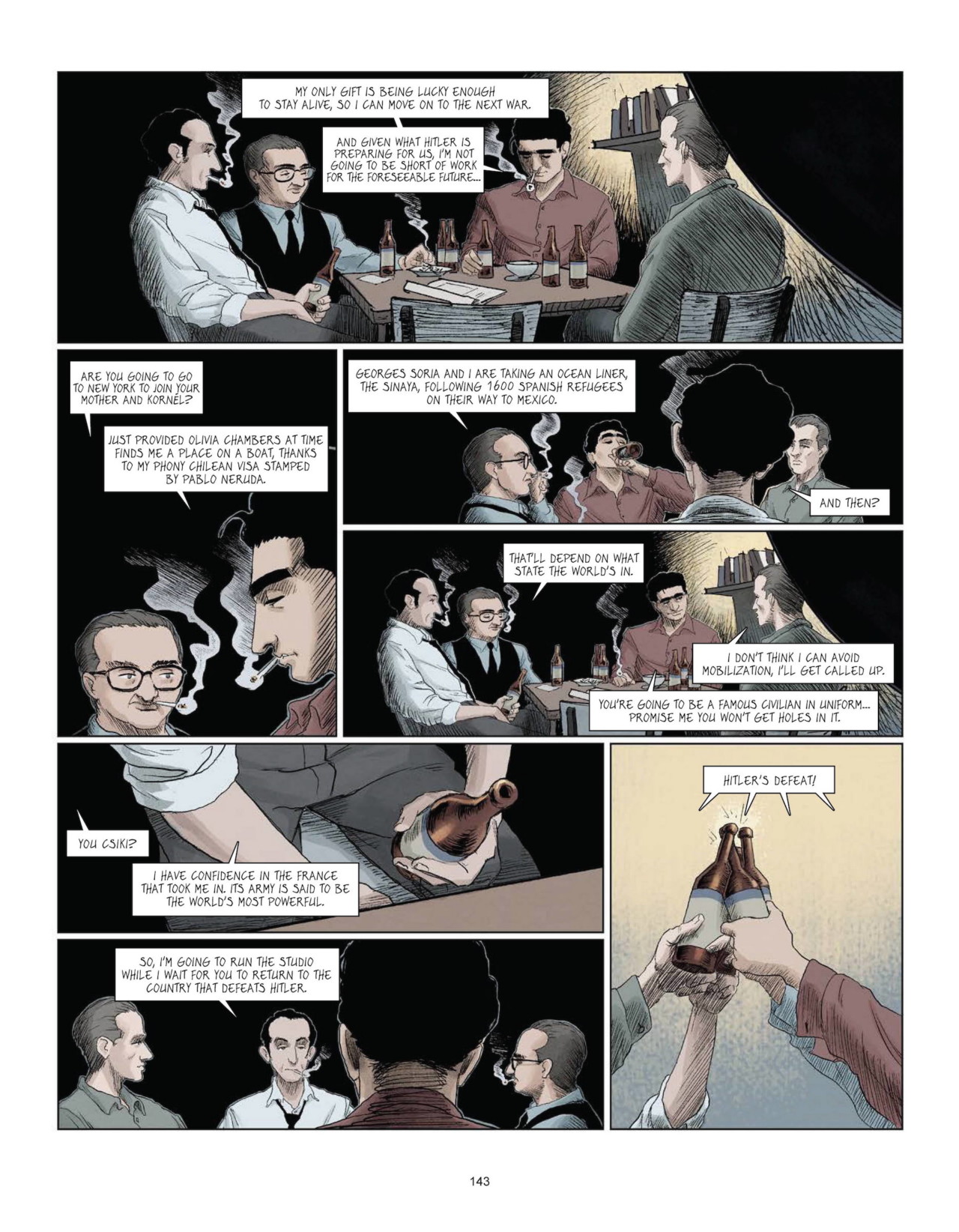 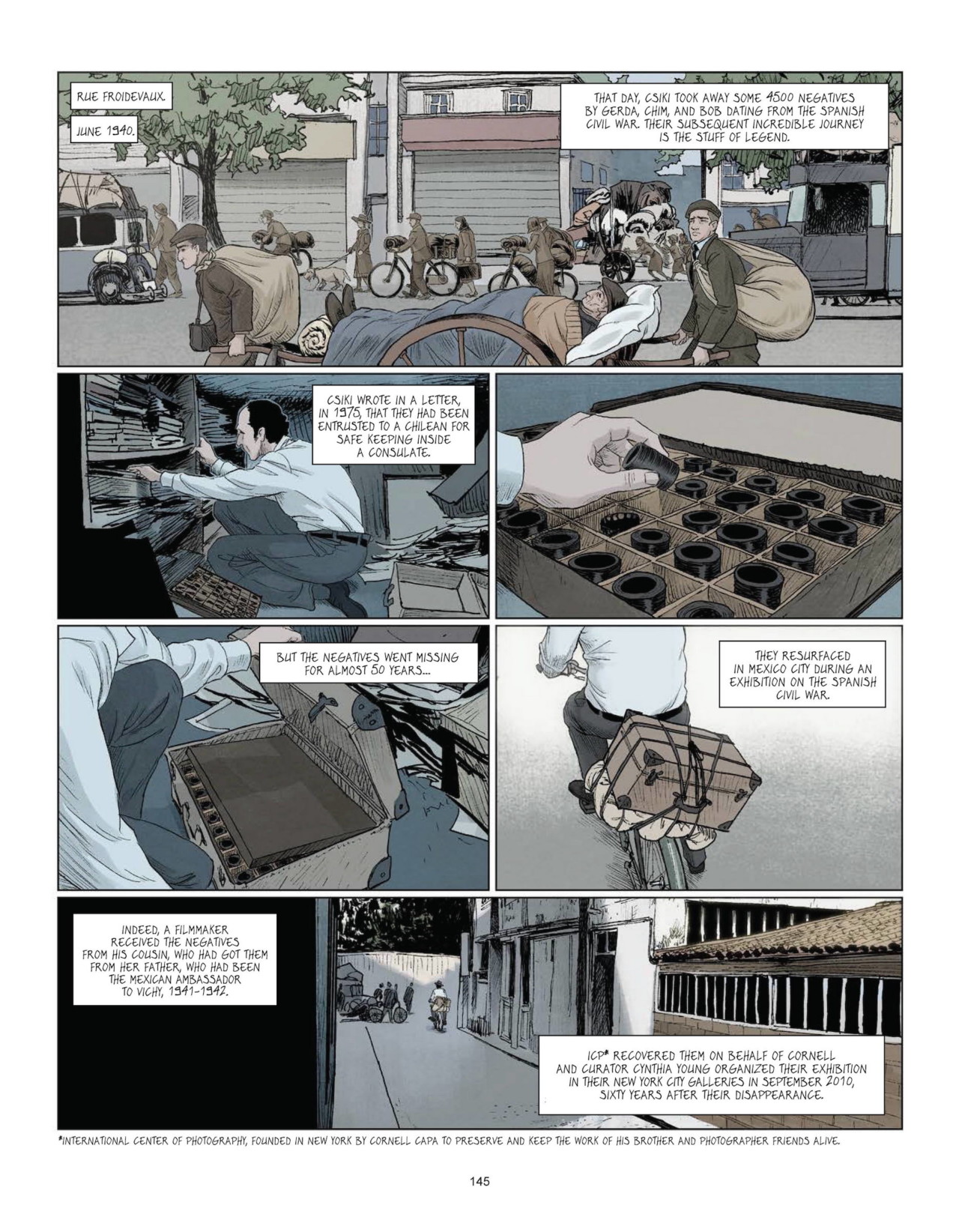 Passionate about photography, Morvan has previously made comics — or bande dessinnée — focusing on historic moments photographed by Magnum members, from Robert Capa’s reportage of the D-day landings in Normandy, to the Rumble in the Jungle, shot by Abbas in Kinshasa, to 9/11 and its aftermath shot by Steve McCurry in New York.

For each of the aforementioned projects, Morvan collaborated with Magnum, which provided access to images and documentation. Recalling how the collaboration with the agency began, he says: “I wrote a message… and two days later I received a reply inviting me to drop by and discuss ideas. I’d used documentation from Magnum’s photographers in my previous books, so it seemed logical to develop a project together.” Magnum Génération(s) interweaves different timelines. The book opens in 1954 with an extended conversation between Capa and John G Morris, the agency’s first executive editor, as they discuss the photographer’s decision to return to war reportage and accept a Life magazine assignment to cover the First Indochina War in what is now known as Vietnam.

The ensuing sequence set in Vietnam intersperses Capa and his trusted camera, in search of a story, with the actual photographs he made in the field, right up to his final frame taken shortly before he stepped on a landmine and was killed.

Following a brief obituary on Endre Ernő Friedmann (the birth name of Capa, born in Budapest in 1913), the book introduces each key character at Magnum by recounting how they received the news of his death. With a furrowed brow, David ‘Chim’ Seymour tells the news to his Magnum colleagues in New York. Initially, they assume that the information is wrong and that the media have confused Capa’s name with that of another Magnum photographer, Werner Bischof, who had died in a road accident in Peru nine days earlier. The story then shifts to Bischof reviewing his contact sheets in the back of a car careening along a mountainous road in the Andes, once again narrating his final days around the pictures he took along the way, including his iconic photograph of a a boy playing a flute as he walks along the route to Cuzco.

A little further in, the story flashes back to Capa’s youth in Hungary, where he was imprisoned under an anti-semitic, military regime, before moving to Berlin to pursue his university studies. It is here that Capa began working as a darkroom assistant for Simon Guttmann, founder of Dephot agency, who later assigned him to report on Leon Trotsky delivering a speech to socialist students in Copenhagen in November 1932. A full page of Capa’s images is published in Der Welt Spiegel.

In parallel to Capa’s debut in photography is Hitler’s nomination as Chancellor of Germany. Fearing how Hitler will treat the Jews, Guttmann persuades Capa to leave Berlin. From there, he travels with a friend to Paris. In the City of Lights, we see Capa hanging out at cafés, starting to work for Vu magazine, and lamenting that magazine editors haven’t credited his photos. He meets and falls in love with Gerta Pohorylle – known professionally as Gerda Taro – who has moved to France after having been briefly detained in Leipzig for distributing anti-Nazi propaganda. 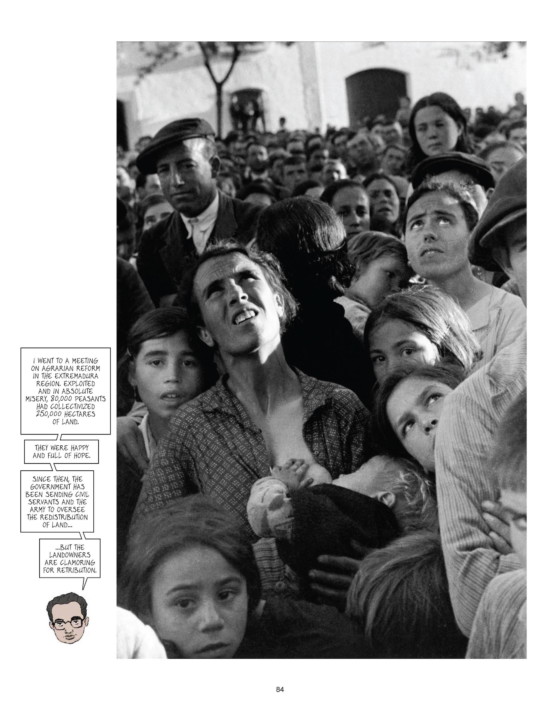 Taro becomes Capa’s agent, referring to him as an American photographer called Robert Capa in order to promote his work. Hanging out in Le Dôme café in Paris, the couple encounter other photographers and travel as photojournalists to the Spanish Civil War where they meet Ernest Hemingway, working as a war reporter.

Moving seamlessly between comic strips and black-and-white photographs, Morvan recounts Taro being killed whilst covering the Battle of Brunete, west of Madrid, in 1937, and Capa’s heartbreak at her funeral procession, attended by thousands in Paris. “For me, Gerda is the ghost of Magnum — she invented Capa’s name and made him famous — so her role was extremely important,” Morvan reflects. "For me, Gerda is the ghost of Magnum."

Morvan cleverly imagines how the friendships developed between Magnum’s photographers. For instance, Cartier-Bresson tells Capa how he buried his Leica camera in a farm’s courtyard in France, just before being taken prisoner-of-war by the Germans, and how he dug it up after escaping from a Nazi work camp in Stuttgart in 1943.

“I strive really hard to dive into the characters,” remarks Morvan about his meticulous level of research. “My job is less dangerous than theirs, but bande dessinée is a good way to talk about the contemporary world.”

It’s around a modest kitchen table that Capa discusses his initial idea to create a photography agency in order for photographers to own the rights of their images and write their own captions. In 1947, the year of Cartier-Bresson’s exhibition at MoMA, the Magnum agency is established with offices in Paris and New York, and Chim as president. 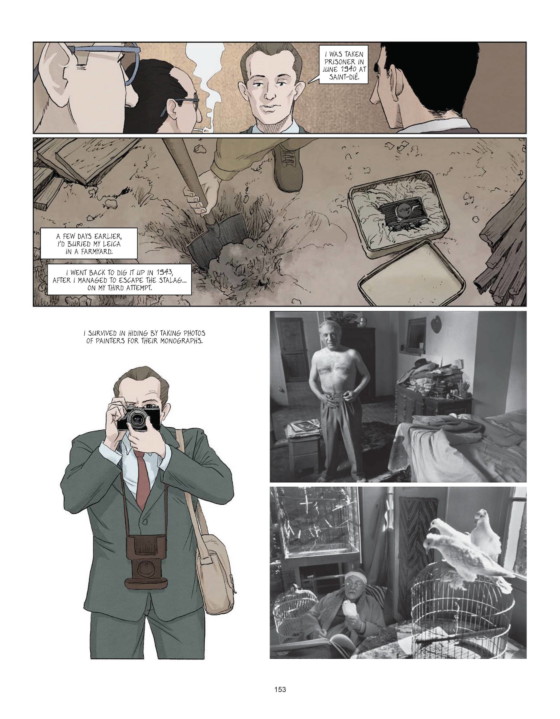 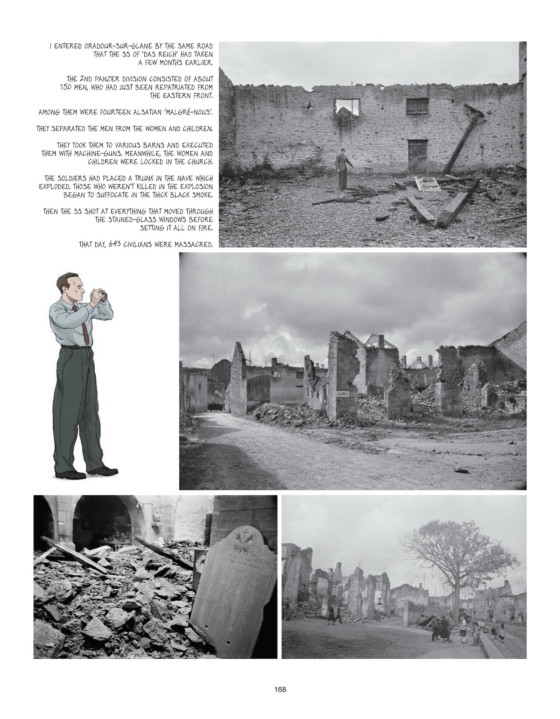 Morvan’s only regret about the book is the absence of Rodger’s photographs of the Battle of Naples in 1943, published in Life. “Even nearly 70 years later, the images still belong to Life, and we weren’t able to [freely] use them. Gerda and Capa’s photos were recuperated from Time Life by Cornell Capa after he founded the International Center for Photography in New York. But no one did that for Rodger. This brings us back to the reason why Magnum was created — for photographers to be free and own their photos.”