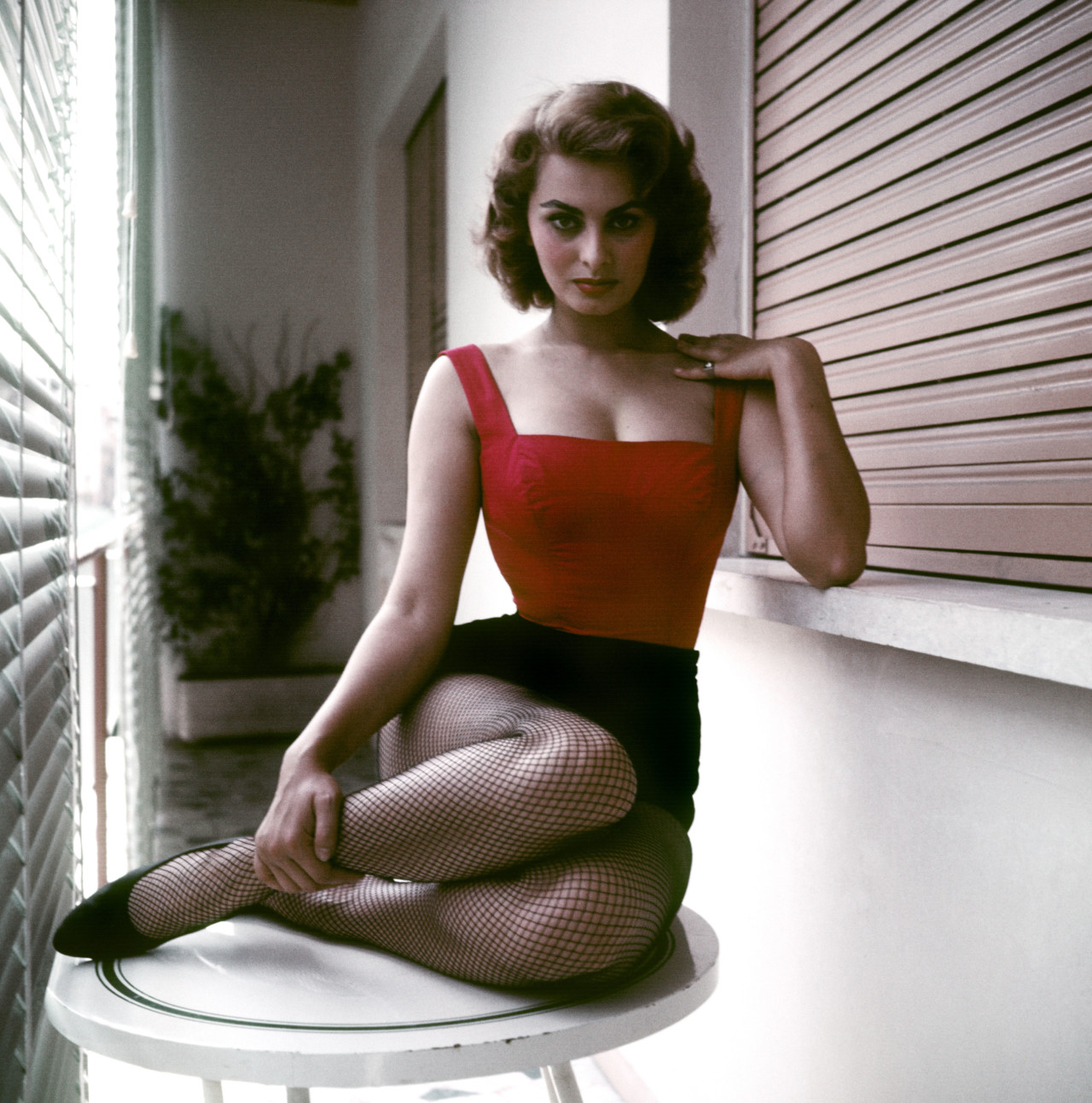 Here writer Sabina Stent reflects upon the images of Sophia Loren made by Magnum photographers over the years.

The below image of Loren is available as an estate stamped or unstamped poster, in limited quantity, as part of the new Burt Glinn Magnum Editions Poster collection. Shop them all here.

There is no celebrity who embodies the phrase la bella figura quite like Sophia Loren.

Loren’s power continues to be her combination of old school glamour, earthiness, and Italian passion. “You have to enjoy life,” she once said. “There are so many positive things to think about.” Her attitude is a life of balance, one against deprivation and in favour of moderation. “Everything you see, I owe to spaghetti” she famously declared.

The camera continues to love Loren, and even now, she is considered one of the most beautiful women in the world. As a doe-eyed, young star photographed multiple times in 1955 by Magnum co-founded David Seymour, Loren stares at the viewer either straight-on or coyly over her shoulder. Whatever her pose, she appears not as a woman relinquishing her gaze but one in complete control of her image; she refuses to submit her power. This attitude combines neatly with her famous declaration that “sex appeal is fifty percent what you’ve got, and fifty percent what others think you’ve got.” 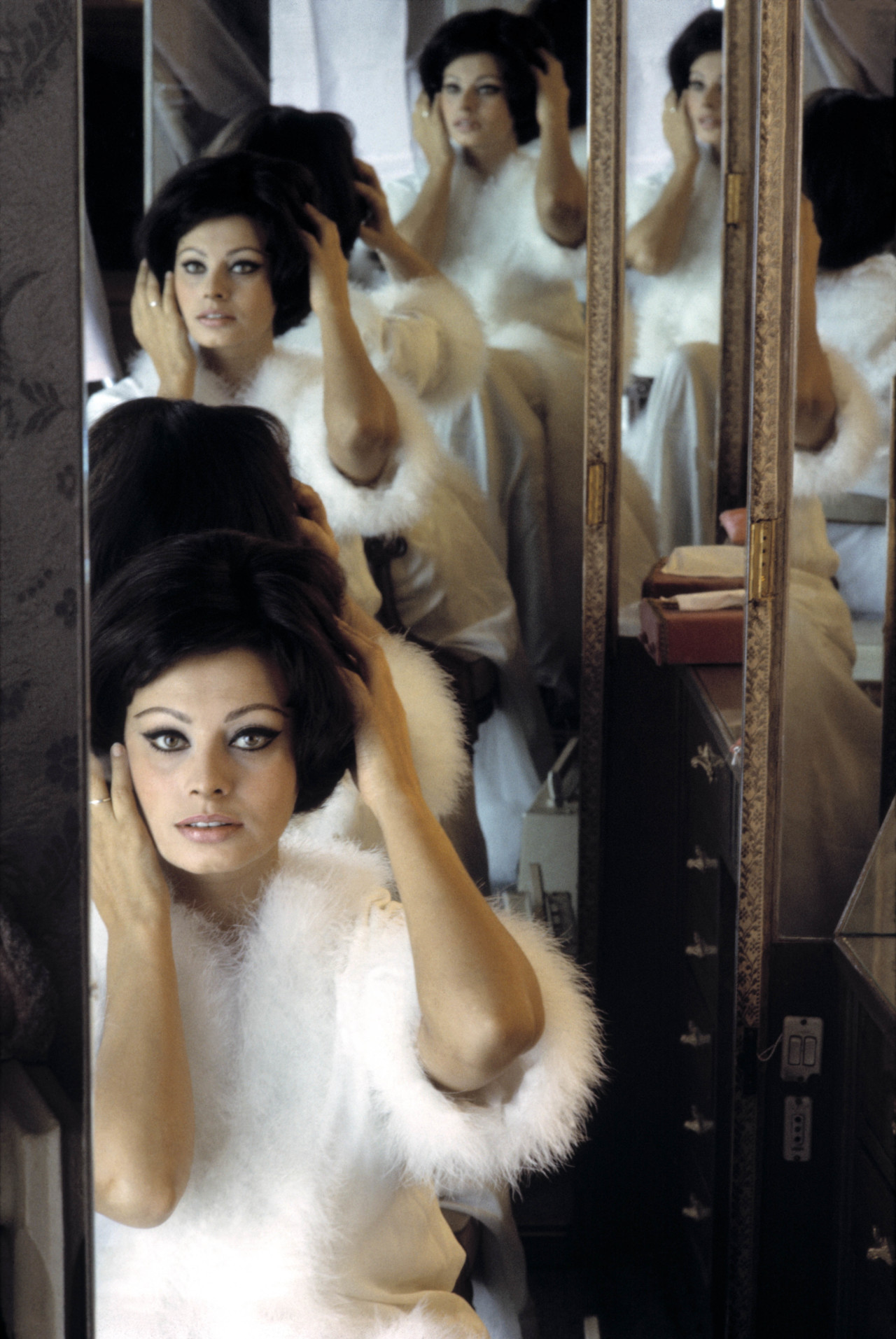 In 1957, Loren’s personal life attracted considerable attention following her marriage to Carlo Ponti, who was still legally married to his first wife, Giuliana. They would annul the union in 1962 to escape bigamy charges. In 1965 both Loren and Ponti became French citizens so Ponti could divorce Giuliana, and in 1966 they were at last legally married.

Ponti became her adviser as much as her life partner, suggesting Sofia Lazarro became Sophia Loren – a move devised to widen her audience. Aida (1953) was her first starring role under this billing, and the critical acclaim was unanimous. She made a further breakthrough in 1954 when she starred in Vittorio De Sica’s The Gold of Naples. Her next film would be Too Bad She’s Good, the first in a series of pictures she would make with Marcello Mastroianni. 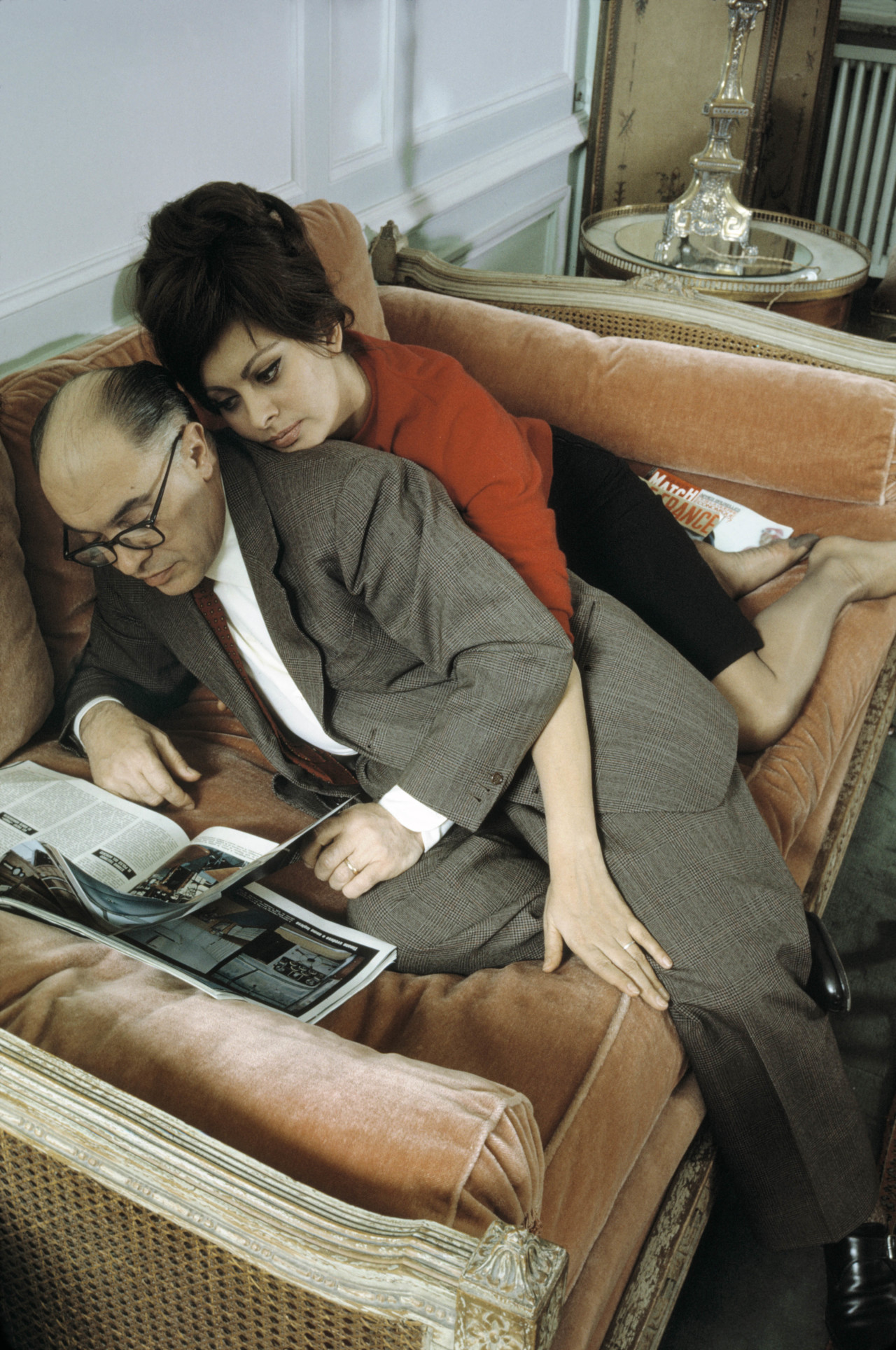 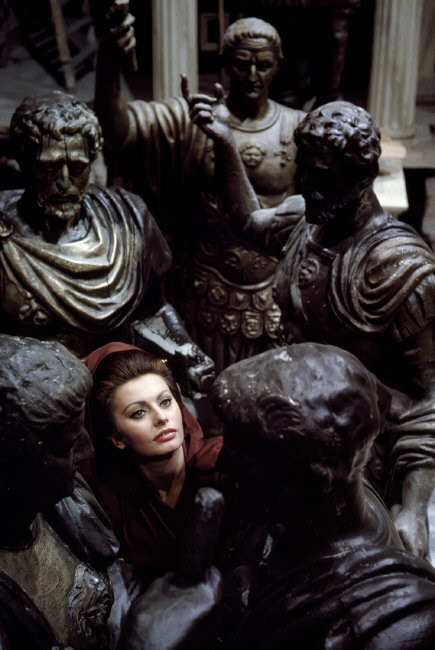 Burt Glinn SPAIN. 1963. Sophia LOREN during the filming of "The Fall of the Roman Empire." © Burt Glinn | Magnum Photos
License | 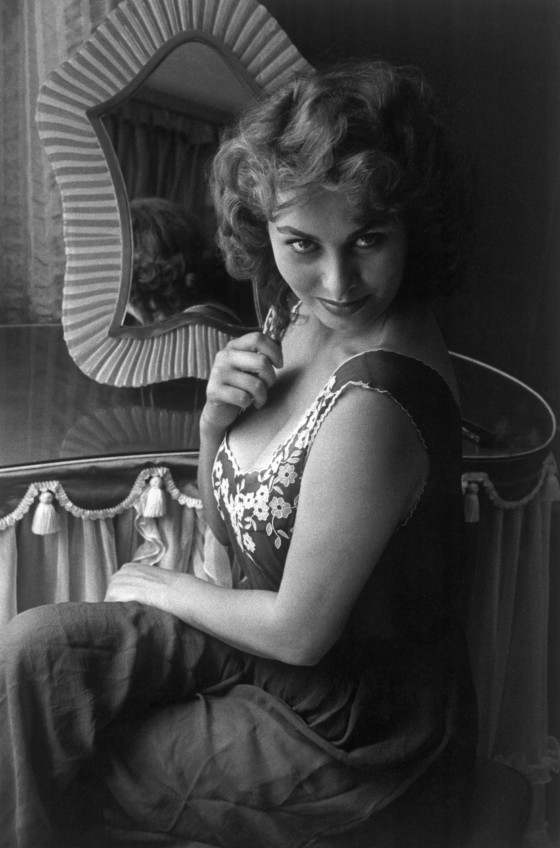 David Seymour Italian actress Sophia Loren at home. "I photographed Sophia in 1955, a budding actress, we talked over the phone and I explained what I wanted. She invited me over for a Sunday morning early mee (...)
ting, I found her in bed in a dark blue negligee although she was talking on the phone. She got up and changed costume, we went to a covered balcony of her apartment and I had nothing else to do but record a stream of poses which somehow met my memory of wartime pin-ups. All this was done with a touch of irony and maliciousness." Rome. Italy. 1955. © David Seymour | Magnum Photos A five-picture contract with Paramount Studios in 1958 catapulted Loren to international stardom, amongst these movies there was the romantic comedy Houseboat, in which she starred with her old lover, Cary Grant. Dennis Stock would capture the two sharing a table in 1957 Hollywood, the photograph interrupting their conversation. The scenario is enhanced by Loren’s surprised gaze over her right shoulder, a candid image of two ex-lovers and long-time friends. 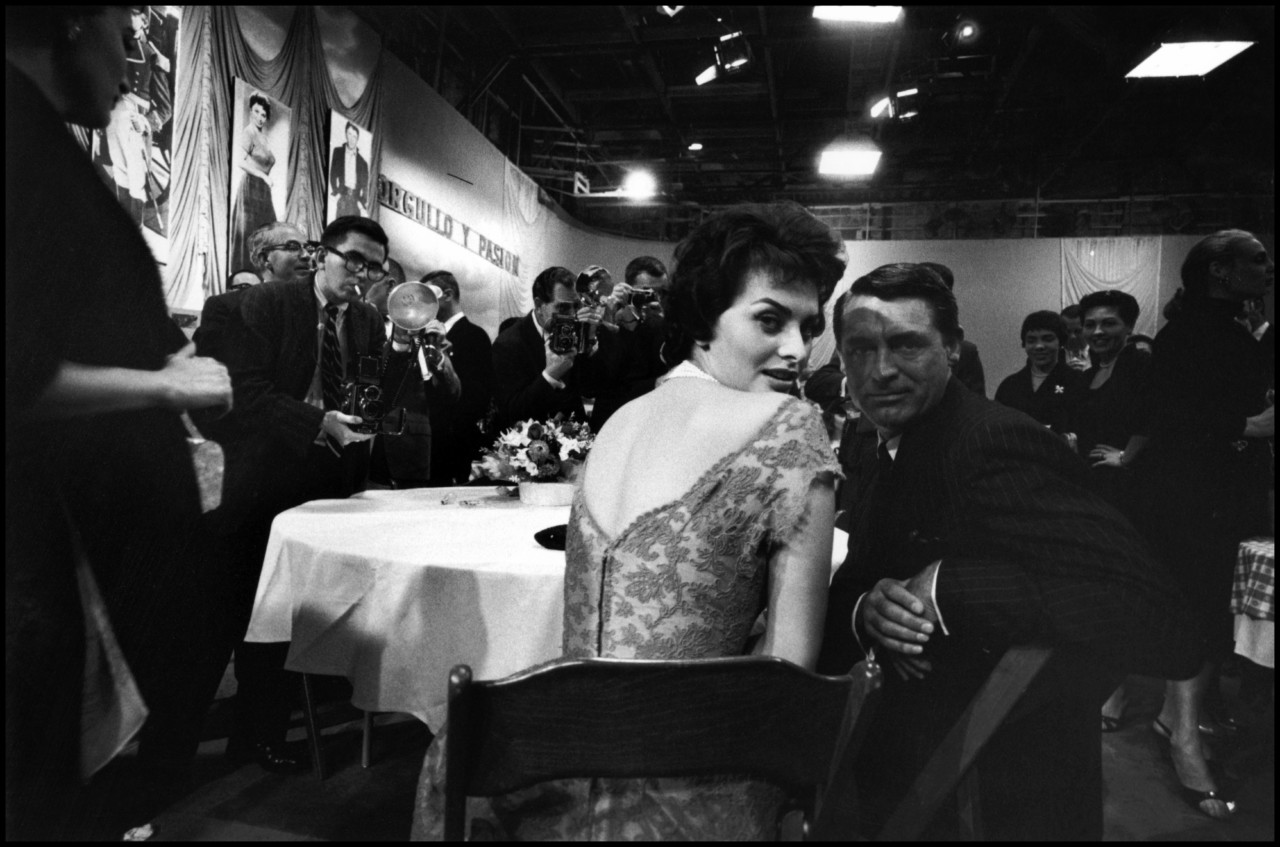 Although Loren would make the vivacious It Started in Naples with co-star Clark Gable in 1960, the year would also bring new intensity and drama to Loren’s choice of roles. She fought to play the role of Cesira, a mother attempting to shield her twelve-year-old daughter (played by Eleanora Brown) from the horror of war-torn Italy, in De Sica’s Two Women. The drama, which includes a harrowing rape scene, attracted critical acclaim and secured twenty-two awards for Loren. Amongst the accolades was the Academy Award for Best Actress (Loren became the first Italian actress to win the award a foreign-language film) and a Cannes’ Best Performance prize. She continued to work in Hollywood, including making the Paris-set drama, Five Miles to Midnight, with Anthony Perkins in 1962. The photographs taken by Elliott Erwitt on the set on have an almost noir-like quality, heightening and mirroring the tension of the movie itself. The images echo Erwitt’s famous assertion that “you just have to care about what’s around you and have a concern with humanity and the human comedy.” It is an ethos that Loren has more than adhered to herself over her career. "Everything you see, I owe to spaghetti" 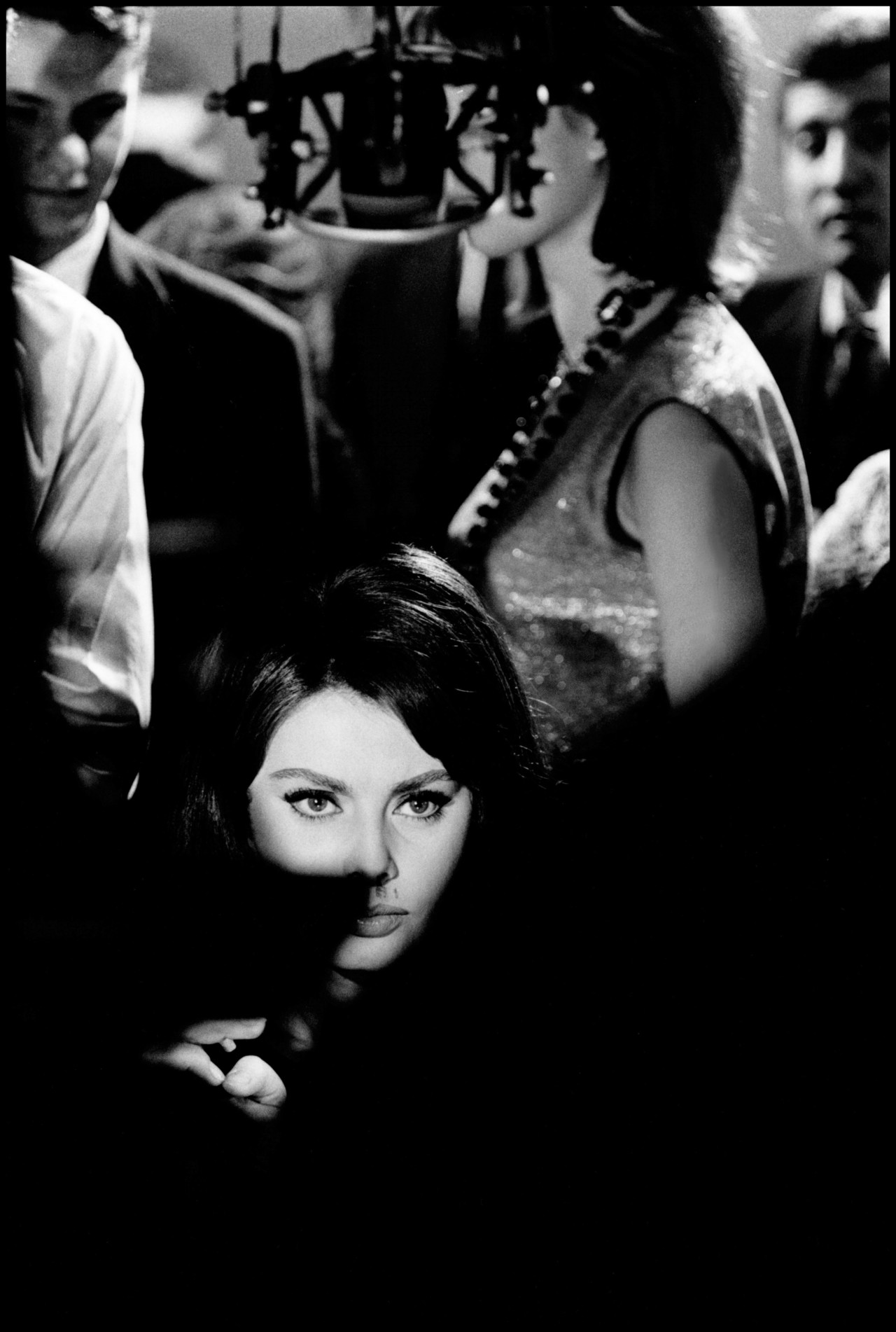 In 1991 Loren was awarded the Academy Honorary Award for her contribution to World Cinema, and a Golden Globe Cecil B. DeMille Award followed in 1995. After a fourteen-year break from American films, and a five-year hiatus from European cinema, Loren returned to the international screen in Nine (2009), Bob Marshall’s picture based on the Broadway musical. She was the only actress considered for the role of Daniel Day-Lewis’ mother.

Loren’s stardom shows no sign of waning, and her continued annual presence as at the  Academy Awards continues to dazzle audiences. No individual symbolises both Italy and Hollywood quite like Loren: la bella figura uniquely positioned as both one of the world’s most arresting women, and one of our last connections to a glamorous cinematic past. 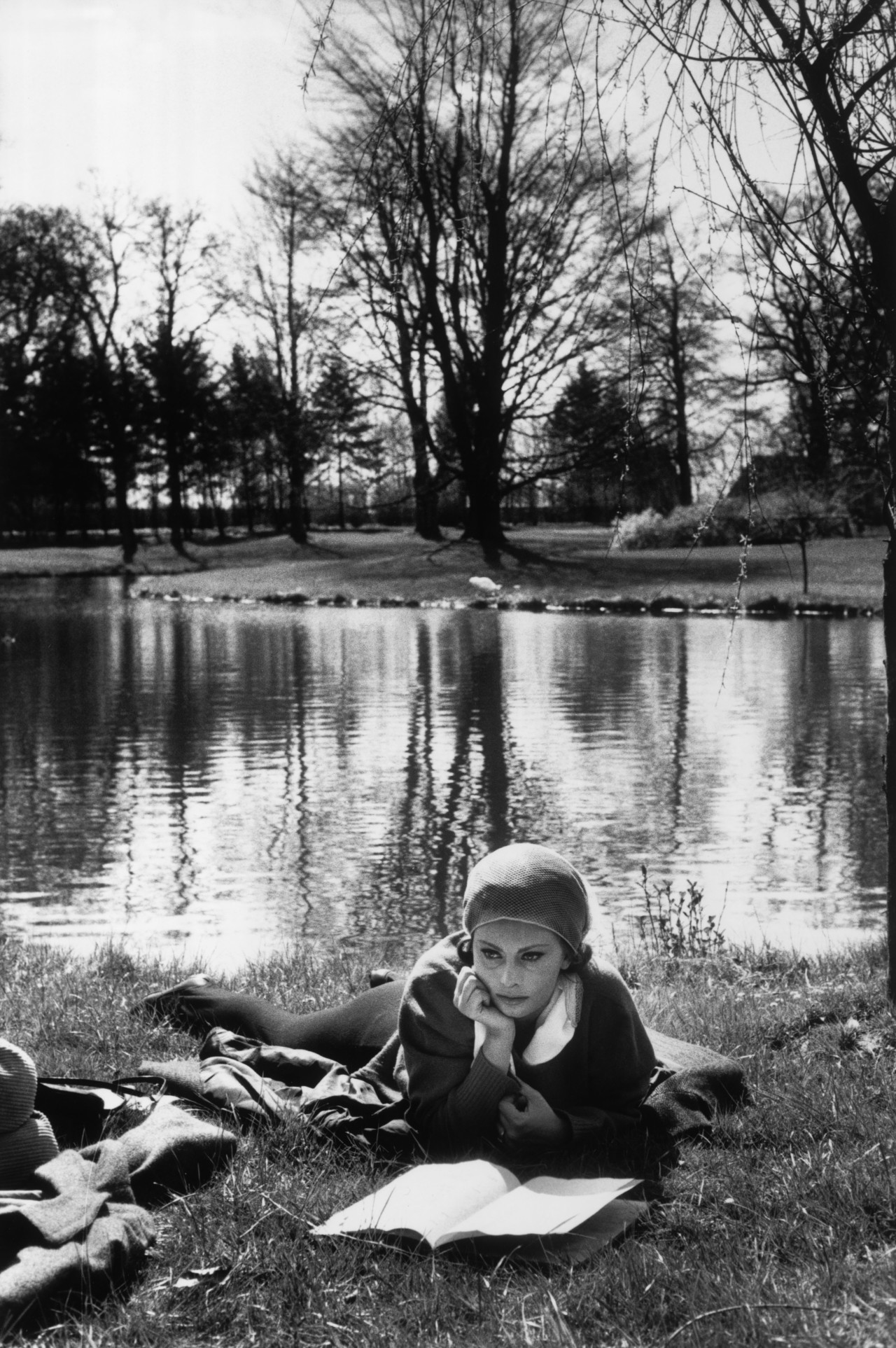