Inge Morath photographed the making of Nicholas Hytner’s filmic adaptation of The Crucible by Arthur Miller, a tragic historical drama based on the Salem Witch Trials starring Winona Ryder and Daniel Day-Lewis 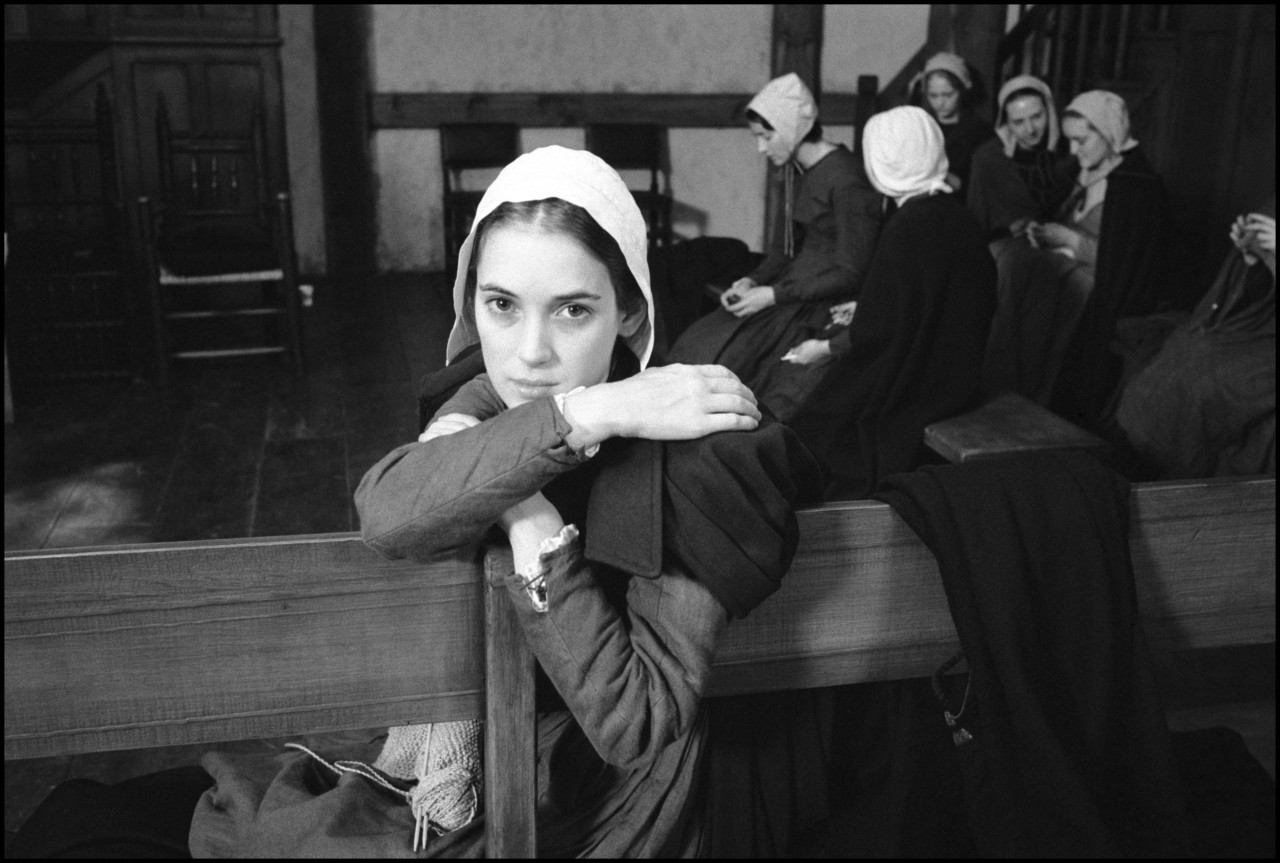 Magnum photographers have, over more than seven decades, captured pivotal moments in popular culture as much as historic events and societal sea changes. Working behind the scenes on sets of many classic films, they have captured not only iconic stars at various stages of their careers, but also documented the changing nature of cinema and film production. Sets, equipment, and special effects that once seemed futuristic are, with the passing of time, rendered disarmingly romantic.

Here, we look at Inge Morath’s coverage of the making of The Crucible by Nicholas Hytner, featuring an all-star cast helmed by Winona Ryder and Daniel Day-Lewis. Filmed over 40 years after Morath’s husband Arthur Miller wrote the original play, it is a fraught tale of revenge, suspicion and hysteria which divided critics but remains a firm favourite among film fans.

See more instalments in the On Set series here. 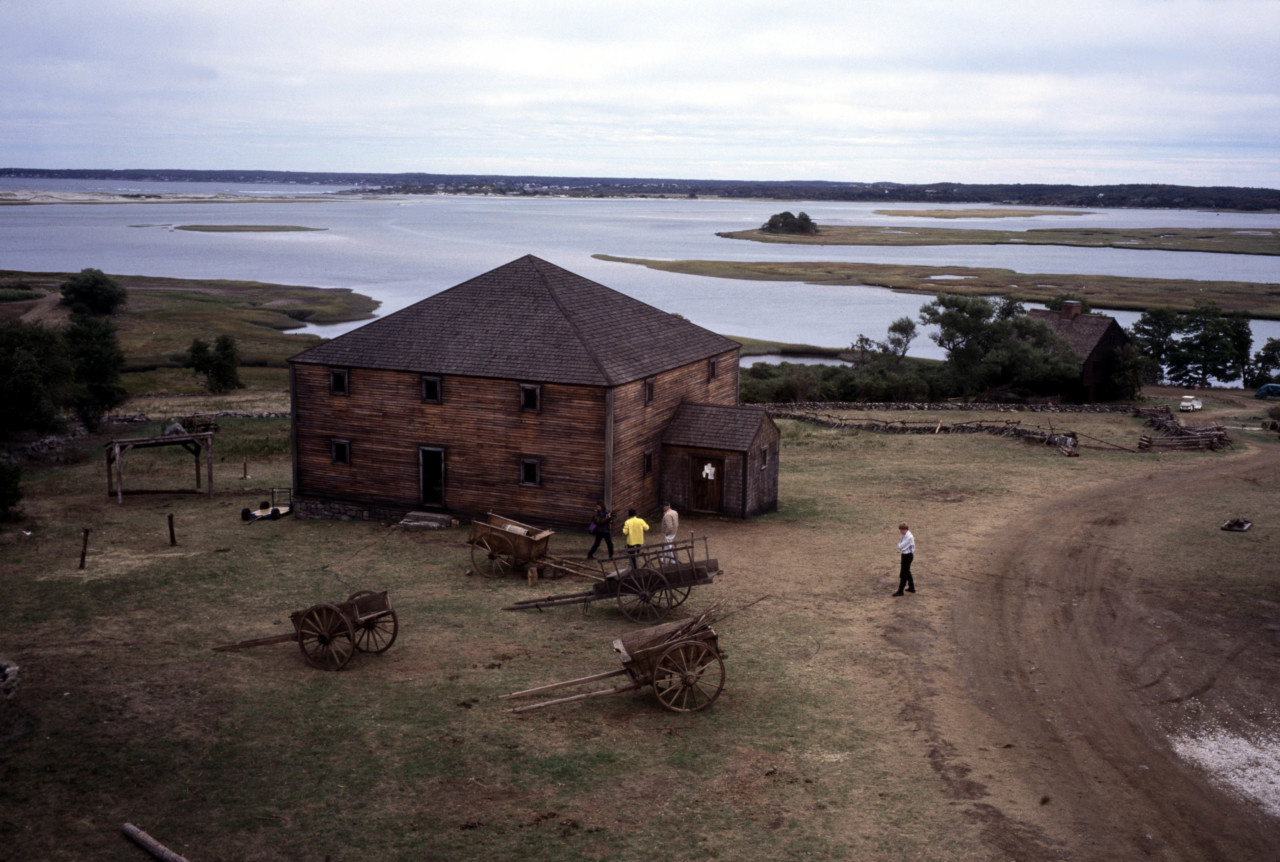 In early 1996, filming began on British director Nicholas Hytner’s second feature film, The Crucible. Known for his extensive work in theatre, Hytner was an auspicious choice to direct the cinematic version of Arthur Miller’s renowned 1953 play, an allegory about the anti-Communist government witch hunts of post-war America, wrapped up as a re-telling of the Salem Witch Trials of 1692. Miller agreed to adapt the screenplay for the film, and his wife, the lauded Austrian-born photographer Inge Morath – doyenne of evocative portraiture, of celebrities and civilians alike – was on hand to document its production.

Hytner, who was 40 at the time, was awed by the 80-year-old Miller’s participation in the process. “It was like going to Shakespeare and asking for amendments to King Lear,” he told Entertainment Weekly. Fortunately, the collaborators soon fell into a companionable step, and Miller accompanied the film’s cast and crew to its principal location – the bucolic Hog Island in Massachusetts, a remote wildlife refuge just miles from the site of colonial Salem – to oversee the shoot. As Morath’s candid photographs attest, the bespectacled playwright is a prominent figure on the set, often captured deep in one-on-one conversations with the likes of Hytner, Day-Lewis, Ryder and Paul Scofield, who gives a towering performance as the trials’ forbidding judge, Thomas Danforth. 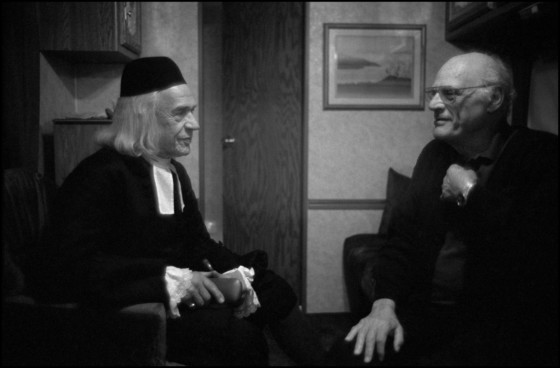 Inge Morath Paul Scofield and Arthur Miller in conversation on the set of the film of 'The Crucible'. Hog's Island, Massachusetts. USA. 1995. © Inge Morath | Magnum Photos 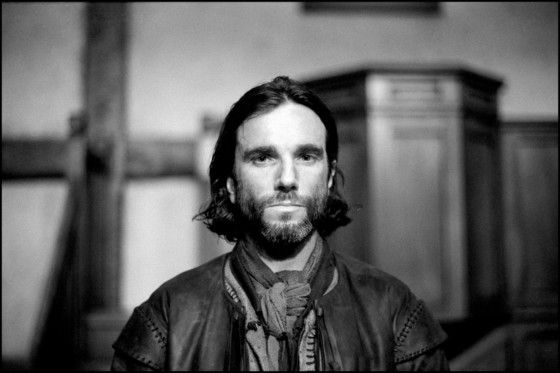 "The mood on set was, it would seem, surprisingly calm, given that Miller’s emotionally wrought script required most of The Crucible’s cast to whip themselves into states of escalating frenzy and suspicion." 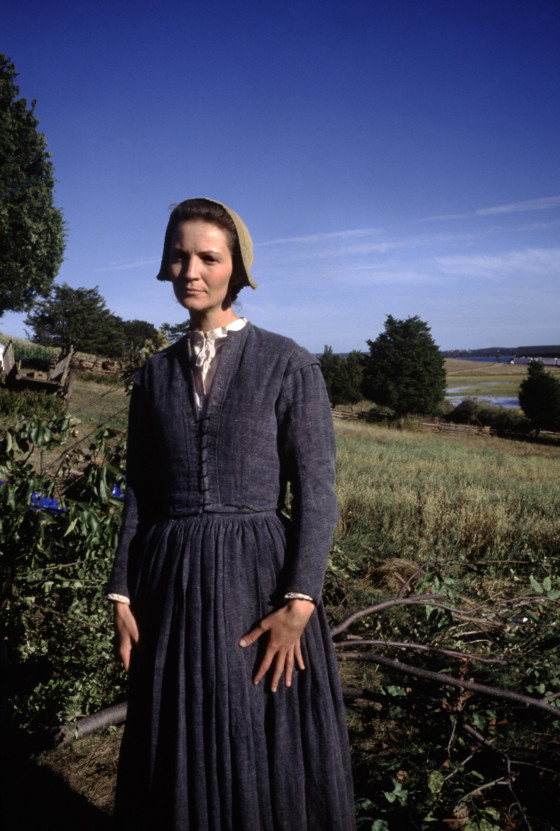 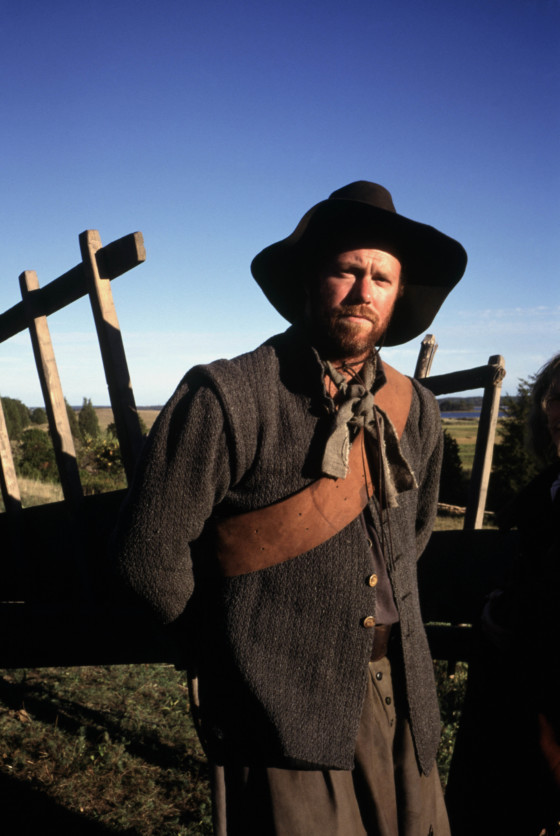 Morath was famously at ease in any given situation – something that evidently rubbed off on her sitters. Her behind-the-scenes insight into The Crucible’s making is intimate, relaxed, and wonderfully atmospheric: an extra and his wrinkled mastiff, Goliath, lounge dozily in the sun; actors gaze intently at her lens, or sit lost in thought, unruffled by her presence. The mood on set was, it would seem, surprisingly calm, given that Miller’s emotionally wrought script required most of The Crucible’s cast to whip themselves into states of escalating frenzy and suspicion. 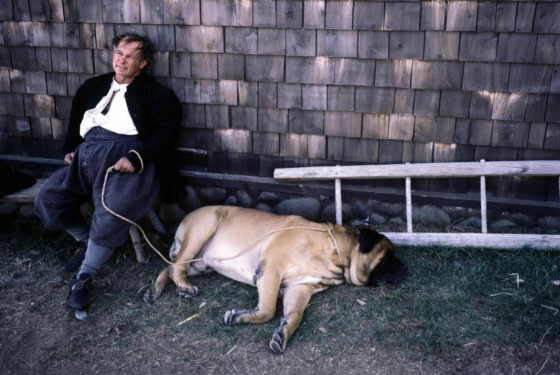 Inge Morath An extra on the set of "The Crucible" with a mastiff named Goliath. Hog's Island, Massachusetts. USA. 1995. © Inge Morath | Magnum Photos Inge Morath A break during shooting on the set of "The Crucible." Hog's Island, Massachusetts. USA. 1995. © Inge Morath | Magnum Photos The film begins with the young girls of Salem dancing around a fire, laughing wildly and tearing at their clothes, accompanied by a Barbadian slave, whom they instruct to cast love spells upon the objects of their desire. They are spotted by the Reverend Parr, uncle of the wildest reveller, Abigail Williams (Ryder). Williams is full of lust and fury following her rebuffal by her one-time lover, the married farmer John Proctor (Day-Lewis). When two of the group’s youngest members fall ill, she and her cohorts claim they’ve been bewitched in order to avoid punishment – and Williams seizes her opportunity to wreak revenge.

Terrified by the girls’ increasingly dramatic claims that the devil has taken hold of their community, the citizens of Salem call upon a special court to investigate. Ultimately, over 100 residents are tried for witchcraft – including John Proctor’s saintly wife, Elizabeth (an Oscar-nominated Joan Allen). The defendants find themselves in a horrifying position: if they plead guilty, they go to jail; if they plead innocent – and by extension refuse to renounce the devil – they hang. 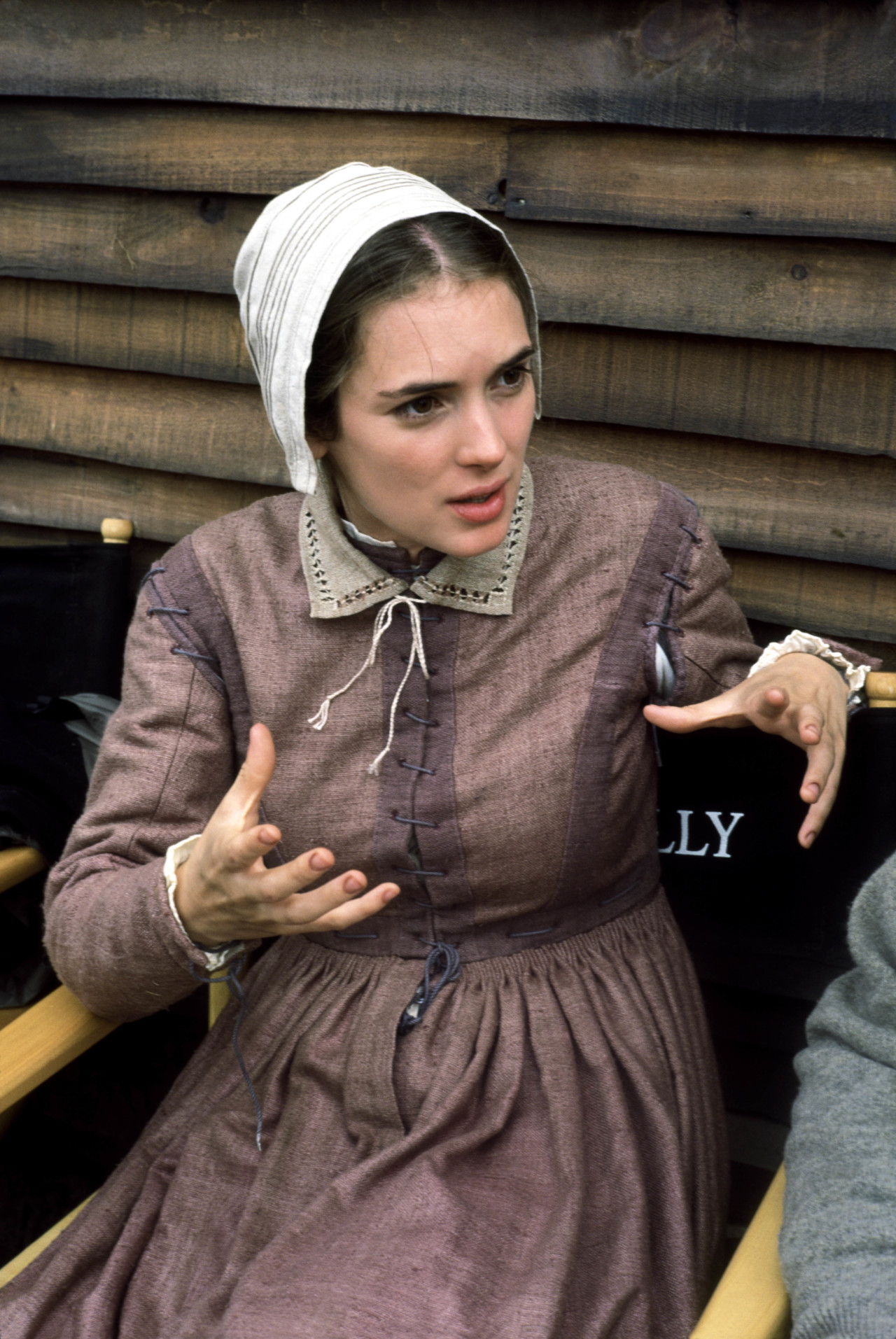 Recreating the rugged, isolated environs of 17th-century Salem was integral to lending an air of authenticity to the film – both visually and for the benefit of its cast – and as such, The Crucible’s production team opted to hand-craft an entire 12-building village from scratch. Many of Morath’s shots show the film’s various stars sitting in costume against the set’s timber exteriors, with nothing but the back of a director’s chair to hint that they are in fact inhabiting the 20th century. “When they were on the island, they stayed very much within character,” Morath noted in conversation with Entertainment Weekly. ”It was almost like they were living in Salem.” And indeed, a number of the cast even refrained from washing during the month-long shoot to ensure they looked suitably scruffy. 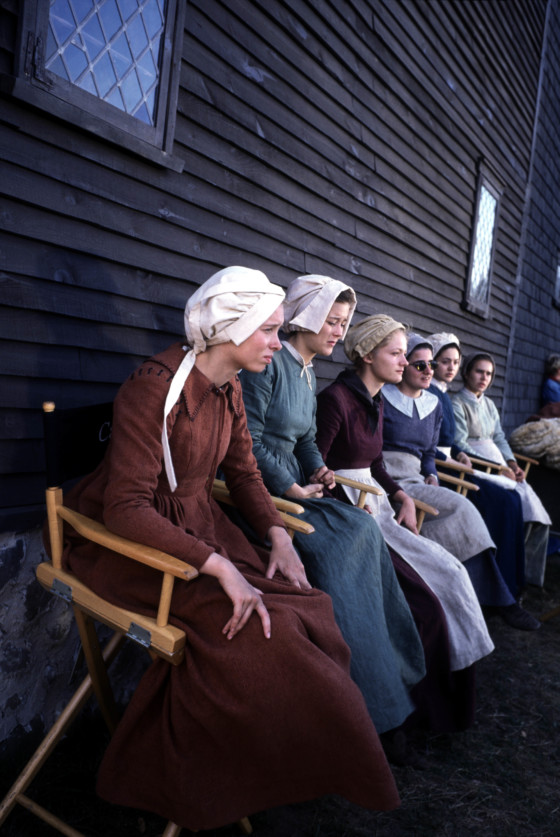 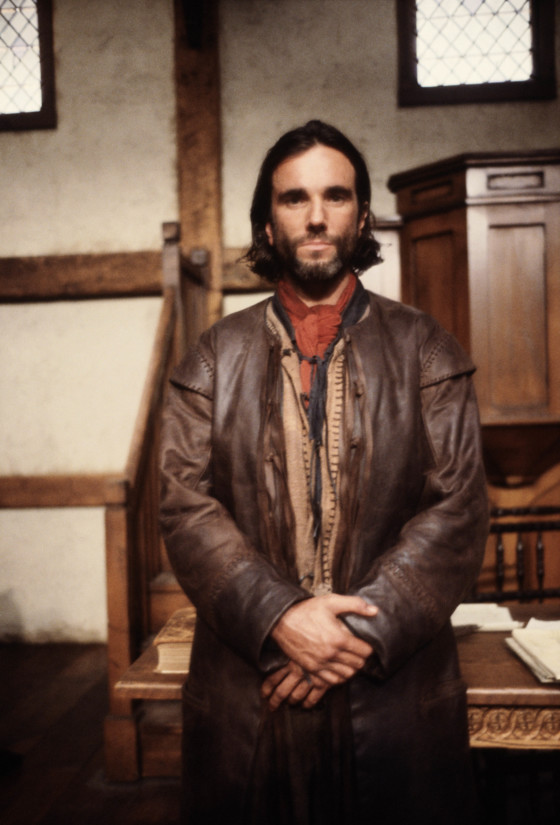 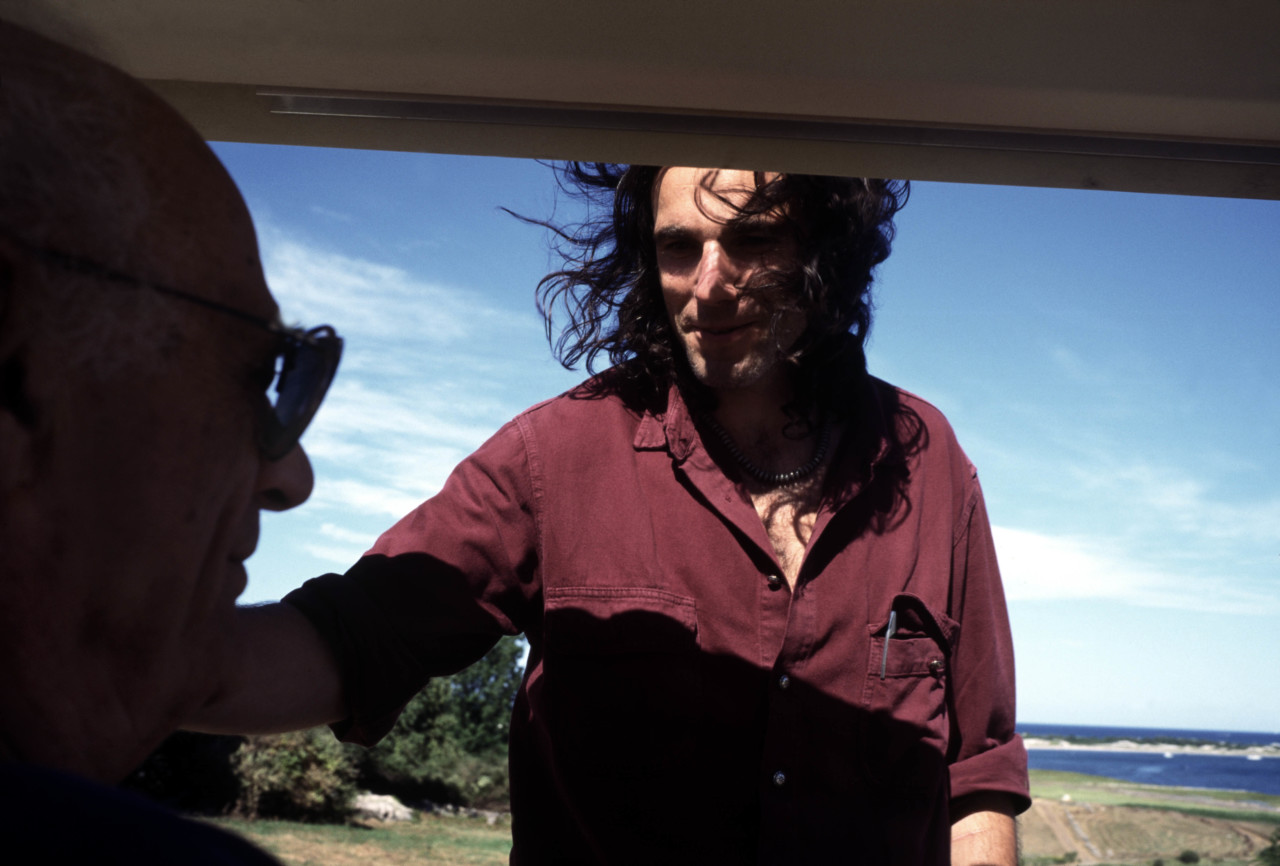 None was more devoted to the cause than Daniel Day-Lewis, that accomplished and unerring devotee of method acting. Day-Lewis arrived on Hog Island two months in advance of filming in order to help build his Puritan farmer’s home and familiarise himself with the lay of the land. He also eschewed the golf buggies used to take his fellow cast members to set, instead arriving by horseback each day. A number of compelling portraits by Morath convey his weather-beaten state, replete with tousled hair, mud-stained skin and clothes he appears to have slept in. 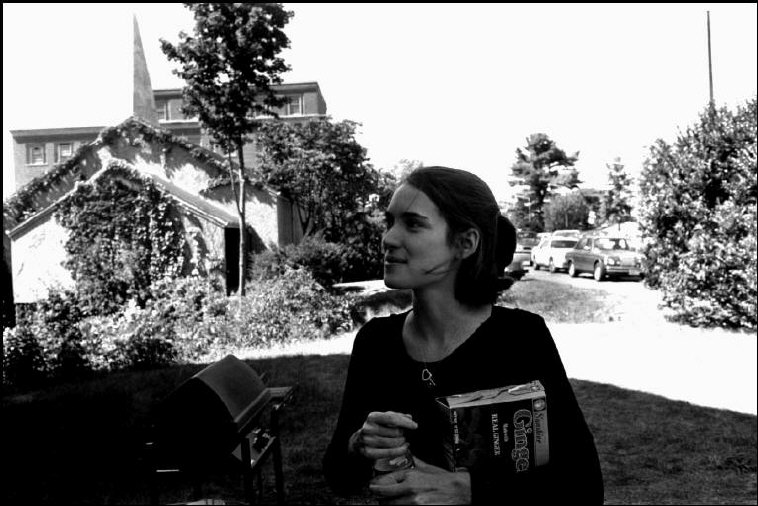 Day-Lewis’ performance, along with those of Ryder, Scofield and Allen, was widely praised upon the film’s release, in spite of its somewhat lacklustre reception at the box office. Miller, on his part, was nominated for an Oscar for best adapted screenplay, and the production ended up being the last of his works to be realised as a film. Happily, in stark contrast to its subject matter, Morath’s photographs reveal The Crucible’s realisation to have been a warm, familial experience among a group of dramatic virtuosos (in fact, Day-Lewis joined the Miller family in earnest when he married the couple’s daughter, Rebecca, that same year), which undoubtedly accounts for its spellbinding power, undampened over 20 years on.