Mark Power Memorial to Peter Fechter, one of the first victims of the Berlin Wall's border guards, killed while trying to escape to the West on 17 August 1962. The memorial reads: ' "Help Me" the 18-year-old (...)
young man cried. For 50 minutes he had been lying there bleeding to death, without medical assistance, and without the guards leaving their hiding-places. Risking their lives, West Berlin policemen tried to throw first-aid packets to him. But he was too weak. He was dying when he was at last carried away'. The Fall of the Berlin Wall. West Berlin. Germany. November 14th 1989. © Mark Power | Magnum Photos

Mark Power’s book Die Mauer ist Weg! (The Wall is Gone!) presents photographs from the night of November 9, 1989, the first time that Berliners were allowed free passage between East and West Germany since 1961, when the Berlin Wall had been erected. The book then follows the dismantling of the wall in the ensuing days, the euphoria of the citizens who rushed to cross over, and a desolate view of East Berlin in the immediate aftermath.

To mark the 30th anniversary of the fall of the Berlin wall, we share Mark Power’s images alongside his original introductory text from the book, in which he recounts the unlikely events that led him to photograph the historic events. Power’s video of the work is also included below, featuring a wider selection of the work. 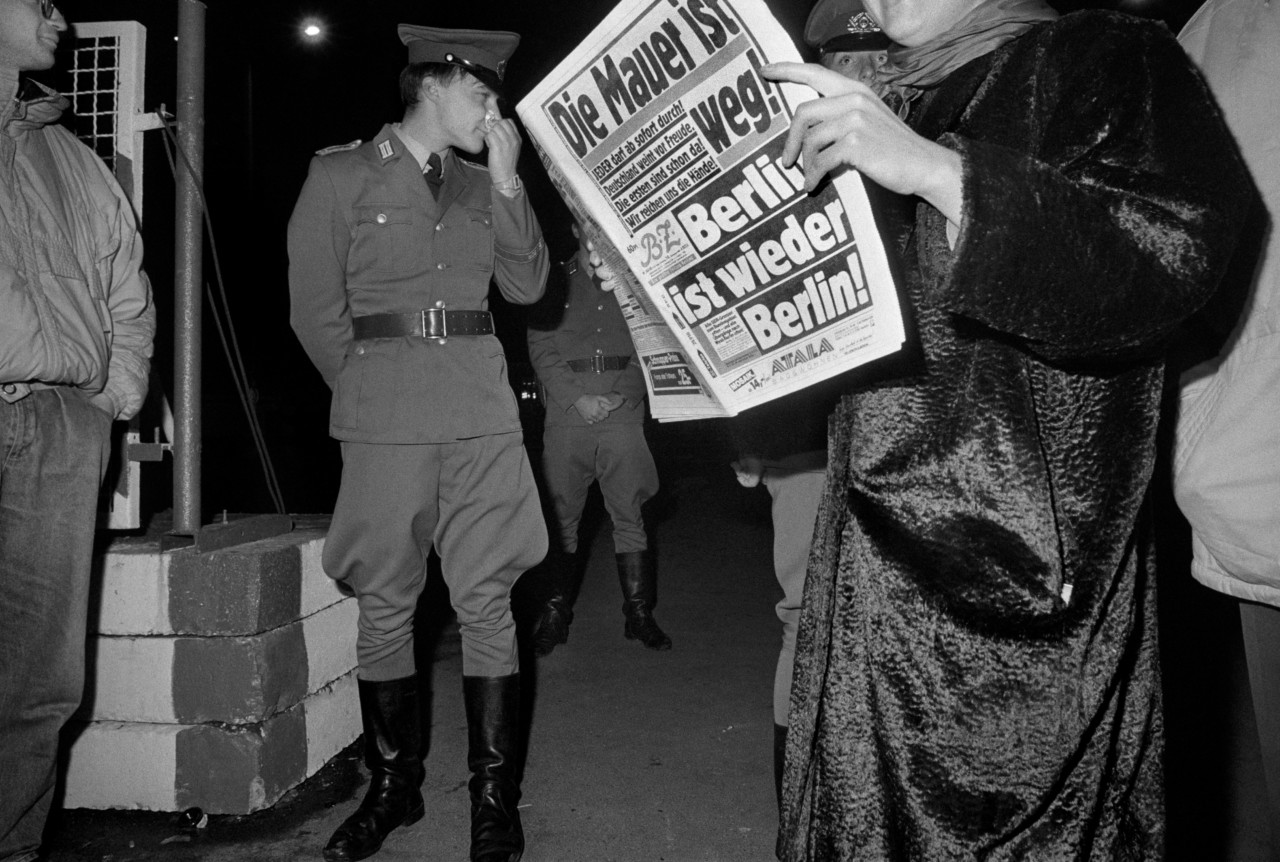 Fortune can, for her pleasure, fools advance,
And toss them on the wheels of chance.
(Juvenal 55-127 AD)

At the end of the 1980s I was deeply disillusioned and seriously in debt. I’d believed photography could make a difference, and for five years I’d been making (albeit quite traditional) social documentary work about Britain’s poor and underprivileged.

In those days photography galleries were few and far between and photobooks relatively rare. The traditional vehicles for documentary work were still the weekly magazines, but at the height of Thatcherism the press was in the pockets of the advertising industry: overtly political photographs, especially of a left-wing persuasion, were rarely seen alongside expensive ad-campaigns. In short, my so-called career was heading backwards at an alarming rate, and I found myself facing a court appearance for crippling credit card bills.

Faced with no other option, I decided to stop trying to make any sort of living as a photographer and made enquiries about training to be a carpenter instead. Quite by chance, an old acquaintance and picture editor for a prominent lifestyle magazine heard this news, took me to lunch and – while assuring me he believed in what I’d been trying to do – opened his wallet and gave me £200 in cash. ‘Take this’, he added, ‘and have one last go.’ And so, together with my friend George (who was already a carpenter) we bought tickets to Berlin, £99 with British Airways, departing early afternoon of November 9th 1989.

I’d just started courting with Jo, a young woman with extended family in East Germany, (and who, by the way, I’m still with these 25 years later). I had a crackpot idea that – armed with these handy contacts – I’d somehow get myself over the border and make some work about life on the Eastern Bloc. At least that was the plan. We arrived in West Berlin, booked into the youth hostel, and went out for a walk…

There were more people than one might have expected hanging around Checkpoint Charlie and I asked one of them, hands deep in his pockets against the increasing chill, why this was. He’d seen, he told us, a news bulletin claiming the Wall would be open for free passage from the DDR that very evening. Incredulous, George and I made a quick decision: we pooled our dwindling resources, got a taxi back to the hostel, collected all the camera equipment and every roll of film we had, and hurried back. 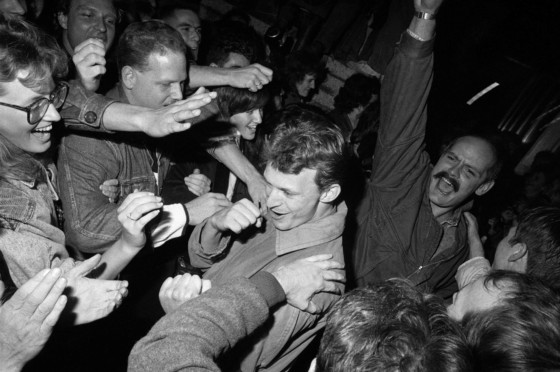 Mark Power Crowds during the imediate aftermath of the opening of the Berlin wall at midnight on the 9th November 1989. Berlin. Germany. © Mark Power | Magnum Photos Mark Power East Berliners crossing into the West, in the immediate aftermath of the opening of the Berlin Wall at Checkpoint Charlie at midnight on November 9th 1989. The Fall of the Berlin Wall. West Berlin. (...)
Germany. © Mark Power | Magnum Photos

"Incredibly, not only were we at the front, but at the right part of the front." 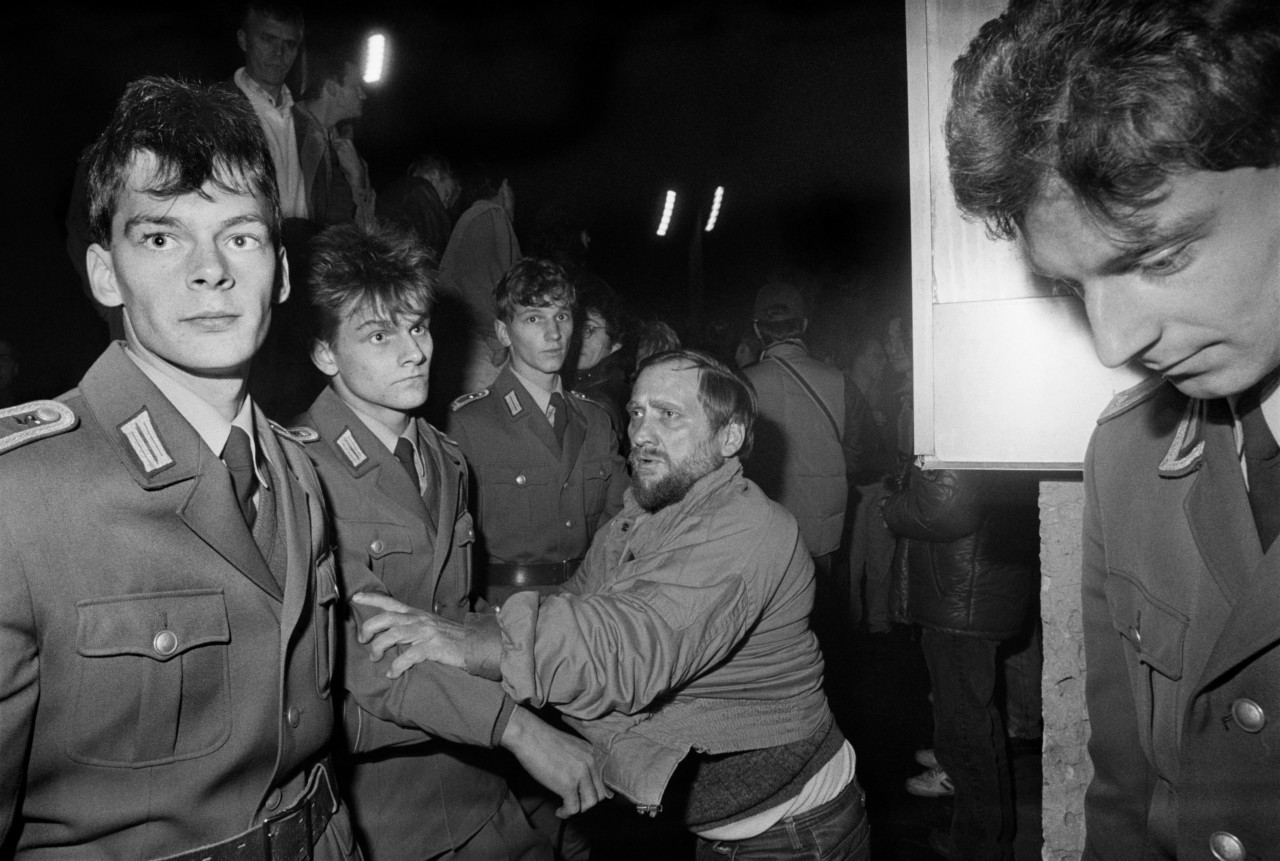 Mark Power Border guards stand aside to welcome East Berliner's crossing into the West, in the immediate aftermath of the opening of the Berlin Wall at Checkpoint Charlie at midnight on November 9th 1989. The (...)
Fall of the Berlin Wall. West Berlin. Germany. © Mark Power | Magnum Photos

The crowds, and the rumours, had swollen. We pushed our way to the front, to a line stretching from left to right across the road. The excitement was building steadily: tentative murmurs became confident babble and deafening chants. A border guard climbed onto a brick wall and appealed for calm. Then, at midnight precisely, the door in front of us opened and a bewildered looking East German appeared, promptly giving George a bear-hug. Incredibly, not only were we at the front, but at the right part of the front. I was pushed through the door by the heaving crowds to find myself in no-mans land alongside a small group of confused guards, apparently unable to believe the orders they’d been given. An endless stream of people stumbled by, pausing in bewilderment at the doorway, before passing joyfully west into the arms of the masses beyond. I had a strange feeling of crashing a party I hadn’t been invited to. 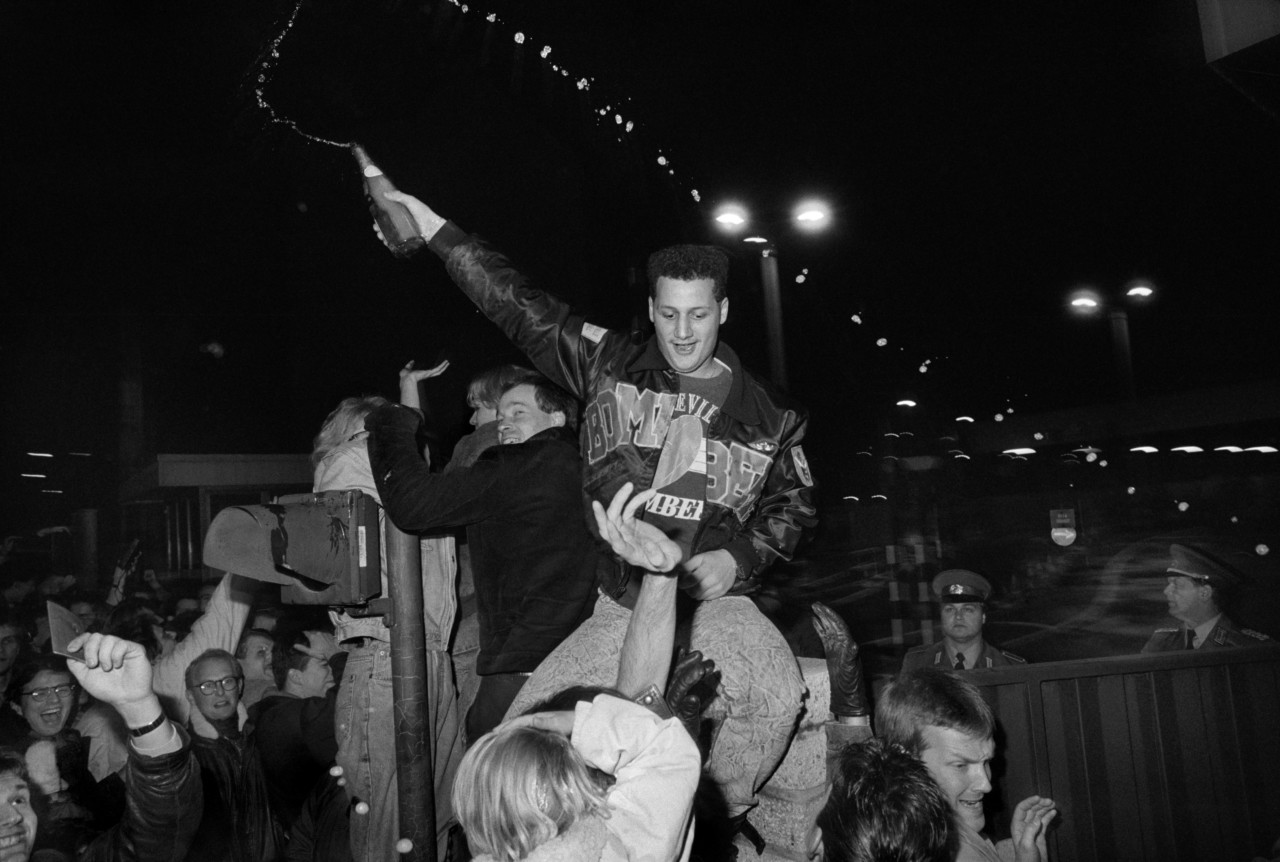 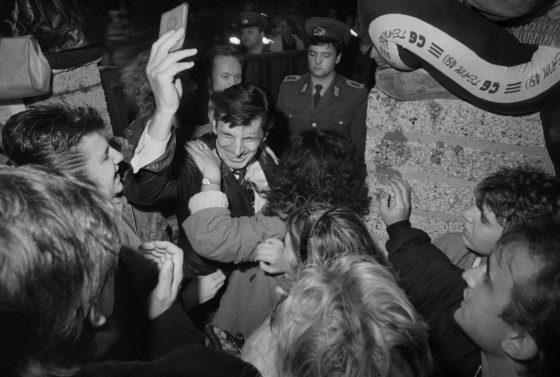 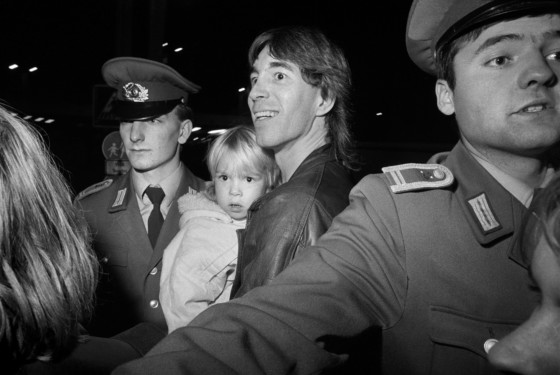 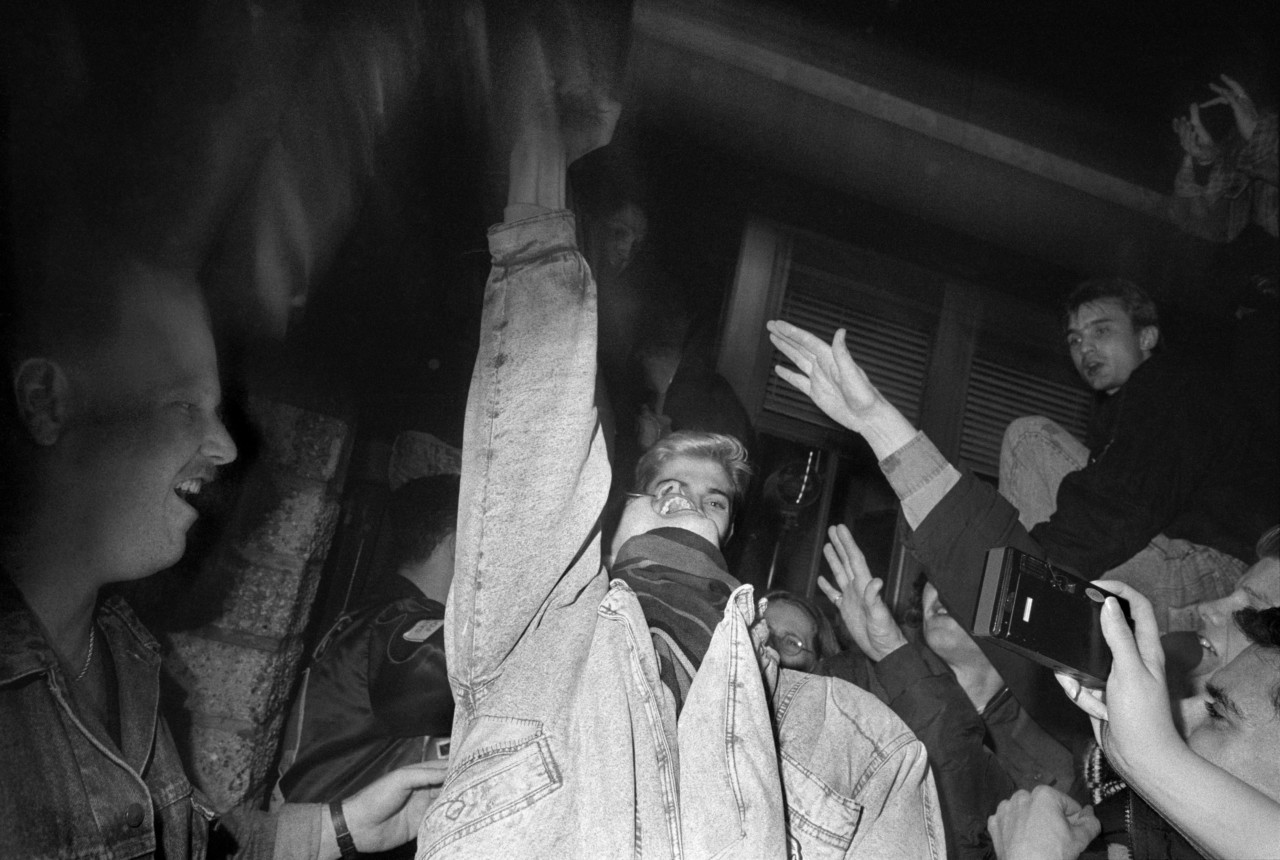 Mark Power GERMANY. West Berlin. The Fall of the Berlin Wall. East Berliner's crossing into the West, in the immediate aftermath of the opening of the Berlin Wall at Checkpoint Charlie at midnight on November (...)
9th 1989. © Mark Power | Magnum Photos

I was trying (and failing) to comprehend the enormity of what I was witnessing. Colleagues who have found themselves at other significant events tell me they’ve had a similar experience; it’s only afterwards – sometimes several days later – that it begins to sink in. yet I knew I was privileged to be there. These days, of course, thousands of pictures would appear instantly on social media, but in that pre-internet age a photographer was still something of a rarity. I worked in a frenzy, knowing I had a job to do.

And so, by accident, I’d become a news photographer. At 6am we made our way back to the Youth Hostel to find a number of bleary-eyed youngsters, just out of bed, who had missed the whole thing. The receptionist presented me with a number of urgent messages from Stephen Mayes, then Director of Network Photographers, the London-based agency I’d joined three years before. ‘Were you there? Did you take pictures?’ each one asked, more or less. I called a relieved Stephen from a public phone, and he promptly organized a courier to get our films home. Whilst still in the air they were sold to the highest bidder, a prominent British newspaper. Sadly, the negatives were processed so badly – treated, I suppose, as nothing more than tomorrow’s fish and chip paper – that many are now discoloured and faded, much like my own memory. 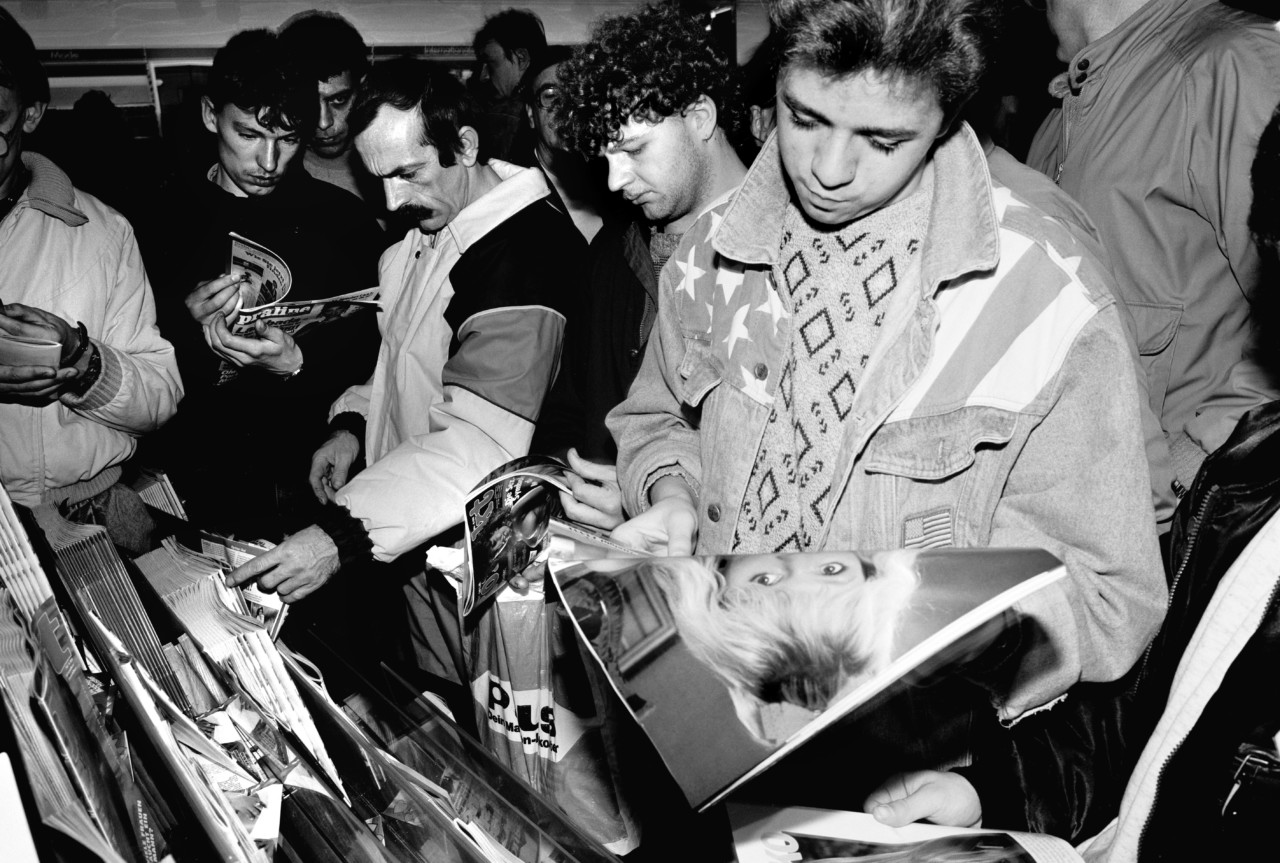 "And so, by accident, I’d become a news photographer. " 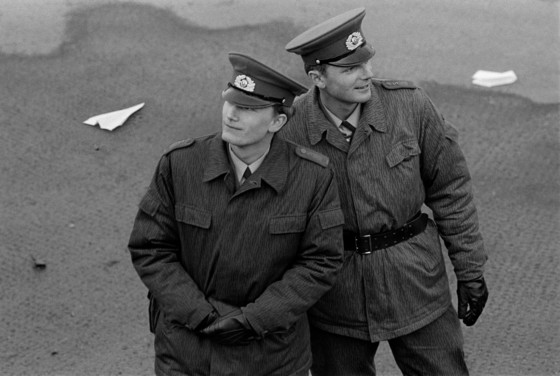 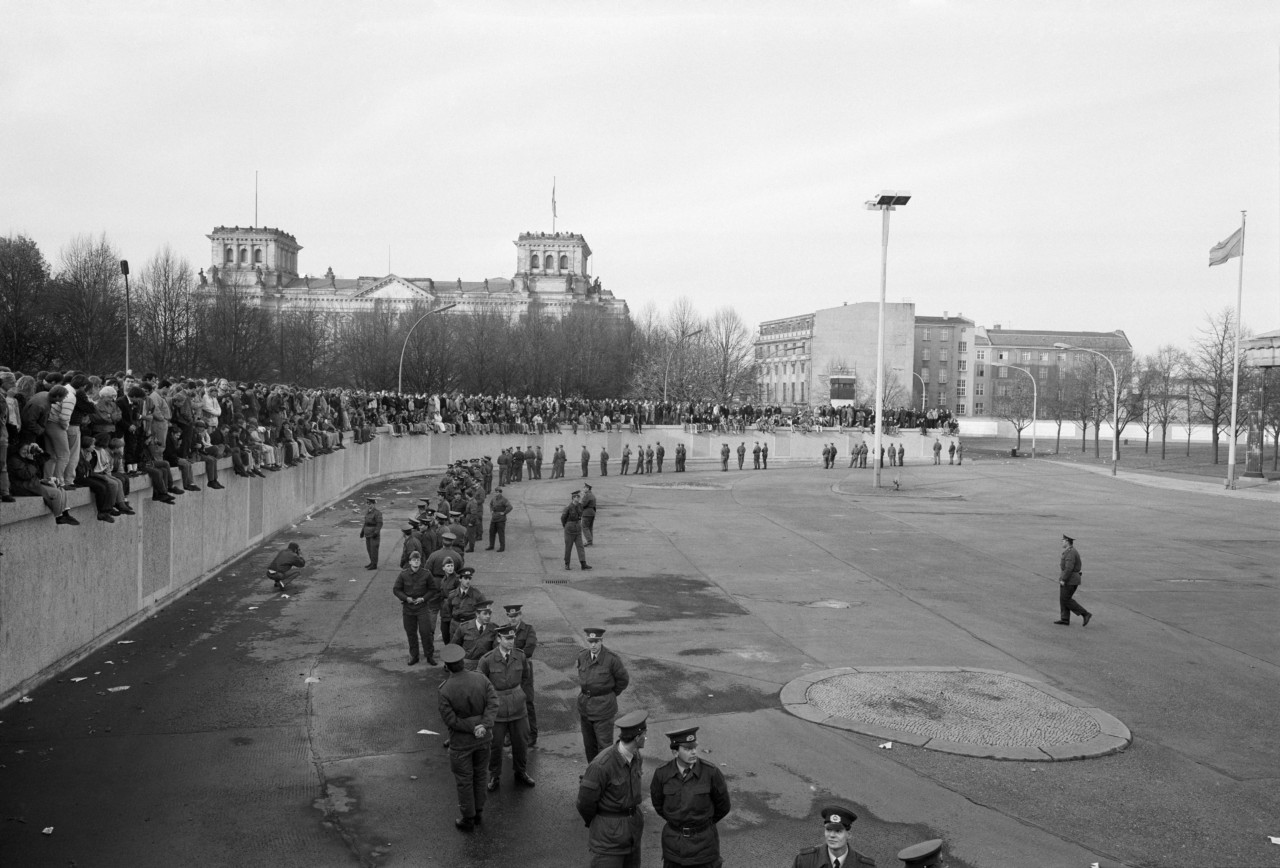 "...the negatives were processed so badly – treated, I suppose, as nothing more than tomorrow’s fish and chip paper – that many are now discoloured and faded, much like my own memory." 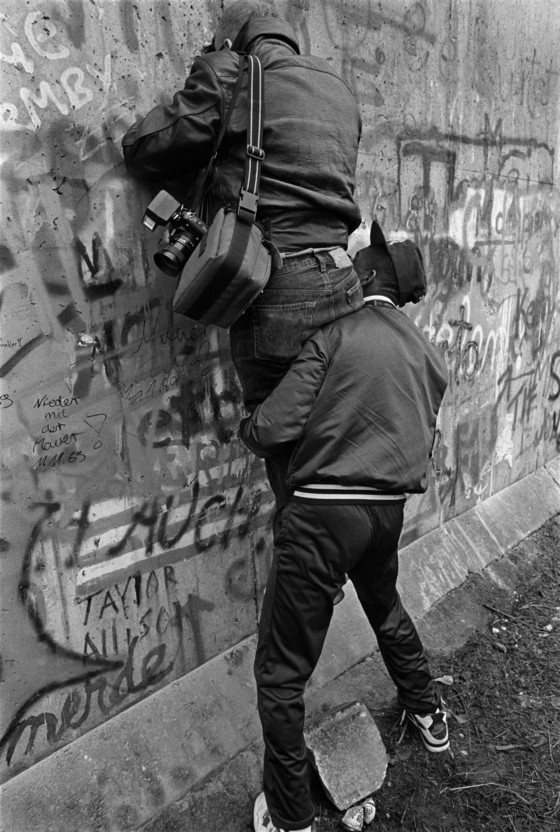 The next day, after a short sleep, I took more pictures, but less energetically now. My film stock was running low and there wasn’t a single roll to be found anywhere in Berlin. The world’s press had arrived and great gantries were swiftly constructed to improve their view. Hundreds of people sat astride, or stood upon, the Wall, while bulldozers knocked down particularly significant sections. Most of my day was spent missing a lot of good pictures.

On the 12th George and I headed over the border, but not quite as originally planned. East Berlin, apart from the queues at Freidrichstrasse railway station, was virtually deserted. Almost everyone had gone the other way, leaving behind a strange, desolate landscape. 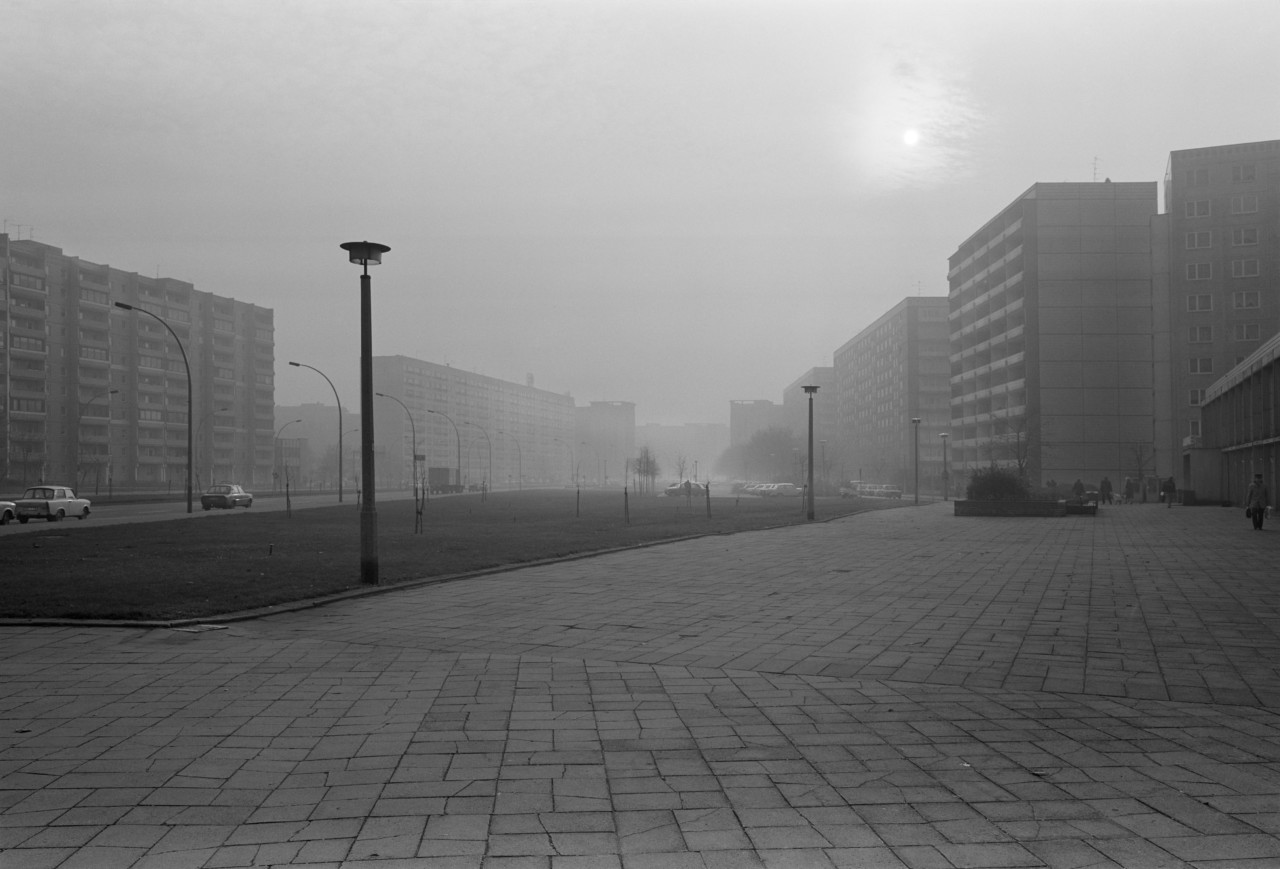 That day, it turns out, was personally significant. Why, I remember thinking at the time, was I so keen to retreat from the epicentre of the event and decamp to a place where nothing seemed to be happening at all? Was I afraid of failure, of not doing a ‘good job’? The massed ranks of press photographers now at the Wall had certainly given me an excuse to go searching for an alternative viewpoint but I knew, even then, I was more interested in the fringes of the story. In such places time seems to move more slowly, yet the reverberations penetrate just as deep. 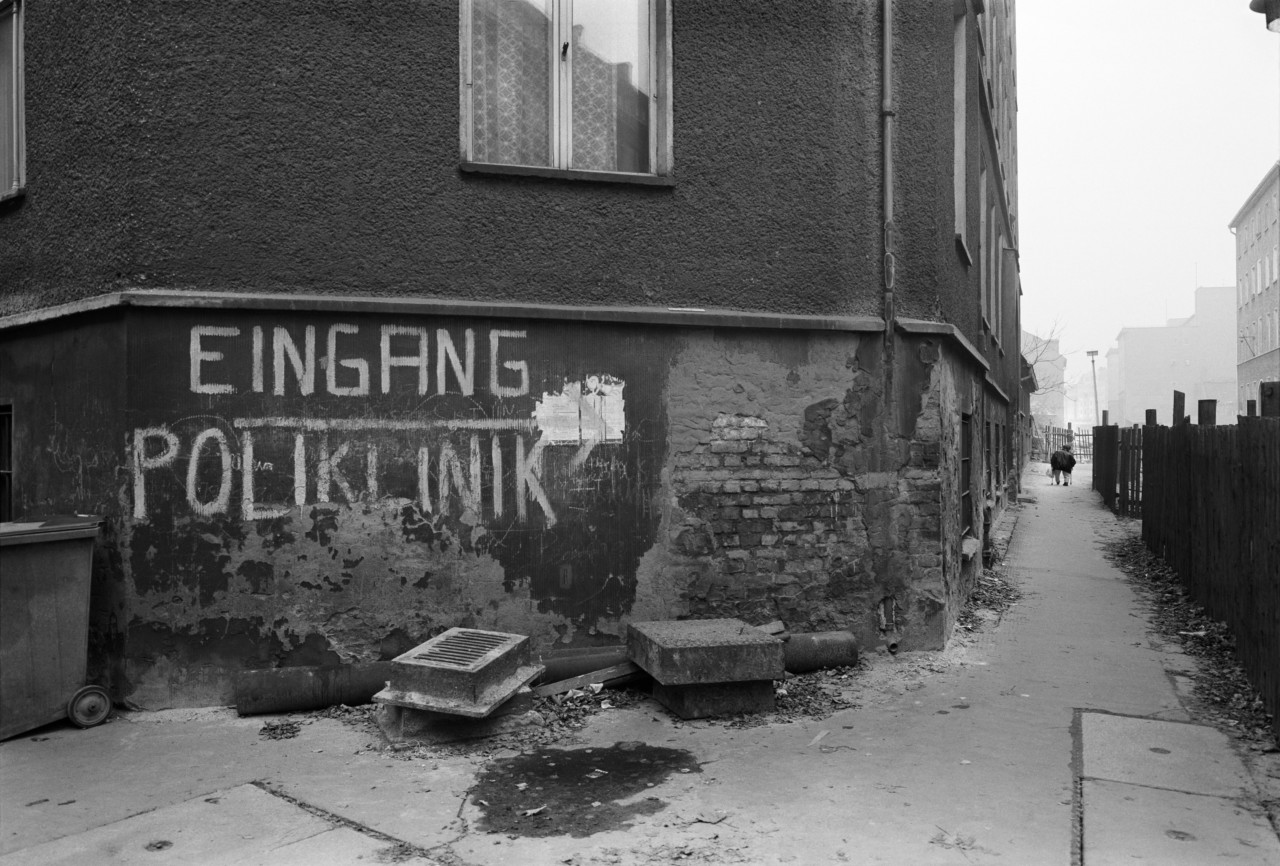 We chanced upon a Trotting event – a genteel form of chariot racing – and went inside to watch. Later, we passed the Pergamon Museum and decided to go in there as well, discovering a small group of amateur critics lost in the art of the past rather than the politics of the present (which I liked) Finally, for some inexplicable reason, we went in search of Bertolt Brecht’s grave – another good example of why I’ll never make a decent journalist. 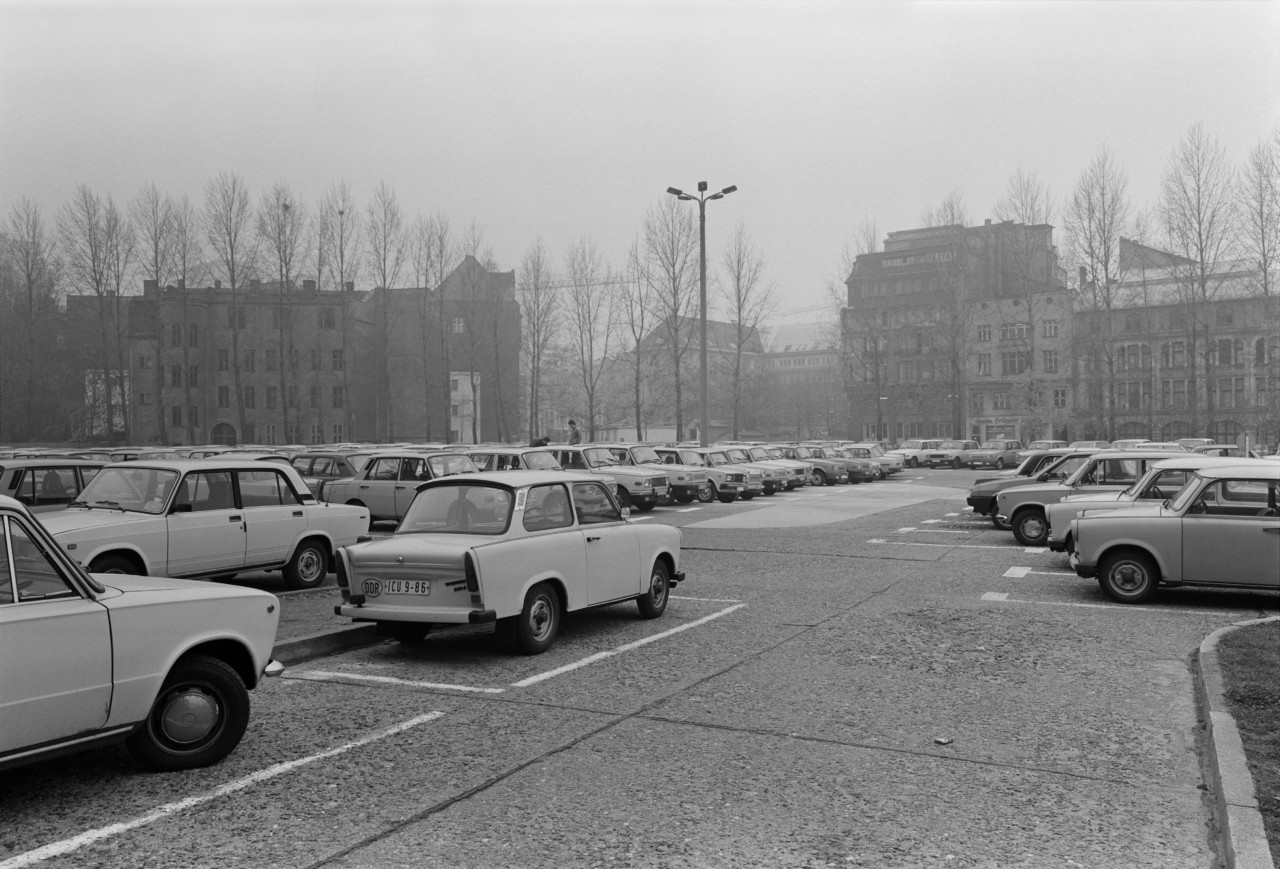 That said, the newspaper sale (and many others that followed) cleared my debts and I suddenly found myself in demand; I spent the next three years working for numerous magazines and papers before becoming disillusioned with that world too. I started teaching and, I like to think, became a better photographer because of it.

‘Chance’, Louis Pasteur once wrote, ‘favours only the prepared mind’. But whatever it was, serendipity or just good fortune, that gift of £200 could well be why I’m still making photographs and not (probably very bad) furniture. "Almost everyone had gone the other way, leaving behind a strange, desolate landscape." 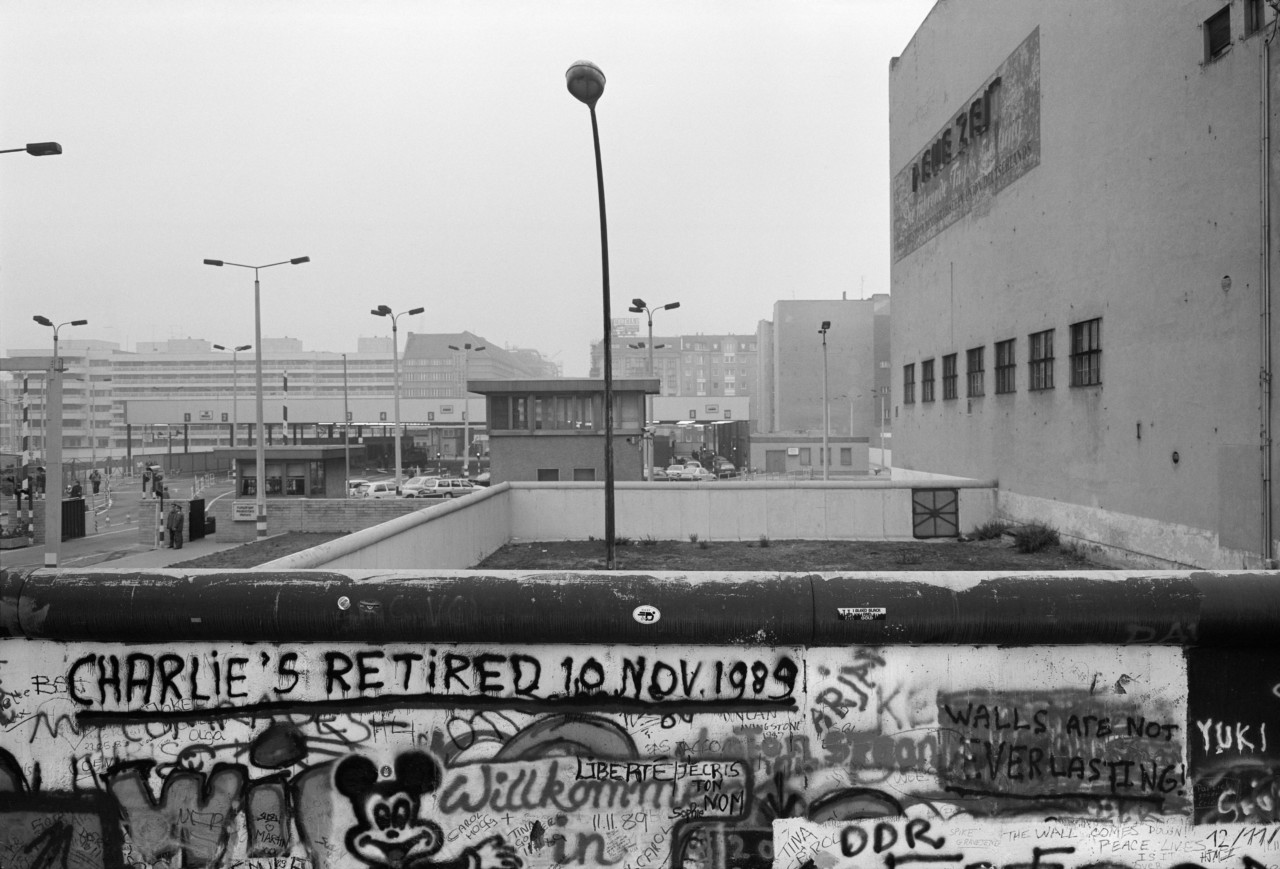 "I knew, even then, I was more interested in the fringes of the story. In such places time seems to move more slowly, yet the reverberations penetrate just as deep."