Thomas Hoepker’s vision of East Germany, from the early years of the Berlin Wall to its fall 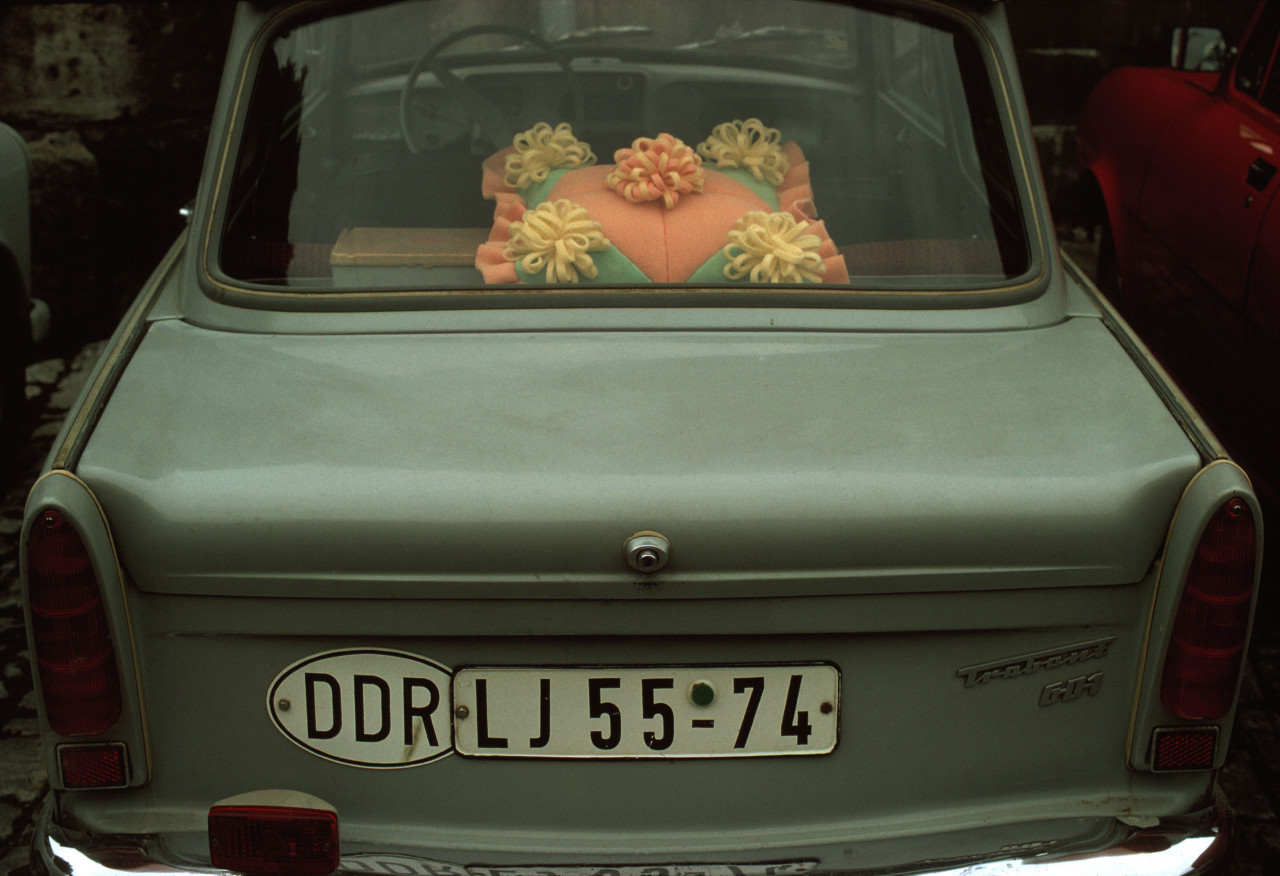 Today marks the 70th anniversary of the formal division of Germany, and the founding of the German Democratic Republic (GDR), known in German as the Deutsche Demokratische Republik, or DDR, most commonly referred to in the West as ‘East Germany’.

On October 7, 1949, the Eastern part of the nation – including Berlin (though the city’s Western half remained part of the Federal Republic) – fell firmly under Soviet Russian influence. Over the ensuing decades the DDR years became increasingly isolated from the rest of Europe. Perhaps the most famous, and most visual embodiment of this cultural divide was the physical division of Berlin by the construction, in 1961, of the Berlin Wall. Thomas Hoepker A child playing by the Berlin Wall. The latin words 'In Tyrannos' has been written in capital letters on the Wall. West-Berlin, Germany. 1963. © Thomas Hoepker | Magnum Photos

In the early 1970s, Magnum photographer Thomas Hoepker – who had at the time worked as a photojournalist for magazines such as Stern and Geo for a number of years – was accredited to work in the DDR along with his then-wife,  Eva Windmöller – a journalist who also worked for Stern.

“We took it for granted that our apartment was bugged, maybe even that our car was bugged. We had come there armed with lots of addresses and telephone numbers for relatives living in East Germany – and we called them up: ‘Surprise, surprise! We are now living in East Berlin. Why don’t you come by and we can talk a bit?’ There was zero enthusiasm…” Hoepker recalled in an interview with The Economist, in 2009, “Any East German who had any sort of important job was not meant to have what they called ‘a West contact’.”

The pair spent several years in the East, reporting on politics and everyday life. A selection of Hoepker’s photographs which span the early years of the wall’s construction, as well as his time living in the East, became the book – DDR Ansichten – Views of a Vanished Country.

Here we feature a selection of images from DDR Ansichten – Views of a Vanished Country, along with some of Hoepker’s thoughts and recollections of his time in the East, shared in the aforementioned interview with The Economist. 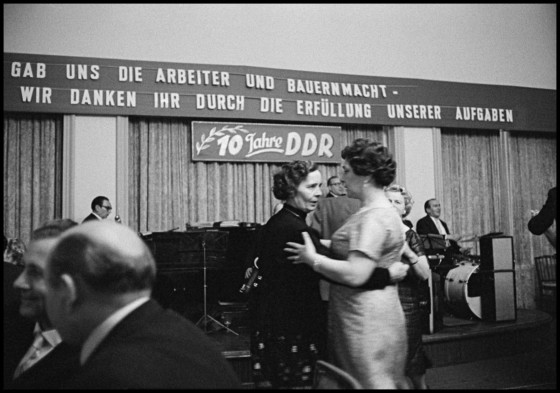 “I visited East Germany for the first time in 1959 – it was grey, crumbling, the only colour one saw was communist red”, remembers Hoepker. Indeed even at rallies there was, he felt, a lack of spontaneity – though the parties that followed such forced joviality were somewhat more relaxed, lubricated as they were by an “ample supply of beer and schnapps…” 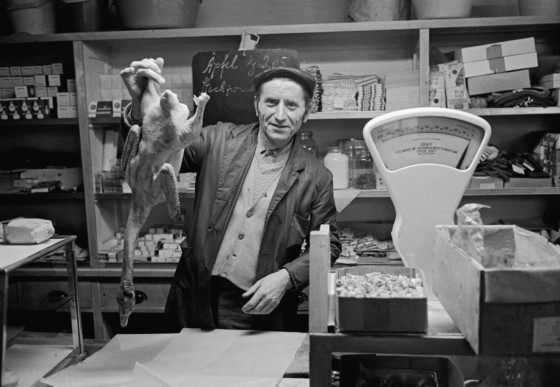 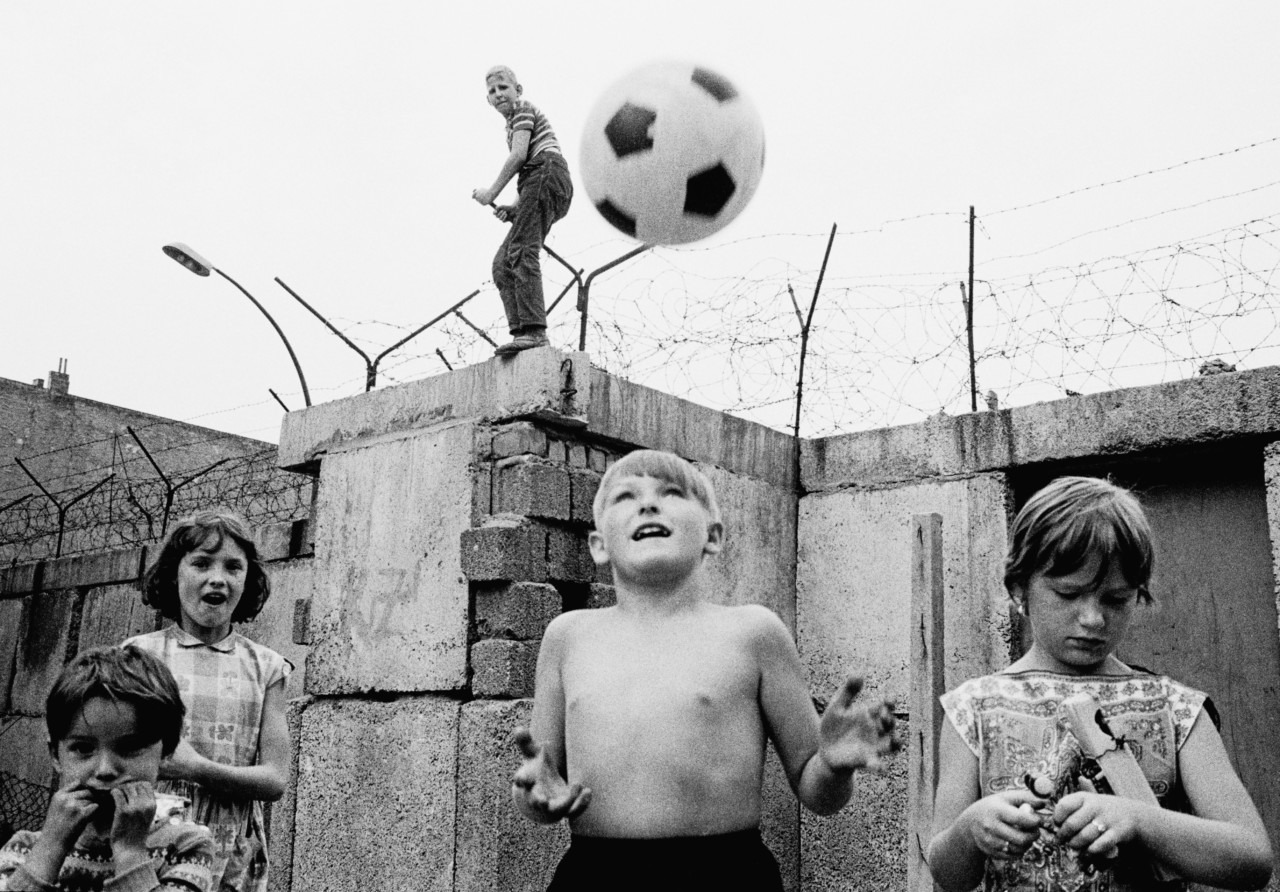 "Children were totally relaxed about this horrible edifice!" 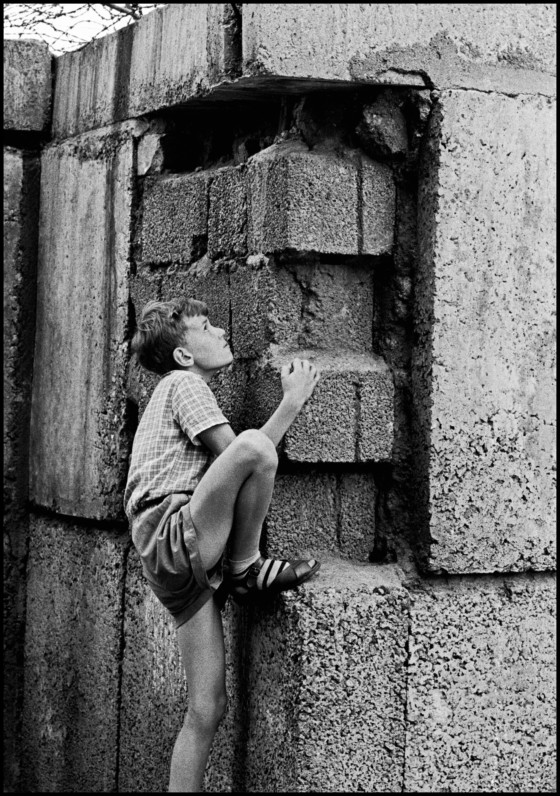 Thomas Hoepker A young boy playing with an East German border guard near a barbed wire fence along the border between East and West Berlin. The boy is looking through binoculars into the West. Berlin. Germany. 1963. © Thomas Hoepker | Magnum Photos

The East was suffering from a body, and brain-drain, “bleeding to death” as Hoepker puts it. The ebb of Easterners toward the West led to the construction in 1961 of the Berlin Wall, by the authorities of the DDR. This wall divided the city, and over time its degree of militarizaition increased to incorporate minefields, watchtowers, and heavily guarded checkpoints.

A few years after the wall’s completion Hoepker made a number of photographs of children playing along the wall as part of an editorial assignment. Expecting the wall to have been a source of fear or disturbance for such children, the photographer was shocked to discover that, “children were totally relaxed about this horrible edifice!” 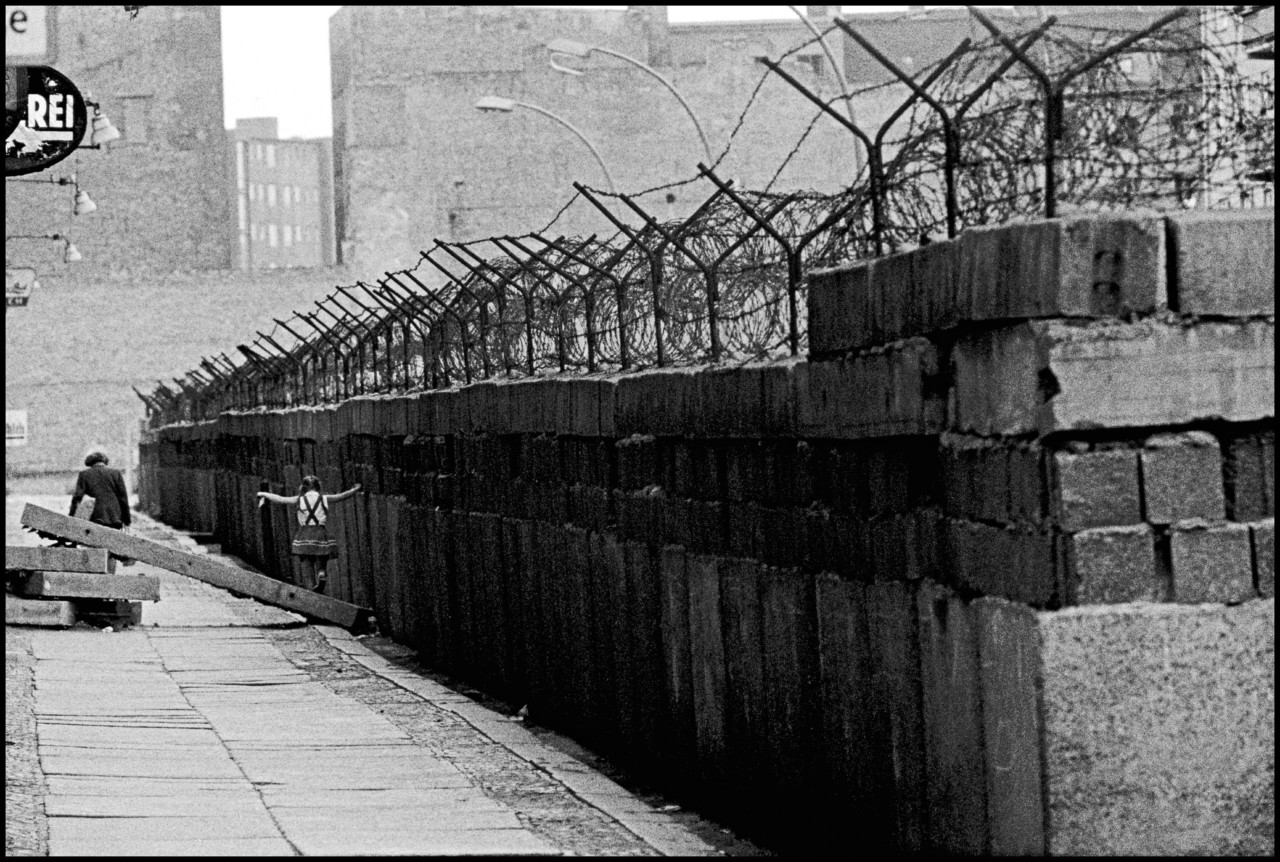 Hoepker also made a number of images at the Berlin Friedrichstraße station, a crossing point between the Eastern and Western sectors of the city. The station was dubbed ‘The Palace of Tears’, due to the regularity of emotional reunions that occurred in the locale. “The government in East Germany allowed people over 65 to travel to see their relatives in the West. They felt that if those people crossed over and then decided to stay in the West then they wouldn’t miss them much.” the photographers explained, “The reunion of these two brothers, who look so alike and were dressed so alike, was a very moving moment.” Friends and relatives in Berlin often found themselves living physically near one another, yet totally isolated without means of communication or freedom of movement. 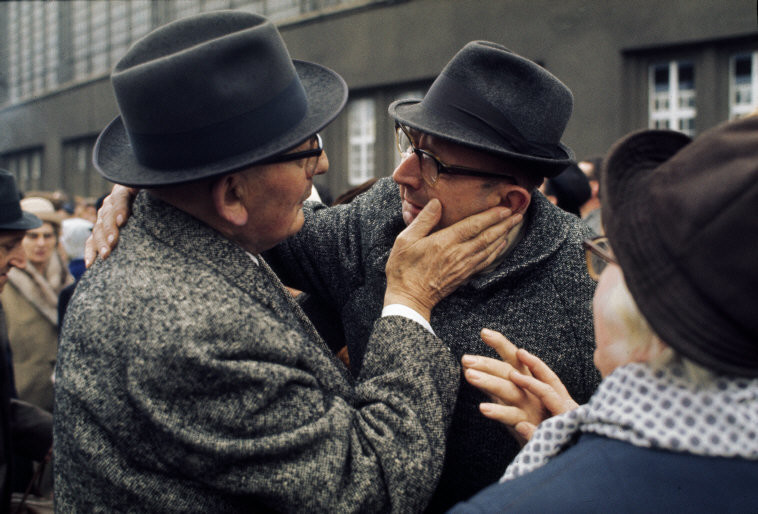 There were daily material privations in the East, as well as the restrictions upon movement and political freedom that its citizens endured. As Hoepker explains, “Everybody walking around in East Germany had a little bag, and they called it the ‘perhaps bag’. Perhaps you will find an orange or a banana, perhaps some chocolate…” A number of photographs in the book capture these ‘perhaps bags’, at times bulging with lucky finds, at others desultory and empty. 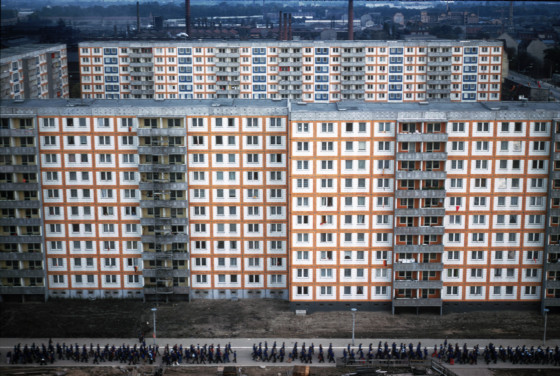 Hoepker also photographed official state-sponsored events, political rallies and governmental addresses. He is quick to underscore some of the lightheartedness in his photographs from the East with a serious note on the dangers the ruling party presented, “This country was run by very limited minds, but very shrewd minds. It was hard to understand that these very mediocre-looking people were ruling the country with an iron fist. They were very dangerous people indeed.” "Everything I had known was now topsy-turvy" Hoepker missed the fall of the Berlin Wall in 1989, being on assignment outside the country. But he returned in 1990 to witness the ongoing defacing of the monolith by Germans from East and West alike. “Everything I had known was now topsy-turvy. It had all changed. It was a joyous moment, but it was also clear it would be difficult for both Germanys to adapt to this new scenario.”

On reflecting on the failure of the East German – and ultimately the Soviet – state, Hoepker tempers the joy of reunification with a note of regret at the great disappointment and disaffection felt by many normal citizens, “Lenin, Stalin, and Honecker failed bitterly of course, and brutally. But in some aspects it was a dream that was shattered, so many believed in socialism for a while, and so many were disappointed.”