“I’m not a photojournalist” states Belgian Magnum photographer Harry Gruyaert – “my influences come from painting and cinema.” However, his color-soaked images of Las Vegas and Los Angeles in 1981 and Moscow in 1989 cannot help but reveal the signs of the times – images published in his new book East / West.

In following his intuition, Gruyaert finds himself drawn to documenting a “banality that is extremely interesting” – vistas rendered in brilliant Kodachrome of what was then, for the inhabitants of those places, just the backdrop to everyday live, but now, for outsiders, 30 years in the future, are cinematic visions of another world. “The genius of Cartier-Bresson is not only that his work is extremely well composed, ”  says Gruyaert, “but that it says a lot about the time and the place he photographed. ” 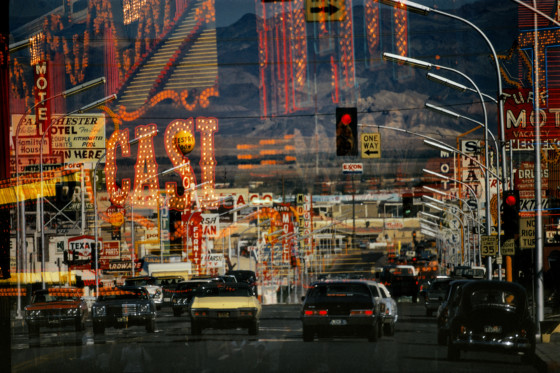 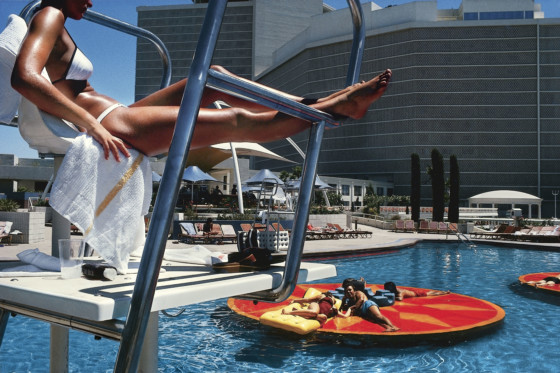 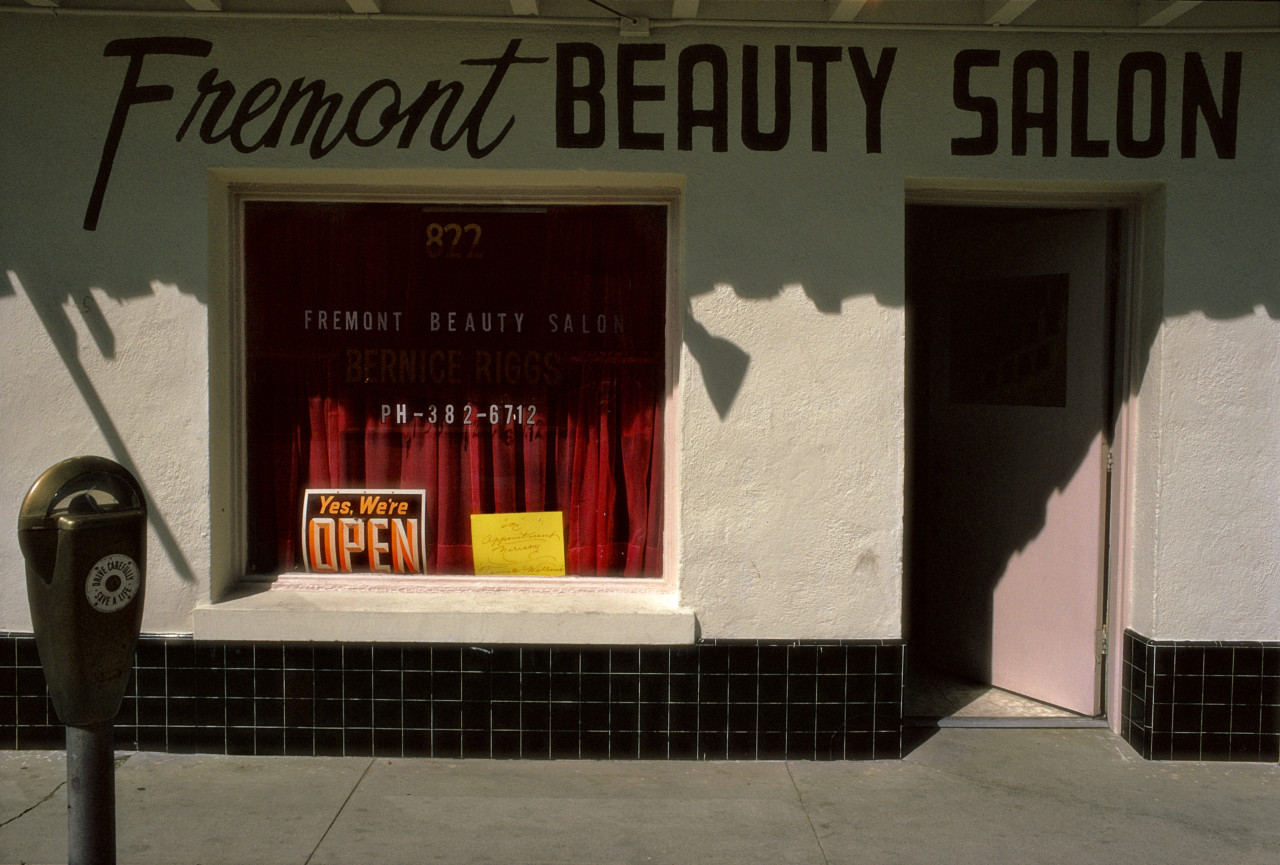 "I was excited visually but on a human level pretty sad"

Of Los Angeles and Las Vegas, though depicted in bright, cartoonish color, Gruyaert spoke about how he found them to be somewhat depressing. “I was excited visually but on a human level pretty sad, everything related to money. I found that extremely sad.” Very much like the sunny optimism of the American dream itself, there is a subtle discord in the work that indicates that all may not be as perfect as it first seems.

Tour de France: Inside the Peloton 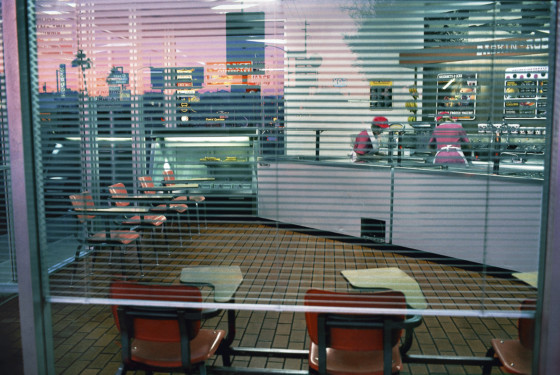 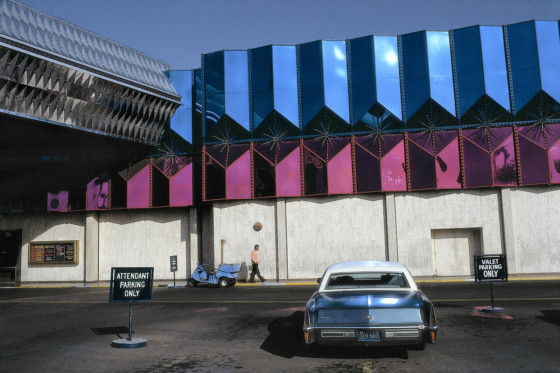 In an essay accompanying the book, David Campany, identifying this uneasiness writes: “Beyond the visual attraction, there is an unmistakable feeling of melancholy here, as there is in much in Gruyaert’s photography. And a sense of disappointment too. There is some kind of elegy, to a promise lost or squandered for the day’s distraction. A beautiful photography of loneliness or alienation can be redemptive but it never takes away the pain, and never overcomes the social realities. For all the delight that Gruyaert’s photographs offer us, for all the colorful joy, these are bittersweet depictions.”

Like the artist Gruyaert identifies as, for him, the moods of the two locations – American ambition skirting close to vice in LA and Las Vegas, and the transitioning of Moscow from austere iron curtain capital to international city – provided two distinct color swatches with which he could work. “It’s like being a painter, you have two different palettes,” he explained. 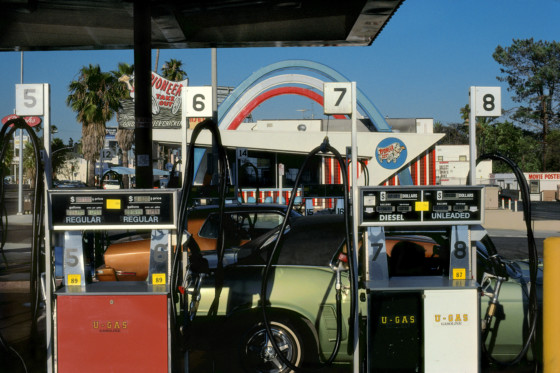 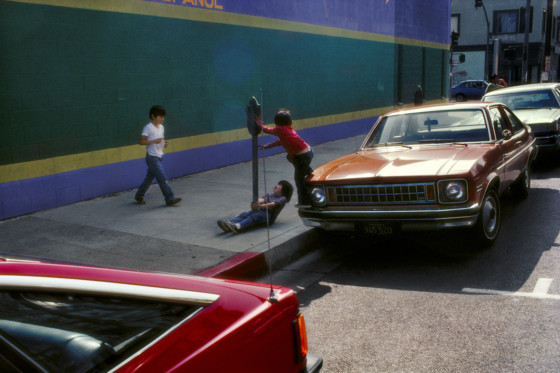 “What could be a greater color contrast than the super-saturation of California – the ‘West’ – and the drained palette of an exhausted Soviet Union – the ‘East’?” questions David Campany.

One of several photographers to accept an invitation to photograph Moscow as part of an exchange program that would later see Soviet photographers visit France, Gruyaert visited Moscow in 1989, along with his friend and fellow Magnum photographer Josef Koudelka. It was Gruyaert’s first visit behind the iron curtain, and Koudelka’s first since leaving Czechoslovakia in 1968. A new Magnum photographer, the Russian Gueorgui Pinkhassov, was also present. The loose project began in late April, stretching over the traditional May Day festivities. 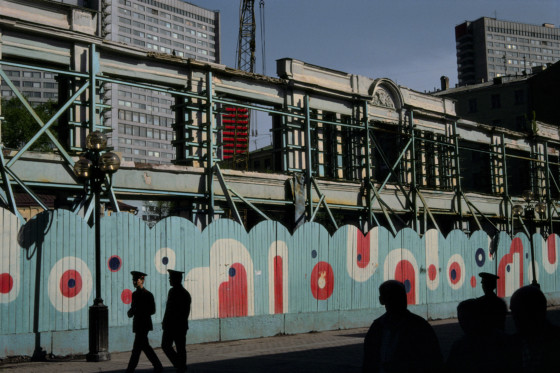 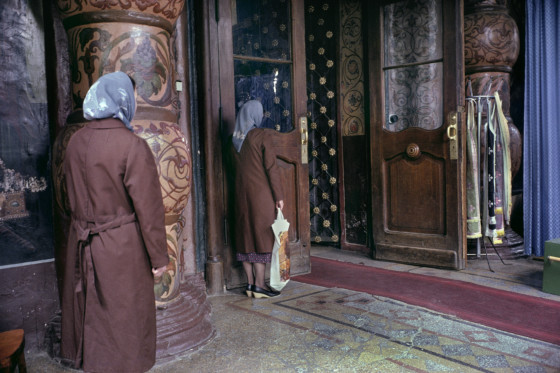 "What could be a greater color contrast than the super-saturation of California – the ‘West’ – and the drained palette of an exhausted Soviet Union – the ‘East’?"

In contrast to capitalist America, Moscow was starker visually, but the mood was much more welcoming: “It was extremely exciting, everything was falling to pieces – it was extremely open. It was an amazing time,” remembers Gruyaert. Despite its more austere palette, Moscow is somehow rendered more welcoming, and yet the loneliness that permeated the American work is present in the post-Soviet study too.

“Gruyaert’s framing and timing lend these groups some kind of unified consciousness. But, as in Los Angeles and Las Vegas, the feeling of isolation is pervasive. The camera catches individuals passing, negating each other’s presence without fully engaging. As they sit on park benches or lean on walls, their gazes slide past, never quite making eye contact, trapped in a predicament of history,”  writes Campany. 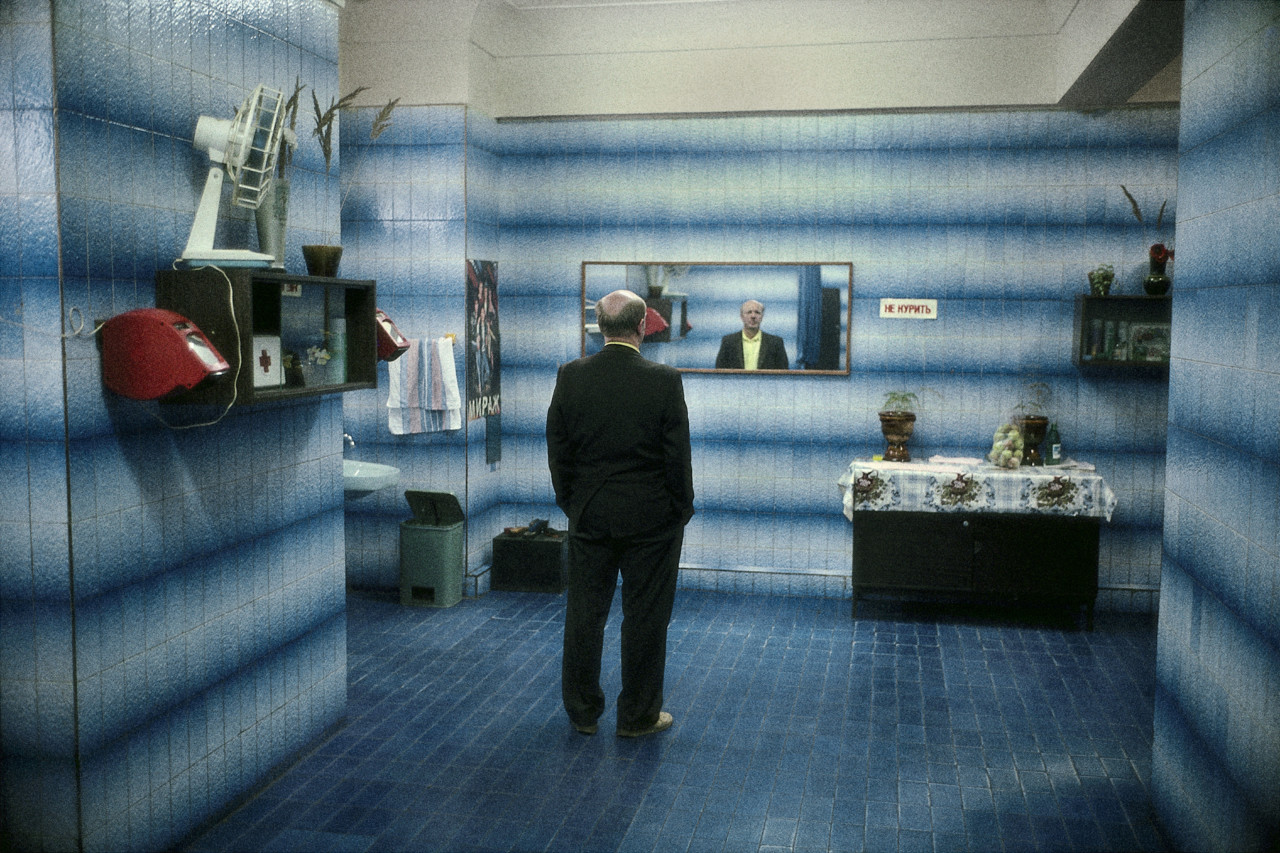 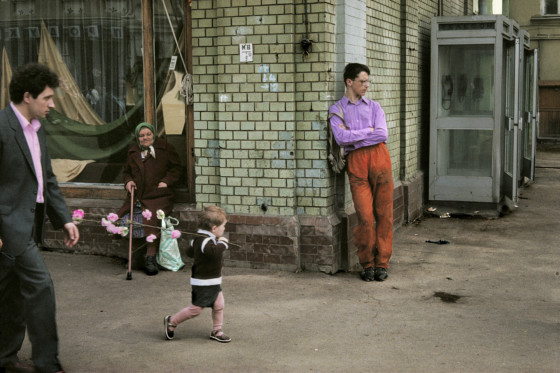 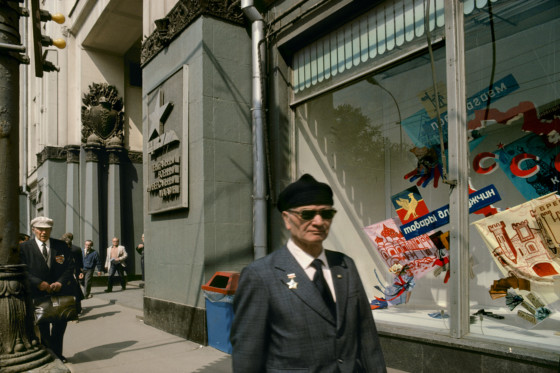 Although the work serves to document the nuances of a particular time and place, in making it, Gruyaert took hundreds of images, without thinking at all about how they might eventually end up being used, either then or decades into the future.

The initial intention was, in fact, for a magazine feature, but the huge volume of material created means that the work can now be reimagined as a double-duty book, featuring images not published before – two books presented together as one tome. 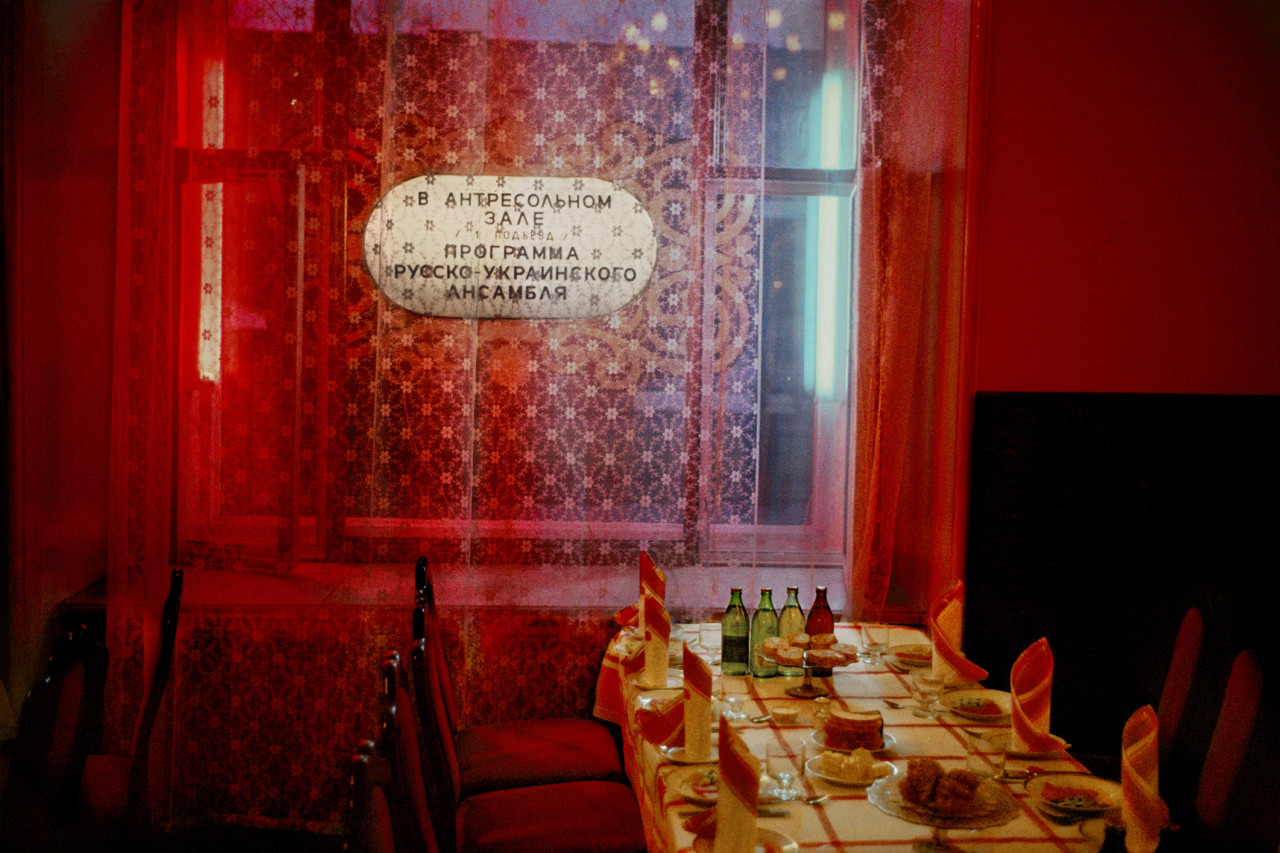 “I just want to be completely open and not think about how things are going to be used,” Gruyaert explained, discussing how his treasure trove of material was re-edited into the book East / West.

“It’s very good to let things lie in a corner for many years and then go into it again. You can do a much better job in editing. And the printing is a much better job than I could have done 30 years ago,” he says.

East / West is available signed by Harry Gruyaert on the Magnum shop.