The legendary photo editor and former Executive Editor of Magnum Photos has died in Paris, aged 100 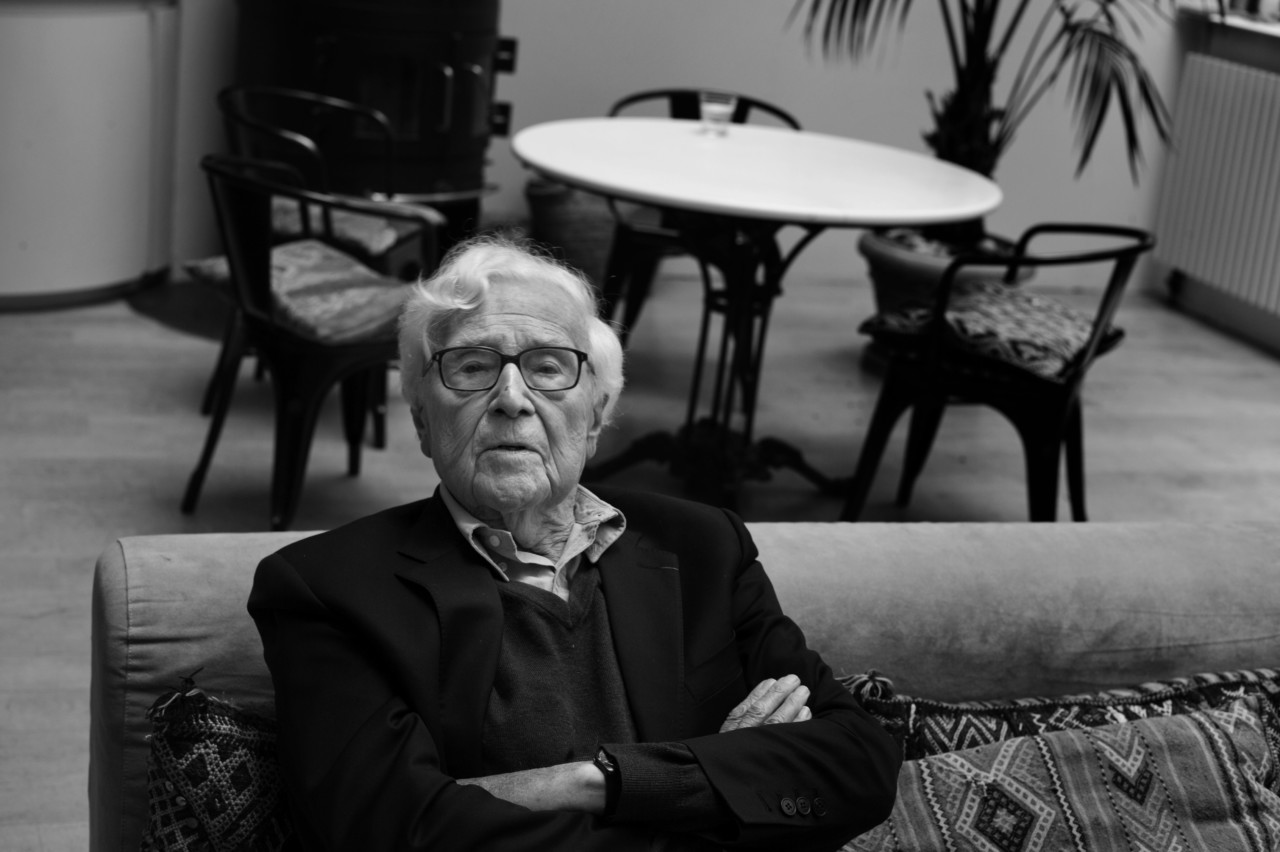 John Morris, the photo editor responsible for the commissioning and publishing of some of the most iconic photographs of the 20th century, and whose lifelong commitment to visual storytelling has shaped the history of photojournalism, died on Friday, July 28, 2017, at a hospital near his home in Paris. He was 100.

John Morris called Magnum co-founder Robert Capa his Hungarian brother. The photographer sent his unprocessed film of the D-Day landings to Morris, his editor at LIFE magazine, who oversaw the publication of 11 images from the event. American-born Morris worked as London’s photo editor for the weekly picture magazine throughout WW2, commissioning photo reportage from the war front.

After the war, he became the picture editor of U.S. monthly Ladies’ Home Journal, where he sent Robert Capa and John Steinbeck on assignment to Russia, the genesis of the famous tome Russian Journal. He then became Executive Editor of Magnum Photos, dispatching the agency’s photographers across the globe to cover the stories that mattered most and working closely with each to develop their practice. This tenure was followed by leading photographic roles at The Washington Post and The New York Times, as well as going on to work as the European correspondent of National Geographic. 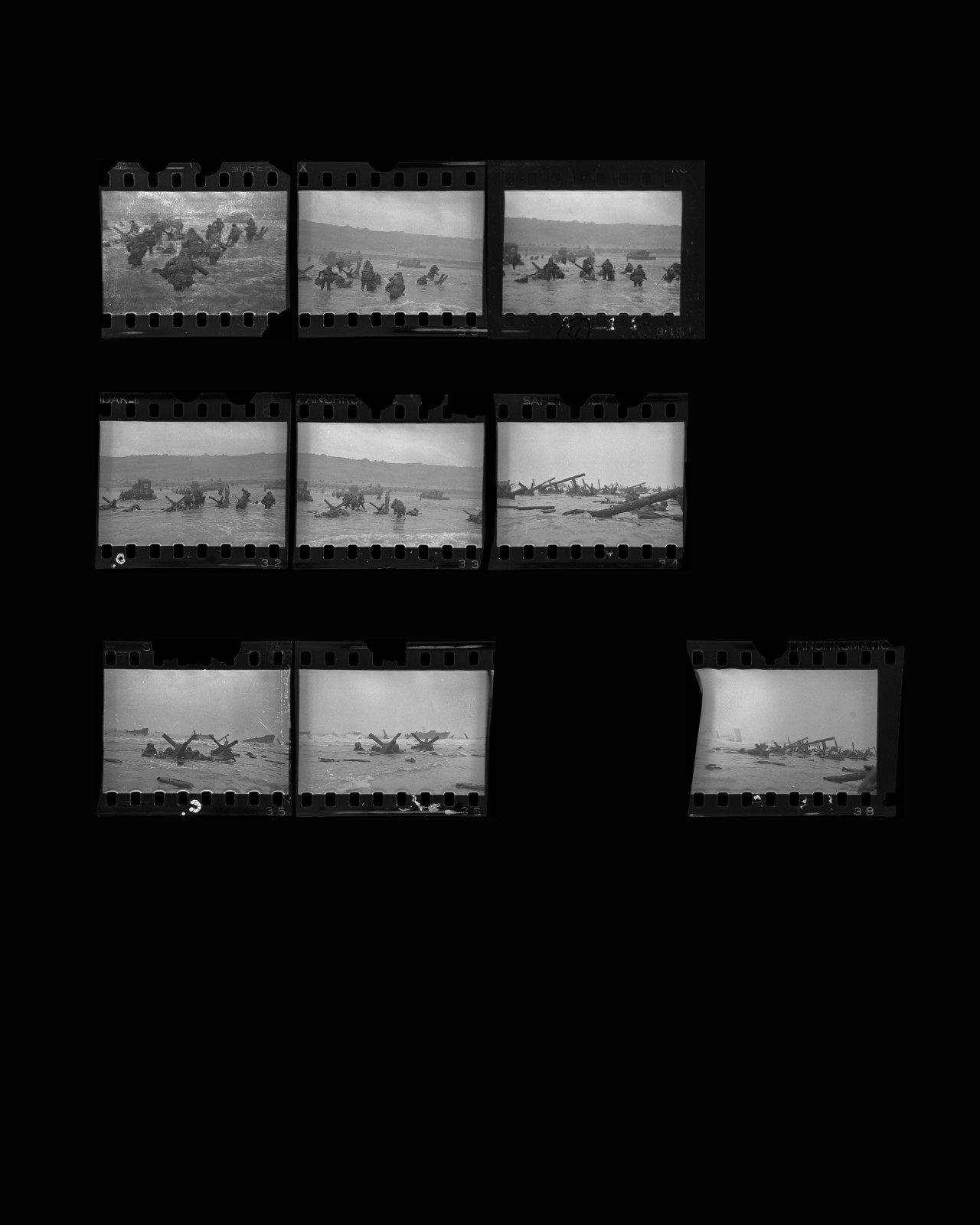 Morris was a part of Magnum since the very beginning. Speaking to Magnum in November 2016, he said, “I knew all the founders of Magnum, even before they knew each other. I met Robert Capa just when the war in Europe was starting. He had already covered the Spanish civil war. It was from Capa that I first heard of his dream of a picture agency. It was not called Magnum, it was just an idea that photographers should benefit more from the sale of their work.” 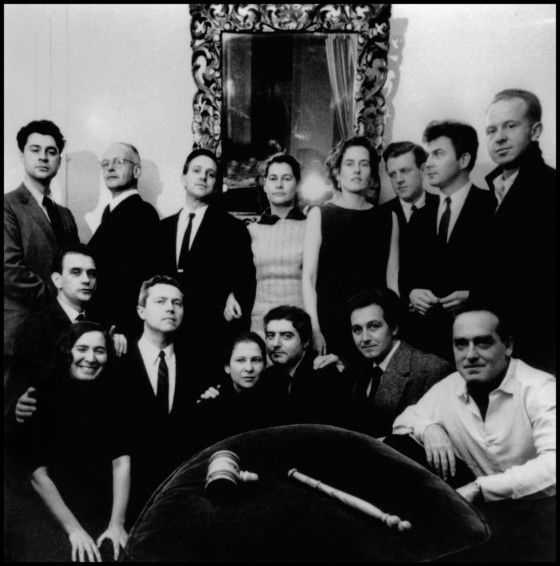 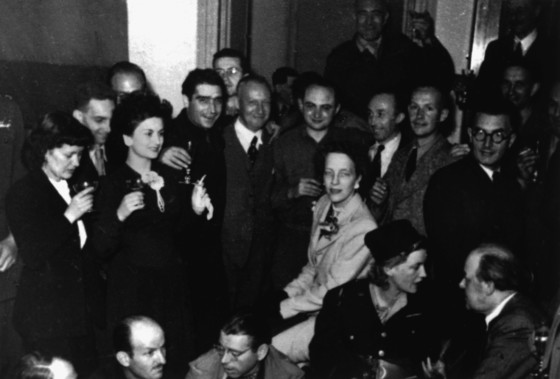 Magnum Collection A party given in the home of the Paris Vogue editor Michel de Brunhoff, shortly after the liberation of Paris, brought together John Morris (rear center with glasses), on his right Robert Capa and (...)
on his left (wearing glasses): David "Chim" Seymour. In the foreground, wearing a uniform, is Lee Miller. Behind her, a man in a tweed jacket, Henri Cartier-Bresson. August 27, 1944. Paris, France. © Magnum Collection | Magnum Photos

The seasoned photo editor maintained an active interest in the world of photojournalism right up to his death. During a 2016 interview with Magnum, he mused on how the industry changed throughout his long tenure within it. The devoted Quaker and lifelong pacifist questioned the purpose of war photography, especially within today’s media landscape.

He gave some sage advice to photographers working today, to help guide them in becoming better at editing their own work: “In journalism, one first looks for the meaning, the truth that’s involved in the image – does this image show something important? Is it true or false? The composition, the form, which is more of an aesthetic question, comes second. The ideal picture for a story first has to have meaning and secondly, hopefully, to have form – good composition. Good composition takes the eye to the focal point.”

In this short clip of John Morris by Marco Bischof, shot at his home in the mid-1990s, the seminal photo editor remembers the early days of the Magnum Photos agency and how Robert Capa coined the term ‘Generation X’.

The Magnum agency will sorely miss Morris and our members would like to pay their deepest respects to John Morris and his family. On hearing of Morris’ death Magnum’s CEO David Kogan, released the following statement:

“John Morris played a huge part in the early years of Magnum. He was Robert Capa’s picture editor at LIFE on D-Day, sent Capa and John Steinbeck to Russia for Ladies Home Journal and then was appointed Magnum’s Executive Editor in the 1950s. His career spanned 80 years of photojournalism. He was also a charming and vigorous man who never lost his enthusiasm or interest in the agency. He lived to see Magnum reach its 70th anniversary as he reached his 100th birthday. He will be missed by all who knew him and everyone who believes in the legacy of Magnum Photos” 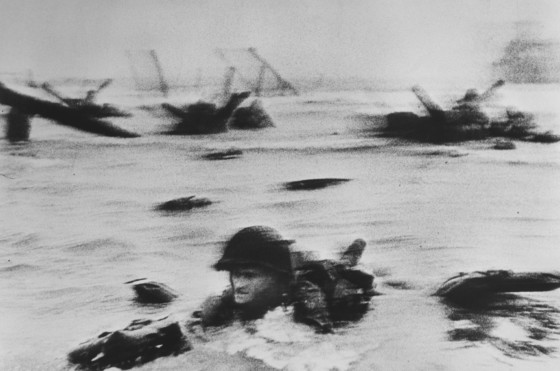 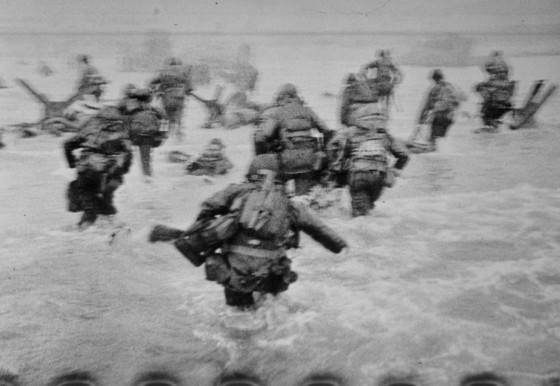 Magnum photographer and the agency’s current President, Thomas Dworzak said: “He was part of the founding family of Magnum. He called Capa his Hungarian brother and should always be remembered as one of them. In our 70th year especially, as we’ve looked back at the early days of the agency, we have been reminded once again of just how instrumental he was.” 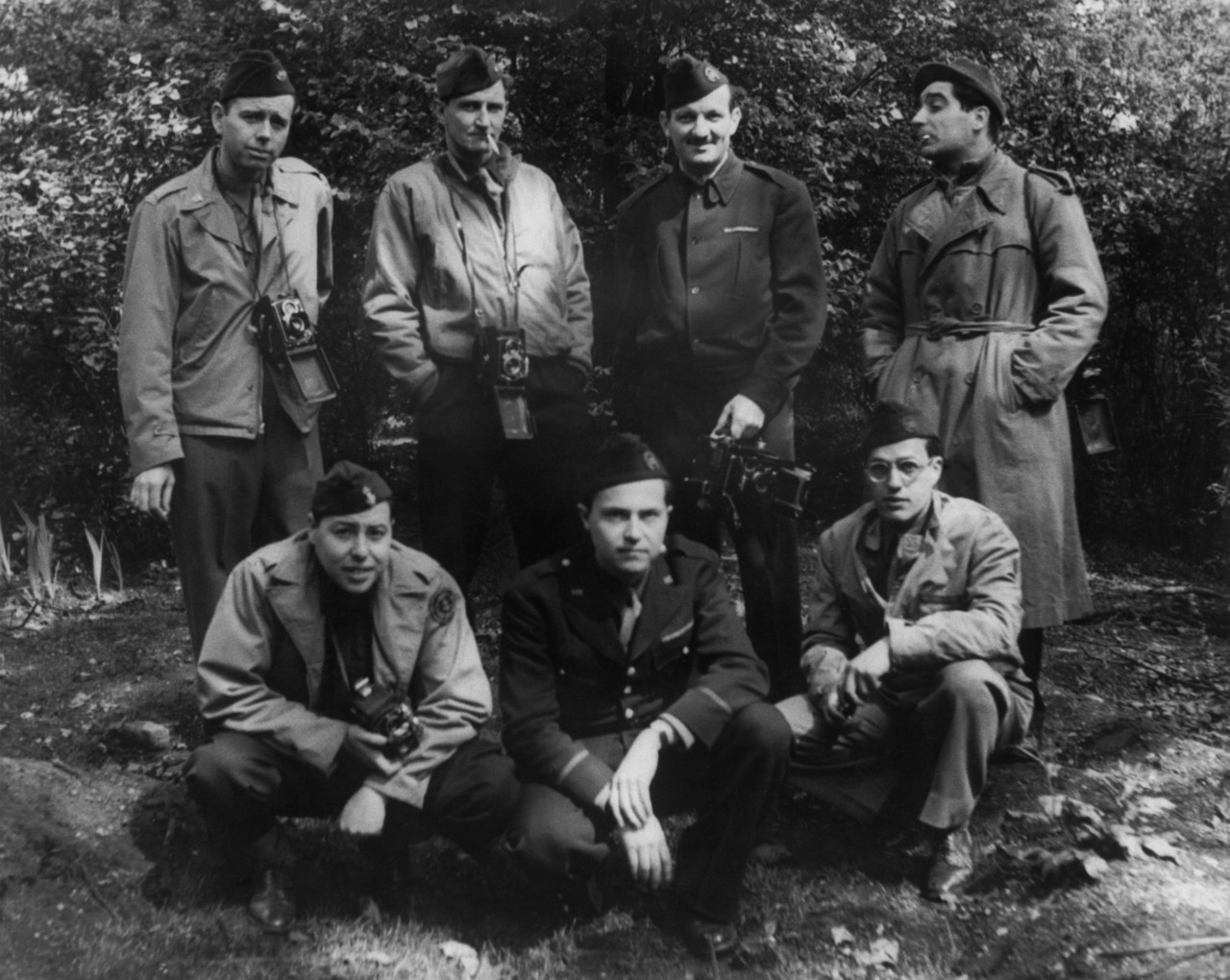 “I have fond memories of John for many reasons, of course for his lifelong contribution to photography and to Magnum New York during his time there. On a more personal level, he was instrumental in putting me in touch with Henri Cartier-Bresson after recognizing my failed attempts to communicate with Magnum Paris in English at a time when the then Paris Bureau Chief spoke no English. With such thought and generosity are lifelong changes made. I’ll surely miss him.” “My parents Yvonne and Philippe Halsman, and I, knew him well. He came twice to the Jeu de Paume Astonish Me Philippe Halsman exhibit in Paris, 2016. The first time I gave him a private tour, guiding his wheelchair, he laughed heartily at all Philippe’s back stories. The next day he came to my lecture. I gave him the mike at the Q & A so he could recount a funny Philippe Halsman story.”

“John was a remarkable person, whose intense energy, kindness, openness, and positive attitude to life were an inspiration to me and many others.  I admired his knowledge of photography, but the clarity of his commitment to political causes and democratic values continues to resonate with me. He will be missed and remembered well.”

Jinx Rodger, George Rodger’s widow, wrote about her friendship with Morris, which first began in 1947:

“We first met in 1947 when I was just out of University and looking for a job.  With my parents blessings,  and fired with ambition, I spent my baby-sitting income on a two day Greyhound bus ride to New York and found a small room at the midtown YWCA.

Job hunting began. The only name I had in my address book for New York, NY, was that of a retired professor of journalism who had an interest in the new art of photography,  just making its mark in New York galleries. I knew nothing about photography – I didn’t own a camera.

But I had ambition – and curiosity – both of which led me to tramping around the big city in search of a job that would feed both. By persistence and good fortune, I found a typing job with a small picture gallery which led to an introduction to – the New York world of photography.

In 1947, John Morris was the picture editor of Ladies’ Home Journal – the biggest selling magazine of the day. I went to his well attended lecture about photography, met the leading picture people of the day and the following week applied for a job  with the LHJ as a typist.  Within a year I had advanced slowly upwards ad found myself  ‘fit for travel’ and editing a series of articles about young people the world over.  My ‘business’ travels fired my ambition to travel myself.

I followed John Morris to Paris where he was now a serious editor. He and his wife had bought a small farm in the country and kindly invited me to come and practice my French and feed the chickens.

Throughout all the years we have stayed in touch and followed the ups and the downs of ‘our kind of photography’. John’s writings and lectures on documentary photography have inspired generations of young folk to ‘get the picture’ and his name will be remembered for his enthusiasm and devotion to photography.” 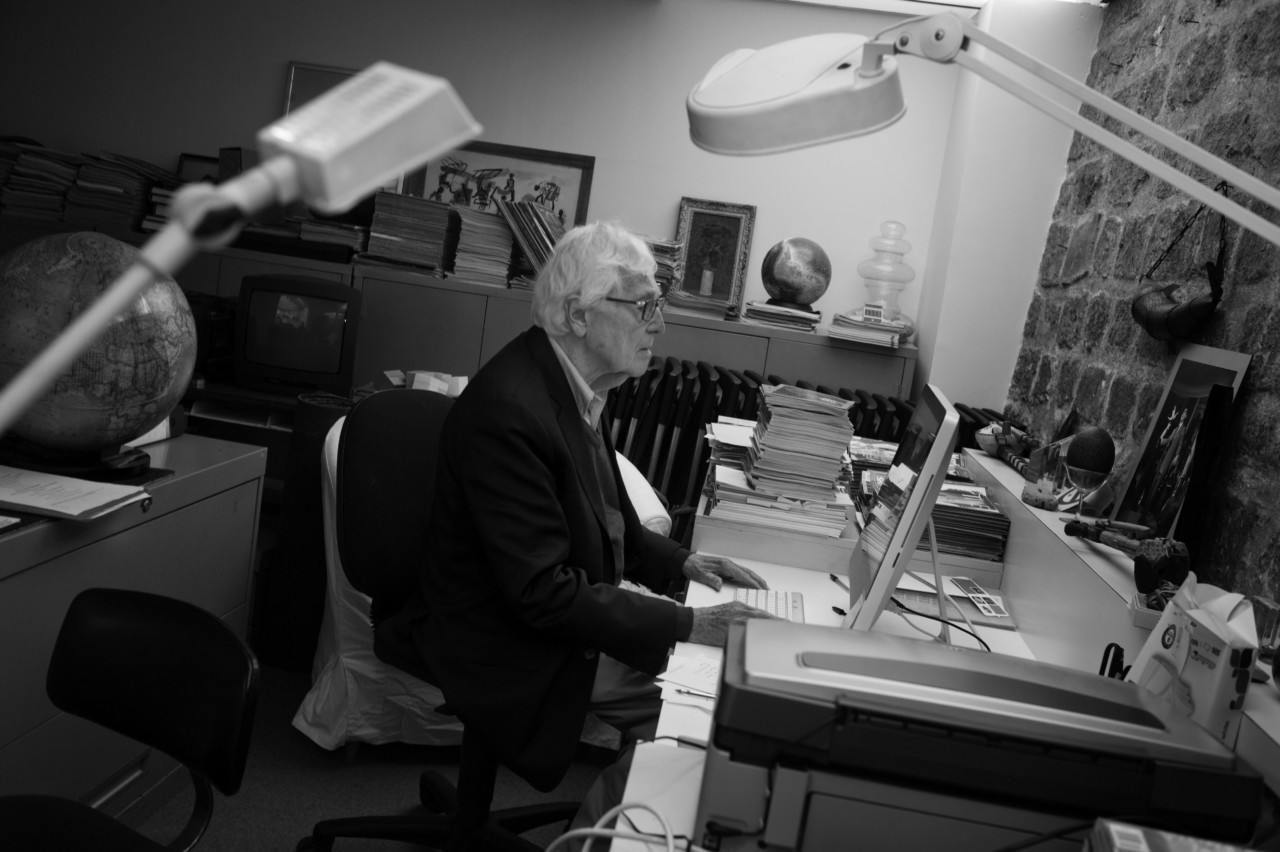 Abbas Photo editor and writer John Morris at home in Paris, France. In front of his computer is a photo of Robert Capa. © Abbas | Magnum Photos

“I spent many years in Magnum during John Morris’ tenure. He was a very important figure in our history and much appreciated.”

“I always thought that John would survive all of us.” 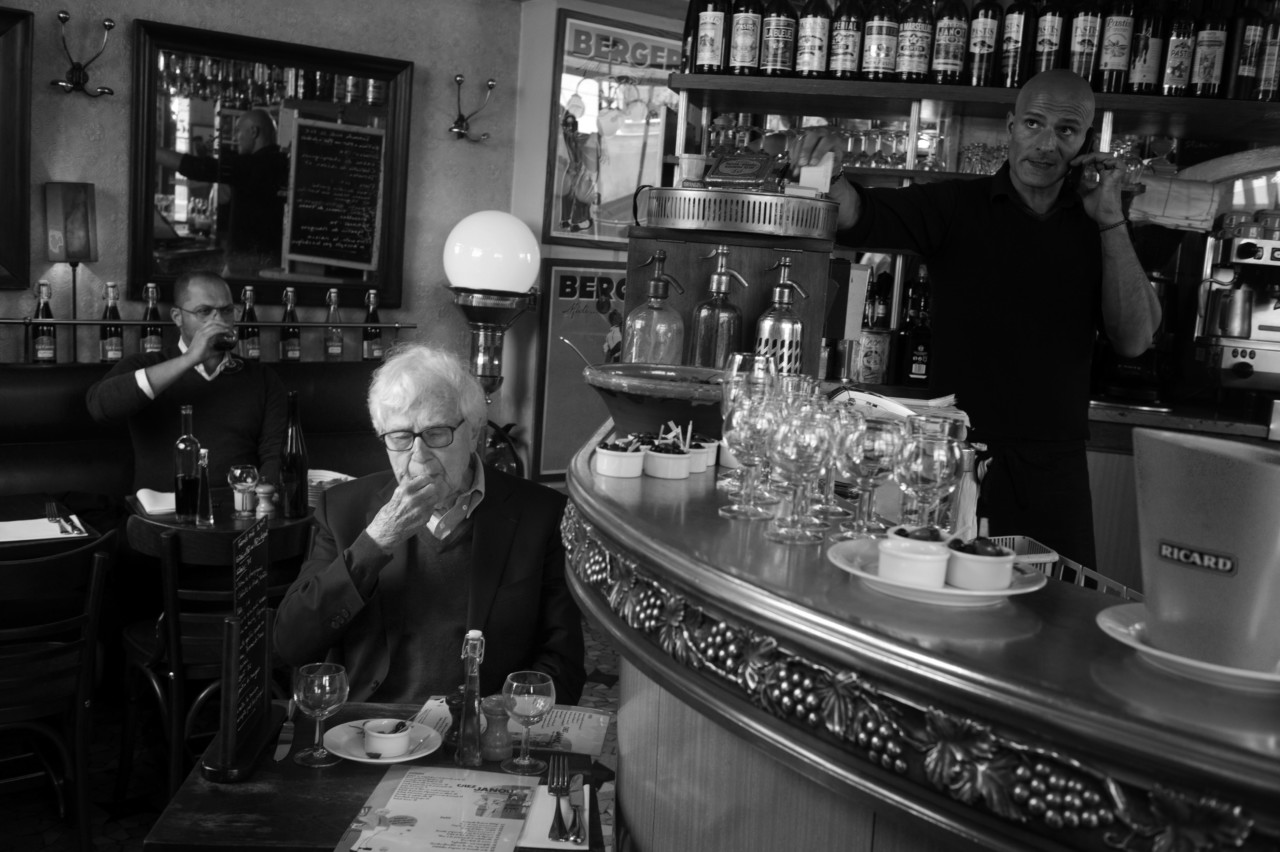