Reflecting on the Magnum photographer's lesser known works in color 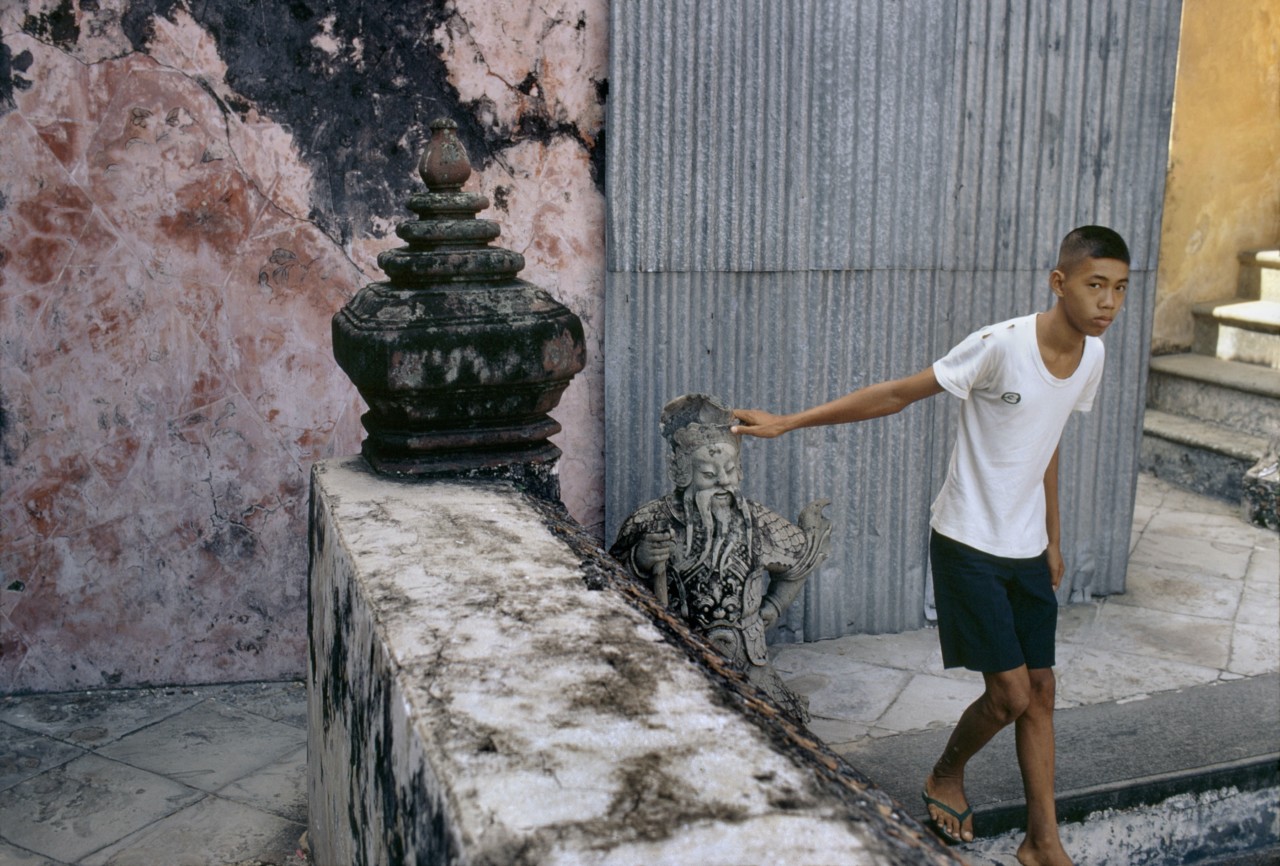 Color palettes have the power to evoke particular emotions. This is perhaps most famously conveyed by Pablo Picasso’s famed blue period, where his use of cold colors conveyed his emotional turmoil and melancholy. Even though the color photographic process Autochrome was introduced as early as 1907 by the Lumière brothers, and Kodachrome became available in 1935, black-and-white was seen as a more truthful medium for the documentation of events, as well as being cheaper and faster to process. Until the 1960s many photographers shunned color completely, in favor of its monochrome predecessor. The new medium was at first rarely considered valid, let alone art. Renowned American landscape photographer (and lover of aesthetic rules) Ansel Adams once said of a William Eggleston photograph: “If you can’t make it good, make it red.” Indeed, Magnum co-founder Henri Cartier-Bresson is recorded as once telling Eggleston: “You know, William – color is bullshit.”

René Burri, an early member of Magnum, whose work was published regularly in magazines and newspapers like Life, Look, Paris-Match or the Sunday Times, forged a great career in black-and-white and has not really been primarily associated with vibrant color photography. He is well-known for his portraits of famed figures like Pablo Picasso or Che Guevara, and for his work in various corners of the world: his documentation of the building of Oscar Niemeyer’s modernist city Brasilia, and his iconic single images – like Men on a Rooftop, São Paulo (1960), taken from a skyscraper, depicting high rise buildings with delightful symmetry and precision. While color images tend to bring a viewer to the here and now, monochrome photographs have the knack of evoking mystery, and the past – moments that have disappeared. Burri’s first feature, ‘Touch of Music for the Deaf’, depicted deaf-mute children at the Zurich Institute of Musical and Rhythmic Education. While color would have arguably added more realism to the series, translating literally what Burri saw, the black-and-white aesthetic seems to display and reflect a sense of melancholy, and austerity. 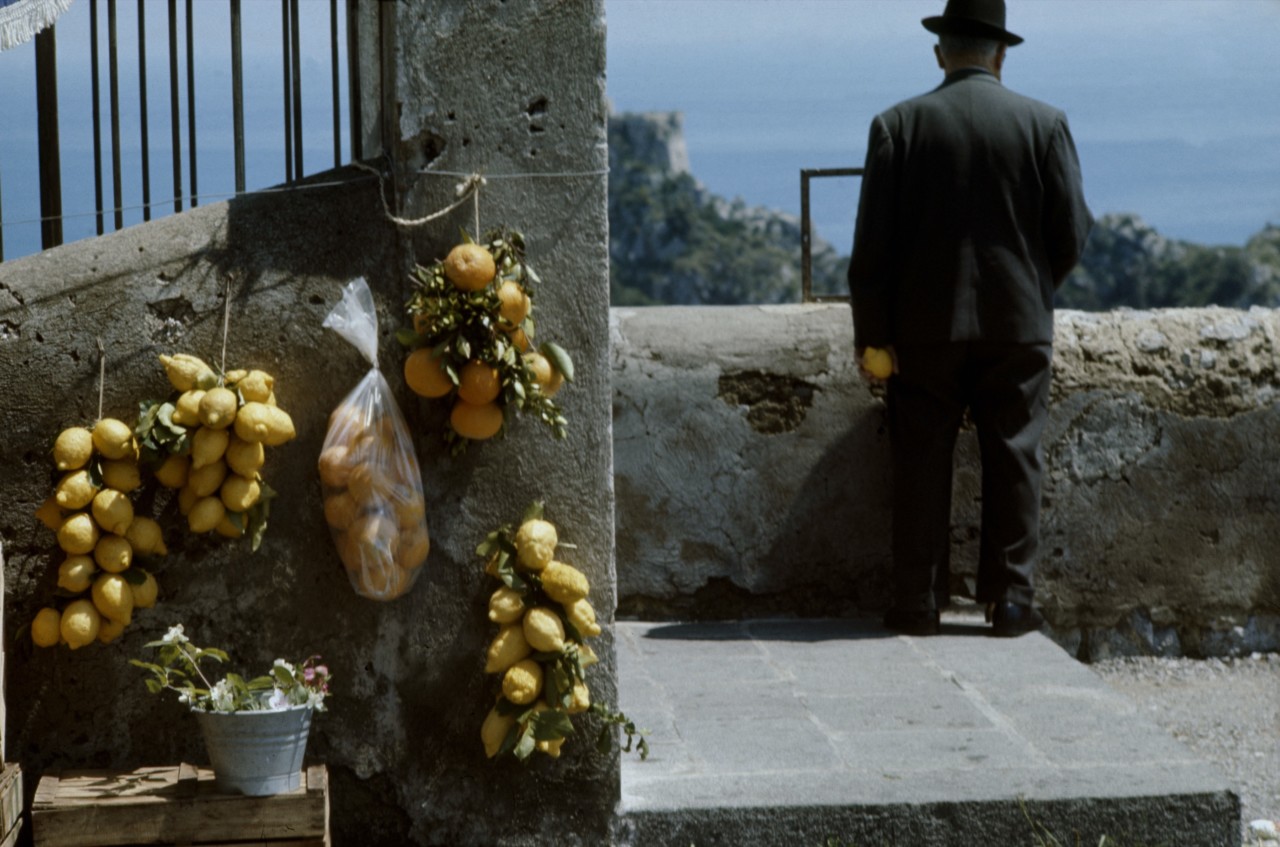 The recent exhibition, ‘Les Autres’, at Galerie Bildhalle in Zurich, uncovered Burri’s joyful, somewhat more abstract gems, showing the artist’s more colorful side. Burri wrote – in the book Impossible Reminiscences (a collection of color works he curated) – “I have led a life as a photographer – one in black and white and one in color.” Not uncommonly for Magnum’s members, and photographers working commercially at the time, Burri carried at least two different cameras with him – loaded with alternative film types. Burri only revealed his color photographs to the public in the 1980s, in his ‘One World’ exhibition, 30 years into his career – a collection that expressed his experiences not only through photography but also through drawings and collages. Color in some of his work seems necessary. Burri’s image Albisgüetli, Zürich (1980), included in both Impossible Reminiscences and in the recent Zurich exhibition, depicts a funfair, and captures the familiar yet magical spectacle so vividly, with the strong structure and composition that defines all of his works. Burri turned these images into two big photo installations called “MegaPhotoMobil” and included sound and lighting to make the merry-go-round experience even more vivid, so that you could hear the music and the cries and laughter of the children, and feel almost as if you were there. “It is a photograph of great force,” says Mélanie Bétrisey, assistant curator in charge of the René Burri Collection at Musée de l’Elysée in Lausanne, Switzerland. “The framing and the point of view of the photographer is quite astonishing. Close to people, and to reactions. We almost have the impression of hearing the laughter, the music, the cries of the children.” 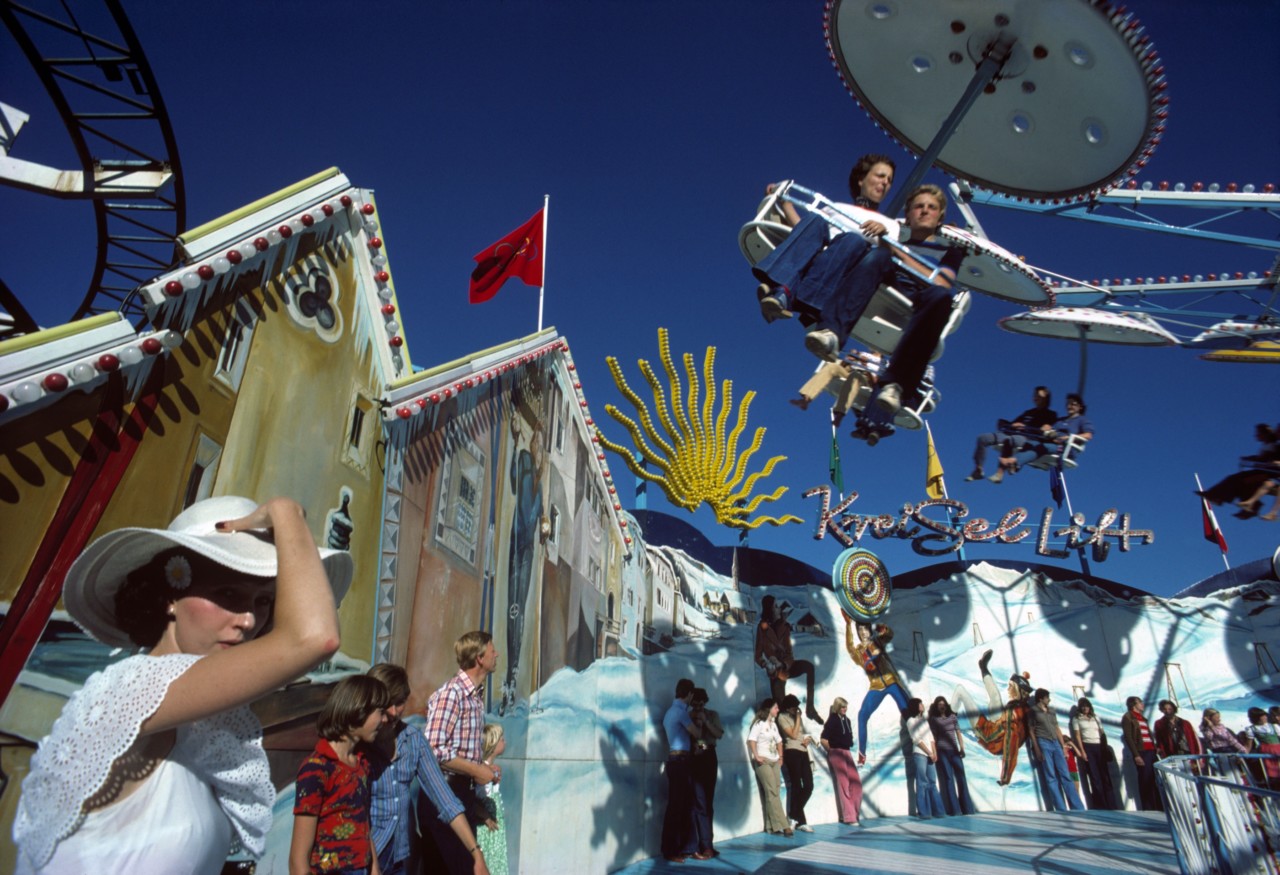 This is an image Burri might never have taken in black-and-white. “It was a very colourful and fun atmosphere, and I am sure that if he could only have taken this in black and white, he wouldn’t have taken the picture,” Clotilde Blanc Burri affirms. Blanc Burri is René Burri’s second wife, who has been working on his archives since the creation of the Fondation René Burri at Lausanne’s Musée de l’Élysée in 2013. “The interest for this picture is color.” She points  to another image to as only having been possible in color: Chicago, 1971, in which the ‘don’t walk’ letters boldly stand out in red from other elements.

Perhaps the color works of the photographer tell us more about his personality. “They have a different language than his black and white photography. There is something more emotional, less calculated about them, I find,” Mélanie Bétrisey, curator and supervisor of the René Burri Collection, says. 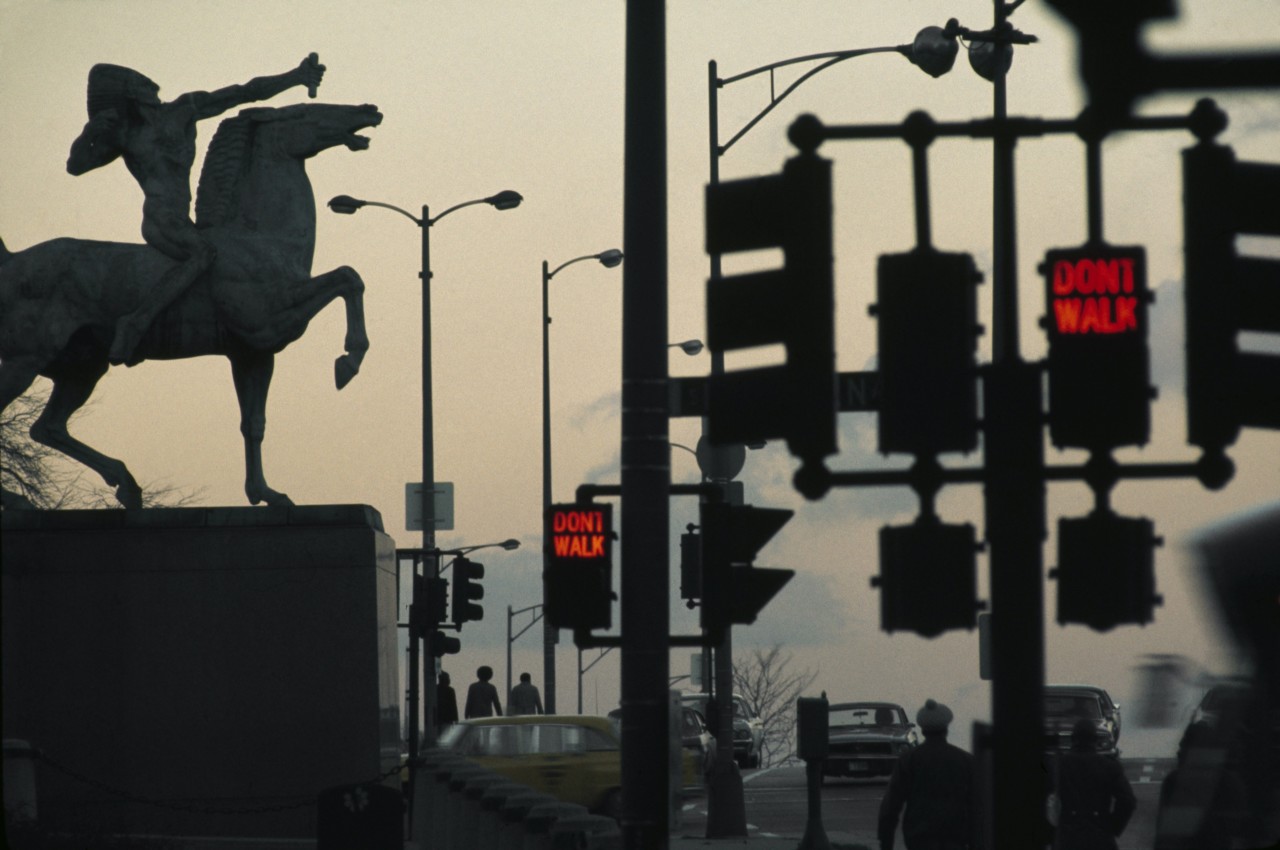 “René Burri learned, during his training at the Kunstgewerbeschule in Zurich, the fundamentals of color with Johannes Itten. Although we know Burri for his black and white photography, he worked with colour very early on, particularly in the drawings that he made from his childhood,” Bétrisey adds. The Musée de l’Élysée has at least 177,000 of his color slides in its collection.

Whether shooting in black and white or colour, Burri was known as being very empathetic, curious, and extroverted, making friends wherever he went. “He spoke English, German, French, Spanish, and Italian, and had a lot of curiosity for people,” Clotilde Blanc Burri tells Magnum. “Sometimes, he’d see something he’d want to shoot, and he’d be off.” He liked to anticipate and had a sense of observation but also of adaptation, she recalls. “That was important for his work, as he was always very quick. If he saw there was a picture to take, he would drop everything.” He’d immerse himself for hours when there was a story he thought was worth shooting. 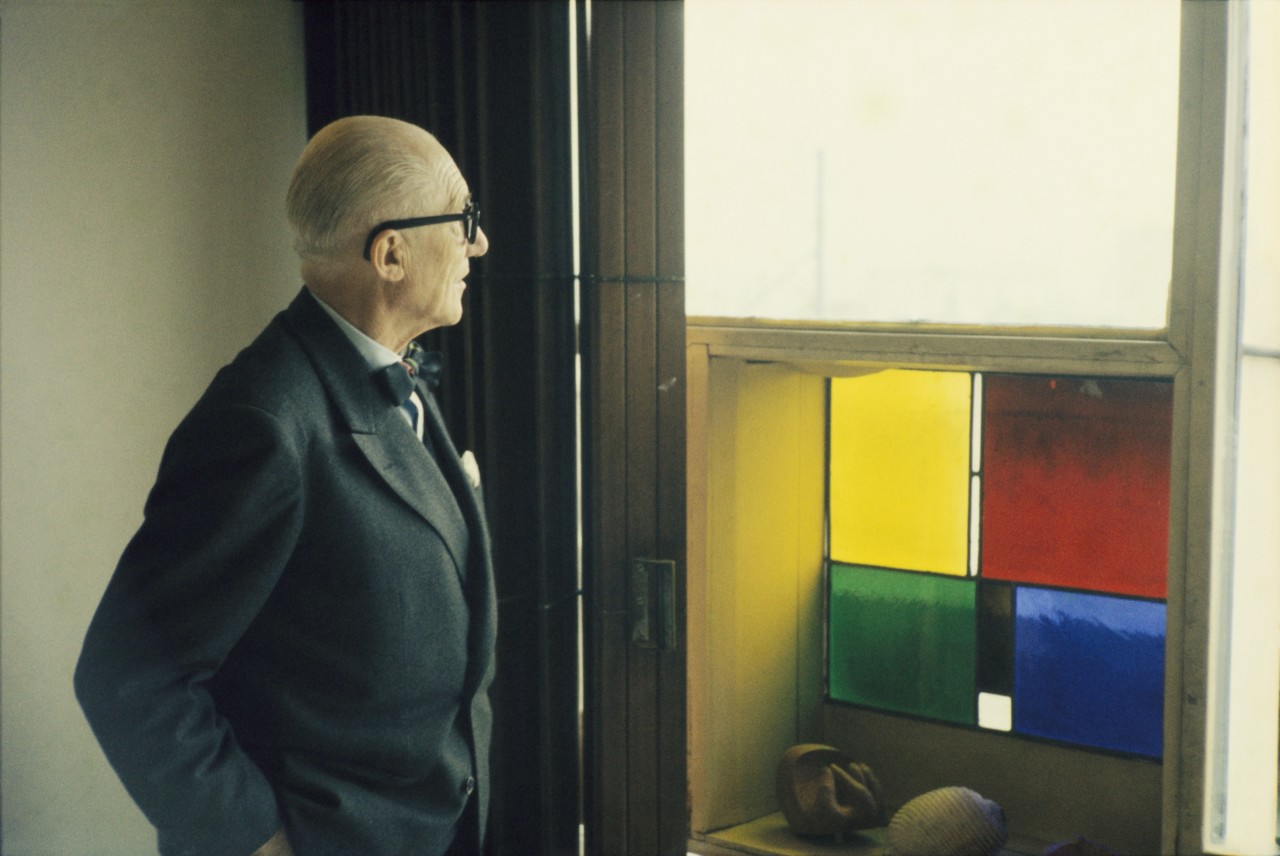 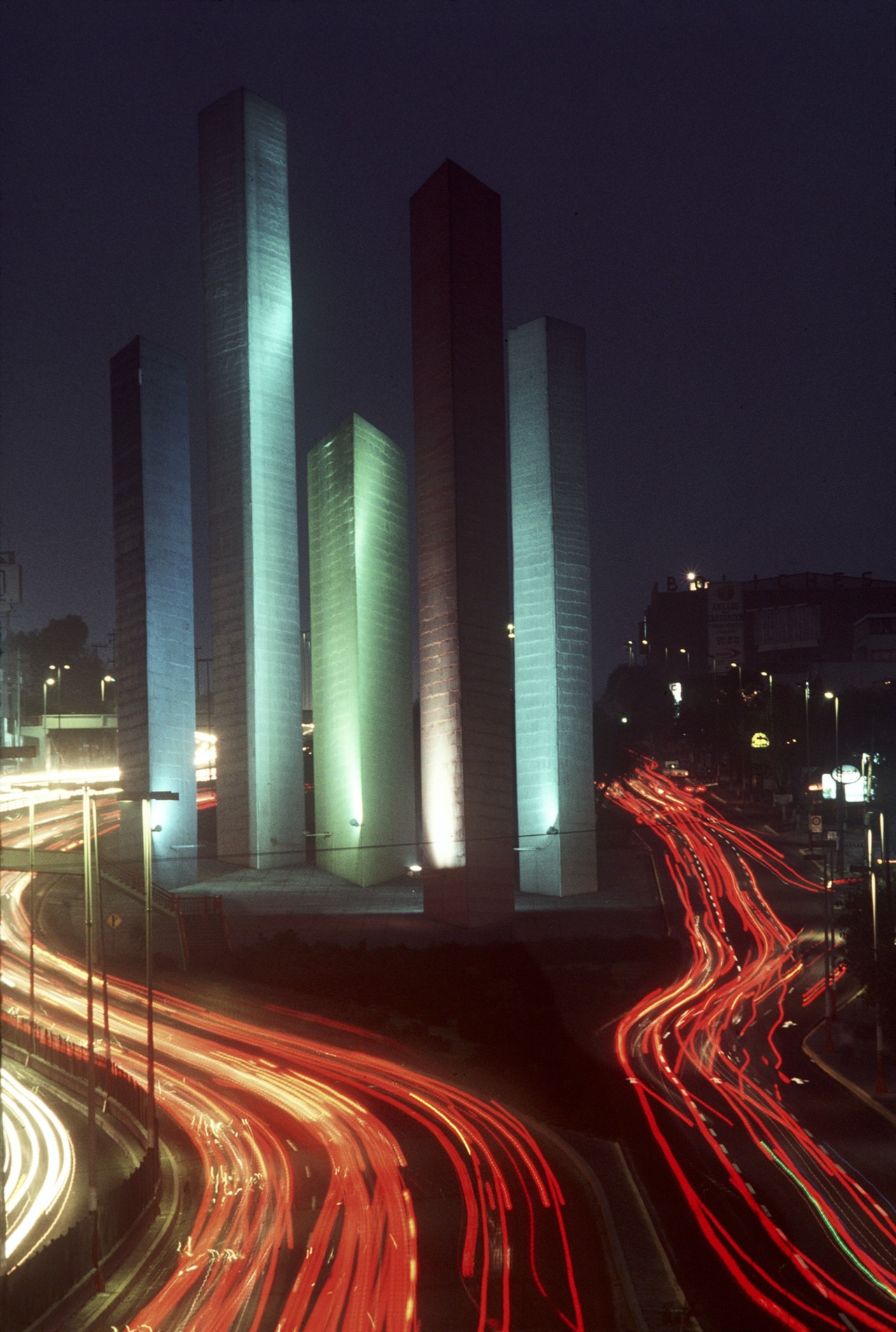 Burri once said: “After I left the photography class, in which all we did was photograph coffee cups under the light, I had to chase after my images. How to position the device when everything was moving? When people walked, when everything galloped in front of me? I shouted at them to stay still! This lasted until I started moving myself, until I managed to swim with the tide. Then, when I did, the action was taking place on the other side of the street! Snaps are like taxis in the rush hour – if one isn’t fast enough, someone else will get them first.”

Burri’s thirst to discover the world was insatiable. One of his schoolteachers once told his class “Zurich is great. But you must leave.” That advice stayed with him forever, as Clotilde Blanc Burri points out. He went on to successfully capture some of the most important political events of his time as well as the quieter scenes of everyday life around the world. 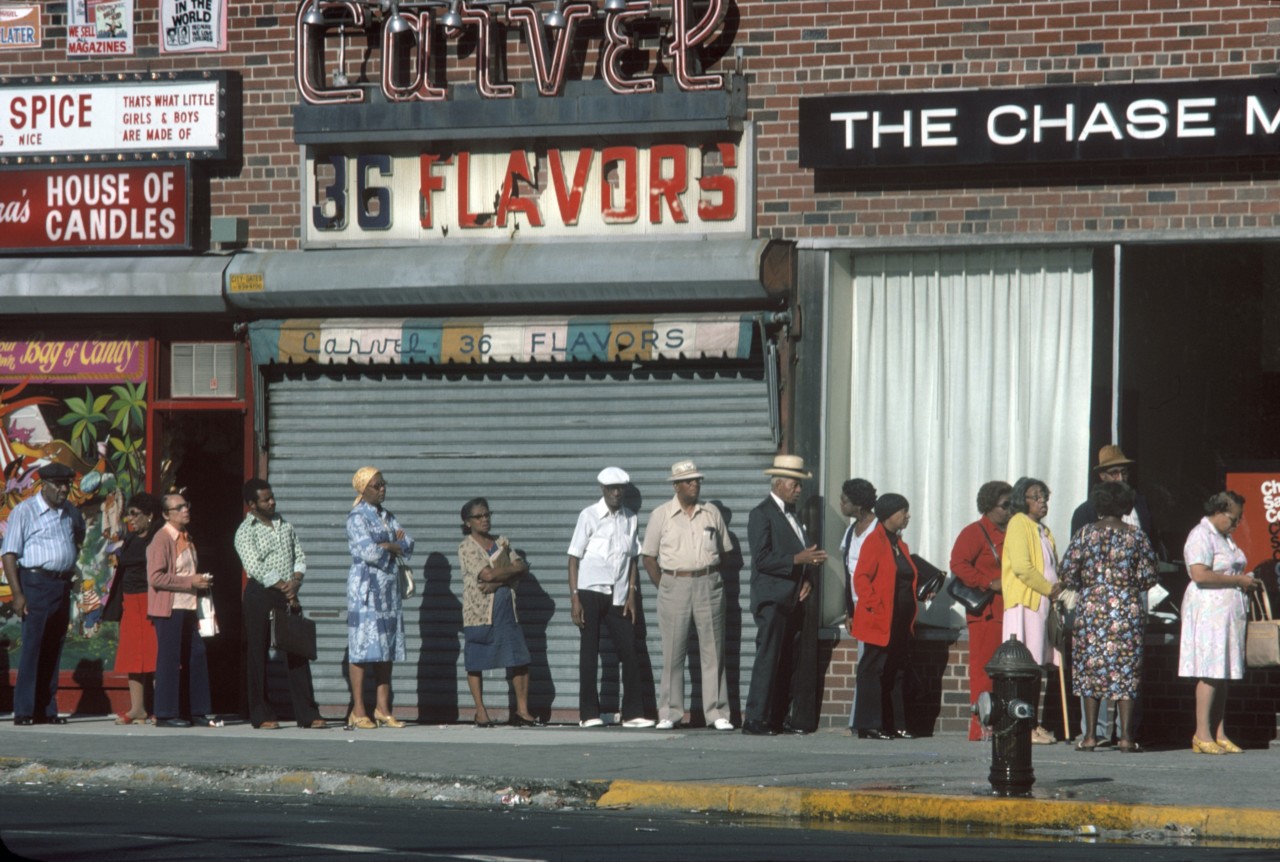 The color palette of his images in Japan are extraordinary. One of the better-known, made in Tokyo in 1980, is of cross-dresser Akihiro Maruyama, portrayed in a purple taxi that seemingly matches the subject’s purple eyeshadow. The driver’s arm is reaching out and lighting the subject’s cigarette. The subject stares at the camera, as if posing for Burri, framed by the car window. It is an image so successful for its composition, color and closeness. “It is a complete atmosphere,” Clotilde Blanc Burri points out. “There are just two main colours: Purple and white.” Then there is the image, also from Japan, from 1980, of a young woman beautifully framed by a window in a red colored train carriage, displaying a glare that might reflect distrust.

In his pictures from Tiananmen Square in 1989, taken during the bloody crackdown on student demonstrators, the dramatic event is emphasized with red – a color of course steeped in symbolism, conjuring associations of blood, sacrifice, danger and revolution, but also of course the color most associated with China. 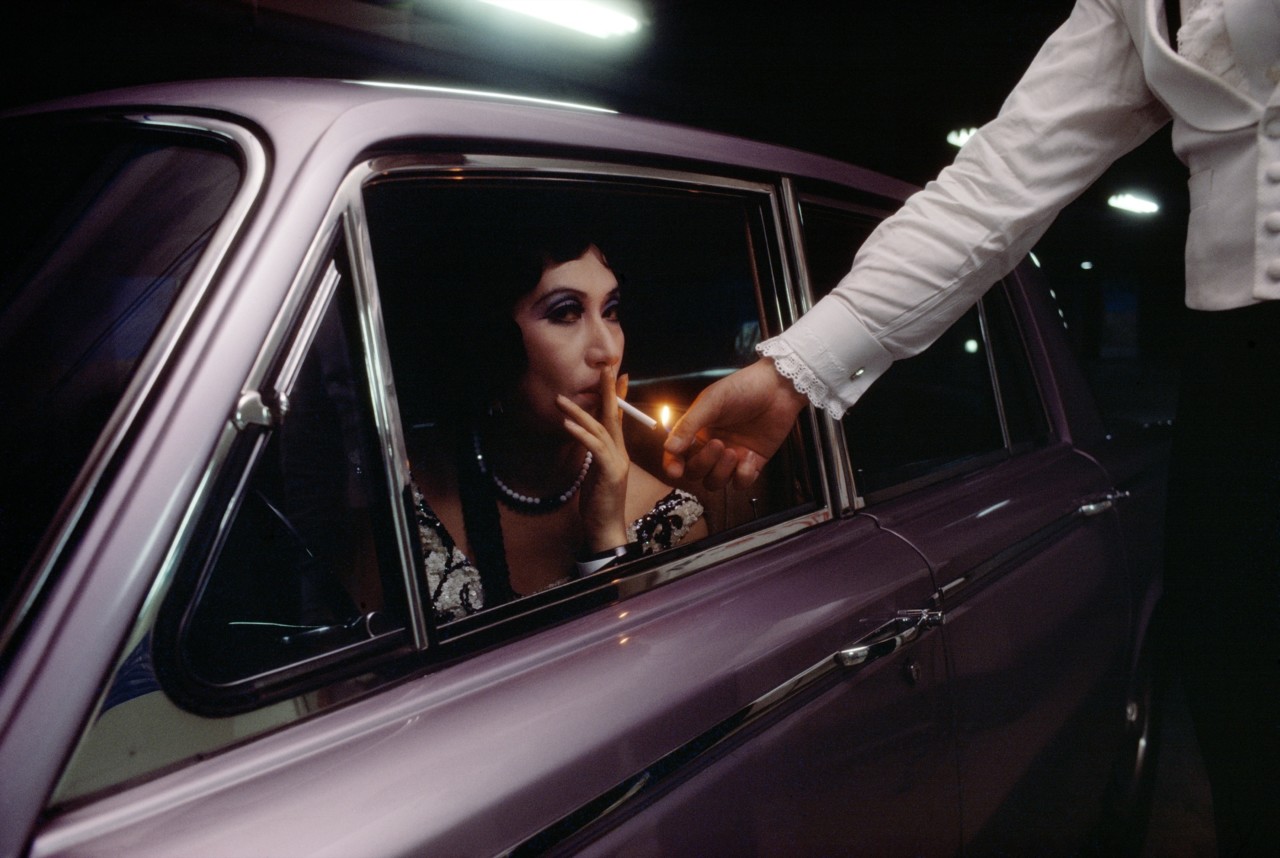 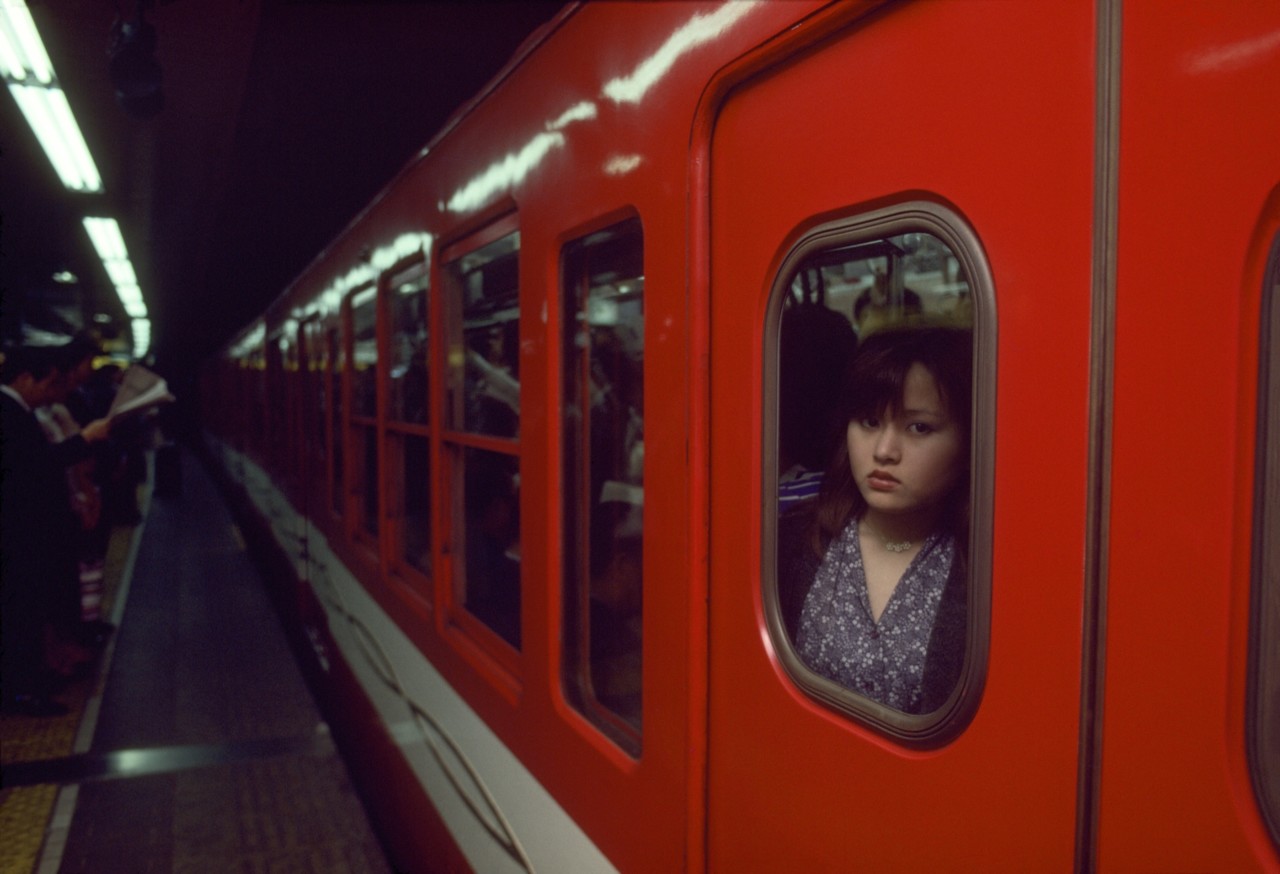 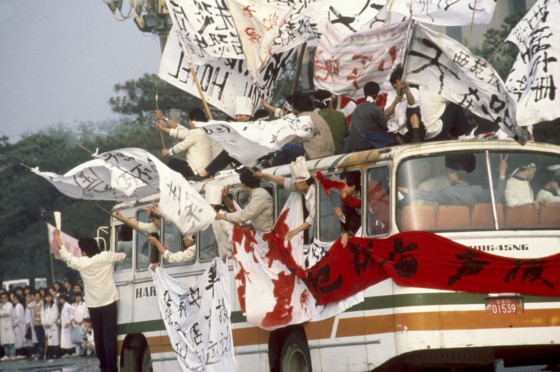 While he took plenty of wide-angled shots, Burri also took more playful, close-up images that show his subtle humor and observant eye, like the one of the back of the legs of a woman in bright red high-heeled shoes, white plasters stick out at the back. “This picture was an exception. He saw it and took it quickly; it was right in front of him. It wasn’t his style, he didn’t usually shoot close-ups, but of course it reflects his sense of humor,” explains Clotilde Blanc Burri. 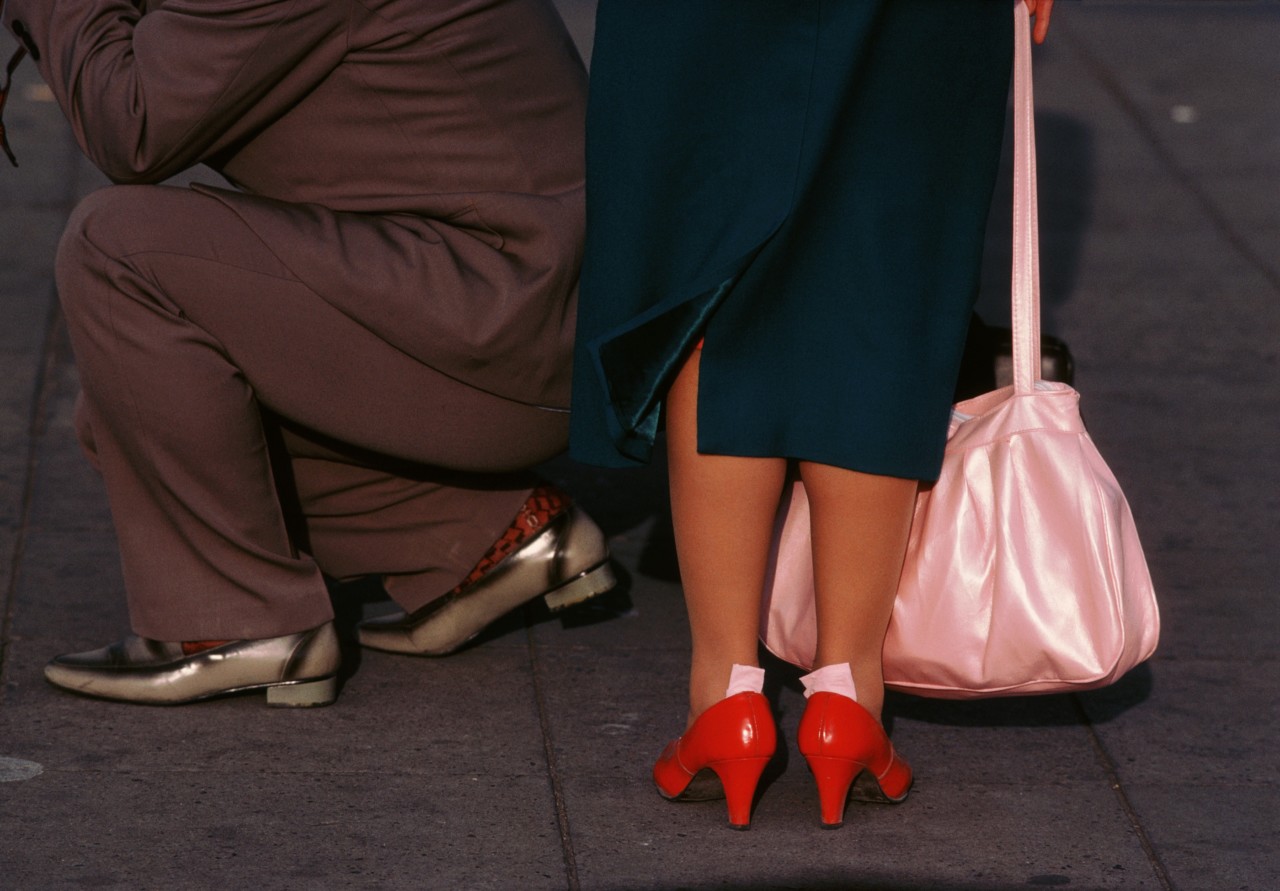 Burri was also a sketcher, filmmaker and painter, and delved into architectural photography. His 1976 shots in Mexico of San Cristóbal’s stable, designed by modernist Mexican architect Luis Barragán, reflect his mastery of light and shadow, and geometric compositions. “The particularity of the work he did on Barragan’s architecture are these large flat areas of color that structure the image” Bétrisey reflects. “I find that for once it is very similar to his practice in black and white. A play of diagonal, shadow, light, angle. Perhaps the work of this great architect stands out more intensely by combining these two practices: the play of flat areas and depth of field of color with clear diagonals, the play of lines.” Burri became a full member of Magnum in 1959, after joining in 1955. Burri would take at least 36 photos for one final image, and editing was an important part of his work. “He’d lay out his contact sheets and he would very quickly see the story, see which one was good. There was no hesitation,” Clotilde Blanc Burri, recalls, adding that he would, sometimes, ask for her opinion.

Earlier on in his career, Burri would have to send negatives over to Magnum Photos in London. There was an editor who would make a selection of around 10 pictures. Thirty years later Burri came back to these images and re-edited them himself. Clotilde Blanc Burri says he spent half of his life shooting, and half of his life curating the images. “He had parallel stories that didn’t matter at the time to the newspapers, but that now mattered,” she says. 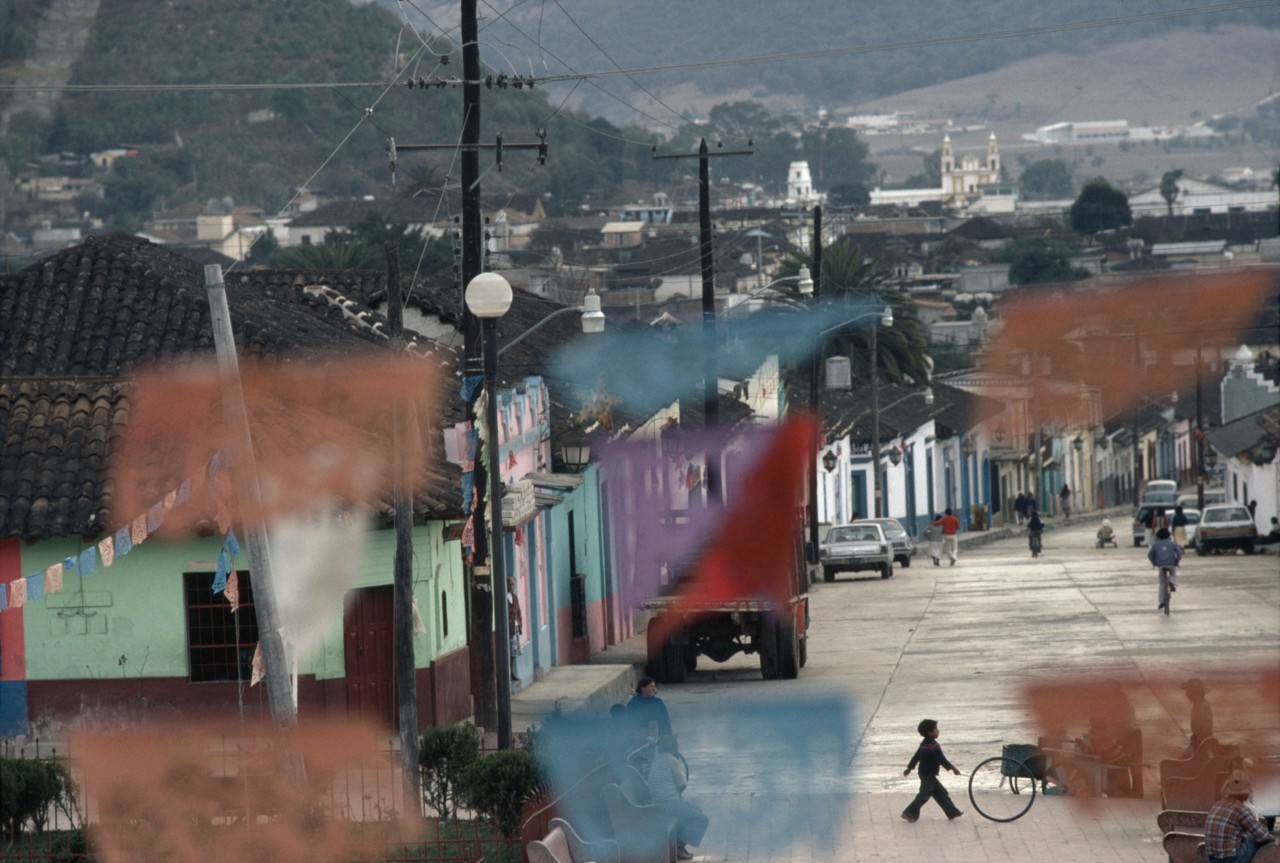